Shortly before 10am, we left Holywood in Belfast and cycled to the harbour to get our ferry to Scotland. In the city centre, we met Harry, a local cycling enthusiast and he kindly showed us the way to the ferry port. The ferry reached Cairnryan after 2.5 hours on time. After the arrival in Scotland, it rained continuous and the only dry place we found for a short break was a small bus station. In the evening, we had to build our tent while it was raining for the first time on this trip.

After an extremely windy and rainy night, the sun woke us up in our grubby tents. Thanks to the community of Warmshowers, we found Boris who gave us a place to stay for our time in Glasgow. Since we met Boris directly after work at his place, we did not have to rush and started our day a bit later than usual. In a Pub that used to be a bank, we did our lunch break. Boris welcomed us kindly and we felt like home instantly in the spacious apartment.

Since a long time we talked about visiting a whisky distillery when we finally reach Scotland. Therefore, we chose Auchentoshan in Glasgow, which is one of the only distilleries with a triple distillation. During our tour, we learned lots of new information about the traditional craft and were allowed to degust a bit of the expensive liquor. In addition, we visited a cathedral from the 12th century in the third largest city in the UK and the largest city in Scotland. The adjacent old cemetery (Necropolis) we visited afterwards. We ended the day with a local beer in a traditional Pub. 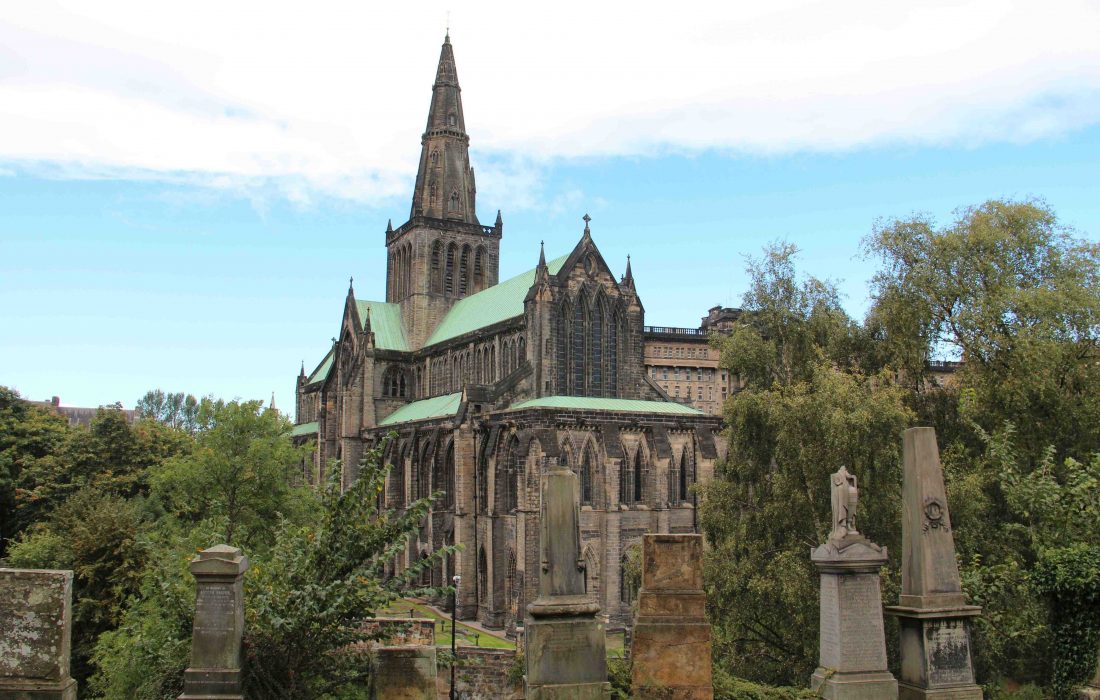 It took a while until we got out of Glasgow and the following long-distance cycle track led us along a calm river. Soon, we reached rural areas and therefore Loch Lomoch (Loch means lake in the Gaelic language), which is the largest lake in Scotland. During a break, we met two British men from the South who were cycling for almost two weeks in Scotland.

Today, we cycled from the lowlands into the highlands and had to climb the first hills. From Glasgow, there is a long-distance hiking path called West Highland Way, which is 154km long. This trail passes through beautiful mountainous landscapes and finishes in Fort William. We saw many hikers and outdoor-enthusiasts who currently hike this trail. Shortly after Tyndrum, we pitched our tents right next to the trail.

The pass road led us through fabulous and at the same time sparse landscapes. We saw many tourists, by foot or by car and we cycled along the winding road. Before the road descended to Fort William, we experienced the first strong headwind in a long time and we did not have to wait long for the rain to pick up as well. In Fort William, we decided to change our route and to leave the Loch Ness alone for now. The new route should lead us away from the tourist masses and into the nature of the Cairngorms national park. 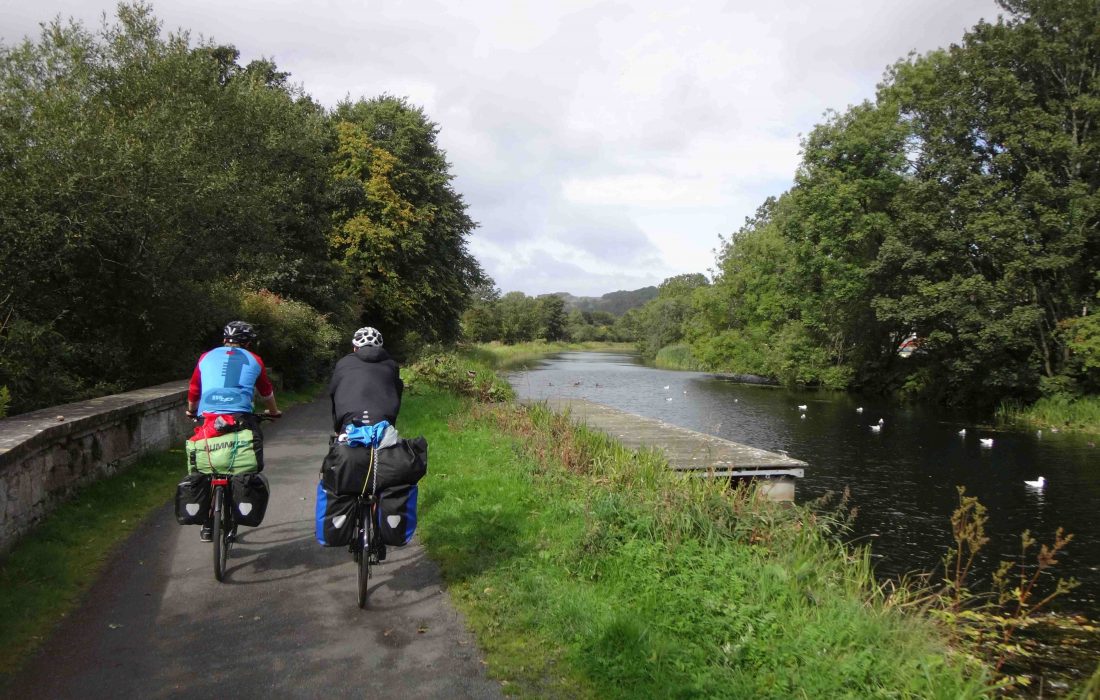 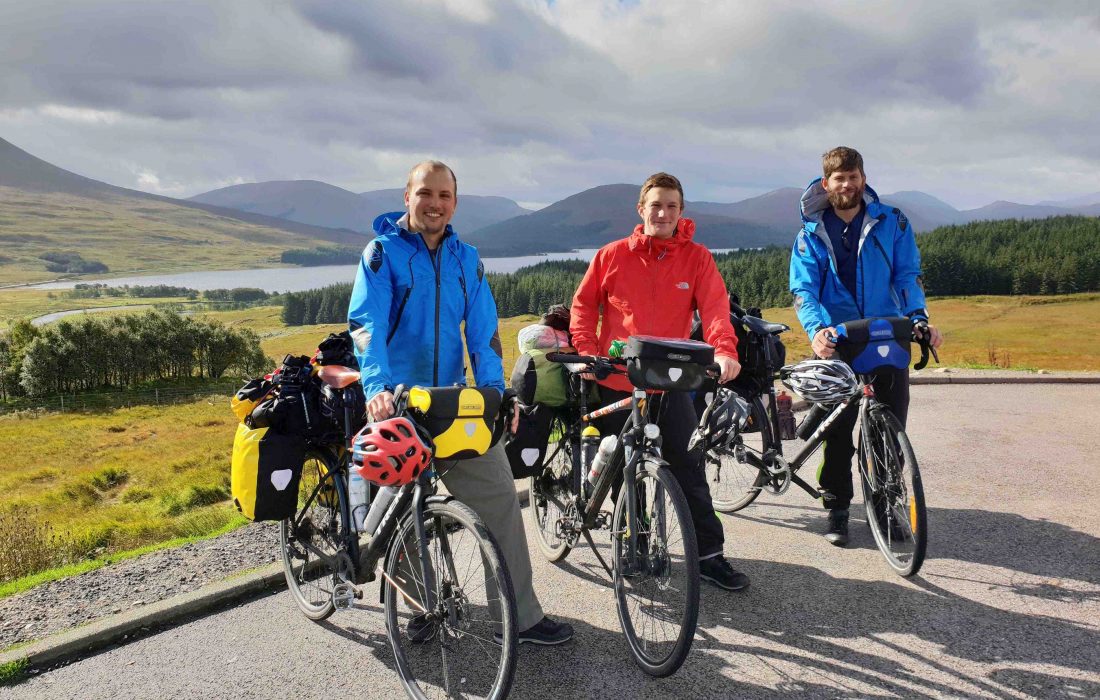 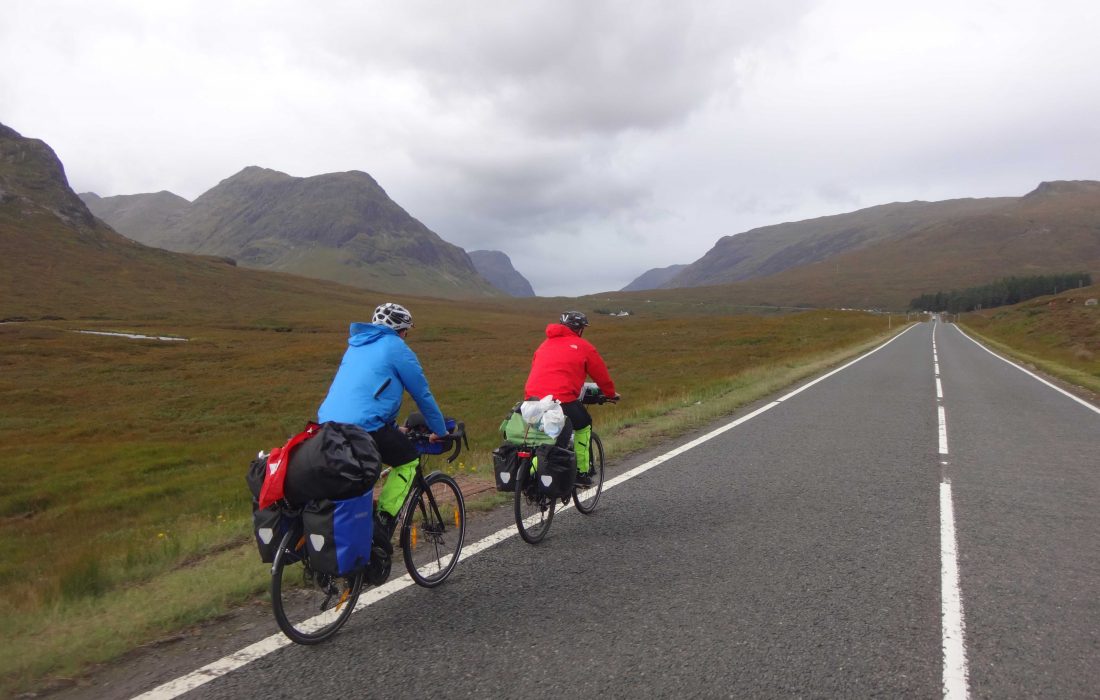 Passing beautiful, vivid landscapes and several lakes, we cycled into the Cairngorms national park. After a while, a racing cyclist overtook us with a competition number and we were wondering what is going on. A few kilometers further, we saw a food stand and realized that there was a local triathlon today. Thanks to Nikki and her husband, we were allowed to strengthen ourselves at the tasty buffet and had a nice conversation. In Aviemore, we searched for a nice campsite in the middle of the conifer forest to have a good starting point for a small hike the next day.

After a sufficient amount of sleep, we hitchhiked to Loch Morlich and started our hike to the surrounding mountains. Soon, the strong wind from the weather report, we read this morning before leaving the campsite, came true. On the ridge between the 600-700m high peaks, the wind blew around 80-100 km/h and the ambient temperature felt wintry. From the highest peak, we witnessed an interesting weather spectacle and saw the rain moving directly towards us. Back at the campground, we enjoyed a hot shower and relaxed in the tent.

Our adjusted route led us further into the largest national park of Great Britain. The many hills and mountains with sparse vegetation impressed us repeatedly. So far, we have not seen the expected ascents of the Highlands. Today, we were certainly challenged: Several steep ascents (parts more than 20%) had to be conquered against strong headwind and led us to the top of the highest pass of our journey. The highest point was the valley station of the Lecht ski resort, which lays 750 meters above sea level. After the rather modest ski resort, we pedaled further and searched for a campground in Ballater. 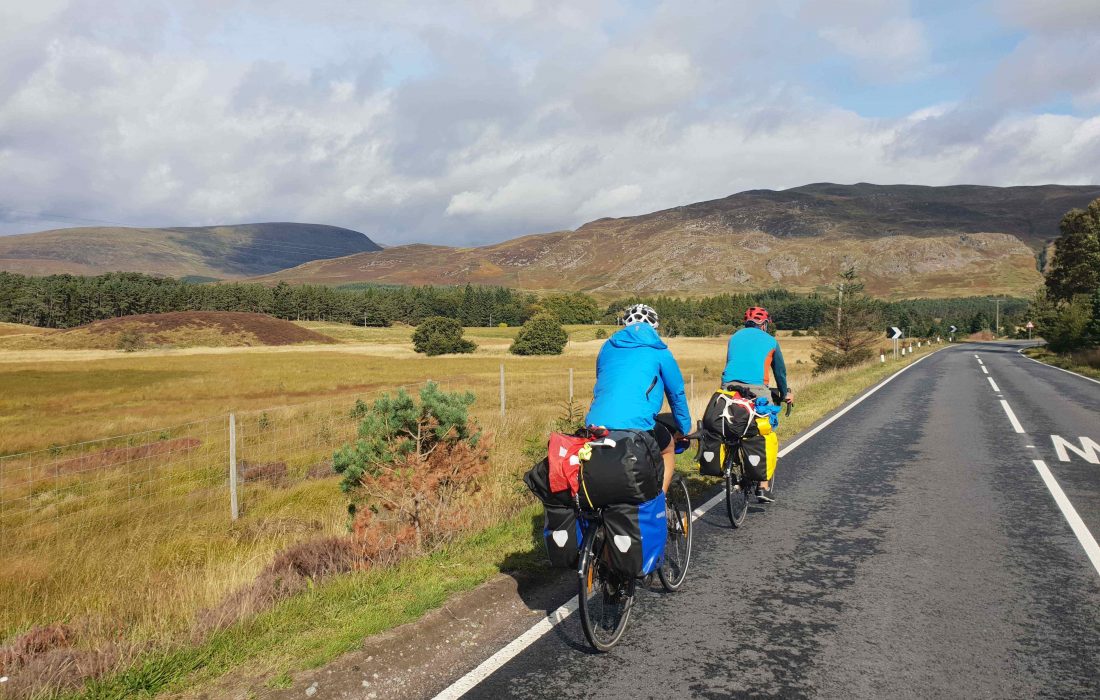 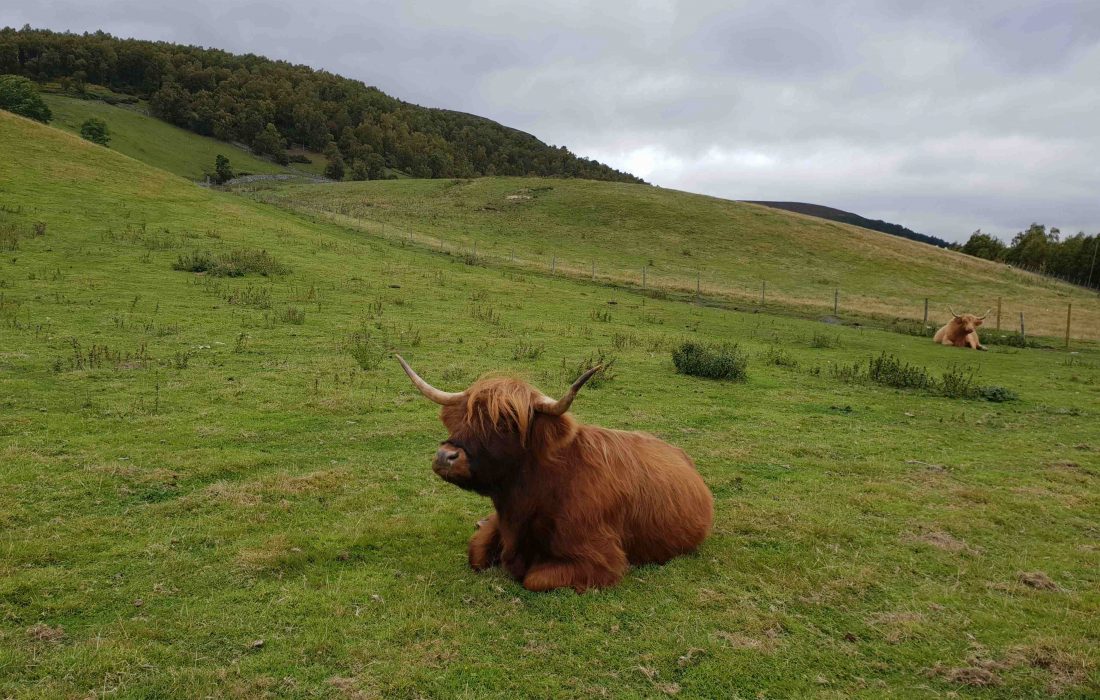 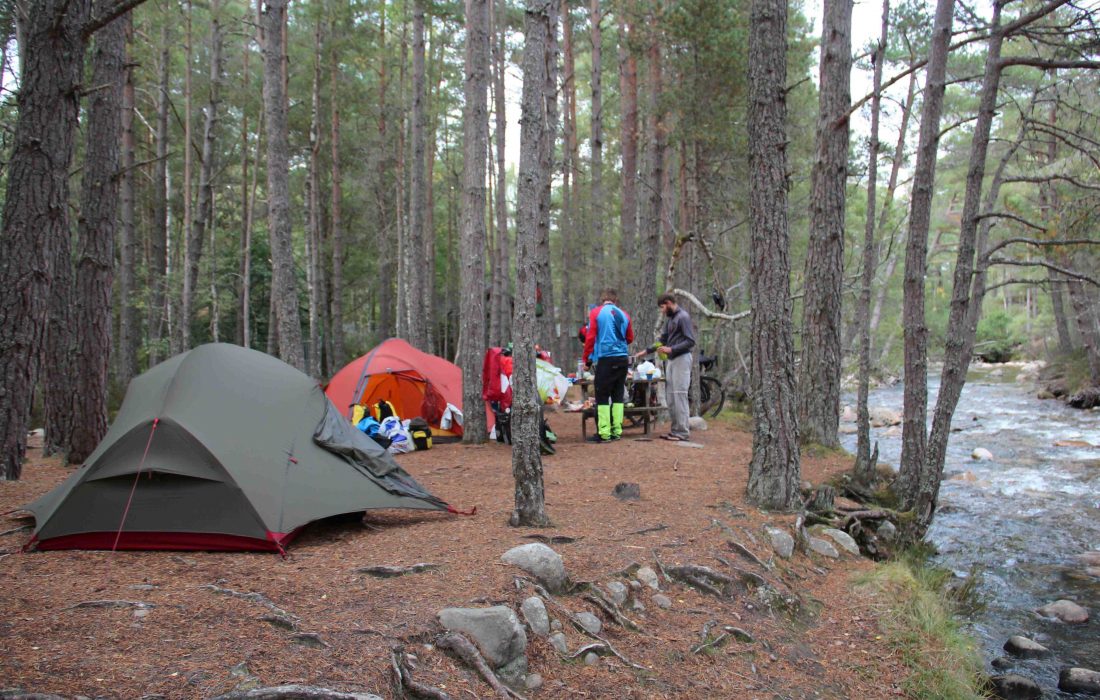 After a stormy night, it seemed like the weather was better again in the morning. During breakfast, it started to rain and only stopped shortly before the lunch break. On the way to the Scottish East coast, the wind got stronger and the closer we got to the sea. The wind whipped the rain in our faces and we tried to not lose our motivation with pain in our faces. Because of the catastrophic weather, we ate burger and chips in a restaurant. There, we heard of the storm Ali, which swept over Great Britain and Ireland.

The Dunnottar castle is one of the most impressing and fascinating ruins in Scotland and was our next destination. Due to the storm, the castle was closed and we could only view the ruins on the peninsula from far away. Later, the wind reached its maximum speed and we could hardly continue cycling. From time to time, we had to stop to not land in the roadside ditch, since the wind blew sometimes from the side and then from all over. On a side road, we reached the village Inverbervie in slow motion. While searching for a wind protected spot to pitch our tents, we asked a local if it is possible to camp inside the local playground. He said that nobody would be bothered. Five minutes later, we were still standing there, not sure what do to and the man walked passed us again. He probably had sympathy with us and suggested to camp in his garden. When we pitched our tents, he even brought us some self-made sandwiches. 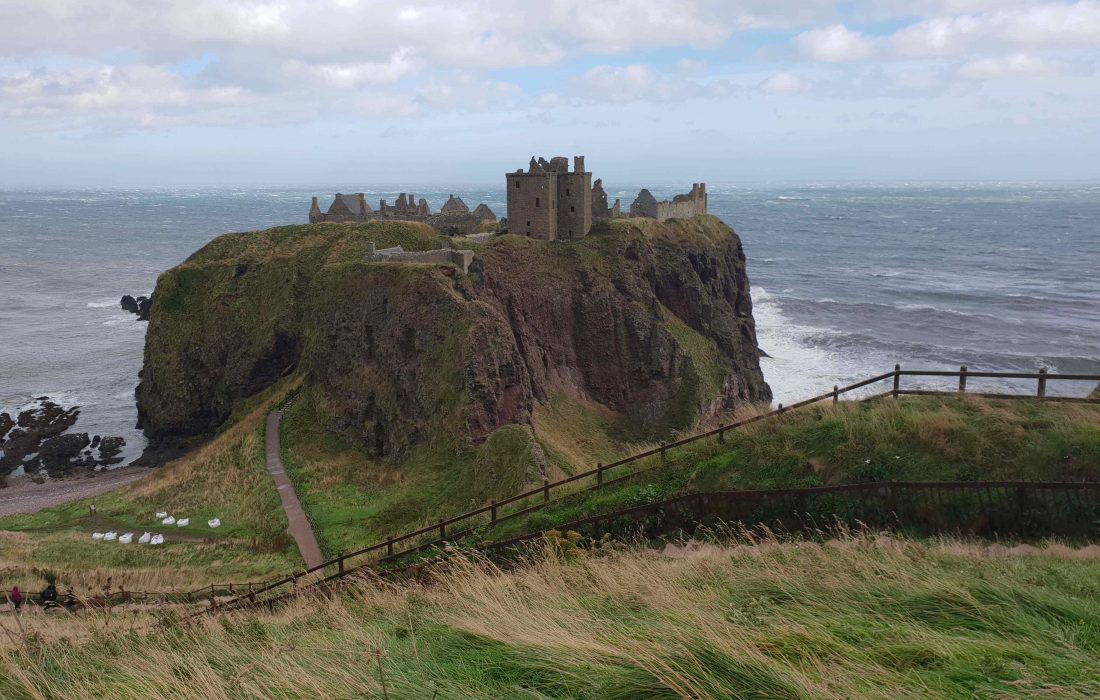 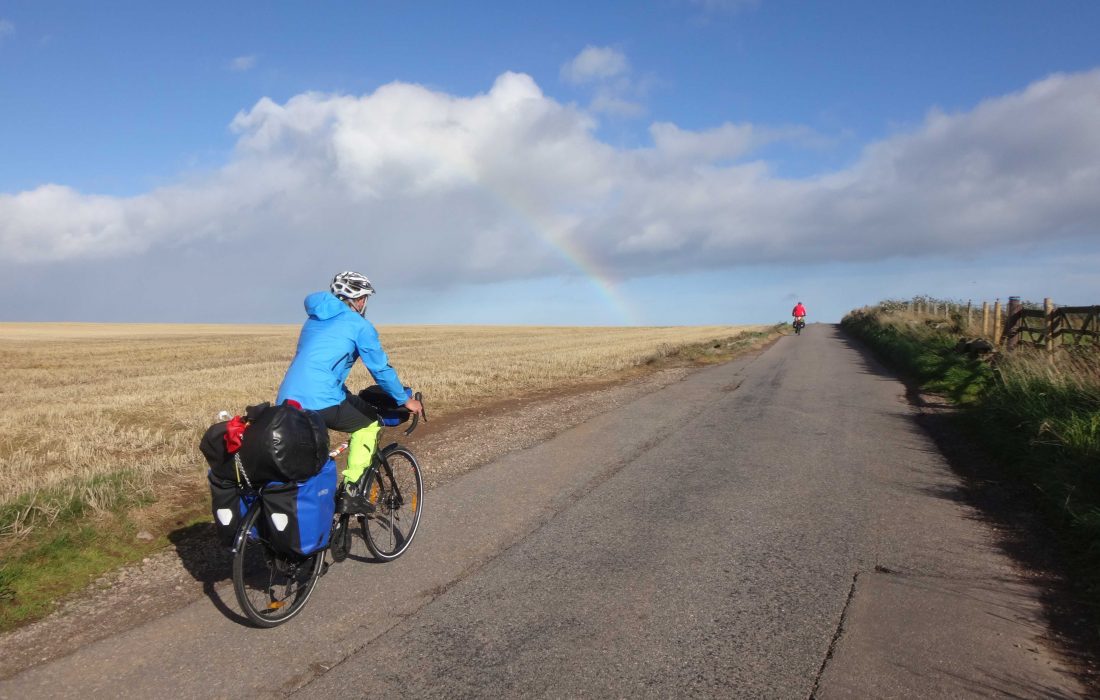 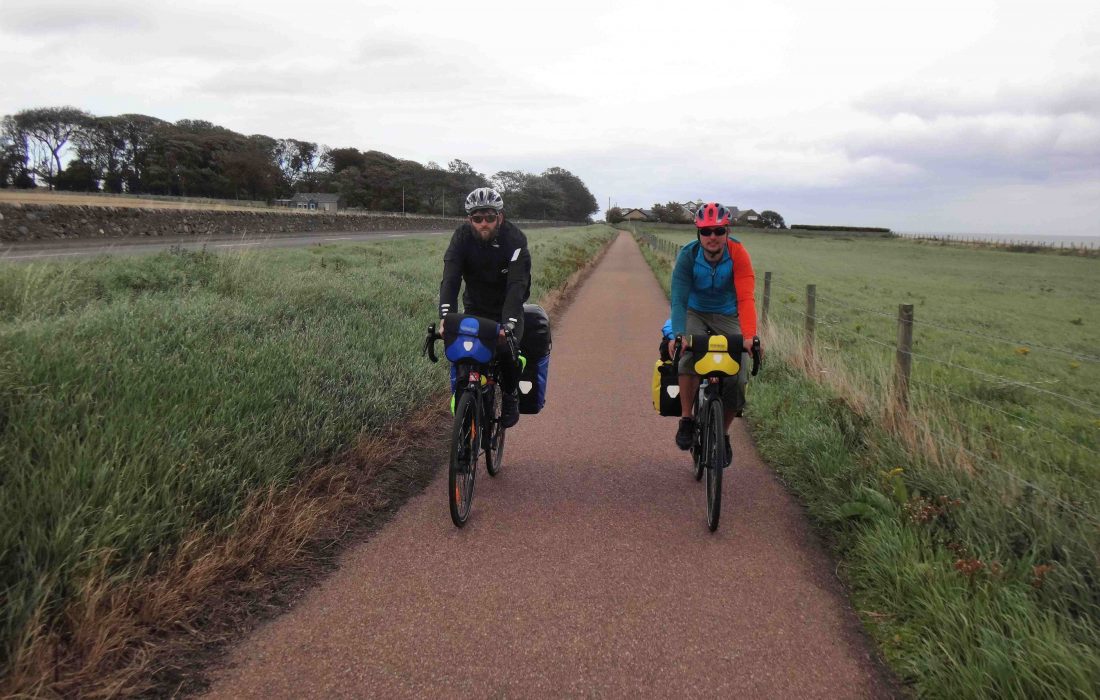 After a stormy night, we woke up to a blue sky and sunshine. However, storm Ali was still present, although in a much weaker version. We fought ourselves along the stunning coast southwards. Lonely beaches and rocks decorate the coastal landscape. Only slowly, we made progress and the strong headwind stole al our energy reserves. Many times, we saw large branches and a few garden fences bowed down to the storm. After the lunch break, the wind got weaker and cycling was much easier again. We spent our last night with Joel in a piece of woodlands, directly next to an abandoned house. 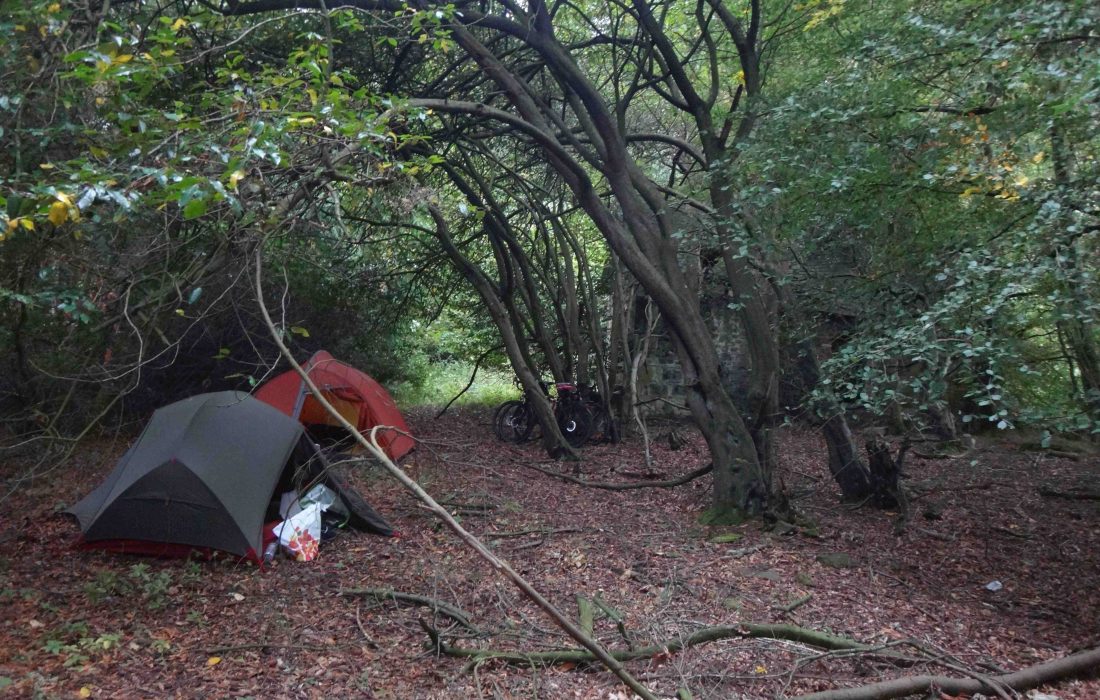 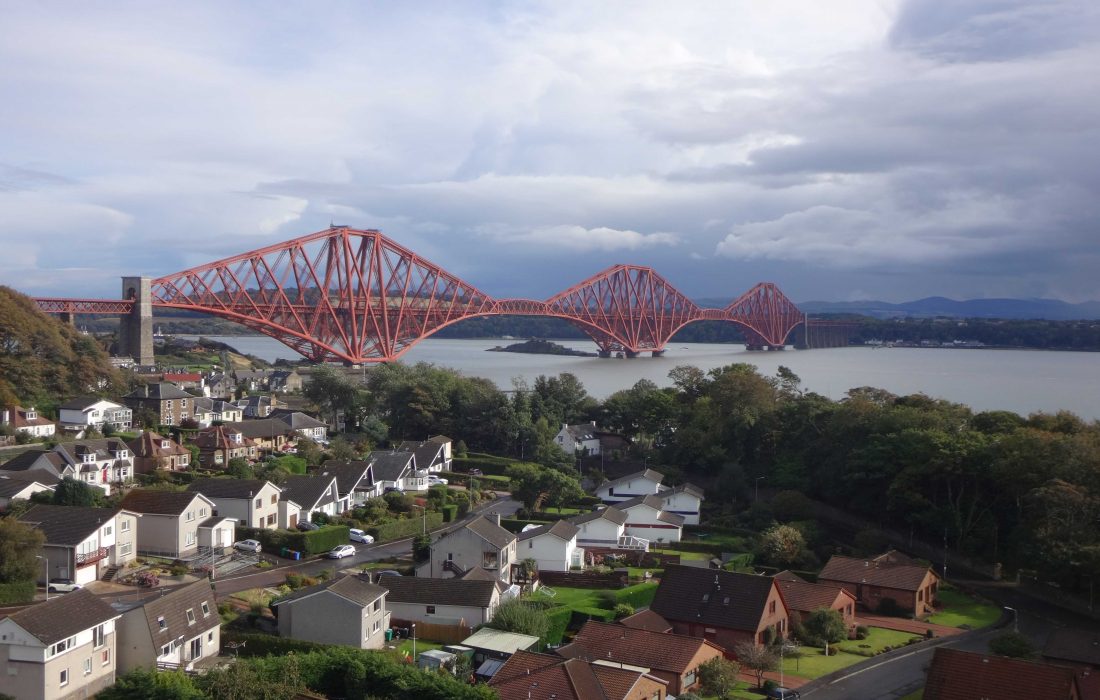 We started the day with an incredibly steep ascent and our bodies were faster on operating temperature as we wanted. Soon we reached Perth, the former capital of Scotland and crossed the river Tay. We passed through beautiful landscapes with countless hills and reached the Forth Bridge in the afternoon. The cantilever railway bridge, which was built in 1890 and at that time the bridge with largest range, is still number two worldwide. After checking in the Hostel, we met Joel’s father Armin, who is visiting us for the weekend in Edinburgh. Later, we enjoyed an “all-you-can-eat” dinner and overate ourselves excessively. Therefore, we could hardly walk back to the hostel

To get a better overview of the capital of Scotland, we hiked up to the Salisbury Crags, which separate the city from the local mountain, the Arthur’s Seat. From the hill, we admired the view of the sea estuary and the whole city. In the afternoon, we visited Edinburgh Castle, one of the Highlights of Scotland. The impressive castle is situated on top of the Castle Rock, which contains several historical and political backgrounds with many relics. The local mountain as well as the Castle Rock are of volcanic origin and shape the cityscape significantly.

After the free walking tour through the old town including many interesting stories, we strengthened ourselves in a recommended restaurant with local specialities. Some of us dared to try Haggis, a Scottish speciality, which consists of a sheep’s stomach filled with heart, liver, lung and other ingredients. 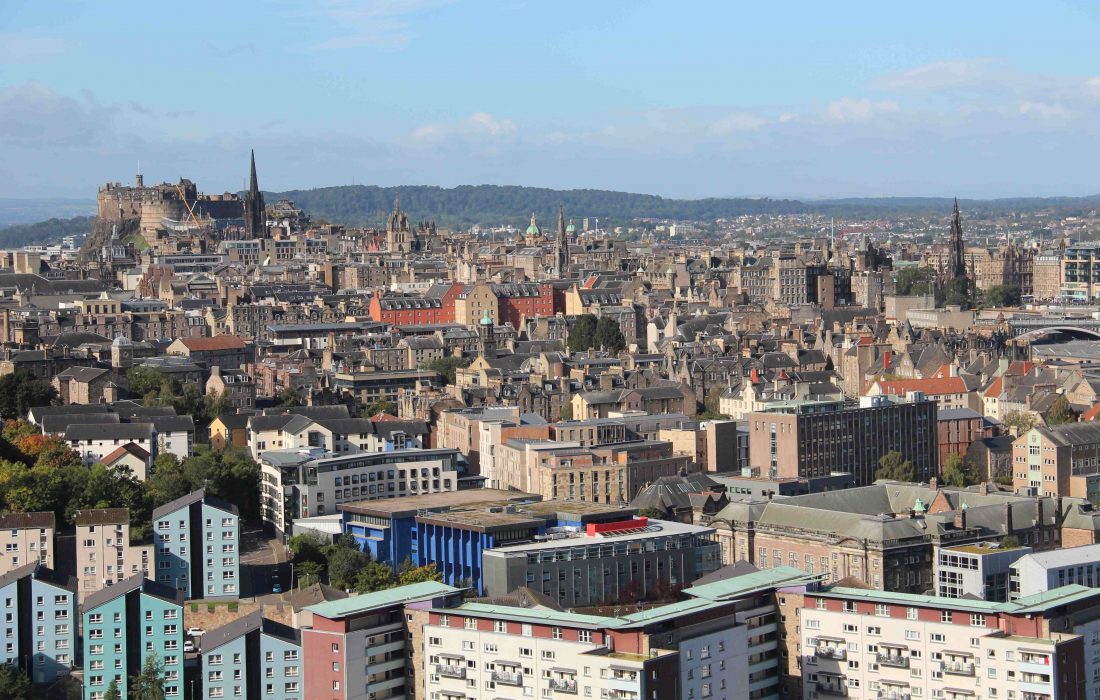 After 7352km and four months on the road, we said goodbye to Joel. We enjoyed starting the Cape2Cape adventure together. Accompanied by Armin he took the train back to Paris and will afterwards cycle back to Buchrain. Nicole, a friend from Germany, accompanied us since Edinburgh. 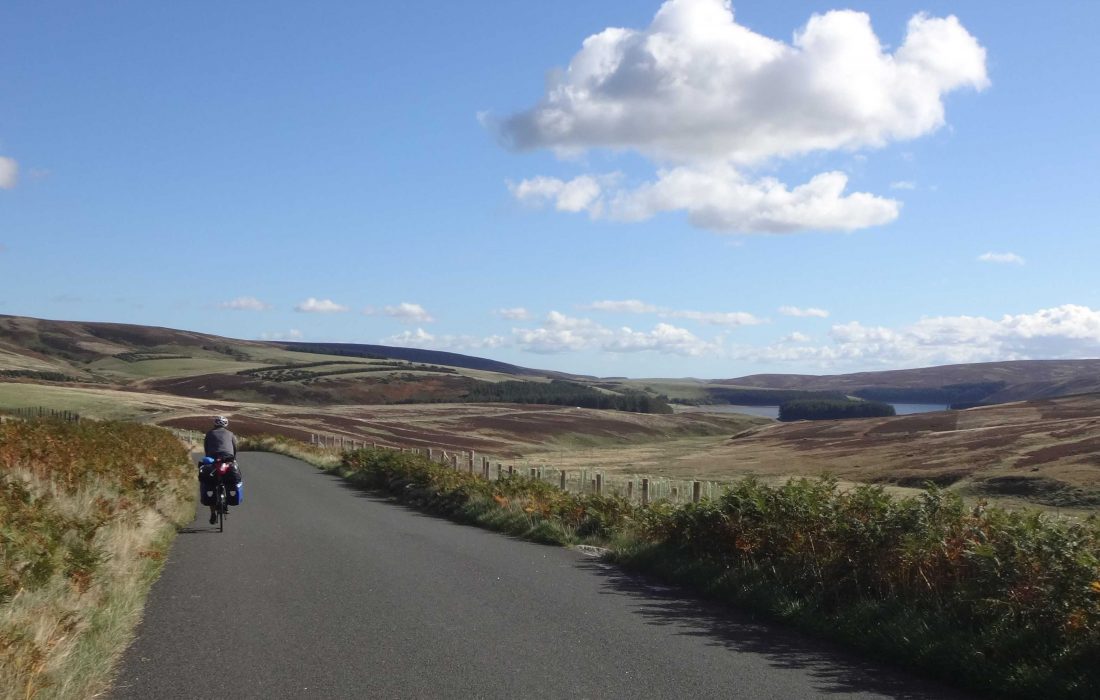 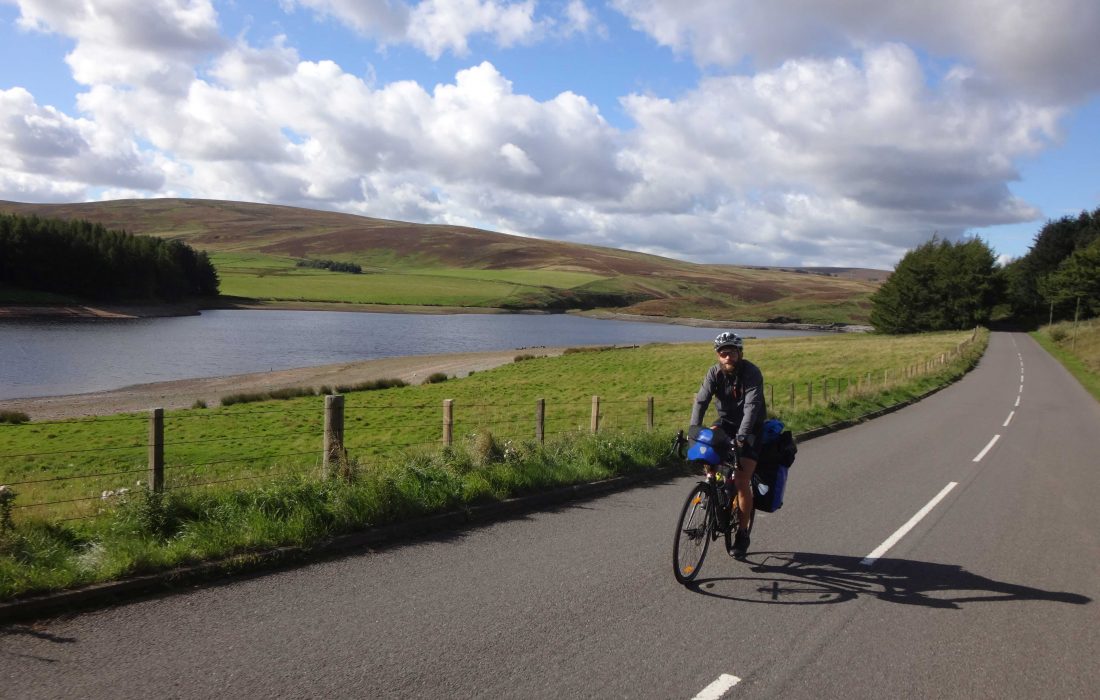 Just the two of us left the city, which served as a source of inspiration for J.K. Rowling when she wrote the Harry Potter books. Shortly after we left Edinburgh, we reached more and more rural regions and less frequented roads. The side road steadily ascended and after a few steep parts, we reached the highest point with sea view. The downhill led us through stunning hilly landscapes and we crossed many streams and accelerated up to 70km/h. After a large bridge crossing the border river, we left Scotland and entered England again.

<– Back to Northern Ireland