At the train station of Bad Neuschanz, we met Lilo and Peter so we could continue cycling all together. Our group crossed the beautiful water channels and the wide agricultural fields. On the bicycle, we visited the student city of Groningen and ate various Asian dishes in the city centre. A couple of times we waited at pull and turn bridges for the passing ships and could wave to the passengers. In Buitenpost, we said goodbye to Fabians parents and bought new supplies. After leaving the village, we asked a woman in front of her house, if we could build our tents somewhere in the neighbourhood, since it is generally forbidden to do wild camping. After a short conversation, we could put our tents on a meadow and were allowed to take a shower in the caravan, which was standing there. 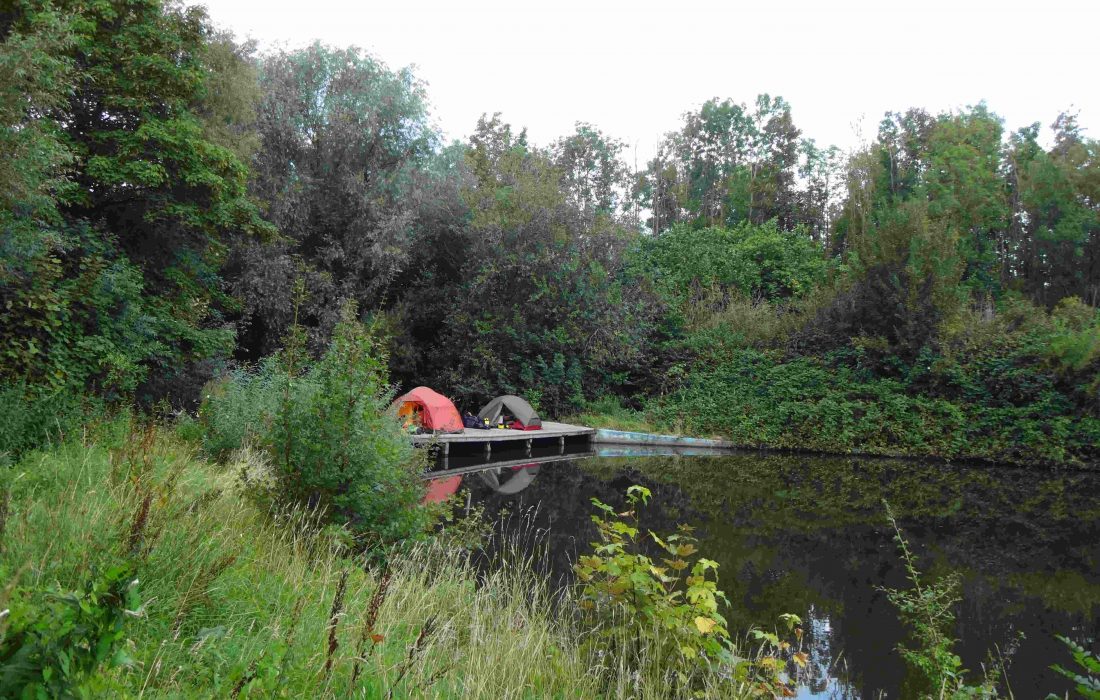 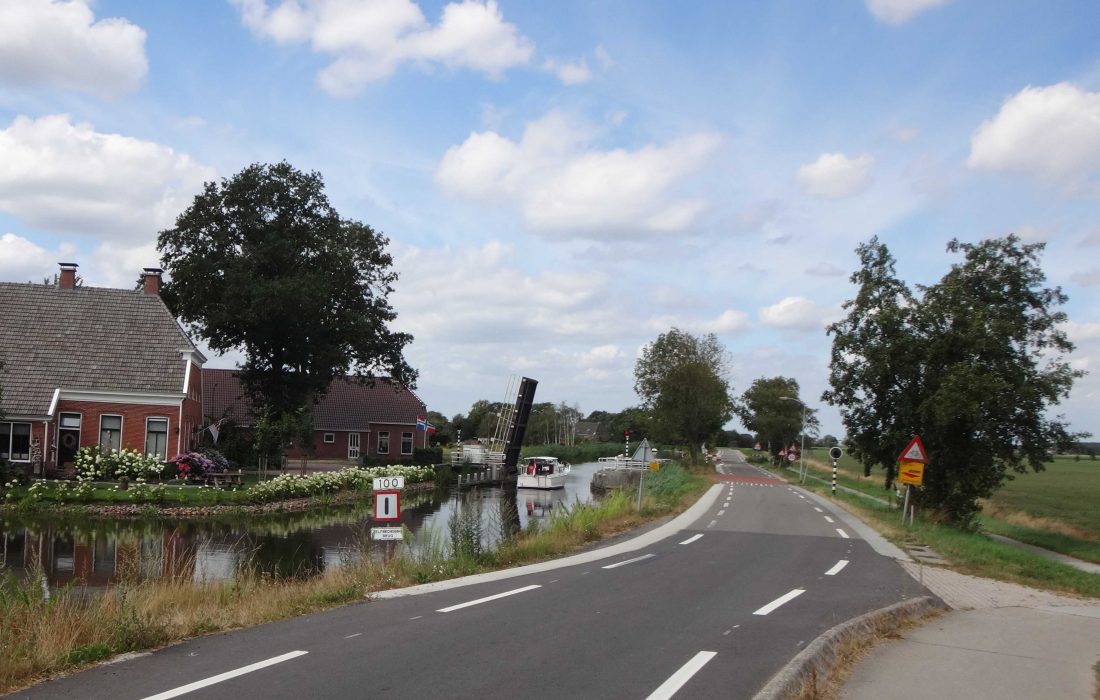 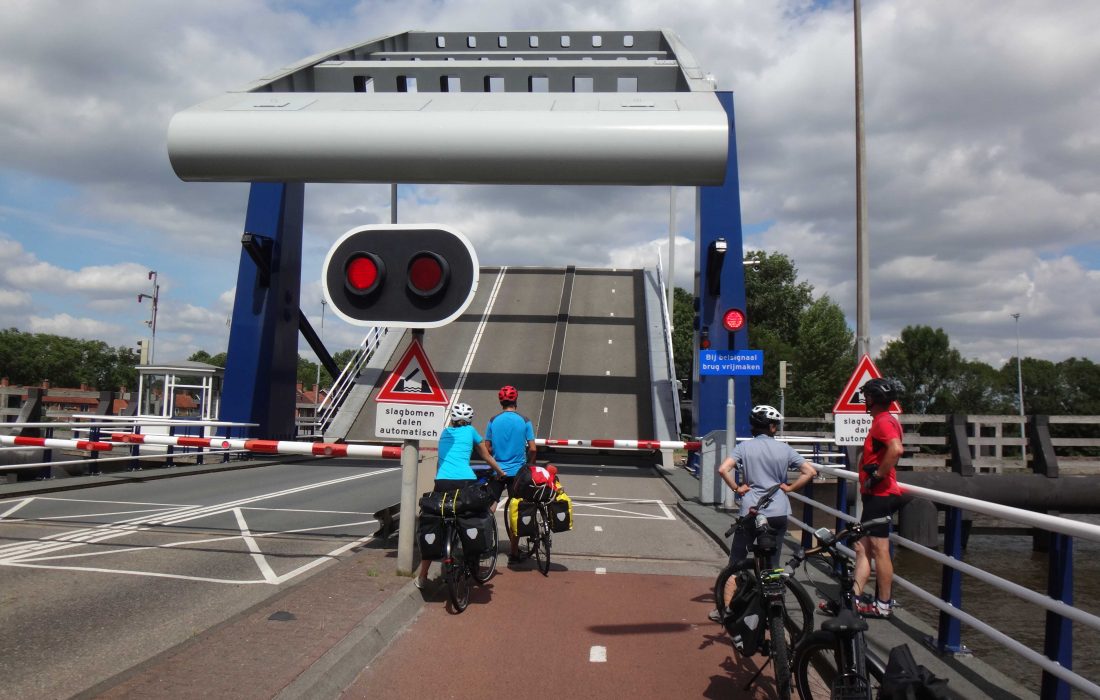 With new energy and a good mood, we cycled along the amazingly huge cycling path next to the main street. Soon, we realized that we had to dig for our rain gear in our bags for the first time in over a month. At the horizon, a wall of black clouds appeared and we cycled exactly towards it. A couple of minutes later, it started to rain and in the last moment, we could save ourselves under a roof of a house. 15 minutes later, the sun appeared again and we pedalled further through beautiful towns with many boats, which were floating in the canals. Before the Afsluitdijk-dam, a kiosk owner did not allow us to fill our water bottles and tested our temper. After the Afsluitdijk -dam, which was built for land reclamation and coastal protection, we found a cosy place to put our tents in one of the seldom forests in the Netherlands. 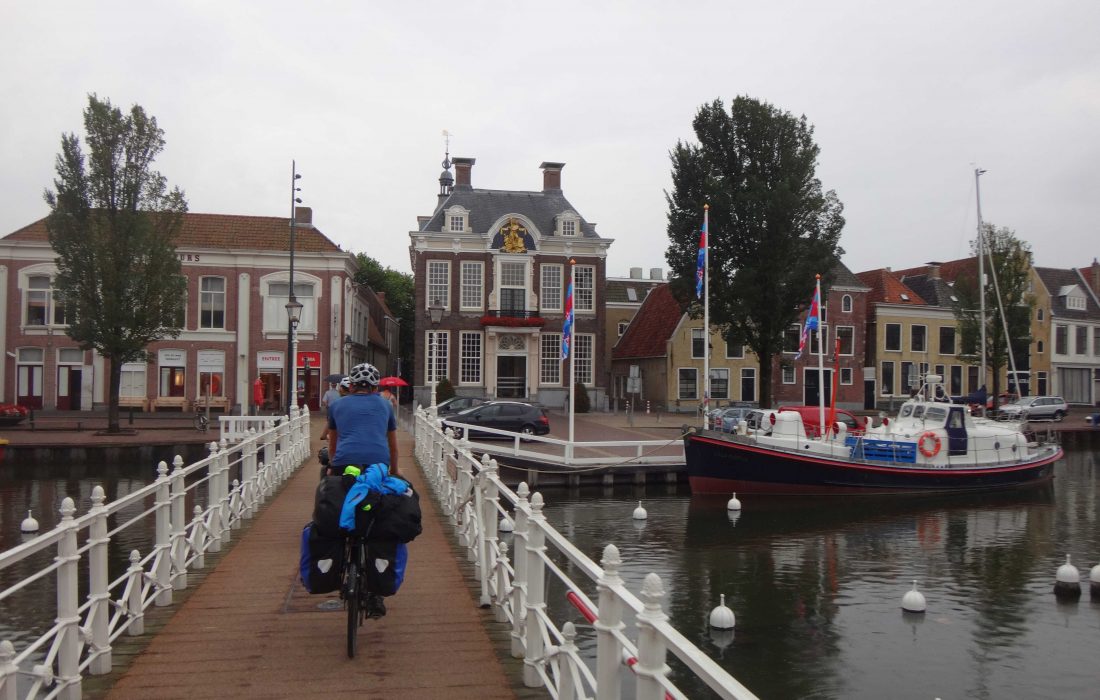 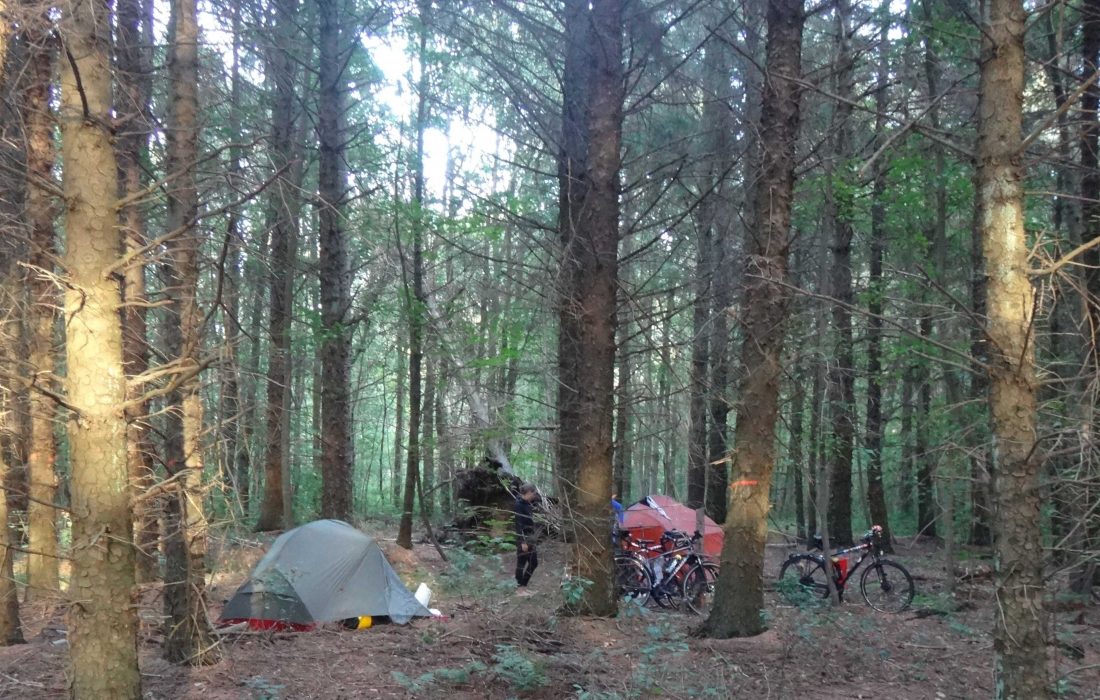 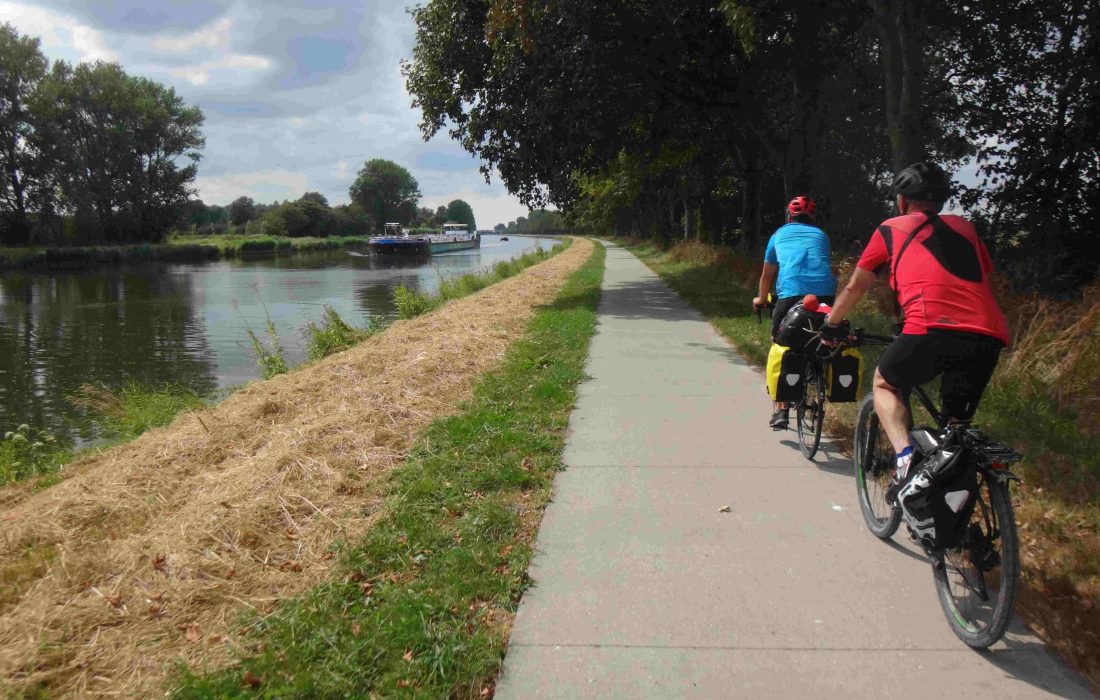 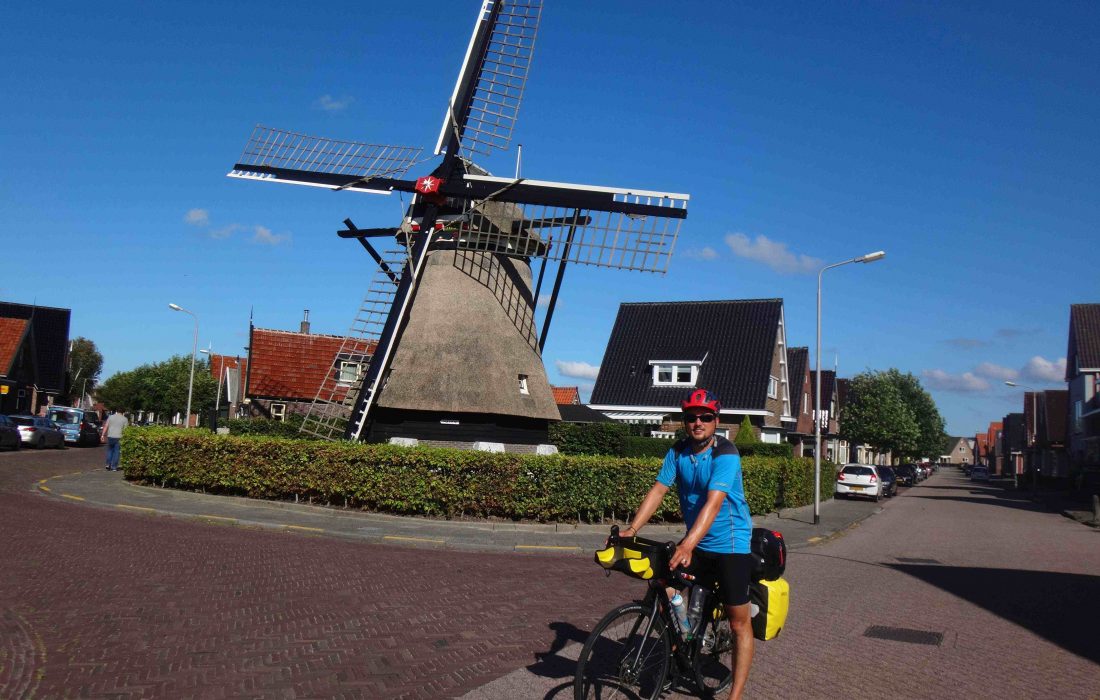 The day started with a seemingly infinite road along a dike and agriculturally used areas. In Pumerend, we made our lunch break and met Reinoud, a friend of Adrian, who was cycling from Amsterdam to meet us in the last city before the capital. In the outskirts of the city, we found a campground and stayed there for the night.

As already in Copenhagen and Hamburg, we joined a guided city tour. We learned that the city of Amsterdam was built on thousands of poles and those were rammed up to 18 meters deep in the silty ground. Afterwards, we strolled across the canals (Grachten) and satisfied our hunger in a restaurant in the district called Jordaan. During a canal tour, we enjoyed the evening ambiance and the sunset over Amsterdam from a different perspective. We especially liked the narrowest house of Amsterdam, which was only as wide as a door. In the early days, the house owners paid taxes according to the wideness of their houses, which is why they constructed them as narrow as possible. The buildings with the “moving hooks” and the houseboats fascinated us. The hooks are used to move furniture into the narrow apartments. In the red light district, called De Wallen, we enjoyed the rest of the evening and were surprised about the huge amount of tourists.

After a few errands, we moved our material to the flat of Reinoud, in which we were allowed to sleep until our onward journey. After we had dinner and some nice conversations, we prepared ourselves mentally for the upcoming Gay Pride of the next day. The second biggest public festival of the year attracts more than half a million people every year to Amsterdam. On the following day, we went to the city centre and enjoyed the open-minded and peaceful atmosphere, while the boats, filled with dancing people and roaring music, moved by us.

On the last day, we recovered from last night’s party and visited the Museumsplein, on which «I Amsterdam» is written in big letters and attracts many tourists. In the evening, we cooked “Zürigeschnetzlets” for our hosts and played a round of “Cards Against Humanity”. 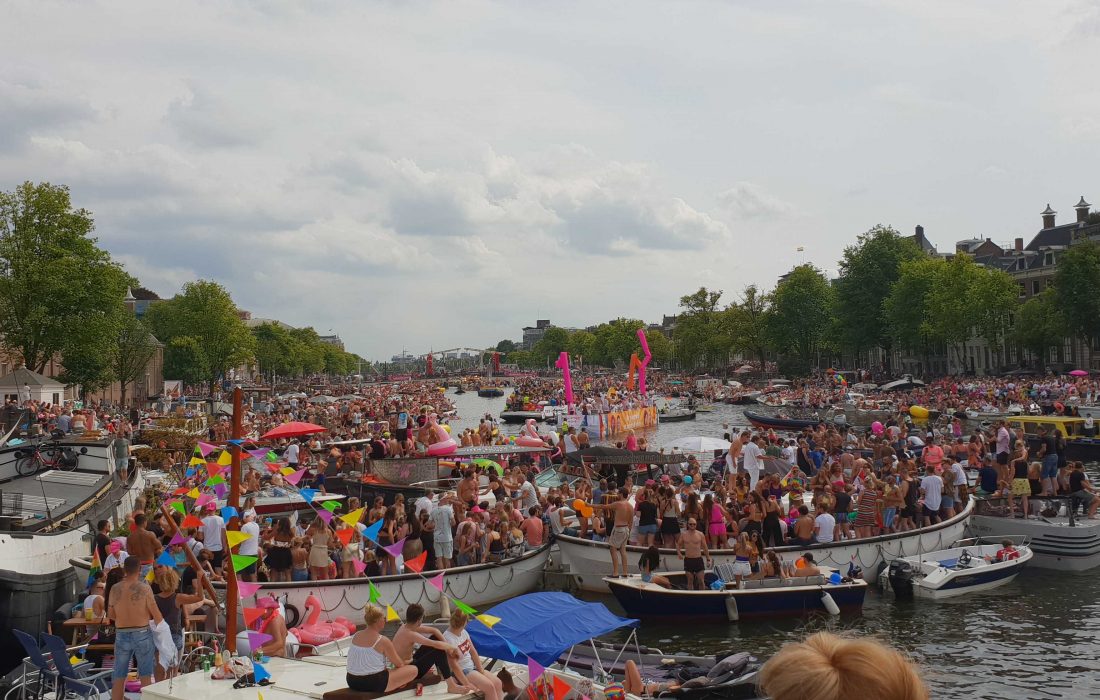 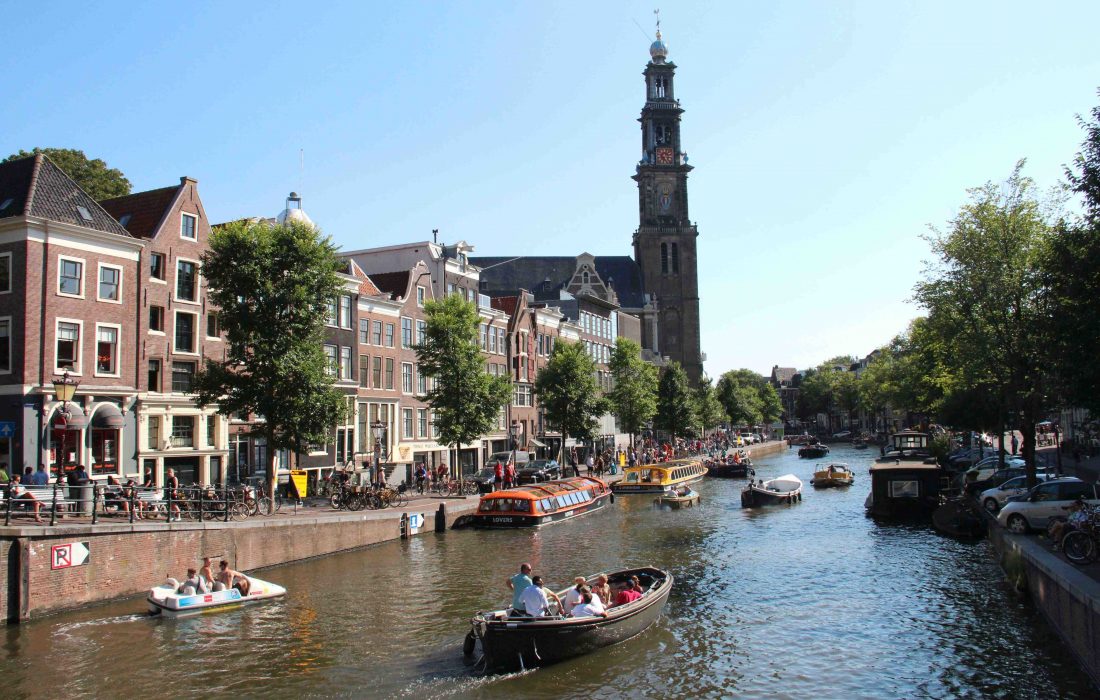 After saying goodbye to Reinoud and his roommates, we left Amsterdam in the direction of The Hague. On the way there, we crossed Leiden, the birthplace of the World famous artist Rembrandt. In The Hague, where the residence of the parliament and the government of the Netherlands and the kingdom of the Netherlands is located, we visited a few sights by bicycle. The domicile of the parliament, the International Court of Justice and the Haagse market. This motley market is the biggest permanent weekly market in the Netherlands, if not whole Europe. On the last 20km to the targeted campground in Rotterdam, we cycled through Delft, one of the oldest Dutch cities.

At noon, we met Fabians parents to do a harbour excursion. The boat led us through the largest European port and gave us an impression of the immense size of the loading and unloading zone. The second biggest city of the Netherlands was almost fully destroyed in the Second World War Because of that, many high; recently constructed buildings characterize the cityscape. In the afternoon, we visited the quarter, which was not destroyed through the hail of bombs of the allies and therefore still represents the old architecture of Rotterdam. 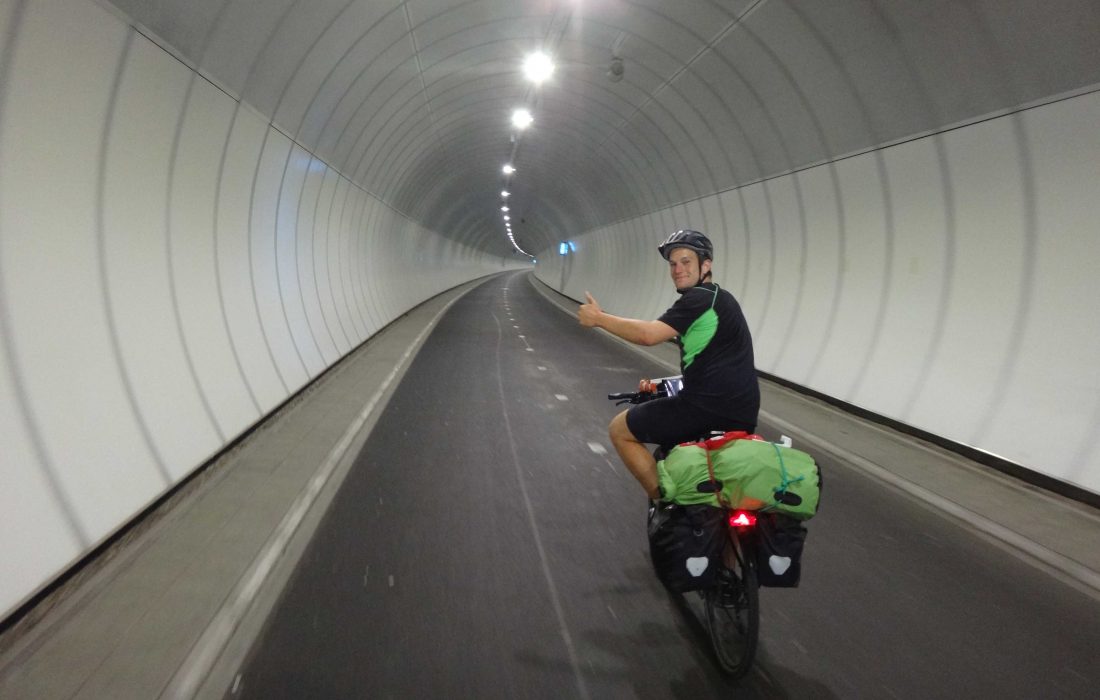 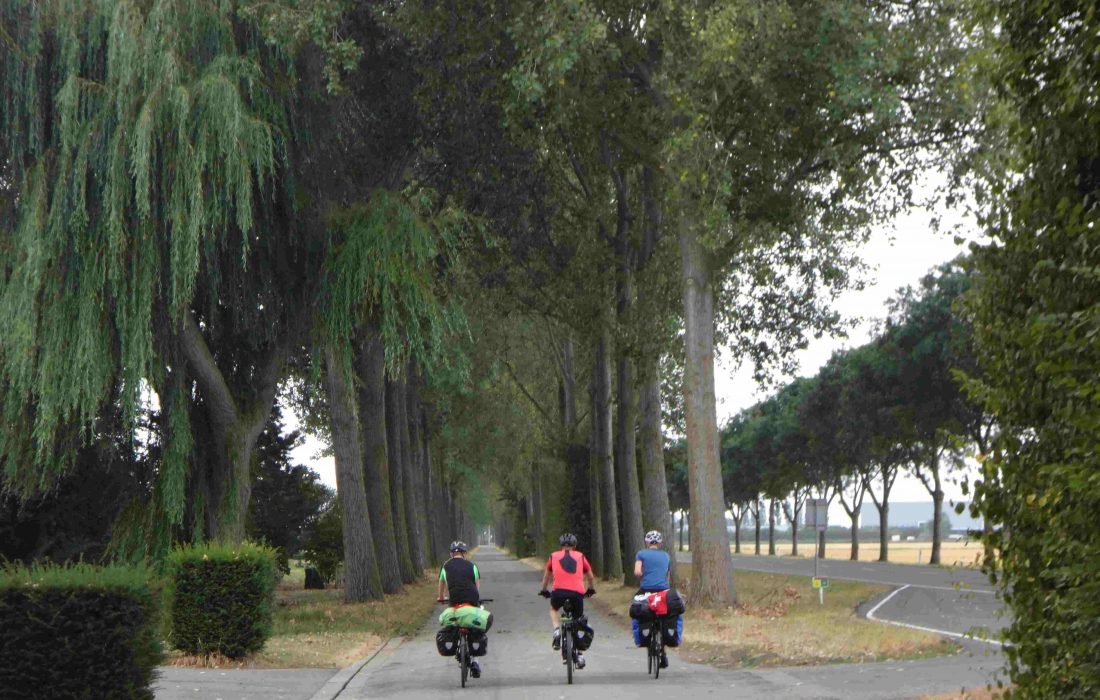 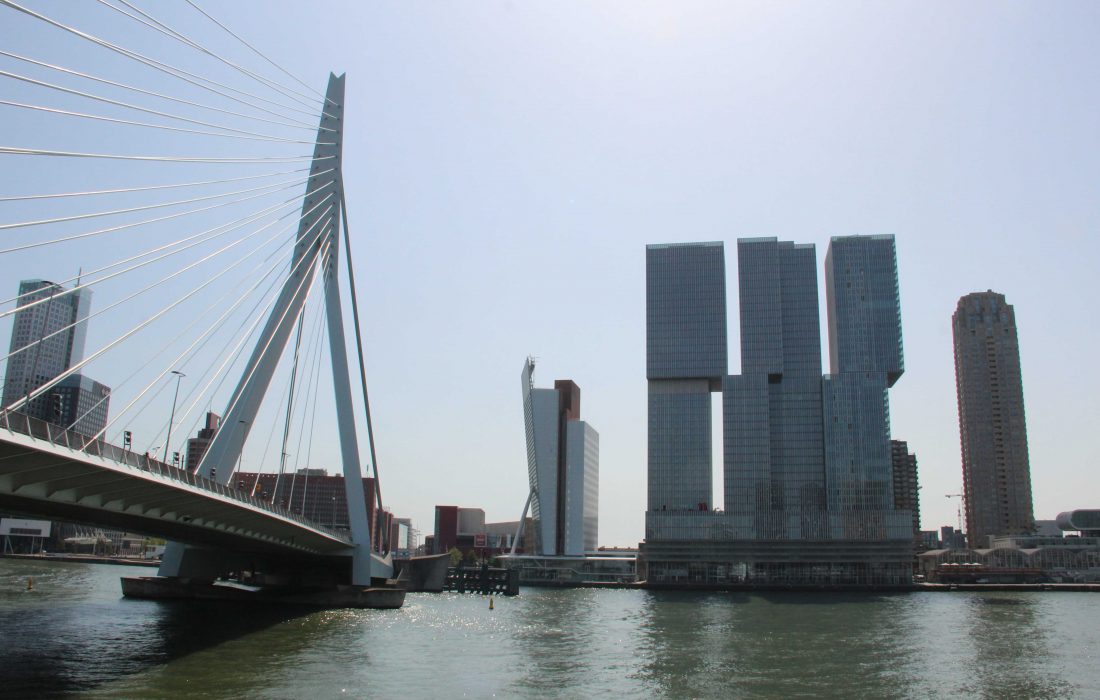 Together with Fabians parents, we cycled through the Maastunnel, which transits under the last part of the Rhine-Meuse-Scheldt delta. The cycling paths in the Netherlands are extremely well developed, which is impressive. The underpasses for cyclists under trains stations and rivers fascinated us the most.

On our further route, we passed another tunnel and we cycled on a dam, from which we observed several floodgates. In Roosendaal, we were able to profit from the generosity of Fabians parents and ate a delicious meal in the centre. Thanks a lot for the sponsoring, which was rich in calories!

A few meters before the Belgium boarder we asked a farmer, if we could camp on one of his fields. The farmer showed us immediately where we could put our tents.