Before the departure, the farmer showed us his automatic milking machine and the newly born calf. After less than one kilometre, we crossed the border to Belgium. In Antwerpen, the most important centre of processing and trading diamonds, we ate our lunch. In addition, Antwerpen has the second largest seaport in Europe. With temporarily strong rainfall, we cycled to Brussels, checked-in to our hostel rooms and were looking forward to a real bed. 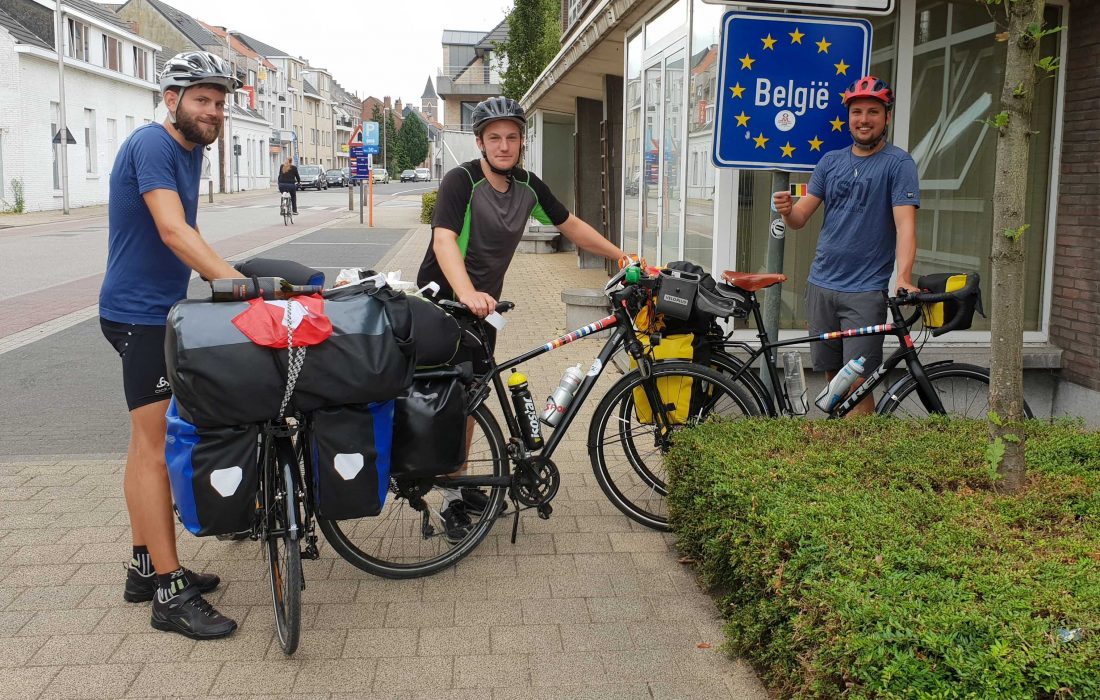 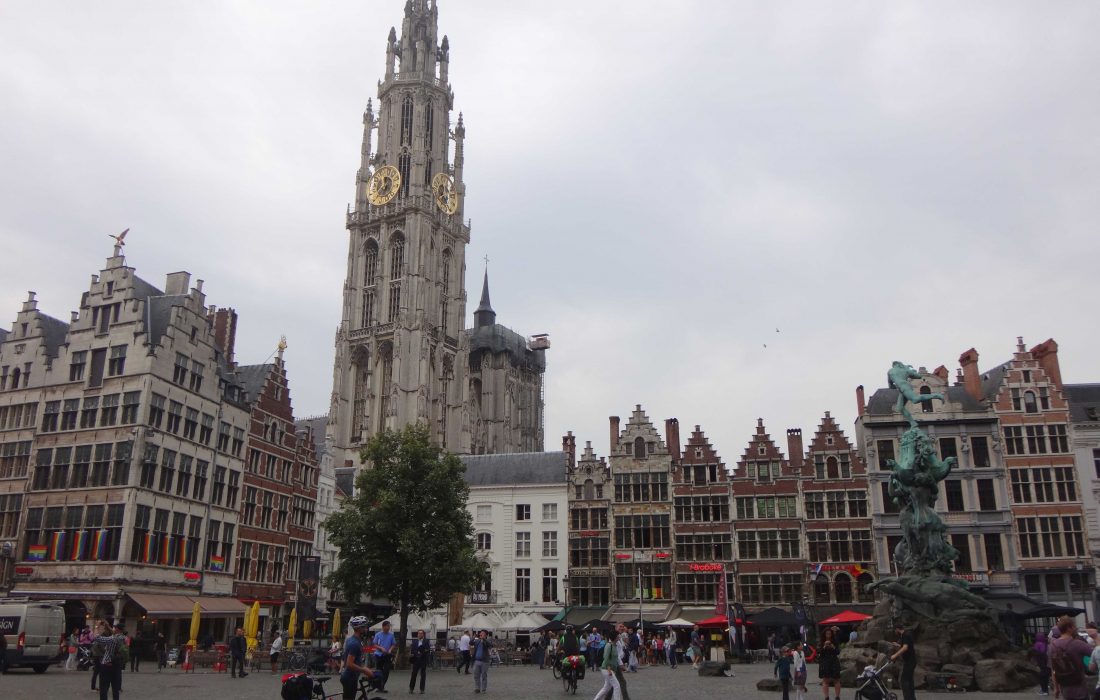 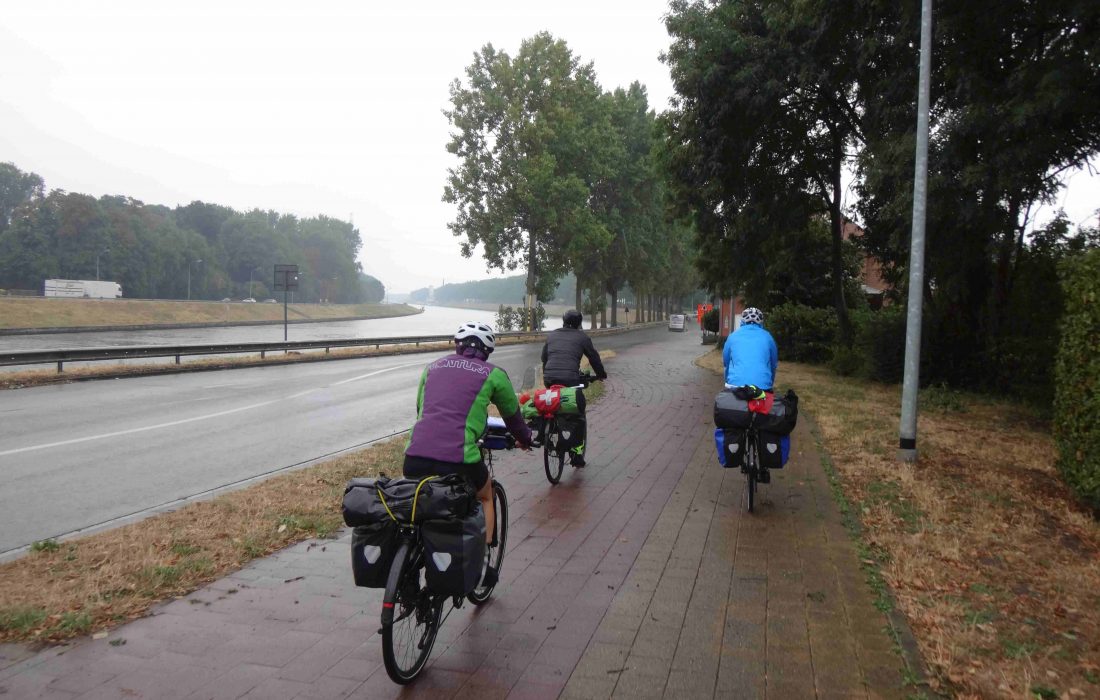 To learn about the capital of Belgium, we joined a free walking tour. The Grand Place, in the old town, impressed us the most and counts to the most beautiful squares in Europe. The particular Belgium humour is apparent when looking at the urinating boy as a fountain figure (called Manneken Pis), which is a landmark of the city.

In the evening, we celebrated Fabians 30th birthday with his parents in a typical Belgian restaurant and enjoyed the various culinary dishes. The highlight of the day was the surprise visit of Daniel, Florian, Raphael, Roger and Roland (good friends from Switzerland). The birthday celebration kept going until dawn and we enjoyed the delicious Belgium beer in its diversity.

On the next day, we took the metro to the administration buildings of the European Union, which has its headquarters in Brussels. In the evening Adrians parents visited us, which are on their way to the UK. Together we ate in the city centre and lingered in the lively centre until midnight.

During the last day in Brussels, we entered a tourist bus, which led us through the city and presented us further sights. At the Atomium, a remnant of the Expo of 1958 and meanwhile more than a landmark of Brussels, we ate a huge sausage. The 102 m high, impressive construction represents a crystal model of the chemical element iron more than a billion times magnified. The weekend in Brussels passed in a twinkling of an eye. We enjoyed the visits from Switzerland a lot! 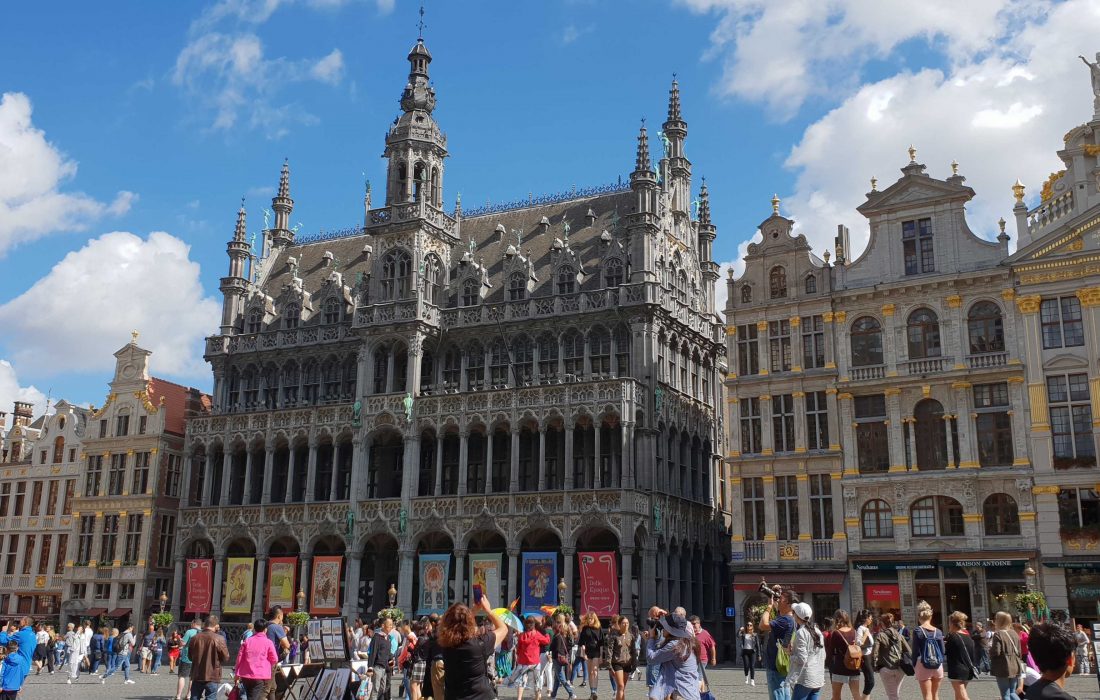 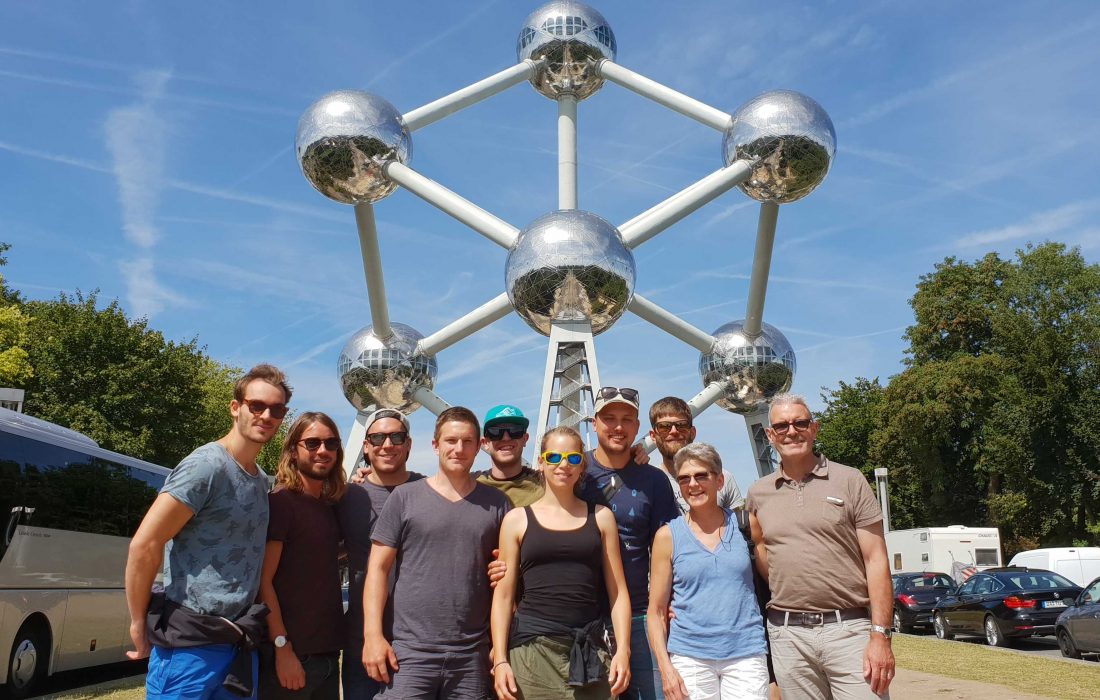 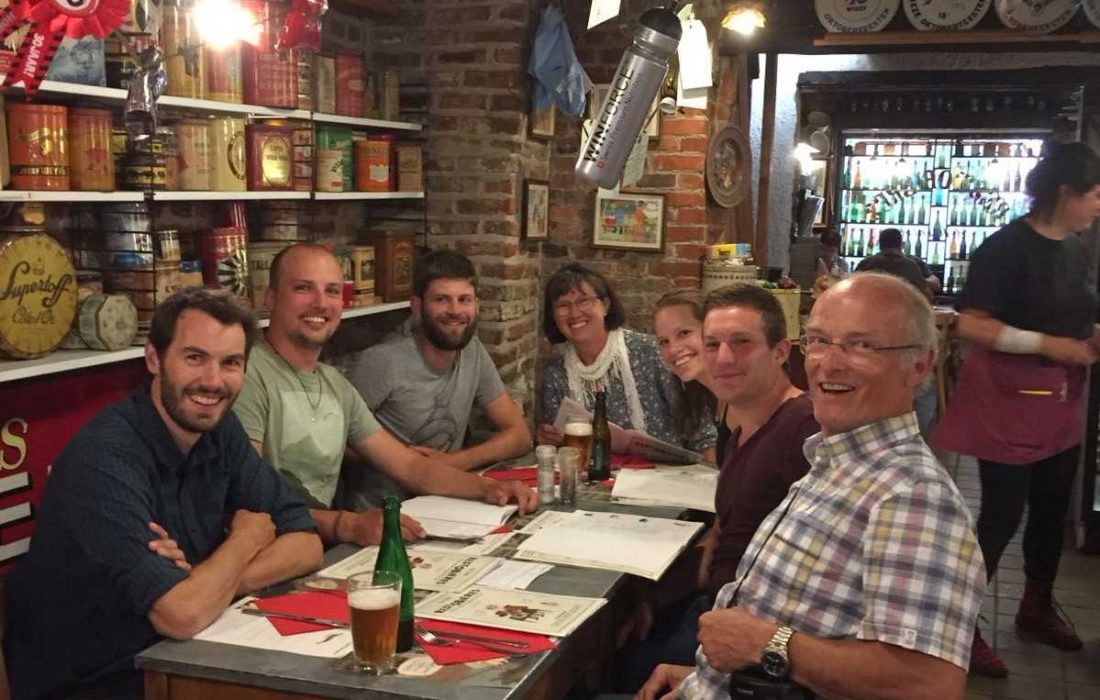 Shortly after Brussels we met Mr Eddy (a friend of Joel), who cycled himself in more than a dozen countries. He welcomed us sincerely and cycled with us to Gent, where he invited us for a pizza and a drink. After the generous sponsoring, the Belgian showed us the city and accompanied us for some more kilometres. Beyond Gent, a storm broke out and we paused below a highway bridge to wait until the rain stopped. After more than 100km, we reached the campground directly before Bruges.

We walked from the campground to the old town. We knew the city from the movie “In Bruges” and wanted to check if Bruges was really worth seeing. Many tourists had the same idea and strolled through the beautiful old town with its towers and churches between the channels. Since Bruges was never destroyed by any extensive fires or wars, the historical buildings and the medieval cityscape was surprisingly well preserved. Furthermore, the medieval city centre was accepted as an UNESCO World Heritage in the year of 2000.

Back on the bike, we crossed Bruges. Thereby, we witnessed a parade with various groups, which were dressed up due to the public holiday Immaculate Conception as knights and other medieval characters. All shops in Belgium and later France were closed because of the public holiday and made our hunt for food more difficult.

After crossing the border, we reached Dunkirk and made our lunch break. In the city centre there was a flea market full with locals, like in some villages we crossed before. Prior to leaving the city, we visited the monument, which symbolized the rescue of thousands of soldiers during the Second World War from the nearby beach. In the operation Dynamo, the Royal Navy rescued most of the British and French troops, which flew to Dunkirk.

fFollowing the repair of a broken spoke, we tiredly reached the ferry port of Calais and bought our tickets. The ferry to Dover cost 35 Euros us per person and bicycle and exceeded our daily budget by far. During the 1.5 hours on the ferry, we ate dinner and enjoyed the pretty sunset. In the darkness, we climbed the cliffs of Dover and found a place to sleep in a forest next to the highway. 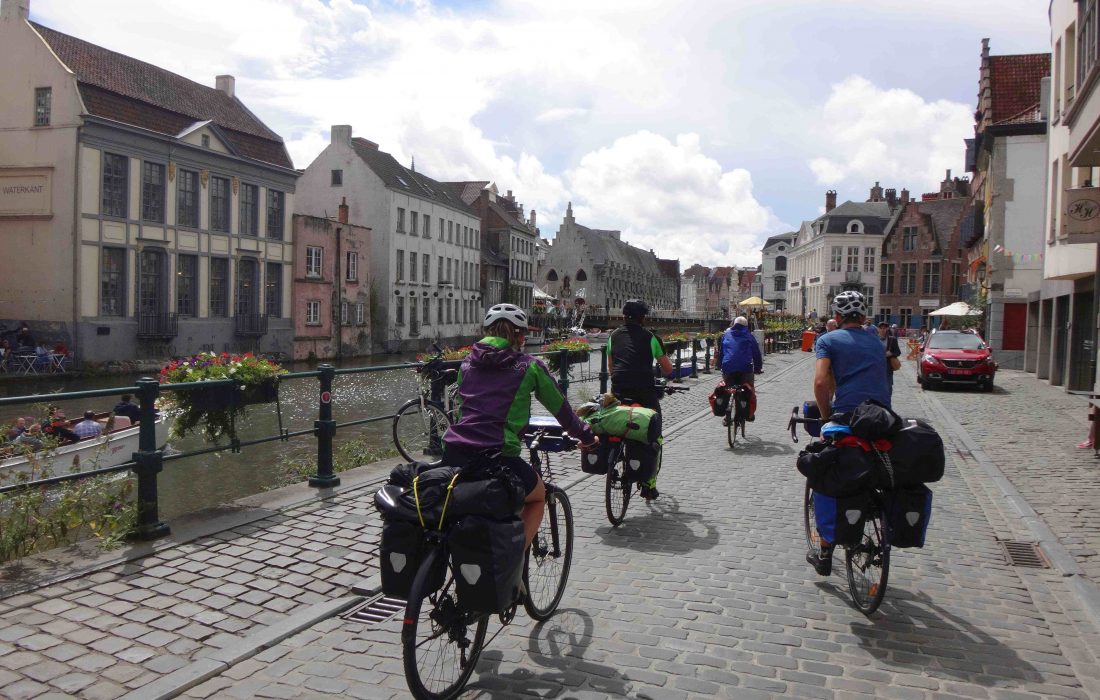 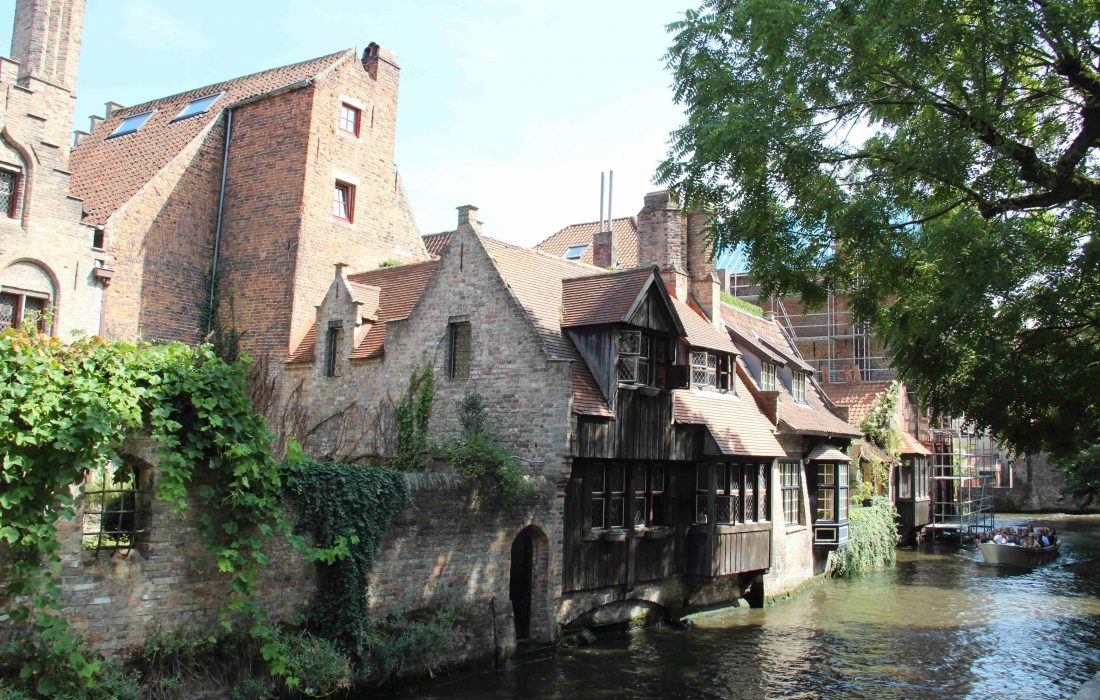 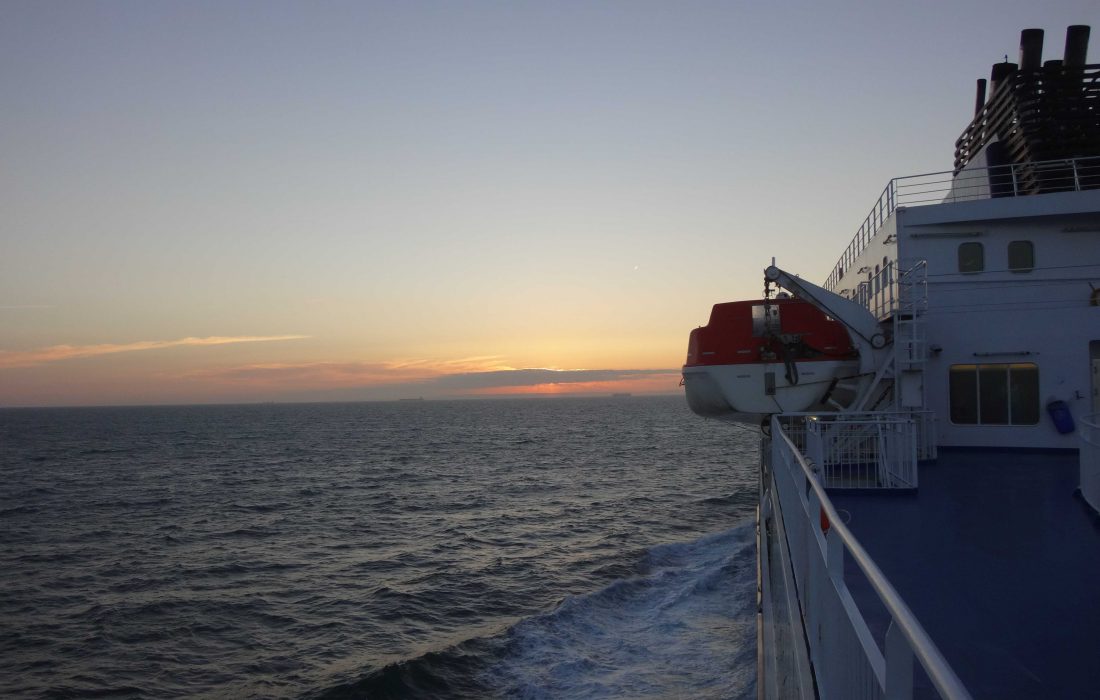 <– Back to the Netherlands