Today, we cycled to the closest beach to enjoy the sun. In the refreshing sea, we cooled down in between. While Joel picked up his girlfriend Angi at the airport, Adrian and Fabian picked up their things and cycled into town. In the evening Fabians girlfriend, Bettina joined the group.

For the rest days in Copenhagen, the girlfriends of Fabian and Joel visited from Switzerland. To get a first impression of the city, we joined the “Free Walking Tour”. A local tour guide gave us the most important information about some interesting buildings and squares. We walked through the city with a huge group and learned a lot about the history of Denmark and the development of the city of Copenhagen.

The Danish people are the third happiest people in the World, after Norway and Finland. The reason for that could be the extremely modern oriented welfare system and that health care is paid by the high taxes and therefore free of charge for everyone. In addition, there is no student fees and students even get scholarships, which do not have to be paid back to the state.

In the afternoon, we witnessed the defeat of the Swiss football team against Sweden and distracted us in Christiania with a cold beer. The Freetown Christiania exists since 1971 and is an alternative residential area in the city district of Christianshavn. The citizens of the former military area see themselves independent from the state authorities. The consumption of so-called “soft drugs” is tolerated by the government and is therefore a magnet for tourists.

The «little mermaid» is the most famous symbol of the city. However, it was chosen as the second most disappointing tourist attraction in the World.

We visited the castle and the city park, which was located very close to the castle. 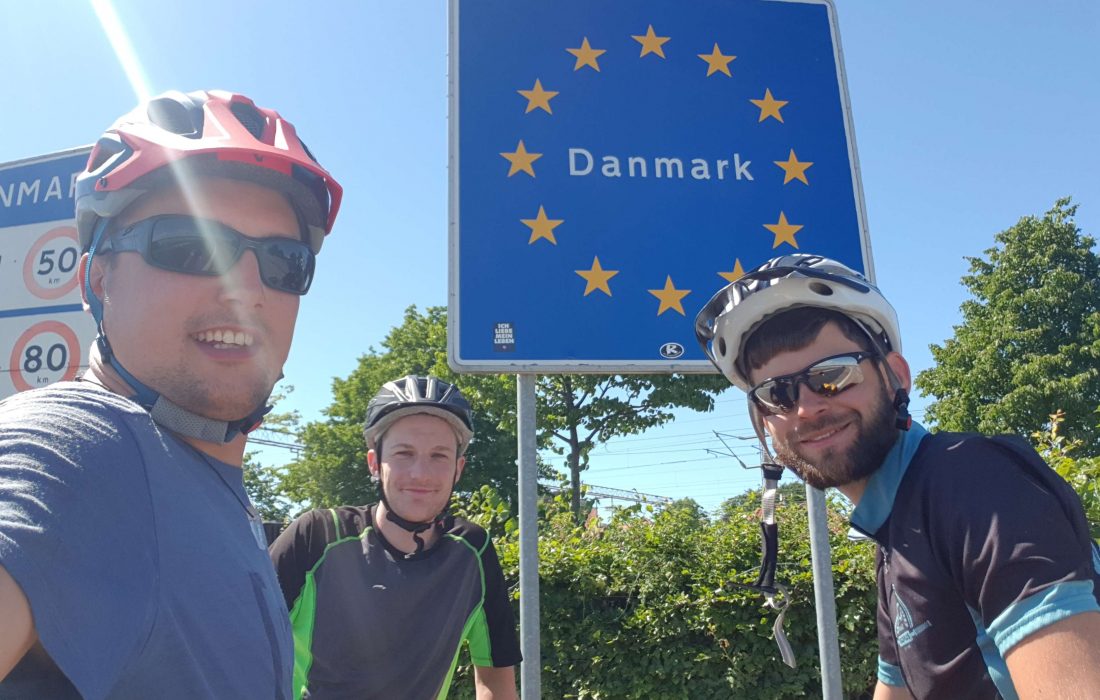 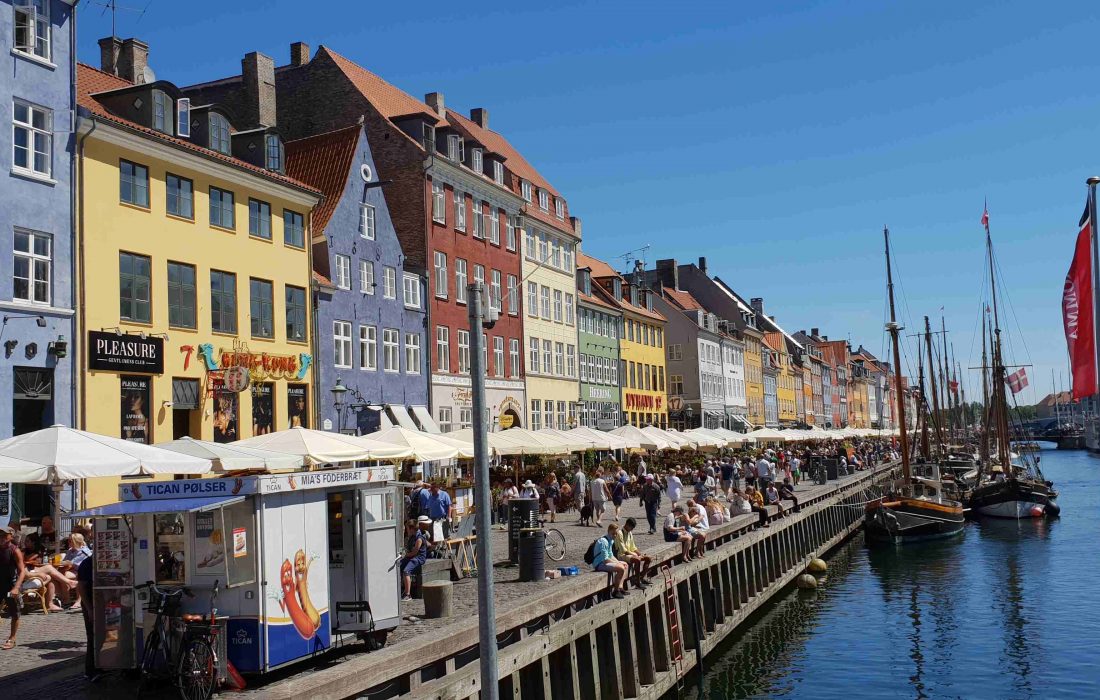 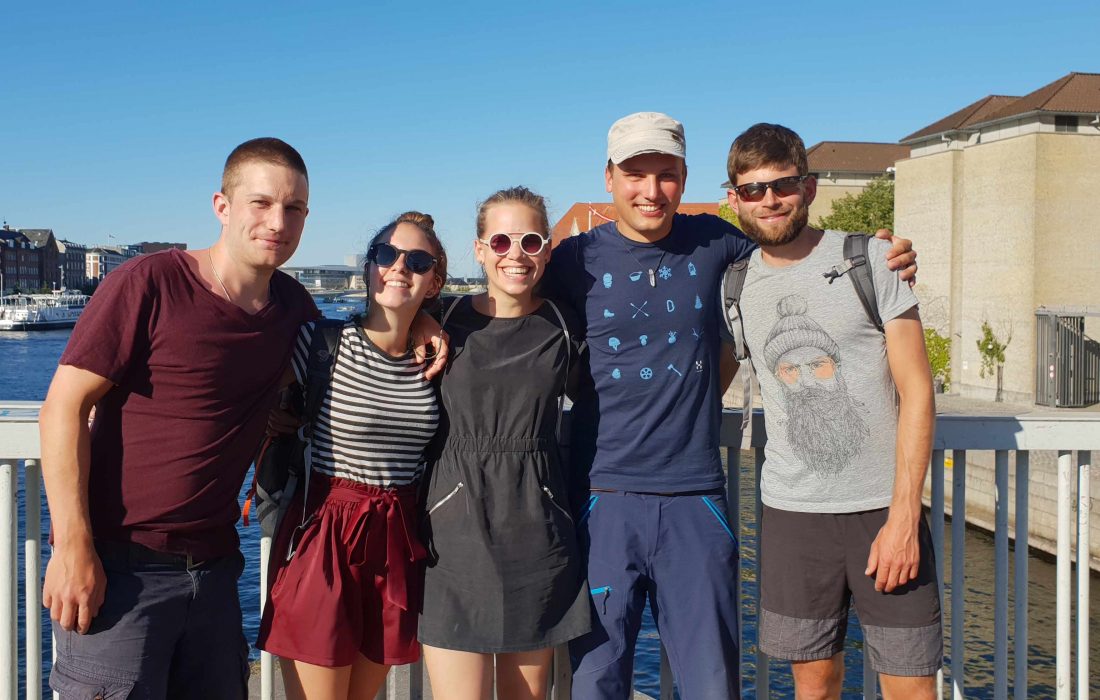 With a heavy heart, we left Copenhagen in the early afternoon and started cycling again towards South West. Following one week of blue sky, there were clouds for once today. After approximately 30km, agricultural fields and forests greeted us again on the roadside, after a long time of suburbs and busy roads. In the evening, we found a shelter in a forest in the middle of a village with tables and benches.

The sun welcomed us again and after the lunch break, the wind picked up and whipped in our faces. We cycled along beautiful cornfields, crossed several long bridges and cycled passed magnificent traditional Danish houses. After we took the quite expensive ferry to Spodsbjerg (15 USD per person with bicycle), we camped on the nearby beach. 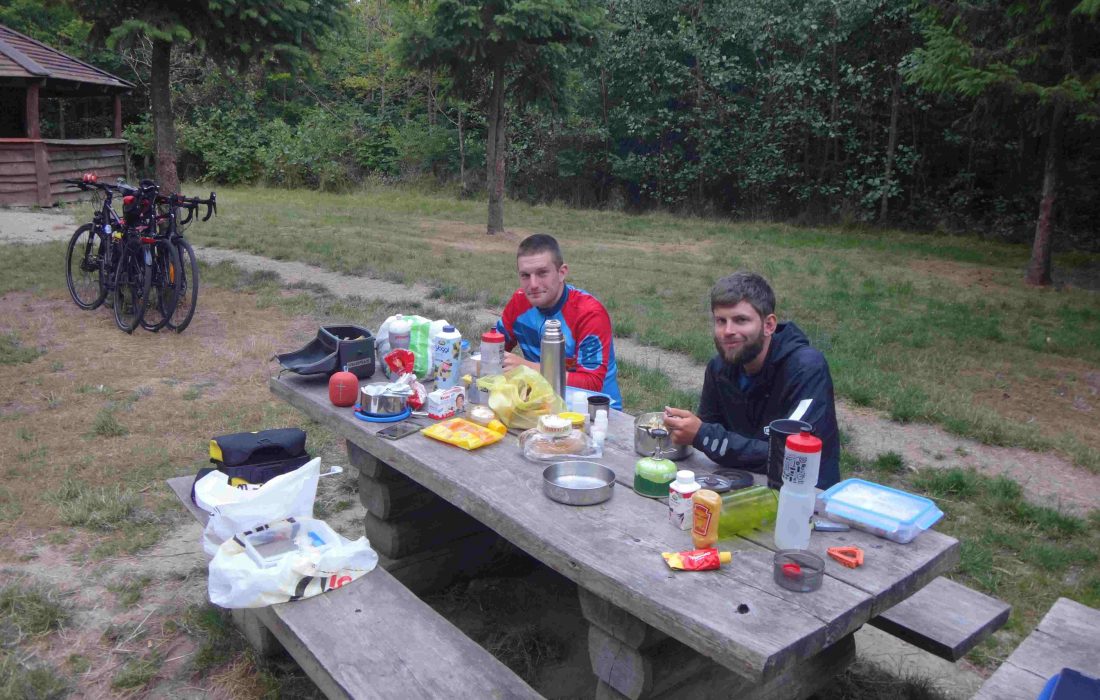 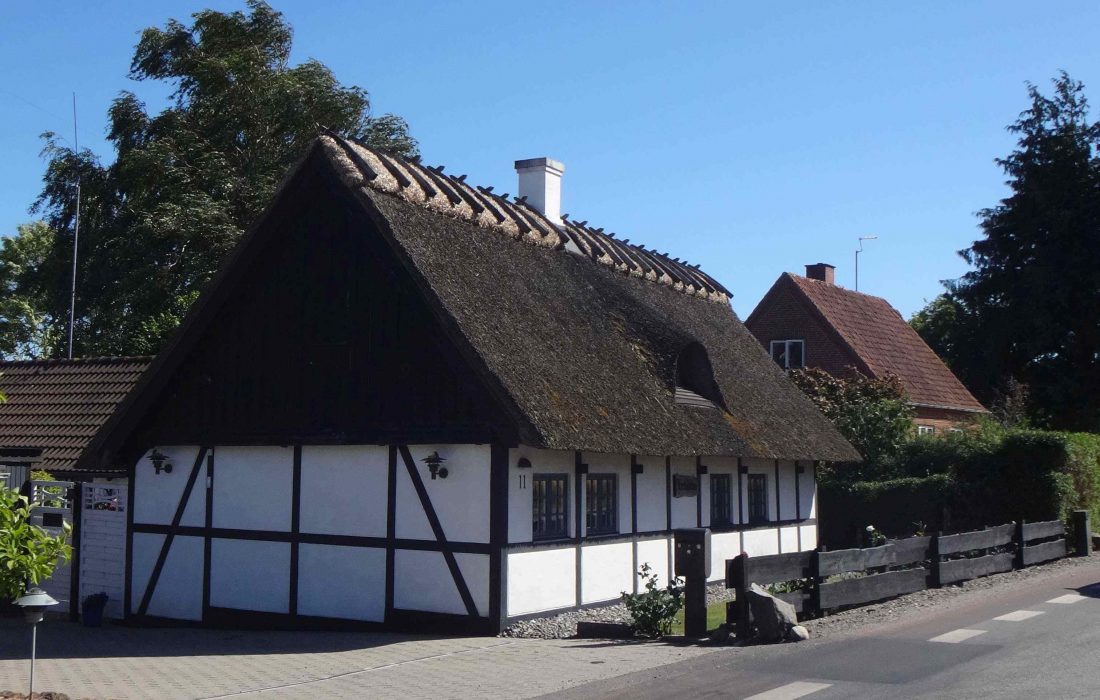 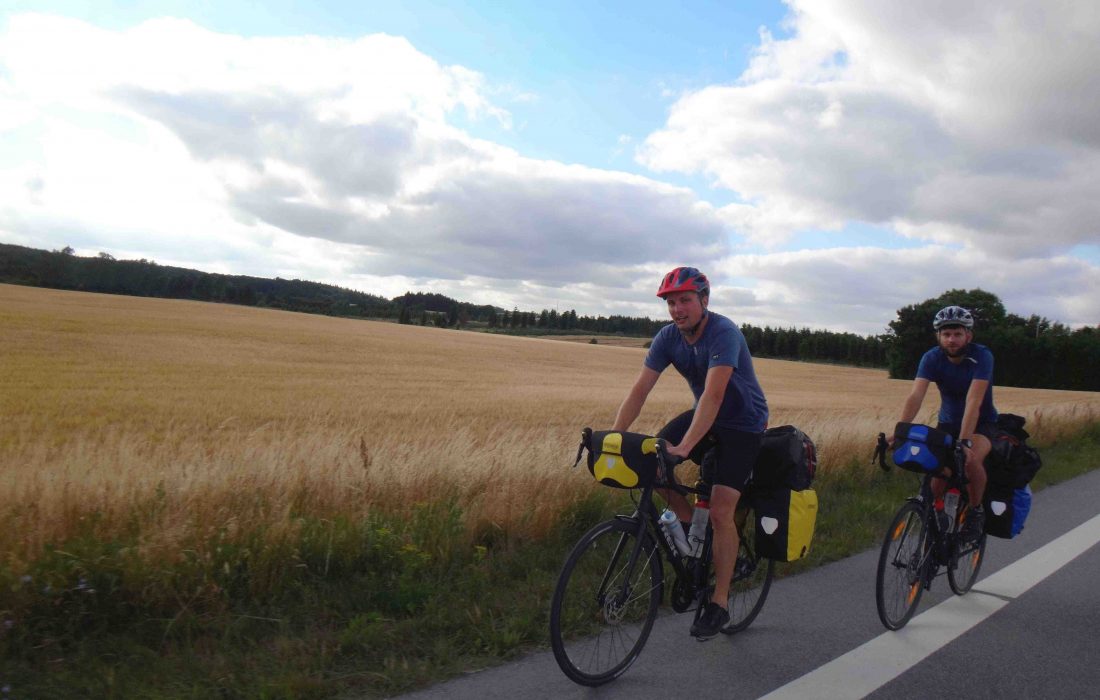 We started our day with strong headwind and wanted to reach Odense before the lunch break. The third largest city in Denmark had a few old churches and some beautiful city parks to offer. After a relaxing lunch break, we cycled another 30km and found a camping spot directly in front of a small lake. Directly before the aspired goal, a spoke on Fabians rear wheel broke and we had to fix later on.

The route today led us through small villages, uncountable cornfields and potato fields in the afternoon. Half of the area of Denmark is used agriculturally, even though the soil is low in nutrients. This is compensated through intensive fertilization.

The only form of water which descended from the sky in the last few days, originated from the huge irrigation systems, which defy the extremely dry summer.

In Kolding, on the shore of a nice city lake, directly next to the castle “Koldinghus” from the 13th century, we enjoyed our lunch break. In the evening, we ate a family pizza with a diameter of 60cm in Ribe, the oldest city of Denmark. The city had the most important Danish port on the North Sea in the past. Besides the beautiful old town, the “Dom to Ribe” impresses with its size and amenities as well. 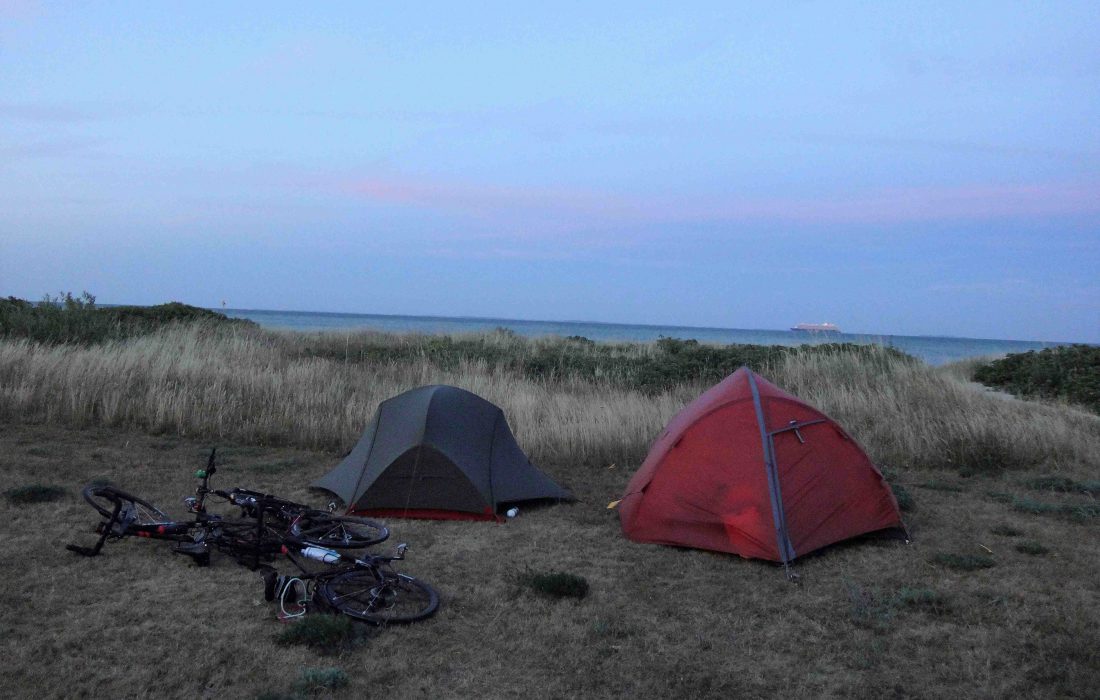 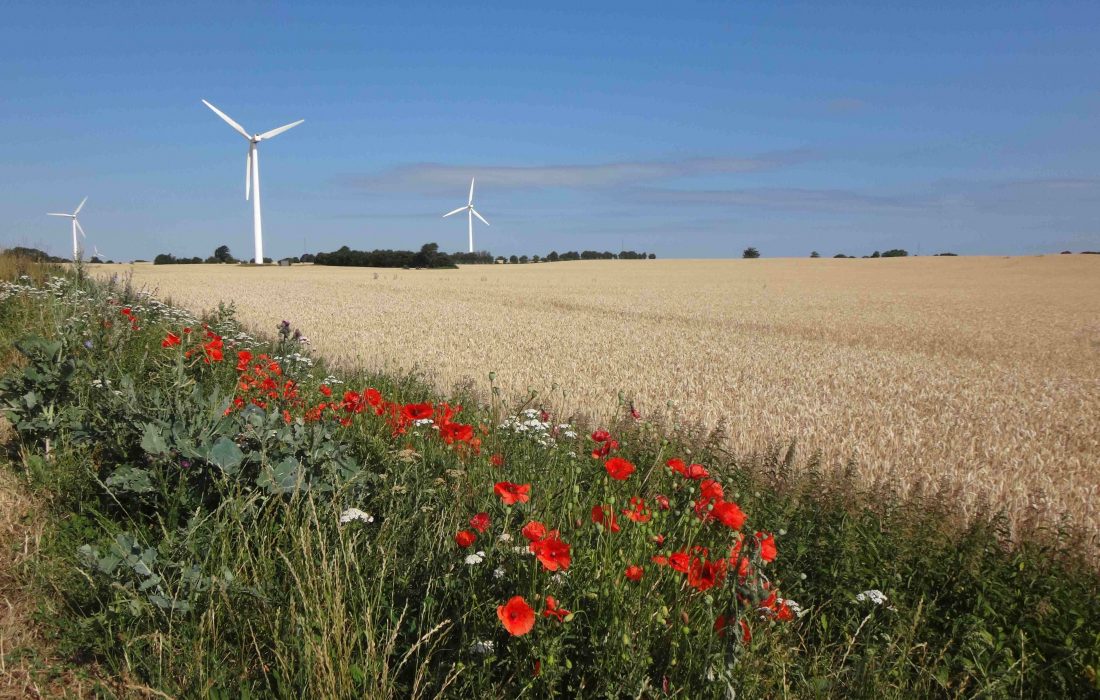 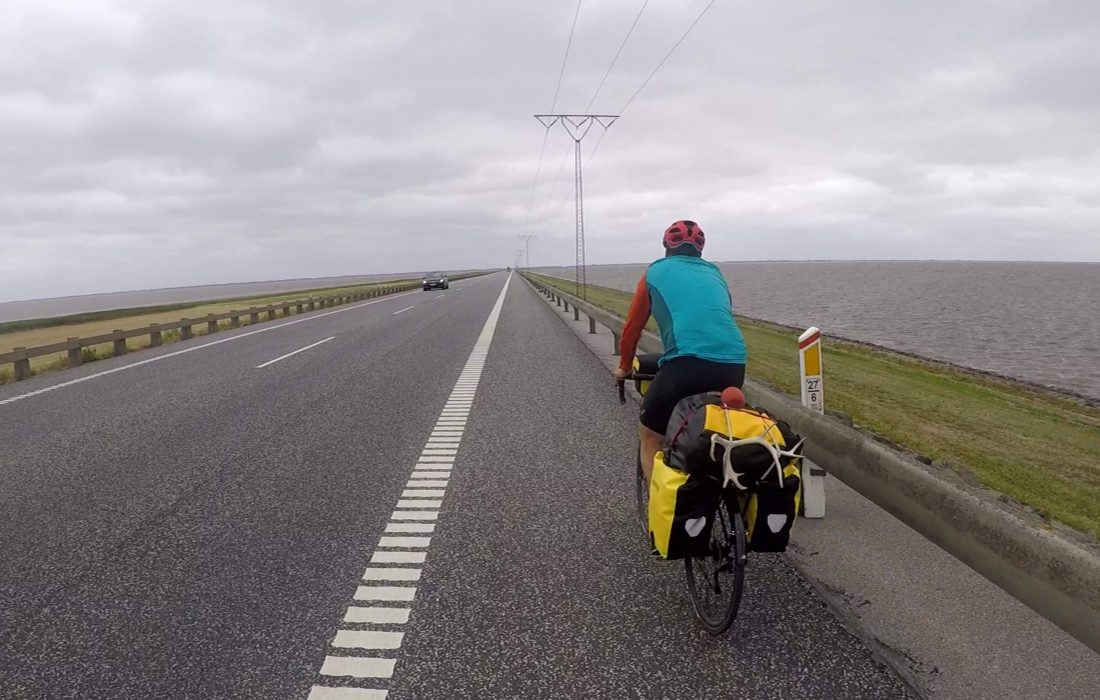 In the tourist information of the mudflat island Rømø, we asked overnight possibilities and how to travel further from here. The national park mudflats is one of totally five national parks in Denmark. The island Rømø and therefore the Danish mudflats were accepted as an UNESCO world heritage side in 2014, besides the German and Dutch areas.

Due to the strong wind and the relatively cold temperatures, we decided to take the ferry to the German island Sylt in the afternoon and therefore have the planned rest day there. After a short visit at the immense sand beach, we entered the ferry and crossed over to Germany where we searched for a campground in the centre of the island.