After only little sleep, we strengthened ourselves for our first cycling day in the Republic of Ireland. Since we started late, our goal was only 60km from the campground. After heavy rainfall, the sun was shining again and we could cross the Suir River with dry weather. 12km later, we were welcomed by Adrian’s parents at the campground with a stunning sea view.

Accompanied by André we pedaled with the help of the sun along the coast and enjoyed the stunning view over the rocky coast. The various geological formations, which developed over the last millions of years, were most of the time visible while cycling. After a few kilometres, we met a female Swiss cyclist, who is traveling through Ireland for a few weeks. Shortly before Dungarvan, Adrian realized that something with his rear tire was not right and saw that he had a puncture. Luckily, there was a bike shop a few hundred meters further and the puncture was fixed rapidly. A relatively large metal splinter was in the tyre and pierced the tube. The owner of the shop “O Mahony cycles” sponsored us the repair work of the tube and a few spokes, since we bought two new chains and a tool to remove the cogset. We appreciated the expert advice and helpful tips – thanks a lot! 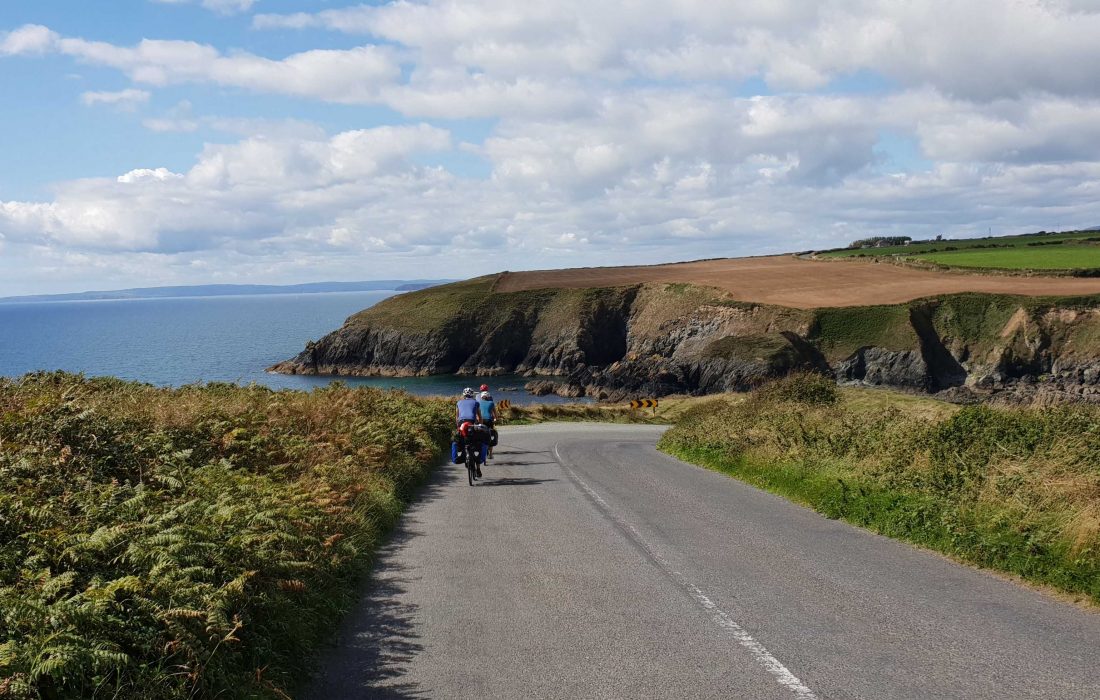 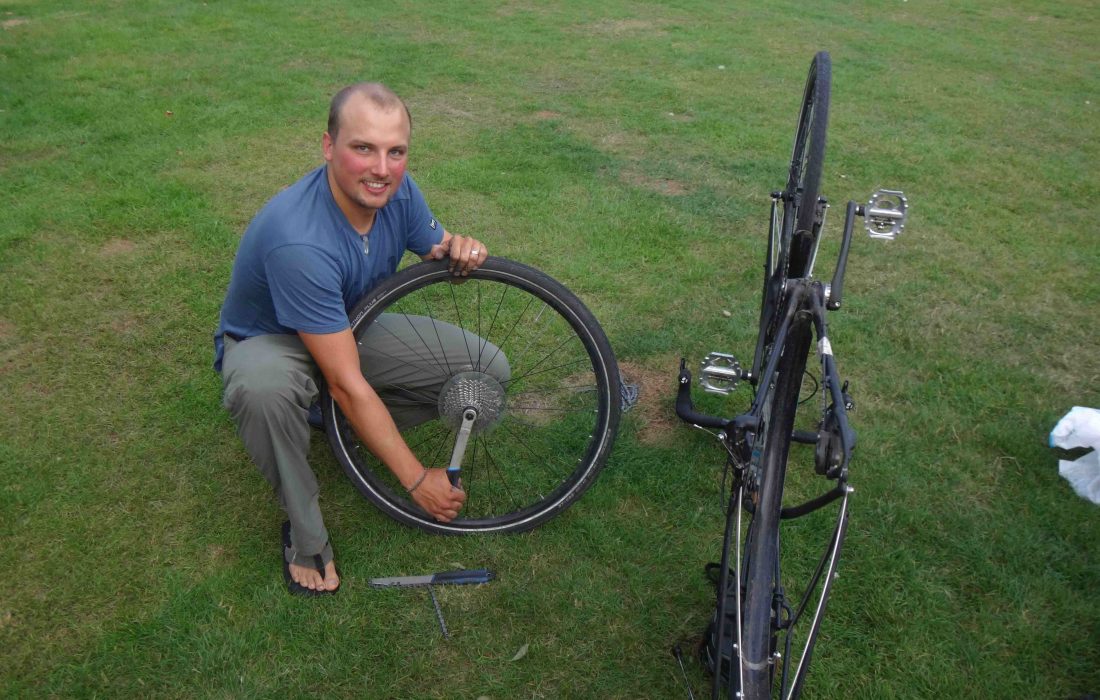 Strong wind gusts and rainfall shook our tent repeatedly and woke us up. Comfortable, we ate breakfast in the large tent of Rita and André, put on our rain gear and started in the direction of Cork. The city did not impress us that much. However, we enjoyed an Irish beer in a typical pub. On the campground, we completed some things from our to-do-list: Change of bicycle chain, writing the diary and organizing financial matters.

After two rather short days, another day trip of more than 100km was awaiting us in the direction of the west coast of Ireland. We cycled through coniferous forests and agricultural regions. The dead straight, long roads were climbing steep and led us down into the next valley. It felt like we were back in Sweden again. After Tralee, we found a campground and were looking forward to the “Älpler Maggronen” with Swiss cheese. 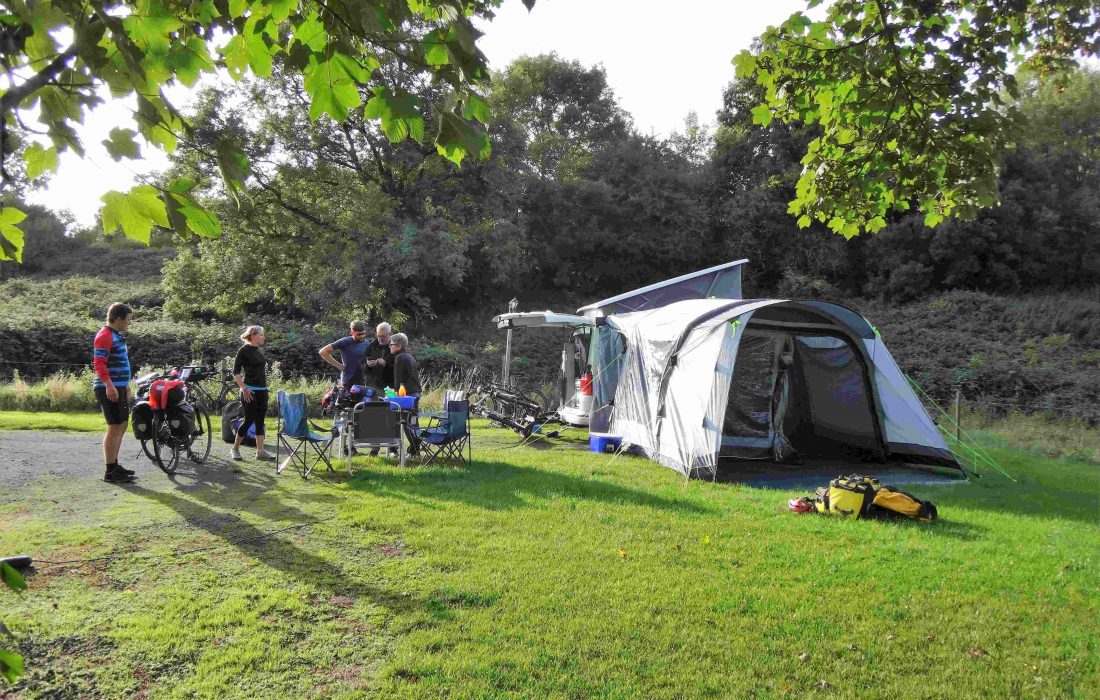 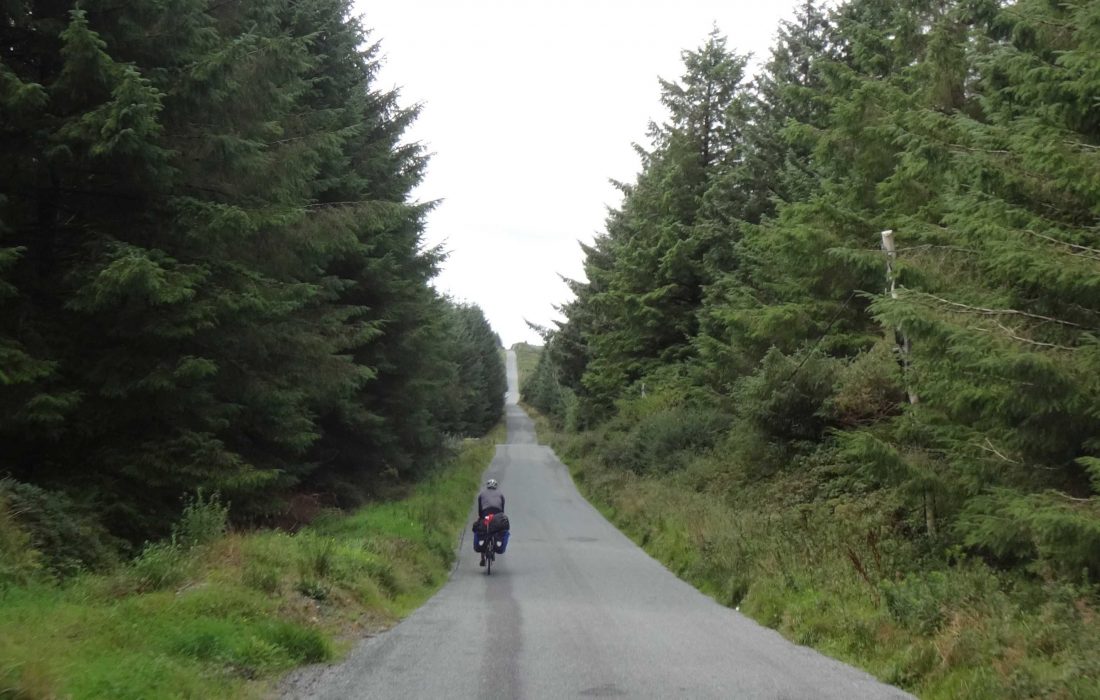 On the hard-earned and first rest day since eight days, we explored part of the “Ring of Kerry”. With the VW California, we drove to the Brandon point, then over the Connor pass to Dingle. In the old fishing village, we ate fish and chips and visited some ancient pubs with an integrated jumble shop. Afterwards, we discovered the Slea Head, where a scene of one of the Star Wars movies was shot. The breathtaking coastal landscape astonished us repeatedly. In the evening, we enjoyed delicious Irish beef fillet and “Rösti”.

The first kilometre, we pedaled along the northern part of the “Ring of Kerry” and visited the beach close to Banna. Today, we enjoyed the first tail wind in a long time and we moved forwards at a huge pace. Like in the previous days, we passed baffled herds of cows and enormous properties.

Well before Limerick, the house entrances were decorated with the flags of the local hurling club, Sporting Limerick and it seemed like there was only one leisure activity in this region. Hurling is a team sport, which has a Celtic origin and is played with clubs and one ball.

After more than 130km, we reached the campground and could refuel the burned calories. Since we left the European mainland, cooler temperatures were usual and shortly after sunset, we had to use the down jacket as a regular heat source.

We used the luxury of the VW-bus again and drove together with Adrian’s parents to Dublin. In the afternoon, we visited the Guinness brewery and tested the most popular Irish beer. During dinner in a typical Pub, we enjoyed the cosy atmosphere. In another Pub with live music, we ended the night.

Supported by splendid sunshine, we visited the trinity university and walked along the river Liffey. After more than six weeks, we said goodbye to Bettina, who joined us for more than 2000km. We really enjoyed the time on the bicycle together. Furthermore, Adrian’s parents left back to Switzerland as well. The culinary support in the last weeks was excellent, thanks a lot! From now on, we have to get along only the three of us again. 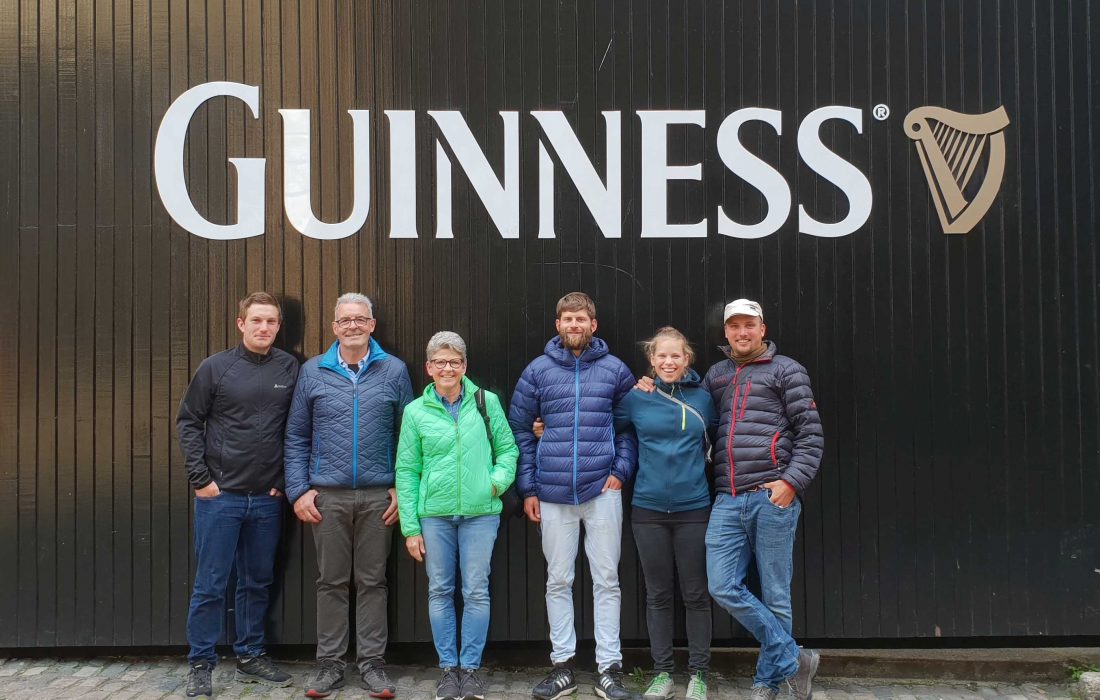 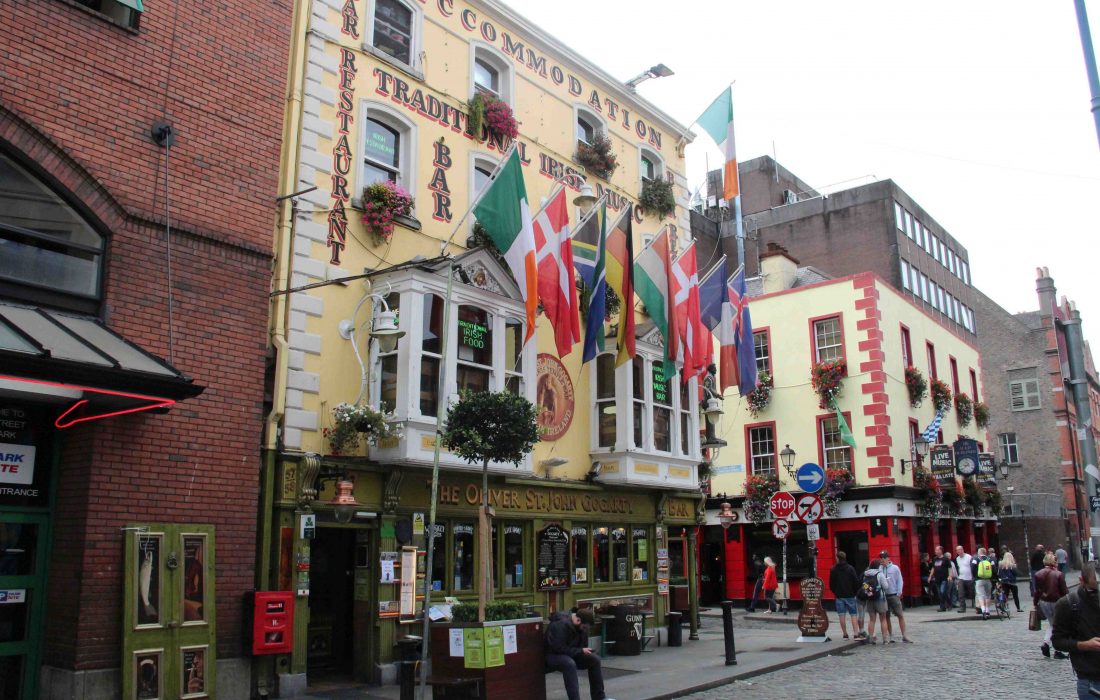 Following a huge portion of pasta, prepared in a bus station, we continued to the coast. There, one of the highlights of Ireland was awaiting us. The cliffs of Moher are impressive steep cliffs, which drop off directly into the white-roaring sea. Hundreds of tourists walked along the trails to catch the possibly best snapshot of the most famous cliffs in Ireland. Many tourist from all around the World talked to us and were surprised how far we already cycled. Today, we reached the first 6000km of our journey, which is nearly 20% of the total distance to Cape Town. 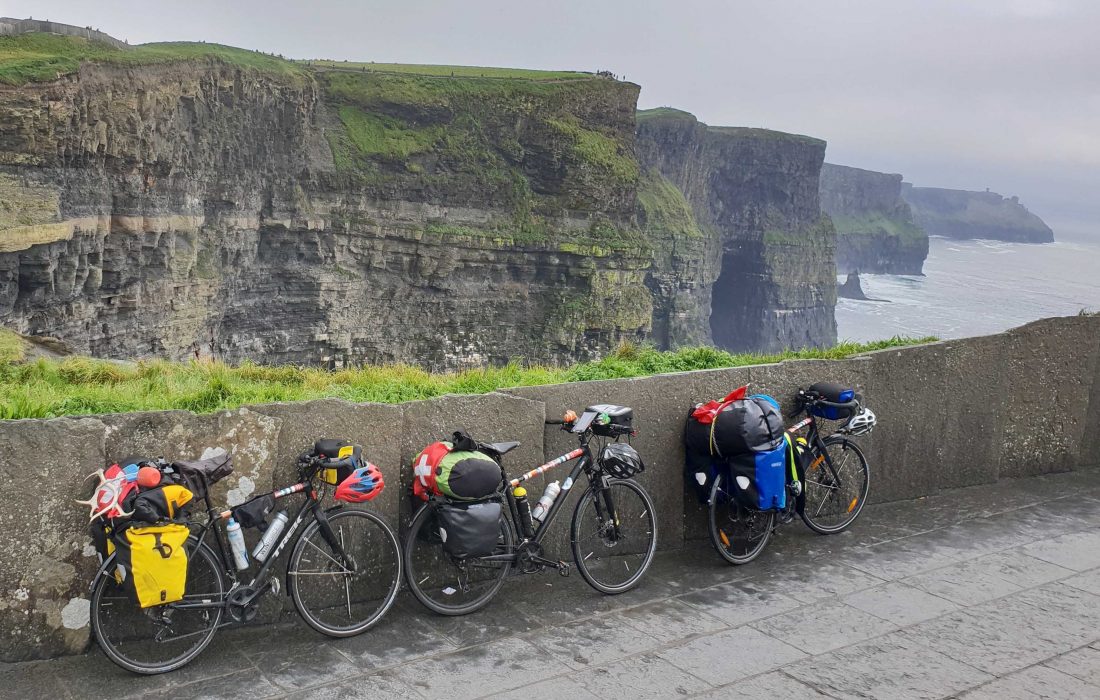 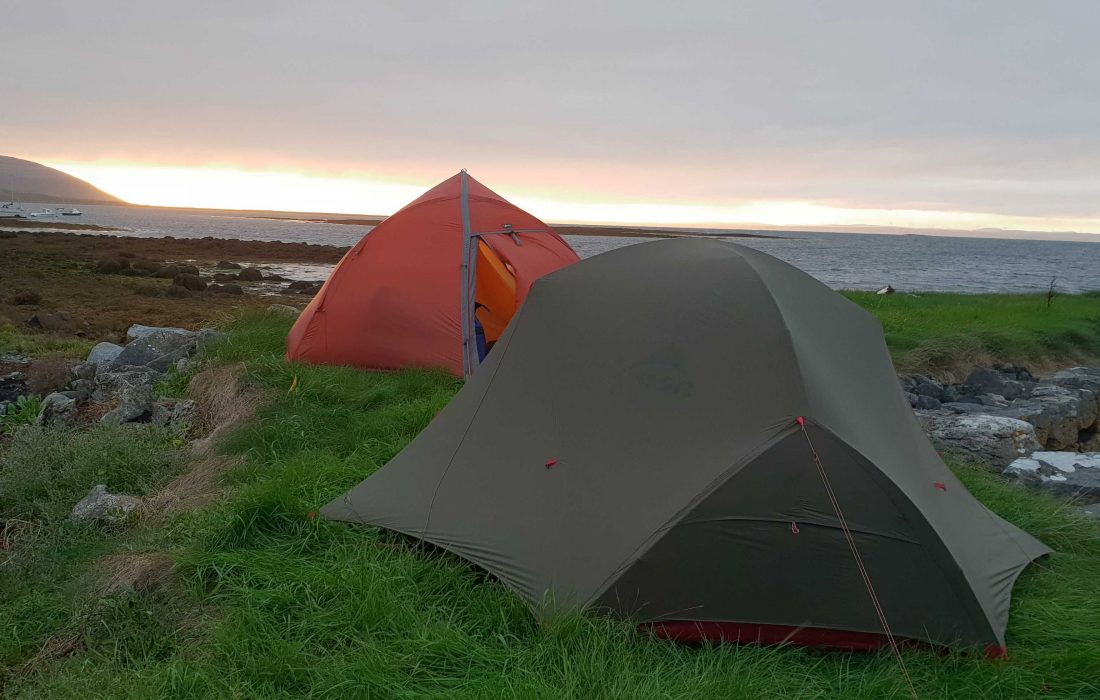 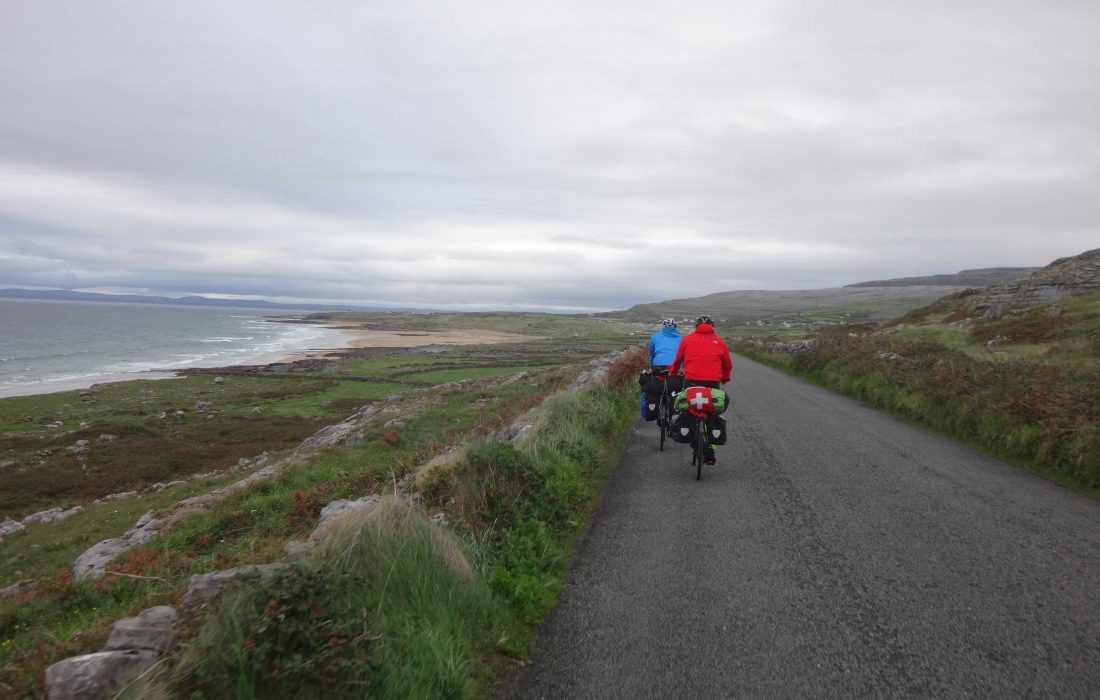 Later, we cycled alongside a limestone formation, which was grinded by the glaciers in the past. In Ballyvaughan, we cooked our dinner exceptionally in front of the supermarket, since it was rain protected. Not even a kilometre further, we found a magnificent spot for our tents, directly by the sea.

Today, we visited the third largest city of Ireland, after Dublin and Cork and cooked our lunch in the calm city park of Galway. During the lunch break, a friendly couple talked to us because they saw the bicycles and were surprised about the scale of our journey. After a fun conversation and some useful travel tips, we left the city and cycled along beautiful side roads. With the support of the sun, we pedaled alongside long stone walls, which keep the many sheep, cows and horses in their territory. In the evening, we asked at a house if we could put our tents somewhere nearby, since we did not know where we could put our tents. The kind family allowed us to sleep in their garden and even brought us some delicious, warm sandwiches.

After rather flat terrain, more hills expected us again today and we passed extremely nice cultivated gardens. Already in England and Wales, but especially in Ireland, all the drivers on the side roads were greeting us friendly and the pedestrians waved at us with a big smile.

Besides a castle ruin, we cooked our tortellini and found a football, which occupied us for a while. After another 50km, we reached the city of Sligo, which is famous for the proximity to the prominent mountain “Benbulbin”. This mountain looks like the Table Mountain in South Africa and characterizes the scenery. We decided to camp directly on the foot of the mountain. Prior to pitching our tents, we walked up to the summit to enjoy the sunset and the breathtaking view. Tired and with soaked shoes, we reached the starting point shortly before 10pm. 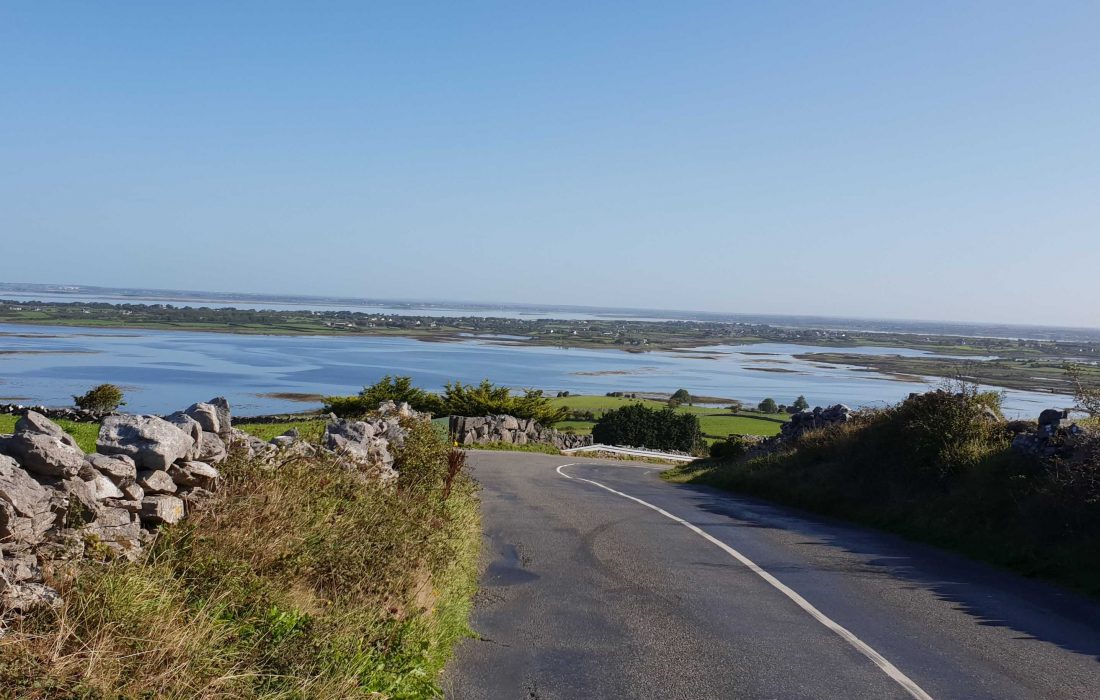 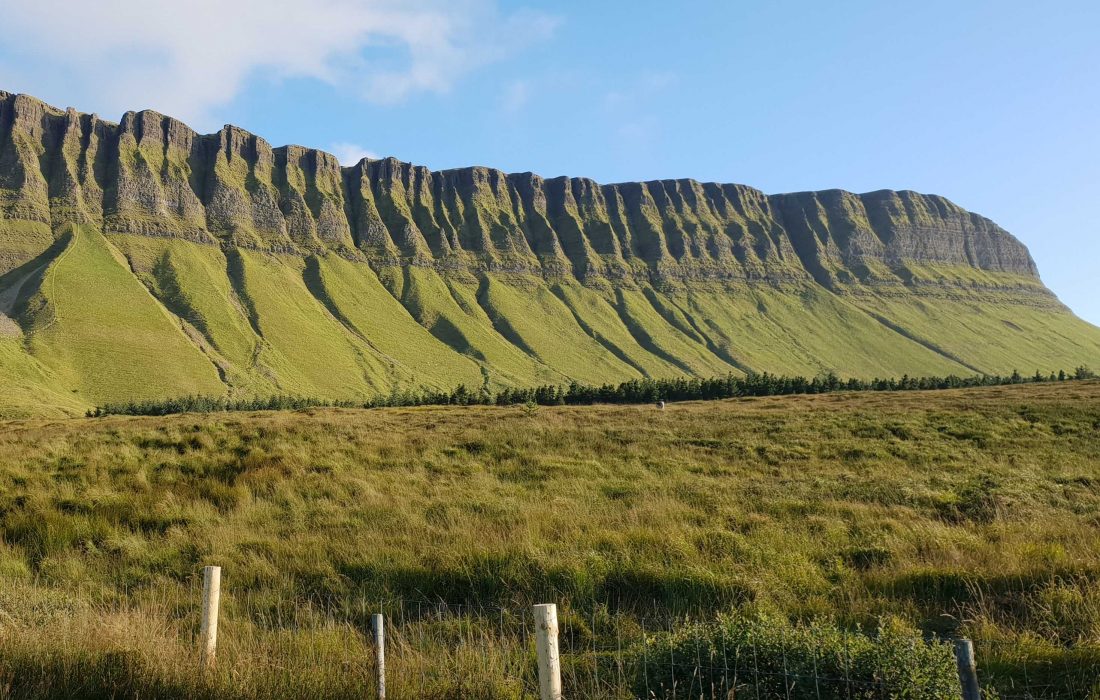 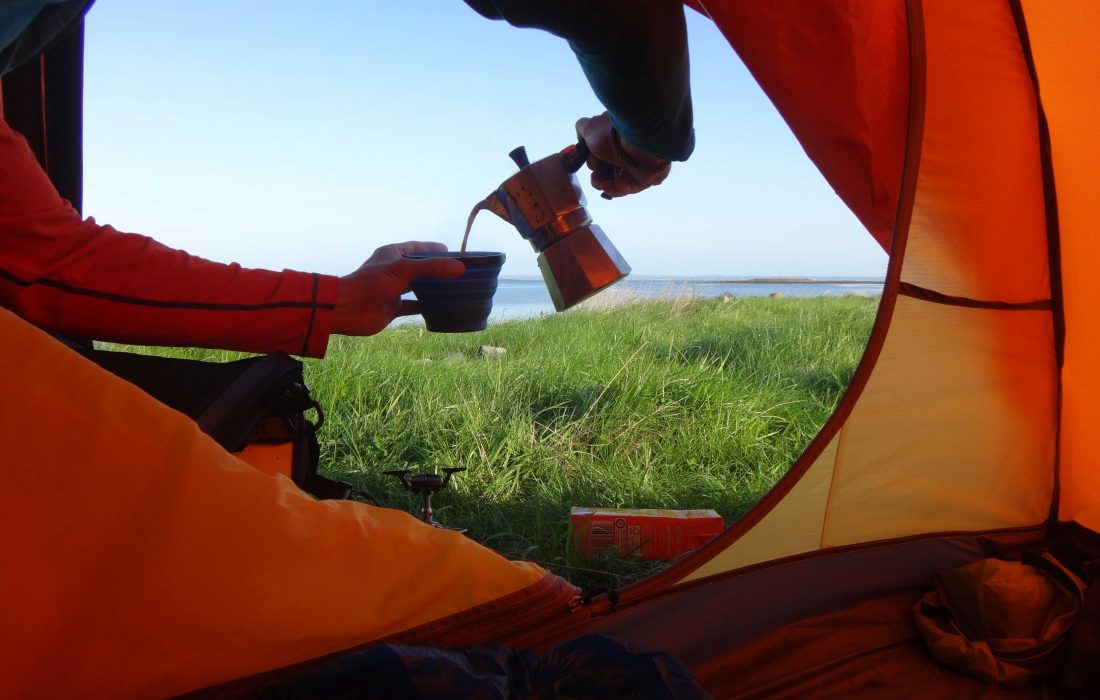 In the North of Ireland, we noticed more frequently, that all the fuel stations sold turf, which we saw drying on the fields in the countryside. After a conversation with young locals, we were told, that the Irish people burn turf to heat their homes. Since there is no other resources, like wood or coal. Turf is the cheapest alternative and almost inexhaustibly available.

Drizzle woke us up and we realized that the mountain range around us was overcast in wafts of mist. Shortly after departure, we washed our dirty dishes in a river and covered ourselves with our rain gear. After a few minutes, the sun was shining and we took all our unnecessary layers off again. Soon, we reached extremely desolate and sparse landscapes, which reminded us of Norway. Following the Irish- Northern Irish border, we cycled along a gravel road without seeing anyone. The weather switched rapidly and improved our changing skills fast. During our lunch break, we met John, a local cyclist, who is training for a crossing of the U.S. The friendly sportsman travelled many times by bicycle himself.

After a while, Adrian realized that he lost one of his shoes, which he tied on the back of his bike to dry. He cycled back and luckily found the missing piece of clothes 5km further. Since we were crossing the border between Ireland and Northern Ireland many times, we hardly knew in which country we were currently cycling. In the evening, we were allowed to sleep in the garden of a barley-farmer. 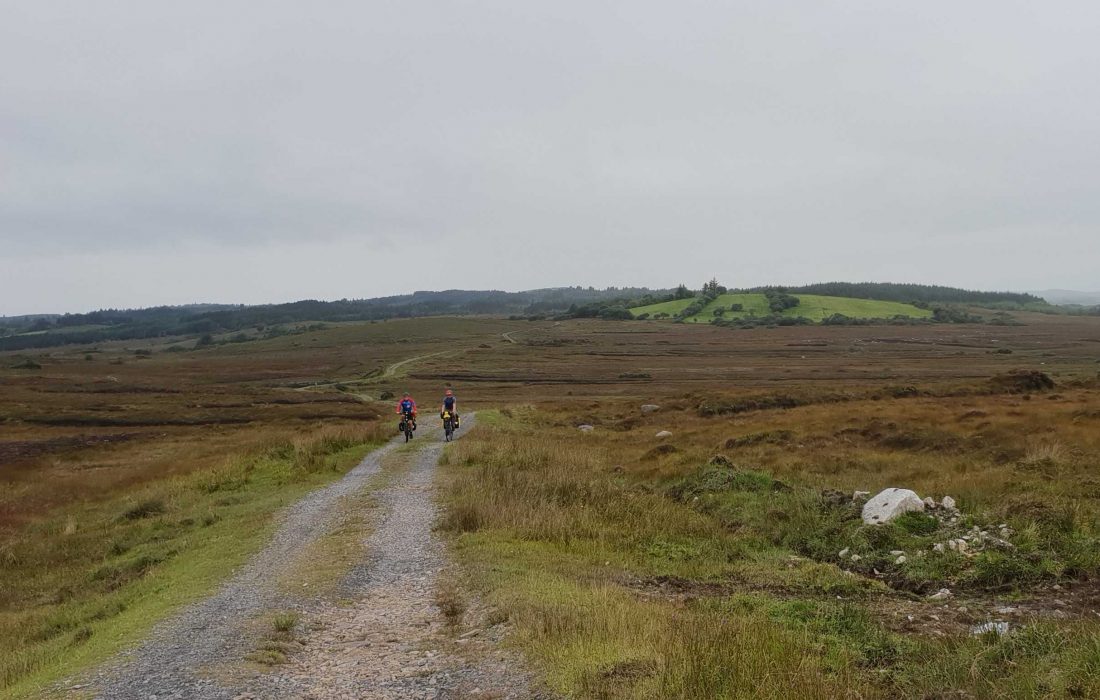 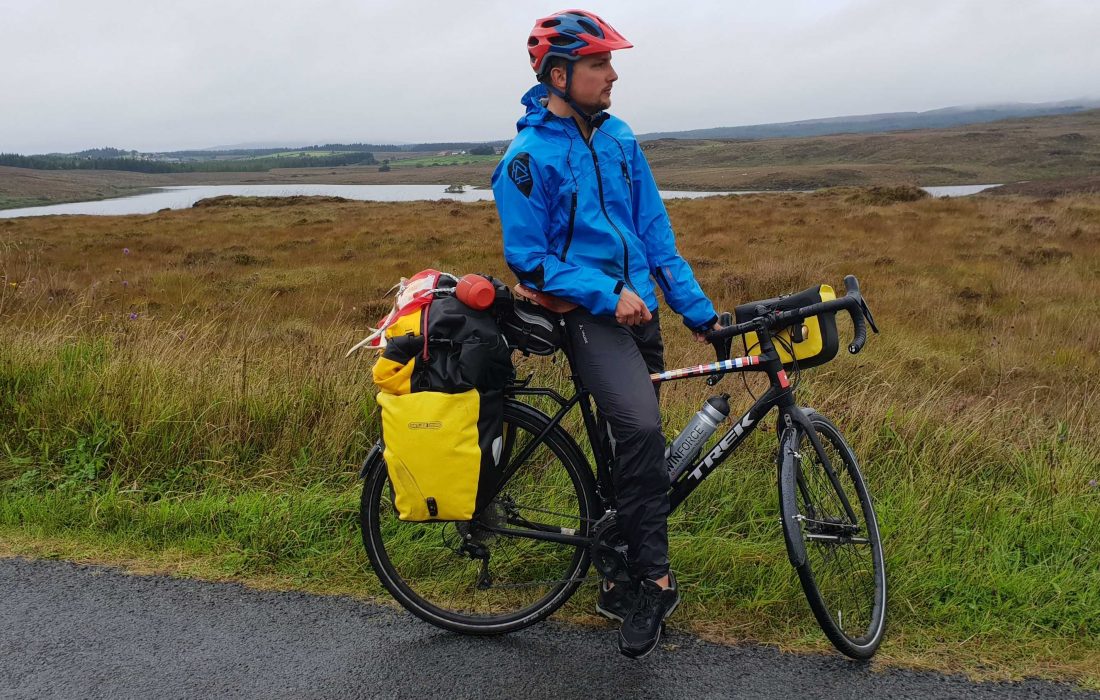 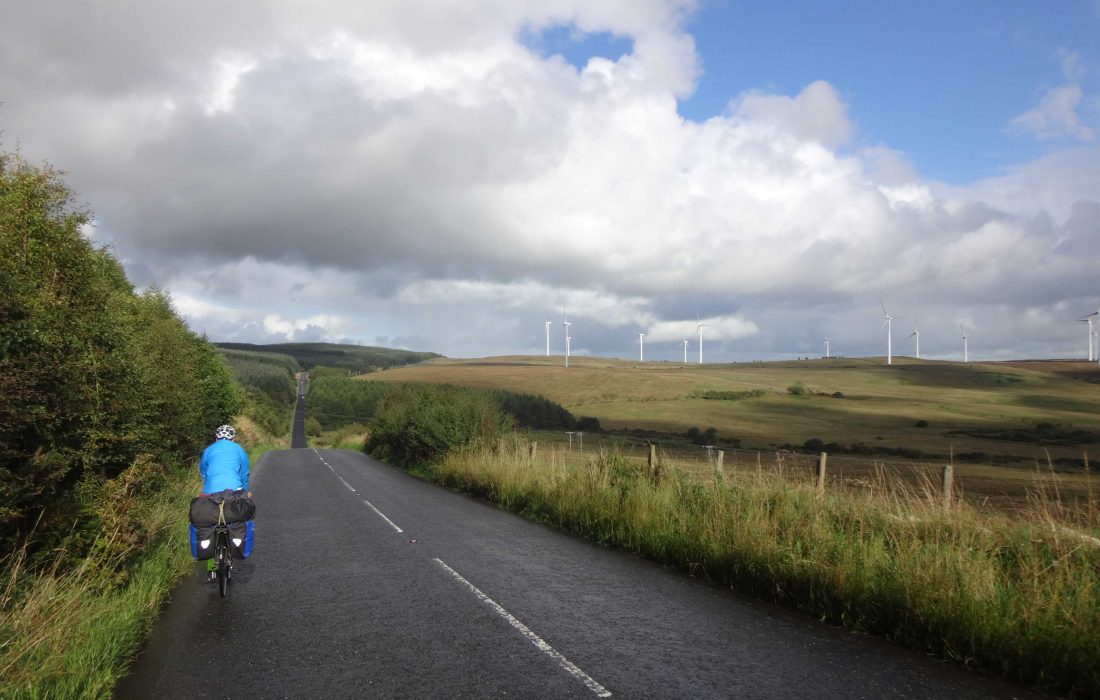 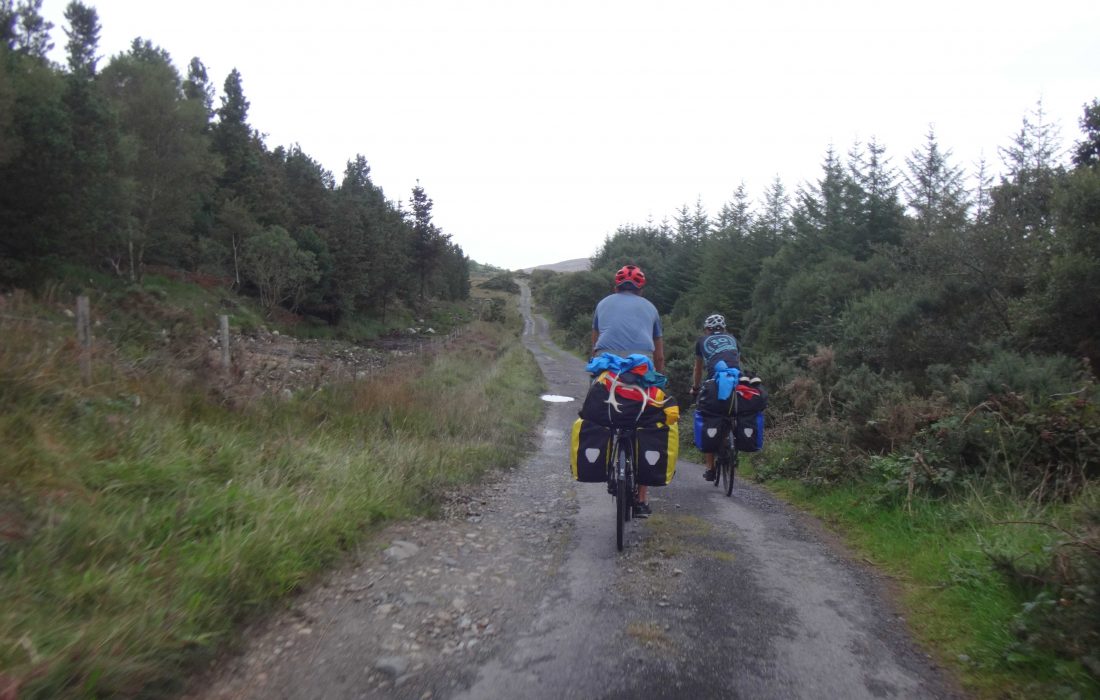