Due to the midnight sun, which we all experienced for the first time, we slept in and started our official first day around noon. The first part of the route we already knew from the day before and was therefore not so exciting. In the supermarket in Honningsvåg we fed ourselves, before we turned to the direction of Olderfjord. After a short amount of time, the first longer (4km) and dusty tunnel of the day waited to be crossed. To our luck, there was not much traffic up to this point and we could cycle next to each other with loud music from the speaker. A few hundred meters after the tunnel the wind got stronger and stronger. At some point, we could hardly cycle forward and had to take breaks or cycled from left to right across the whole width of the road, orchestrated by the wind. We captured this fight with the GoPro camera, but it hardly shows the strength of the wind. A few side-and headwinds later, we reached the Nordkapp-tunnel with a length of 6.8 km, which sometimes leads the road more than 212m below the sea level and is accordingly steep (10%) all the way. Glad to reach the other side of the tunnel, we realized that the wind was still there. Another cyclist passed us just after the tunnel searching for a place to spend the night and found it in an old container on the side of the street. Another 10 km later, partly with tailwind, we decided after a short debate to put the tents beside a small cottage a bit off the road. The strong wind would have made it almost impossible to assemble camp in the open field. Protected from the wind we enjoyed a good night sleep and recovered from the first exhausting day southwards. 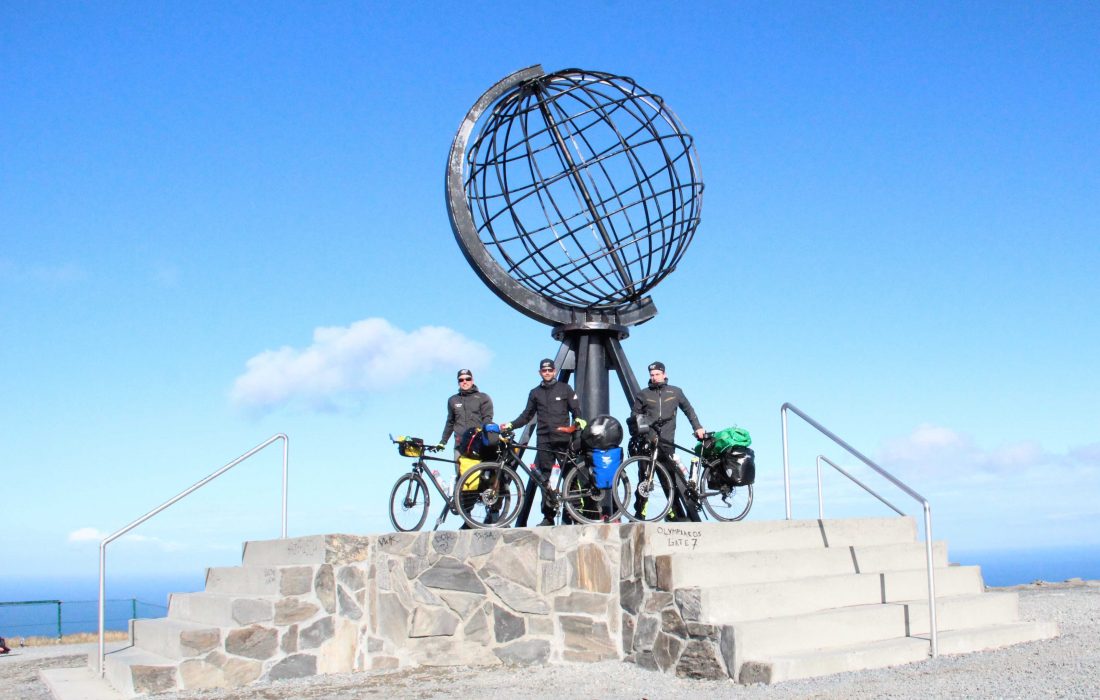 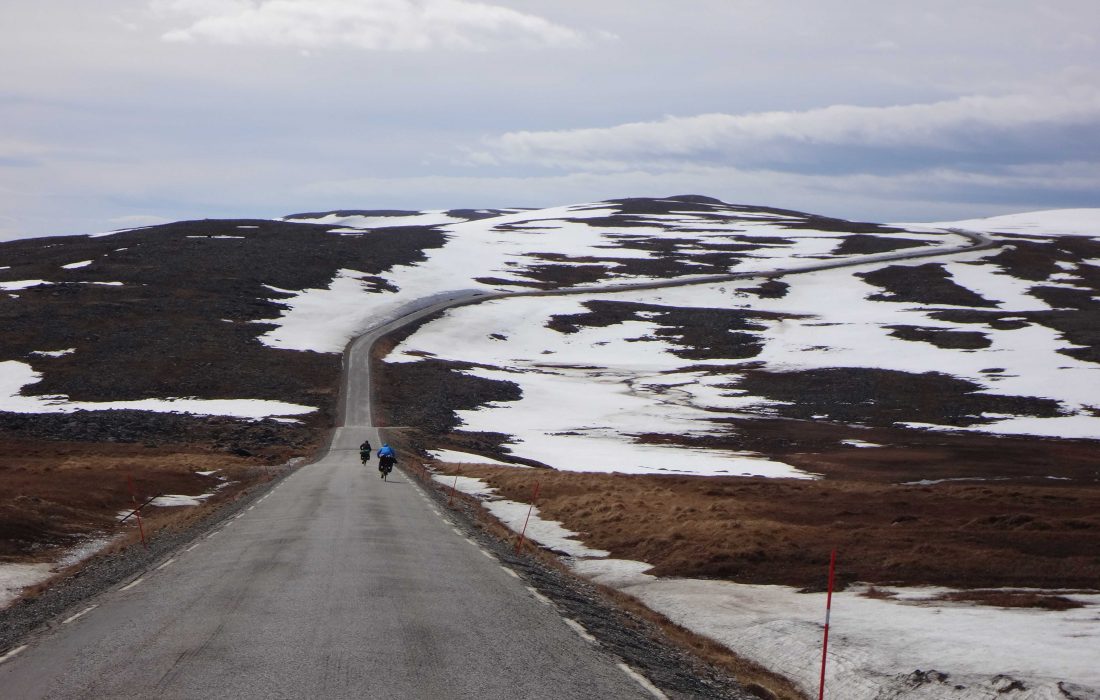 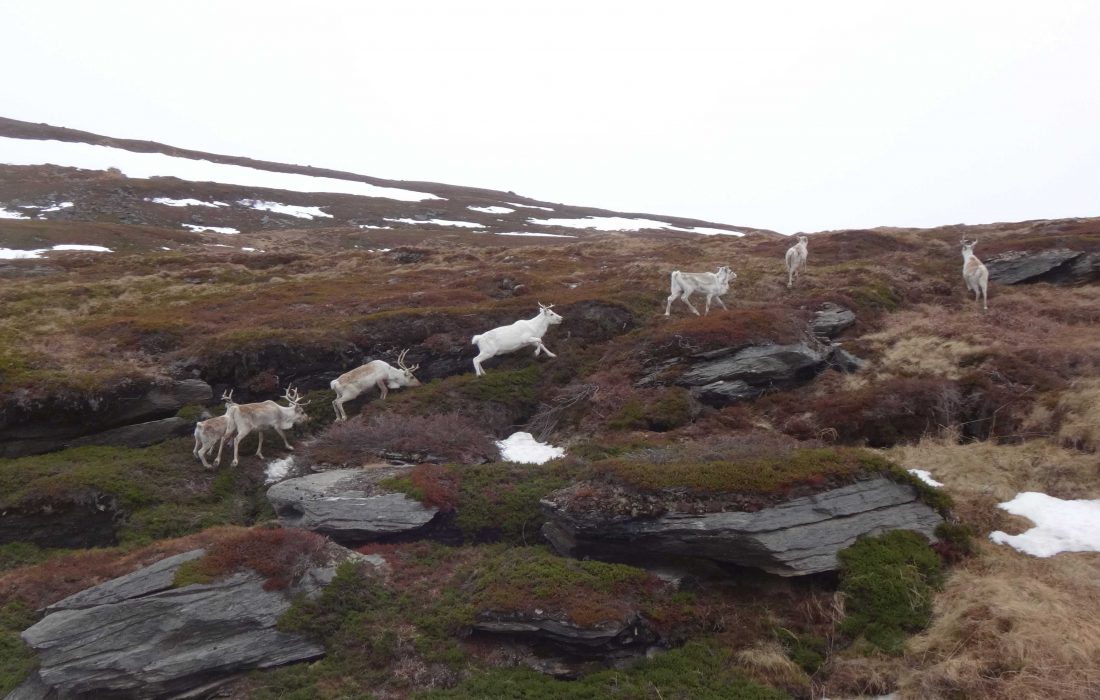 Strengthened with breakfast, our daily workout-routine was next and we used the nearby snowmobile as a training device. After the first few minutes of cycling, we realized that the wind will be a steady companion. With strong kicks we fought against the wind, a bit later rain joined the party. Other permanent companions were the reindeers on the side of the road, which ran away, as soon as we got closer to them. At some spots in close proximity to the coast, the wild animals flew in suicidal ways across either the road or close along the cliff. In Olderfjord we threated ourselves with a delicious burger and fries, since the only shopping opportunity, a shop next to a fuel station, was closed. With new energy, we cycled some more kilometers away from the seaside into the hilly inland of Norway in search of a comfortable place to camp.

In the pitched tent, we followed the final game of the World championship of ice hockey, Switzerland against Sweden. Despite the missed chance of a gold medal, we celebrated the awesome effort of the Swiss team with a big sip of whiskey and went to bed.

The sun woke us up and for the first time, we started cycling before noon. The permanent daylight managed to disorder our sense of time and the day-night-rhythm. Already tired from the last two days, the first part of today’s route went up a mountain pass. From the top downhill, we had a strong headwind (how else could it be) and we really had to pedal hard. In the village after the pass, we cooked lunch, relaxed and started cycling towards the next mountain pass, which was even tougher. The scenic, beautiful road with a river, which meanders along the valley and the snow-covered hills, was ascending for many kilometers and felt like forever. The (head) wind accompanied us steadily and demanded all we had left from our (not so fresh) legs. Shortly after the top of the pass, we put our tents and enjoyed the silence around us.

This morning we had an easy start, since we achieved a lot on the previous day where we cycled almost the complete ascent of the Sennalandet-pass. During the descent from the pass to the seaside, the landscape changed from sparse vegetation to a green spring like environment. The beautiful forests surrounding us motivated the group for the days to come.

In Alta, our last main city in Norway, we stocked up our supplies and demonstrated the local community our cooking skills in a bus station. After the preparation of the fish sticks and some fish burgers one could think we worked in Mc Donald’s.

In search for electricity and internet, we aimed for a building which seemed to be a restaurant, but enclosed itself as an elderly home. After a longer break in a burger place, we cycled along beautiful, calm coastal roads to stop at a “quiet” barbecue place at the seaside. This scenic camp spot was recommend by a local family. 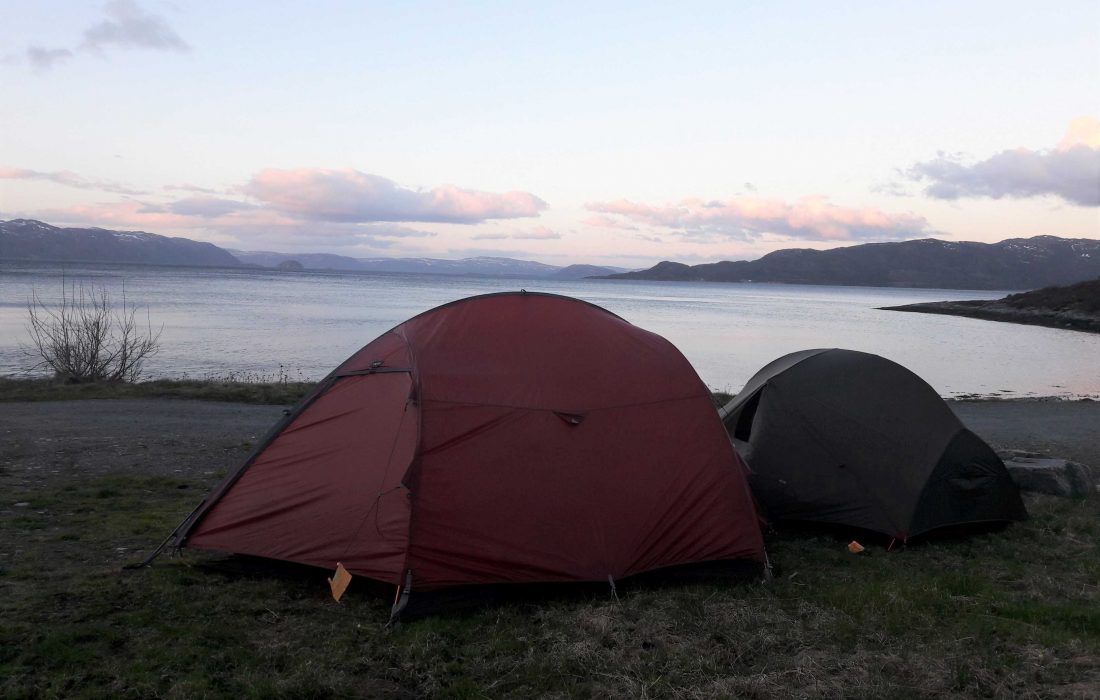 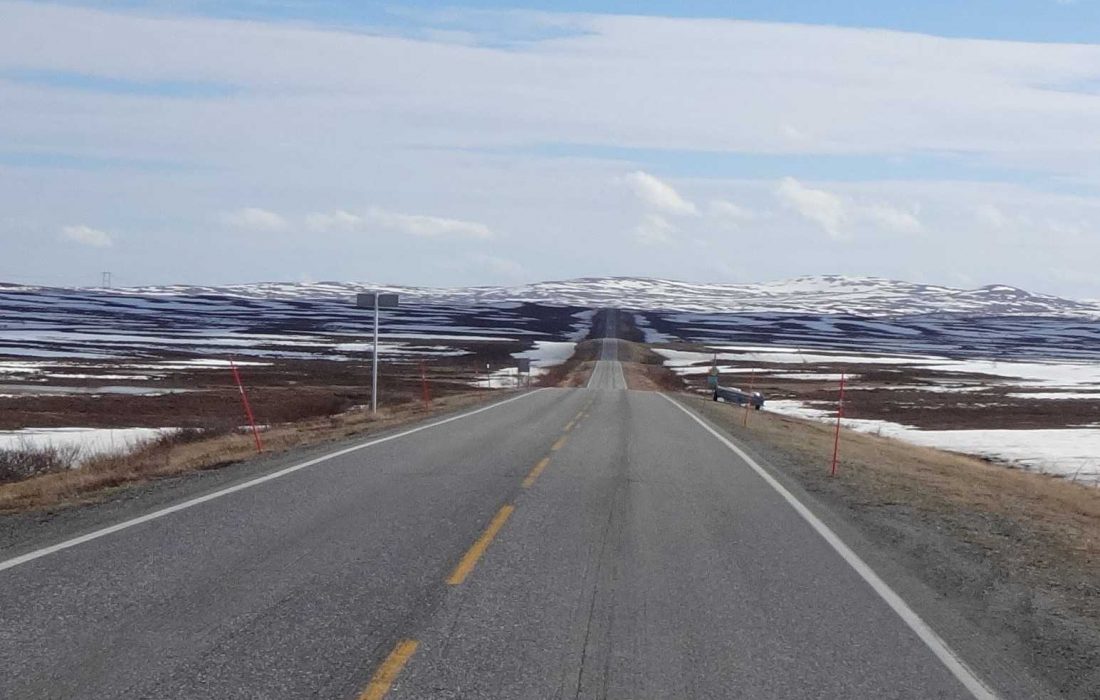 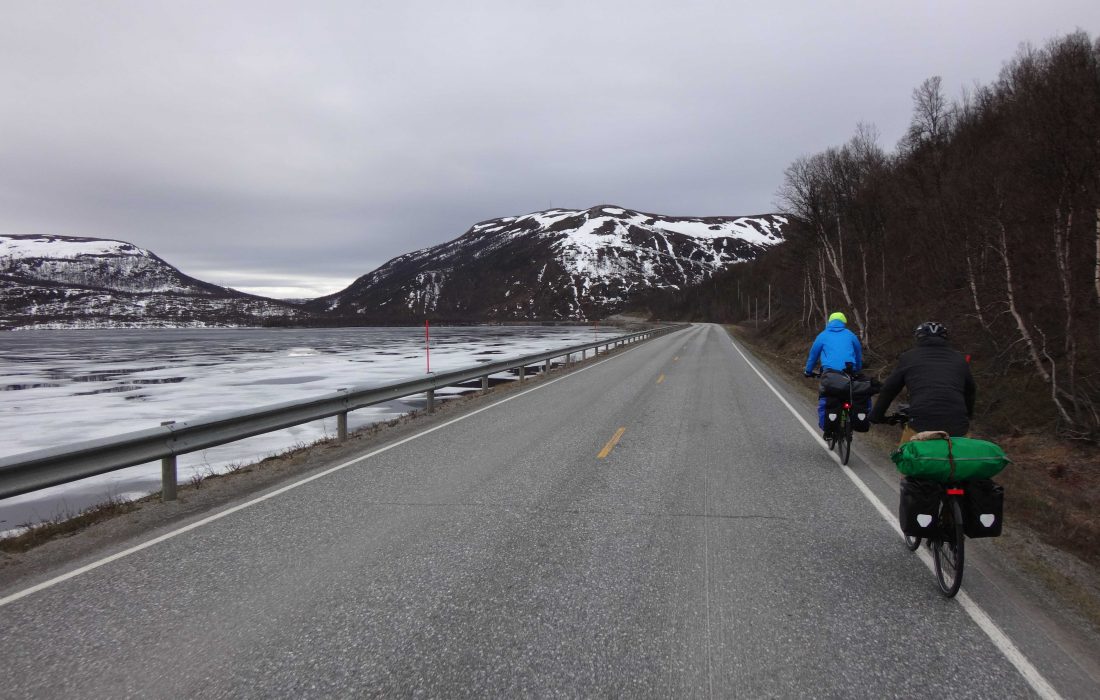 Today, we achieved the first, rather small milestone in our project. We reached 300 km and therefore 1% of our total distance (30’000 km).

Already at the beginning of the day, the weather changed every 15 minutes and we decided to wear the rain gear from the start. The route was for Norwegian conditions rather flat and followed endlessly the coastlines of a fiord. The sudden sleet surprised us and made the journey less comfortable, since the wind was obviously present as well. The unusual weather conditions accompanied us the whole day, so we never got bored of them. In search of the first shower since we were in Tromsø a week ago, we passed a couple of campgrounds full of hope to find a better one later on. After crossing an impressive and exhausting pass, our risk taking nature was awarded with a beautiful campground in Sekkemo. The long-desired shower motivated us for the days to come and gave us a feeling of renaissance.

Following an easy up and down along stunning fiord coasts, a sudden long, steep ascent was ahead of us. Already during the climb of the pass, we were rewarded with an astonishing view over the peaks and islands. The descent was ruined, as many times before, by strong headwind and did not let us recover that much.

As on previous days, local fishermen presented their caught stockfish hanging from typical wood constructions. The stockfish are exposed for a long period of time to the harsh Norwegian weather until they are dried.

At the time we were already tired, we realized that we had to pass a tunnel, where it was forbidden, to cycle trough. In this more than 5km long tunnel, we noticed our first breakdown. A spoke on Fabians bike broke and produced a noticeable noise in the already loud tunnel. At the campsite, we replaced the broken spoke and relaxed in our tents. 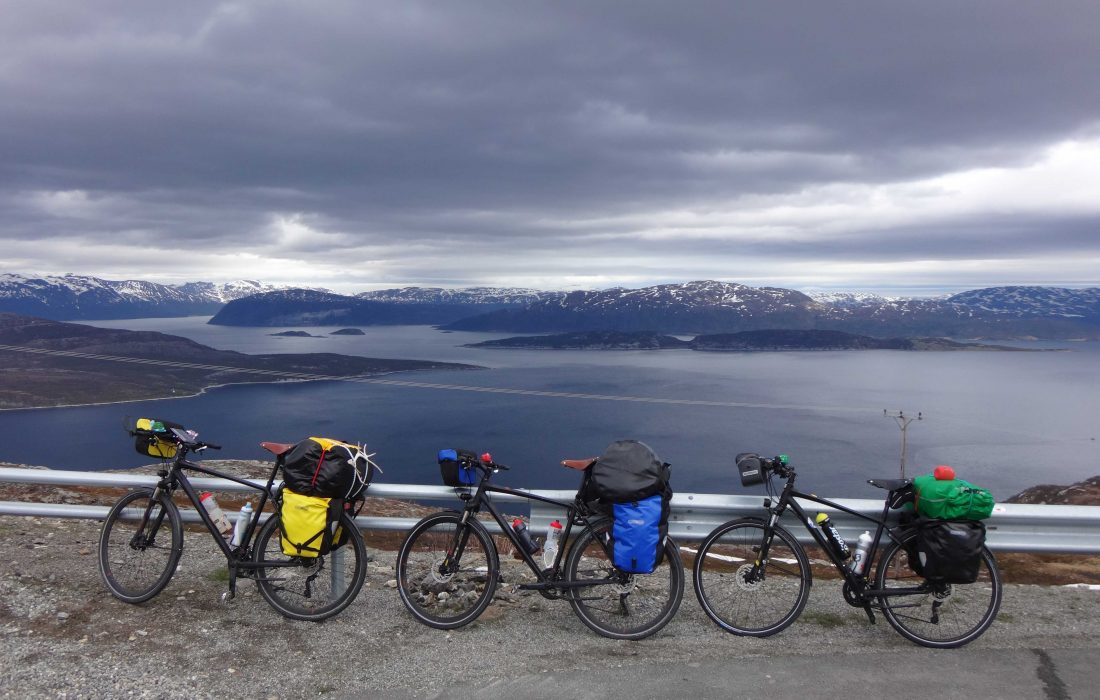 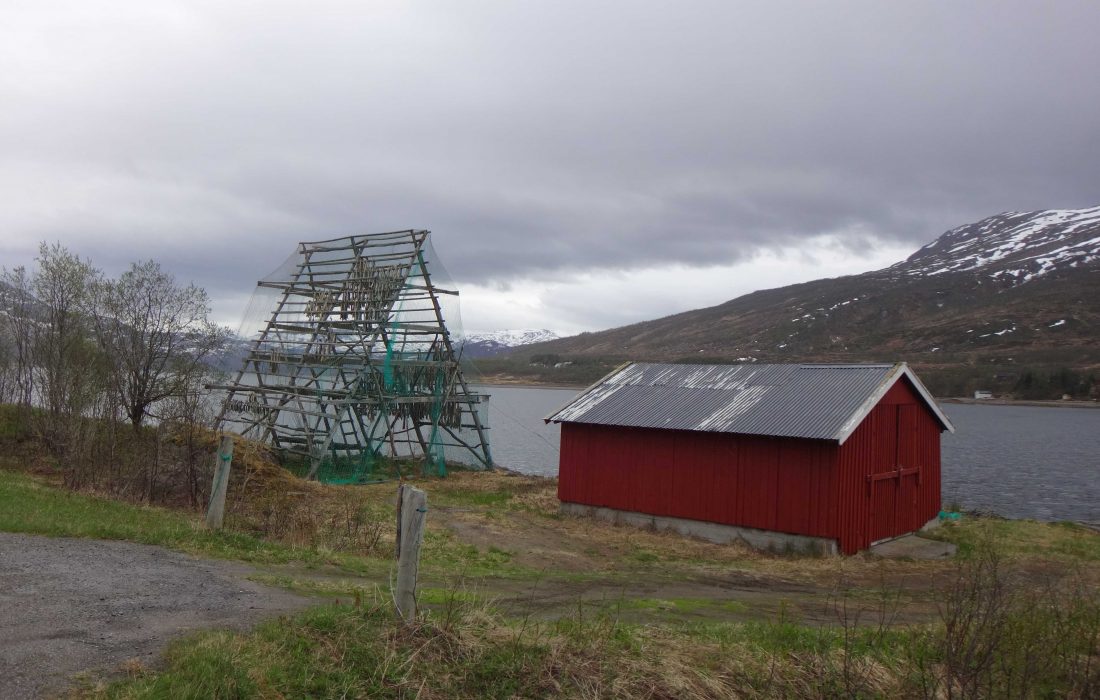 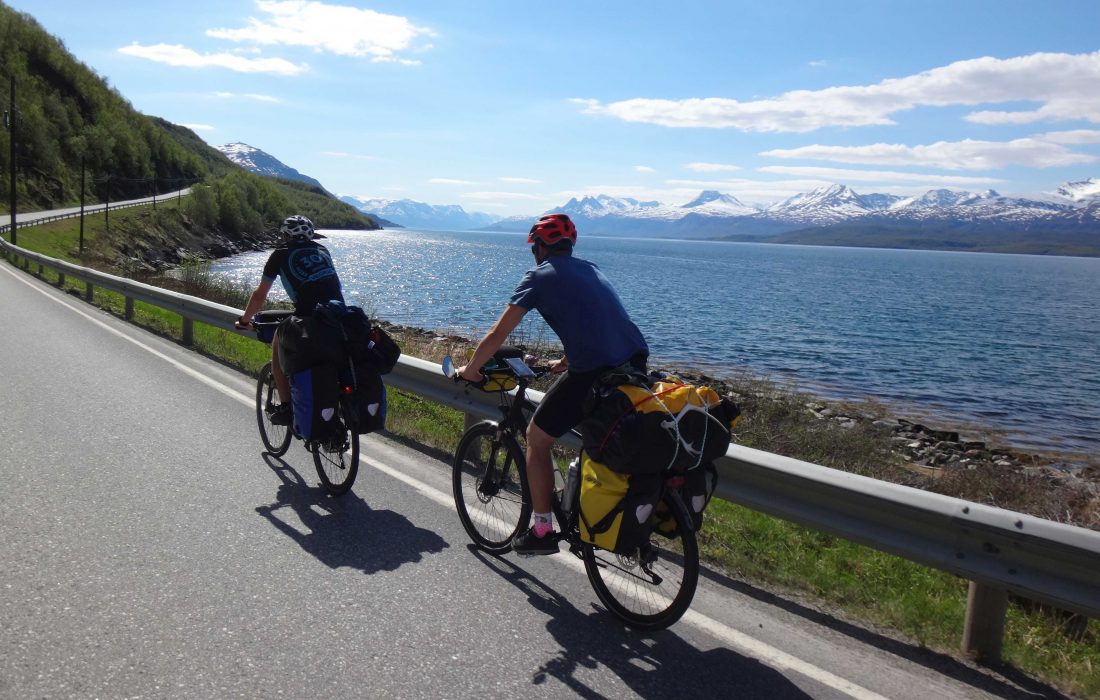 The 7th day on the bicycle started with splendid sunshine and a funny encounter. A lively, youthful, German guy from Bavaria (Link), who walks, yes-WALKS! Walked along the road and we exchanged experiences from the previous days. He modified something like a stroller in a way that he can stand on it and reach up to 30 km/h downhill. In this way, he achieves astonishing 60 km a day.

Thanks to the strong sun, we enjoyed the warm temperatures and cycled mostly with T-Shirts and shorts. Today’s route led us around a humongous fiord, which meant a detour of 45 km. If there was a ferry connection it would have been, only 4 km. (see picture). As we arrived on the turning point, we ate lunch and started a conversation with a group of Norwegians who were on the way to Tromsø for a political event of their party. The men were, thanks to the beers in their belly in the best mood and very interested in our project. From the start of the day until the finish of the fiord on the other side, the weather conditions were perfect and we had no wind at all. However, for the last kilometers on the Norwegian coast, strong headwind blew into our faces and sucked all our leftover energy out of our bodies. Despite of all that, we reached Skibotn and were proud to cycle more than 100 km in one day for the first time on this trip.

The goal for today was to reach the small village of Kilpisjärvi directly after the Norwegian-Finnish border at an altitude of 600 a.s.l. Through the cycling community Warmshowers, we found an accommodation for two nights with a New Zealand-Finnish couple. The route to this village led us through a majestic valley, which was climbing high up into to the mountains. The scenery changed rapid from pine forests to single birch trees and finally to a sparse landscape with bushes and dry grassland. Shortly before the pass, we cycled passed a completely frozen lake, to later cross the unspectacular border to Finland. During the crossing of the Finnish border, we played the Finnish national anthem loudly on our speaker. This tradition we would like to keep until South Africa.

Welcomed by Gareth and Elina, we moved into the caravan, which was our place to stay for the next two nights. For dinner, the friendly couple cooked us some typical Finnish meal with reindeer and mashed potatoes, which was delicious. Later that night we comfortably relaxed in the caravan and watched the heavy snowfall outside. 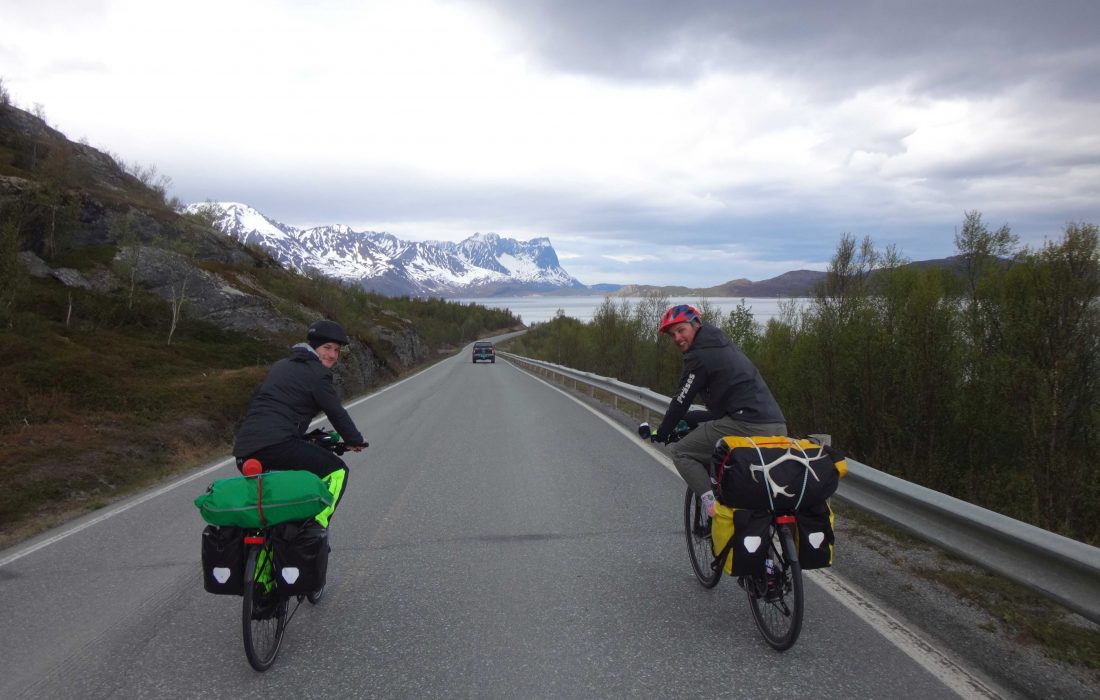 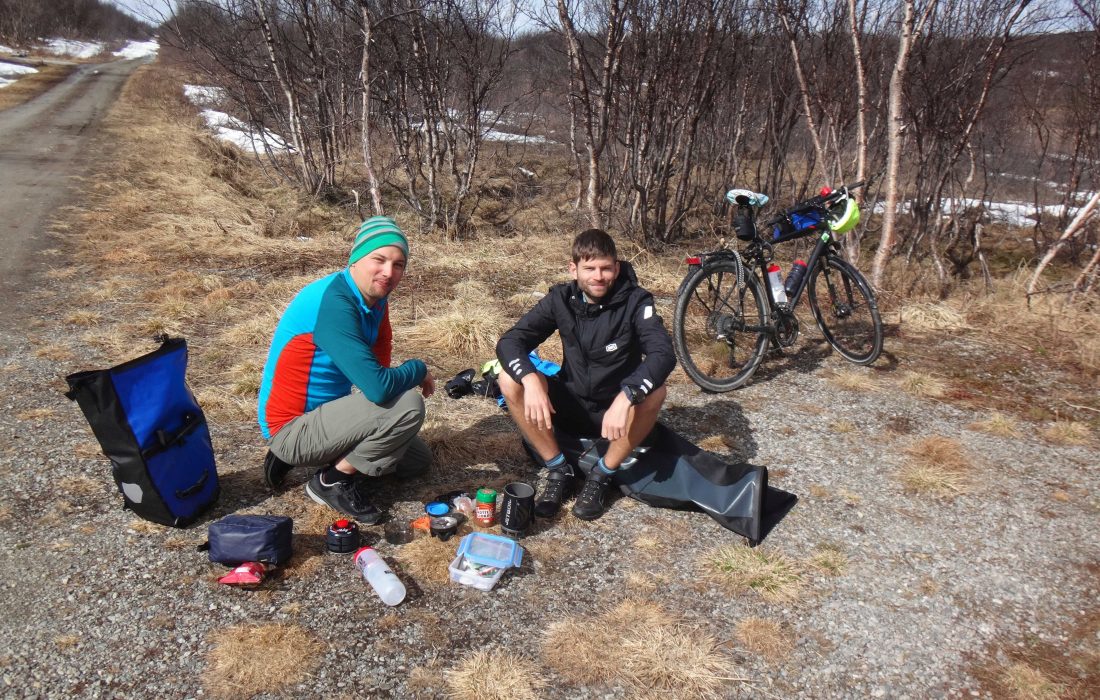