After one of the coldest nights on this journey, we forced ourselves to get up surrounded by temperatures around the freezing point. In the beginning, the pass road was relatively flat and was increasing in steepness later on. Suddenly, a car with a trailer overtook us with a concert of honking horns. Soon, we realized that it was Bruno and Antoinette. A couple of days ago, we arranged a meeting point with the godfather of Fabian and is wife in Andorra at a campground.

To our big surprise, there was a huge convoy in front of the border to Andorra. We cycled to the first car and squeezed ourselves in front of it, to safe some time. For the first time at all, we had to show our passports when crossing a border by land and were surprised again. Later, we found out that Andorra is not part of the Schengen Agreement and conduct intensive border controls. Andorra is furthermore not a member of the EU, but owns a special status, which allows them to issue Euro coins.

In «Pas de la Casa», we filled our water bottles and realized quickly, that there are countless tobacco and alcohol vendors. Because there is no taxes on those products, many day tourists travel to Andorra for shopping. On the top of the pass (Port d’Envalira) we were glad to reach the highest all-year opened pass in Europe and asked ourselves if one needs a Go-Kart track at 2’400m. After the very long downhill into the capital, we pedaled the last meters uphill to the campground. During a delicious dinner, we had nice conversations and enjoyed the new visitors. 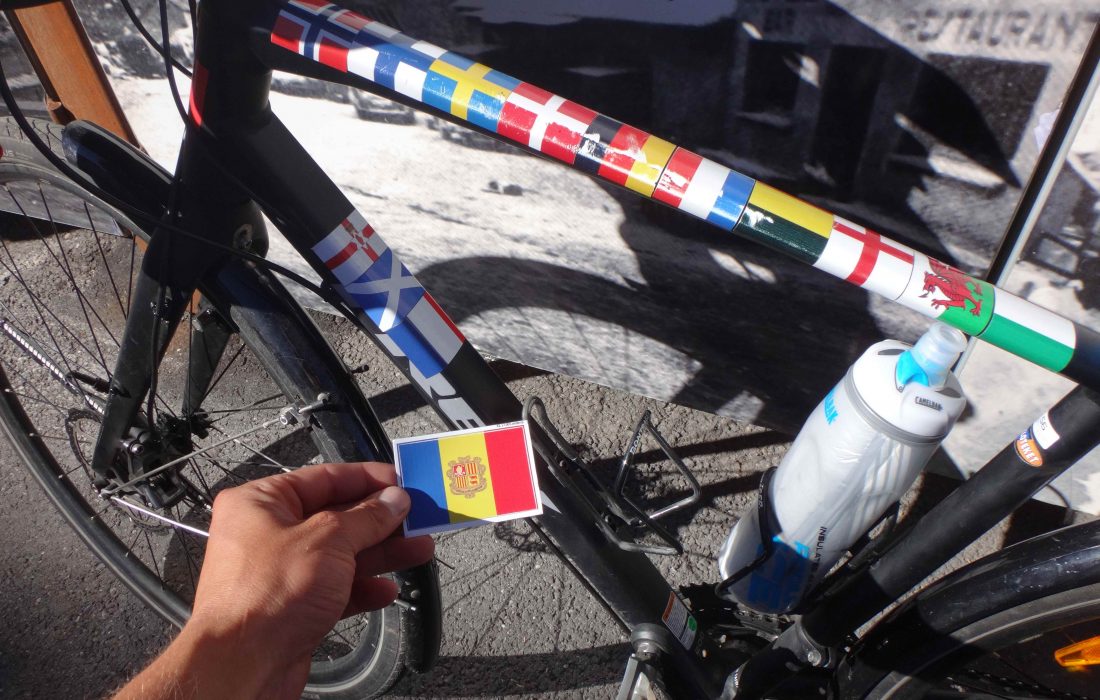 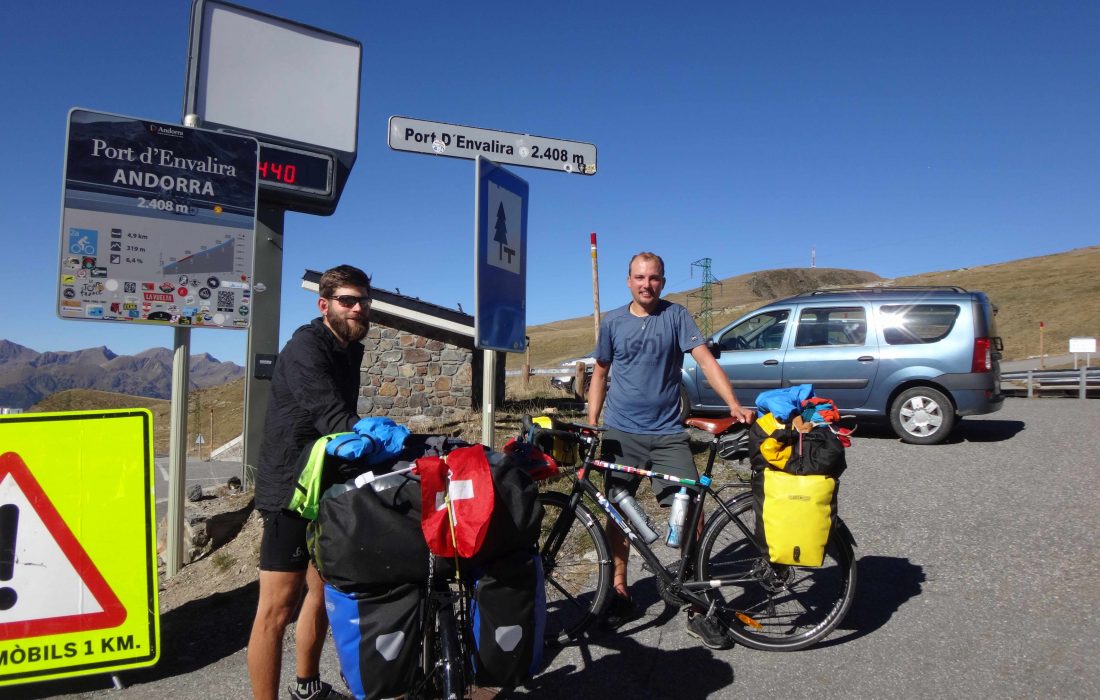 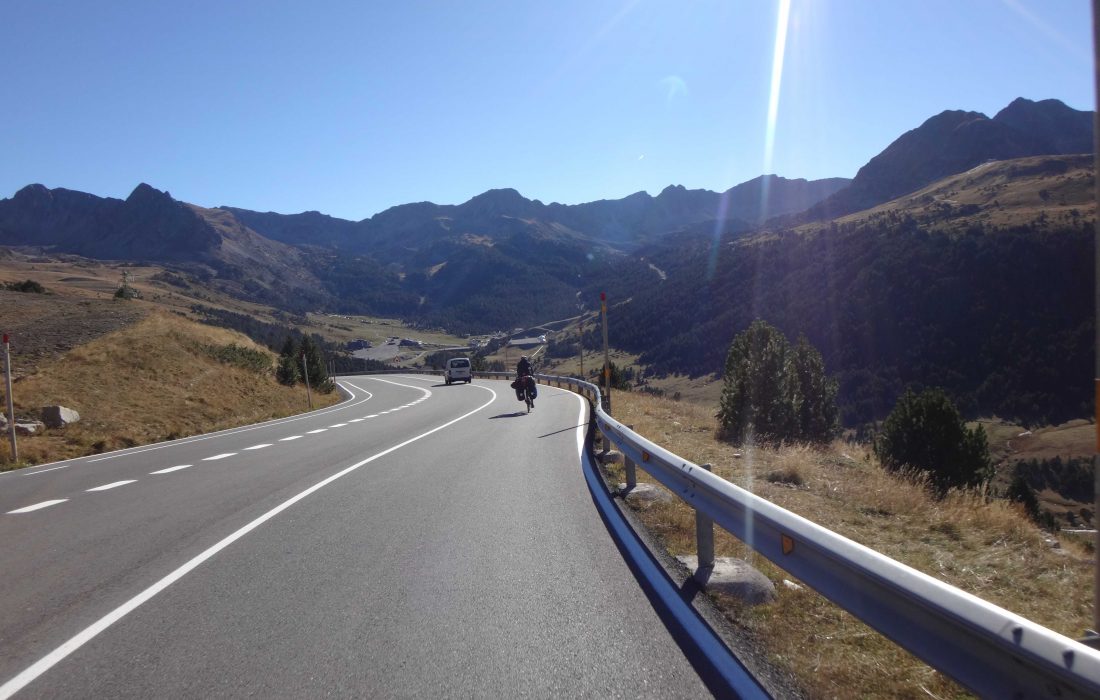 We assume most readers do not know much about our 11th country, here some short information:

Andorra is one of six microstates and was founded in 1278. As the largest microstate by area, Andorra is located in the eastern Pyrenees between France and Spain. The Catalan speaking principality is the only country in the World, which is governed by two foreign people in the function of the head of states. The French president and the bishop of Urgell in Spain govern in a diarchy. Many tourists travel here because of the cheap alcohol and tobacco. Furthermore, there are many winter sports installations in this small country.

After we digested the highest pass of the Pyrenees relatively easy, we dared to go on a recovery hike the next day. By car, we drove until we reached 1’800m and started our hike to the “blue lake”, which laid on approximately 2’400m. Perfect autumn weather, warm temperatures and the fascinating mountain scenery helped us to enjoy the long missed mountains. After the almost 9km long hike, we were treated culinary by Bruno and enjoyed the cozy atmosphere in the campervan.

Since a longer time, we wanted to buy a new camera and that is why we drove into the capital. Relatively fast, we found a model from Panasonic. After a few degustations of local food specialties at the market, we relished the mountain air on the campground again. 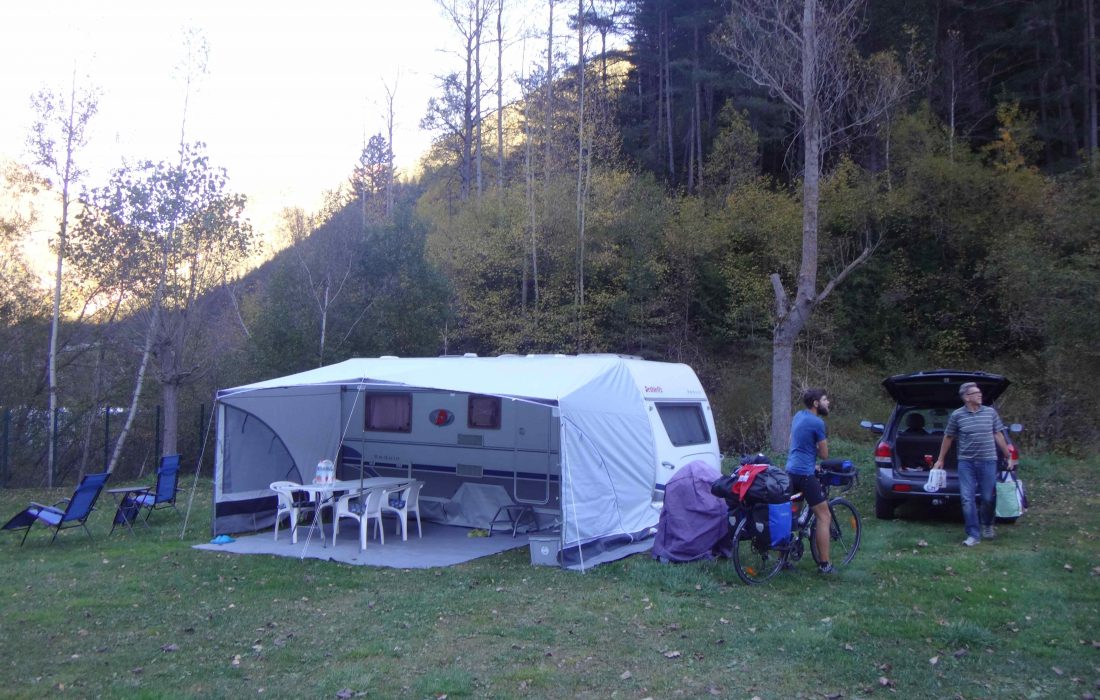 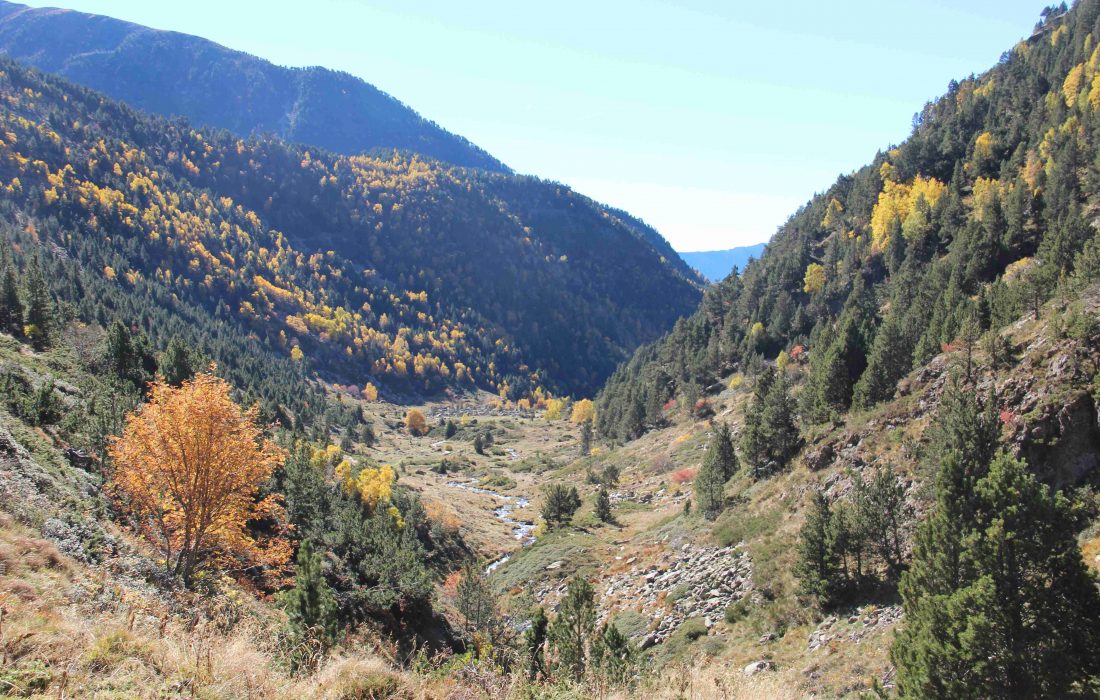 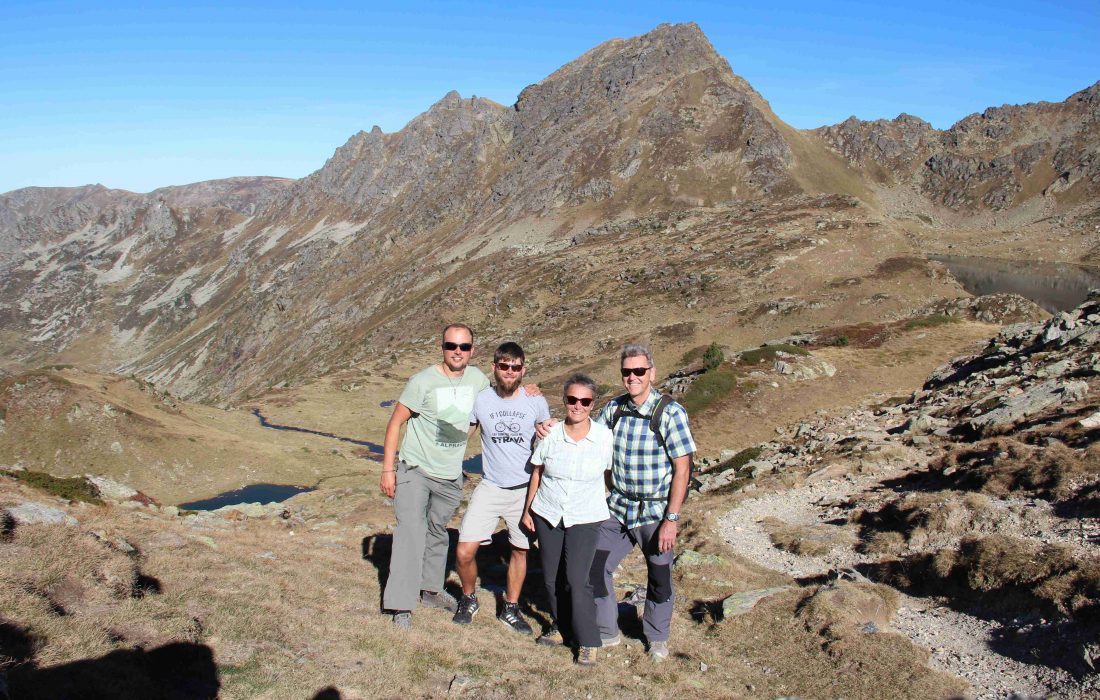 The weather forecast predicted an extreme cooling and bad weather for the next few days. In the night, it started to rain and did not stop until we woke up. The first mountain peaks were already covered with snow and the snow line got closer and closer. We were fortunate to have climbed the mountain pass a few days ago and happy to leave the Pyrenees. With cold fingers, we cycled down to Andorra La Vella. In a fast pace we left the cities of Andorra covered with concrete and mainly built for tourism behind us and crossed the border to enter our 12th country.

The road led us through gorges and stunning rock formations and we steadily lost altitude. After a water reservoir, we cooked a portion of pasta next to a fuel station and were happy that the rain stopped. We passed a burning barn, which nobody tried to extinguish and soon after reached our arranged overnight spot. Like the last few nights, we were treated with excellent food and company.