In the afternoon, we left the luxury again and cycled on the chaotic roads of Yaoundé, to leave the city. Shortly after leaving the capital, we already saw lush rainforest behind the villages and the region definitely got more rural.

After we successfully finished the bend to the right, we will “only” cycle southwards. This does not mean that we will arrive in South Africa soon! 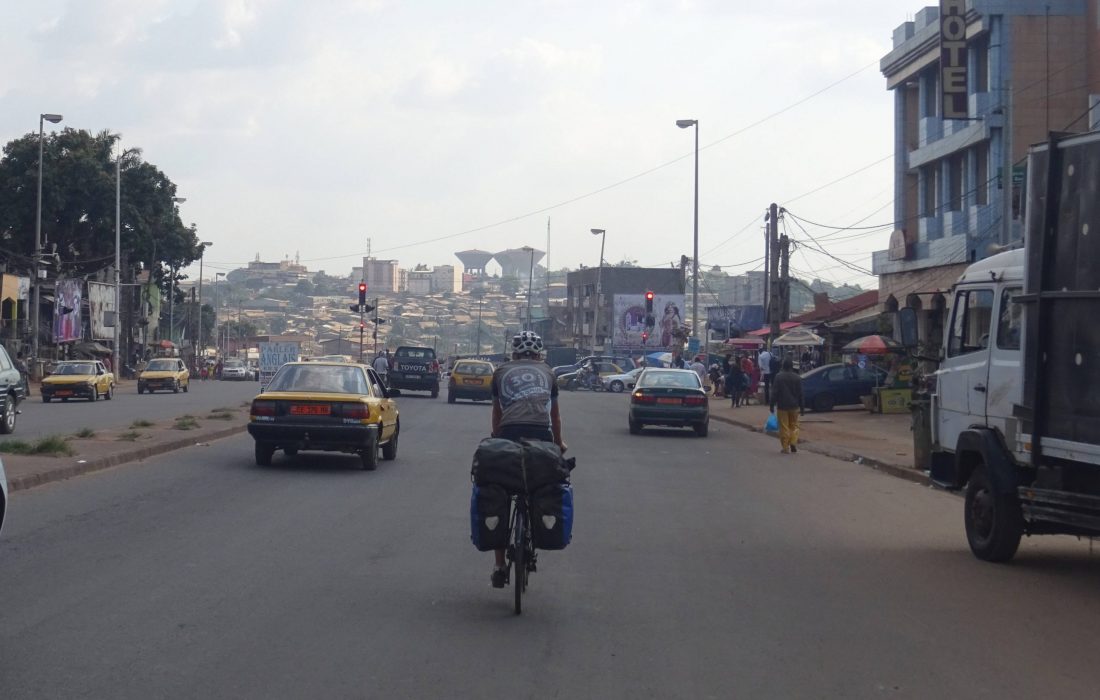 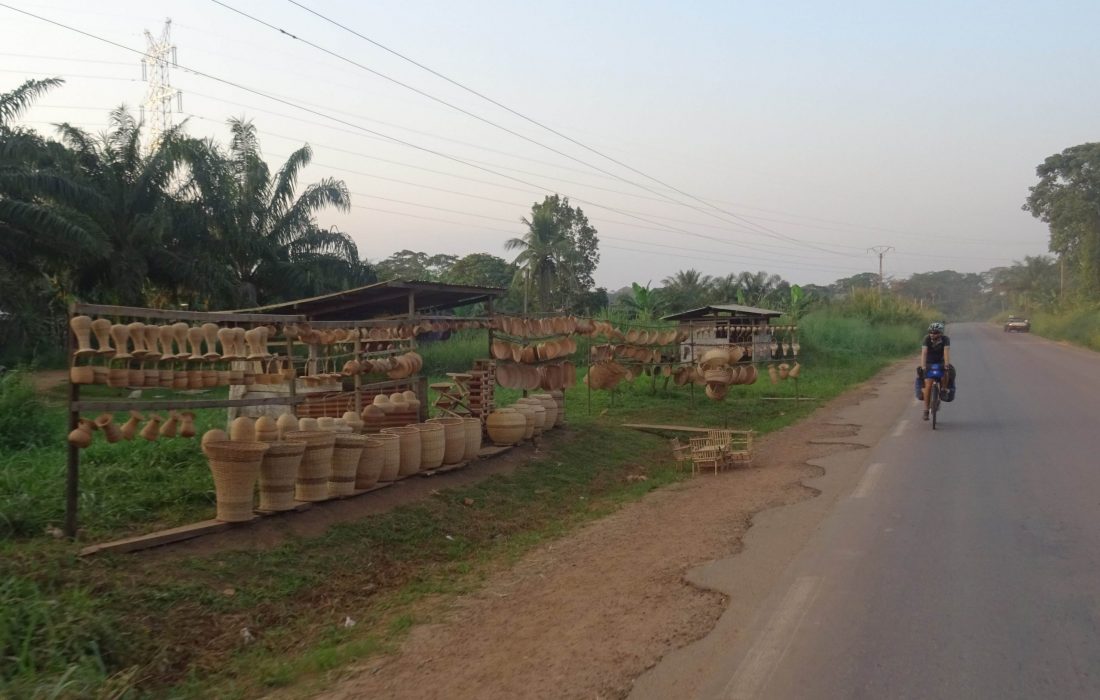 Cameroon has one of the highest alcohol consumptions in Africa. Already the Nigerians drew our attention to that fact and we witnessed the scale every day since we entered Cameroon. Repeatedly, we saw tipsy men walking through the villages before 10 AM. Several times, locals asked us if we want to drink palm wine or beer for breakfast. In all bars and restaurants, sit men and women drinking beer, which was a completely new picture for us.

The Cameroonian breweries outdid each other in the last years with prize games where one could win various things. This situation proceeded to an extreme condition, where the bottle tops, on which the breweries published the prices, circulated as an unofficial currency. Even the police accepted the metal pieces as a bribing currency.

Since we left Yaoundé, we had difficulties to find a spot to pitch our tent. Either one is in the jungle or in a village. 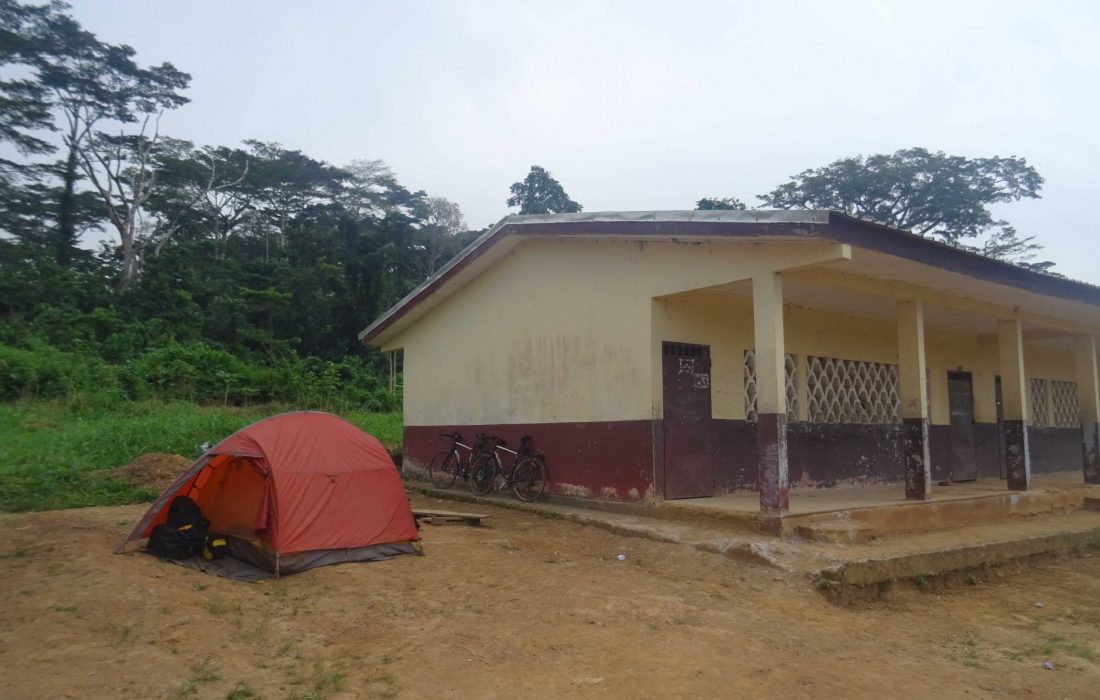 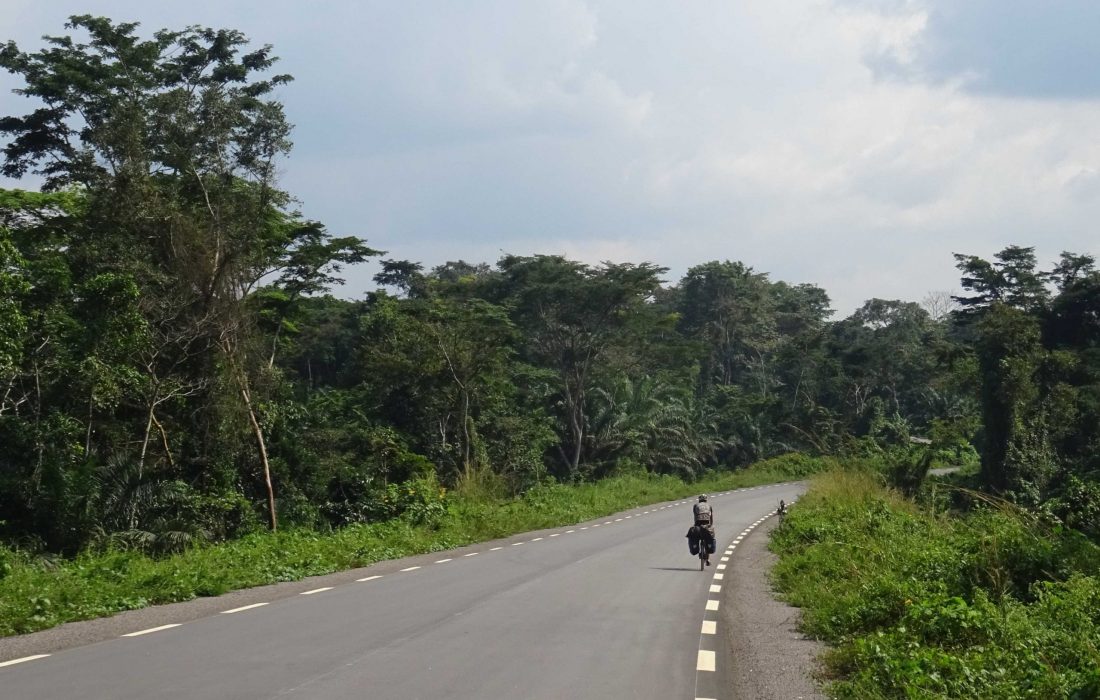 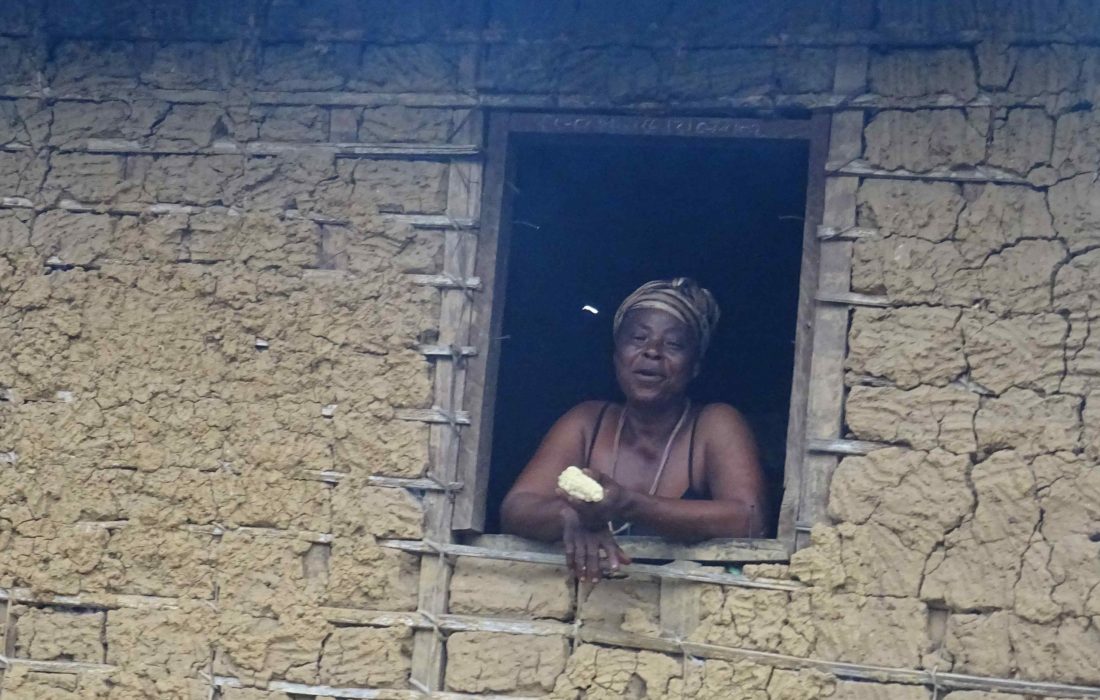 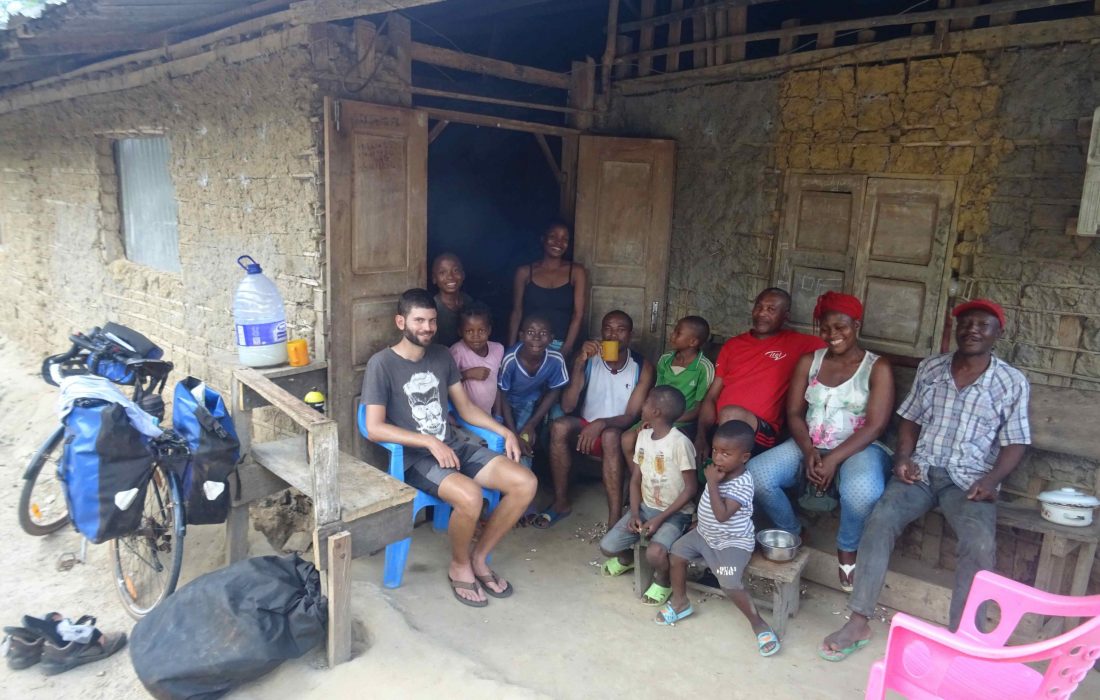 For that reason, we asked some men who were drinking palm wine if we could pitch our tent somewhere, since they greeted us when we passed them. Like many times before, the family offered us a room. The father gave up his room for us and slept in the children’s room instead. The consequence of that was that the kids had to sleep on the sofas in the living room.

In the midmorning, we left the friendly family and their numerous children with a full stomach. For hours, we cycled through forests, which were full of trees that have no branches except the treetop. After some villages without any opportunity to eat something, we asked some people where we could find a cook-shop. One of the man invited us to follow him after a short discussion. There was a wedding only 100 m from the main road. Quickly some women served us a meal and invited us to participate in the wedding.

At the end, we decided to sleep in the village. Unfortunately, we had to change our plans to wild camp, since there was heavy rain several times. The motivation of the guest to dance did not shrink and they partied until late in the night, accompanied with loud music. Our improvised sleeping place was rather sketchy, but enough luxury for one night. We roughly cleaned a smelly shed full of rubbish and we spend a restless night in the leaking hut. 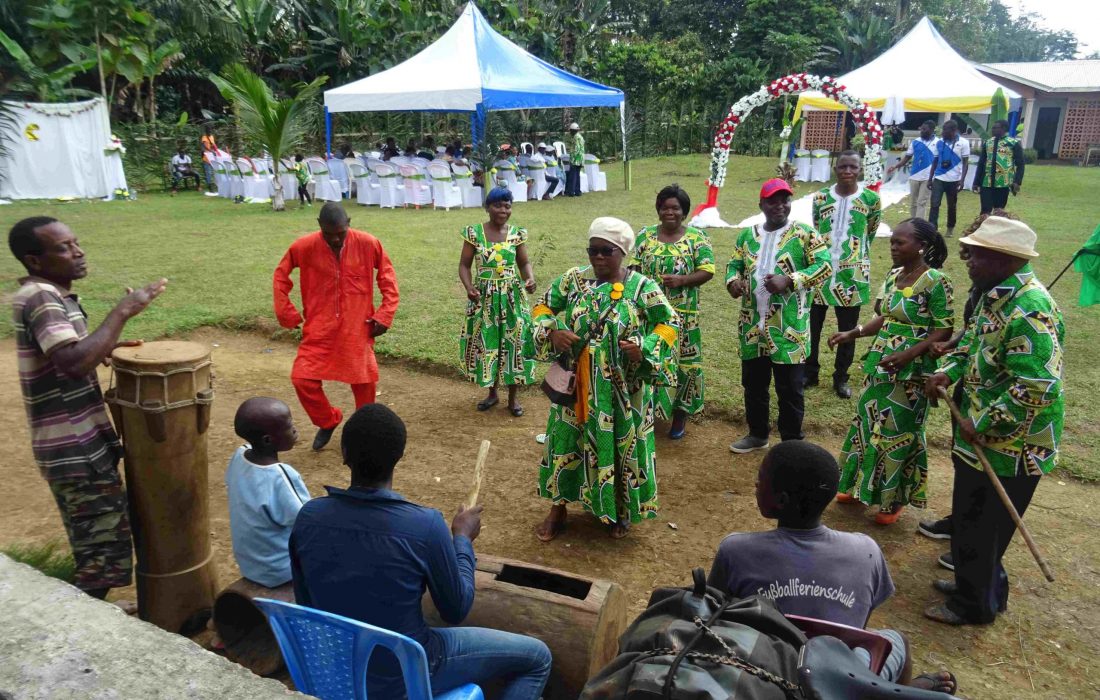 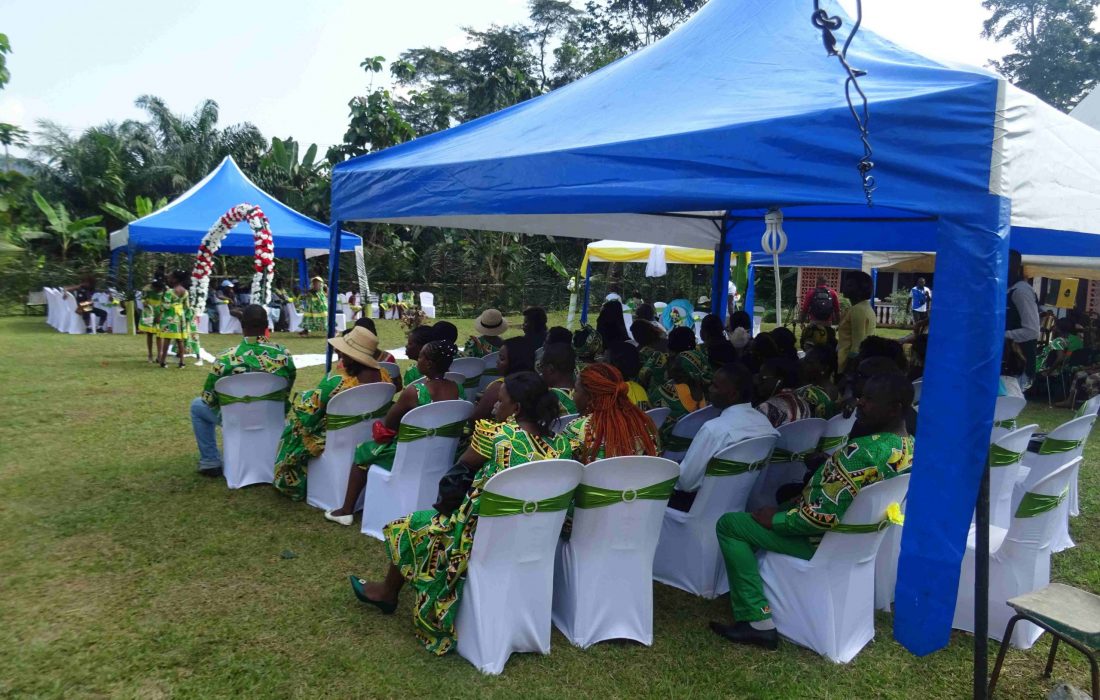 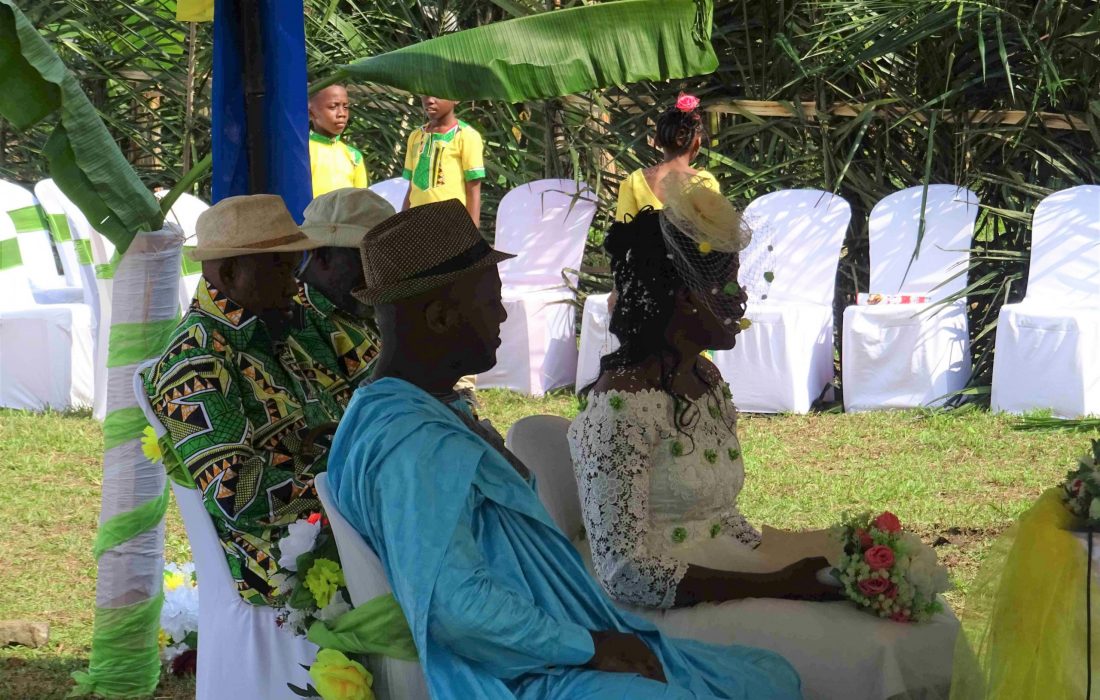 The strong rain during the night reminded us that we approach the equator and therefore there is no more rainy seasons. The bibulous guests were already back in a party mood when we said goodbye in the morning.

Tired and one experience richer, we pedaled along the hilly road. The villages got smaller and the traffic decreased more and more.

We followed a forest trail and found actually a decent place for our tent in the middle of the jungle. A few kids saw us turn into the forest and visited our sleeping place. They were excited to watch us and played some music on their old mobile phone. After around an hour, we told them that we would like to have some quiet time and surprisingly, they politely walked back to their village.

So we thought… After a couple of minutes, the boys returned with three avocados they found somewhere in the forest. They asked if we like corn and we said yes, but we also mentioned that we have enough food with us. An hour later, the boys came back with five corncobs. Repeatedly, we are surprised about the hospitality of the people in Africa. 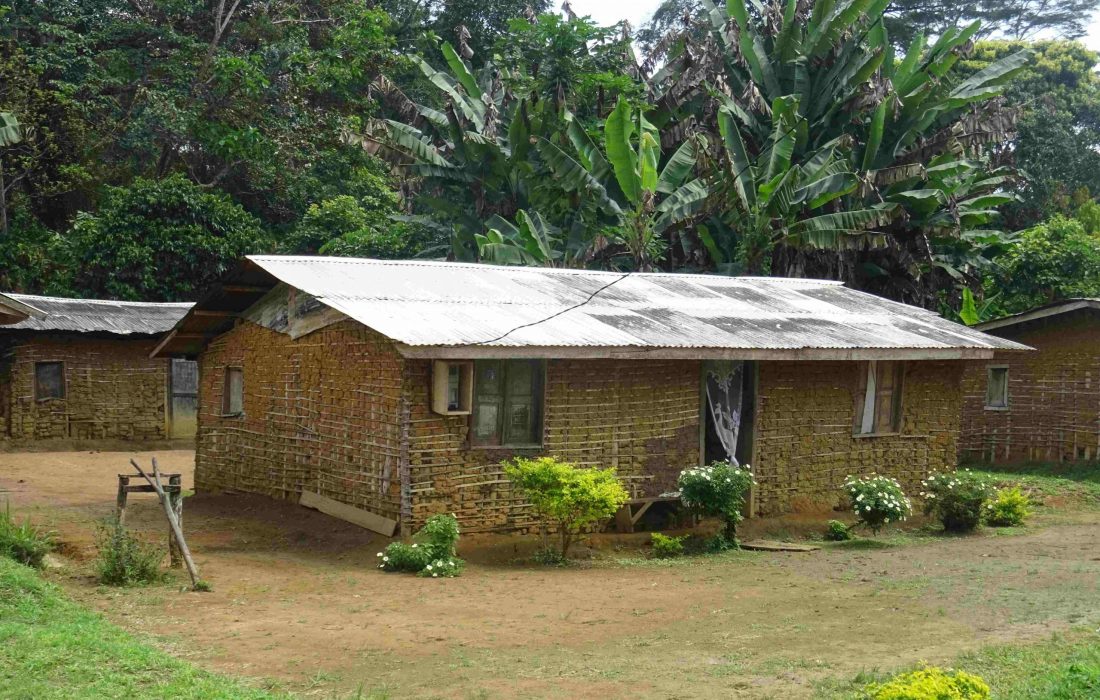 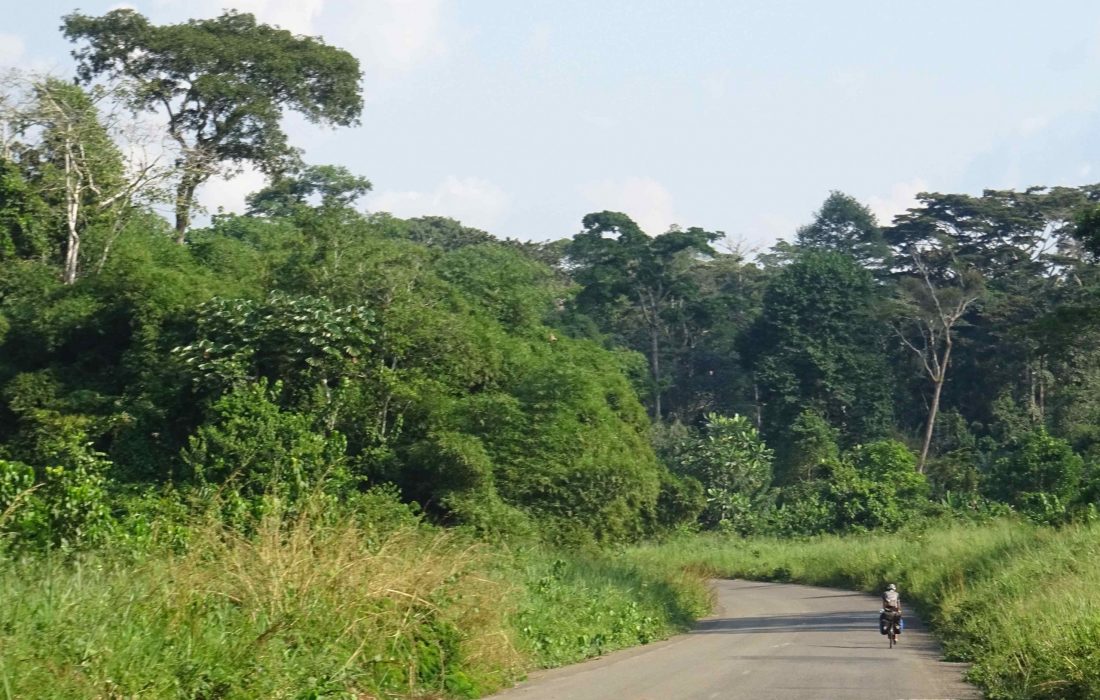 During our time in Cameroon, we never had to show our passports, except when we entered and left the country. This example proofs how different the countries in this region are, since the south west of the country has currently a precarious security situation.

A nice restaurant employee let us grill our corncobs on his fire and we shared the delicious snack with him. When we planned our journey, we intended to visit the small, oil-spoiled country of Equatorial Guinea. The immense visa costs of 300 Euros for one month scared us and we decided to skip the country.

We spent our last night in Cameroon with a friendly family who managed a restaurant directly at the border. 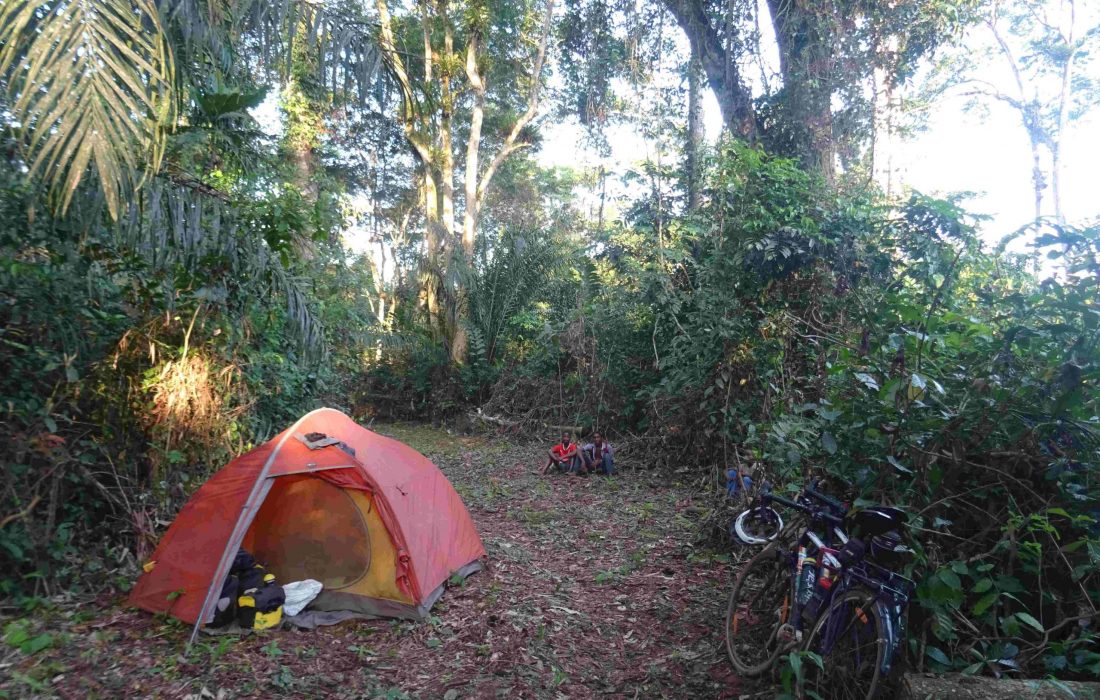 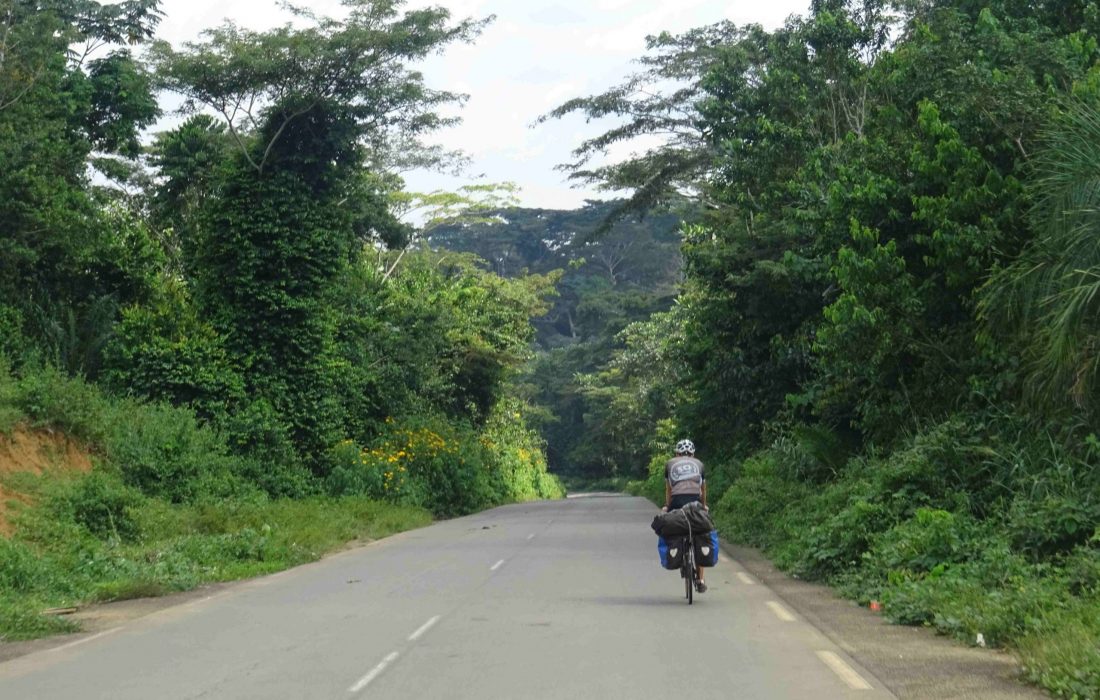