The extremely friendly and interested border officials dismissed us into Ghana and confirmed our image of the warm people of Ivory Coast. After a few kilometers of no-man’s-land, the very professional officials welcomed us on the Ghanaian side. There was even a duty-free shop with cheap spirits, even though we were I the middle of nowhere.

The bad road accompanied us a bit, before we reached an ancient tarred road, equipped with many potholes. In a small village, we tried our first meal in Ghana and were enthusiastic. Finally, something new for our taste buds!

A quick test confirmed Adrian’s concerns regarding a fresh malaria infection in a health facility. In the waiting room, they displayed an American wrestling show and the fusty documents lay unsorted in a dusty rack. Back on the gravel road, a bus full of singing and clapping children overtook us and we felt like being part of a stereotypical African movie made in Hollywood.

During our first night in Ghana, we first heard a mosque and afterwards music with an extreme bass until late at night. In Ivory Coast, we heard drumming or music. Unfortunately, we never saw the action live.

Inga and Kenneth, who currently travel through Ghana as well, told us about Mole National park and that it is possible to see elephants from close proximity for a good price. Therefore, we decided to cycle the long detour. At least we found a shortcut on the map, which proofed to be a good idea quickly.

A couple of years back, there was a well-established national park in this area called Bui. Unfortunately, the government decided to build a huge dam and 40% of the former national park was flooded. The 400-megawatt project at least made the connection to the national grid system possible for many villages.

A friendly woman at the entrance to the dam referred us to the headquarters. A cool young man in a fashionable shirt introduced us to the vice-CEO and drove us to an observations point, from where we could see part of the lake and the dam. Normally, such a tour needs to be booked ahead, but our story gave us once again an advantage. 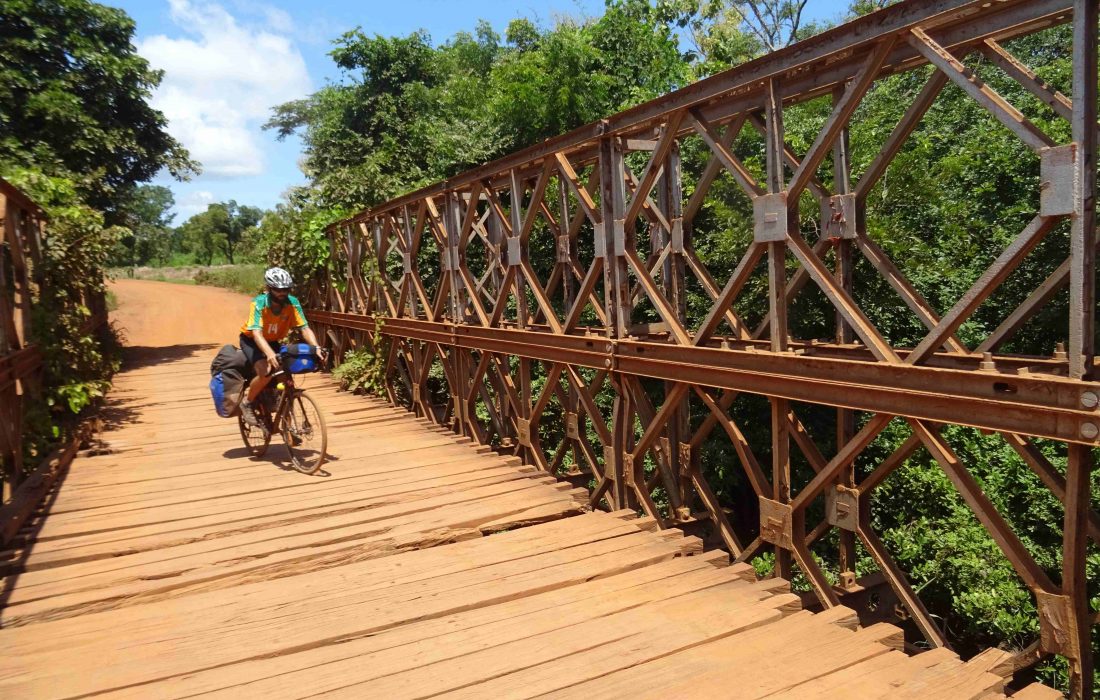 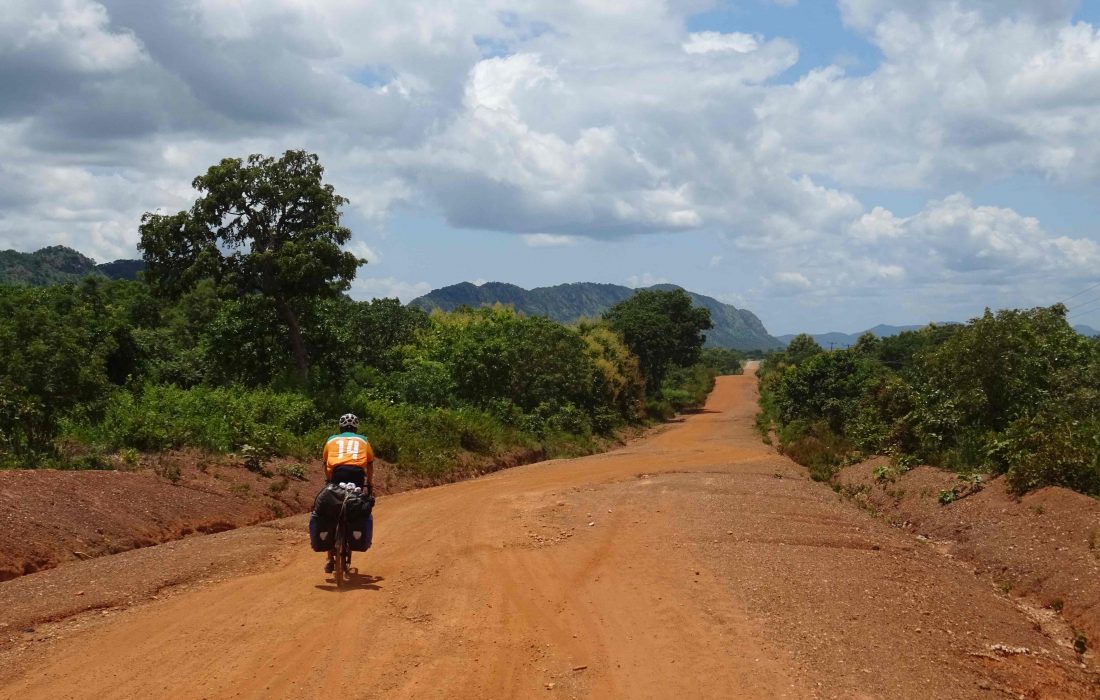 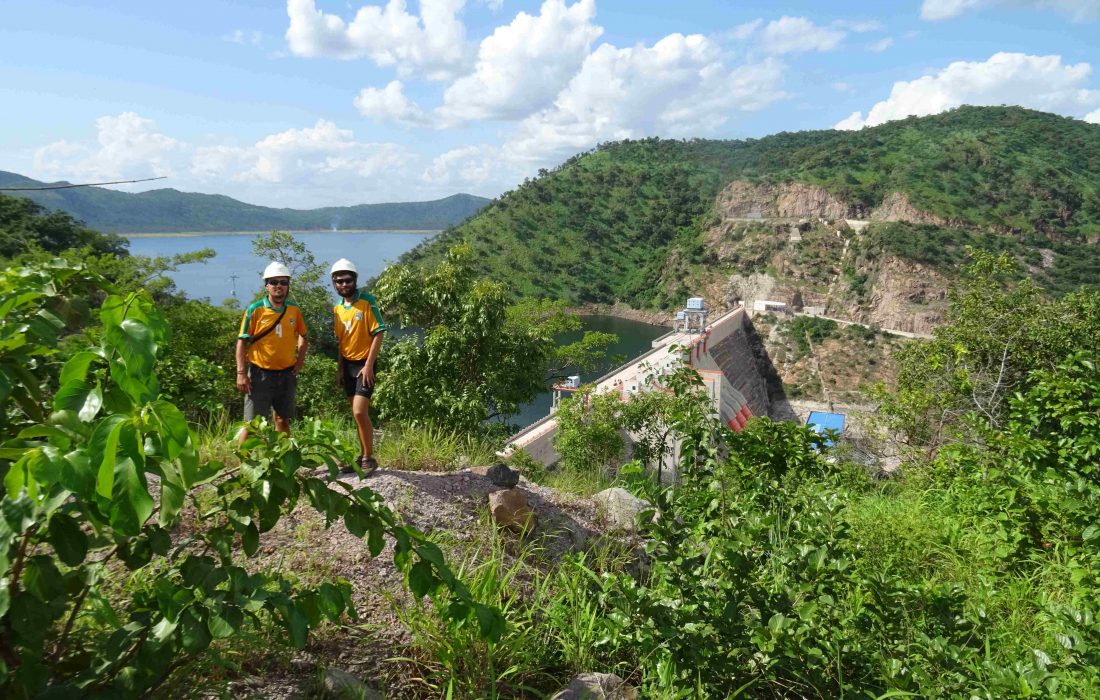 Since we left Abidjan, the landscape changed quickly after we crossed the border. Instead of dense rainforest, the surroundings reminded us of the Gambia, just much greener because of the rainy season. Occasionally, we saw huge trees, but bushes and termite hills definitely dominate the landscape. This change is not surprising, since we already cycled more than 500 km north from the coast (see map).

In a small village called Maluwe, the locals allowed us to visit an ancient mosque in the west Sudanese style. The mosque is several hundred years old and only consists of clay, wood poles and sticks. Luckily, there is a microphone at the ground level, so the old muezzin does not have to climb the narrow, dangerous steps to the roof. 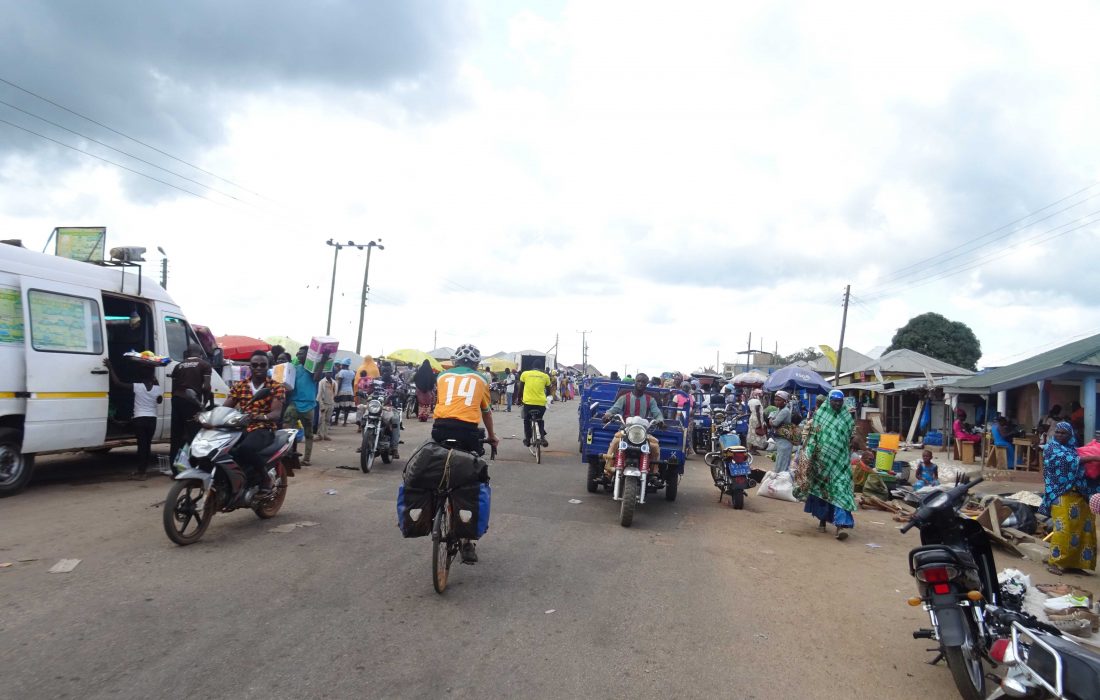 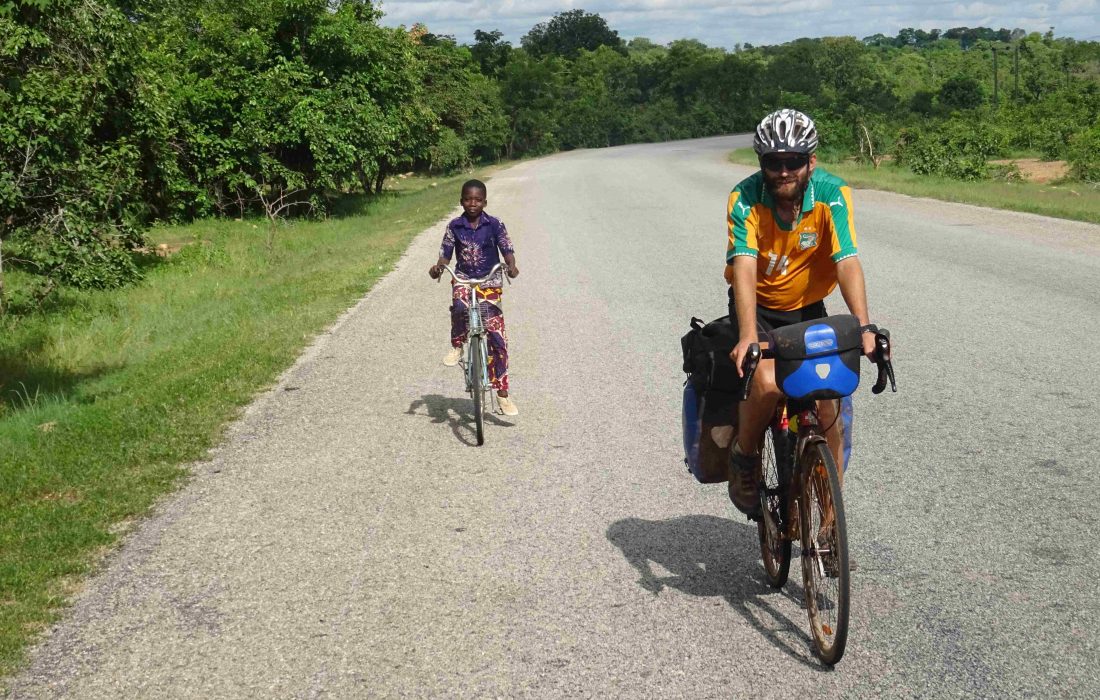 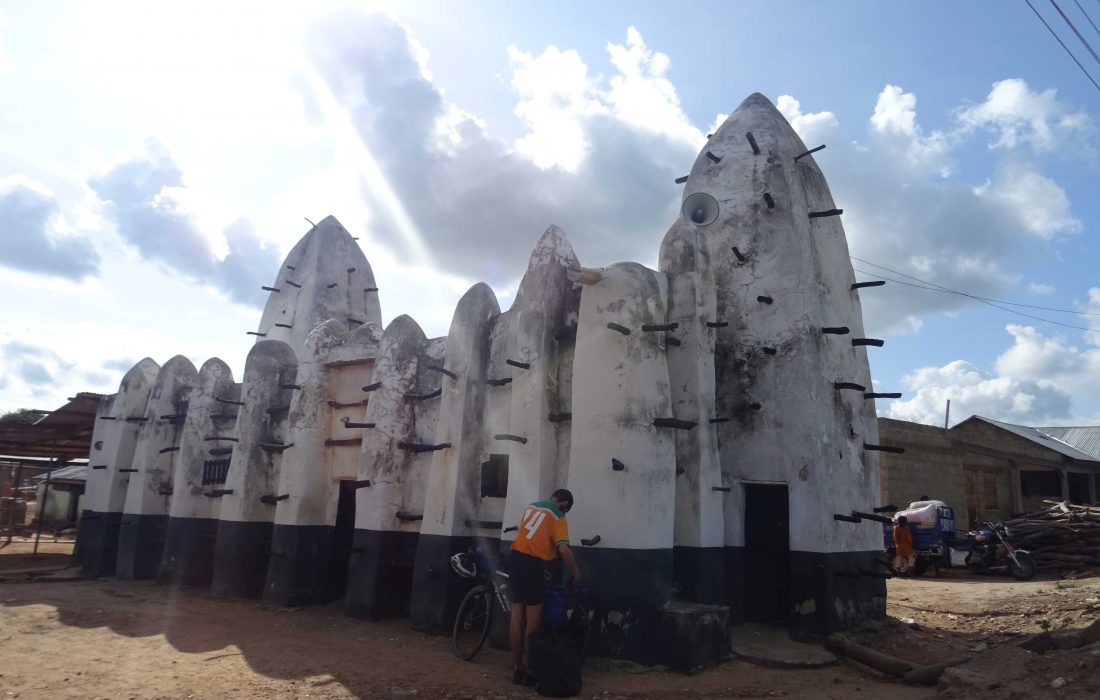 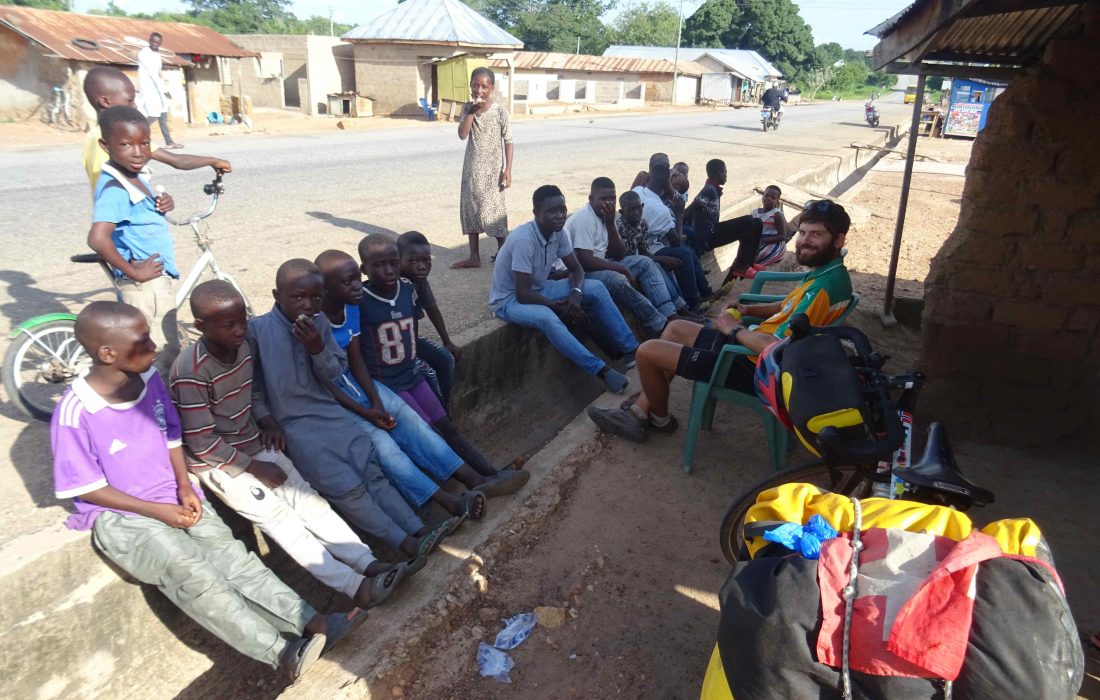 Lately, we slept almost every night in our tent and enjoyed the calmness and freedom of nature. Because of the glaring full moon, we did not even need a torch in the night when going to the toilet. Such a scenery is hard to replace, for that reason outdoorsmen call the tent a hotel equipped with millions of stars.

Adrian caught additionally to his malaria infection a cold, since his immune system was already weak. Therefore, we decided to do a rest day. In a larger town, we asked around if someone could host us, since we did not want to sleep in a hotel. A family, which migrated from Niger, showed us a room without hesitations and gave us the key without asking any questions. 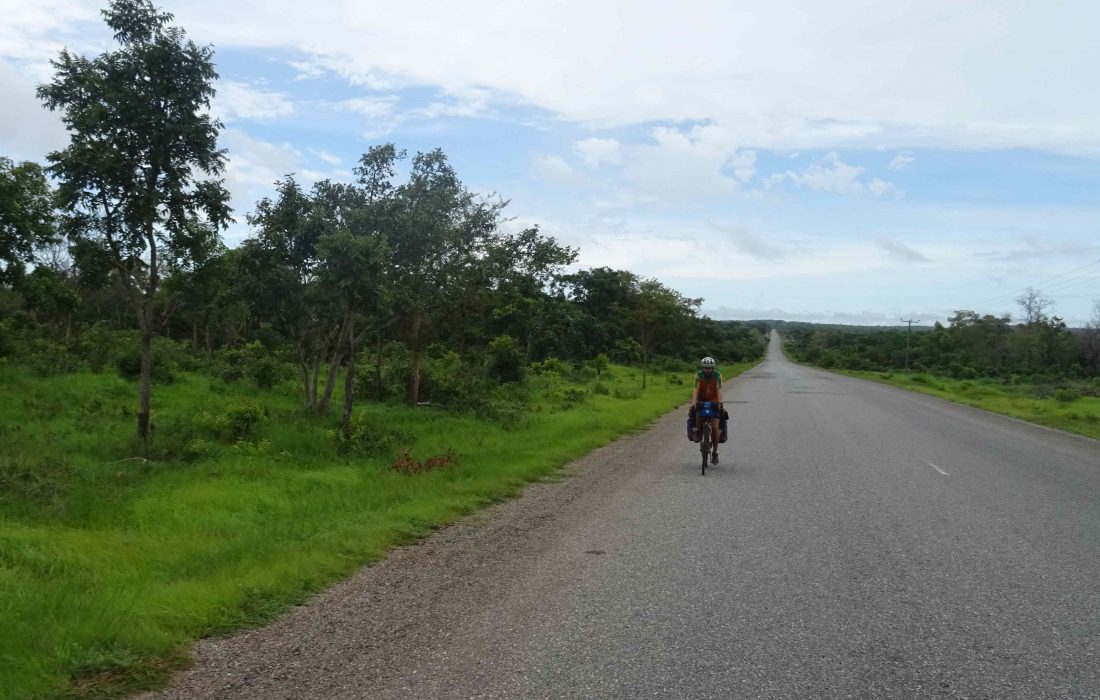 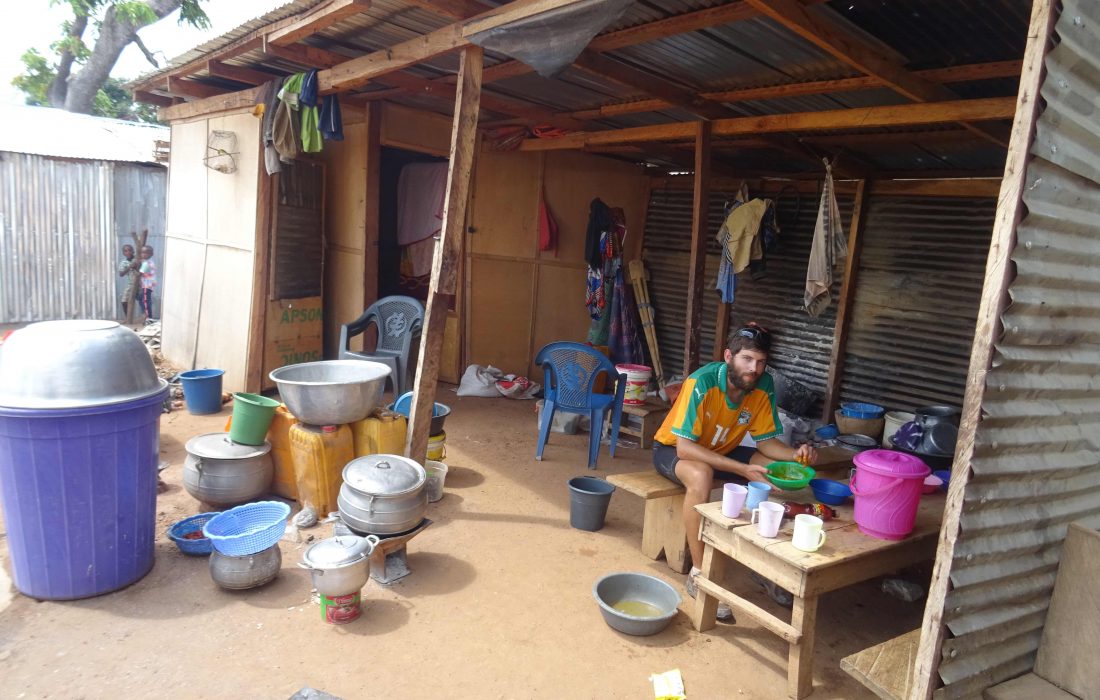 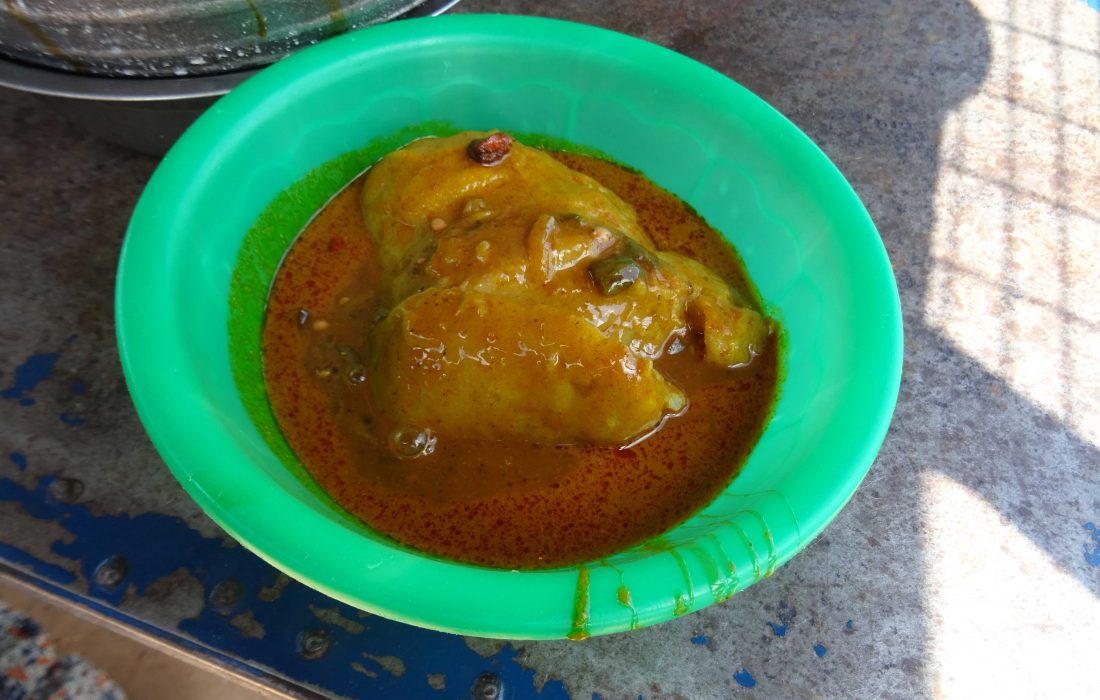 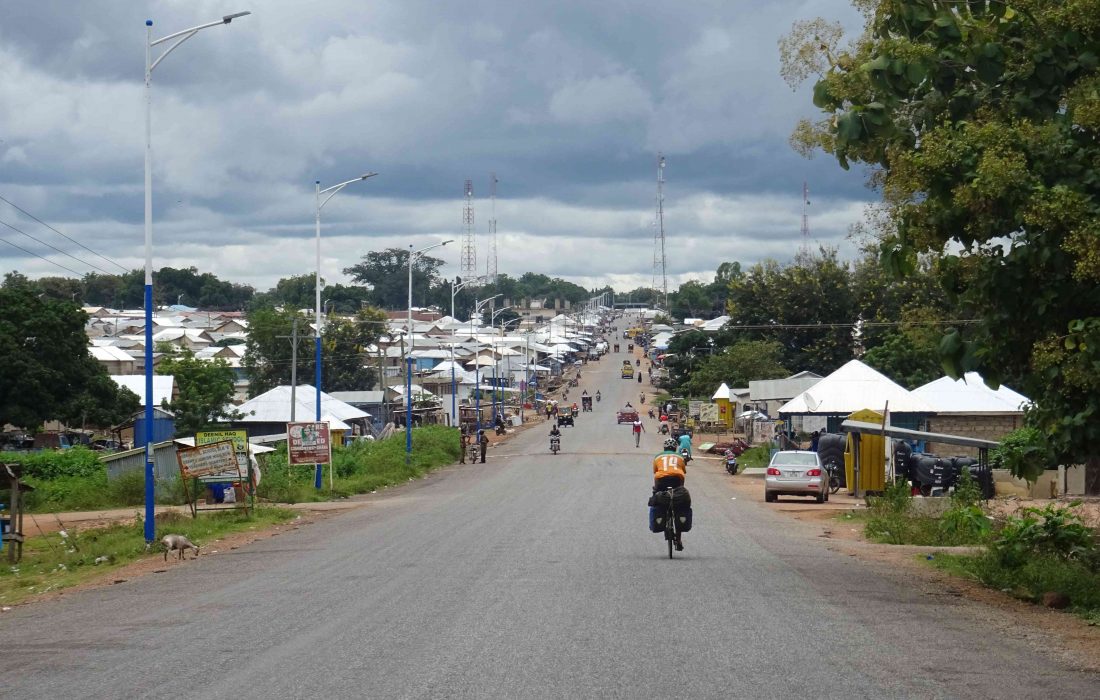 Next to the road, we ate several local dishes prepared by strong women and had some nice conversations with them. A smart teenager explained us the production of Kenkey, a local maize dish systematically. First, separate the grains of maize from the corncobs by storing in water for 2-3 days. This initiates the separation of the husk from the grains. Next is the fermentation of the grains, which takes one day. After milling the fermented grains, one has to add salt and water to the milled powder and cook it like that for around 30 minutes. Finally, form a ball by hand and surround it with the maize leaves, cook it for 2-3 hours on the open fire and then it is ready to eat with a separately prepared sauce.

In Africa, all guests of a street restaurant drink from the same cup and fil it in a huge water bucket by an elegant hand movement. The restaurant owners wash the cups at the most every evening. Washing the plates and the cutlery with cold water and a bit of soap for the next customer is already a luxury in some places.

Unfortunately, despite English being the national language, the communication is difficult, since many older people hardly speak any English. Even if they know a little English, they do not understand us, since we do not speak the Ghanaian slang. Amusingly, several people accused us of not speaking British English and therefore a “broken” English and that was the reason why they do not understand us. The reality is probably the other way around, but difficult to explain under the mentioned circumstances. Additionally, in the north of Ghana live many people from Niger, Mali and especially Burkina Faso and speak French. 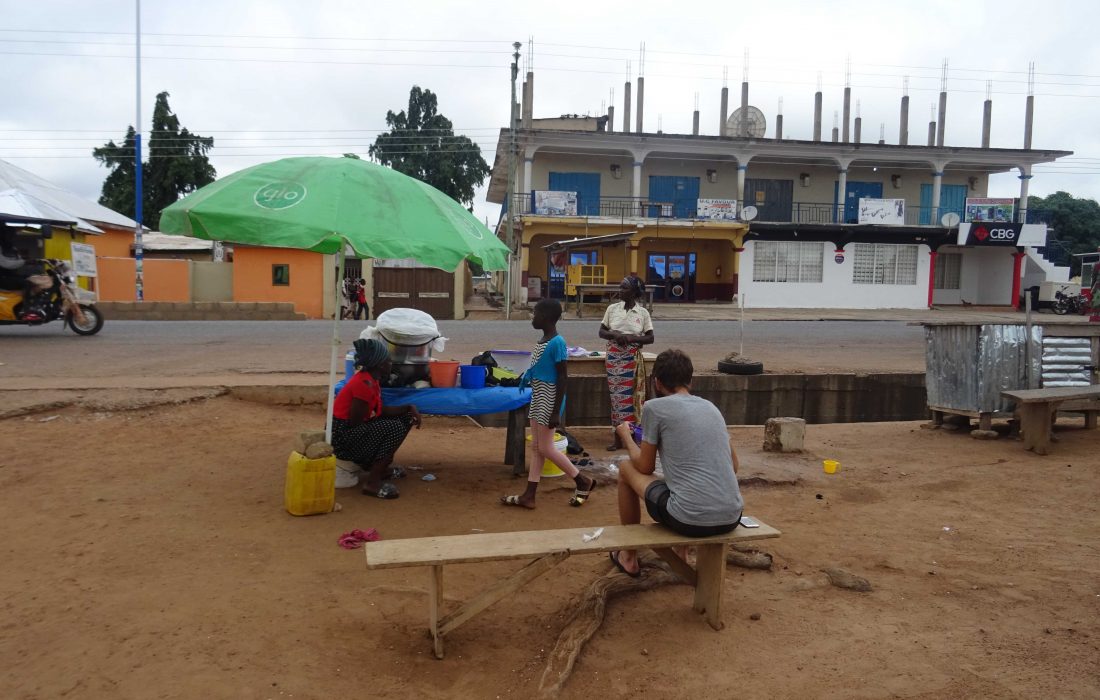 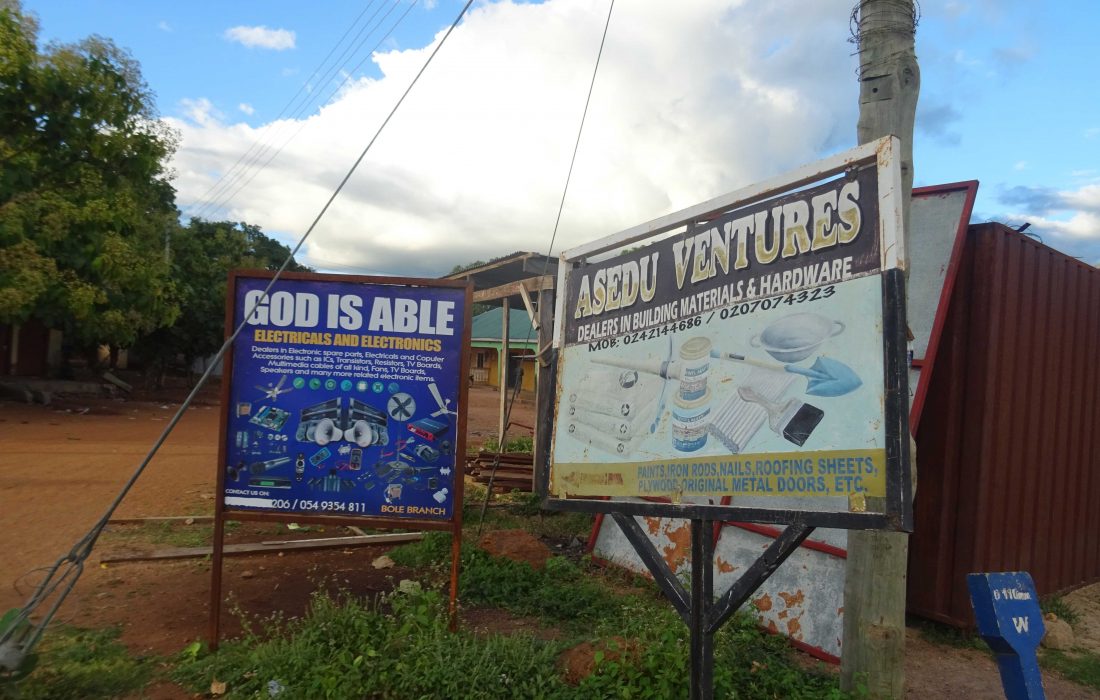 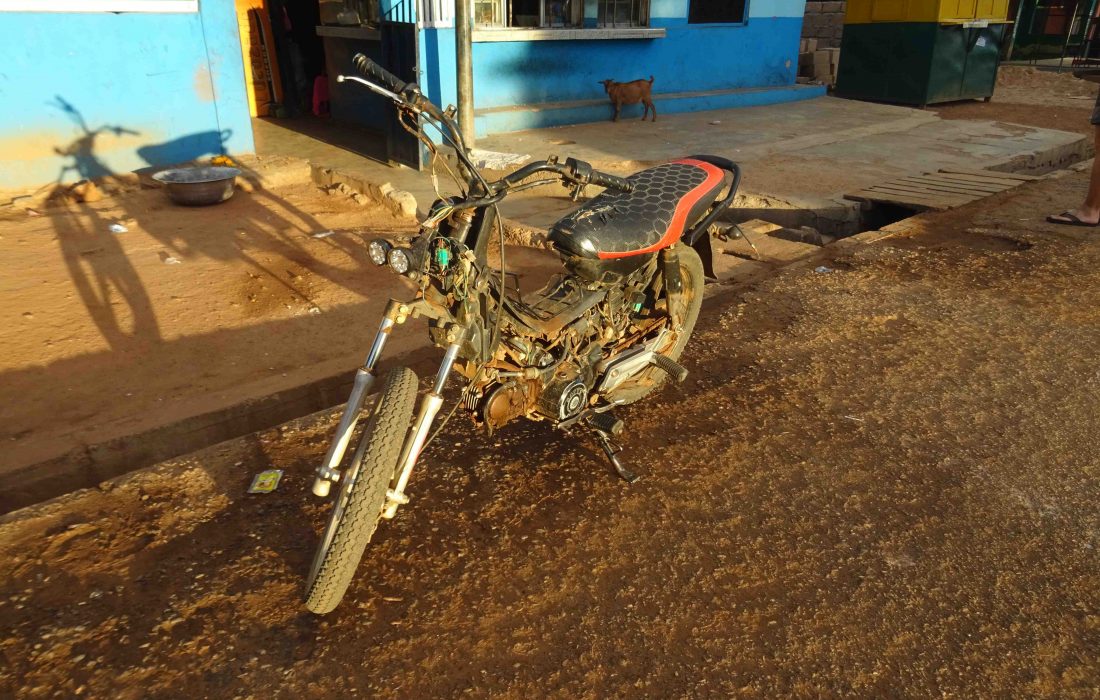 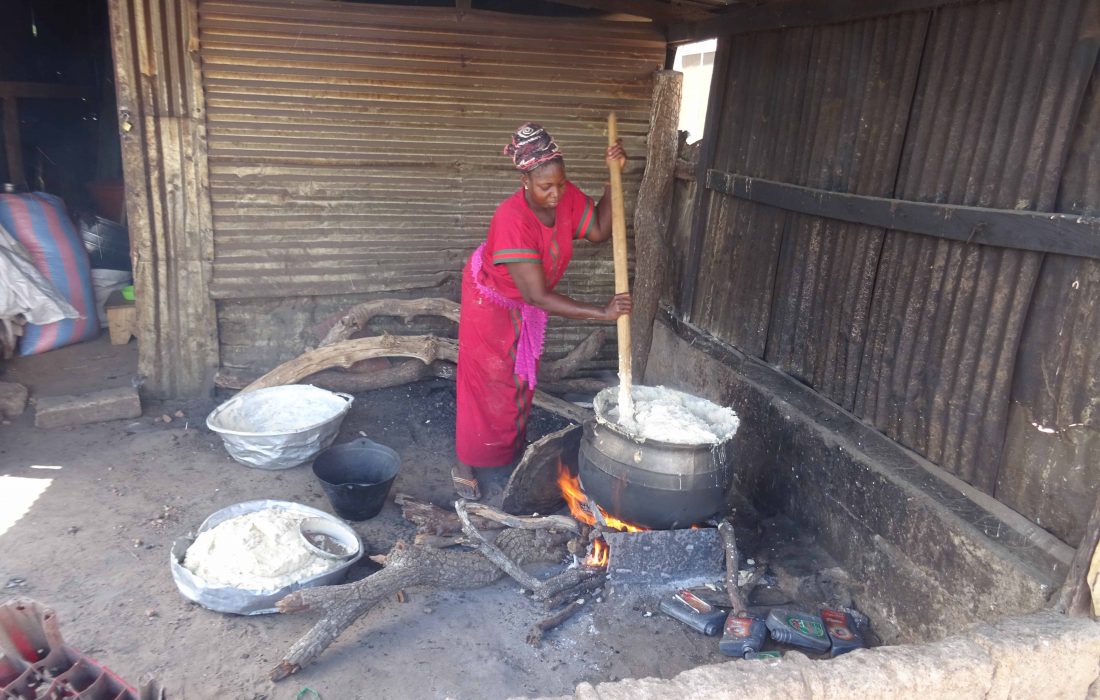 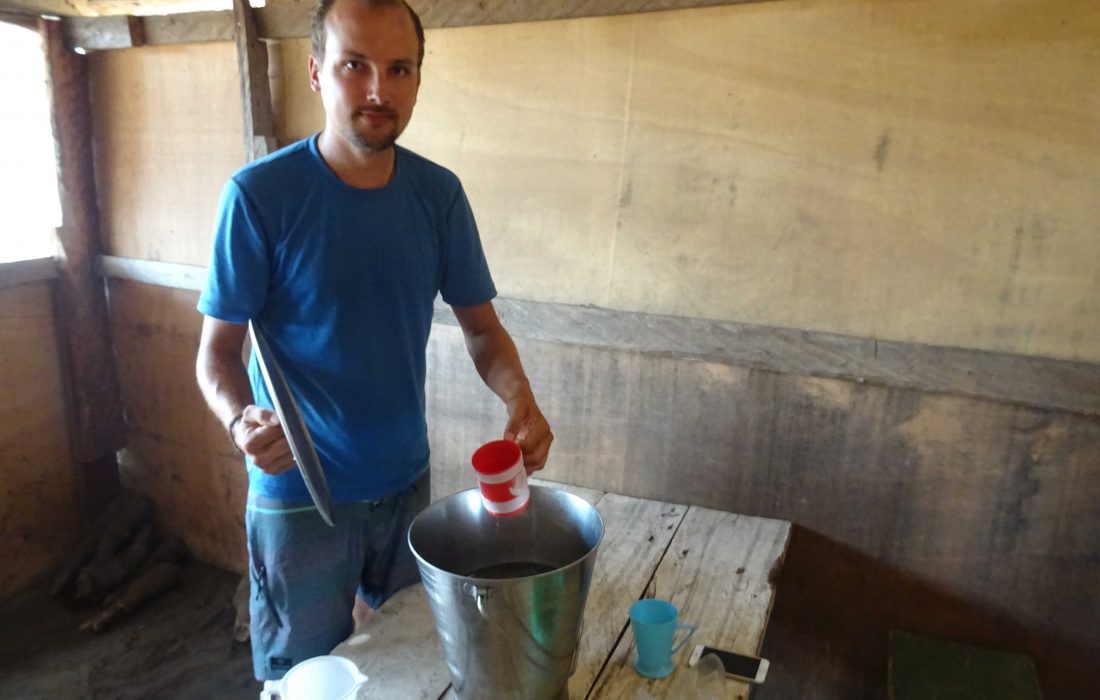 Adrian’s fever and cold proved to be persistent and therefore we rested a bit longer in Bole than anticipated. When we wanted start cycling, Fabian realized that he had a puncture on his rear wheel. He fixed it on the spot with more than 20 kids watching every move he did. On rough tarmac, we cycled until a junction where one road leads to further to Burkina Faso and the other one eastwards. We turned east and quickly reached the corridor between the Mole national park and a forest reserve. Soon, we spotted the first monkeys deep in the forest. In a small village, we found dinner and breakfast, both for take-away. The corresponding sauce had to be prepared first and a mother delegated her daughter to do the work, as it is usual in Africa. 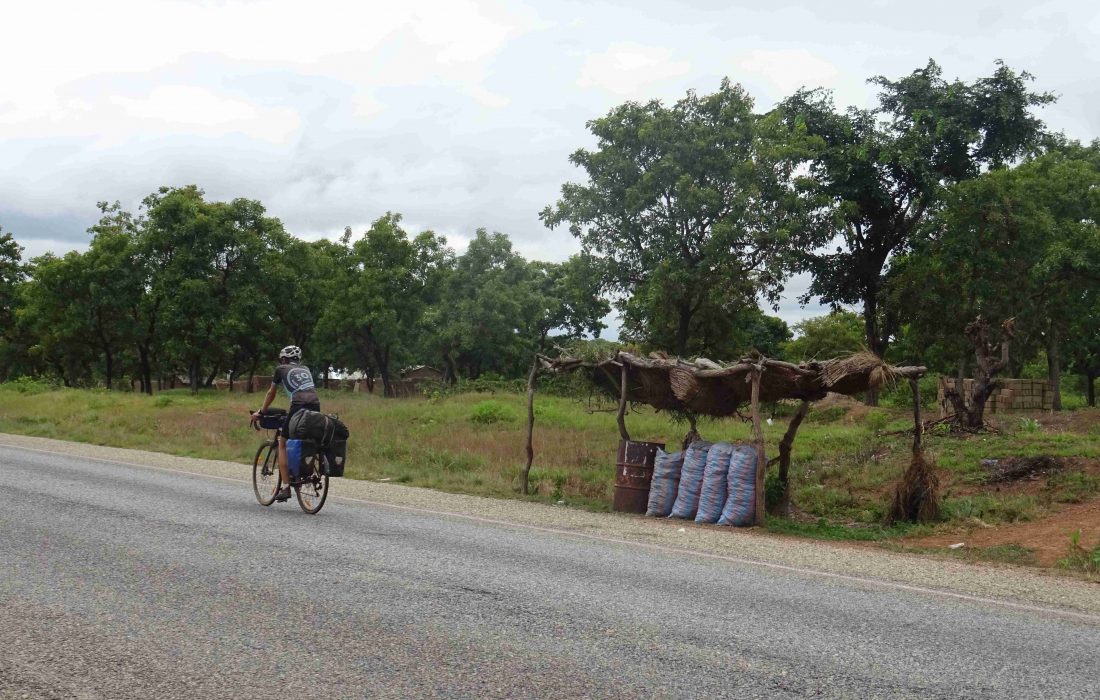 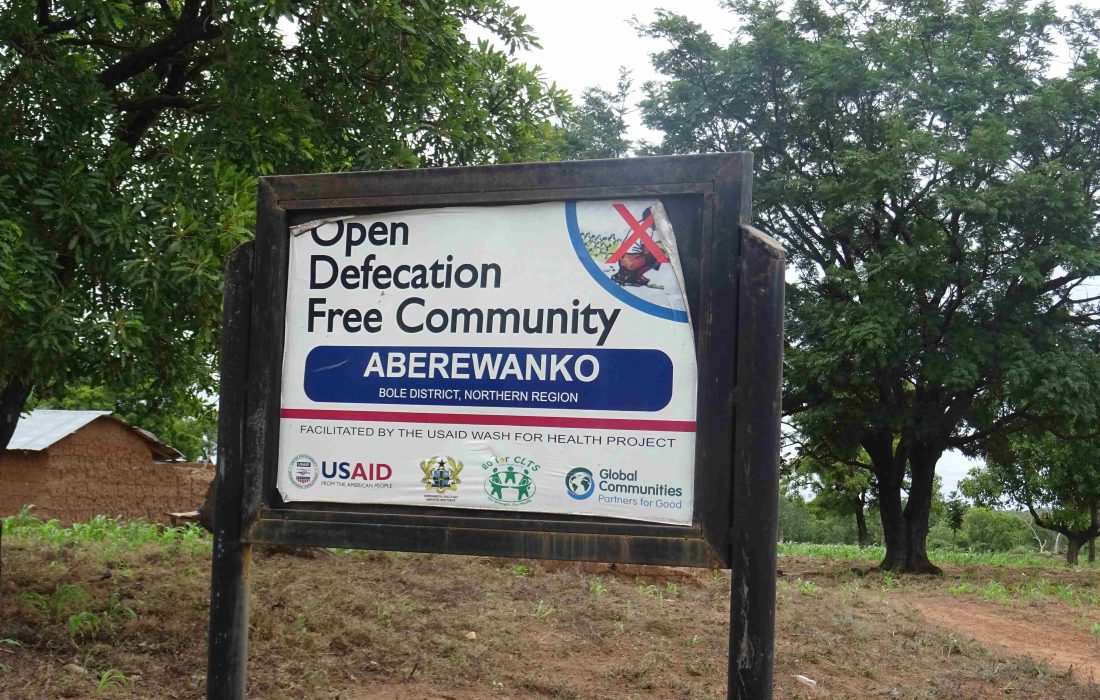 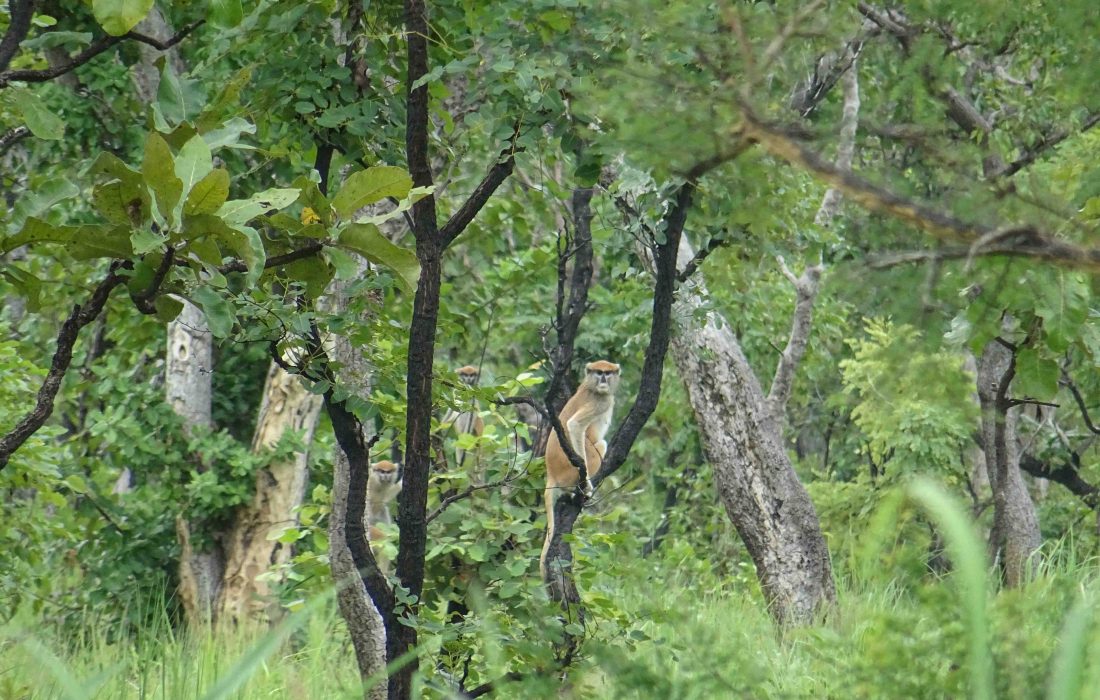 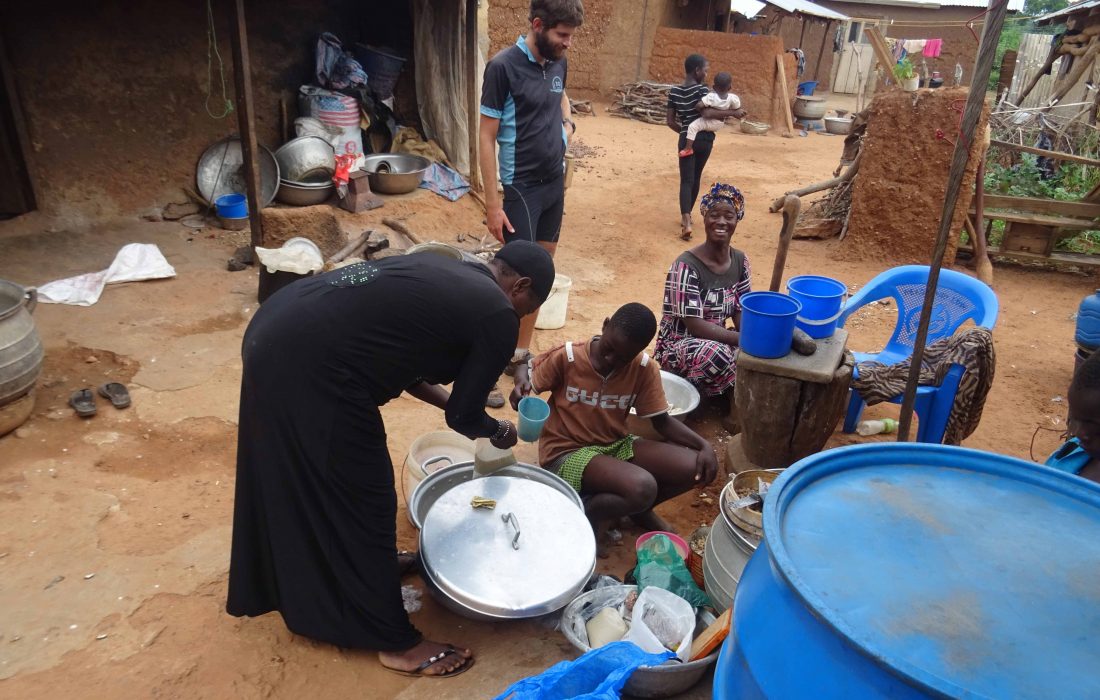 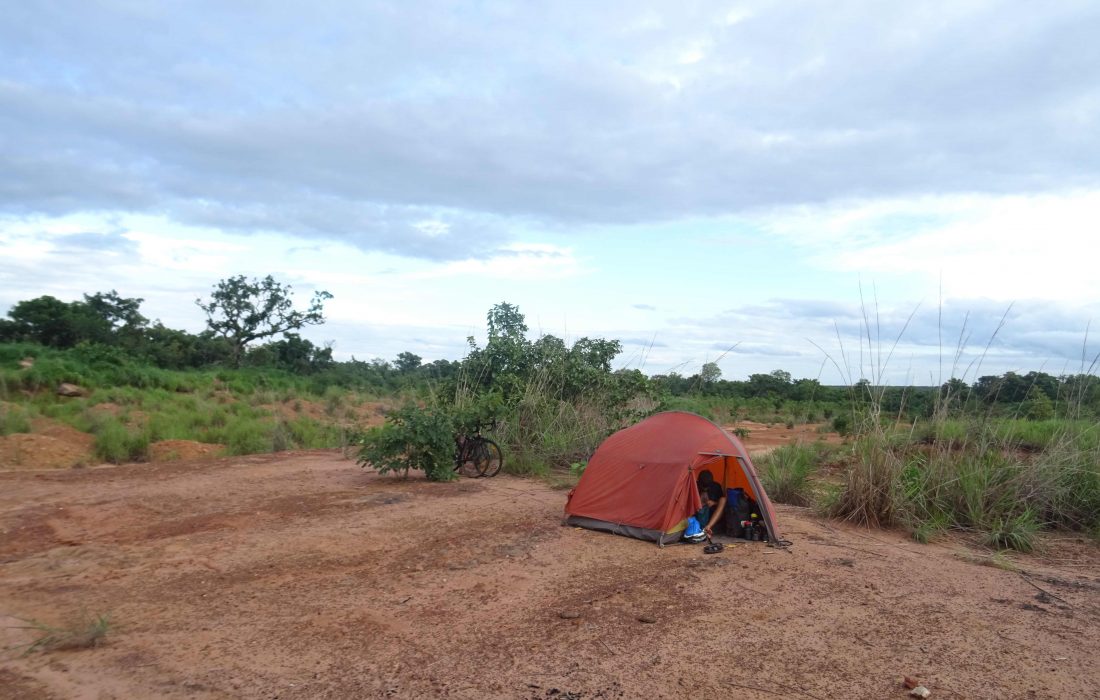 In Larabanga, the last village before the entrance to Mole National Park, we bought provisions, since one has to pay up to 50 times more for the same dish inside the park. We paid the low entrance fee and cycled directly to the viewing area, from where visitors have an overview over a waterhole.

We were not disappointed! We hardly started to look for animals, when we saw a group of elephants who filled their mouths with lots of leaves from the verdurous trees. We were happy that the long detour was worth it and we enthusiastically observed the animals for a while.

In the afternoon, we joined a Safari led by a local park ranger equipped with an old firearm. On the two-hour tour on foot through the bush, we saw an elephant, many antelopes, waterbuck, baboons and other kinds of monkeys. Apparently, there is no other place in the World, where visitors can approach an elephant like that. It felt quite special that only Europeans surrounded us for the time in the park. Finally, we saw our first animal of the “Big Five”! 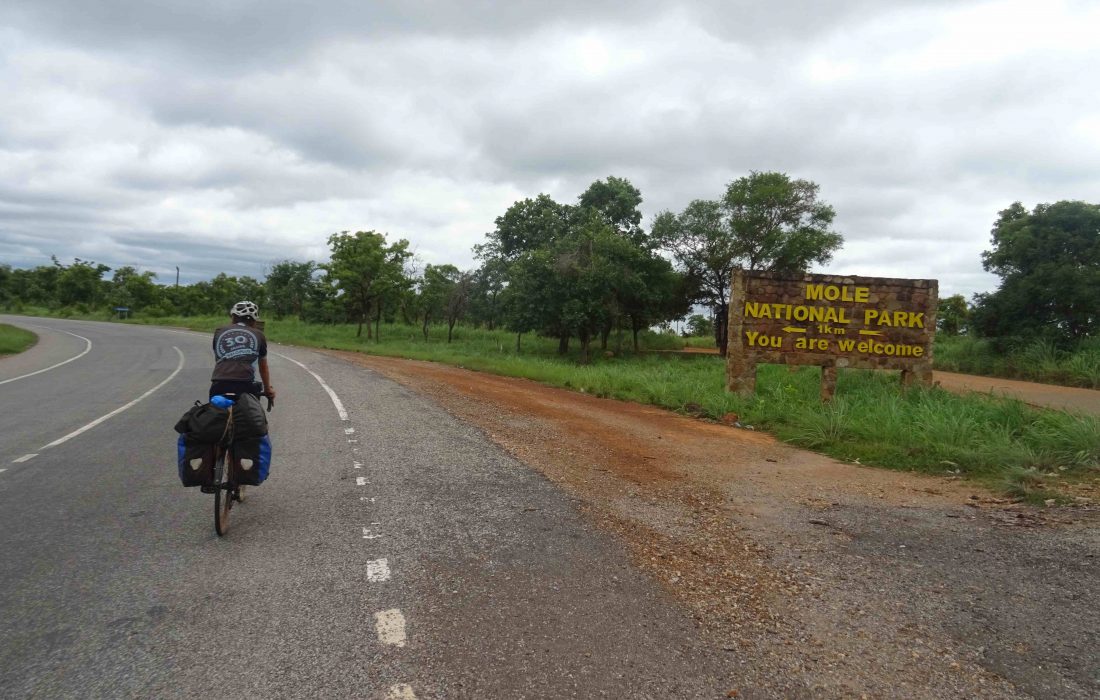 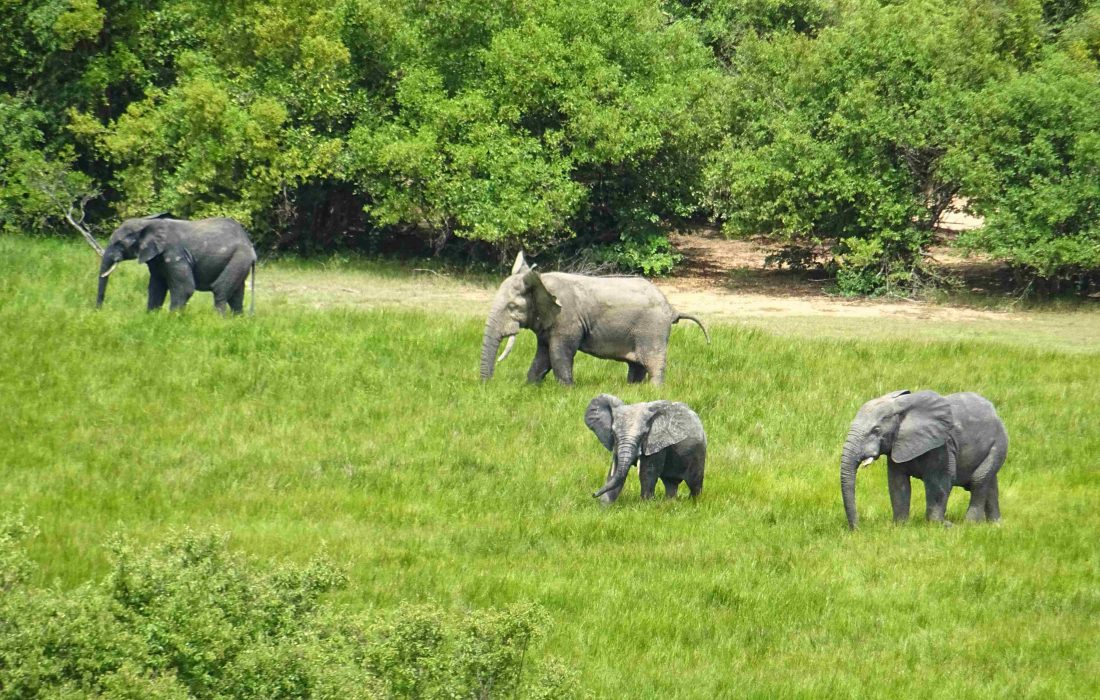 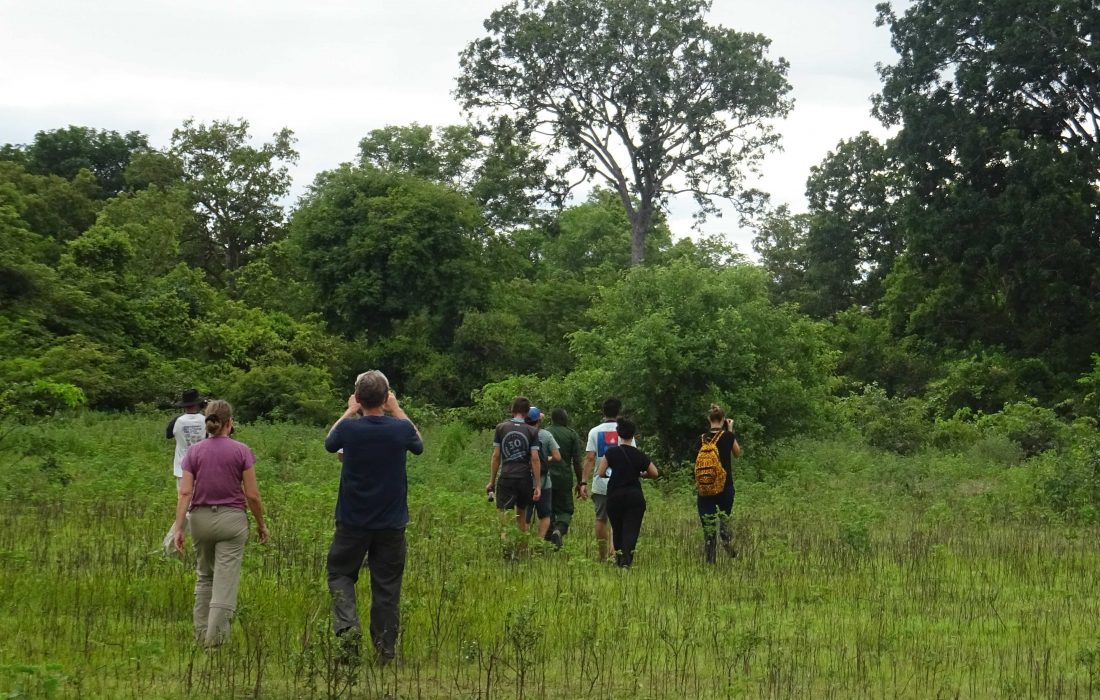 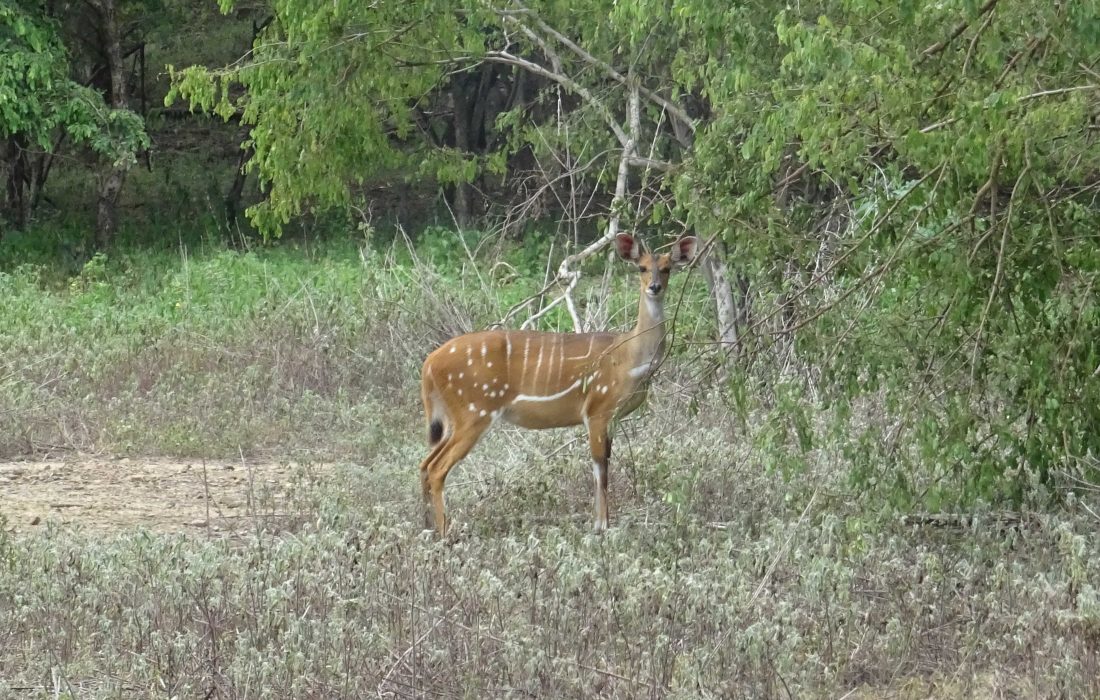 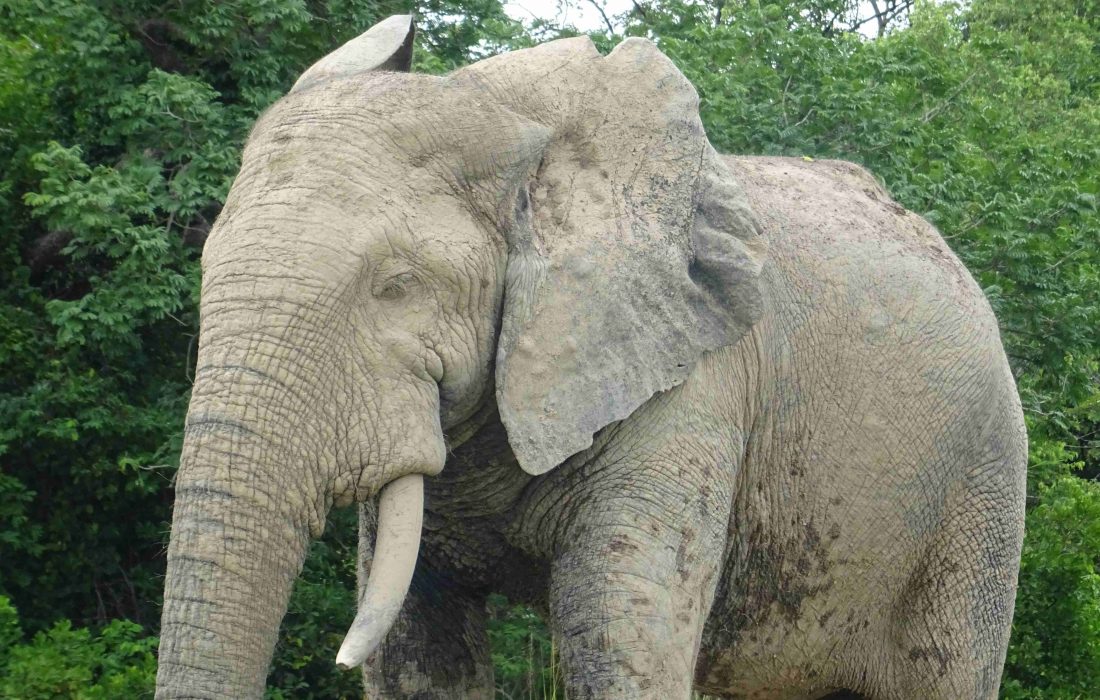 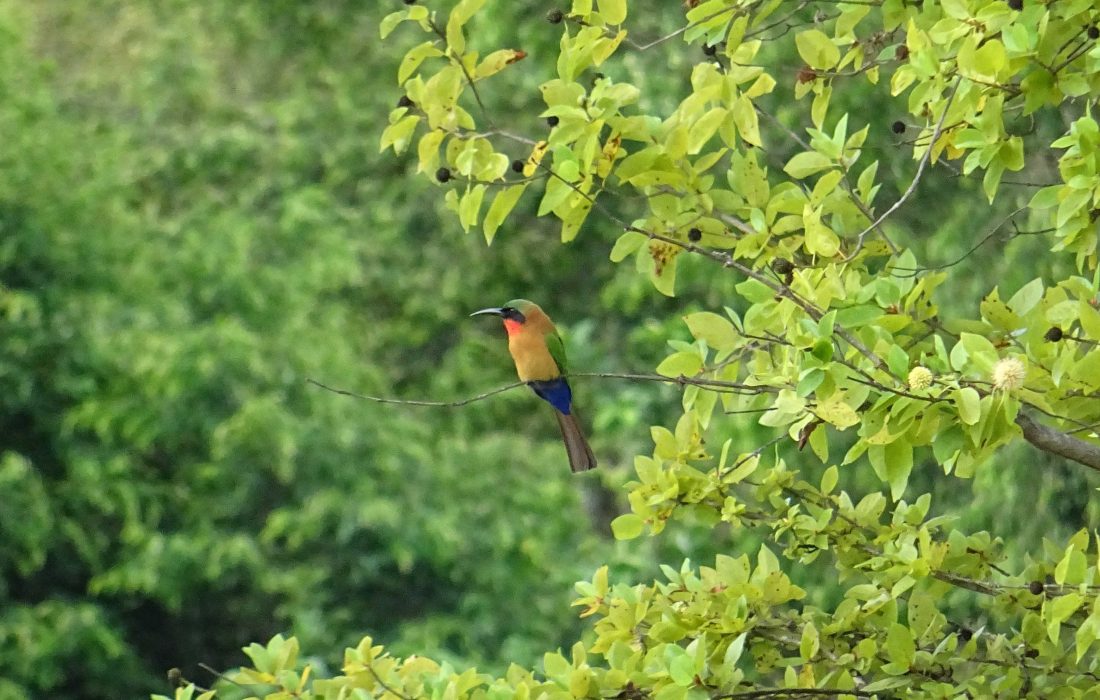 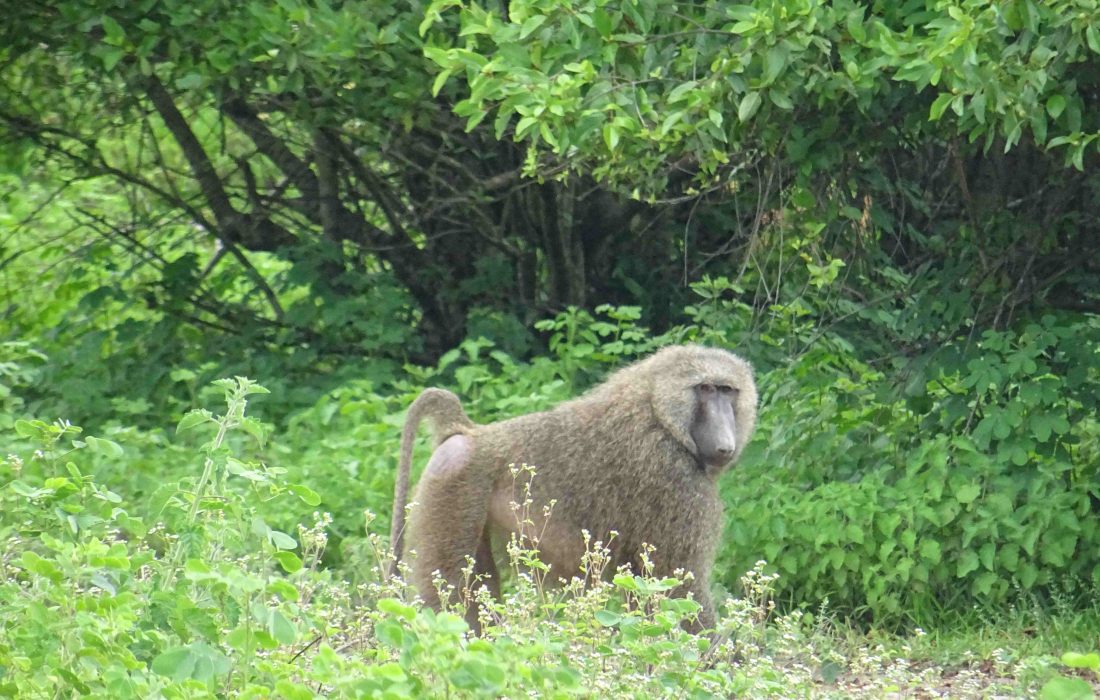 The strong tailwind and the terrain let us cycle more than 80 kilometers before lunch for the first time since a long time. At a junction, we turned southwards and started the long journey until Kumasi, the second largest city of Ghana.

After the diversion, the landscape got extremely flat and the road was dead straight and was quite boring. In a small village, we asked if they have something to eat for us and after a short amount of time, we received a pot full of rice as a present.