The crossing of the Black Volta, a tributary for the 8500 km2 large Volta reservoir was rather unspectacular and after the bridge followed a dead straight road again. The construction of the Volta-dam started in 1961. It is the third largest reservoir in the World, produced plenty of electricity in the beginning and even export to the neighboring countries was possible. Because of the extreme population growth and hence the increased demand for electricity, the energy production is too low nowadays and there are more and more blackouts.

The region is gradually more densely populated and the distances between villages is smaller and smaller. On the side of the road, there were kids selling huge pieces of yam in small stalls. Dozens of those shelter-like shops came one after another and sold exactly the same thing. 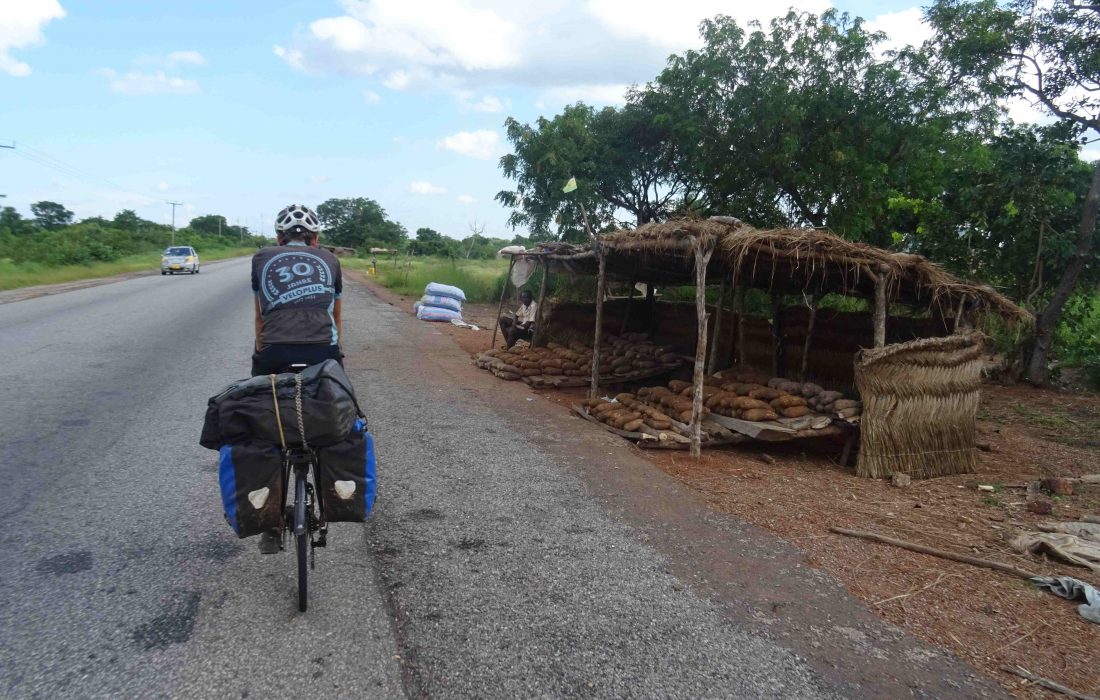 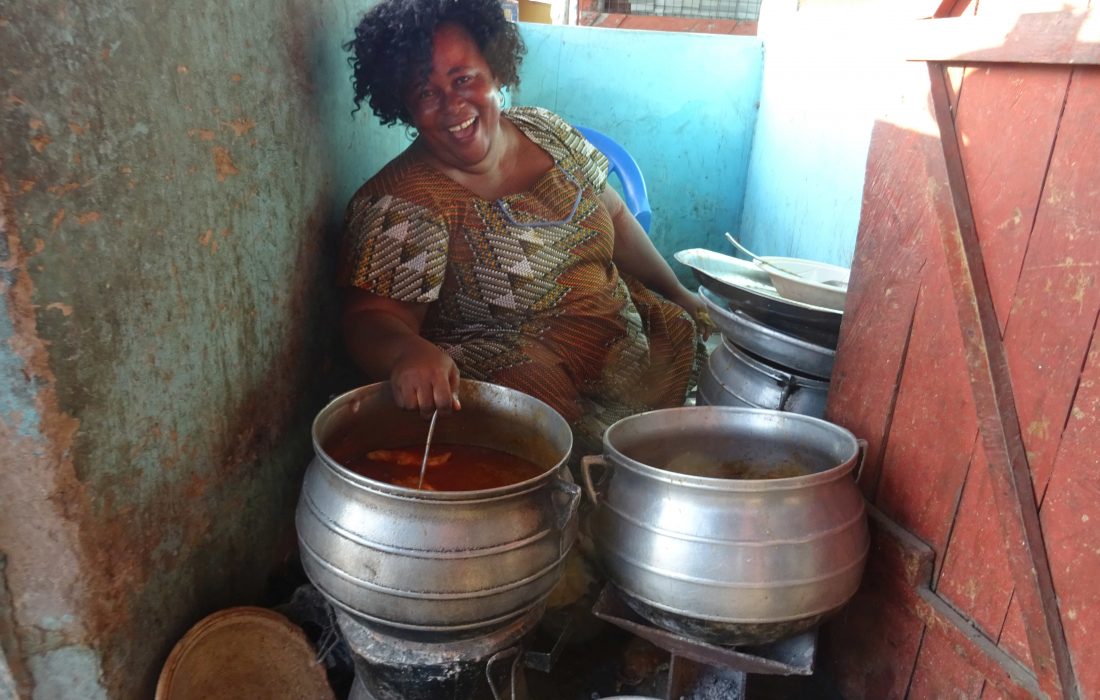 Finally, the relief changed again and soon we already complained about the long ascents. Especially with the present headwind, the hills extended for quite some time. While repairing a puncture, we charged our laptop and dried the extremely wet tent. In the night before, there was continuous rain and therefore, we had to pack the tent completely wet in the morning.

When we wanted to continue, a woman who was cooking next to us for the last hour said we should at least wait until she can offer us some food. Of course, we could not refuse this offer. After the delicious meal, it started to rain heavily and her husband said we should sleep in their house. He did not like it anyway that we planned to camp in the bush, since it was too dangerous. An interesting view that all Africans share so far. 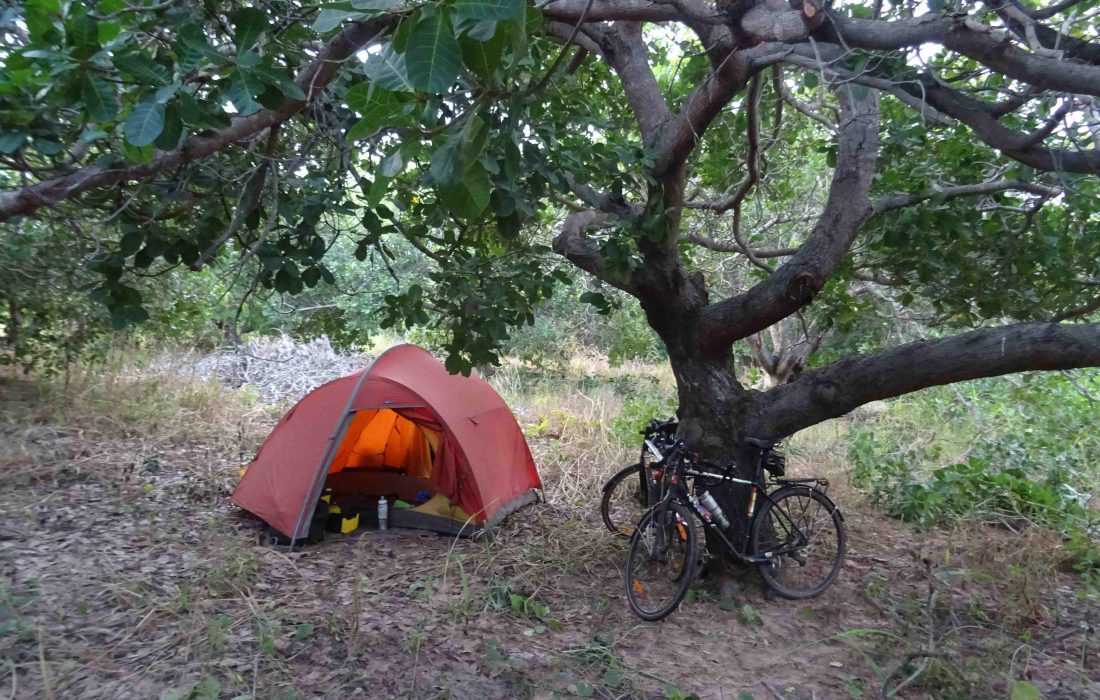 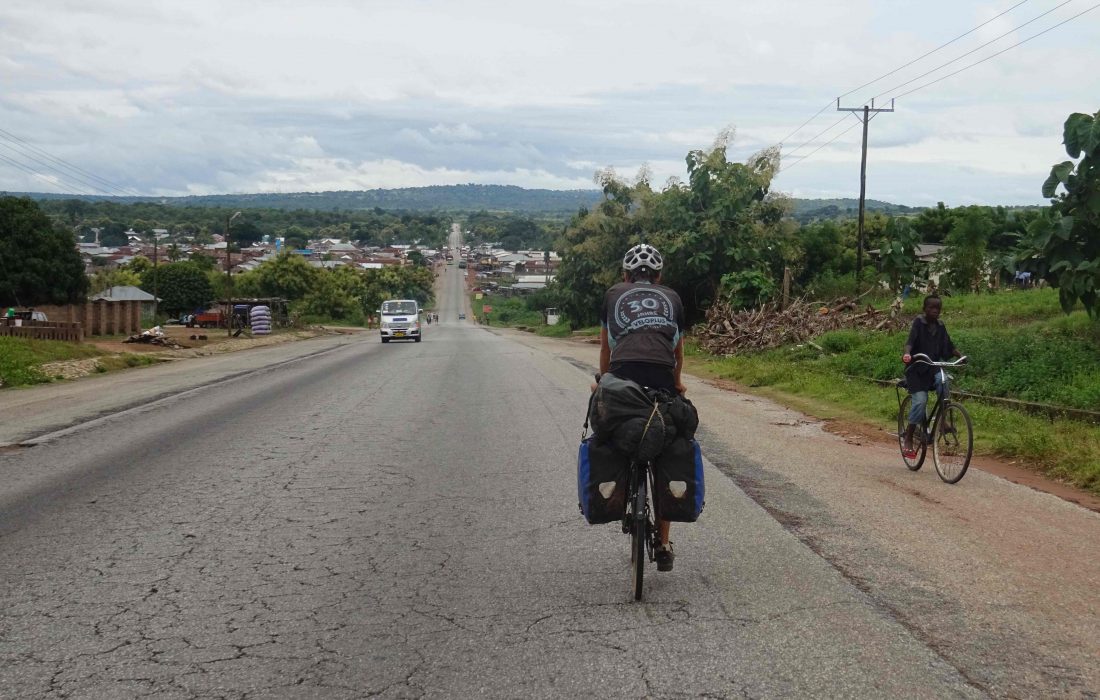 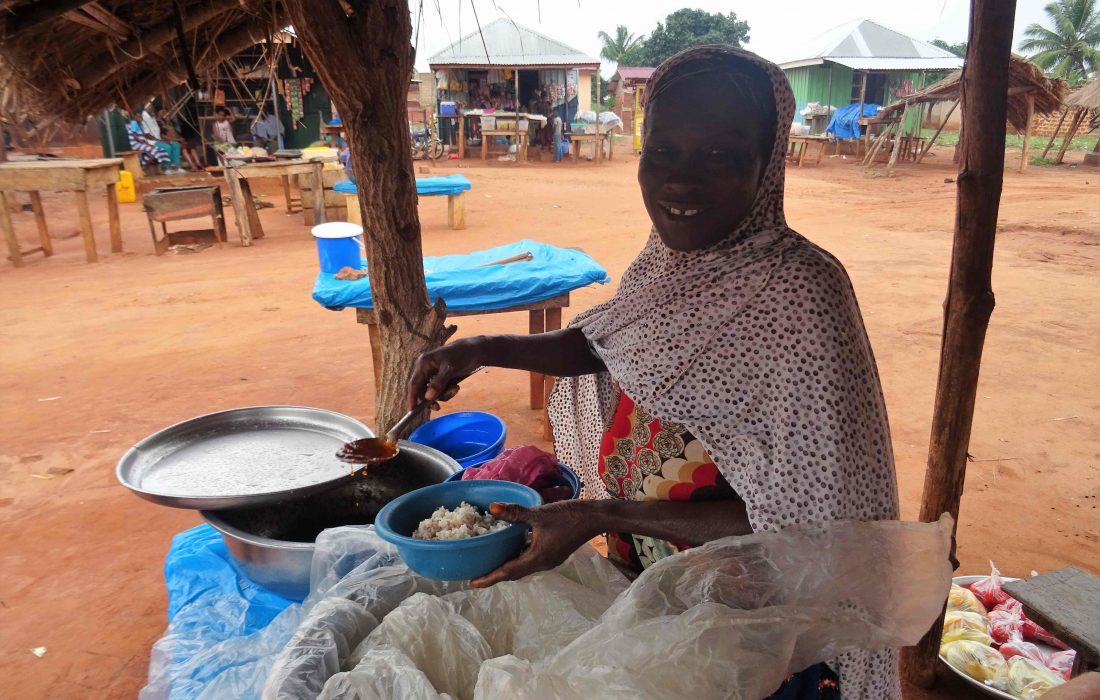 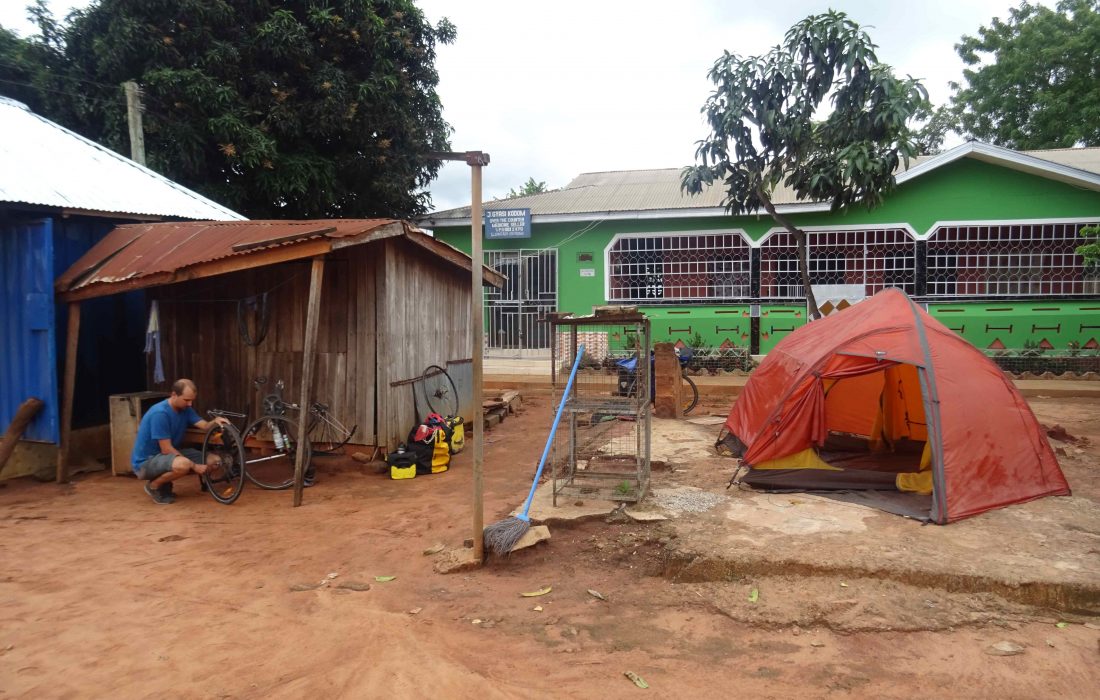 At eight o’clock in the morning, the parents said goodbye, since they went to church. They said that breakfast was ready and we only answered: “OK”, since were still half-sleep.

We continued mastering bravely the many hills and in Techiman, we strengthened ourselves for the following climbs. Suddenly, when we cycled behind one another on a clear stretch of road, a motorcyclist brushed Adrian from behind, lost his balance and fell sideways on the tarmac. During the camber, he fell from the motorbike and landed on the other side of the road. Luckily, Adrian did not fall and could immediately help the accident victim. Fortunately, he wore a helmet and had therefore only open lips and a road burn in his face. In addition, he had some scrapes on his arm, broken pants and his motorbike was definitely in a miserable condition. At least the motorbike was still rideable and the men could continue. Finally, we were all glad, since we knew that it could have been worse. 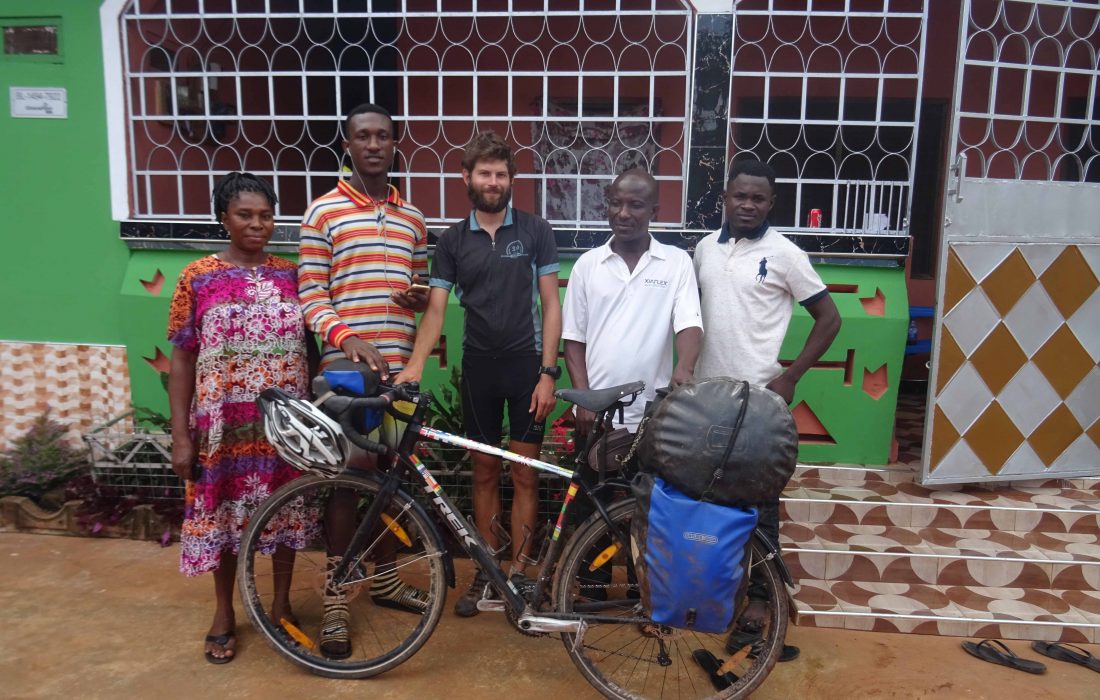 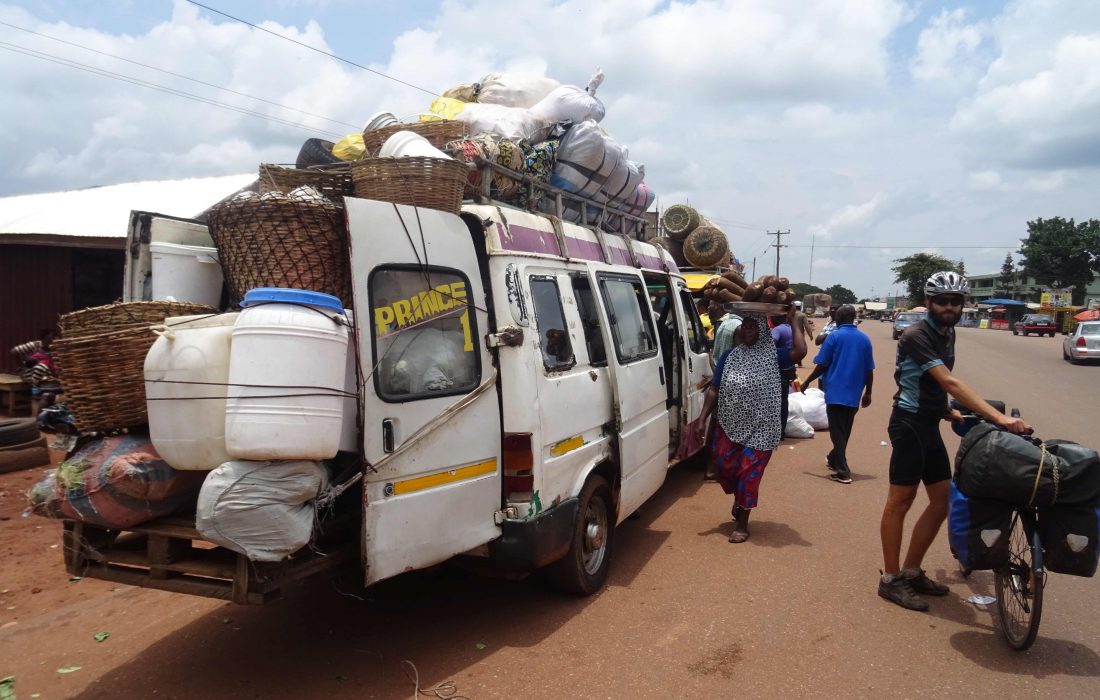 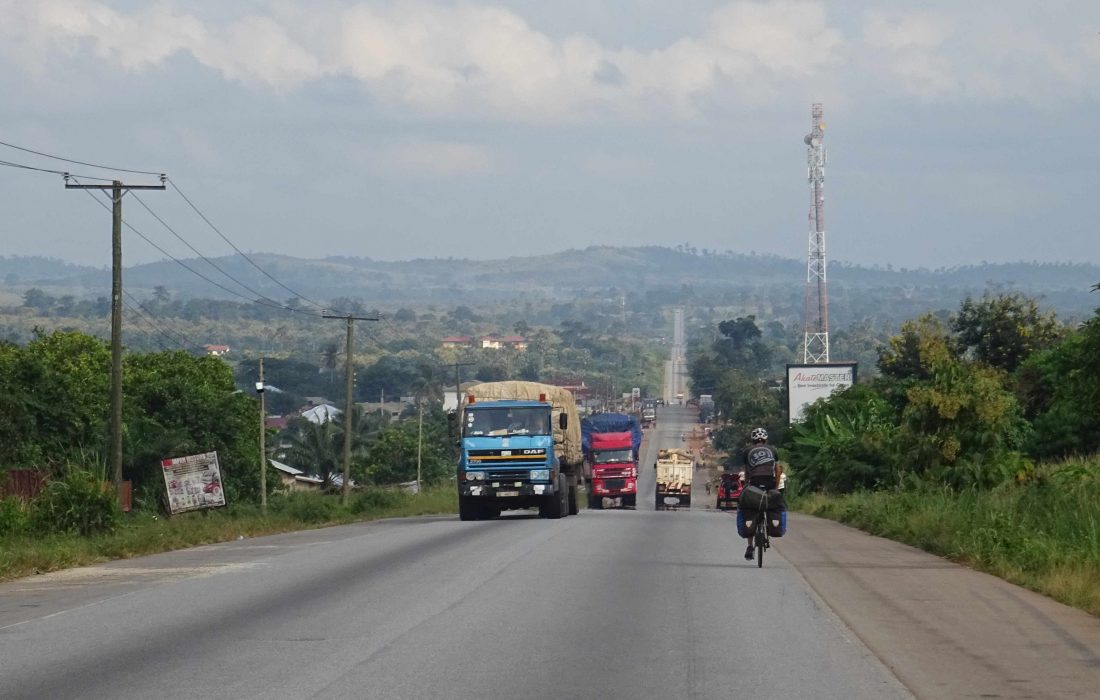 In retrospect, we even remembered that the motorcyclists who was involved in the accident crossed our path before the same day. He overtook us two times with his bike and corrected us how and where we have to cycle. We ignored him, since we had the feeling that we did everything in the proper way. Finally, we do not what his intention was or if there was a hidden agenda at the time of the accident.

In any case, we reached Kumasi and therefore the first large city in Ghana and had to fight ourselves through the stinky, dusty and loud traffic. On the way to our host Enoch, whom we contacted through Warmshowers, we visited the Kejetia market, which counts as the largest market in West Africa. The lively activities in the narrow alleys was rather impressive and we almost could not get our eyes off. Especially, the unbelievable strong women astonished us once more, how they carried extremely heavy things from A to B for only a pocket money. Later, we reached the large house of the Ghanaian and he liberally invited us to a local diner including a beer. 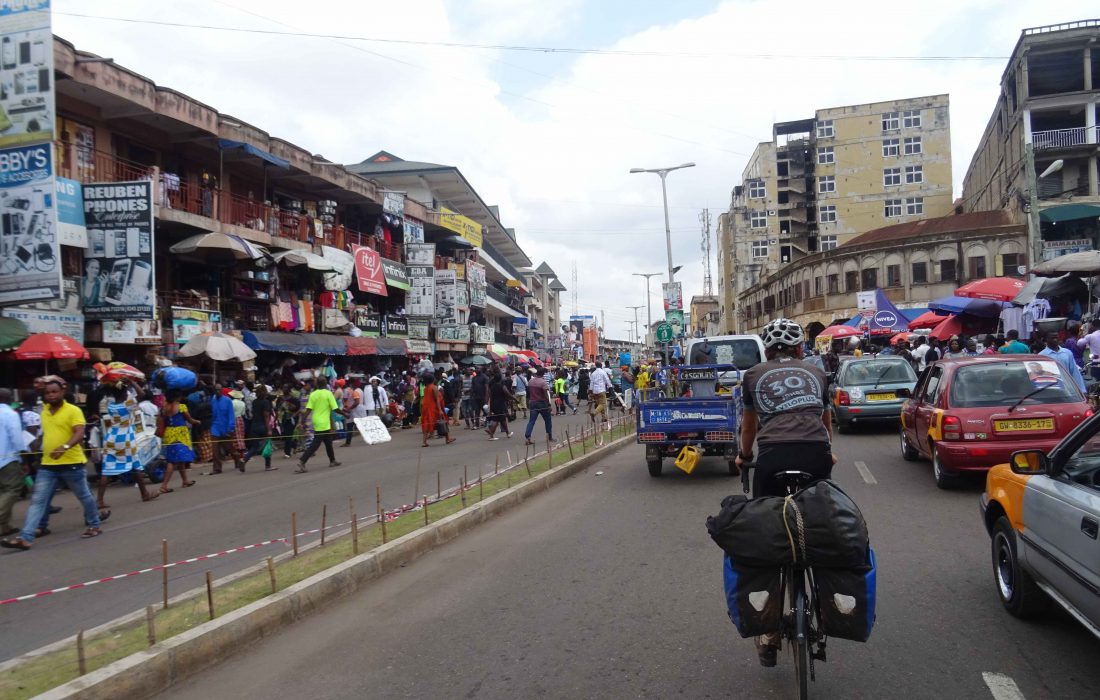 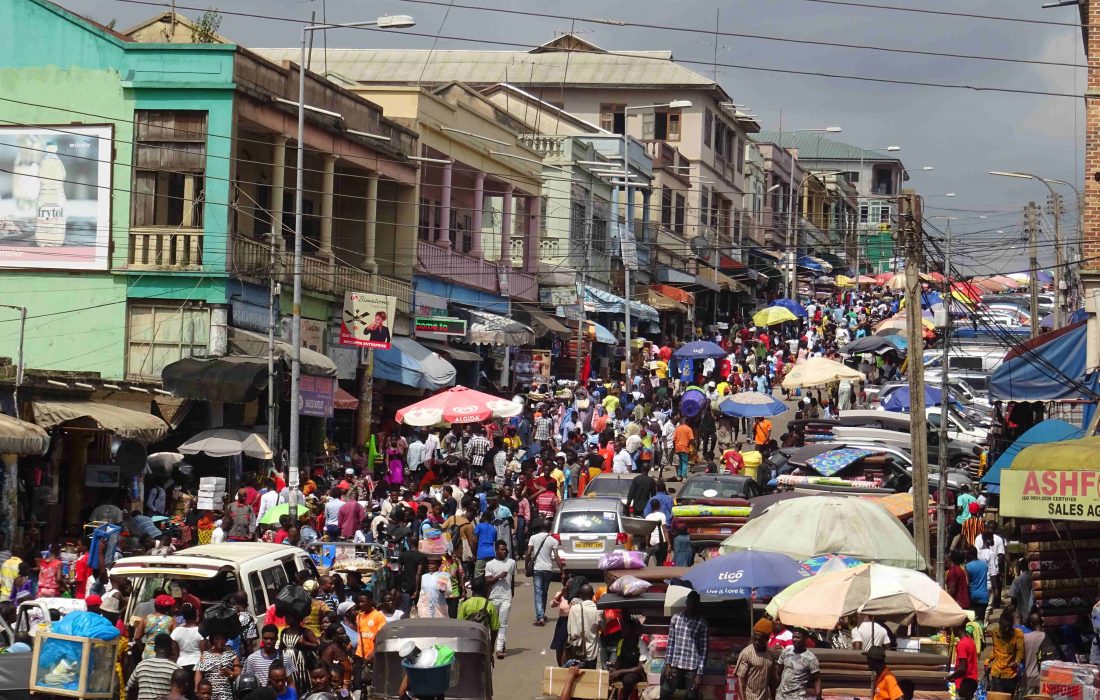 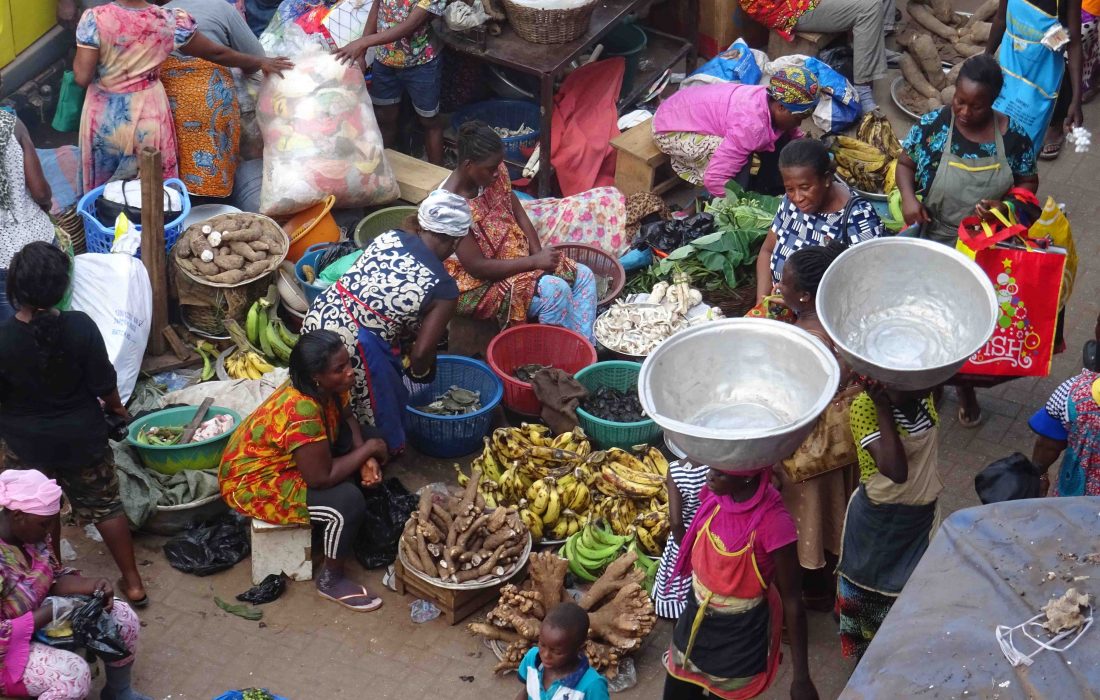 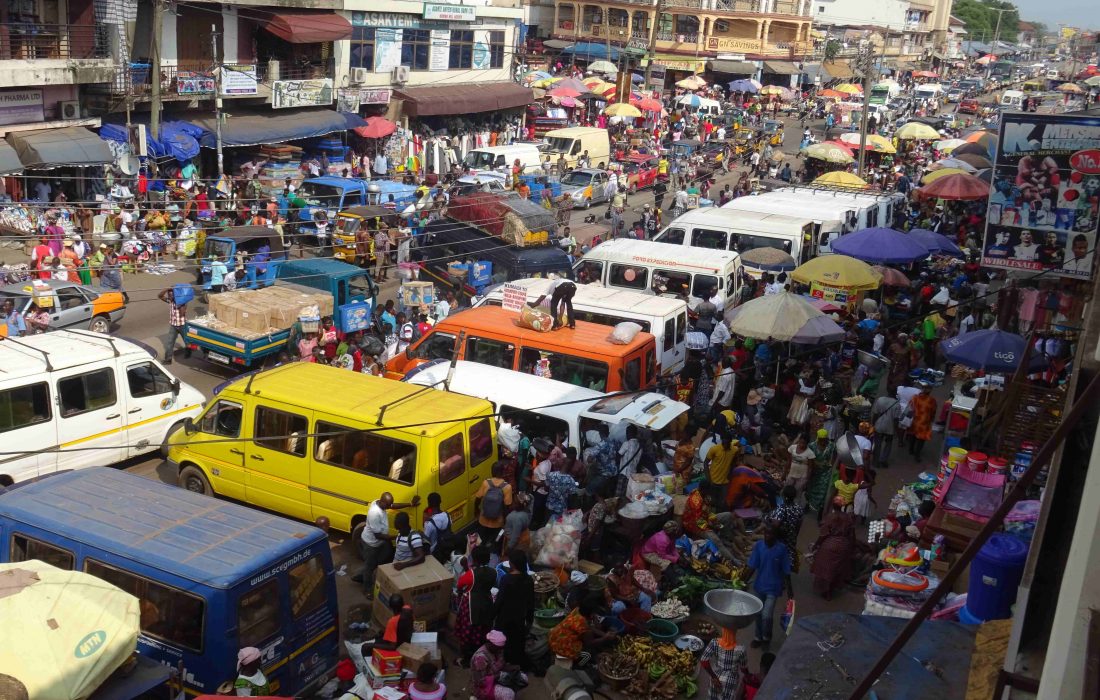 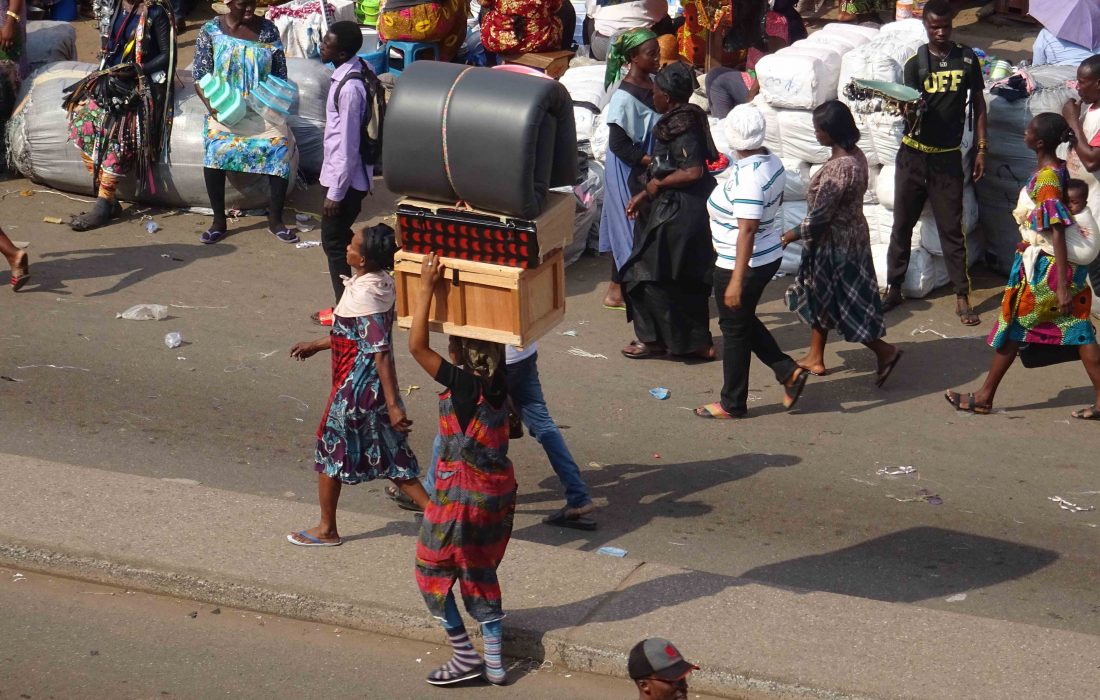 Kumasi is the capital of the former kingdom of the Ashanti with its great civilization. Ashanti is the heart of Ghana, located in the southern middle. The gold production is an important pillar in this region.

Enoch lived already in Scandinavia for a few months and told us without much enthusiasm about his time there. He had to work more than twelve hours in a fast food restaurant as a cleaner and was shocked about the coldness of the people and the region. Sadly, racism was often present and he is therefore happy to be back in Ghana. 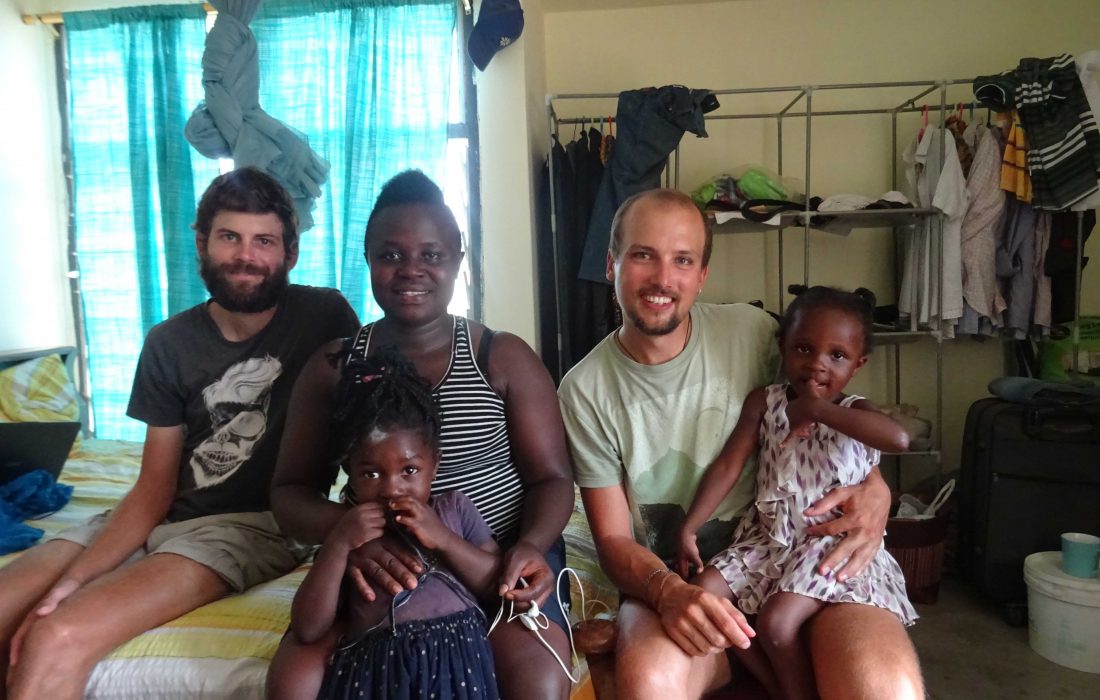 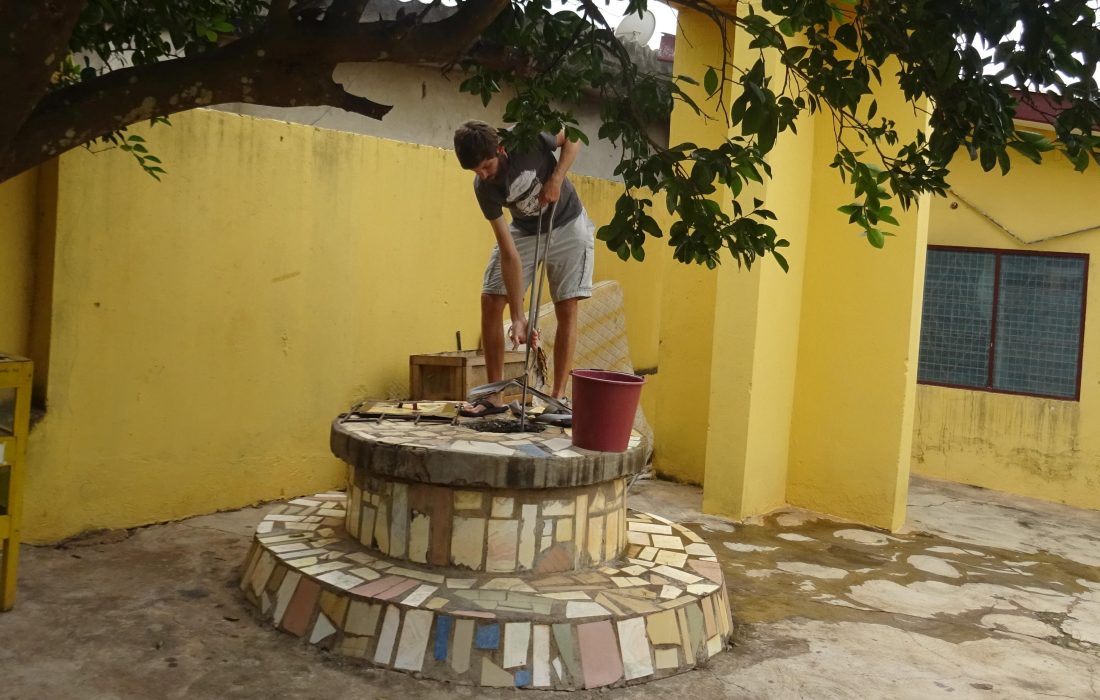 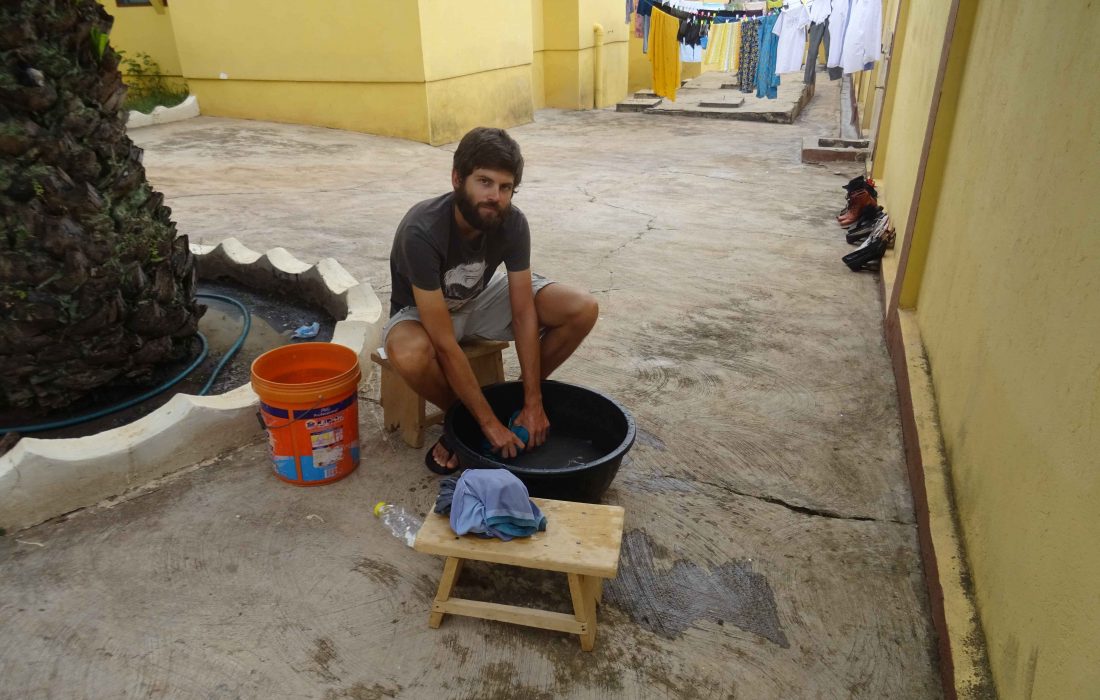 Instead of sleeping in the tent, we could sleep in Enochs bed and he desperately wanted to sleep in our tent. However, he did not want to sleep outside, since he wanted to get used to tent step by step. Therefore, we pitched the tent in hallway of the house and he was extremely happy with his new experience.

People in Ghana ask us a lot for money, even though they have a much higher standard of living than in the previous countries. The reason for that is probably once more the tourists who unfortunately give money or presents to the locals. In addition, Adrian was several time called Jesus, since his beard and his rather long hair looked like they imagined him. The Ghanaians did not even accept our proposal that Jesus was from Africa and therefore not white. After the visit at the hairdresser, who cut the unfamiliar hair unskilled with a toy scissors for two hours, the Jesus calls decreased.

A friend of Enoch cooked every dinner for us and we enjoyed the luxury of trying all the different dishes. The people in Ghana are always amazed when we tell them that we already tried all the local specialties and like it a lot. 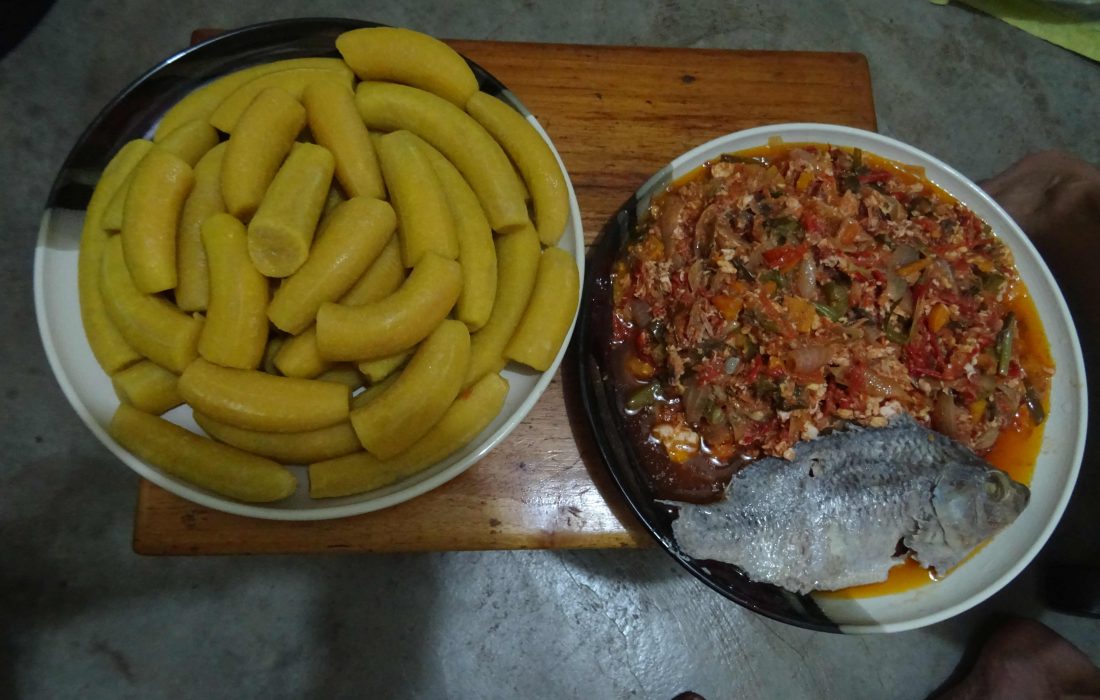 After a breakfast together with our new friends, we started cycling back towards the city center. There, we exchanged money on the black market with the help of a contact of Enoch. On the way to Lake Bosumtwi, we had to cycle some time on a dusty, completely destroyed road, climb a short and steep ascent and then pay the entrance fee for the lake region. Afterwards, the road led us down to the largest natural lakes in Ghana on an extremely steep road.

Next to a bar, called “spot” in Ghana, the owner allowed us to pitch our tent directly on the shore of the lake. Whereas we refreshed ourselves in the water, the hardworking fishermen pulled their fishing nets out of the water. Because of an important local goodness, who does not like iron, the fishermen still use narrow wooden planks for fishing. It looks like they hover on top of the water, since they only use their hands and feet to paddle. 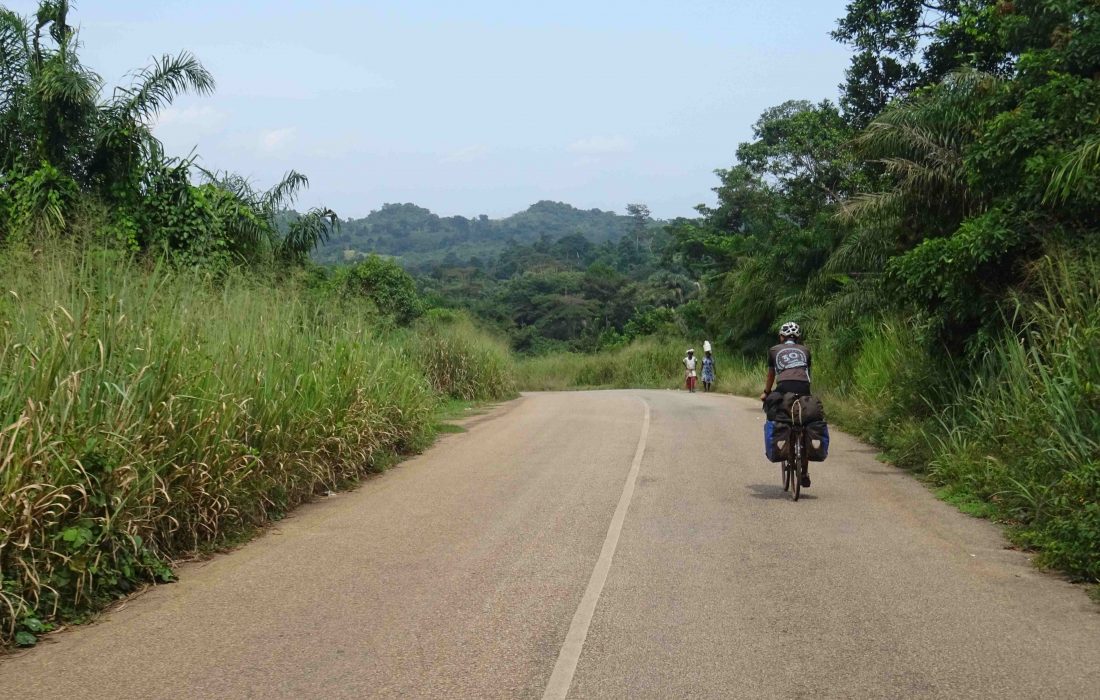 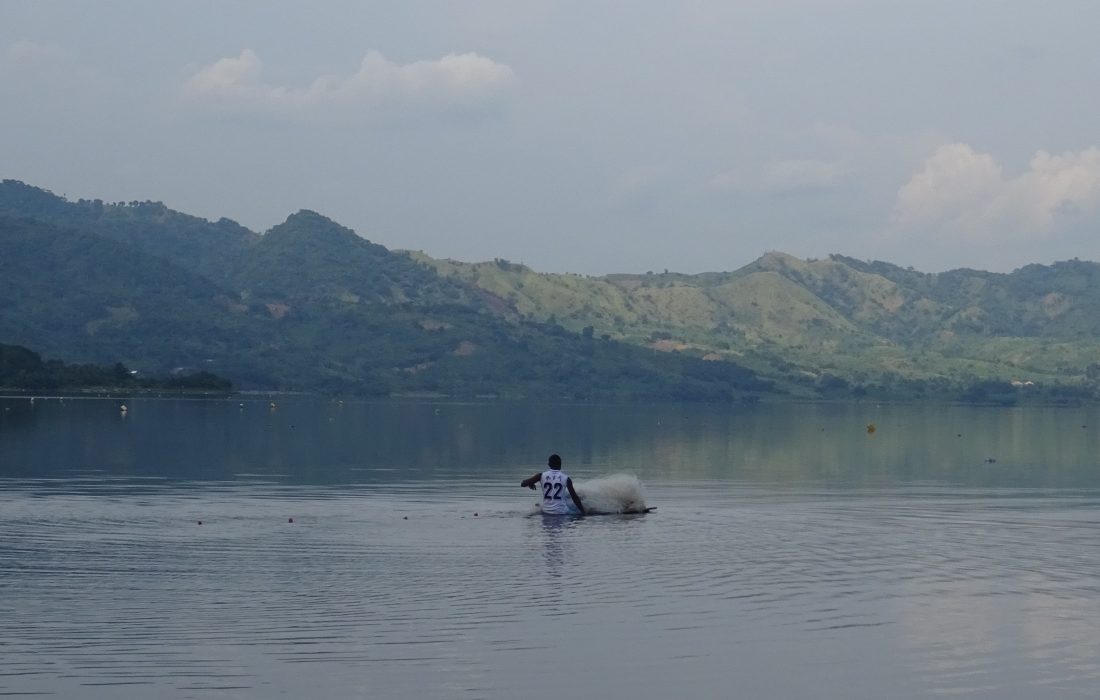 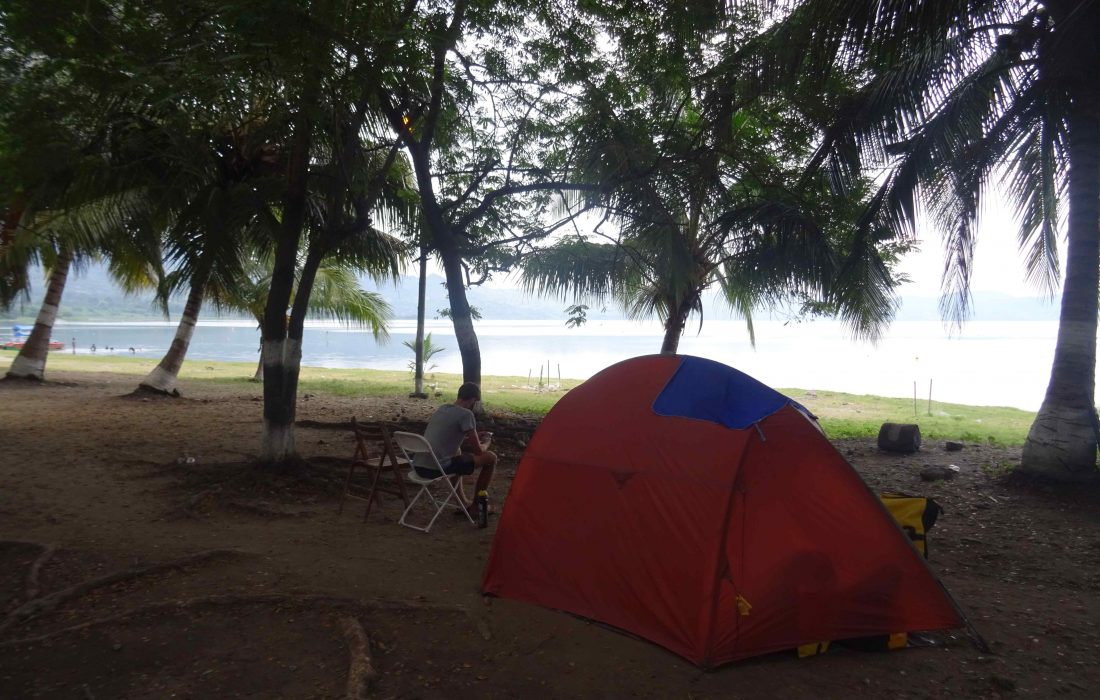 The steep ascent out of the lake basin, which apparently resulted from a meteorite impact, was hard work and especially for Fabian suffered additionally. He steadily lost air from his front tire and had to fix another puncture as soon as he reached the top.

A narrow road, characterized by potholes led us to the road between Kumasi and Accra. Many completely overloaded trucks pushed us to the service lane when they overtook us. Unfortunately, with our bicycles we are only road users of the second class in Africa and therefore have to make sure that nobody overruns us from behind. 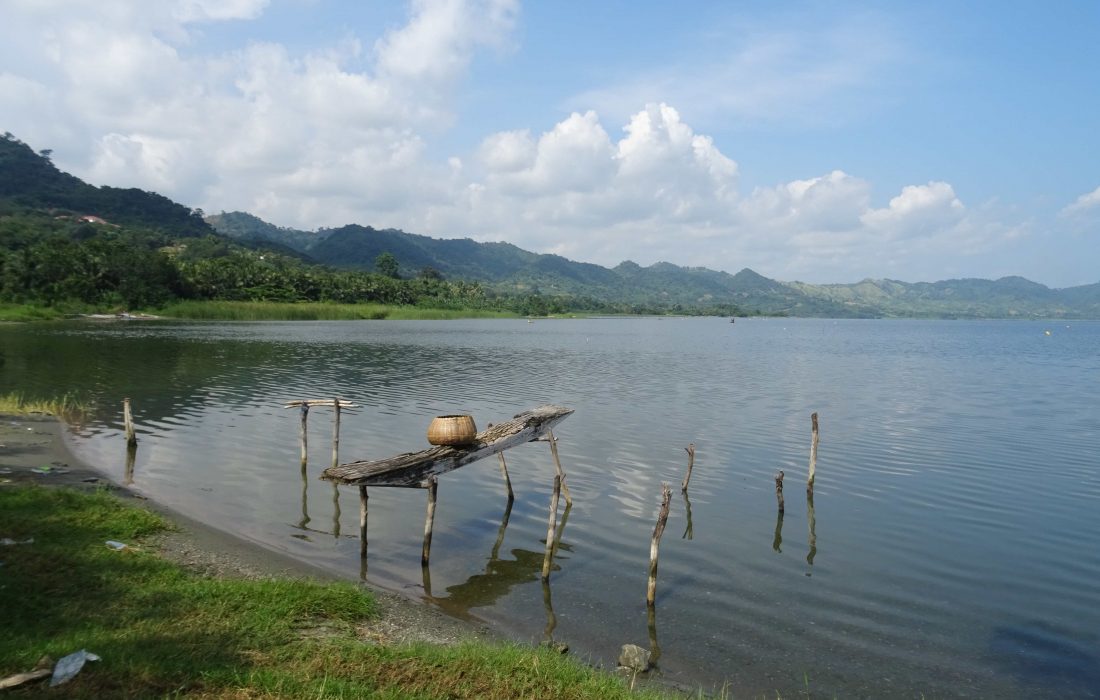 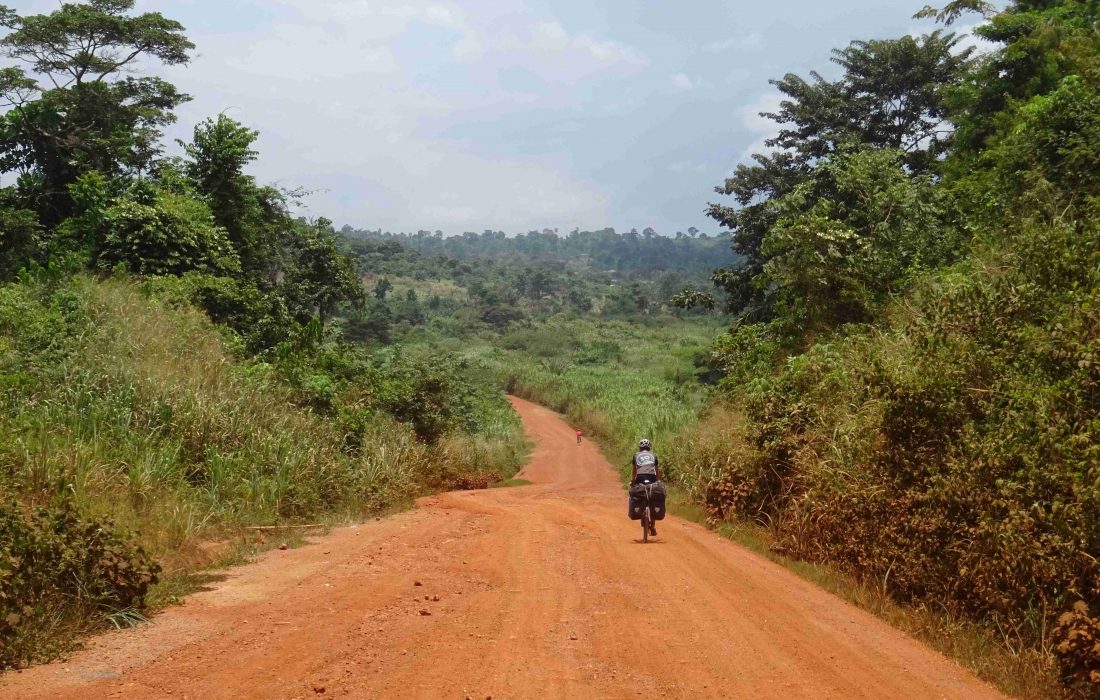 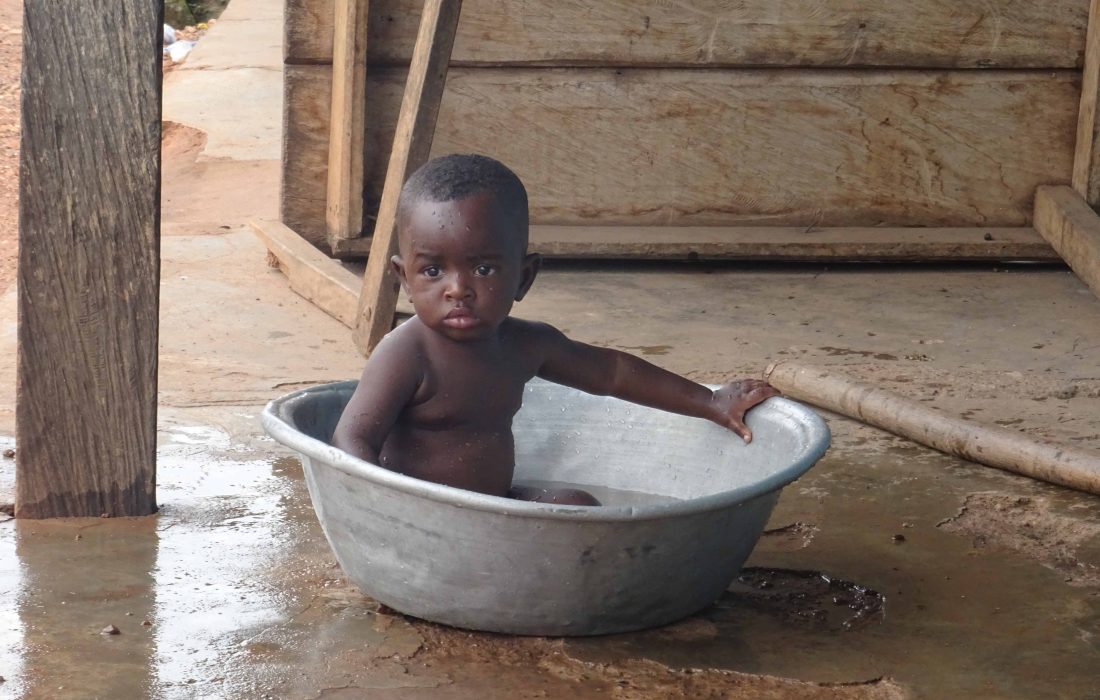 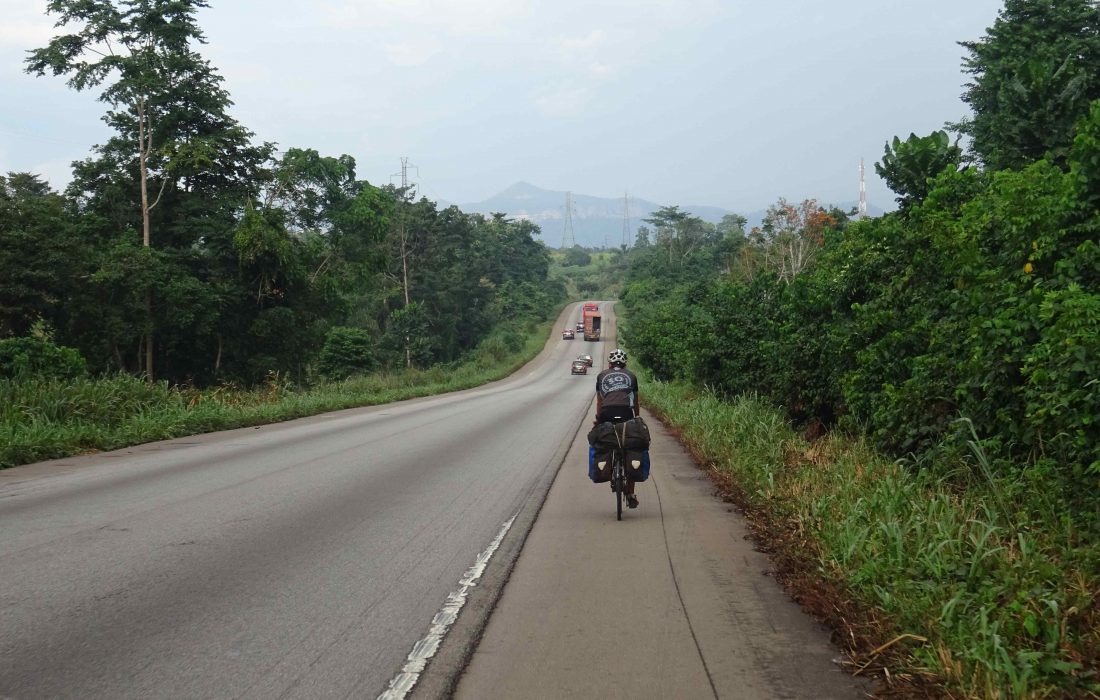