Luckily, without any rain, we left Monrovia and therefore our luxury accommodation. Soon, we reached the only (and tiny) international airport of the country. Shortly after, we cycled through the Firestone plantation. Firestone founded this plantation in the year 1926 and was the largest rubber plantation of the World at that time. Firestone, an American company, is famous for its tire production and bought 4047 million m2 land for a ridiculous price of 0.000015 USD per m2. This created jobs for 20’000 Liberians (10% of the workers of the whole country at that time). Liberia was called the Firestone republic back then. Unfortunately, the production stopped due to the war and is therefore on a lower level nowadays.

It was definitely impressive to cycle through the seemingly infinite rubber forests. A real shame that a huge part of the former forest was removed for the existence of the plantation. A few hard working men showed us how the newly obtained rubber was mixed with diluted sulfuric acid to solidify the white liquid for the transportation. 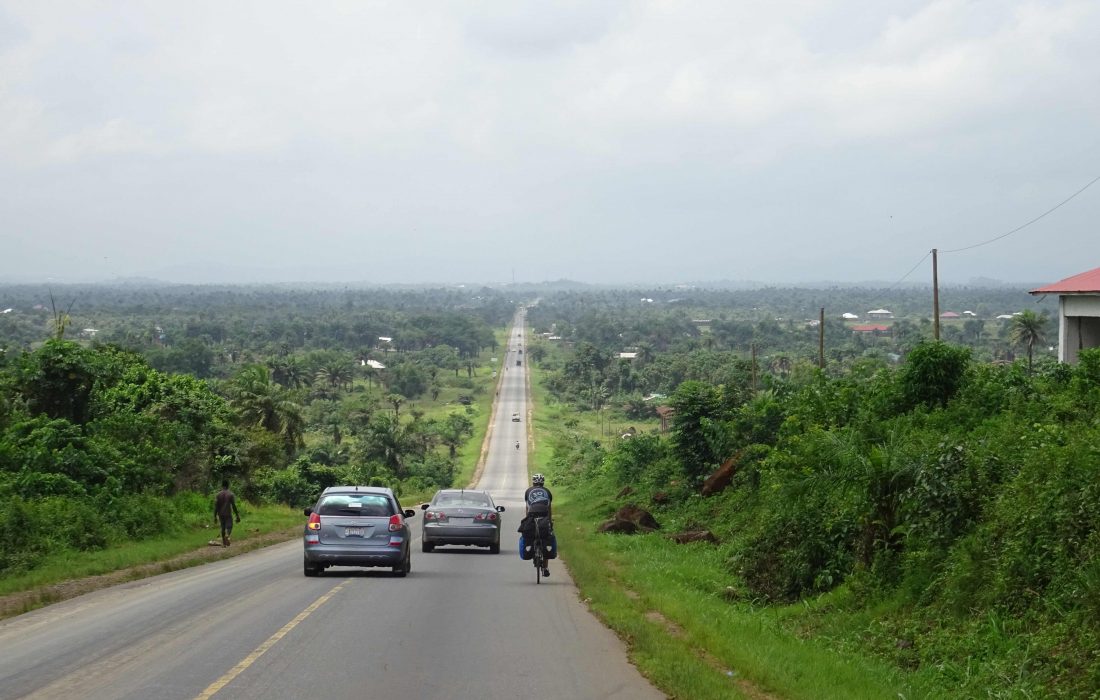 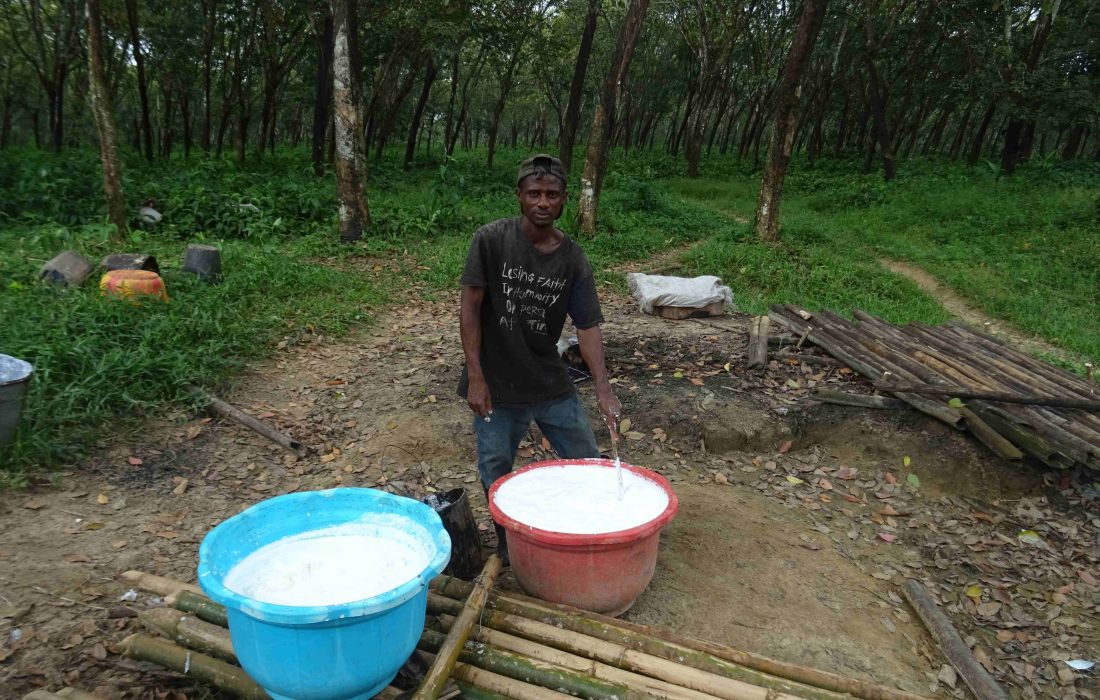 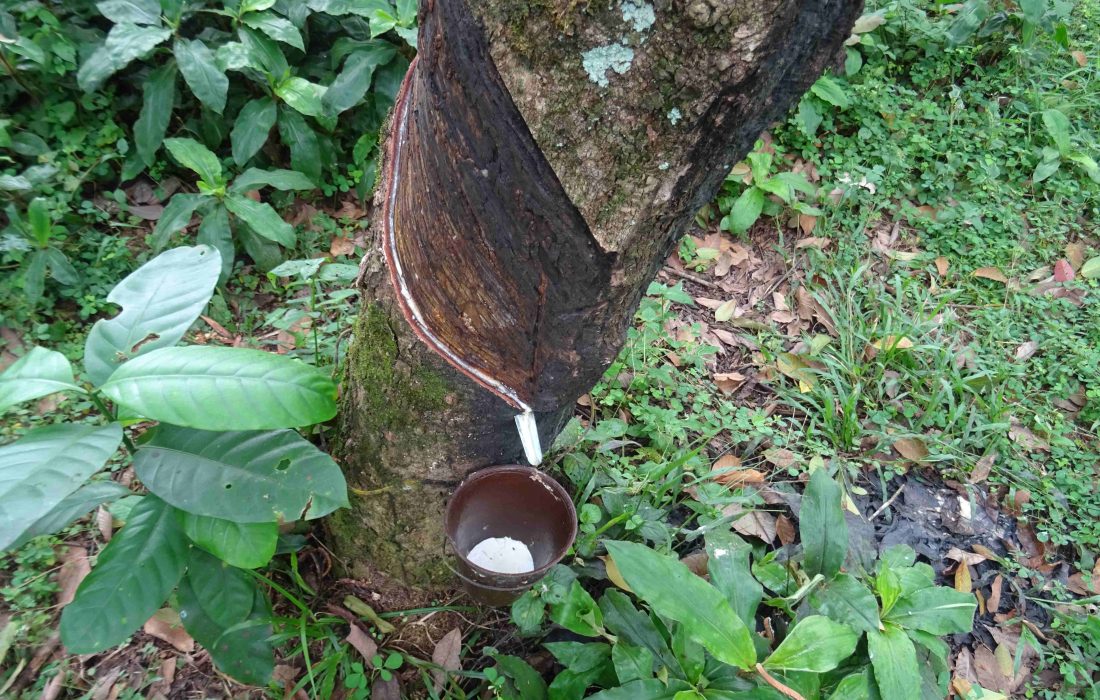 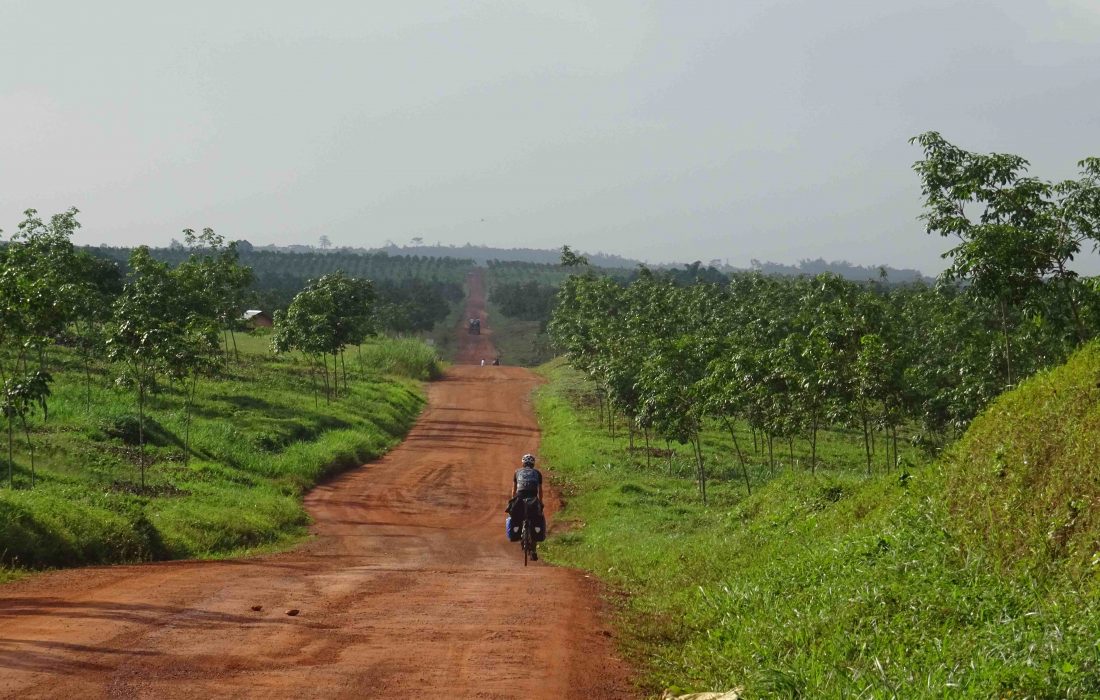 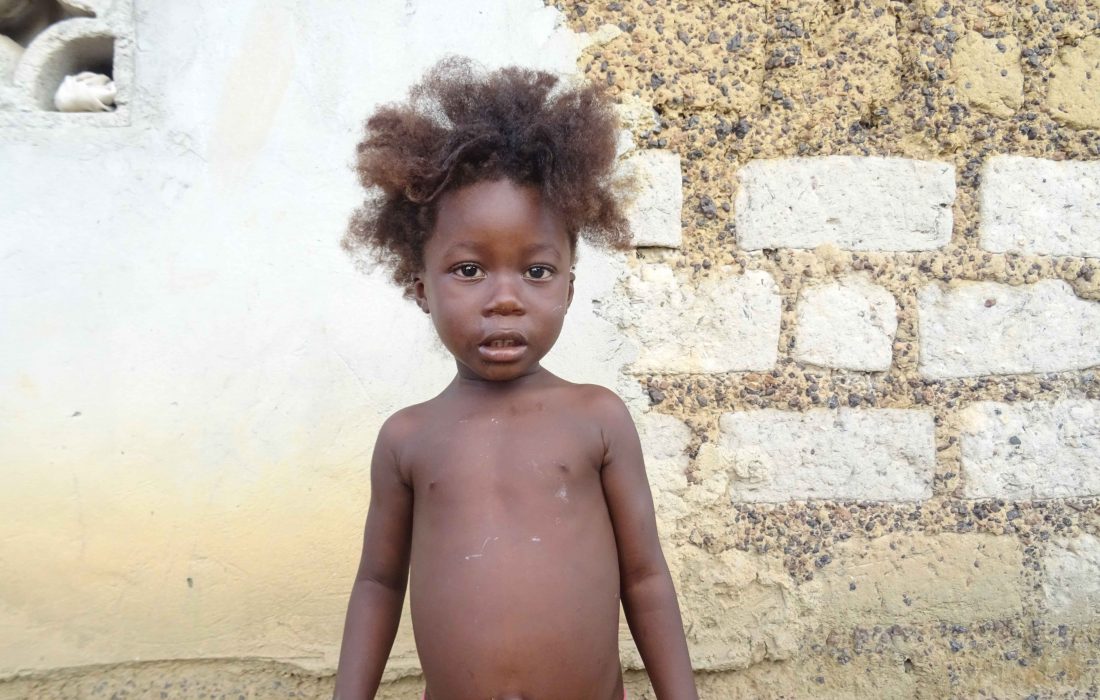 In the evening before, a village warmly received us. The village chief organized an accommodation quickly and half of inhabitants starred at us while installing our night camp.

Two women prepared our breakfast, which includes making a fire, organizing all ingredients and finally cooking the meal. Yesterday, we watched women while threshing the rice. For that, two or three women smash on the rice in a big mortar with large wooden sticks. Afterwards, the strong women separate the shell of the rice corn with a finely woven plate-like sieve.

Traditionally, the Liberians only ate when the meal contained rice. Many people in the countryside eat only one meal in the afternoon as a break from the hard field works. The reason for this is the habit and the lack of financial possibilities for three meals.

The road built a few years ago by the Chinese led us through hilly and even less populated regions. At some places, we met teenagers who never saw a white person in their entire life. 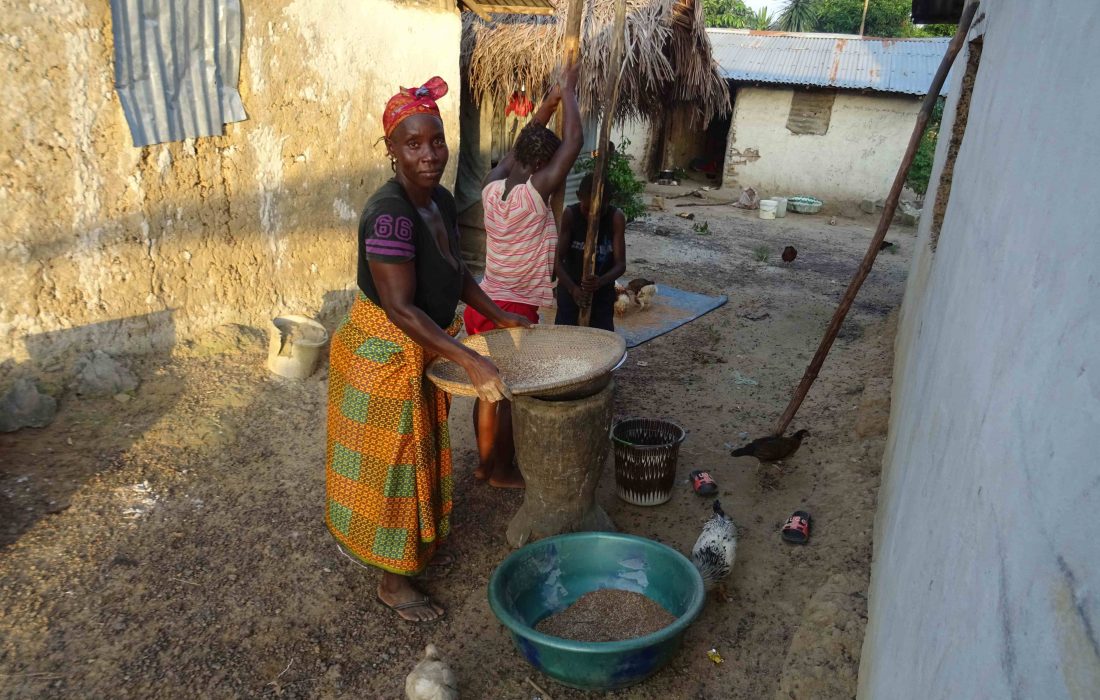 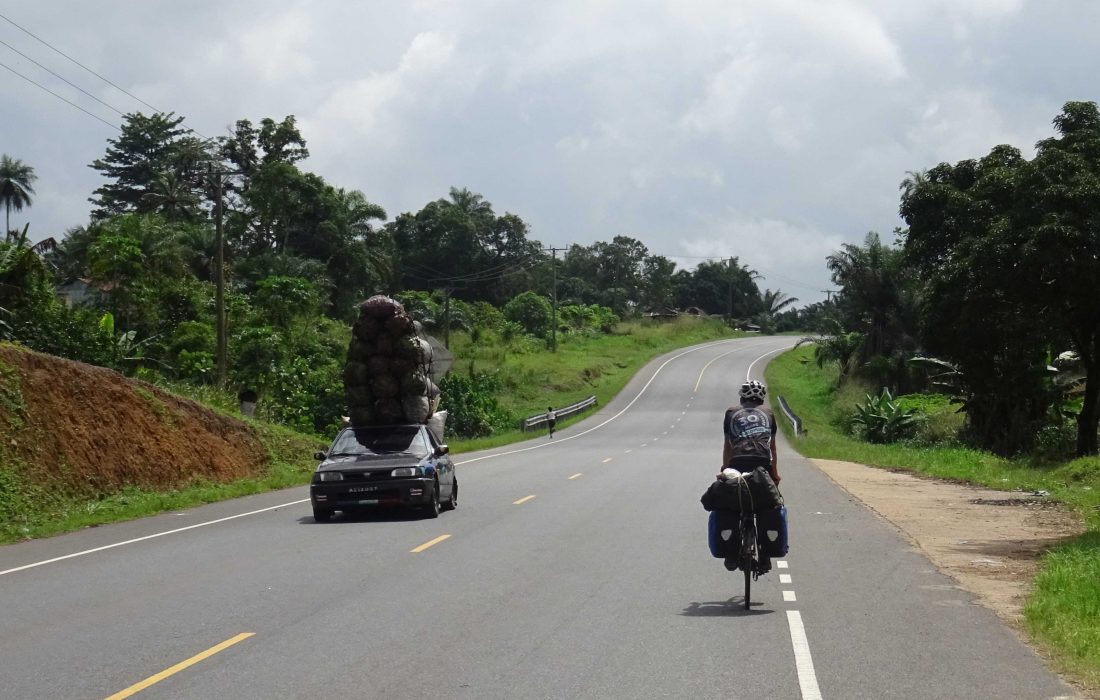 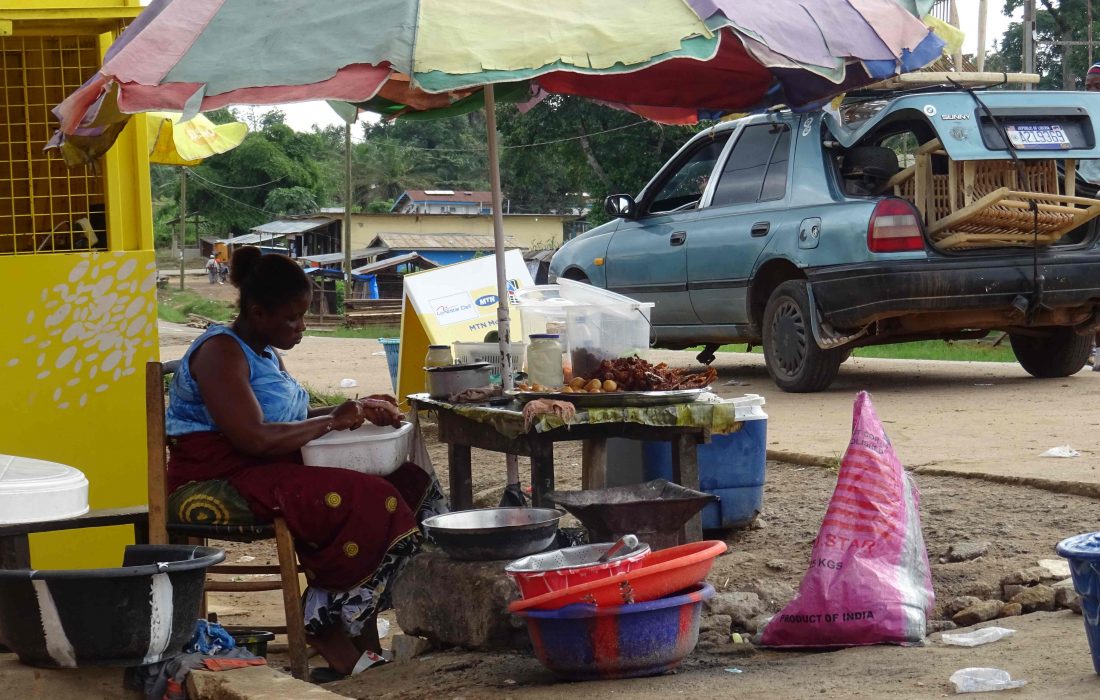 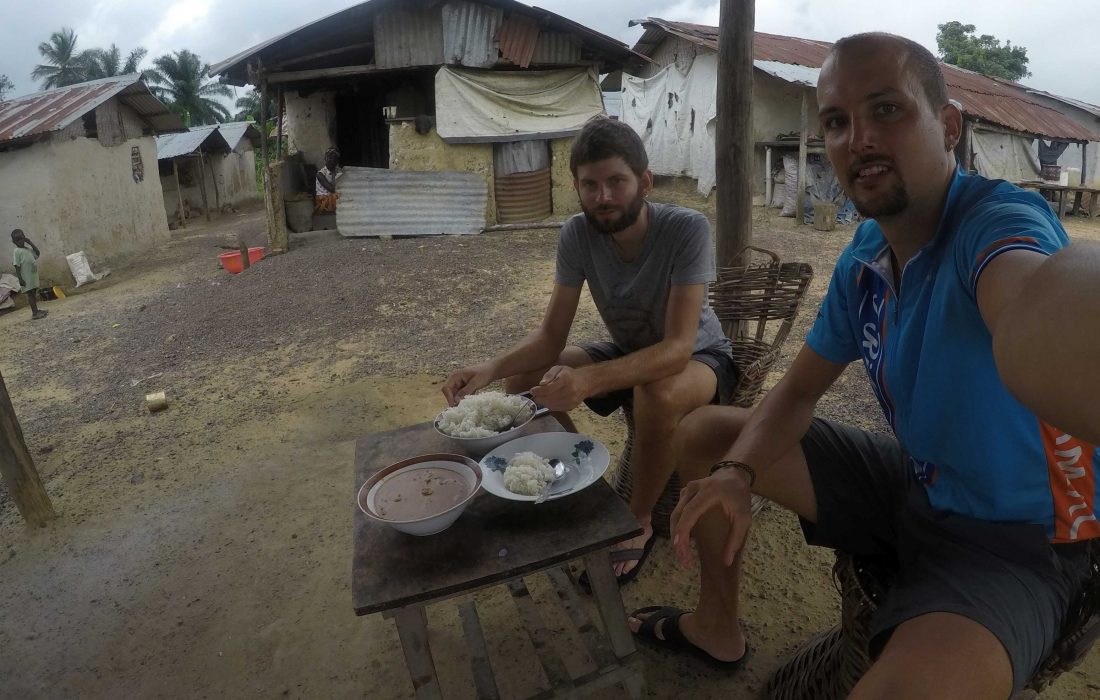 At a junction, we stopped to eat something and as all too often men attacked us with questions from everywhere. Of course, we find it very interesting to tell our story and are grateful for the active interest in Liberia. Sometimes, we just want to eat in peace and recover from cycling. The interest in Liberia is in such an extent, because of extremely small number of tourists and the dream to immigrate to America.

Now, of all times the headache, whom Adrian had since we started cycling, got worse and limb pain started to occur. Afterwards, we cycled another hour and could sleep in the office of a nice traffic police officer. The bicycles were deposited directly next to the cell were the only prisoner was captured. 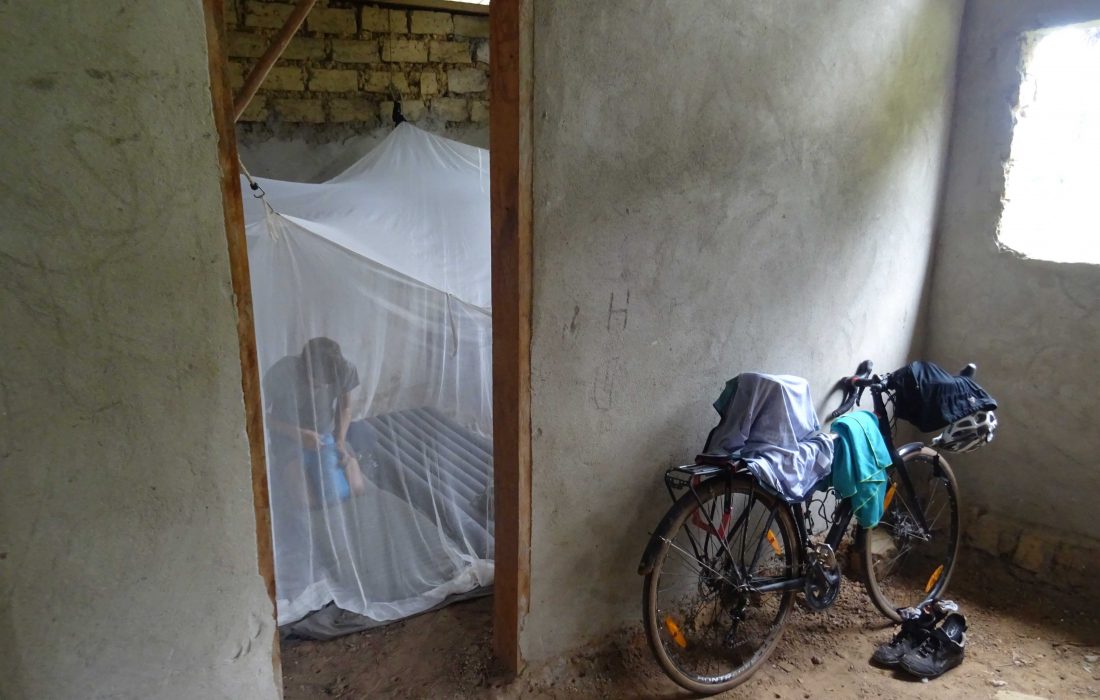 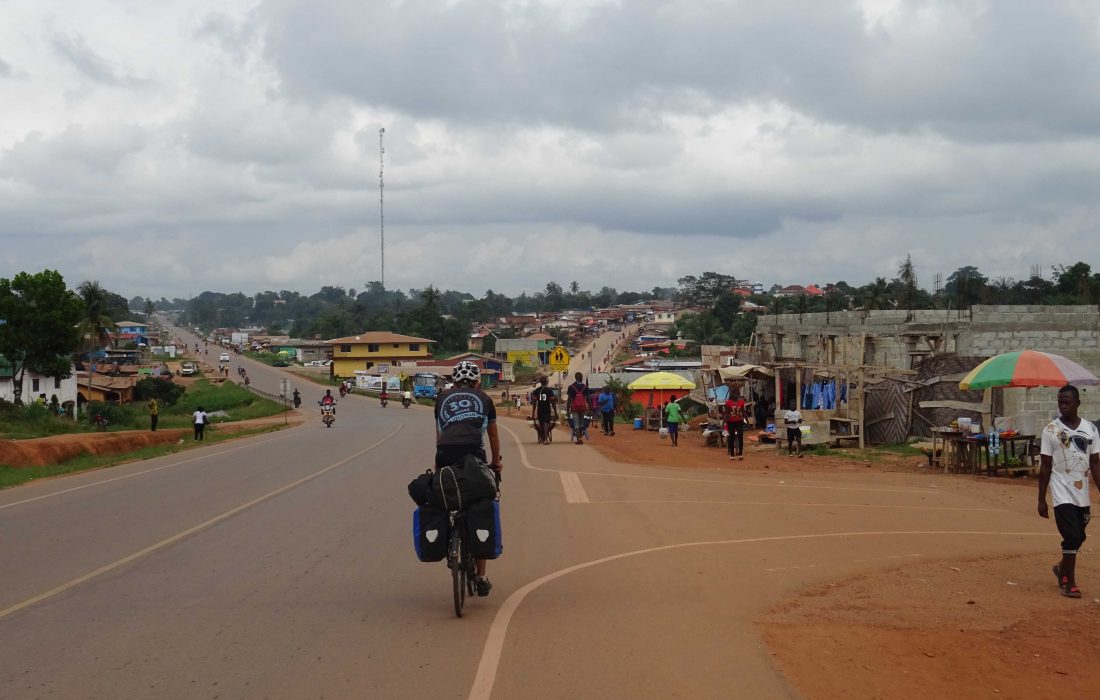 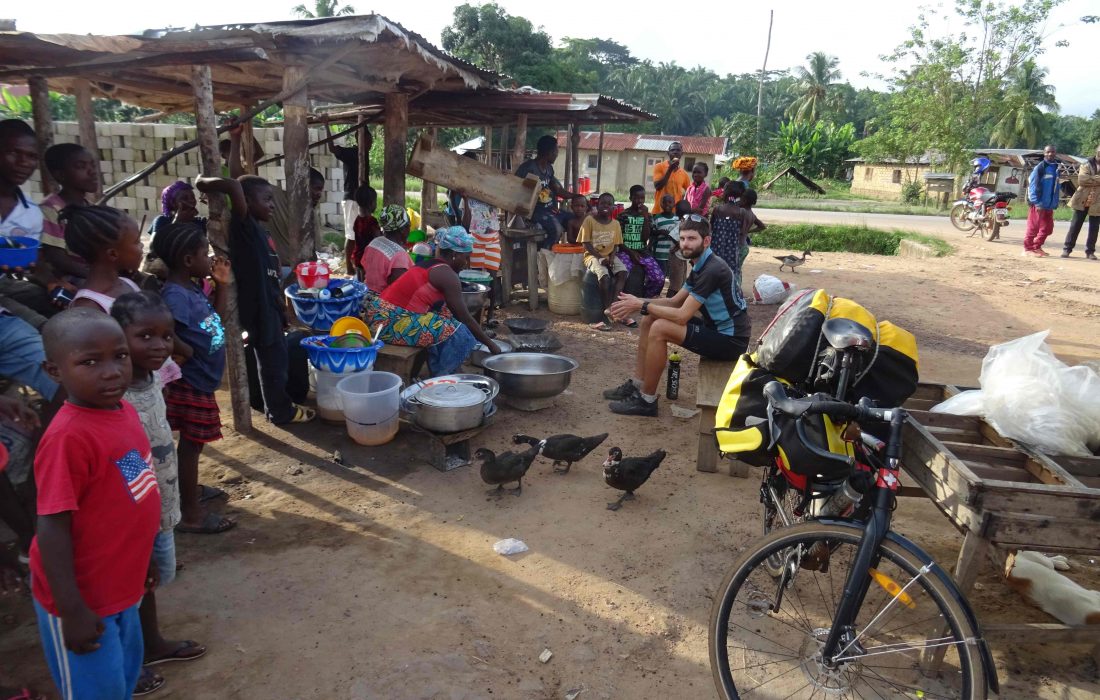 Since Adrian did not feel better in the morning, we visited a pharmacy and made a malaria quick test. This test showed clearly a positive result and for totally 4 USD, we could pay for the test and all necessary drugs. For three days, one swallows the pills at regular intervals and then one has to hope that all is over. On the other hand, the Liberians would tell you: It is up to God’s grace!

So far, Liberia is the first country on the African continent with a majority of Christians. We have seen dozens of different churches and sects in the country. Therefore, we noticed for the first time when it is Sunday, since the village atmosphere is calmer and different. In addition, we hardly find food, since most cook shops are closed.

For our daily bucket shower in an old, abandoned and completely overgrown building without a roof, we always got water from a close by well. When we filled our buckets, we observed how four overweight, loud laughing middle-aged women produced soap. The white mixture, from which they formed the soap balls, contain cooked palm oil and a strong base. After they are dried and cooled down, the soap balls are rock solid and are ready to use for cleaning. While the friendly women explained us the process, many children gathered around us. Some of the boys even wore make up, just for fun, so we used the opportunity to get some shots.

In the three days in Palala City, we visited all restaurants with various styles of rusty corrugated sheets, if they had a roof at all. Many villagers knew us already and it felt pleasant. A nice, friendly cook, we visited several times and she was astonished that we would not eat her pig knees and prefer only the rice with the meat sauce. 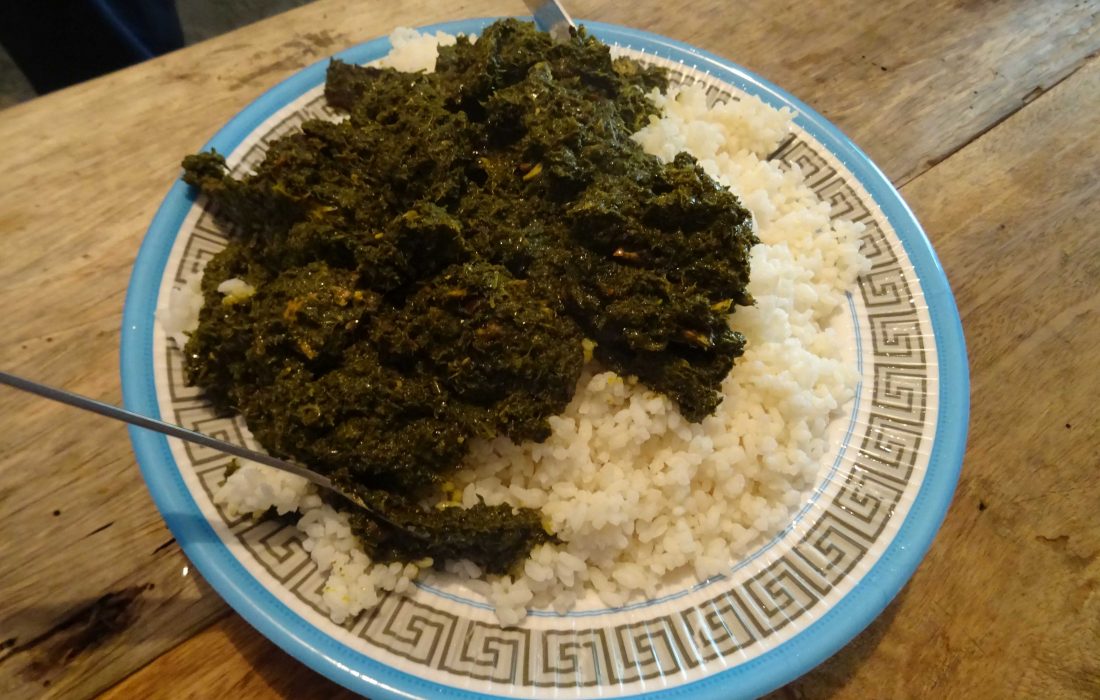 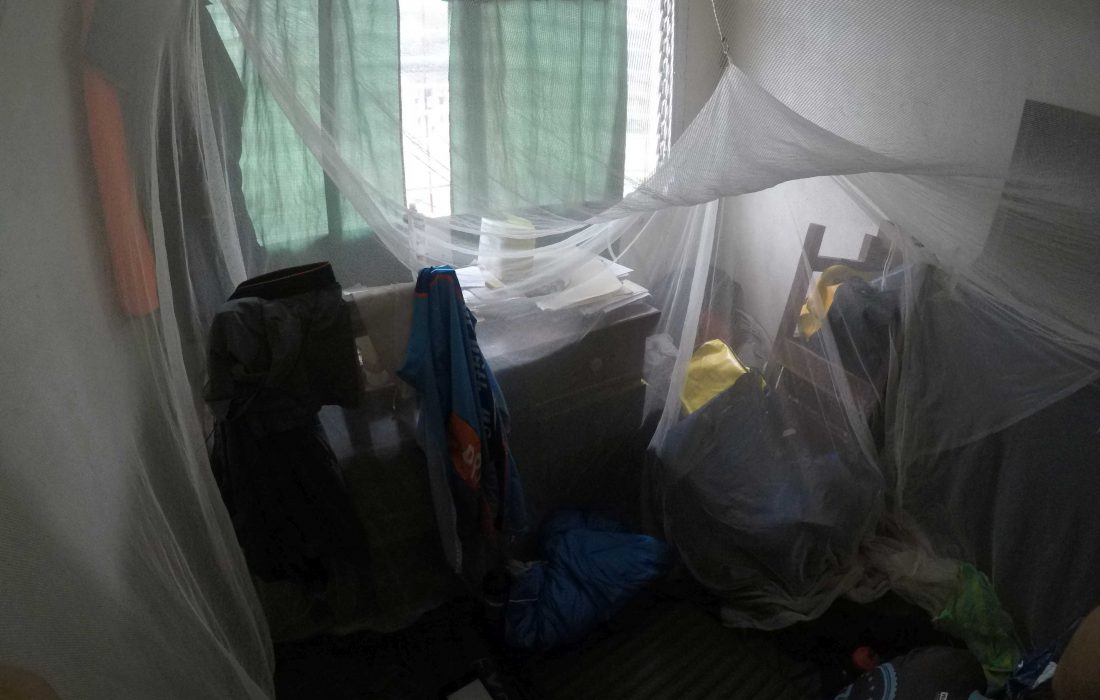 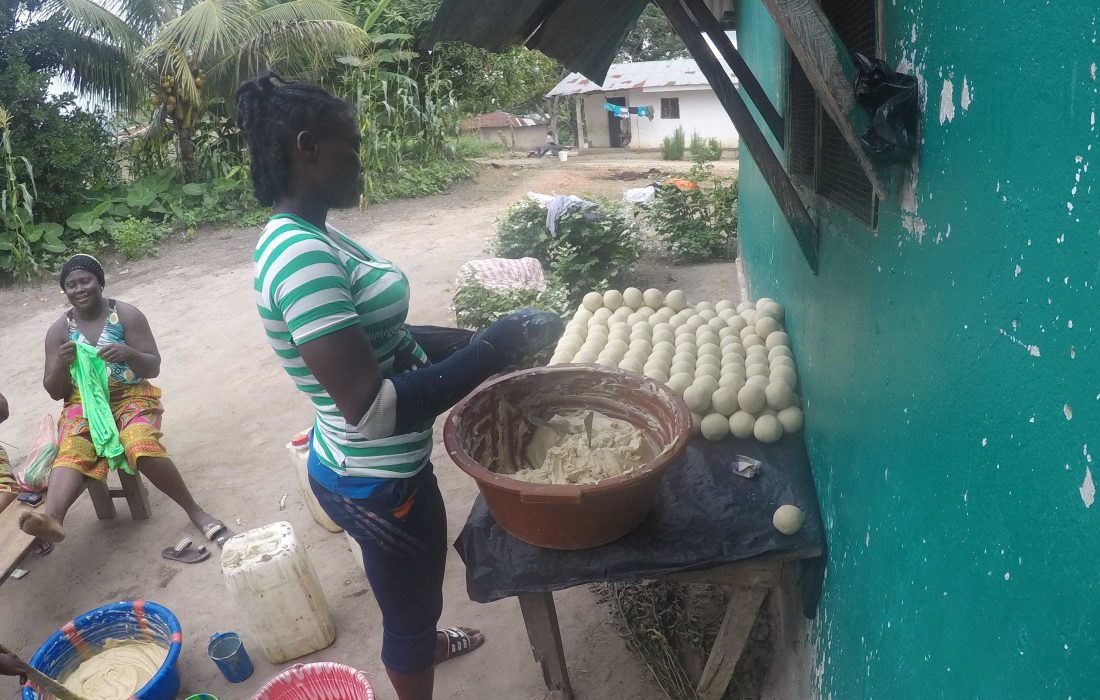 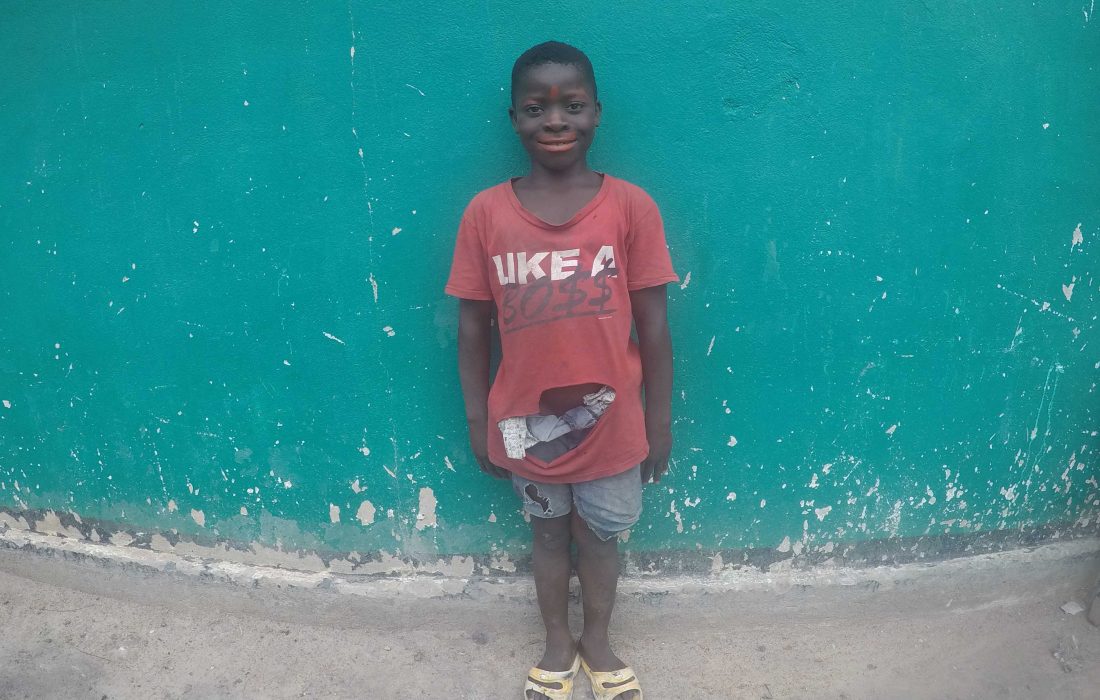 After three days, partly with strong fever, Adrian felt fit enough to continue cycling. We gave the forthcoming traffic police officer, who was by the way the only police officer with a uniform we saw during our whole stay, his office back. He never entered his office not one time during our stay, probably out of respect. Chances that he would find anything in the huge chaos of DVDs, car parts, pieces of clothes, vegetable oil and a few notes was anyway pretty small. We said thank you for the excellent hospitality and finally continued cycling.

In Ganta, the tarmac road finished and our Liberian gravel road adventure started, even though the police told us that we had 100 km more of tarred roads. Anyway, we fought ourselves through the washed out and muddy roads. Soon enough, the bicycle made sounds louder than a honking motorcycle and brown-orange mud covered us from head to toe. Especially Fabian, since a passing car splashed him hard. 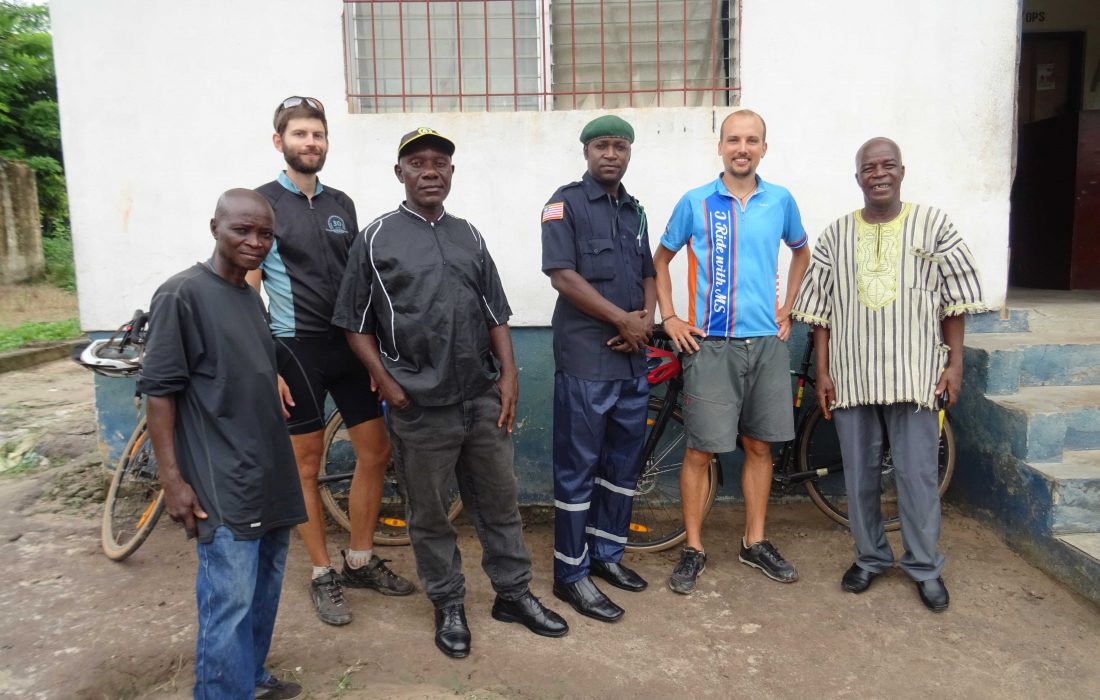 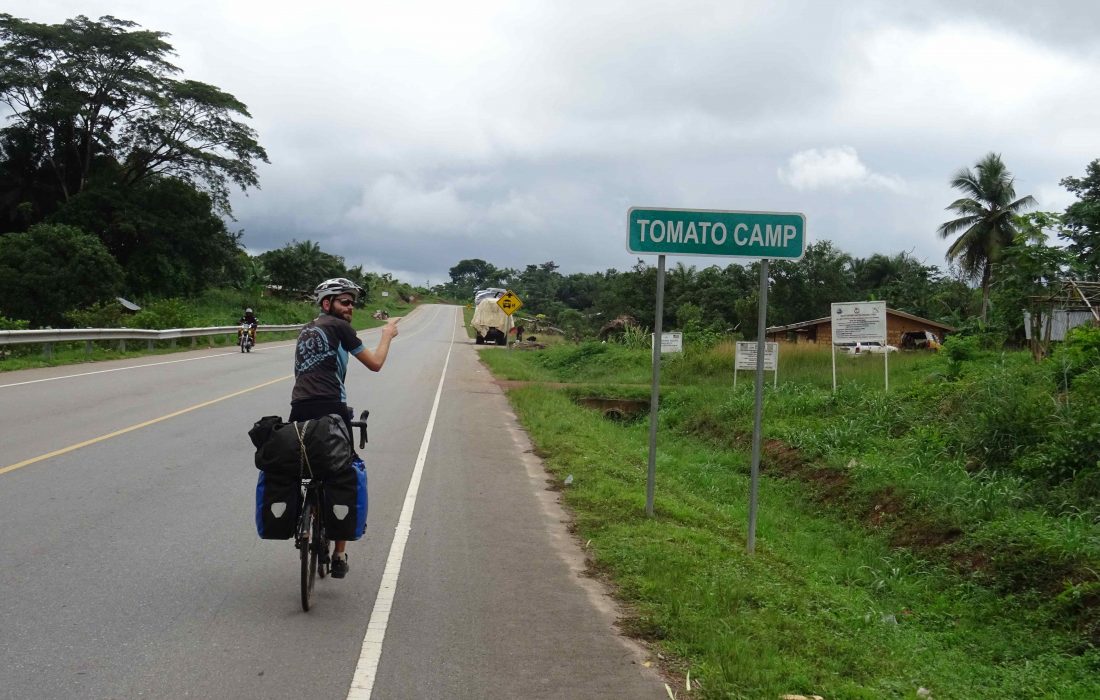 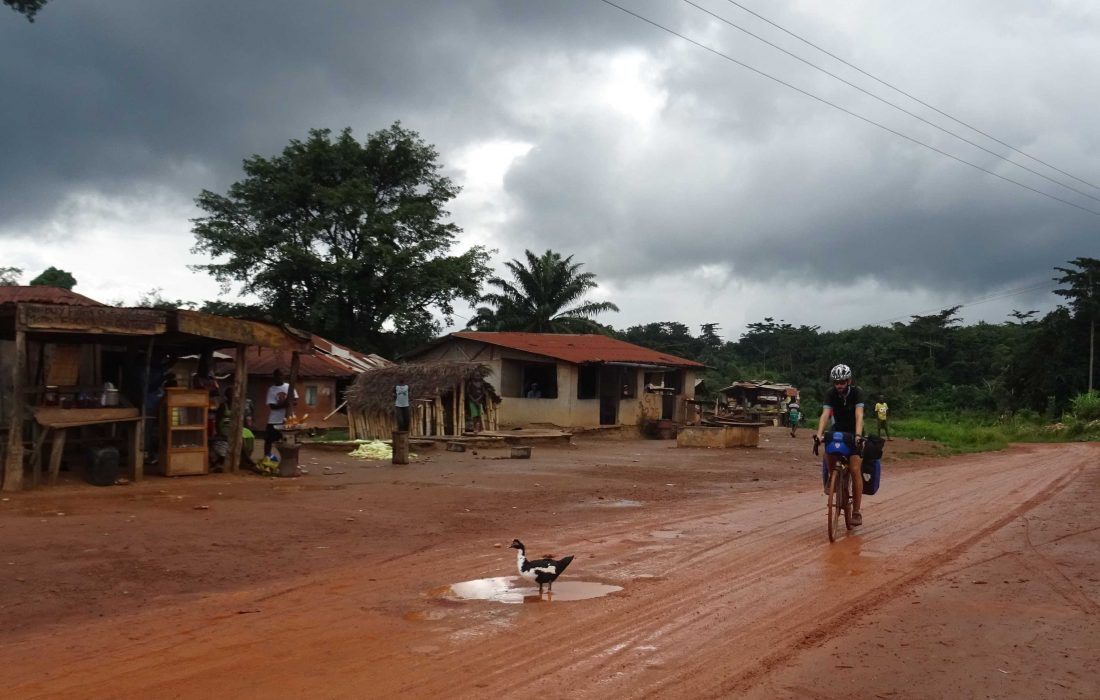 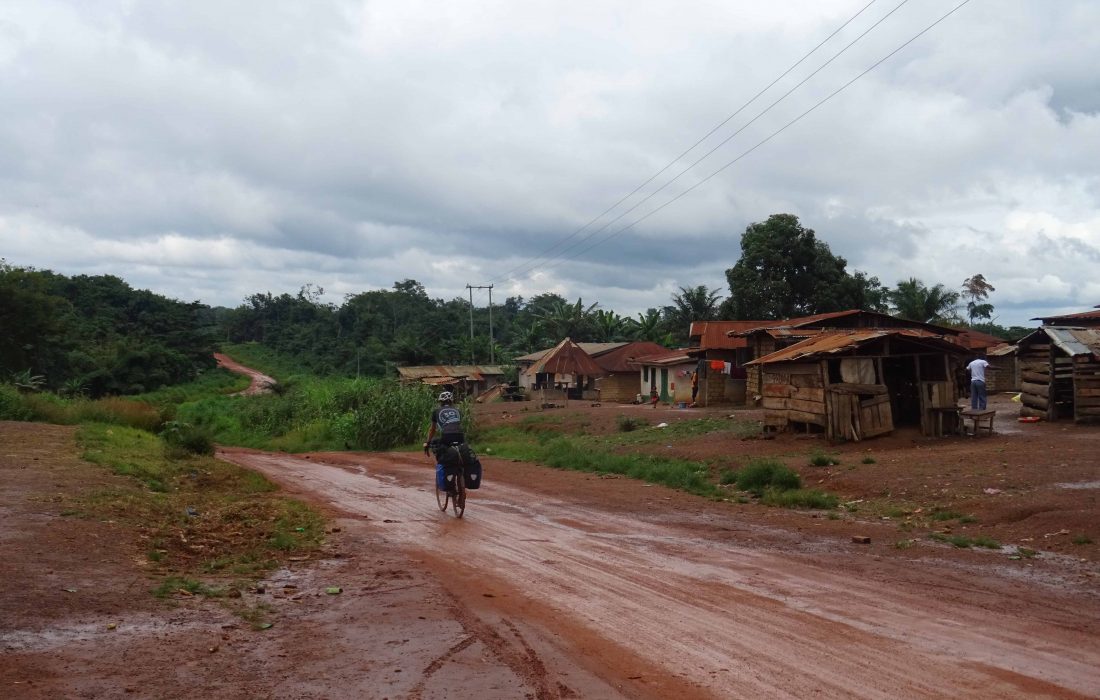 The guesthouse of a rubber plantation was the most luxury of all accommodations we found so far in a village. In the evening, we even had electricity; we had a sight-protected room to wash ourselves and the wife of the security guard cooked delicious food for us.

The road condition got worse and worse and the rain did not even stop from a certain point of time. The eventful day started with a tore gear changing cable on Fabians bicycle, which he replaced directly on the muddy road. Slowly, we realized that we entered the backcountry of Liberia. Especially, when we did not found any food stalls in a larger town and had to get full with grilled corncobs or cucumbers. During the following downhill, Adrian’s front wheel slide shipped and he landed in the dirt in a sideways position. The whole village laughed and screamed in our direction. After a few minutes, we saw that there was an alternative way, unfortunately too late!

The rain softened the road in a way that it felt like we had to cycle on ice. Without any further falls, we managed the many deep-water pools as well. Many trucks were not so lucky and ended up staying longer than anticipated. 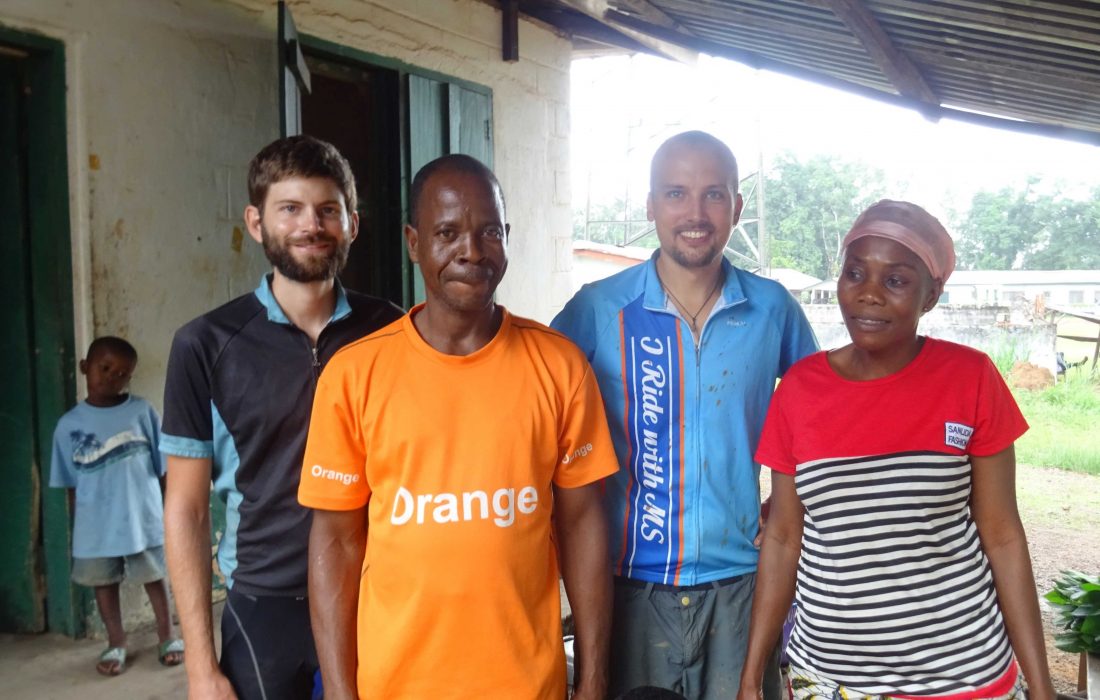 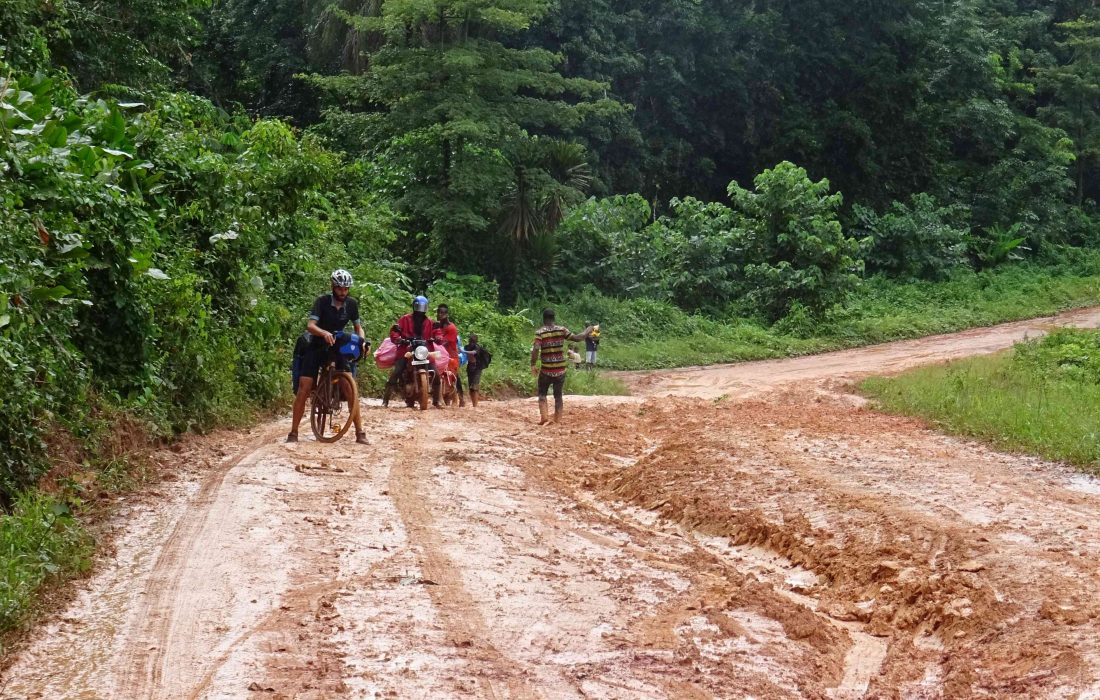 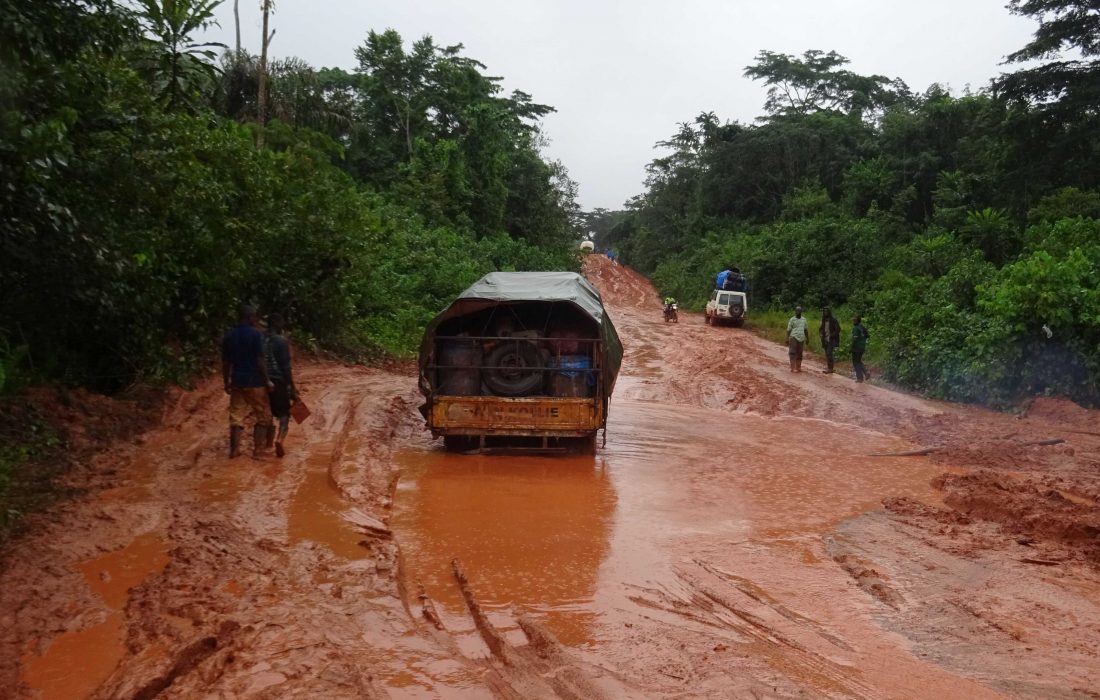 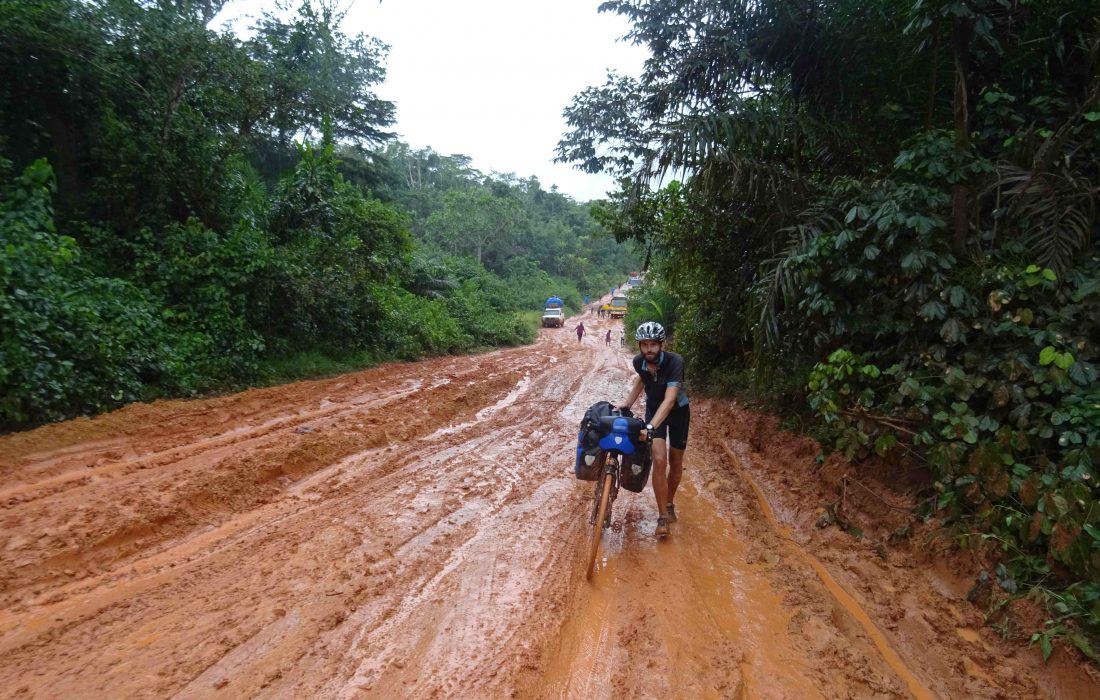 For breakfast, we found the same dish as we had already for dinner last night. The only small difference was that this time there was meat from an unidentifiable animal from the bush. After we asked a couple of times, we found out that it was probably a yellowback duiker. In any case, it gave the meal a sweet taste.

With small motivation we put on the soaking wet and mud covered shoes and entered Liberia’s adventure roads again. We thought that after yesterday we experienced the worst, but Africa disabused us quickly. We did not come far until we saw another truck that was stuck in the middle of a hill and strong, half-naked guys with sweaty bodies tried to dig out the vehicle with shovels and pickaxes. Many villagers watched the spectacle and tried to maneuver the other vehicles around the part containing sections with knee-deep mud. We pushed our bicycles down the hill and had to remove part of the dirt, before it was possible to continue.

Many cars, trucks and busses, which we overtook along the way, we never saw again. The people who want to travel to the remote areas in the rainy season need to have a lot of patience. Certain waterholes were so deep that we were as deep as our shin when cycling through. 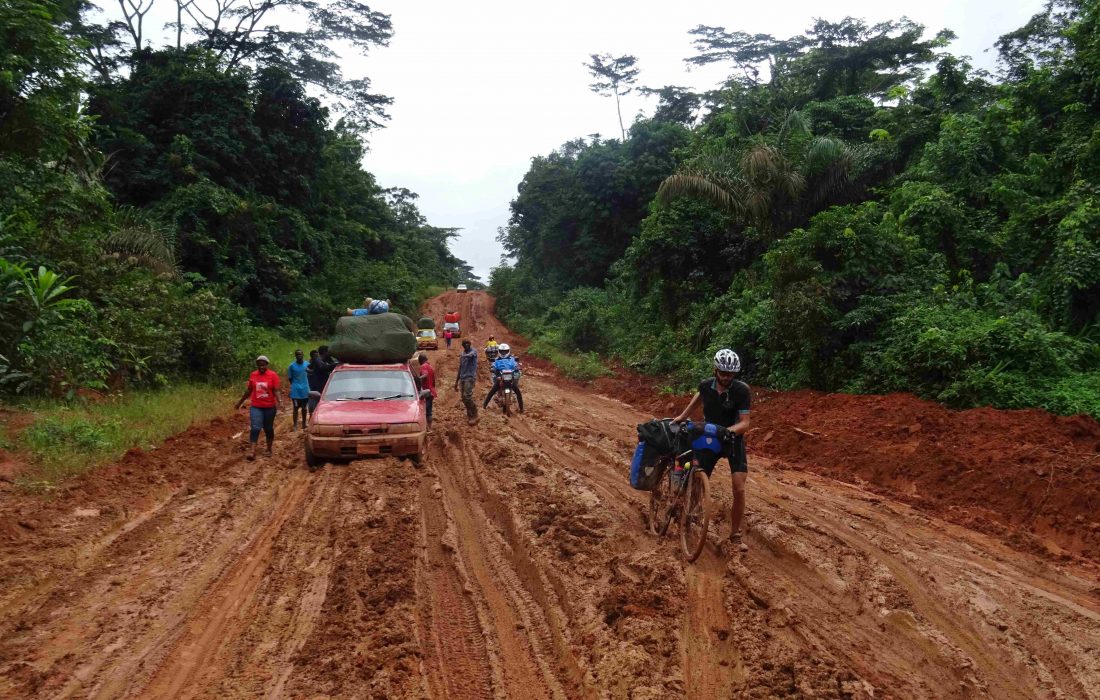 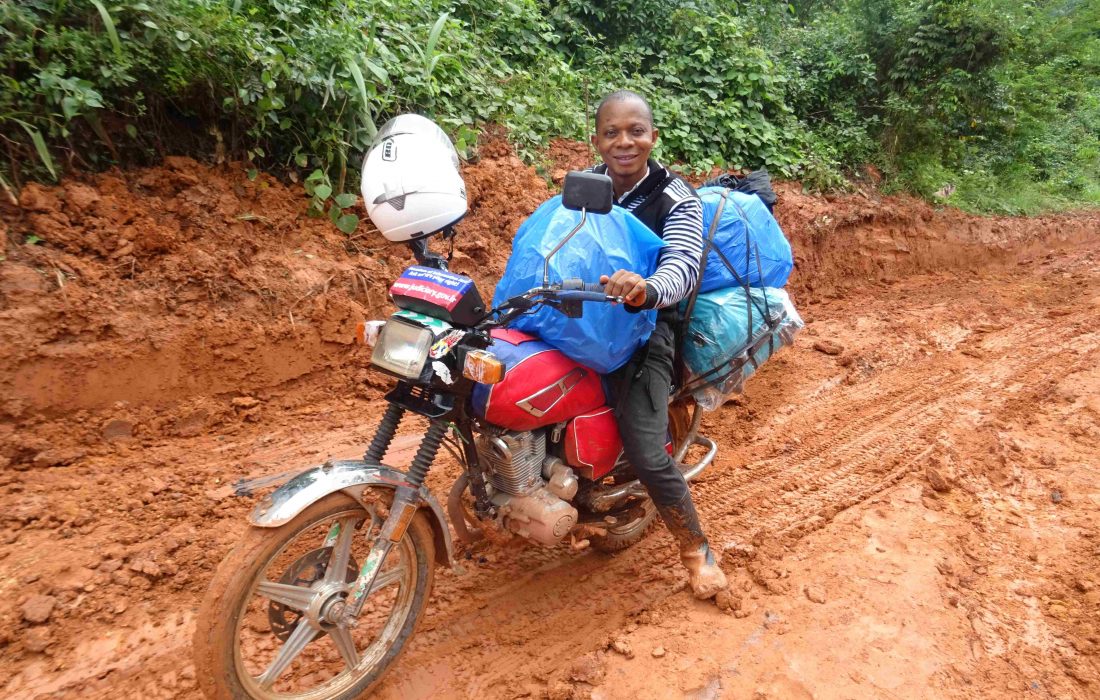 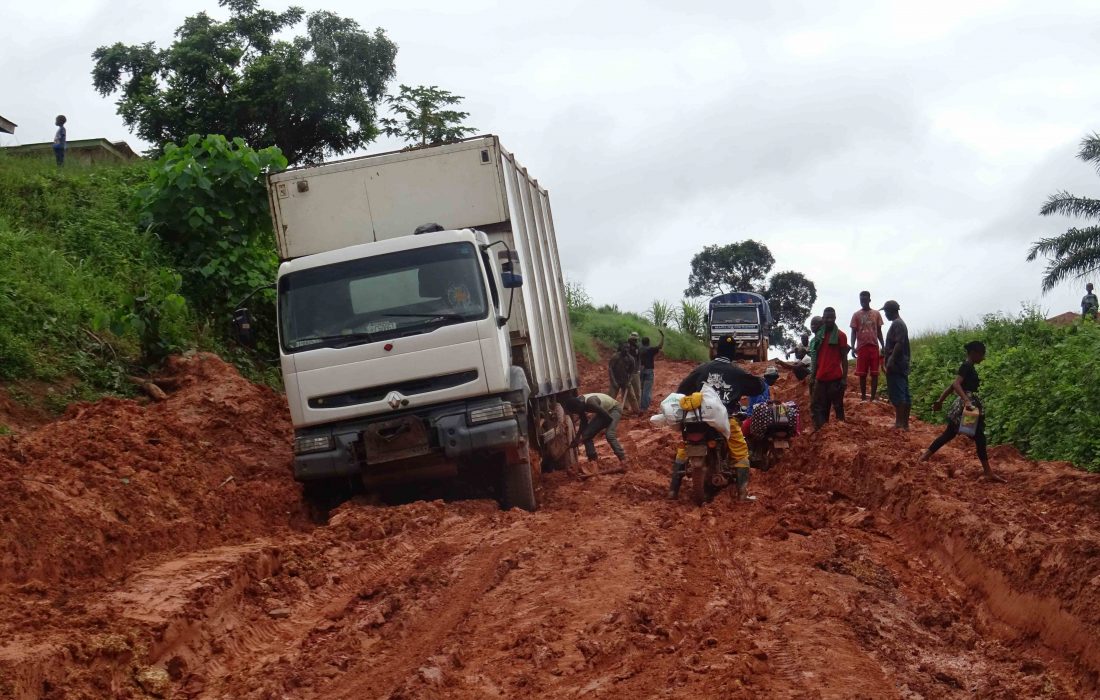 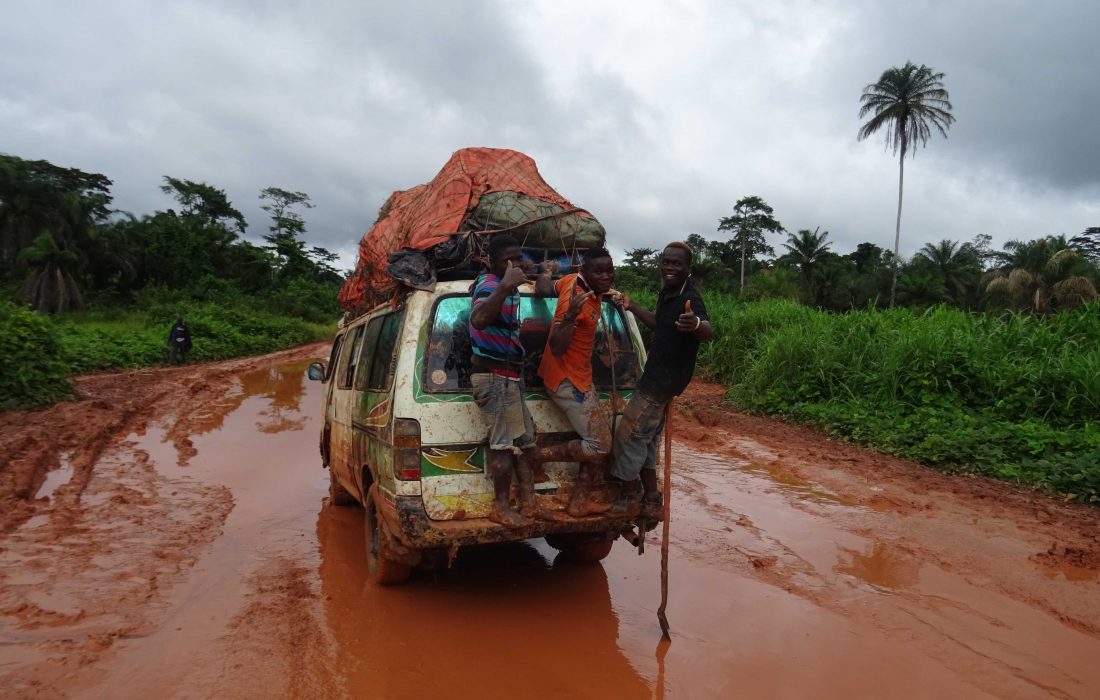 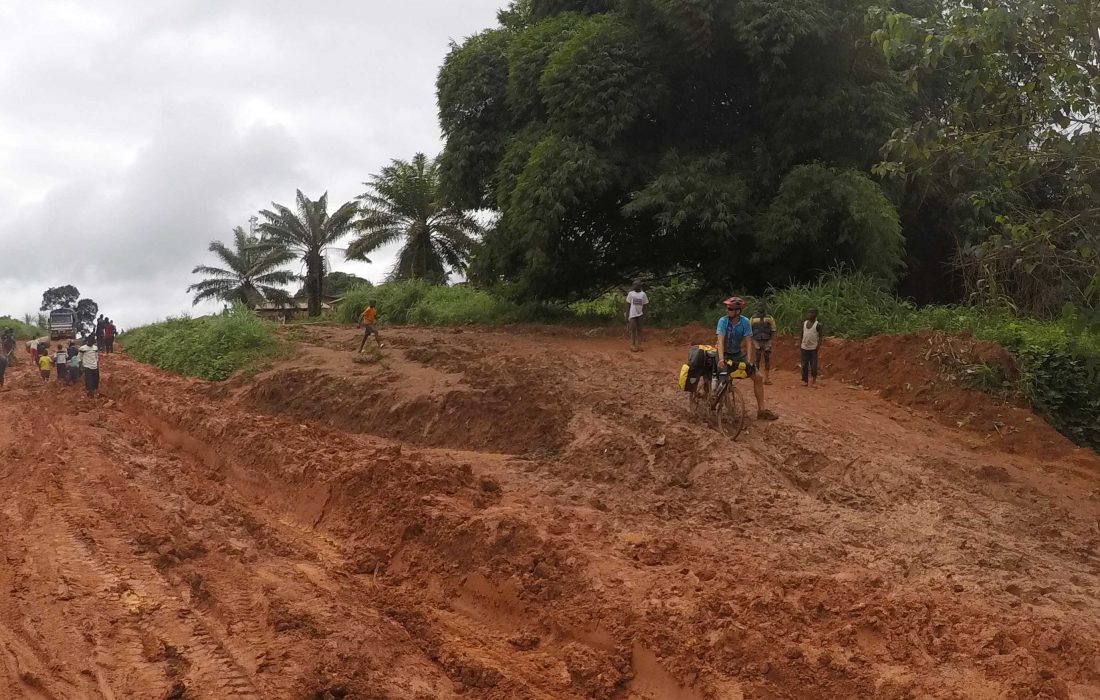 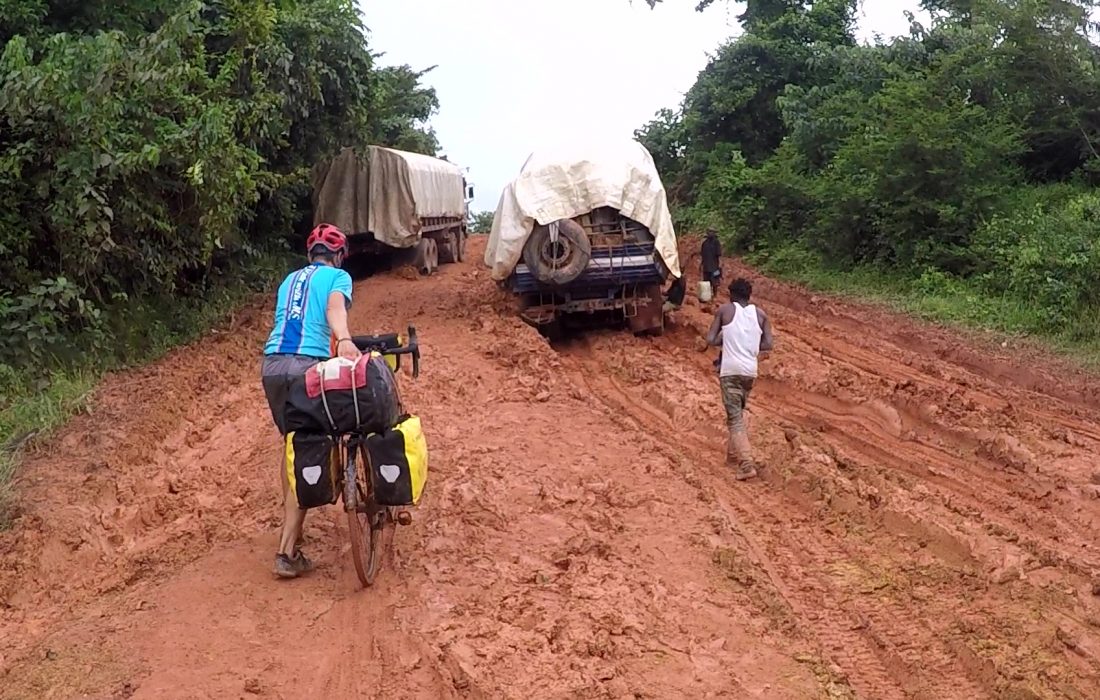