Unfortunately, we realized only after we picked up the residence certificate that the signature of the commandant was missing on Adrian’s document. Therefore, Adrian went to the police station again, to get the signature. Sadly, the chief was even after two hours waiting time not around, so he left his phone number and went home. In the next morning, before we said goodbye to the cute family of Noah, Adrian did his bonus round of 15 km to the station and got his signature.

We took some pictures in front of the restaurant and said thank you for the awesome hospitality. A road similar to a highway led us out of Lomé. Soon, the road got narrower and the first potholes appeared. In a small village, we tried our first African cow-cheese. The white, large chunk of cheese tasted extremely fresh, the flavor was rather boring though. 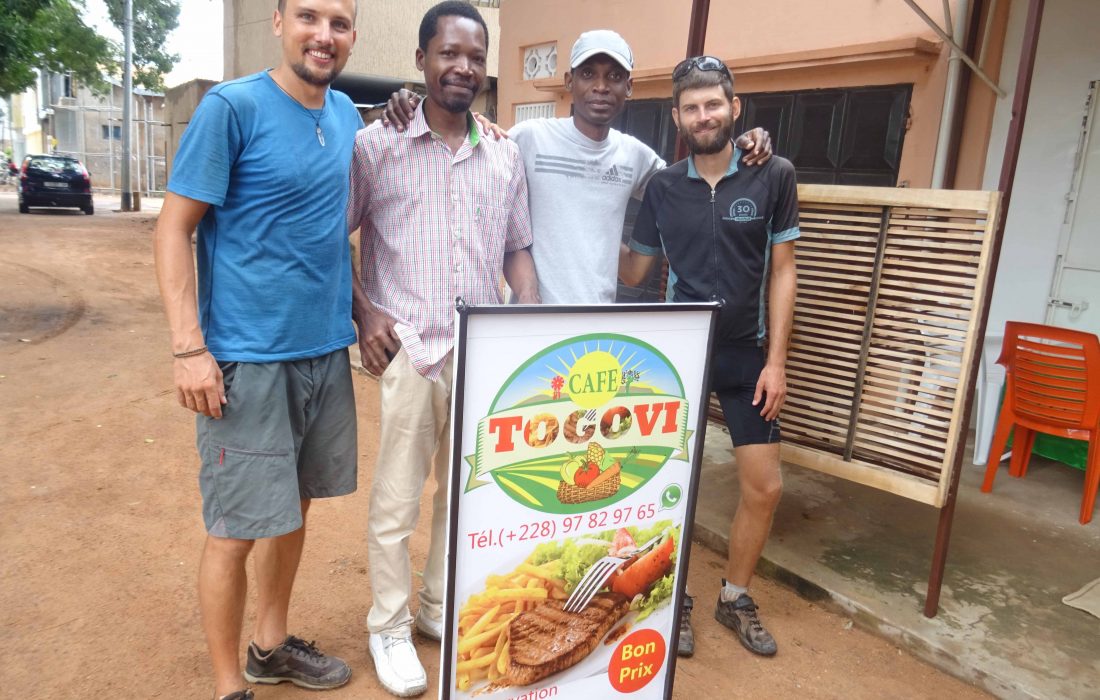 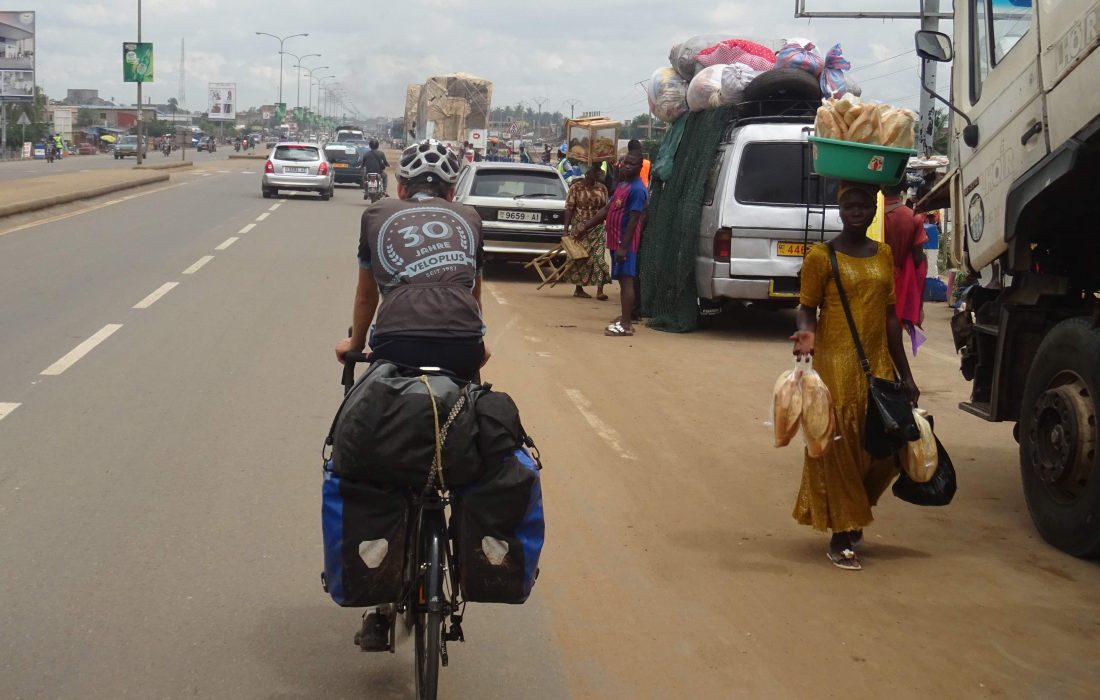 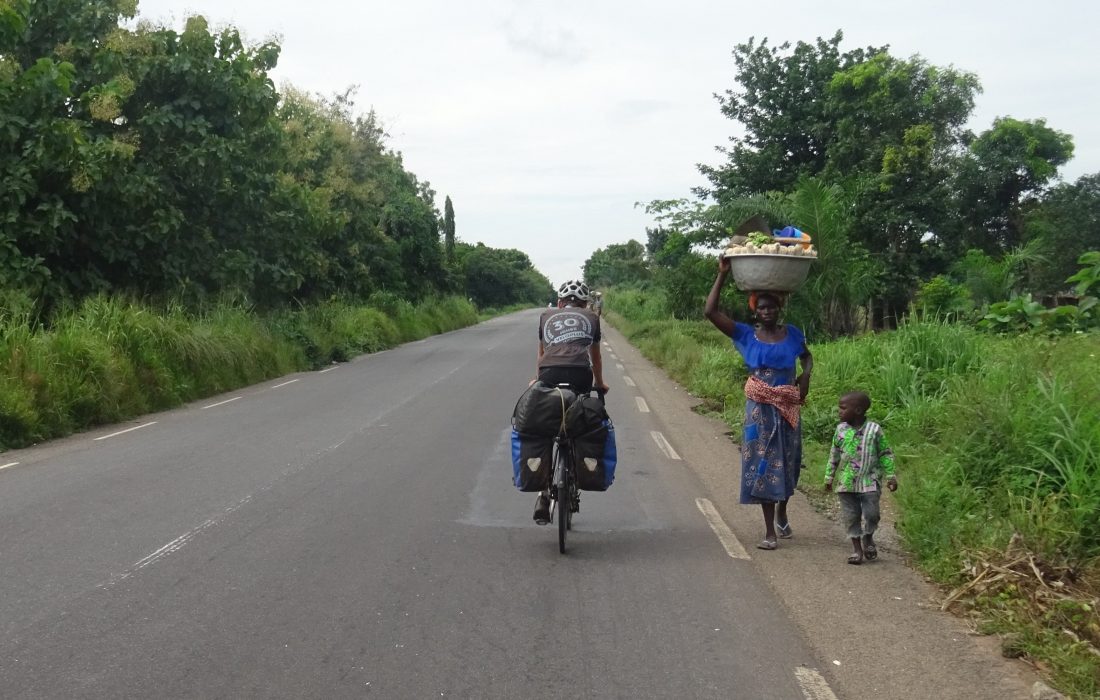 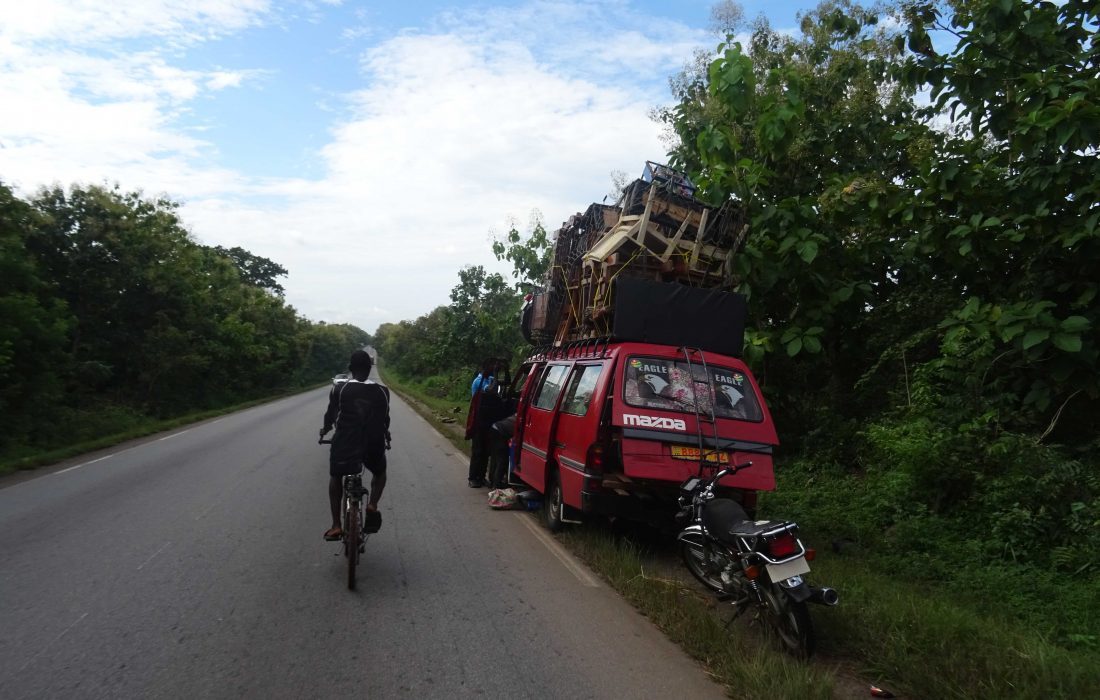 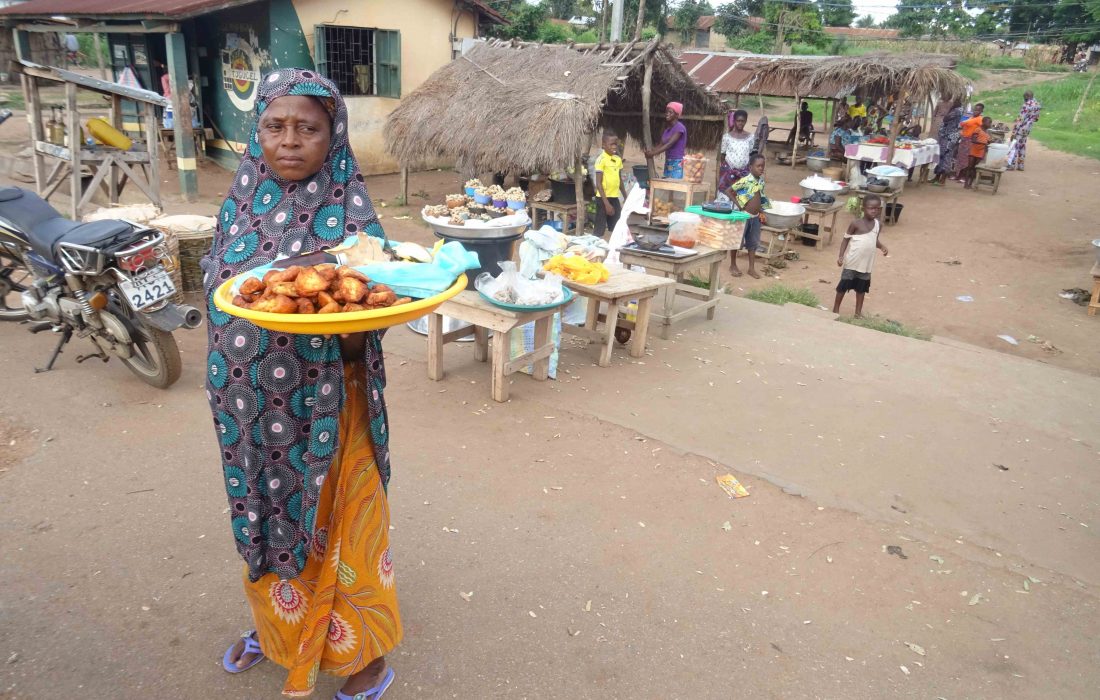 Our plan is to cycle northwards from Lomé, to cross the border into Benin. This is certainly not the direct route, but that is not why we do this journey. The high humidity due to the regular rain, made us sweat and the clothes did not dry at all.

Already from far away, we saw many people looking from a narrow bridge into the river. We assumed the worst and when we arrived there, we saw that a truck loaded with rice did not catch the turn and landed in the riverbed. Some bystanders told us that two people died in the accident. Everywhere, we saw children and teenagers, who grabbed the rice bags out of the river and proudly carried them home.

Behind a high school, we found a nice spot for our tent under some mango trees. When we installed the tent, we met the German teacher who was interested about our trip and asked a couple of questions in proper German. He told us that there are 80 kids in one class. To the question if the teachers beat the children, he said that the government officially banned it, but if they do not beat them, they do whatever they want. Understandable, since the parents beat the kids all over Africa, so if the teacher do not follow the parents lead, the conditions in the classroom would be chaotic. 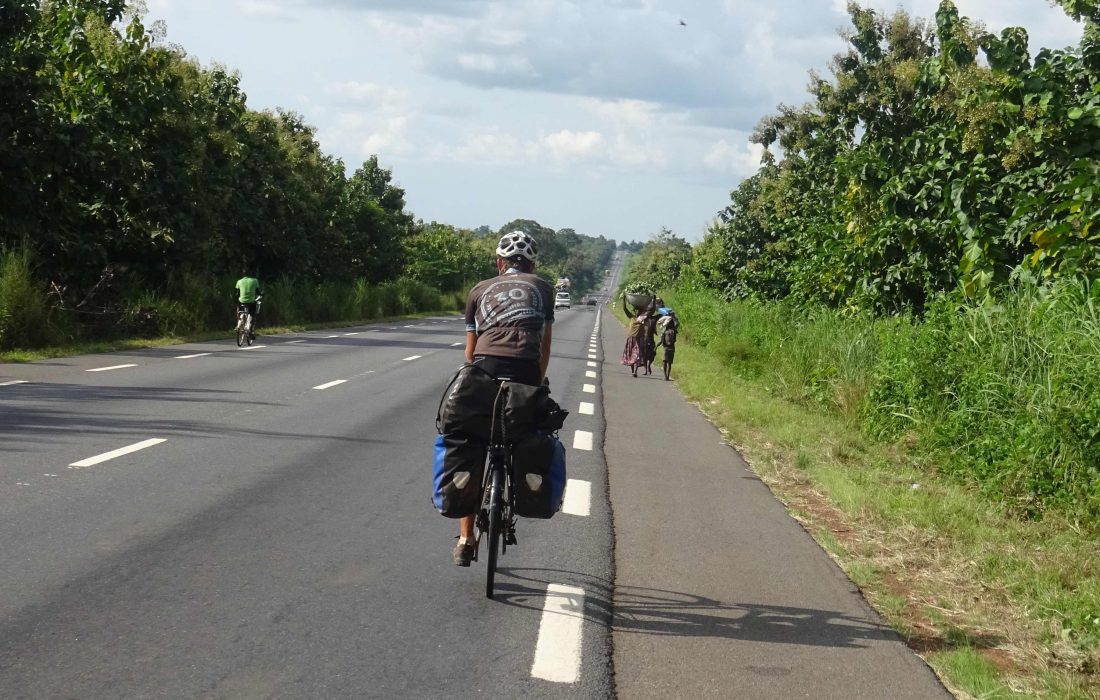 In addition, he said that he did not have a salary during the first three years as a teacher and just this year he got an official contract from the government. Unfortunately, this salary is still not enough, so he has to work as a farmer on weekends.

Since one week, the summer vacation is finished and we see hundreds of kids on their way to school wearing their cute uniforms. Most of the time, they great us in a friendly way and sometimes they sadly ask for a “cadeau”.

Everywhere, children and women spread out their harvest on the side of the road. We saw maize, chili, okra and cassava. In addition, since Ghana there are teak plantations everywhere.

The traffic on the only main road towards the north is not that bad and there are many motorbikes as everywhere in Togo. Travelers who have visited Vietnam know this phenomenon, although there are many bicycles as well, which makes us feel more welcome.

After more than 340 km in three days, we reached Sokodé, the third largest town in Togo and were exhausted. Our Couchsurfing host Tatchein met us on the main road and led us to his house. His mother insisted on us trying her food and we were very happy about that. 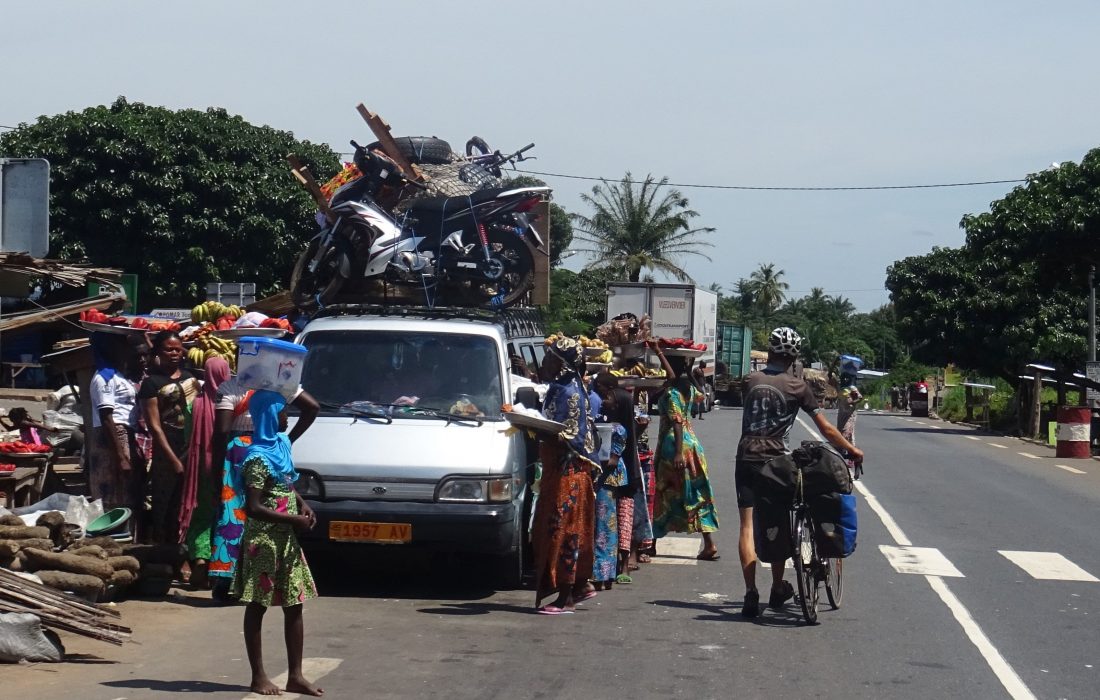 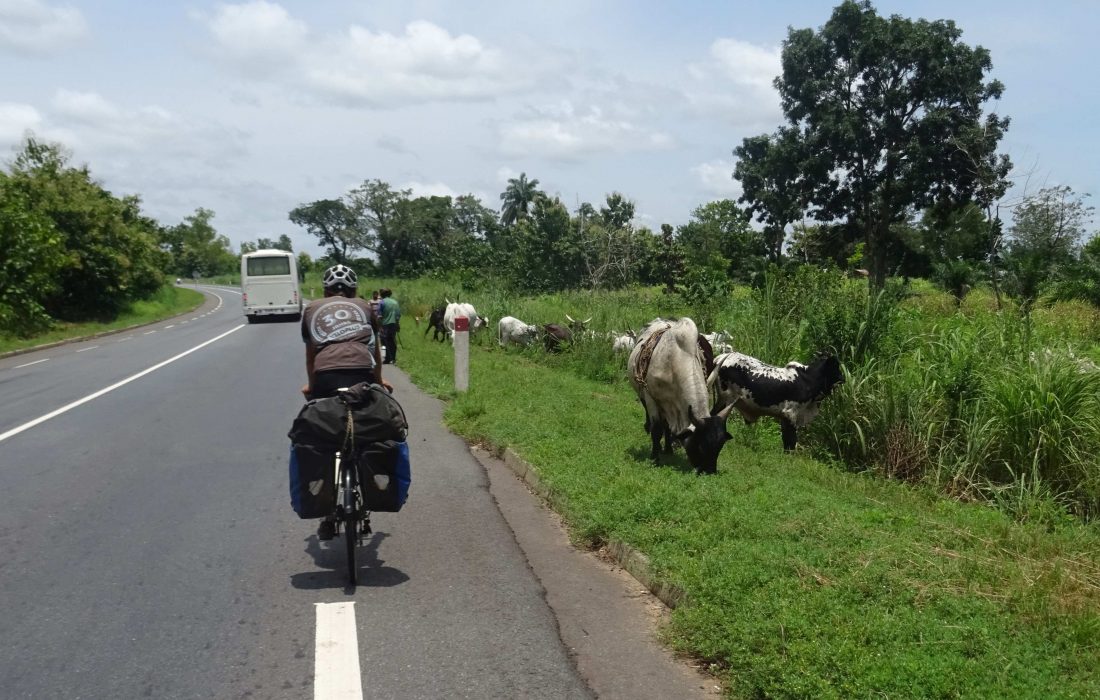 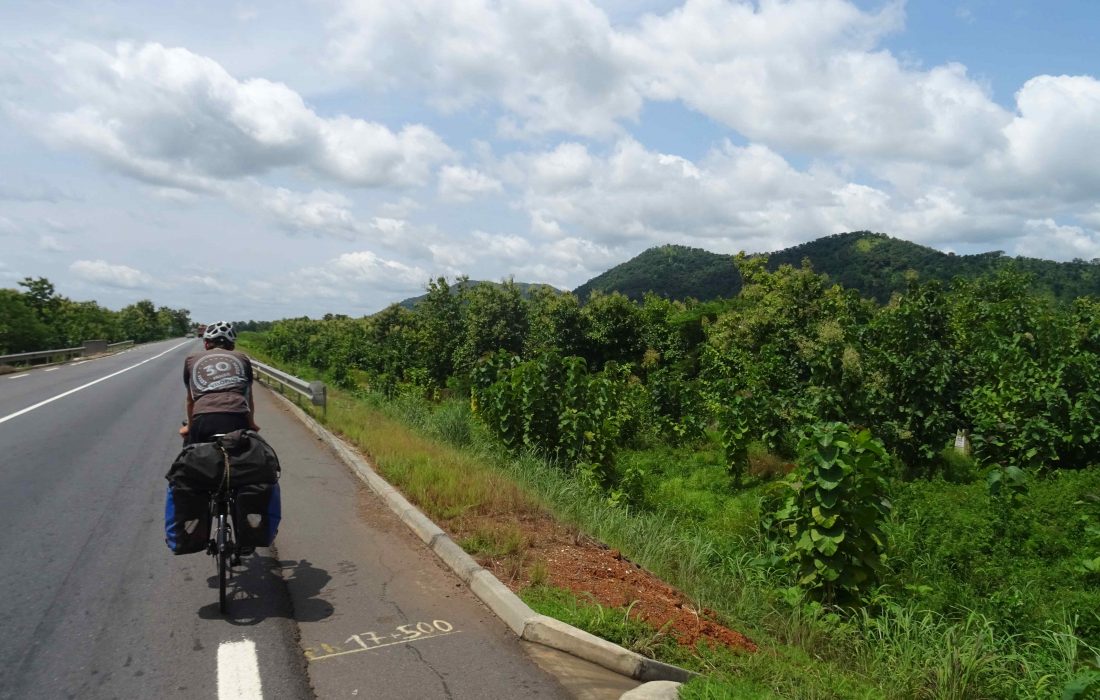 Since the Sahara, we never cycled more than 100 km in three consecutive days and therefore we rested in Sokodé a bit. Together with Tatchein, we visited the “grande marché”, ate a rice meal called “wathie” in a typical, simple restaurant. Afterwards, we walked on top of a small hill to have a nice view across the city. 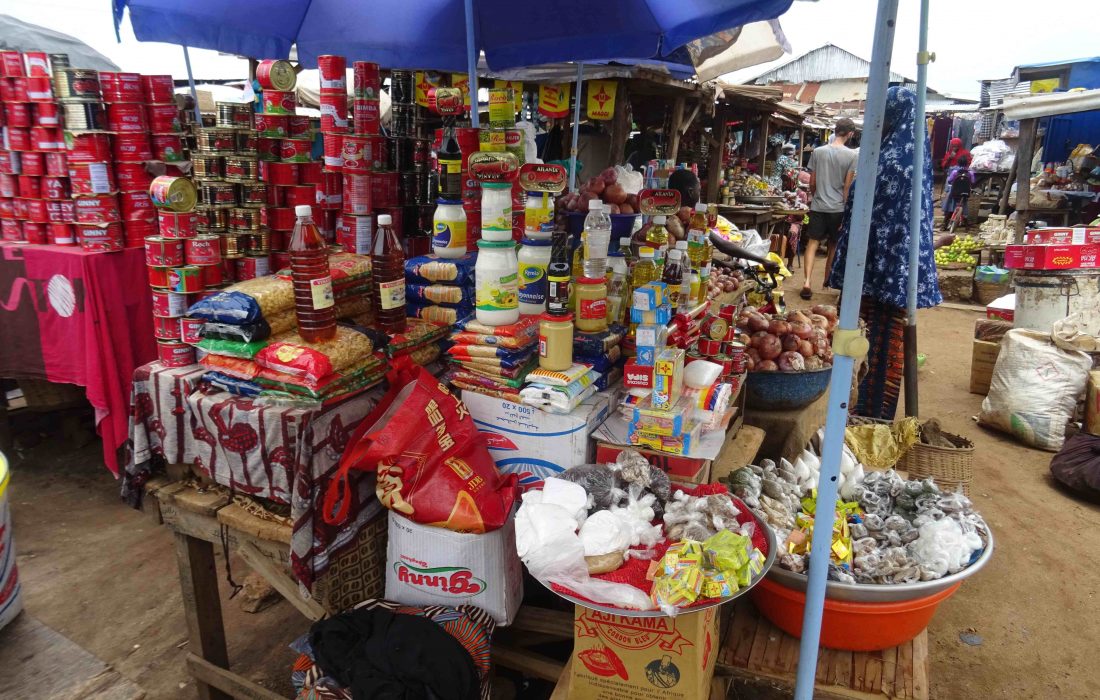 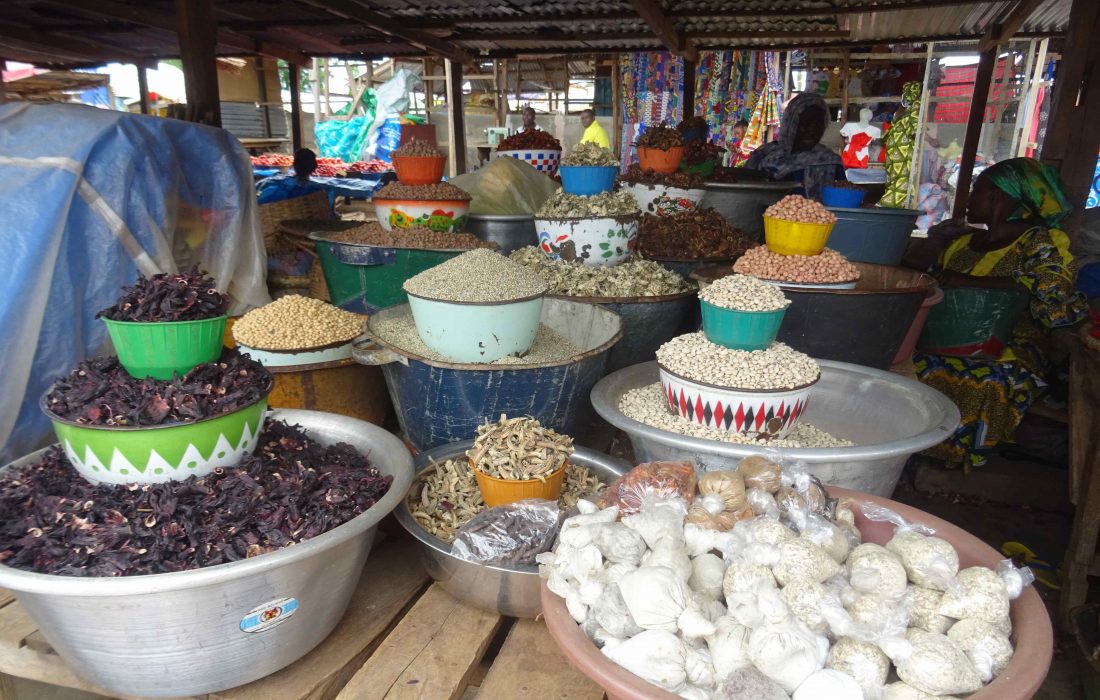 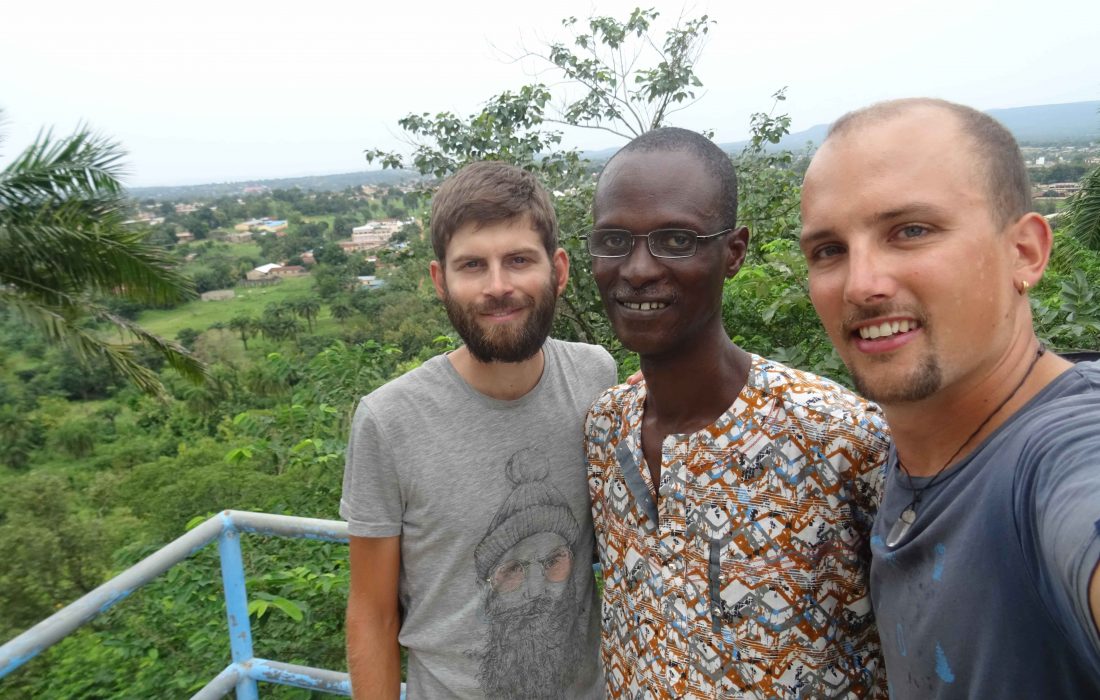 Before leaving the house including the great hospitality we had to tell the forthcoming mother of Tatchein that we decided to continue our journey. The further north we came in Togo, the friendlier and more enthusiastic is the reaction of people when they see us. The kids on their way to school scream most of the time something in our direction, greet friendly or today, we were even welcomed with applause arriving in a village. By now, it is normal to be the focus of attention, but this reaction was even extreme for us.

We cycled along a mountain pass road sideways up a slope and enjoyed the panoramic views of the surrounding peaks. Trucks on their way to Burkina Faso pass the same mountain pass and because they were overloaded and fought themselves huffing and puffing up, we could easily overtake them. After the downhill, we immediately realized that the climate got tropical and humid again and we the whole body felt sticky.

In Kara, we finally wanted to taste dog meat, since it was a specialty in Togo. Somehow, the Togolese we asked where to find a barbecue place, did not know what we were looking for. We pointed at a dog and made gestures of eating. Finally, he understood and explained us where to find dog meat. Unfortunately, the meat in the recommended market was already finished and we had to settle for the local brew called “Tchoukoutou”, which is made from fermented millet. 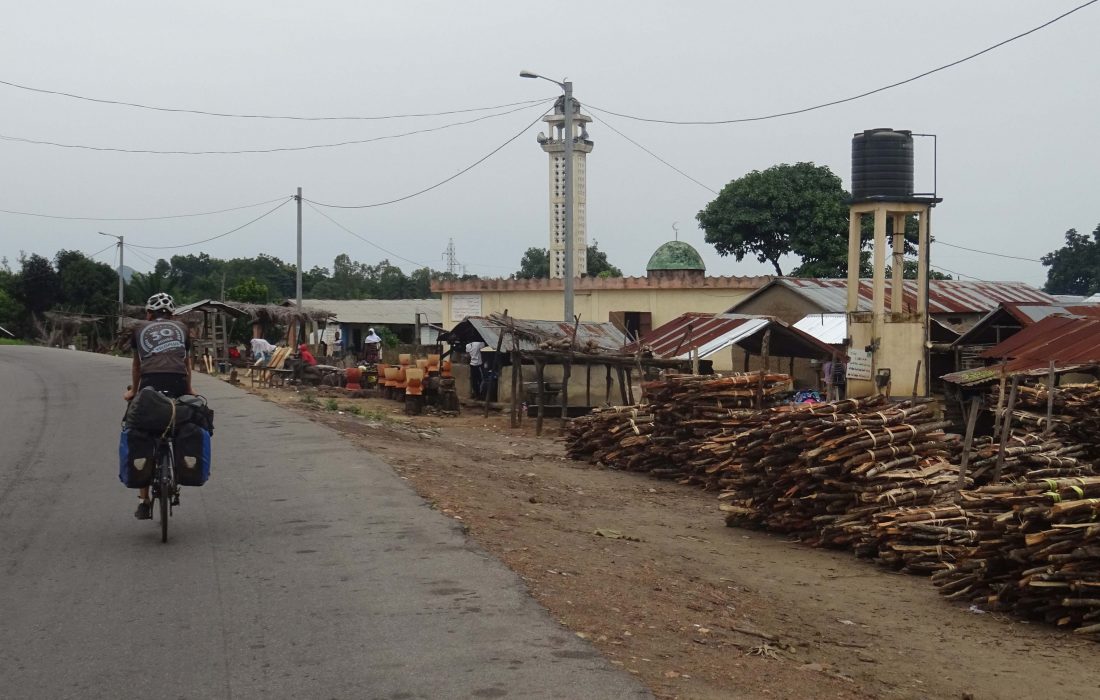 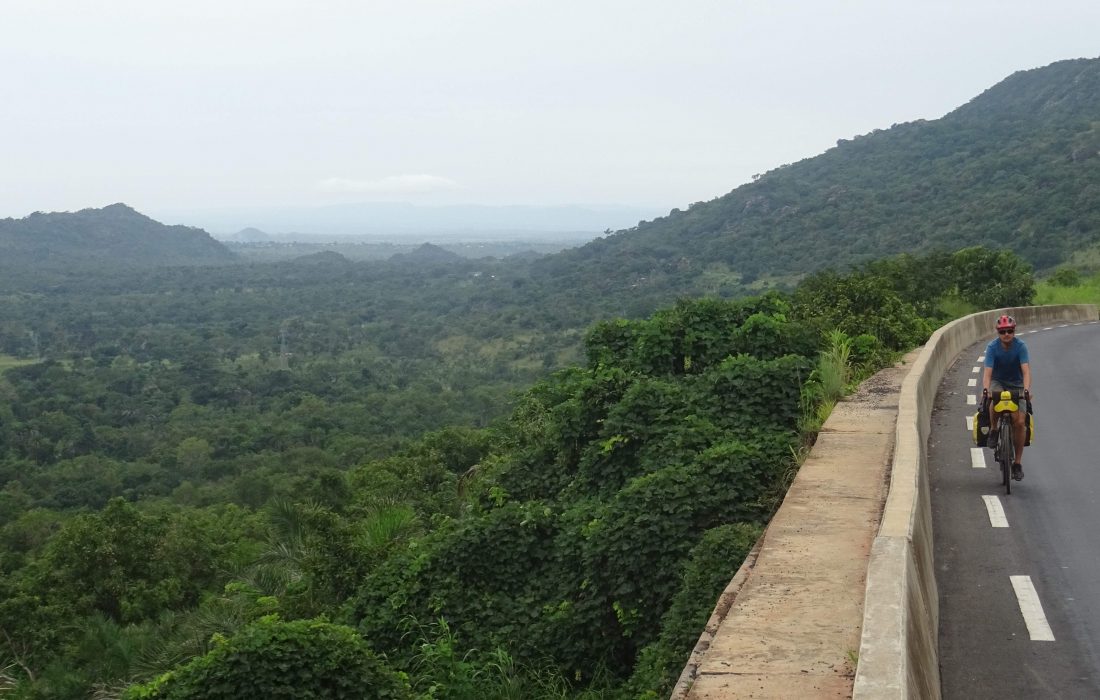 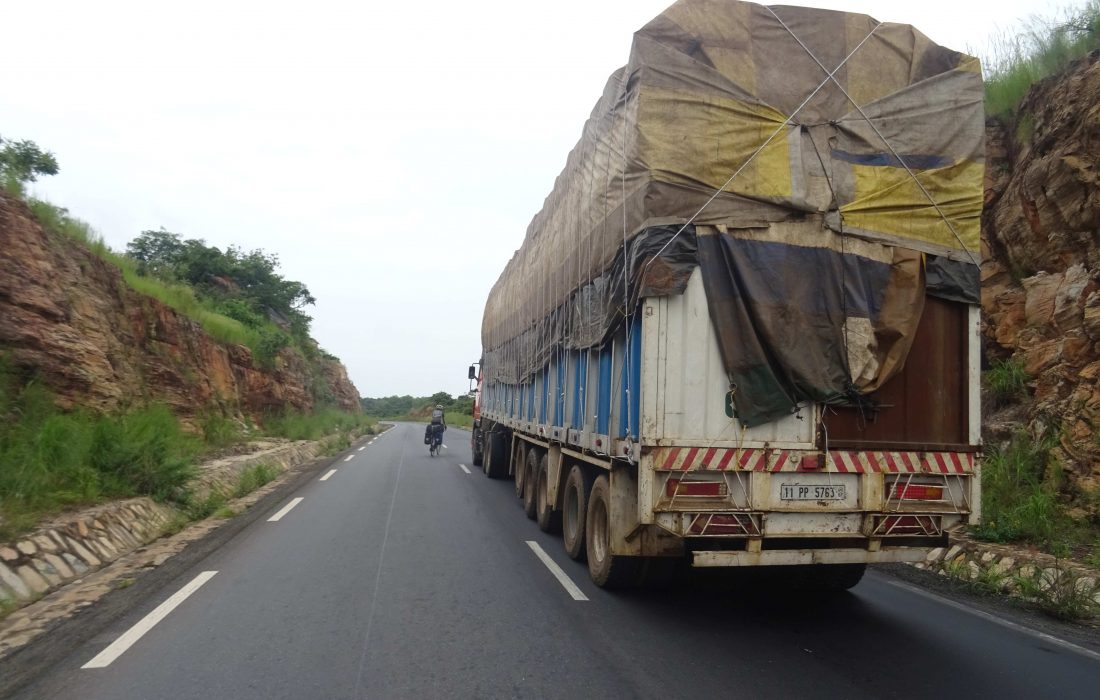 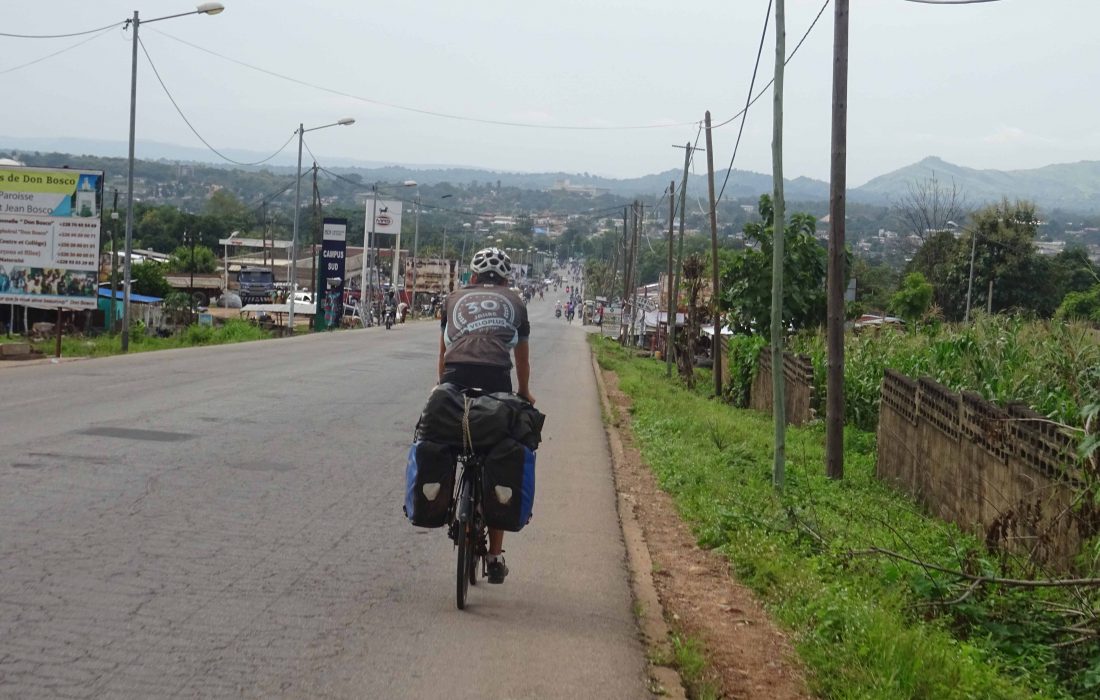 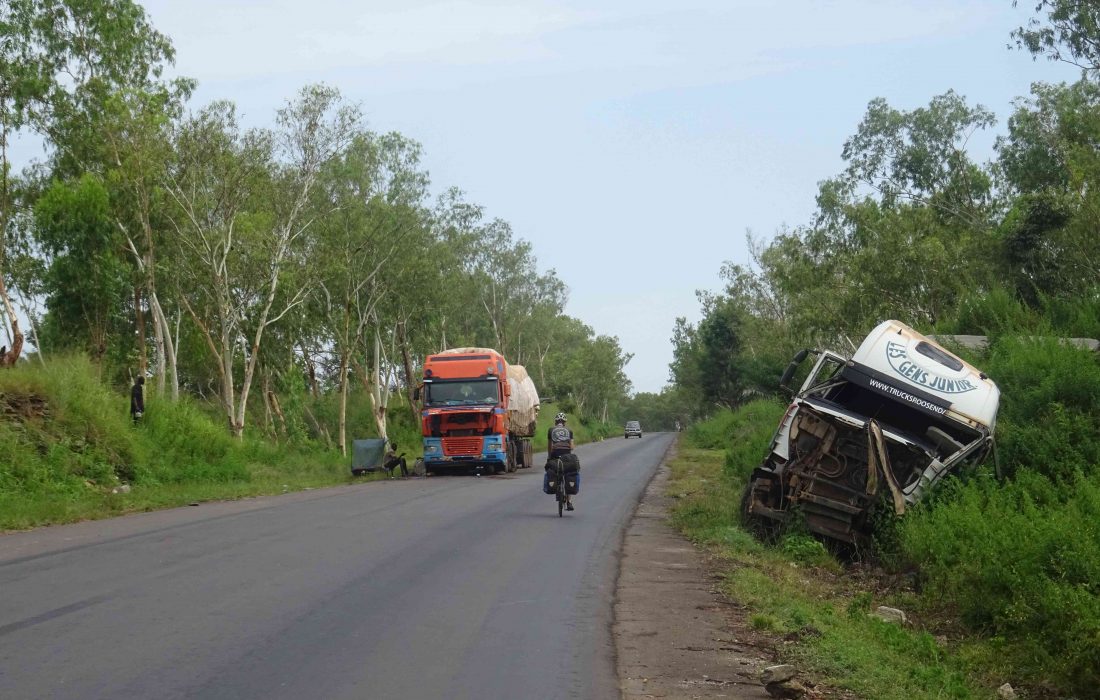 After we gained altitude for some time, we suddenly saw a road cyclist approaching us. Both parties were surprised at first and it took a while before we stopped. Karim was originally from Lomé, a member of a cycling club and complained that he was the only road cyclist in this area.

When we reached a mountain pass after another climb, the landscape changed surprisingly fast and we found ourselves in a lush overgrown steppe landscape, since it was still rainy season. Memories from our time in Senegal surfaced and we were happy about this welcome alternation.

In Kandé, we left the tarred road and cycled towards the border. This region is a UNESCO World Heritage Site and includes traditional houses, called “Tata”. Due to the horrendous prices for a visit, we decided to do it on the Beninese side, since we had some information that it would be cheaper over there. 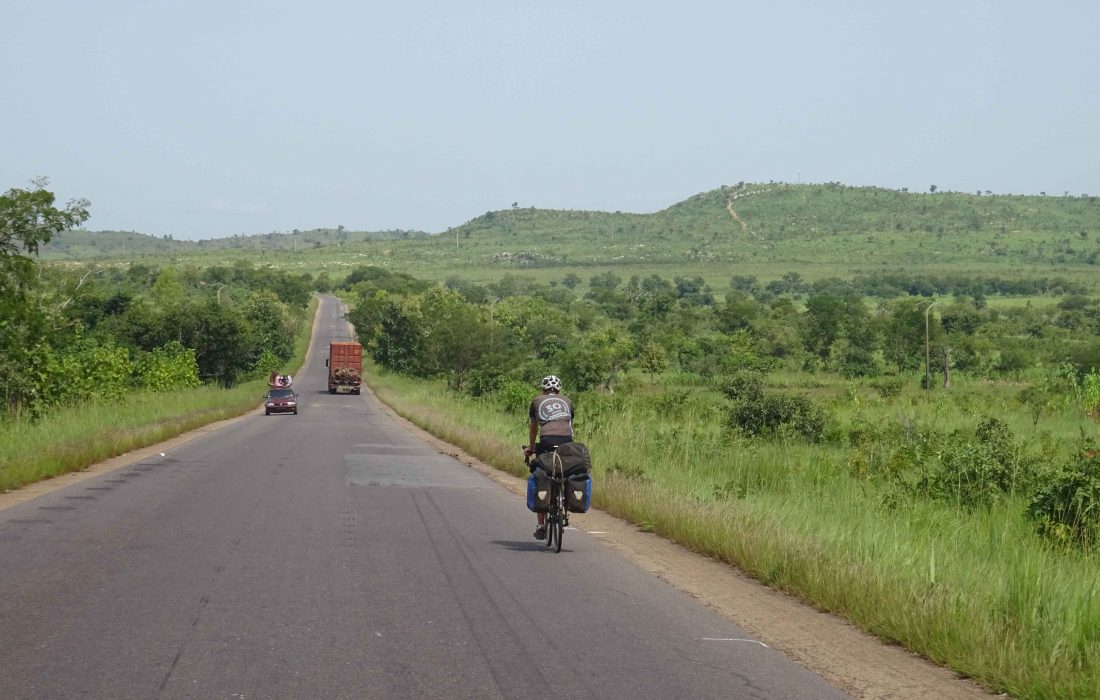 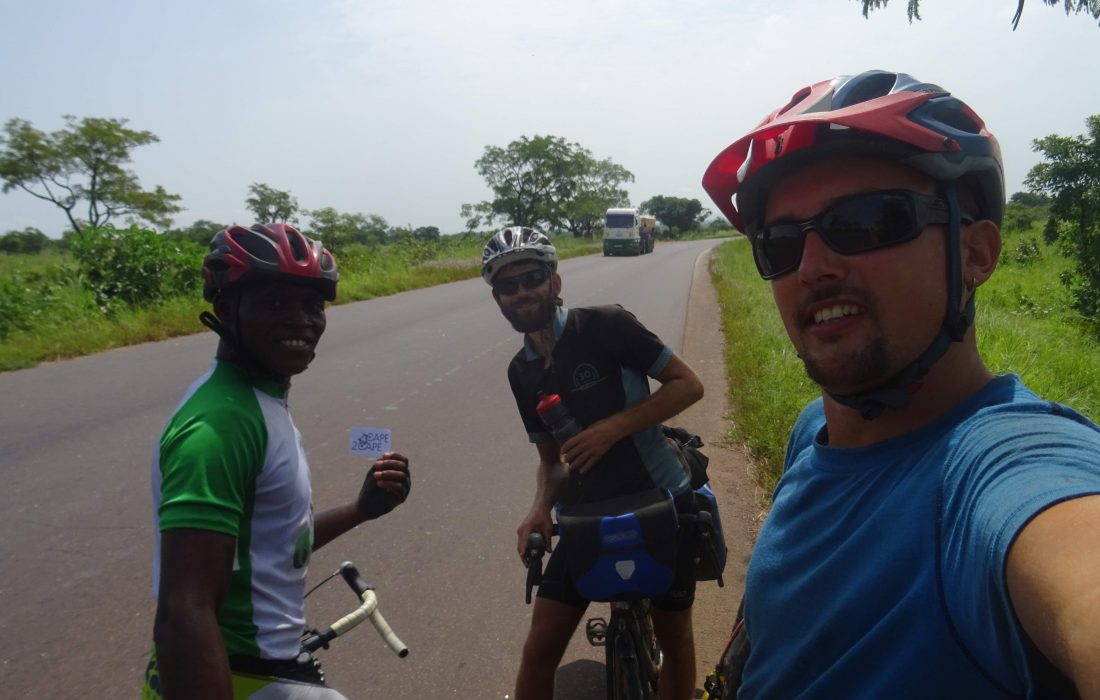 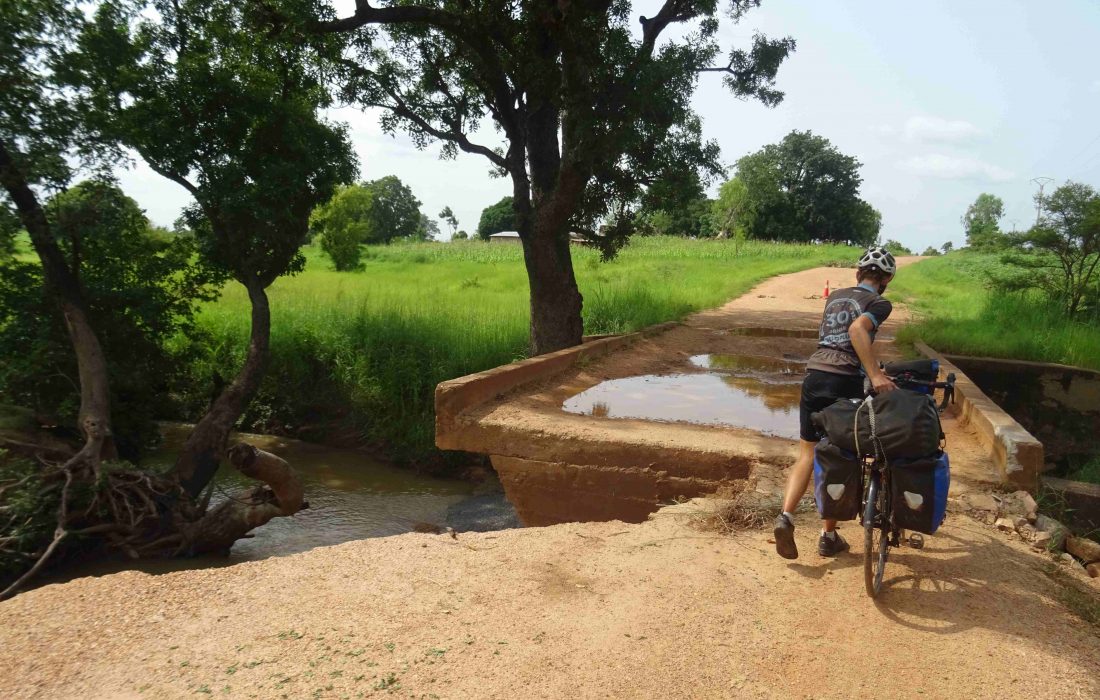 Suddenly, a 4×4 vehicle approached us with a military convoy and a white man screamed «cape2cape» out of the window. First, we were shocked and did not know how to react. When two women and Essaddi came out of the car, we realized that we were in contact via Instagram. Essaddi told us that he follows us since a couple of months and cycled through Togo himself.

In Naboda, we visited the extremely lively weekday market. We strengthened ourselves with a huge portion of rice and drank a local millet brew with a group of locals out of a bowl made out of a hollowed calabash inside a cute round hut. Afterwards, it was not far to the customs and we were already in Benin.

With Togo, we left a country with extremely friendly inhabitants, who always welcomed us with “bon arrive” and asked surprised where we come from. For the first time since months, we crossed a country without enjoying a warm shower and no white hosts accommodated us. Therefore, Togo is truly a place TO-GO. 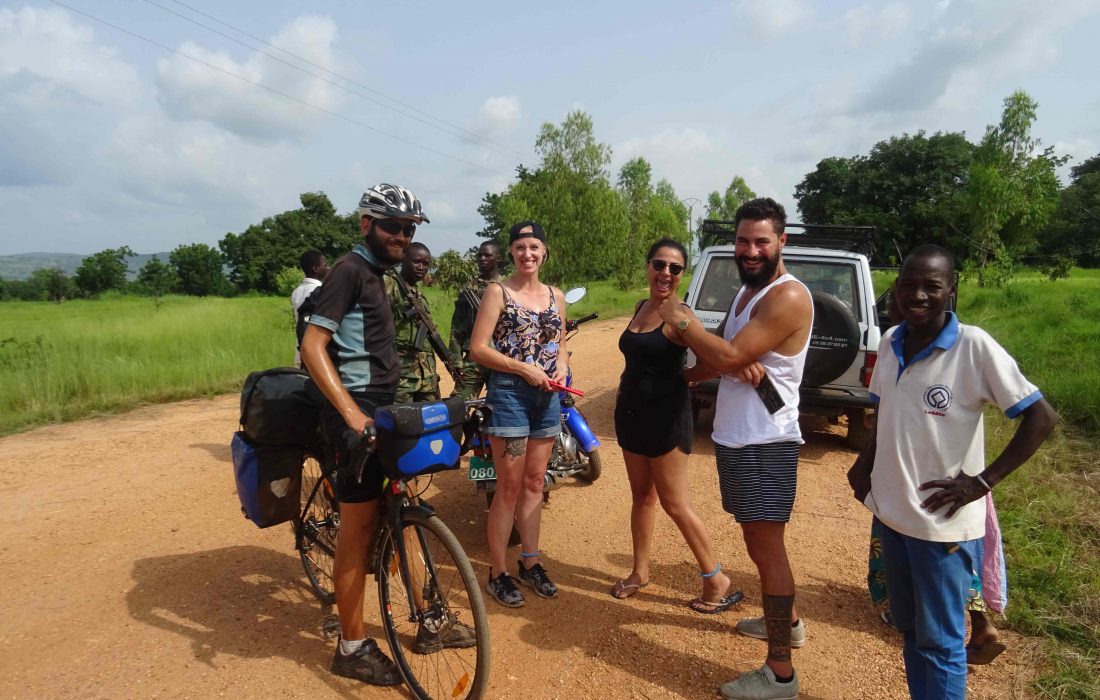 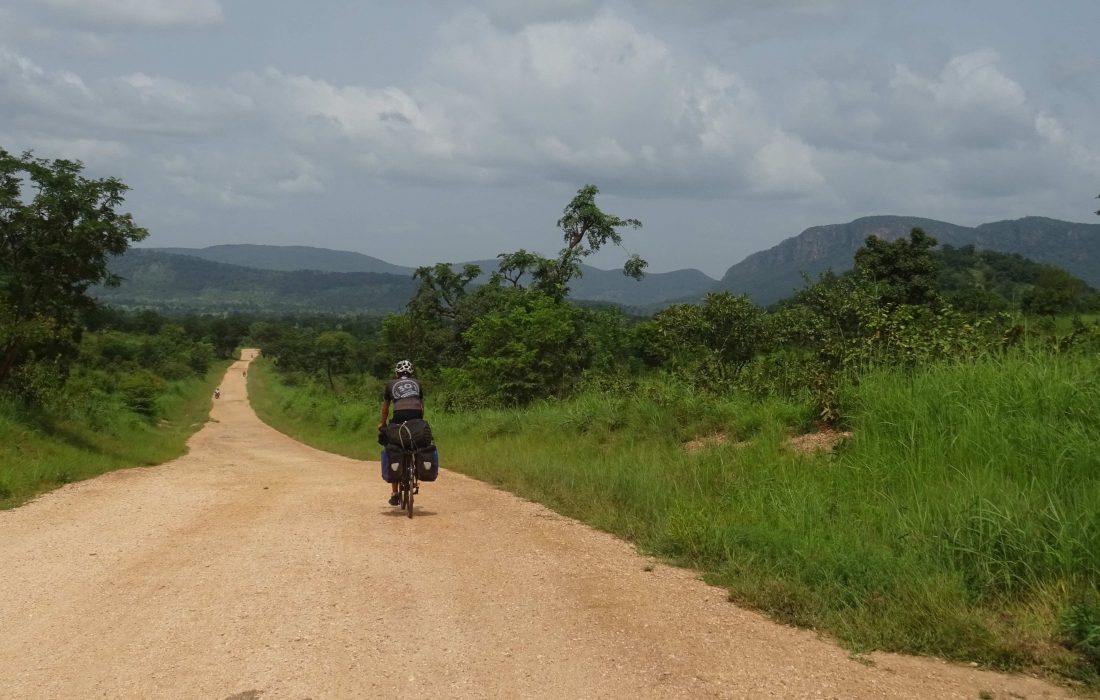 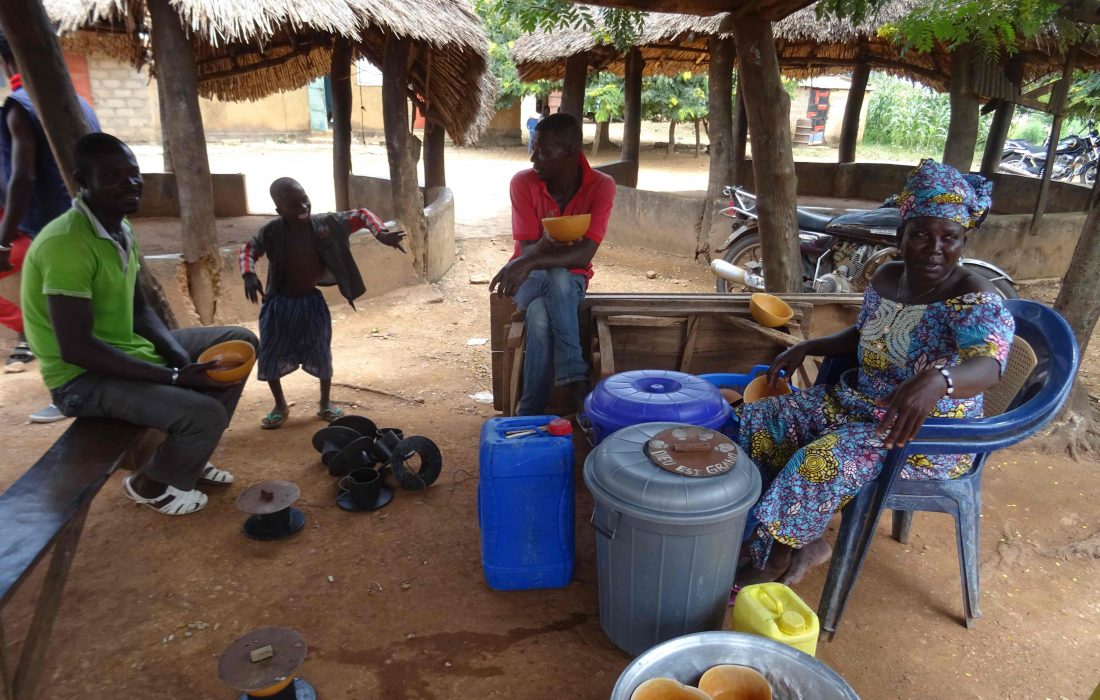