Unfortunately, two days ago, Nico got Malaria as well. Therefore, we decided to continue without him. We said goodbye to Nico and as well to our awesome and energetic host John. The family where we spend some time at the day of our arrival and where we bought our food during the last few days, we said goodbye before we really started. The woman works tireless seven days a week from 7 AM to 11PM in her shop. Her kids are, except they visit school, always with her.

Yesterday, we wanted to continue cycling, but due to the heavy rain in the morning, we stayed another night. After two kilometers, Fabian realized that he has a flat tire and we stopped next to a shelter. Just after we stopped, it started to rain heavily and we actually wanted to wait a bit longer than the repairs.

The rain almost stopped and we tried our luck again. Like this, we stopped repeatedly for the next 5km and made no progress. The last stop was unknowingly at a shop, where they filled the plastic bags with water and sold them. The friendly Nigerian owner showed us around the production site. Finally, we know how these absurd plastic bags filled with water are produced. At 3PM, we decided to put on our rain jacket and continue despite the rain. Accompanied by heavy rain and soaked in a few minutes, we cycled along flooded roads and observed how streams with lots of water transported rocks and trash onto the road. Luckily, the rain stopped and in the evening, we could stay in an empty house of a family, after we asked the village chef for allowance. 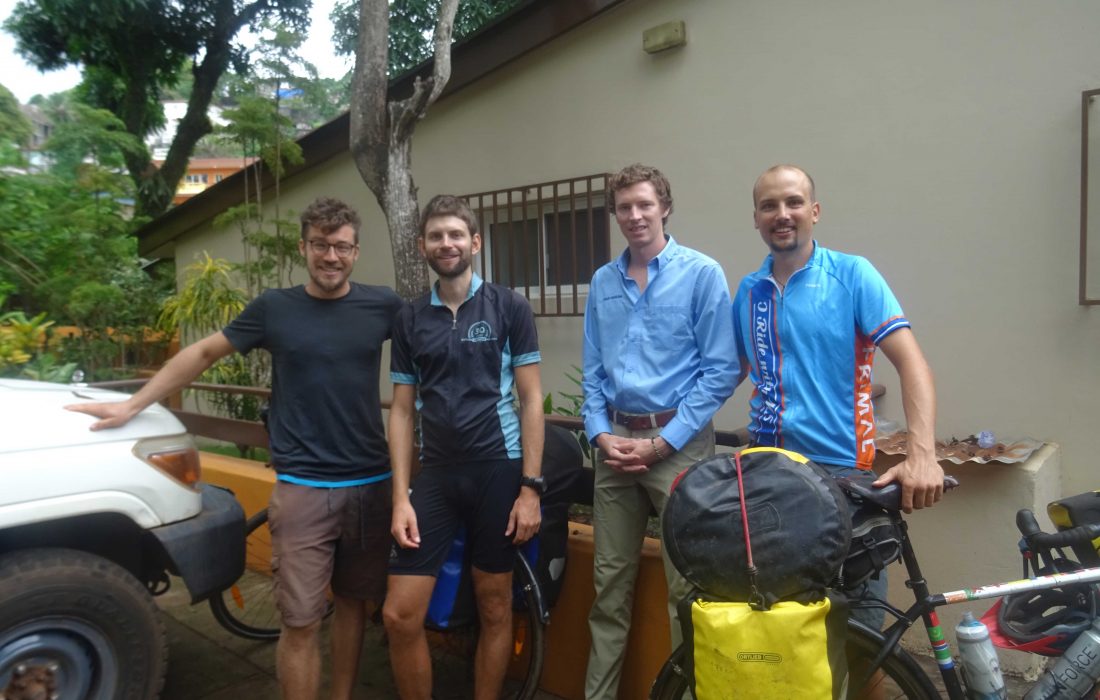 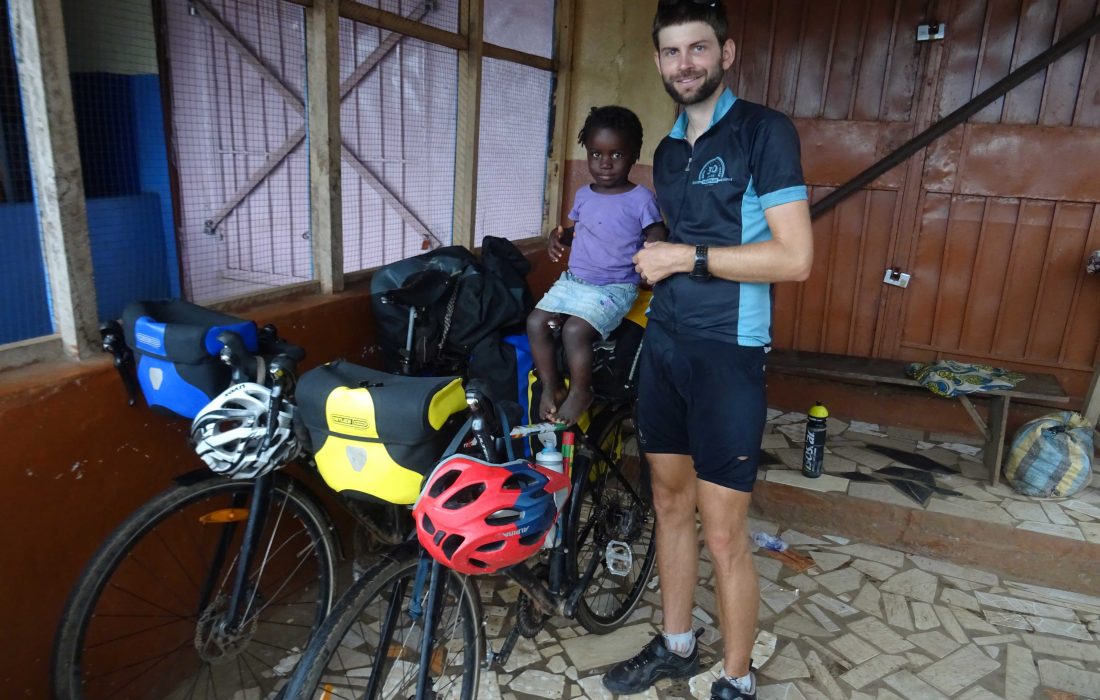 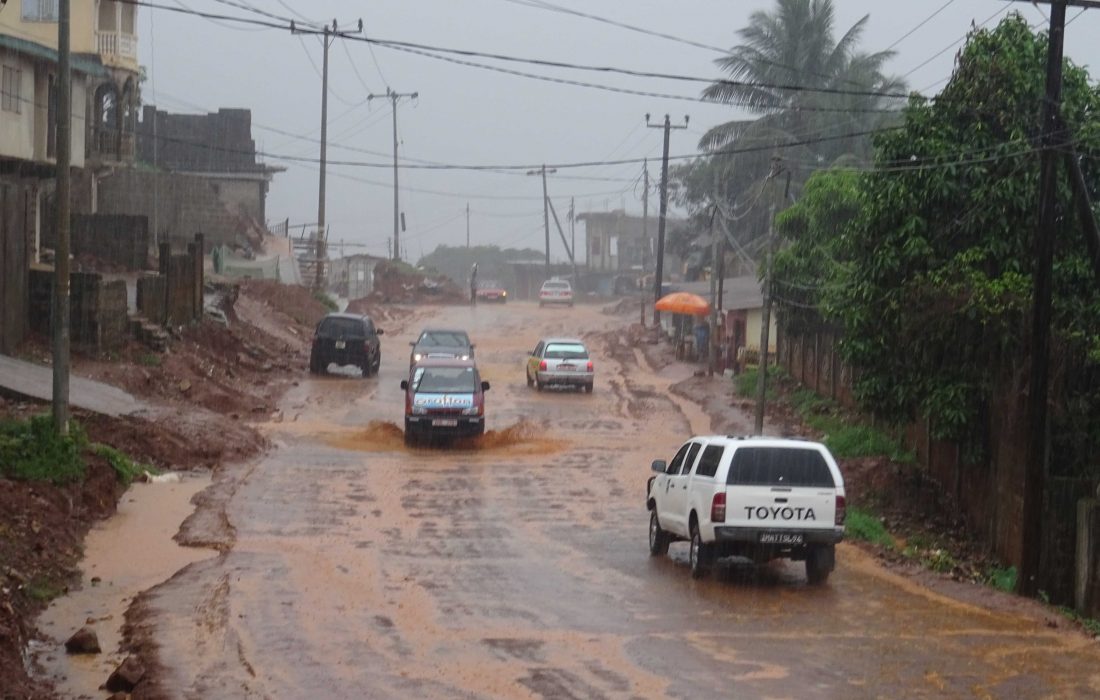 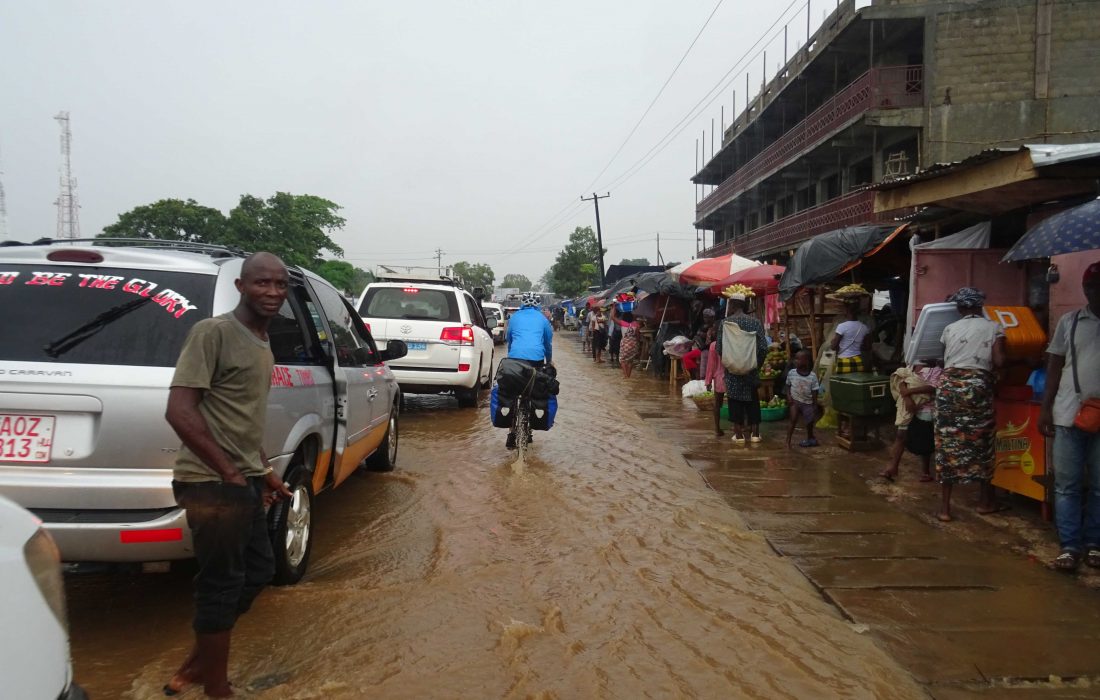 The sun was out most of the day and we could even dry our shoes during the breaks. Unfortunately, we neglected the sun protection and had burned arms and faces in the evening, since we did not expose our bodies to the sun since many days.

We cycled on the perfect tarmac road passing small villages, where children and even women screamed “Apoto” (white man) and danced around. We have to get used to this again after more than a week in the big city. In Mile 91, we refueled our bodies and talked to a 10 years old boy, who was leading the small restaurant when his mother is not there. Unbelievable what kind of responsibility kids in Africa undertake and how mature they appear.

In the evening, more than a dozen of villagers observed us, while we pitched the inner tent in one of the empty buildings. Sometimes, it feels like they are watching at us as if we would appear in a TV show. 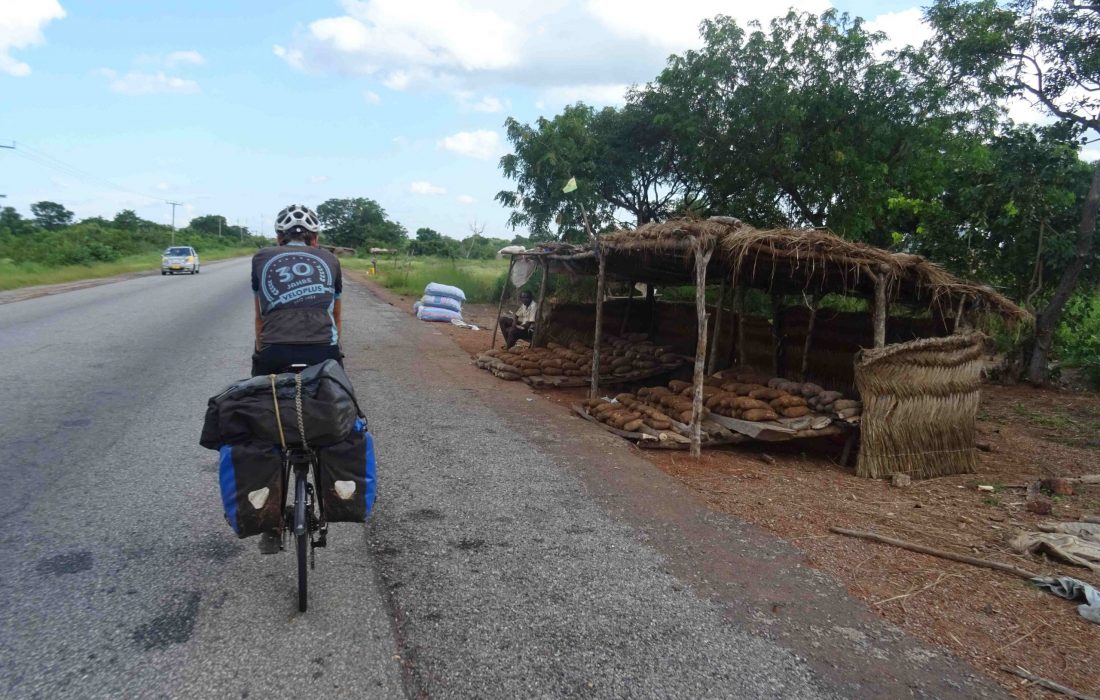 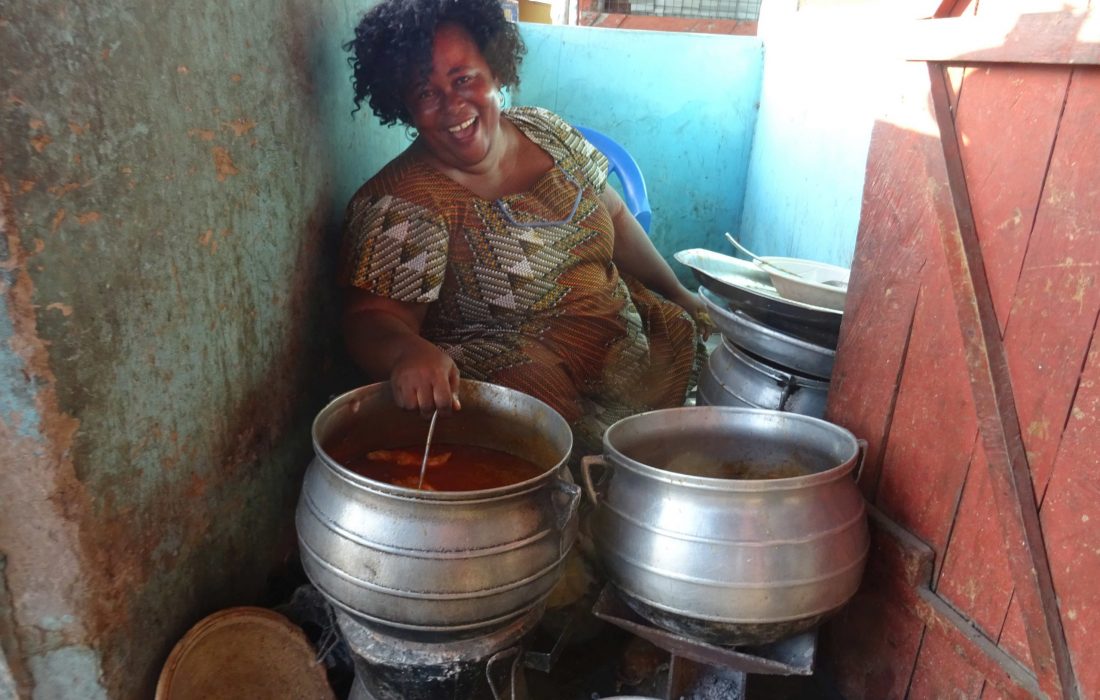 At 7 AM, our new friends visited our room where we stayed and asked if we slept well. Of course, we were still sleeping and after a couple of minutes, they left and then came back with all the children an hour later. Until our departure, the children and teenagers did not leave us alone, since it was special for the villagers to see what we were doing.

We cycled past many villages, where people greeted us friendly and dried their clothes on bamboo rods. From time to time, we filled our water bottles, as usual from one of the many wells. Since Dakar, we carried a qualitatively sophisticated water filter, but never used it so far.

Only few cars use the main road and in many, we saw white people sitting in the passenger seat. Those are not tourists, but rather employees of one of the many represented non-governmental organizations (NGO) like United Nations (UN) or projects of the European Union (EU). For instance, they built wells, schools and hospitals to improve the quality of living for the poor population. 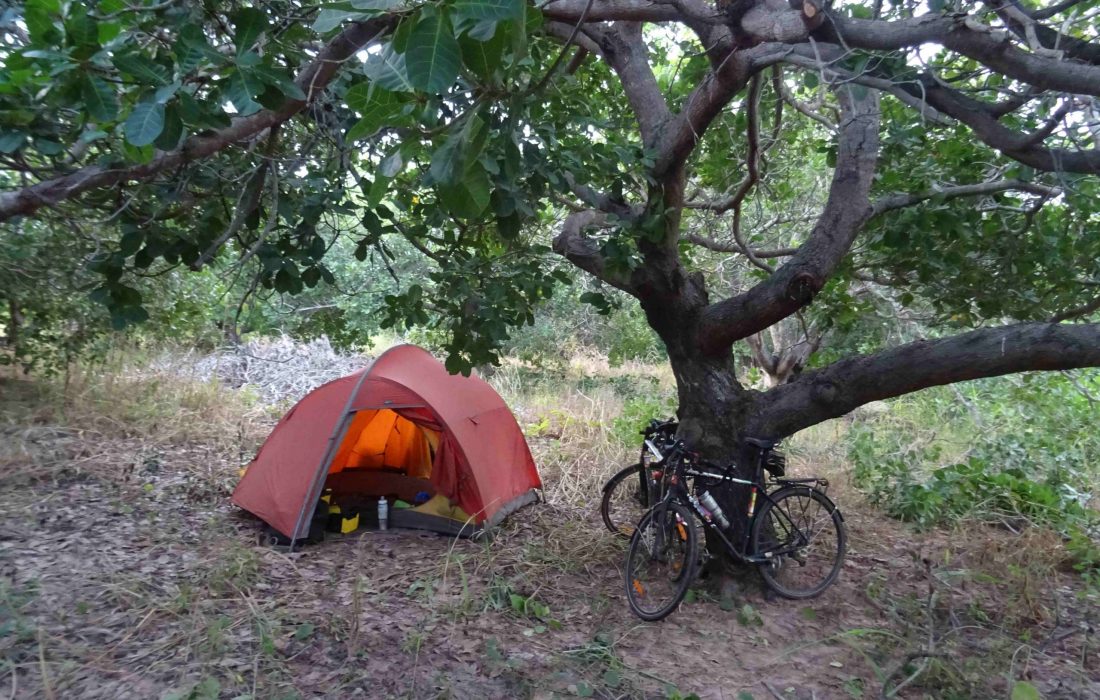 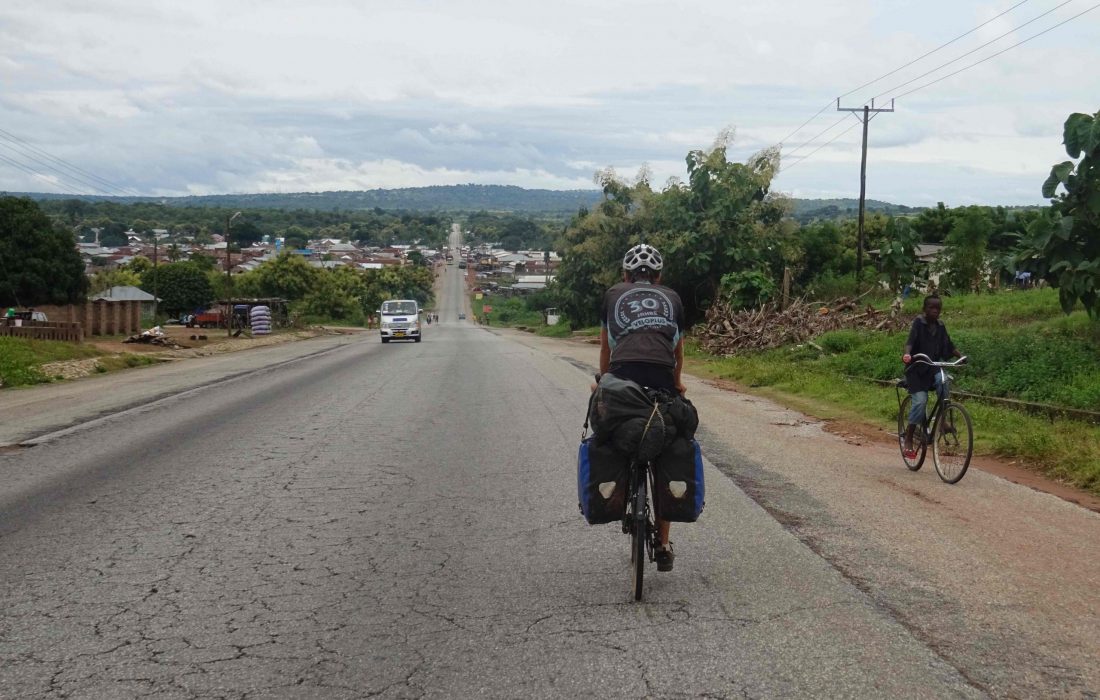 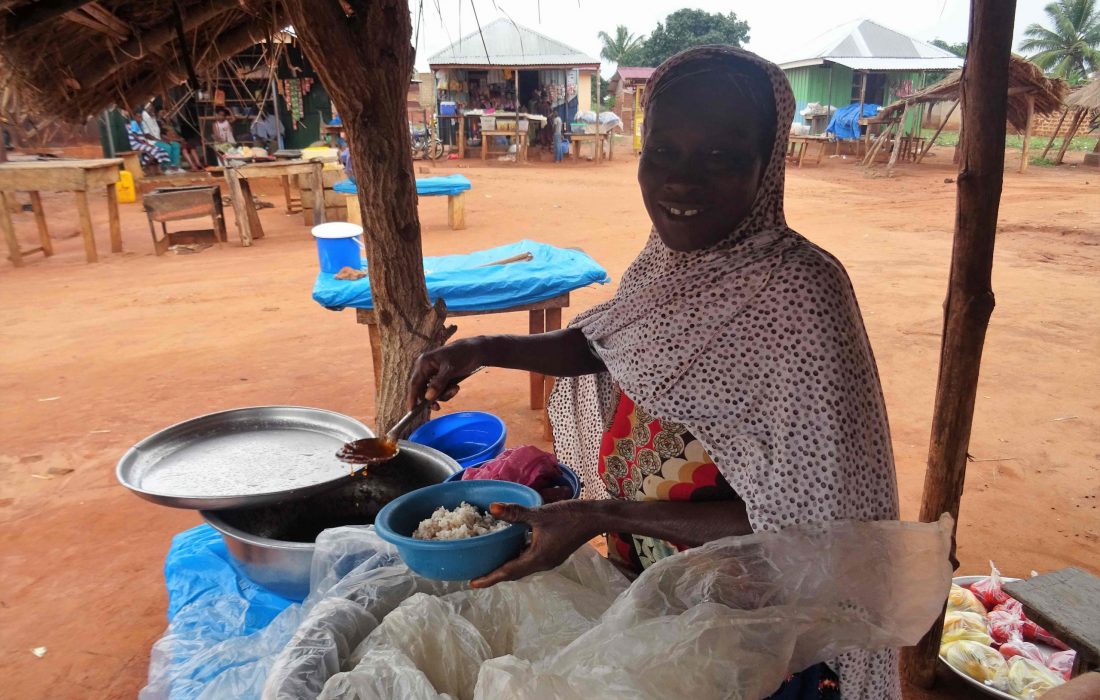 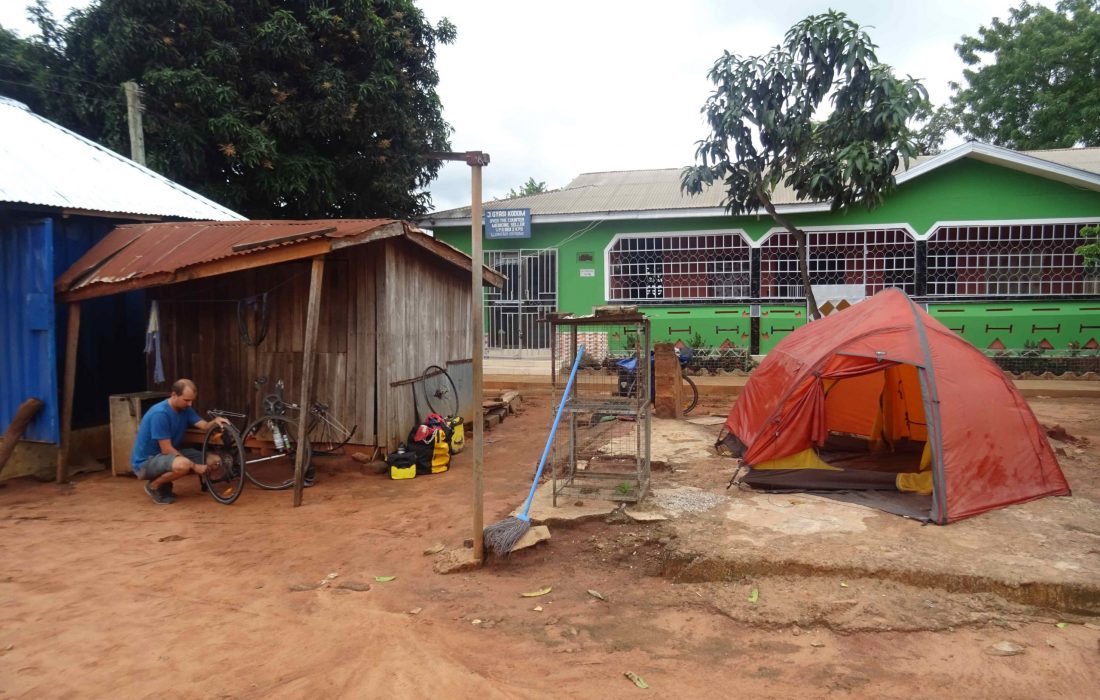 Quickly, we reached Bo, the second largest city of the country. Here, we decided to cycle the newly constructed tarmac road to Zimmi, instead to the unfinished road passing Kenema. Many locals worked under the lead of the Chinese along the road and shoveled rubble out of the future roadside ditch. In the evening, we even met a German engineer, who is in charge of the second part of the road works and stays two years in Sierra Leone for this job.

When we protected ourselves from heavy rain, we met the farmer Michael, who plants bananas, cassava and pineapples. After a short, pleasant conversation, he offered us to sleep on his veranda. 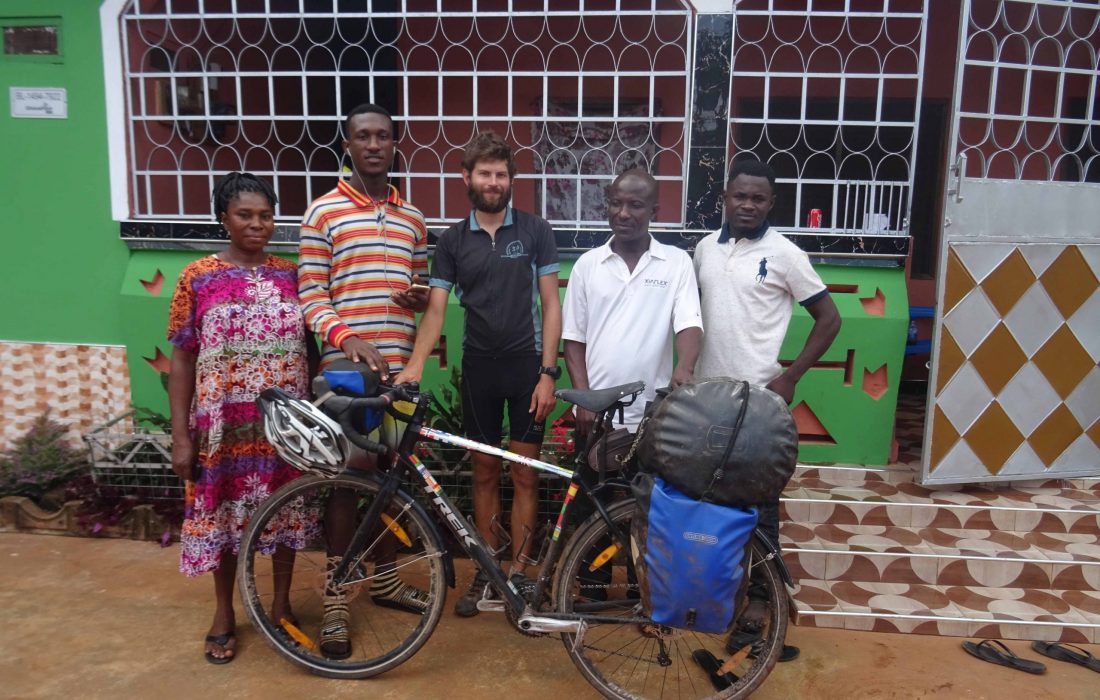 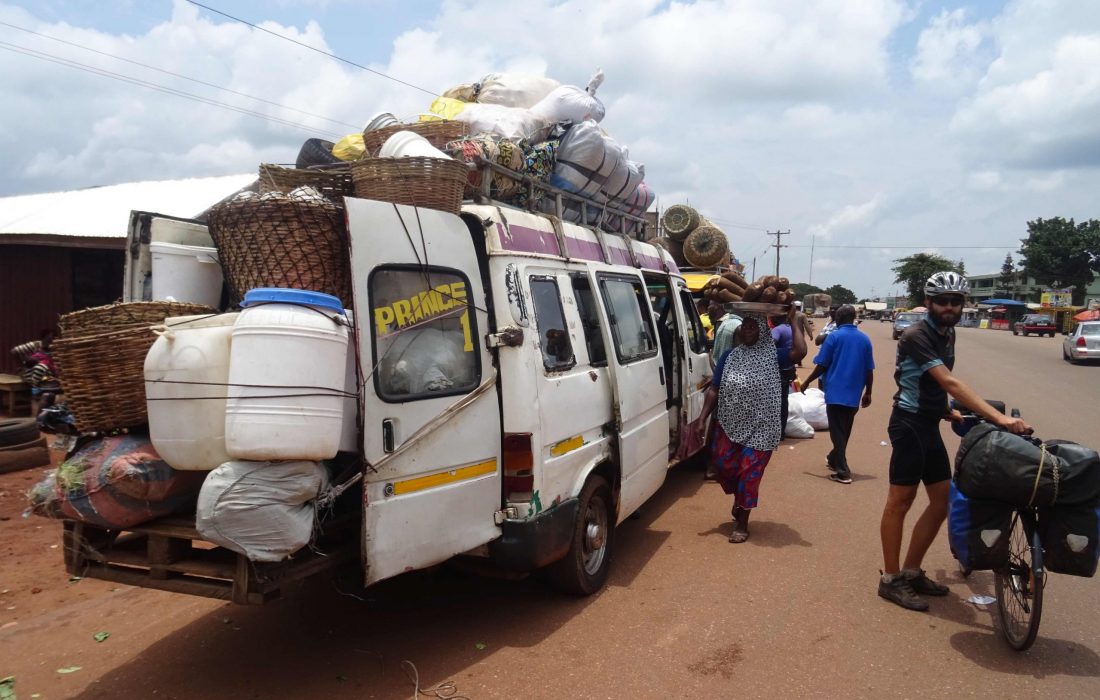 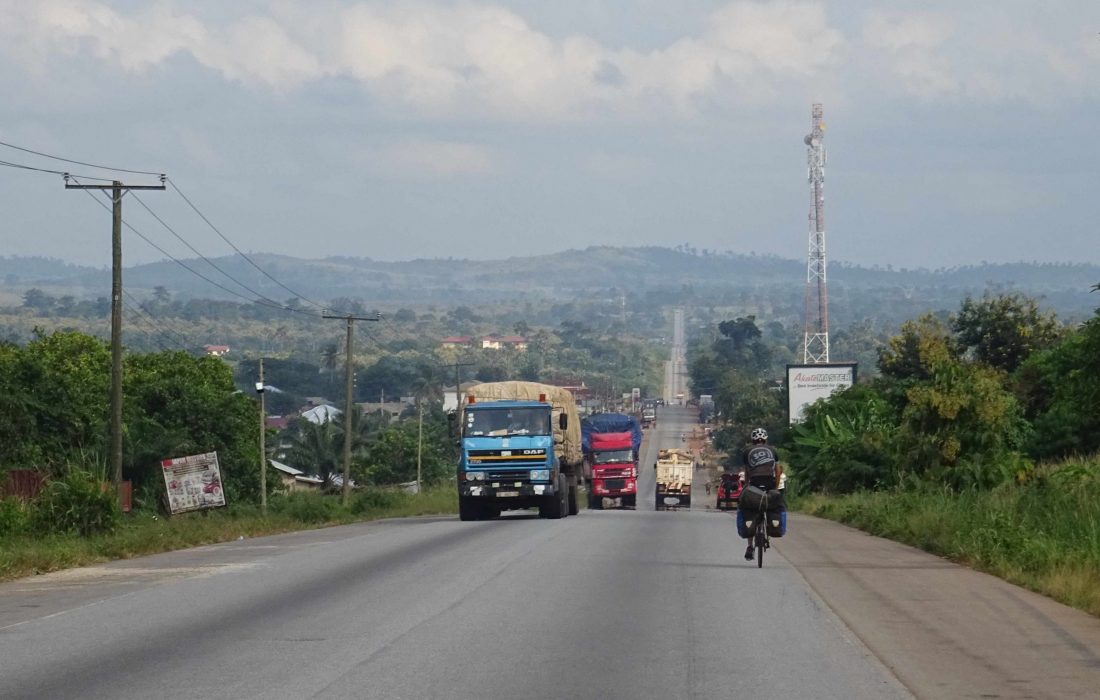 After the African village noises woke us up, we asked if it was possible to get some breakfast. For around one US Dollar, two women went to the local market, bought the essential food items, and cooked a delicious rice meal for us. Whereas, we tried a funny-looking fruit for the first time and a strong boy climbed without the help of any tools up a 10m high palm tree to get us a few coconuts. After two-hours of preparation time, it was time to eat or “chop” how it is called in the local language.

Around noon, we said goodbye to all the children and Michael. Quickly, we reached the junction, where one turns to reach “Tiwai Island”. This island is a sanctuary and home to several types of primates and in the surrounding waters live crocodiles and hippos. After a longer discussion, we could eat with a family for a fair price and sleep for free under a roof. Tourism changed the mentality noticeable in this village directly next to the island and unfortunately, they want money for everything. 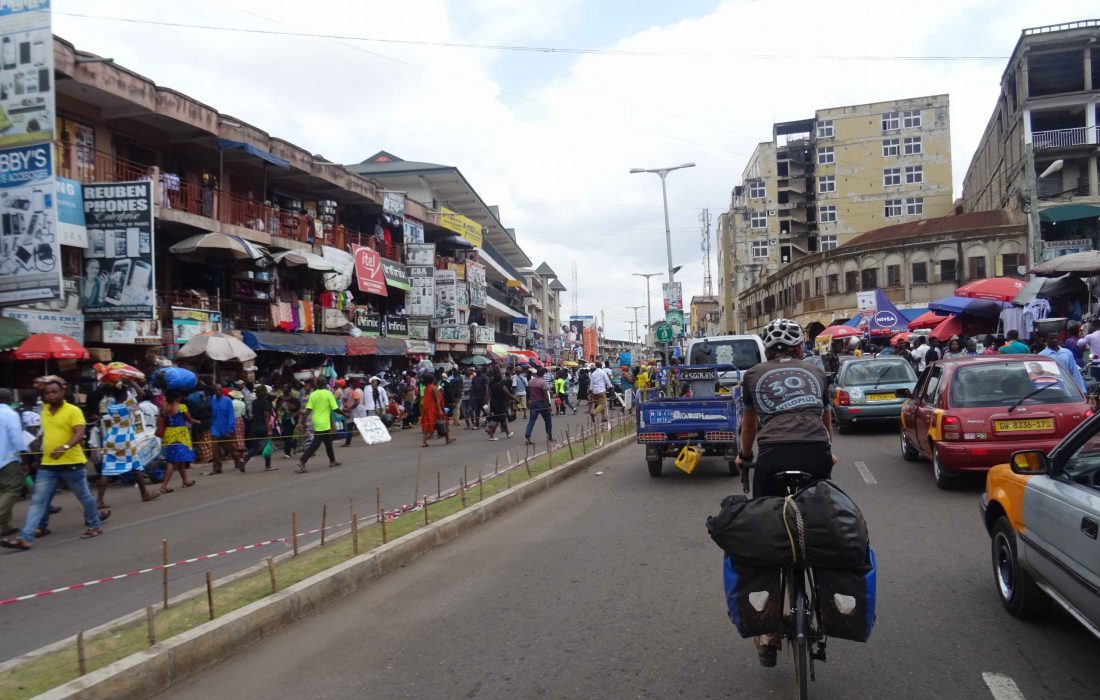 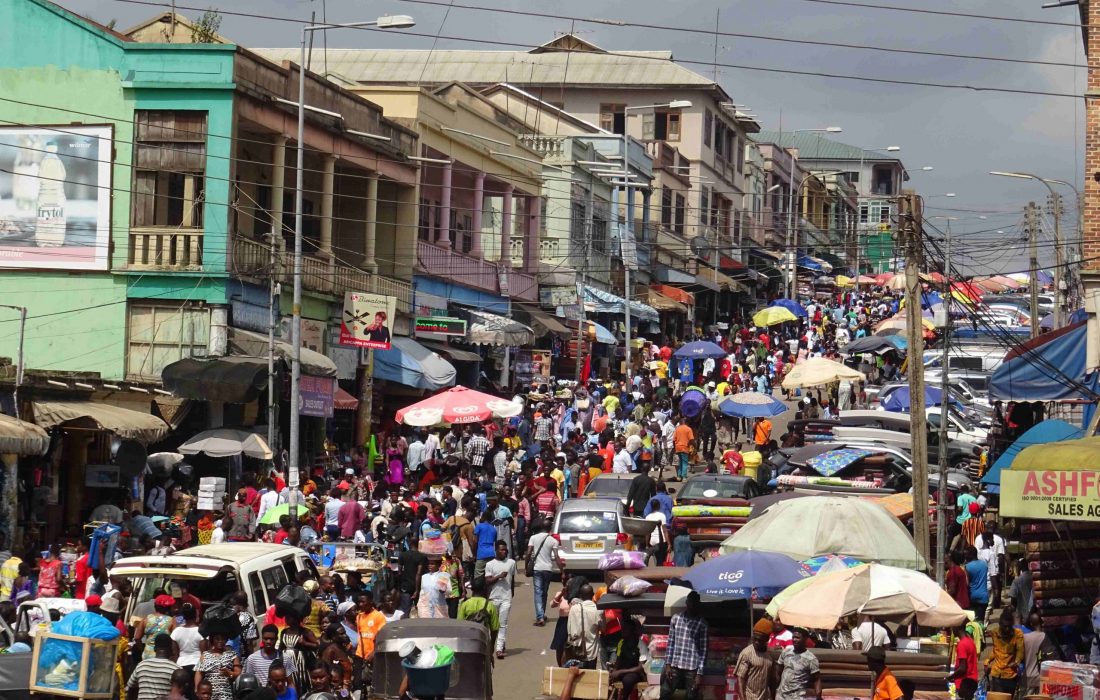 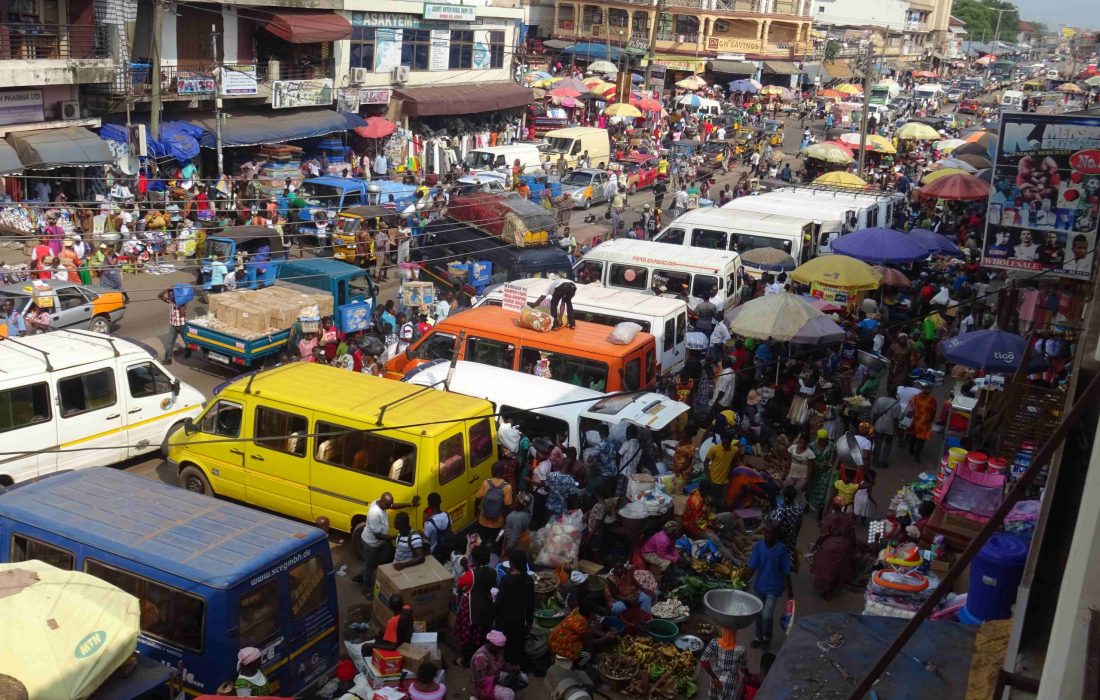 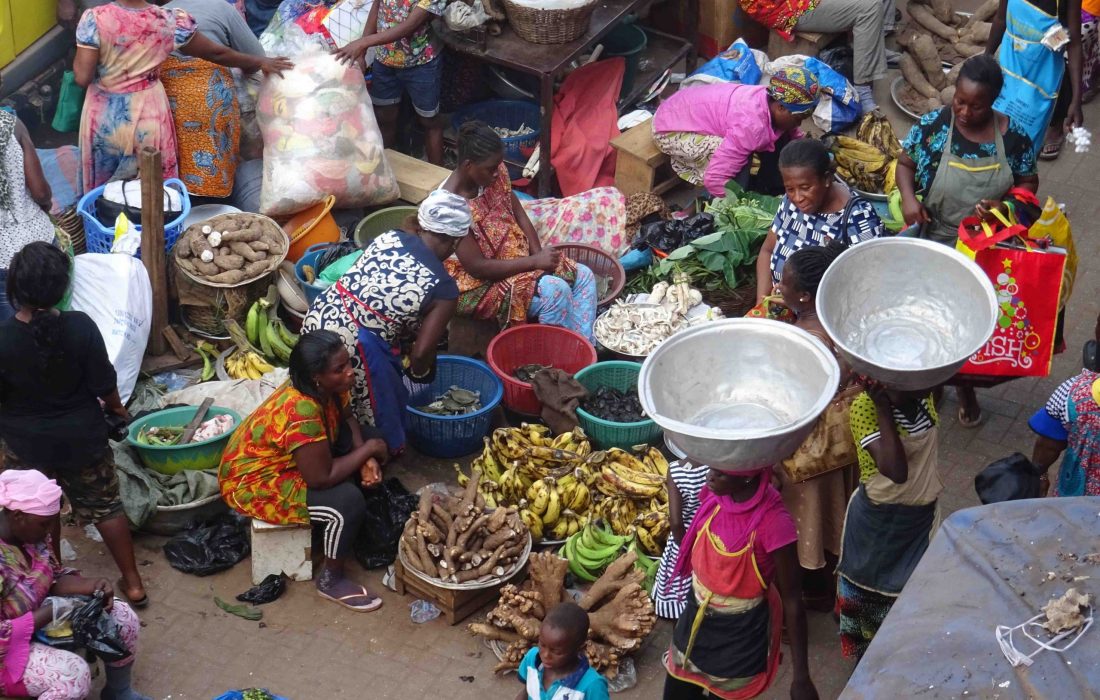 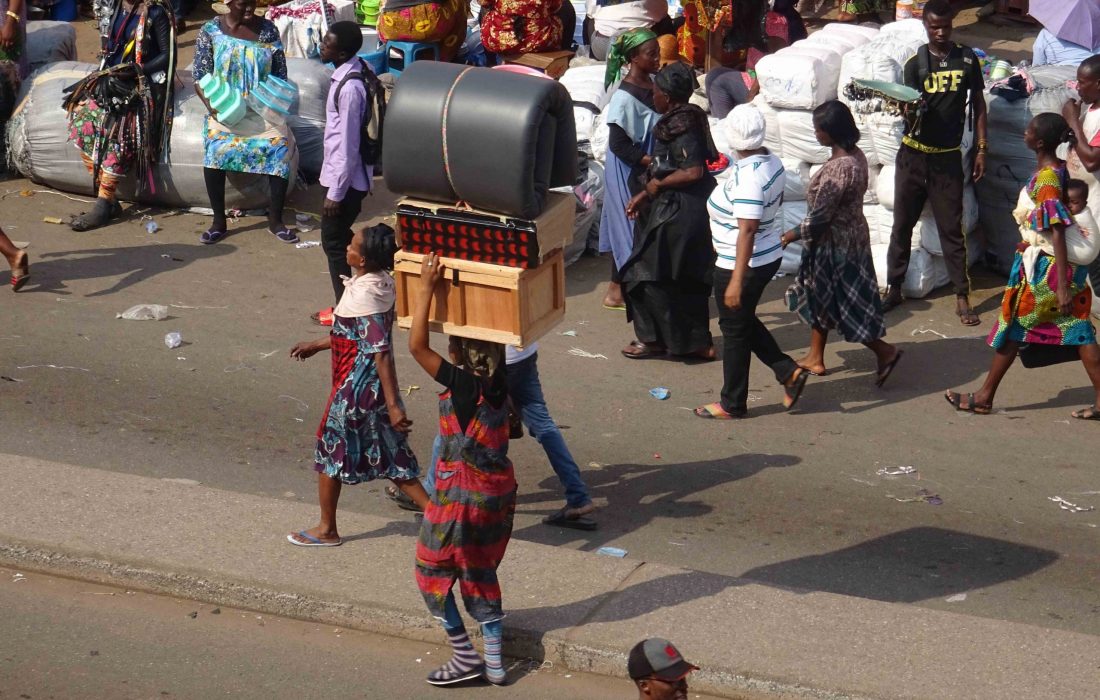 Since we already saw all the animals in previous countries that live on the island, we decided to save the fees for another activity along the way. Instead, Alex, a young, likeable local showed us different plantations and the village life. We visited a cacao plantation, which lay directly next to some breadfruit trees. Afterwards, we visited the herbalist who produces handmade hammocks as well. The old man normally takes about a week to finish one hammock and sells it afterwards for less than 3 US Dollars. After we witnessed the handicraft of the village blacksmith, we left the small village in the direction of the main road.

Zimmi is the last larger town before reaching the border with Liberia and we planned to spend the night in this small city. After we met some friendly locals during a storm, we found a room equipped with neither windows and nor a door in the middle of the centre. 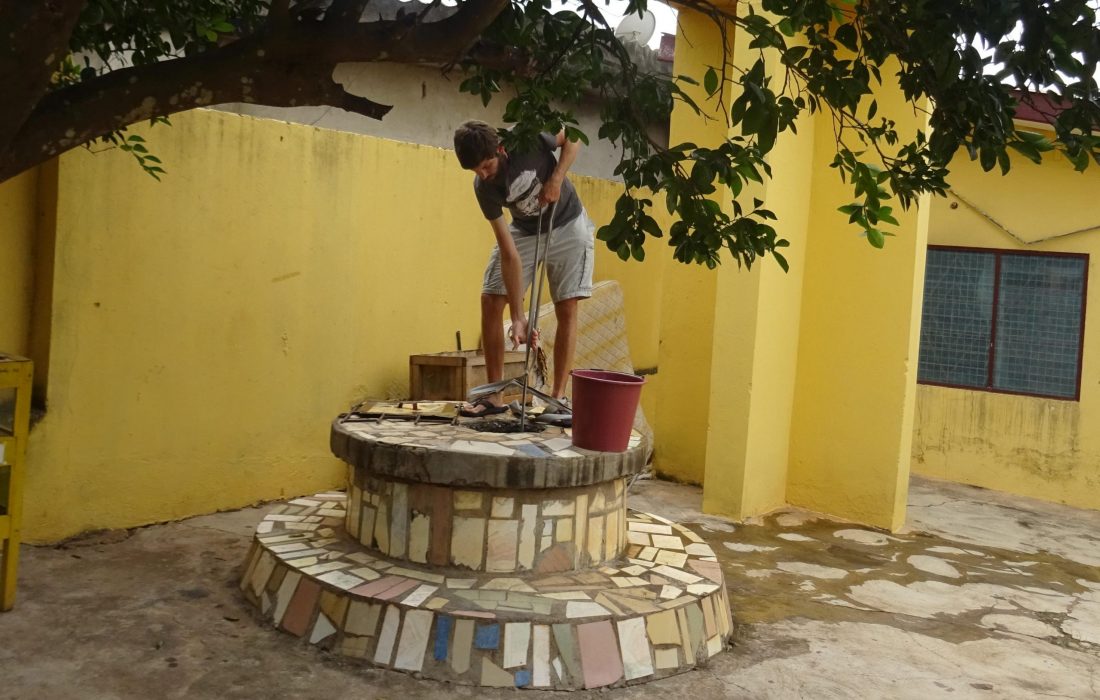 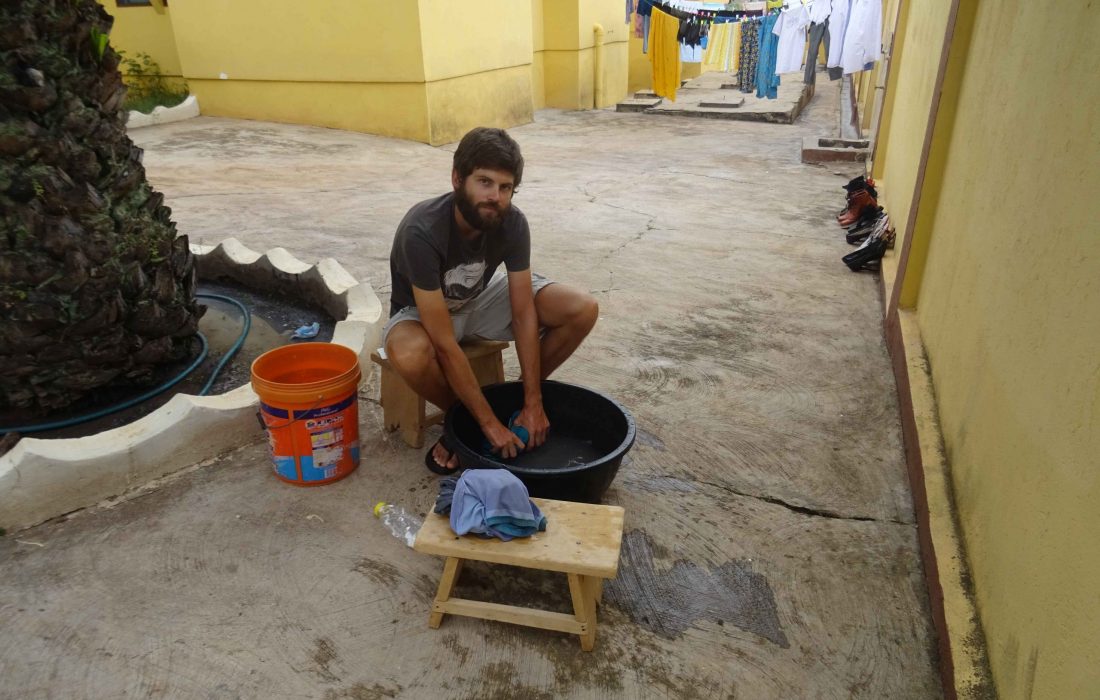 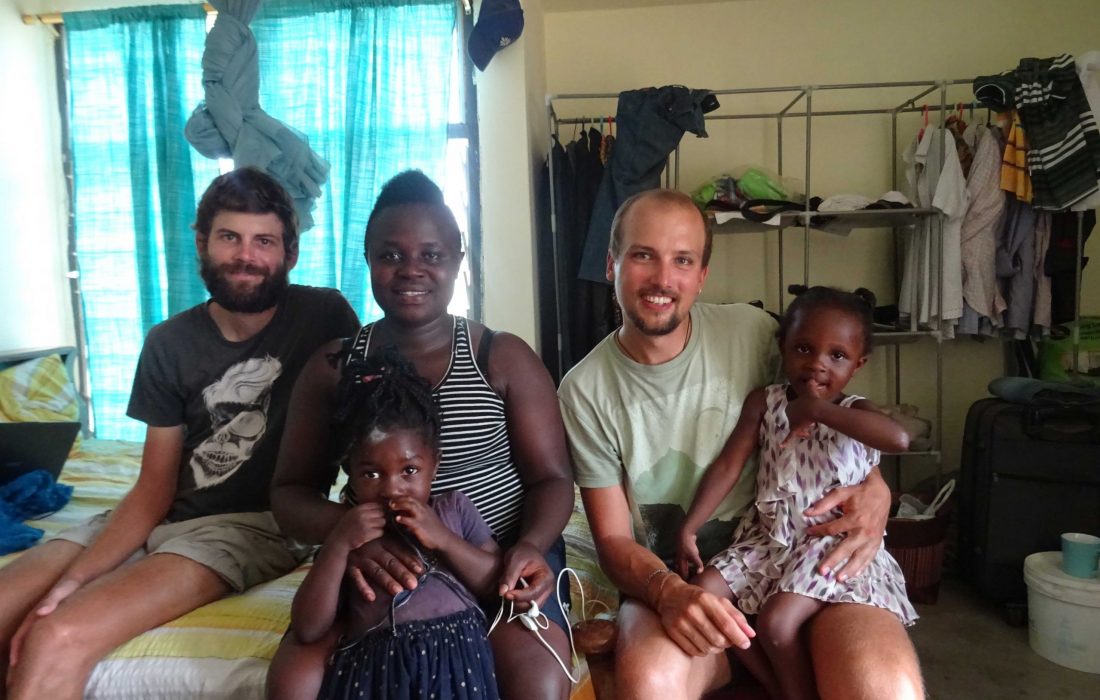 The relaxed, small town of Zimmi seemed very inviting to us and we decided to stay for a few days to chill out. The people greeted us from everywhere with «Ha di body» (How is your body?) or «Ha di aftanoon» (How is the afternoon?) and asked further questions like «What is your mission»? We always answered we slowly («small small») cycle from Europe to South Africa and amused ourselves over the amazed faces.

When we did not relax in our room, we discovered the local market or walked through the streets and talked with various people about politics or our journey. During an afternoon, we walked to a public well to wash ourselves. The people were extremely surprised when we suddenly undressed directly next to the water source to wash off the sweat from our bodies. The African people always assume that we would be superior to them, just because of our skin color. We repeatedly try to explain that we are all just humans and if they can wash in public, we can do that as well. 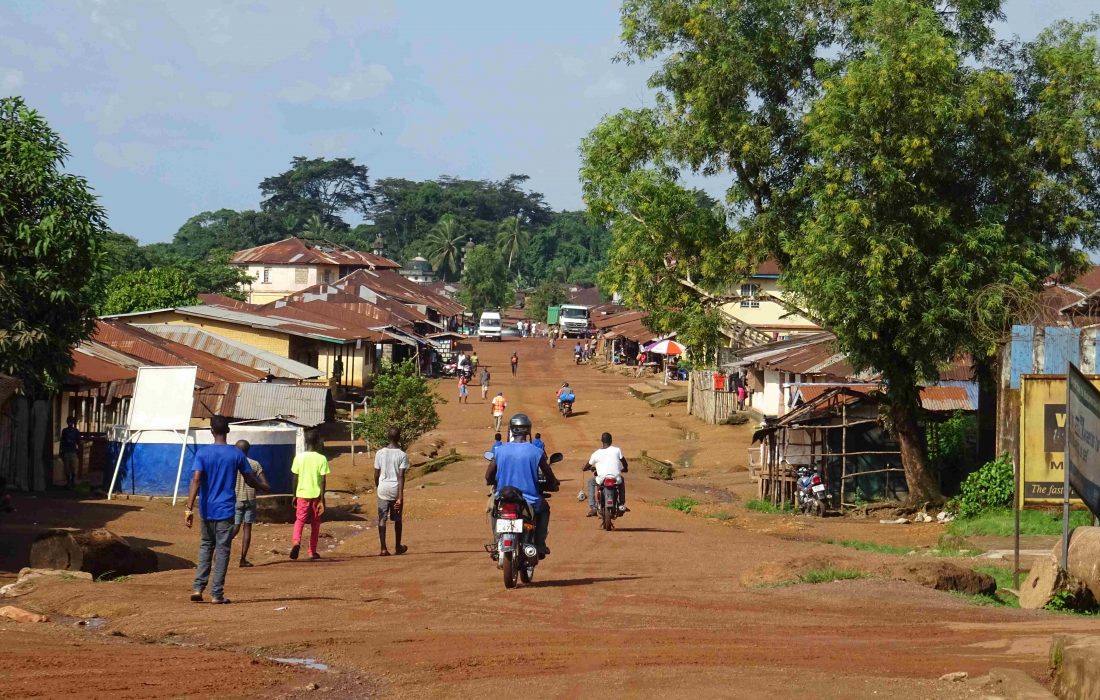 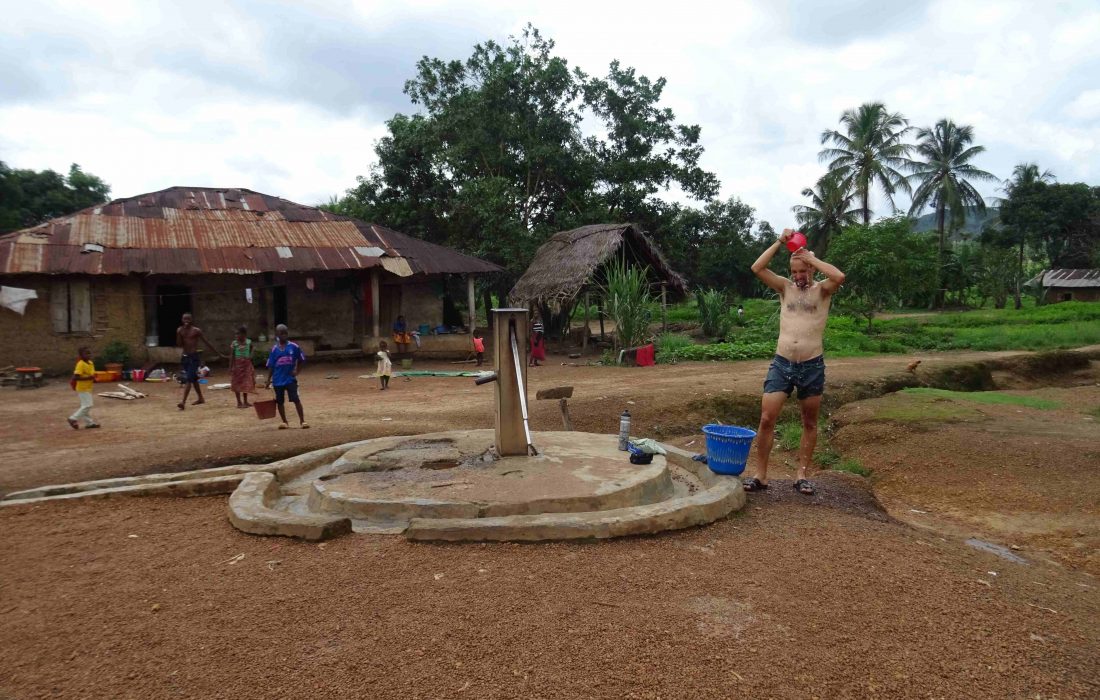 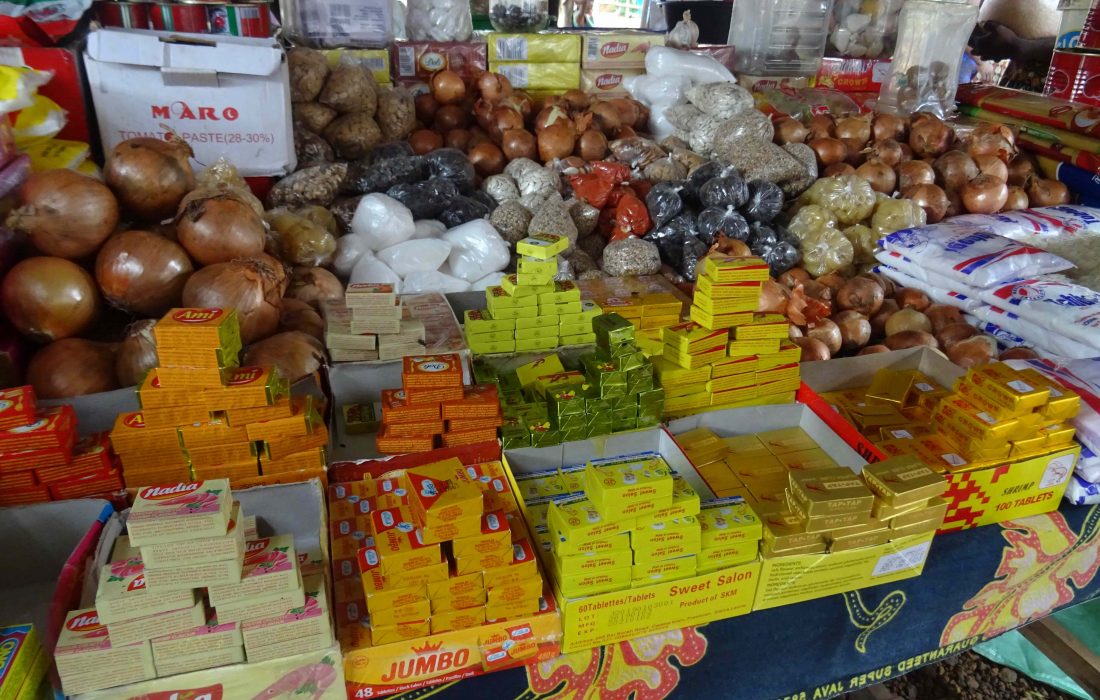 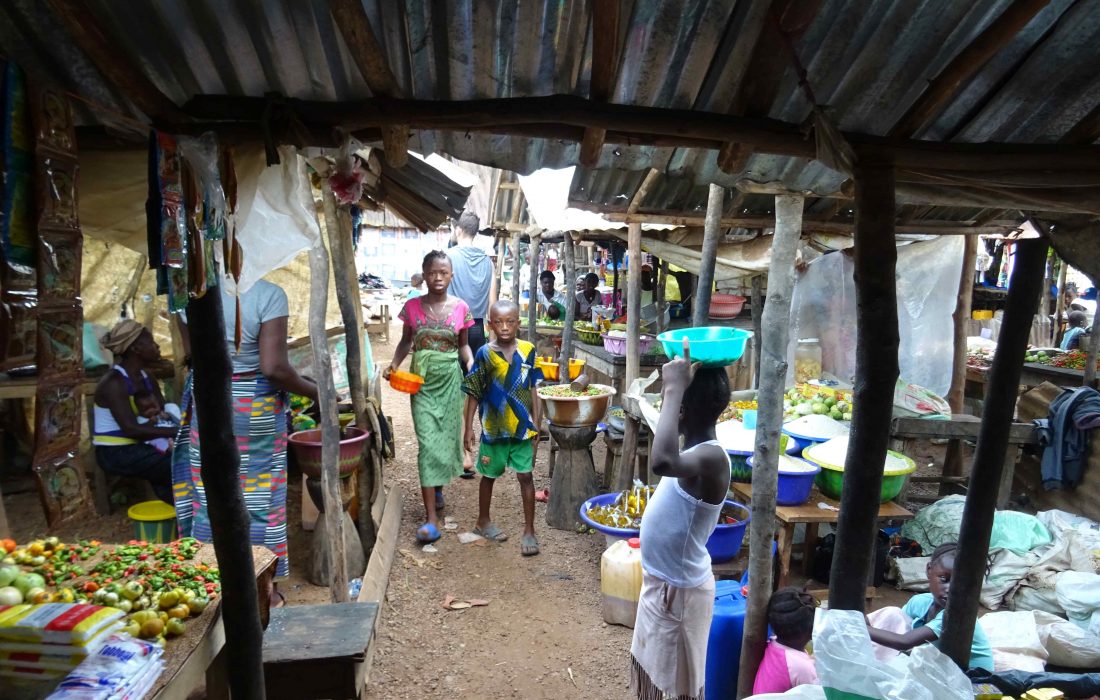 After we said goodbye to all our newly made friends and explained our travel story to other interested strangers, we left the quiet and peaceful town. In the beginning, we could profit from the newly tarred main road, but quickly had to switch the old dirt road through the dense forest due to construction works. In a village, we filled our water bottles and helped a motorcyclist to remount his chain, since he did not have the proper tools.

In the lively border town Jendema, we met a police officer while drinking a local tea called «attaya». Thanks to him, the officer in charge let us sleep in a room inside the police station. The present police officers were frantic, when they heard that this would never be possible in Switzerland. 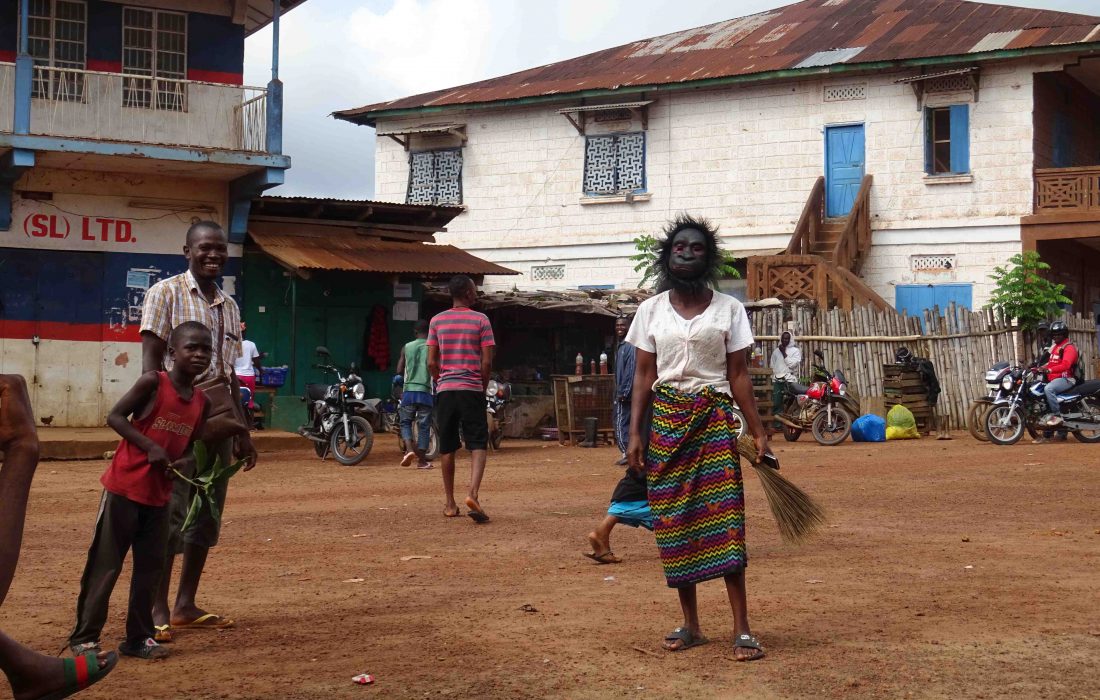 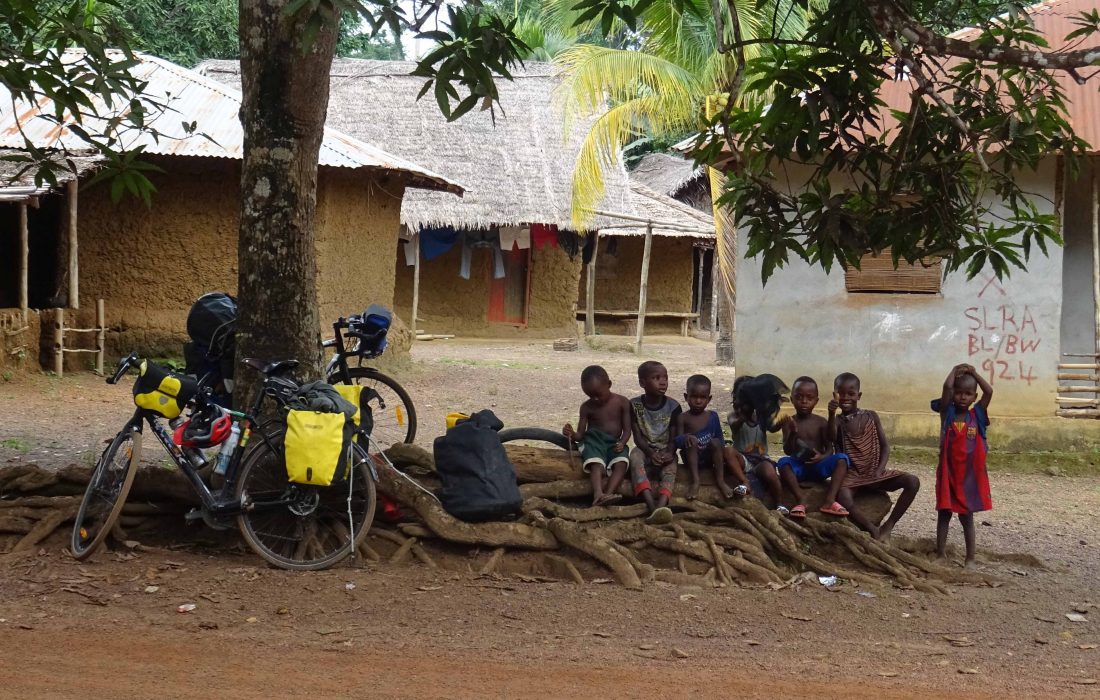 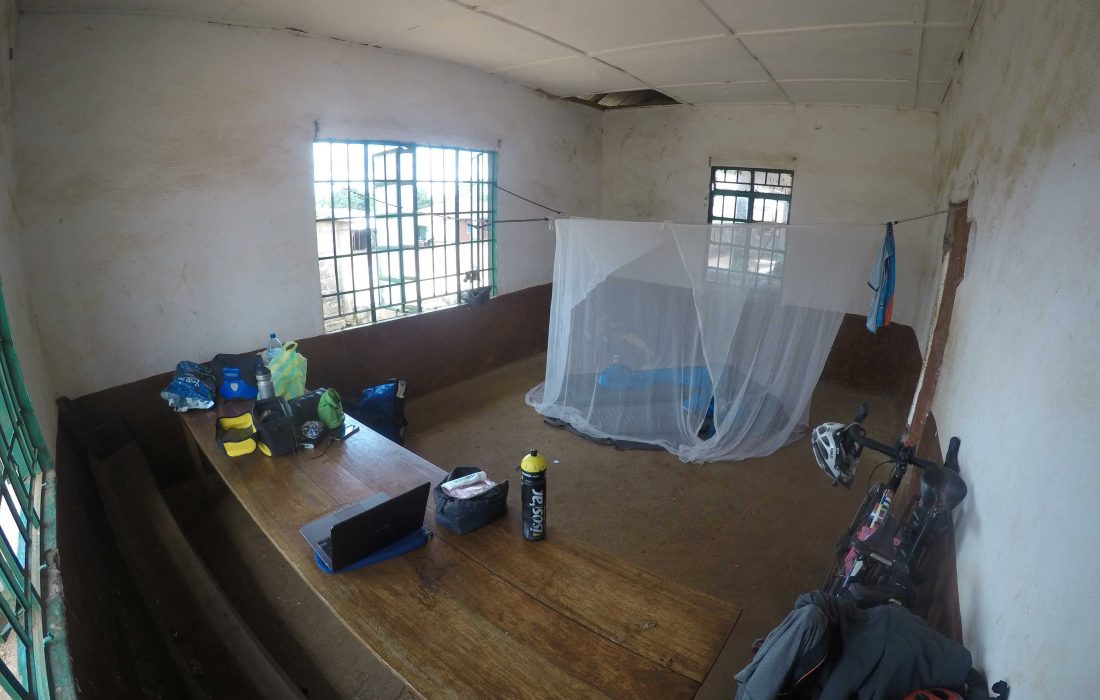 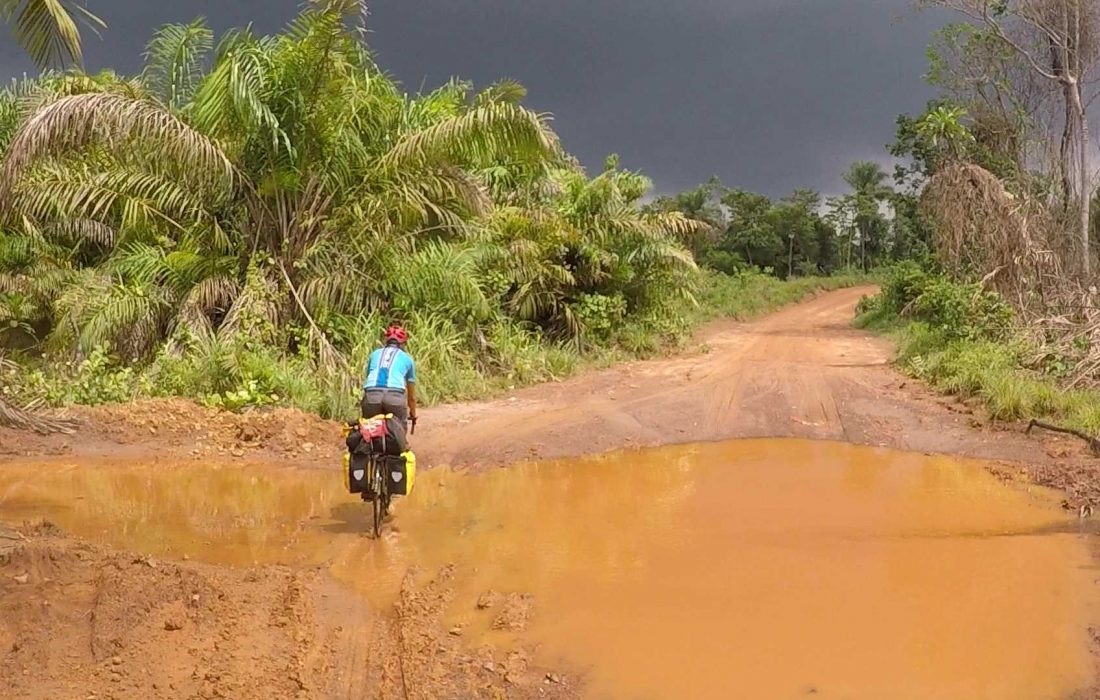