Repeatedly, we sleep in unfinished houses or somewhere in the bush. One could think that people who see us there in our tent would almost collapse by the shock they experience and would immediately inform the whole village. Surprisingly, the Africans take this new situation extremely relaxed and see our behavior as strange, but do not bother at all.

The last weeks were rather dry and we could escape the rain pretty well. However, it started to rain more lately and we had to take breaks, since we do not know when the wet clothes would dry again in this humid climate.

Most of the times, we ask in restaurants or houses, if we can refill our water bottles. So far, this was never a problem and there was always a canister with water or a draw well somewhere. In Ghana, most people drink nothing but water from the plastic bags and cannot understand why we do not like them at all. Therefore, we have to explain each time that the empty plastic bags end up on the ground and this is not good for the environment. Finally, we somehow always manage to get water from a shared water tank, which replaces the wells in this region. 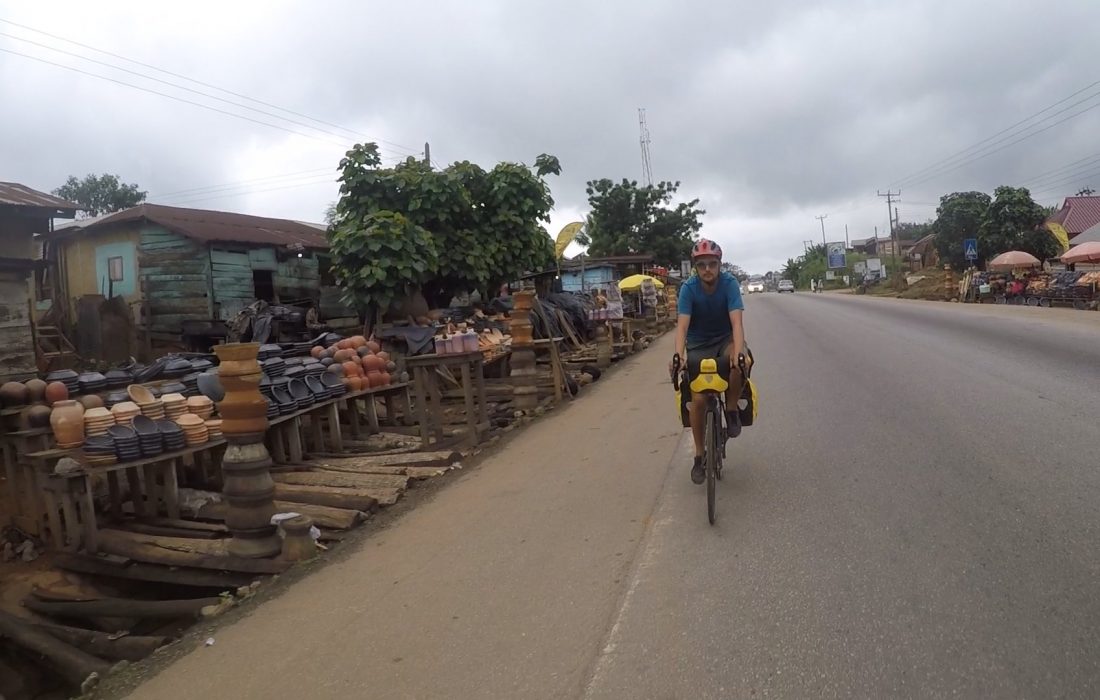 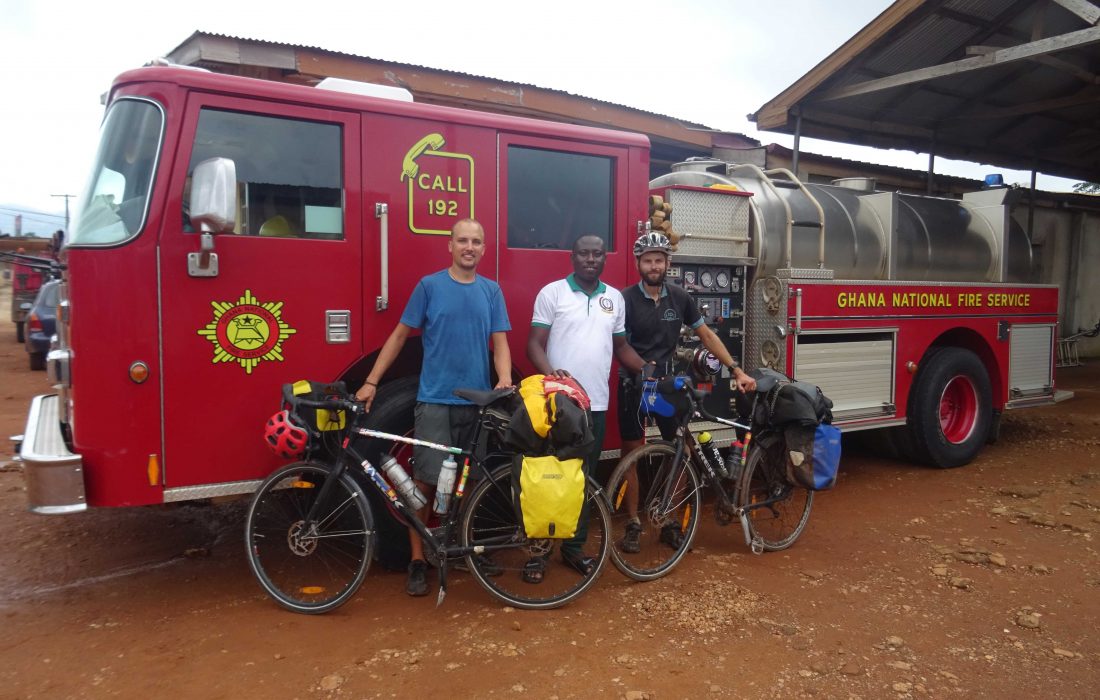 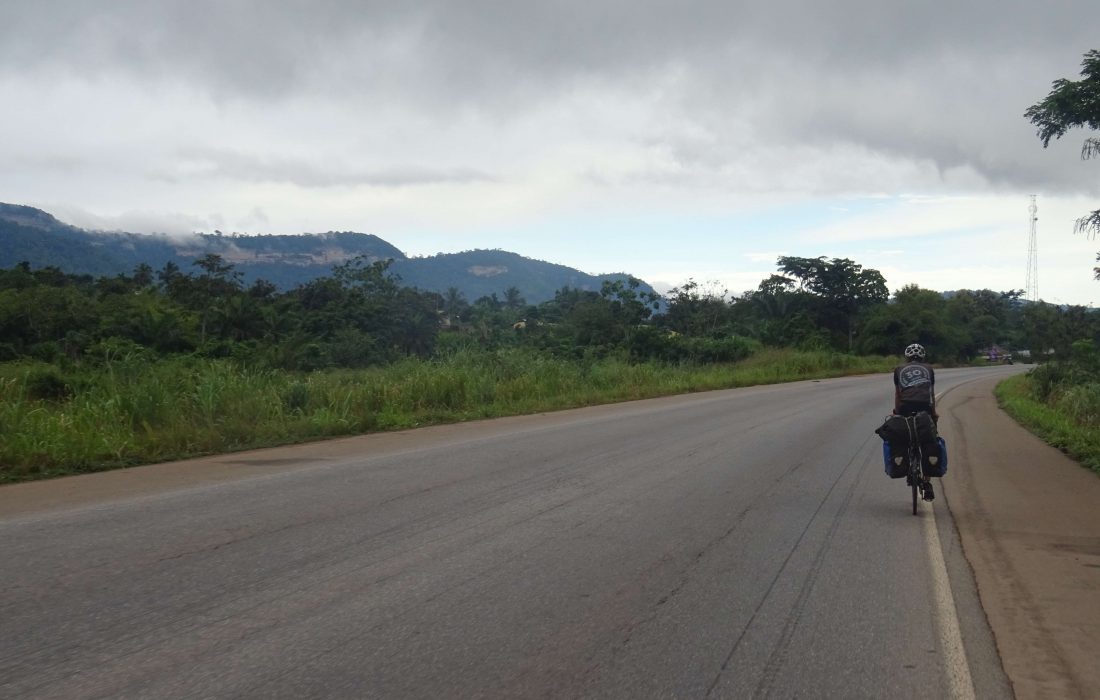 We left the valley surrounded by limestone formations and cycled into a narrower valley. There, we unsuccessfully searched for a waterfall, which we finally found in a completely different location. Instead of paying the horrendous price of 4 Euros for visiting a waterfall, we searched our own trail and reached at the end the point where the water drops several cascades.

Shortly before dawn, we found an ideal place for our tent and were astonished once more that despite the remoteness, we still heard music. In Africa, the motto is that music is only good when played with maximal volume.

A long descent led us out of the cute valley. Afterwards, we had to cross a mountain crest, before we saw beautiful view on the Volta region. We could see part of the immense reservoir and the Volta River. After the bumpy downhill, we got our calories back at a place where all the long distance busses stop. During their stop, many sellers attack them from outside and shout through the windows. A smart girl told us that those women normally start selling their products in the early morning and stop around midnight. Some of them carry more than 20 kg on their head and exposed themselves to the beating sun for hours.

Kente is a cloth only produced in Ivory Coast and Ghana and only kings were allowed to wear it in the past. Directly next to the road, we saw a few weaving looms and a young man who was preoccupied with his work. We asked if it was possible to watch him a bit and he agreed using a broad smile. Skillful and with an unbelievable speed, he threw the drawstrings through the strands.

Directly after we wondered how well the quality of the current road was, suddenly there was a cut and we found ourselves on a horrible gravel road. We could choose between a sandy side and one with lots of gravel. The cars came from all directions towards us and the dust stuck to our sweaty bodies.

Later, we took a detour, so we could navigate around the bumpy road. Normally, we ask some locals about the quality of the road, but this time we naively assumed the tar would be loyal to us.

The rainy night behind an unfinished church was not relaxing at all for Adrian. He had to run out of the tent several times to go to the toilet. In the middle of the night, he additionally got fever attacks. Until we reached a clinic on the following day, Fabian complained having fever and headaches as well. The malaria test showed definitely an infection for Fabian and Adrian had to do three tests of which two were negative and one did not even work.

Therefore, we gathered all our energy to get to the next village and found a hospital. The doctors tested Adrian’s blood with the help of a microscope for malaria and typhoid. Both tests showed negative results and the doctor assumed a stomach infection.

Therefore, we decided to search for a place to stay and asked a woman and an older man in front of the courthouse. They said it would not be a problem to sleep in the courthouse. For us it seemed a bit strange, but did not comment on it. A bit later, we had to move, since some official people were not pleased with us sleeping there and Sara organized us a room at her brother’s place.

Sara visited us from time to time and we talked about life in Ghana. She was a middle-aged woman and had still no partner. This was a big deal for her, but at least she believes that god will take care of this unfortunate situation.

The position of women in Ghana is special and important. All women regard an occupation as self-evident and the rate of 80% confirms that. Interestingly, women never get the name of their husband, have their own bank account and it is possible to have children in the absence of a husband without ruining their image.

We spent most of the time inside our room to rest our sick bodies and watched a movie from time to time on our computer. Only to eat, we walked through town and talked with the interested people on the street.

After two days we already felt better and ready to continue cycling. From everywhere, we heard church singing and priests preaching. In this region and generally in Ghana are many different churches and cults. Those include Presbyterianism, Methodism, African Methodist Episcopal Zion Church, The Salvation Army, Jehovah’s Witnesses, Mennonites, Baptistes, Lutheran Church, Rebirth Communities, Apostolic Communities, and Pentecostalism are rarely seen in Switzerland. Sometimes, we only heard scattered, loud screaming from the churches and other times, we saw people dancing and there were even instruments.

Before continuing, we luckily found a Muslim woman, who does not visit the church and could sell us breakfast. The road was completely empty and all shops closed.

After a few kilometers, we reached the village, which lays on foot of the highest mountain in Ghana. We placed our bicycles in the forest and tried to find a path to the summit. This was rather difficult from our starting point and we had to fight through the thick jungle, until we found the right trail. The ascent was steep and some motivating signs told us when we reached another quarter of the altitude.

From the summit on a bit less than 600 meters, we enjoyed the beautiful view and the surrounding mountains overcasted with fog. A few peaks already lay on the Togolese side, since we were located close to the border.

After we descended with some funny local tourists form the capital, we walked to the Tagbo waterfall as well. The stunning trail led us first through various plantations and afterwards along a stream deeper and deeper into the forest. Finally, the steep valley ended and we reached the imposing waterfall.

In a small village, we saw a white walking and asked him what he is doing here. He worked here as a teacher with a friend four years ago and now visited their friends in the village. The German guys offered us a place to sleep and we exchanged our experiences in Ghana during dinner.

After we left the small, sleepy village and cycled a bit on the damaged main road, the road got suddenly extremely steep. Ascents of approximately 20% and serpentines like on a mountain road in the Alps let us sweat and breathe like an old horse. When we climbed strenuous 350 m, we decided despite tired legs, to climb another 250 m to the highest village in Ghana. Directly after our arrival, torrential rain started and realized how lucky we were to arrive in good time. We skipped the close by summit covered in fog and cycled downhill again. Soon, the road got even steeper and we enjoyed the amazing view on the surrounding mountains.

After our last night in Ghana, we ate the last time «Coco» for breakfast. This porridge, made from maize powder, ginger, chili, hot water and other spices is our favorite breakfast in West Africa. At the last village before the border, we saw women, men and children working in small quarries and felt like being in the 18th century.

At the customs, the officials did not want to believe us that we really cycled all the way from Europe to Ghana. We answered all their questions and the same situation happened again at the immigration office. During this conversations, we were reminded again how much Ghanaians like to laugh and we left the country with a nice ending.

Ghana gained independence in 1957 as the first colony in the tropical part of Africa. The most famous person is probably Kofi Attan Annan, who got popular through his position in the UN. After Ivory Coast, Ghana is the second largest exporter of cacao in the World. Many farmers earn less than 1 USD per day and therefore live in poverty. In addition, Ghana is the second largest producer of gold in Africa after South Africa. Almost a third of all cars on Ghana’s road are from South Korea and we even saw many people with Korean T-shirts instead of Chinese.

Based on the first name, one knows immediately on which day this person was born. Therefore, in most parts of the country, there are only fourteen names. If parents have several kids born on the same weekday, they have to use local remedies. In general, nicknames like scorpion are rather popular. According to this interesting name giving, everyone knows exactly that Kofi Annan was born on a Friday.