In the first Cameroonian village, the next chief in power received us and afterwards we cycled down an extremely steep hill. Due to the hill, we lost around 800 m of altitude. The friendly customs officers greeted us in French and we definitely arrived in Cameroon.

Without any further escort, we fought with the bumpy dirt road and several steep sections in the direction of the main road. Unfortunately, our hope of a better road melted into thin air. Further, we were jarred and had to avoid deep ditches from the rainy season. At least the steep sections contained a tarred road, since there were many of them. After we left a mountain pass behind us, the terrain got flat.

The population is much smaller in Cameroon compared to Nigeria and the people are less emotional during our passages. Almost indifferently in comparison to the loud and interested people of Nigeria. 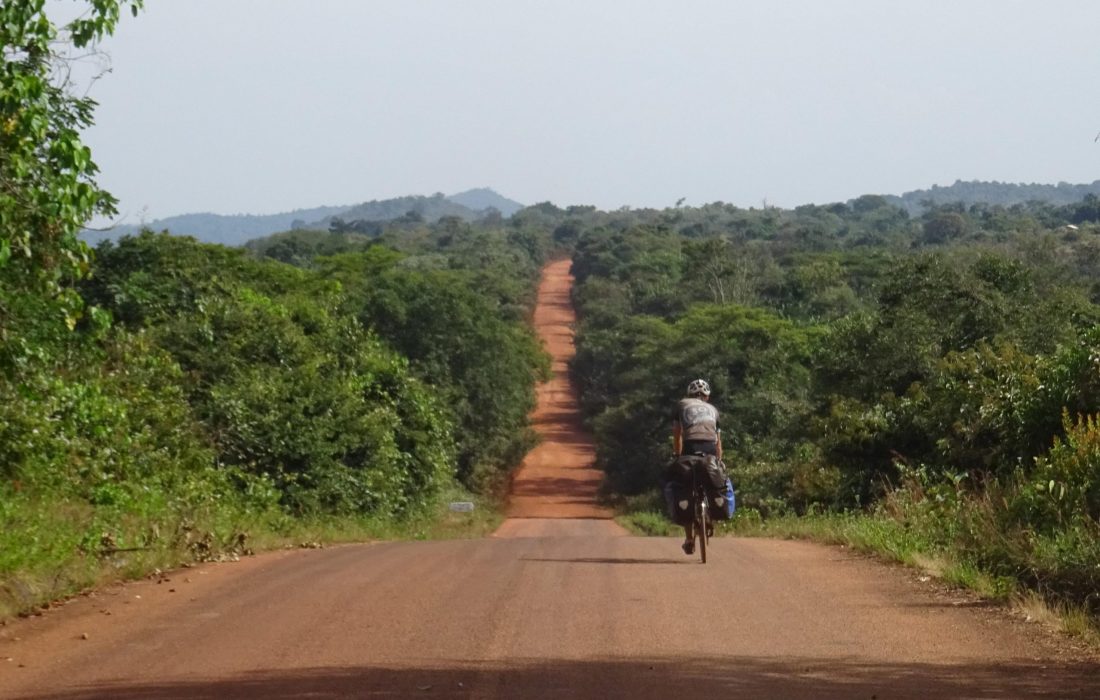 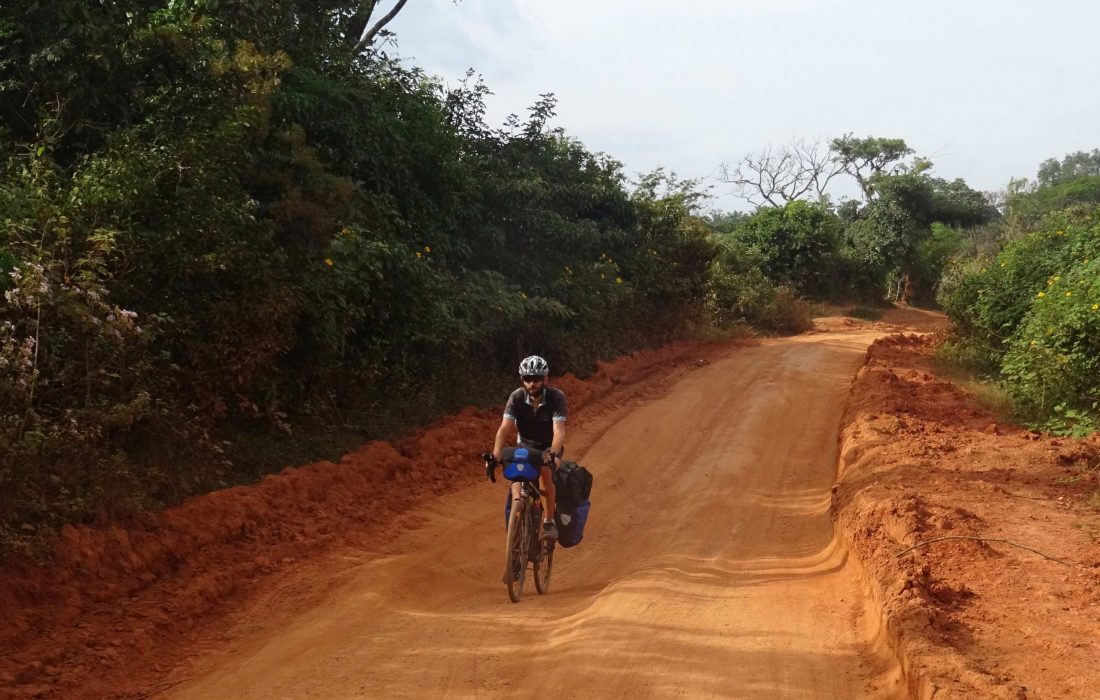 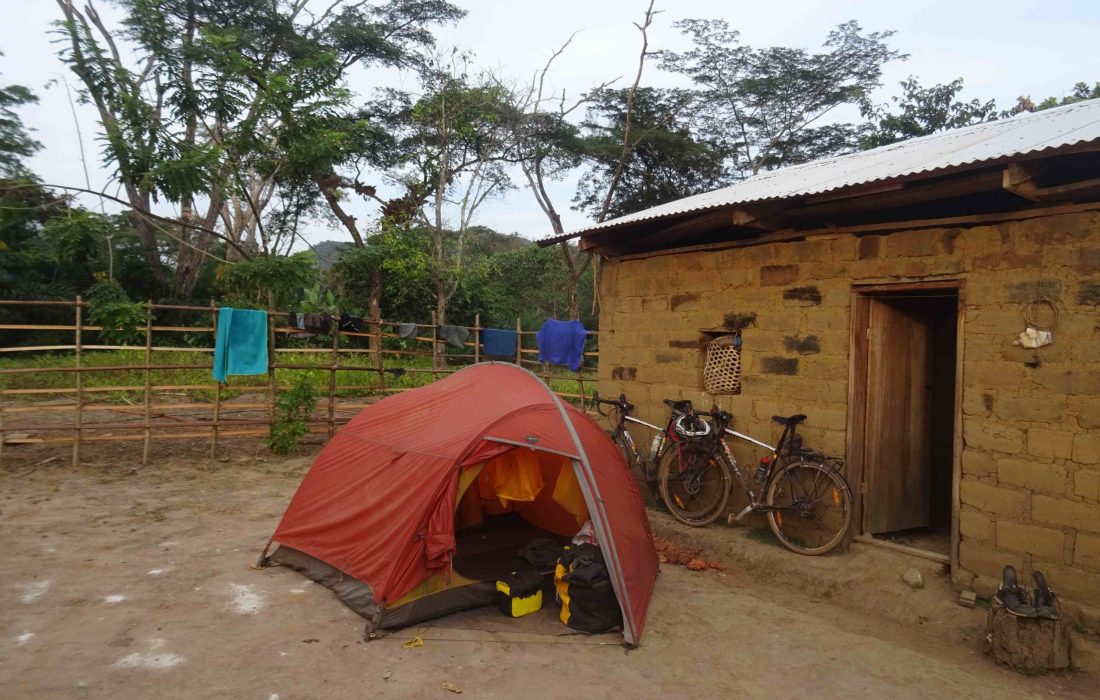 For breakfast, the poor vice-village head and his wife cooked exactly the same dish for us as the evening before. This gave us the message that each centime counts and we offered them some money, even though they did not ask for it.

Unfortunately, the quality of the gravel road did not change at all and all the bumps almost shook us out of our mind. The rainy season is not over long enough and therefore the road reparations are only in the fledging stage.

In a larger city, the road surface changed and we were rarely as glad to see a tarred road. We bought a SIM card in a tedious process and searched for the king. He received us immediately and we witnessed how worried citizens asked for advice. Those men visiting the king, brought wine in a Tetra Pak as a present. The king’s assistant divided the wine among all those present. 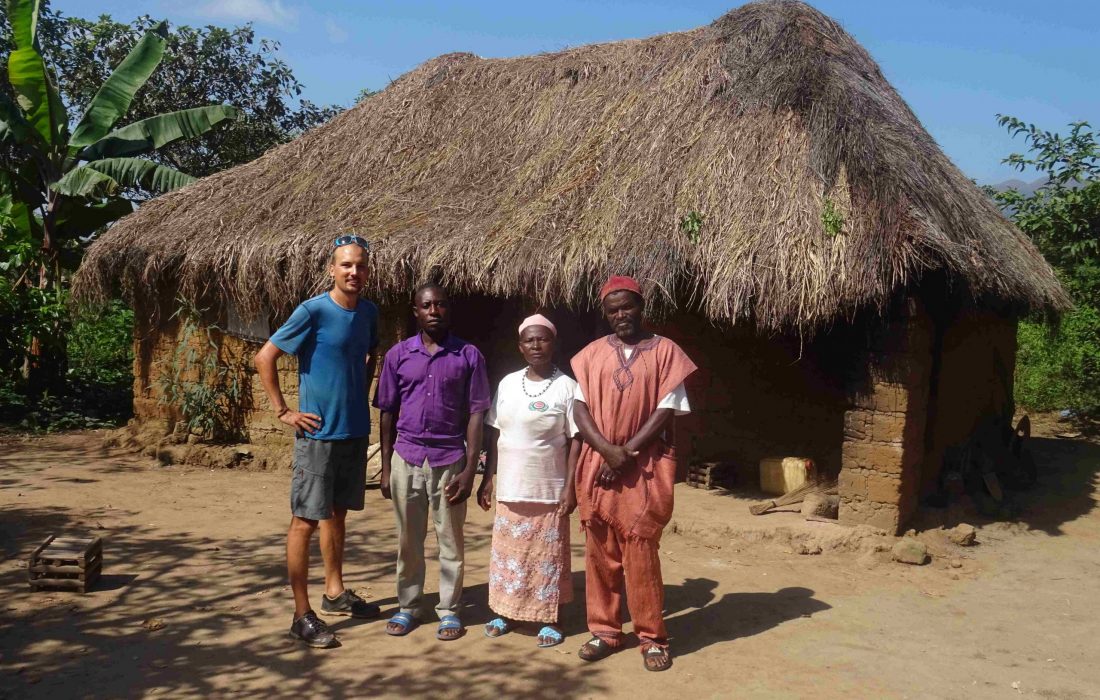 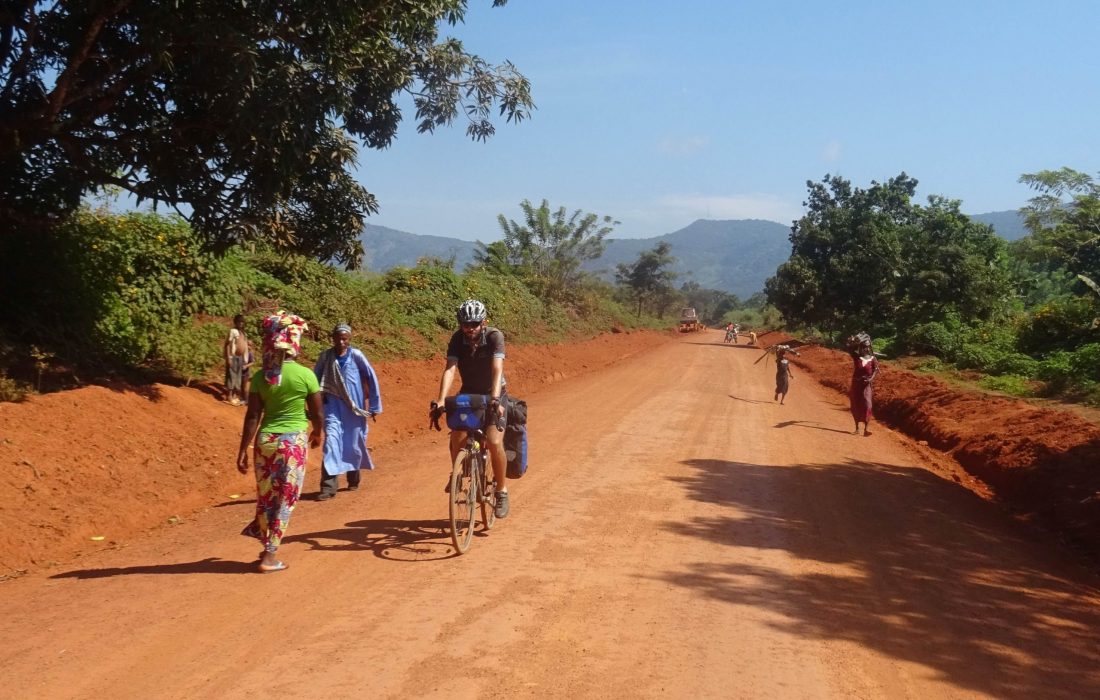 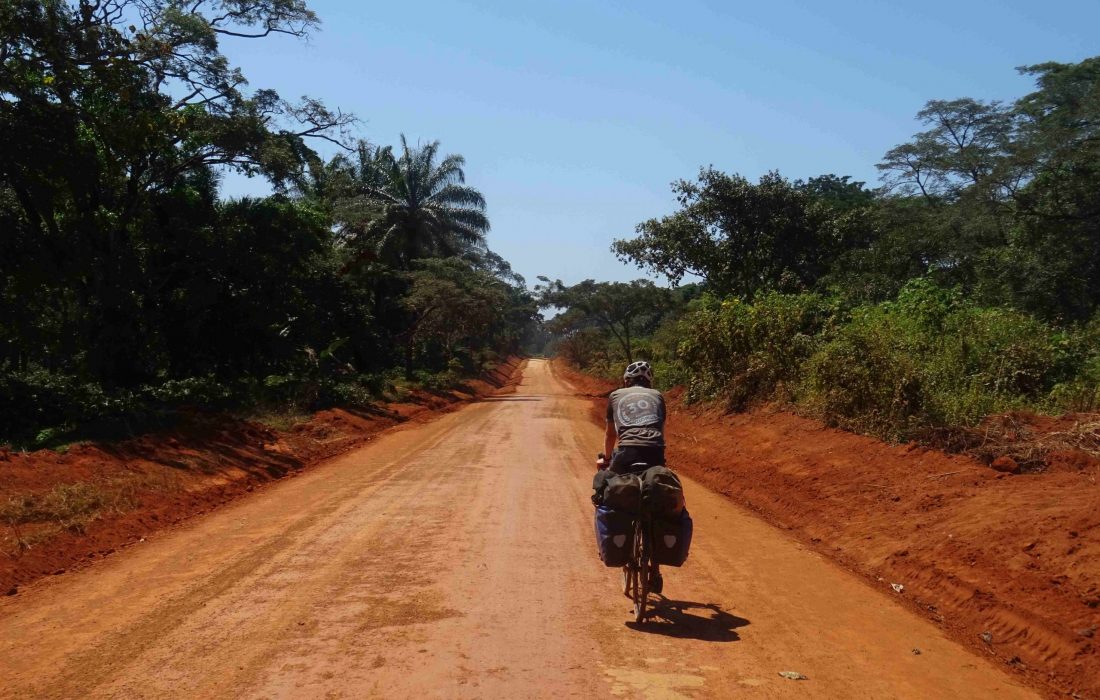 When we wanted to continue at 9.30 AM, the king and his best friend, the police chief were already drinking their second beer (6 dL). Of course, we could not deny the invitation to try the self-brewed palm wine and drank a glass with the tipsy, prominent men.

After several mountain passes, which took our last energy, we ate a bread with chocolate spread in a small village. We offered the family the from Nigeria and they gave us cooked cassava tubers to try.

In Foumban, the largest city in Cameroon so far, we searched for the pompous temple and saw that there was a museum in the shape of a snake-spider combination. The security guard showed us a room where we could sleep. Many young men tried to convince us to buy overpriced figures or other souvenirs. Since a long time, we seemed to have landed in a touristic place.

In the late afternoon, the young prince invited us to sleep in his house and we accepted the generous offer. 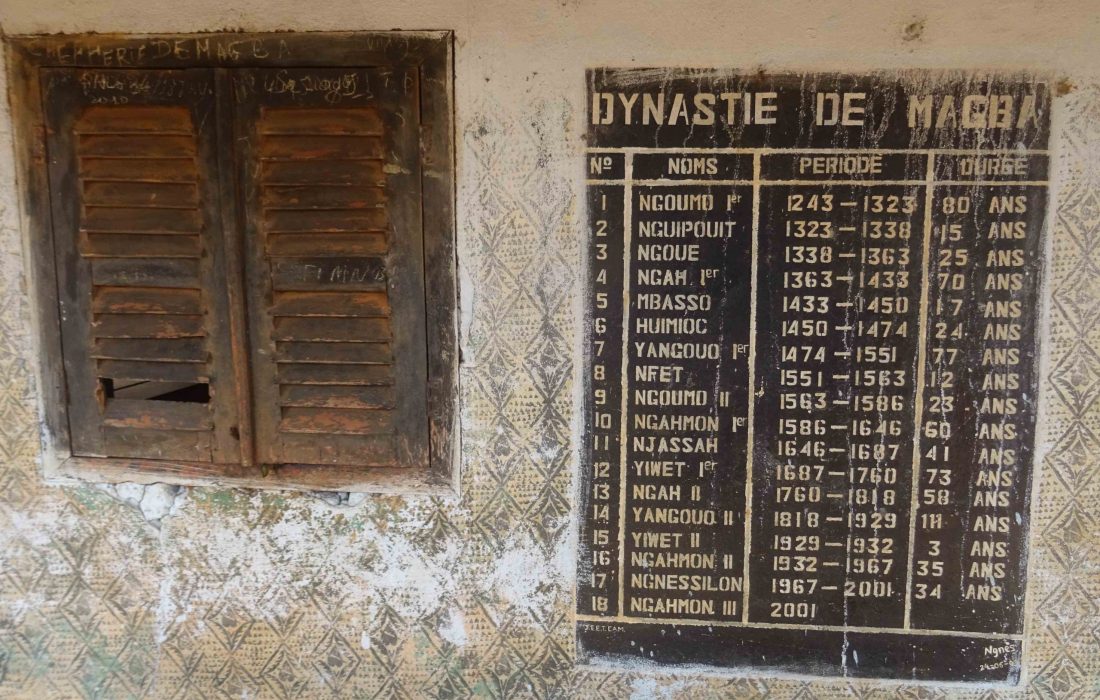 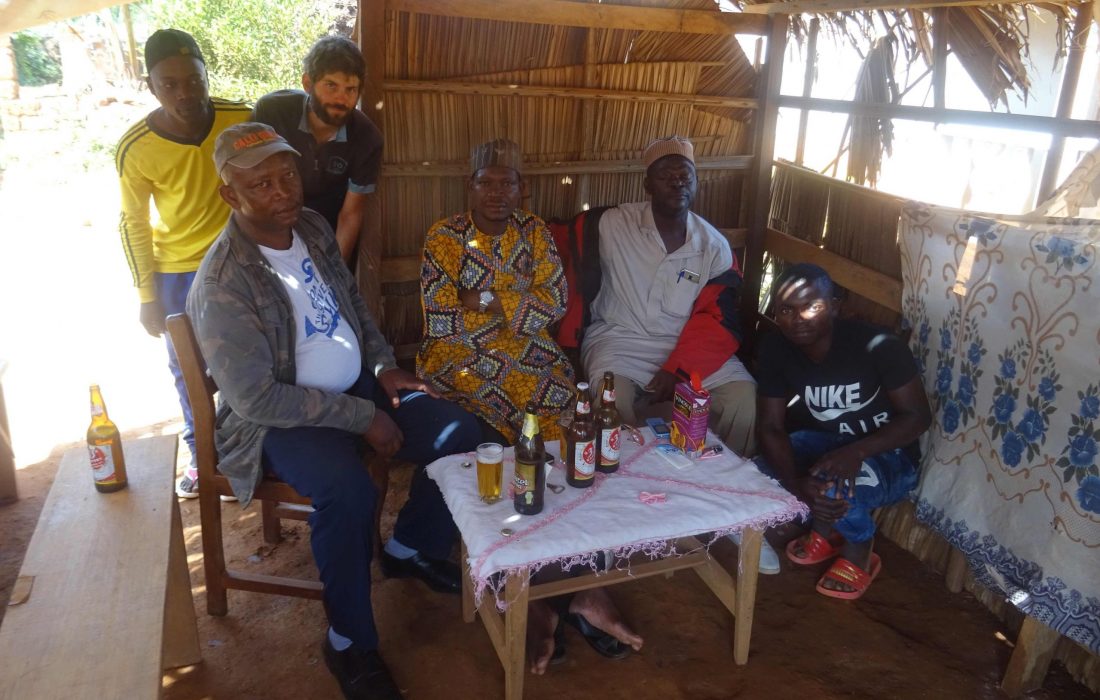 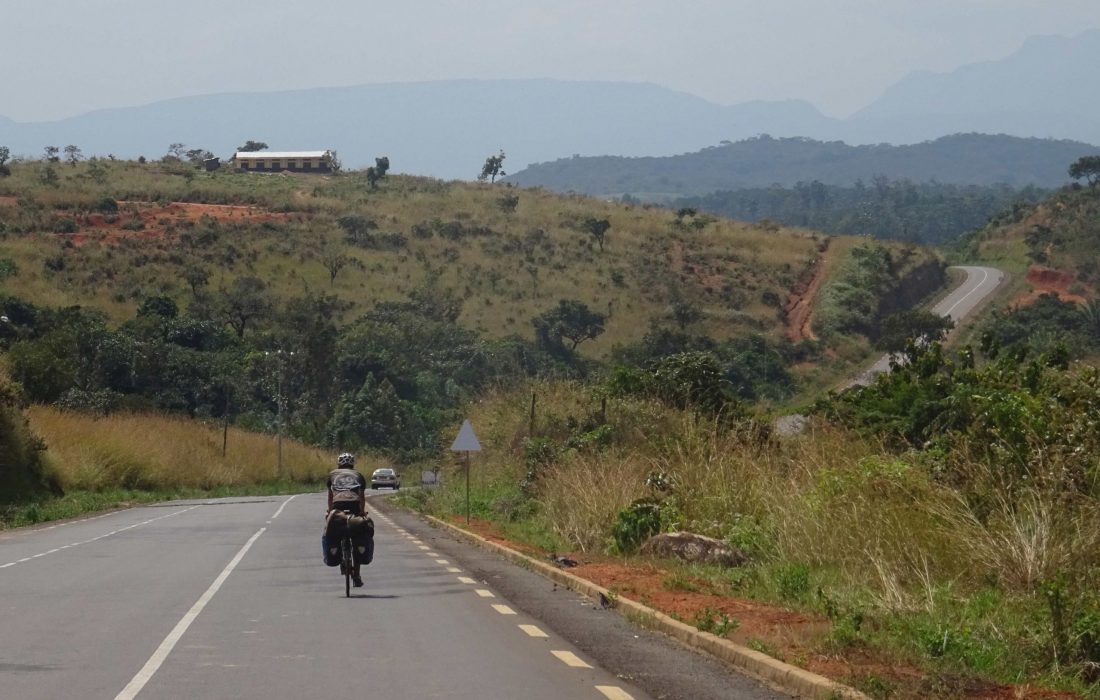 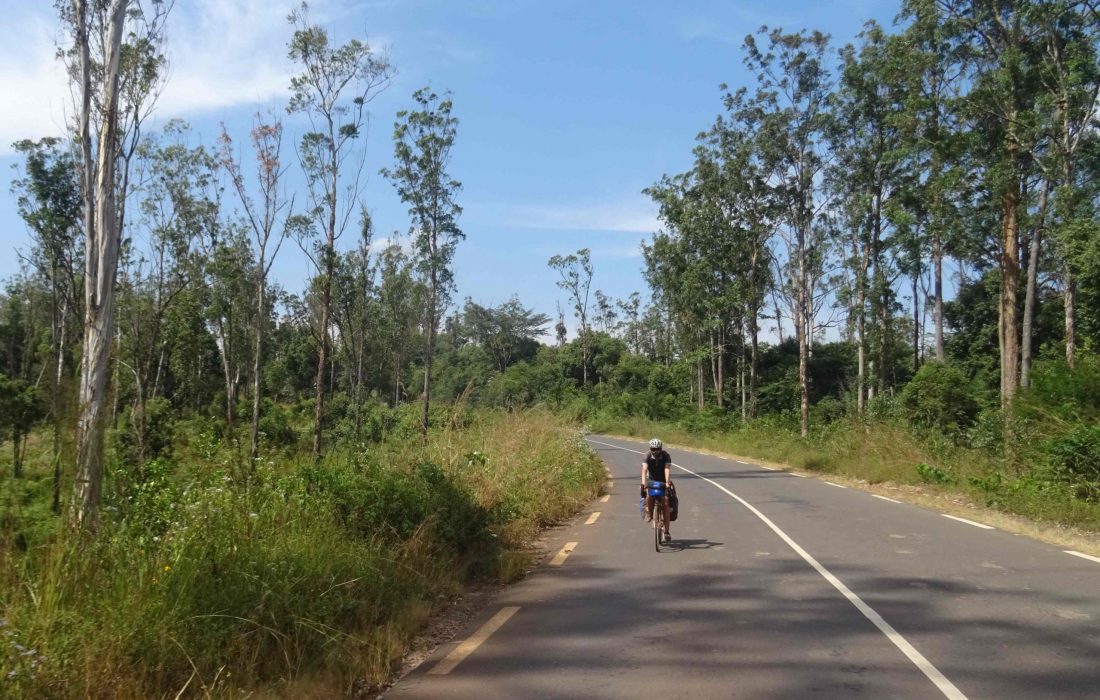 Due to the immense hospitality of the oldest son of the king, we decided to rest one day, to get an insight into the life of a prince. The generous, young man and new-fledged father showed us the organized market and we met part of his family. His uncle invited us to a noble restaurant to show us his favorite food.

The current king or sultan has in comparison to his father “only” 7 wives and 23 children. His predecessor had impressive 50 wives and countless kids! Additionally, we learned that only the king could cross his legs and nobody else in the palace grounds. 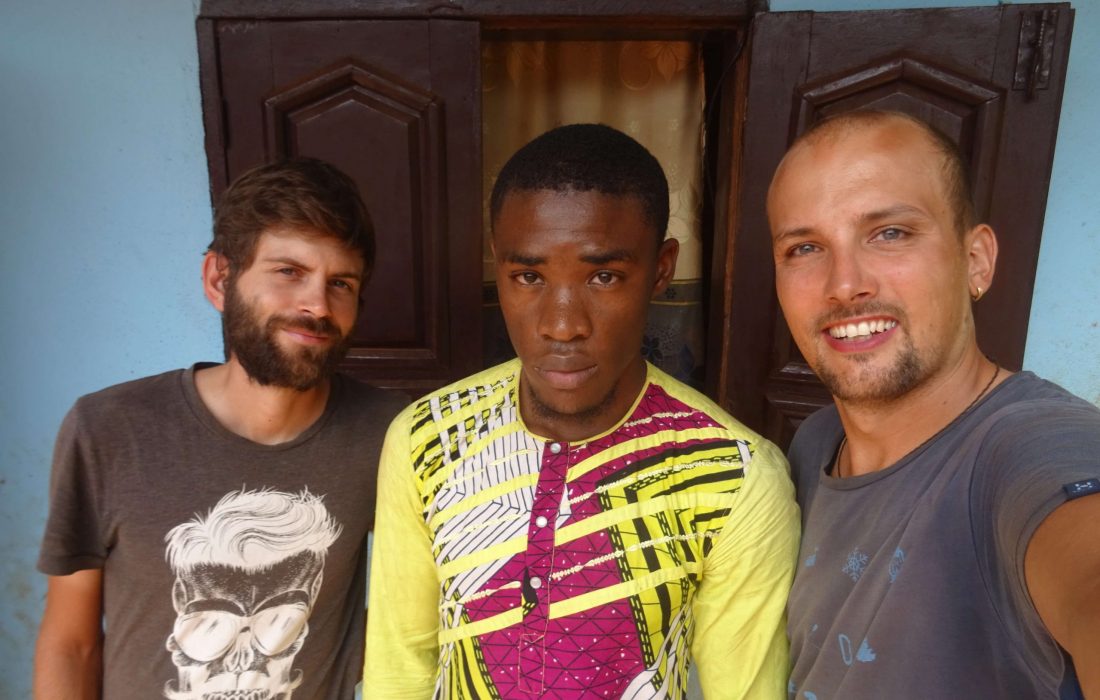 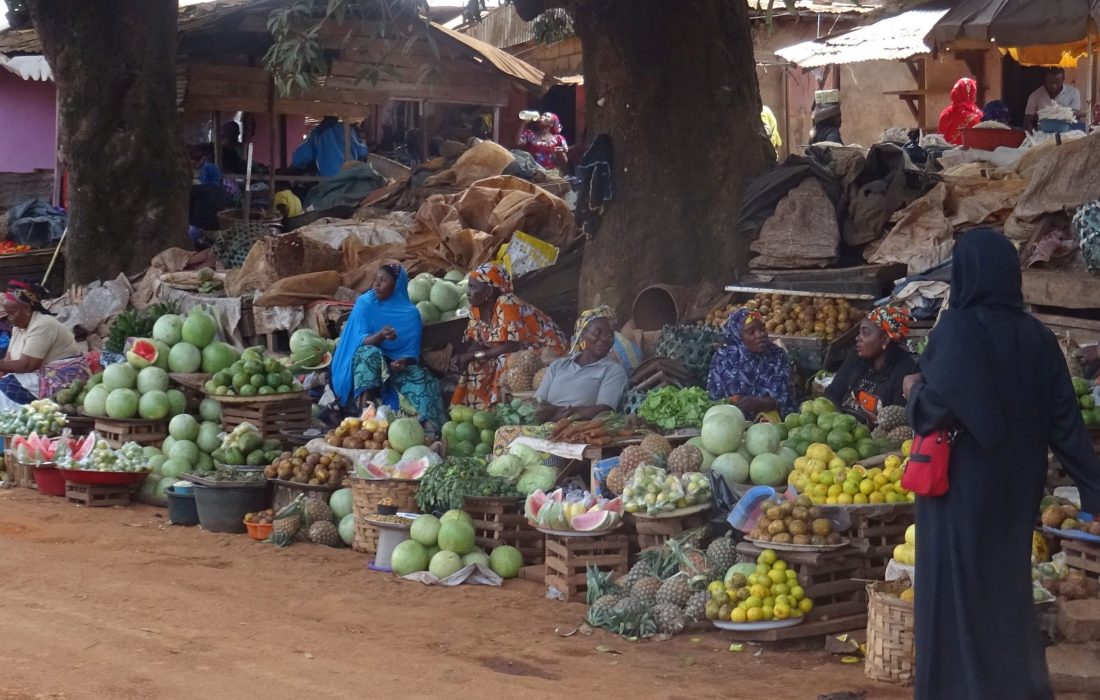 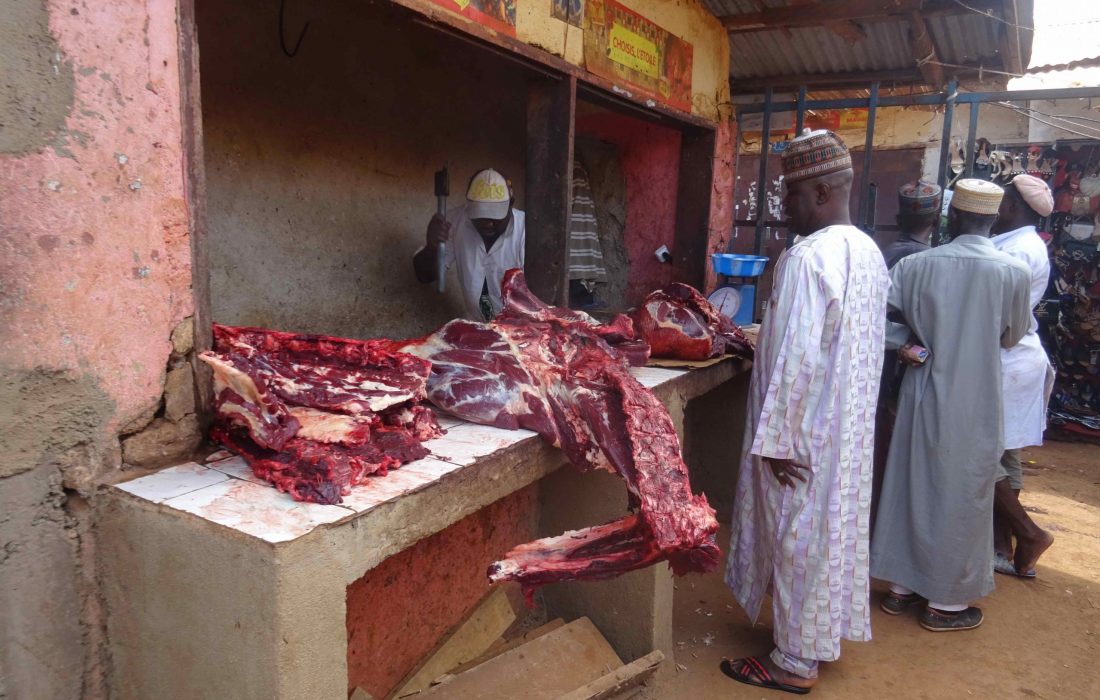 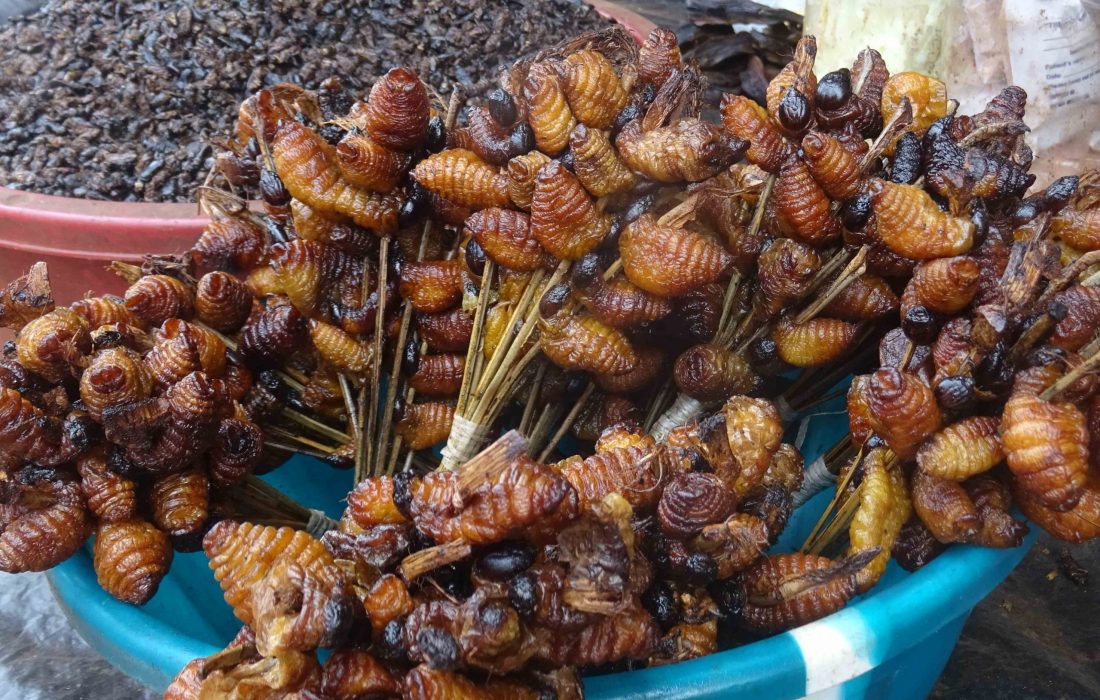 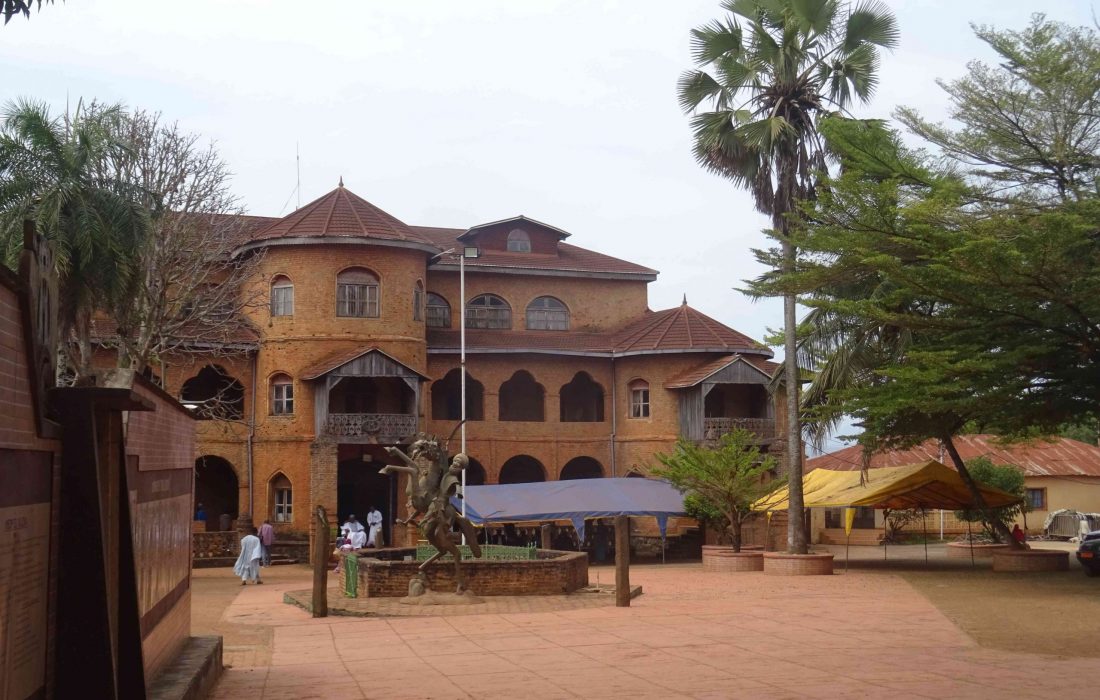 We left the rare luxury of electricity at least for most of the day and a bed, to continue cycling in the hilly region. Suddenly, a truck with German license plates overtook us and a woman waved at us form the window. In the next town, we had a nice exchange with the friendly couple from Austria. They are already around ten years on the road and experienced many things with their home on wheels. It was nice to talk to like-mined people and compare our adventures.

In Bafoussam, we turned in the direction of Yaoundé instead of Douala. After sunset, we searched for a village chief. When we arrived in the palace grounds, there was nobody around and the people we found after some searching did not really care about us. After some time, the chief arrived and said we cannot stay here, when we asked if it was possible to pitch our tent somewhere.

His chauffeur wanted to drive us to the next village instead, since it was safer there and the chief over there welcomes guests. Therefore, we packed our equipment on the pick-up truck and stood on the loading area, to be sure that nothing falls off the vehicle. Since we were higher than 1600 m, we felt cold during the ride and had to hold on to the car tightly, because of all the potholes.

When we arrived, the ruling king received us in a friendly way and offered us an aperitif. He had many guests and therefore developed his palace for tourists. He offers beautiful rooms and his palace is decorated, rich in detail and filled with traditional handicrafts. He offered us a room and during diner with wine in his luxury house, he told us about his visits in Switzerland. 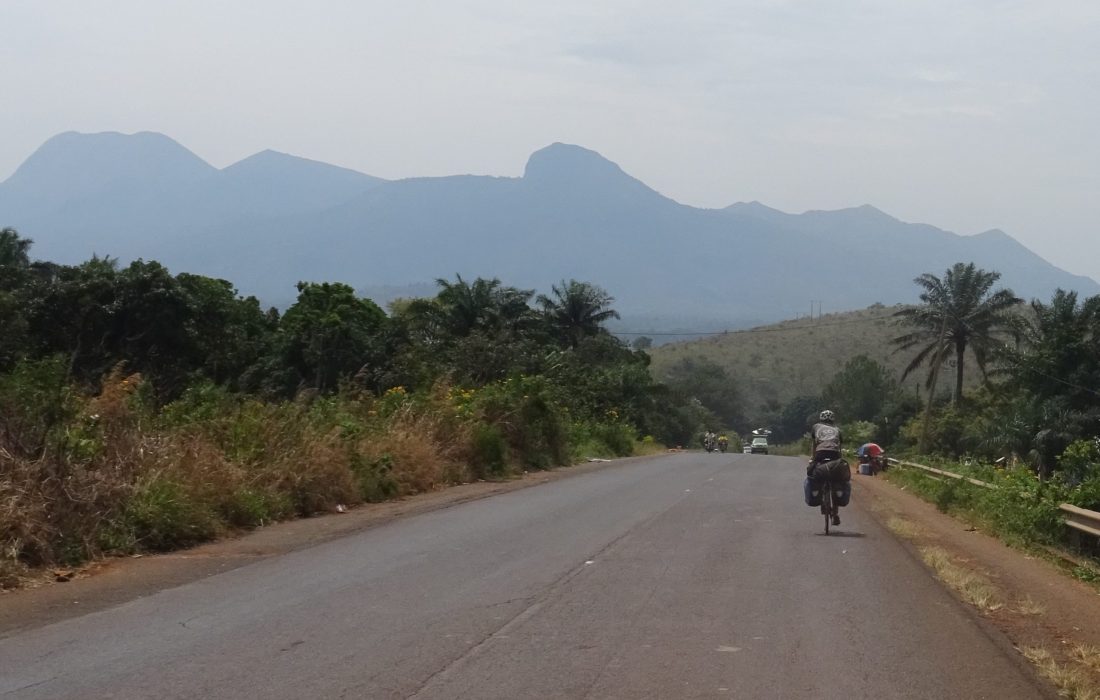 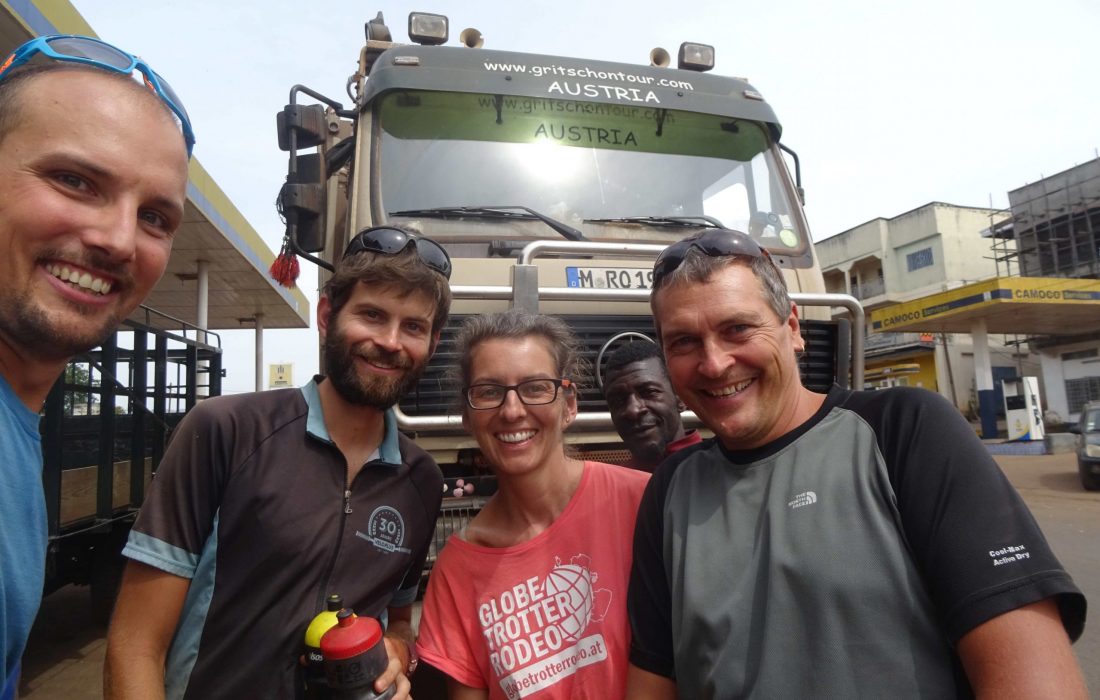 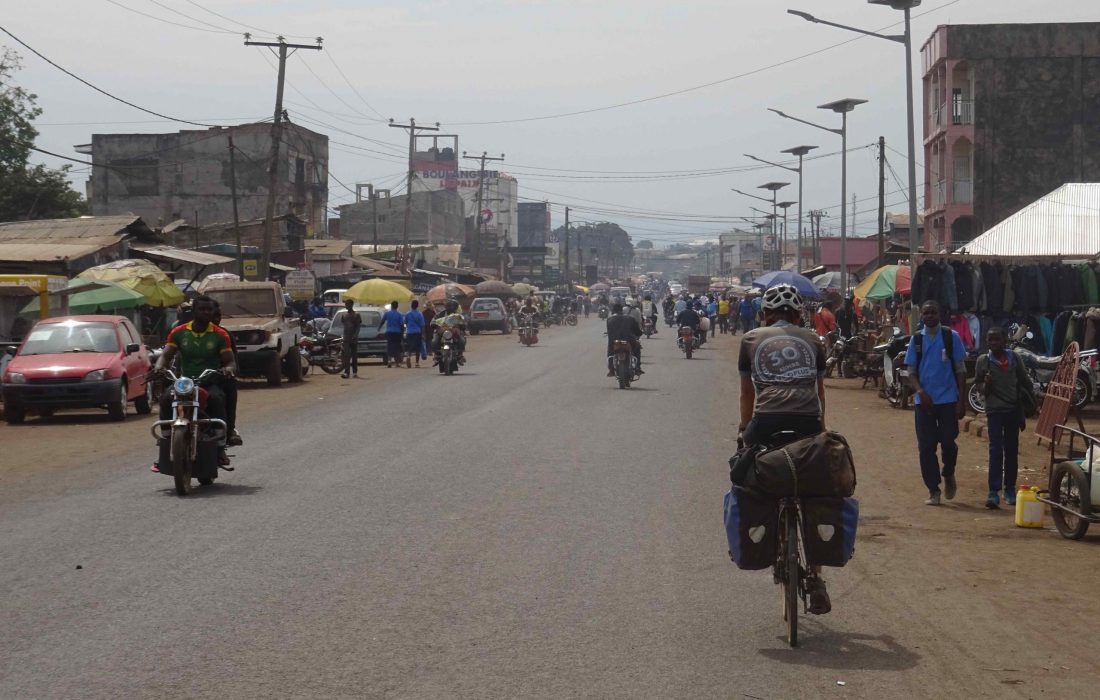 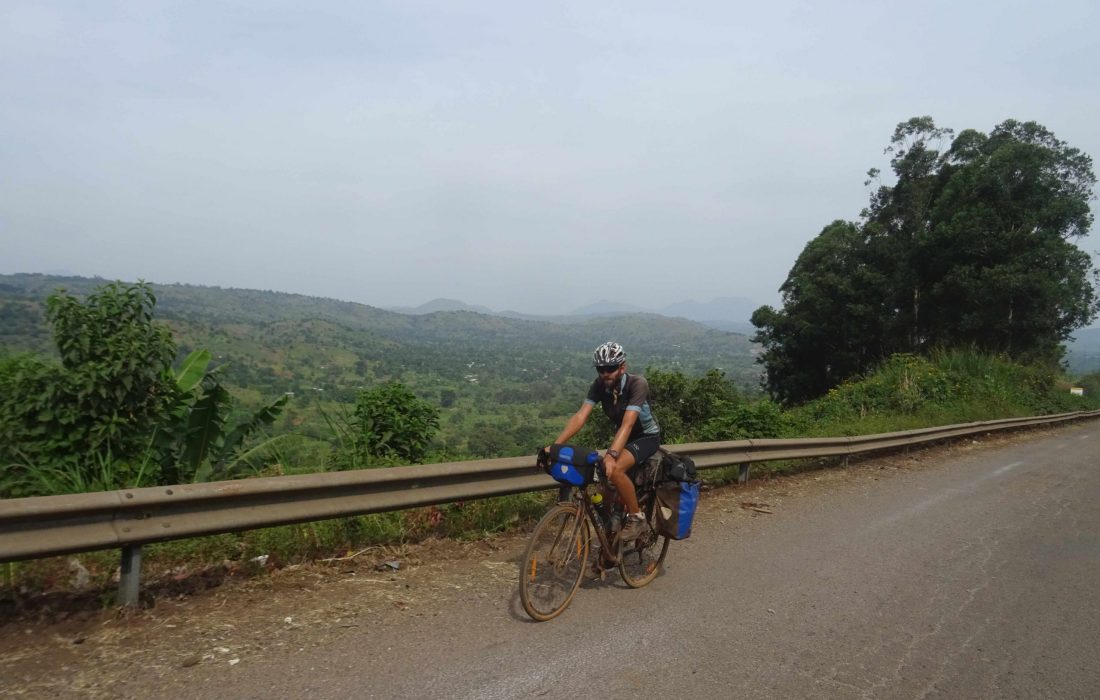 When we wanted to continue, the employee of the king told us that we needed to settle the bill. We were shocked and asked what we needed to pay for. He said for the room. Since we told the king that we could camp in the garden, we thought it was a nice gesture when he offered us a room instead. Of course, we would have refused the room, but apparently, the language barrier led to this uncomfortable situation. We explained that we do not have enough cash with us and therefore cannot pay.

Back on the holey road, we descended steadily and the air got more humid and hotter. Soon, thick forest surrounded us again and we definitely left the mountainous landscapes and the coniferous forests behind us.

Since we crossed the border, we asked many people about the security situation. All of them said there were no problems and we had the same feeling. In addition, there were no more vigilantes and therefore we tried to sleep in the wilderness again. 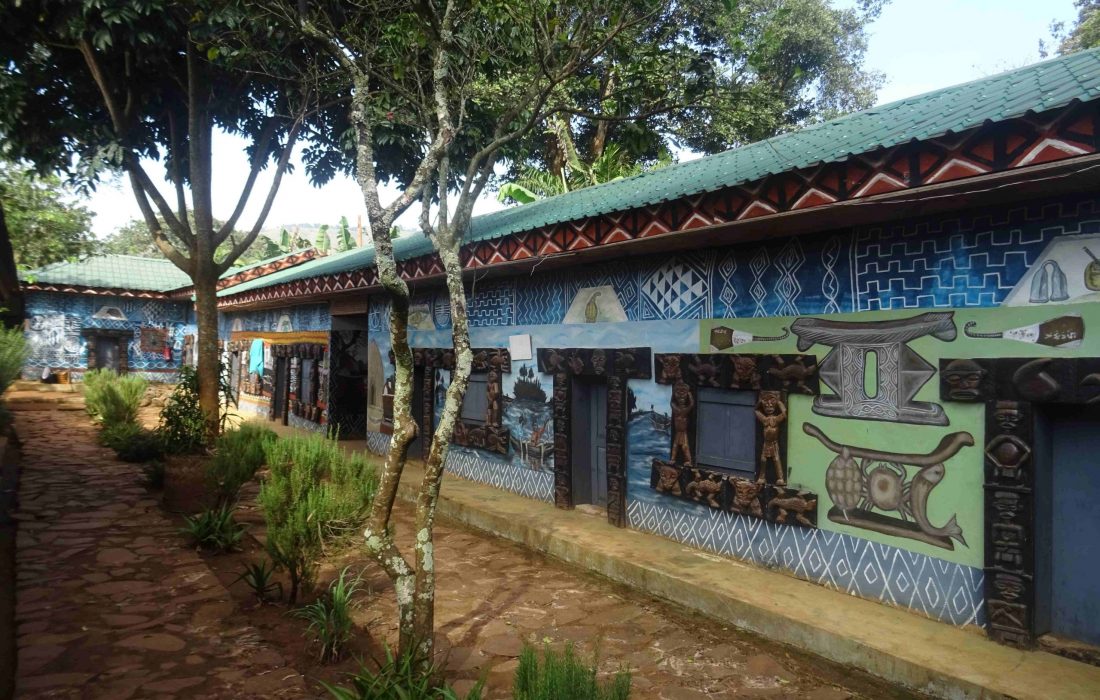 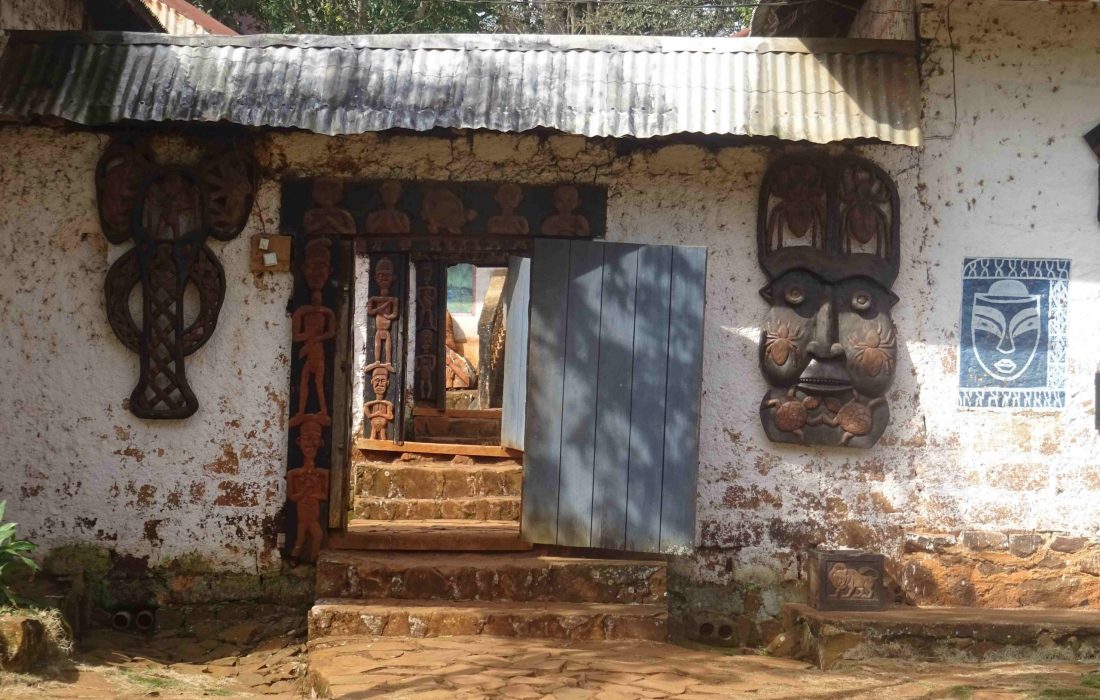 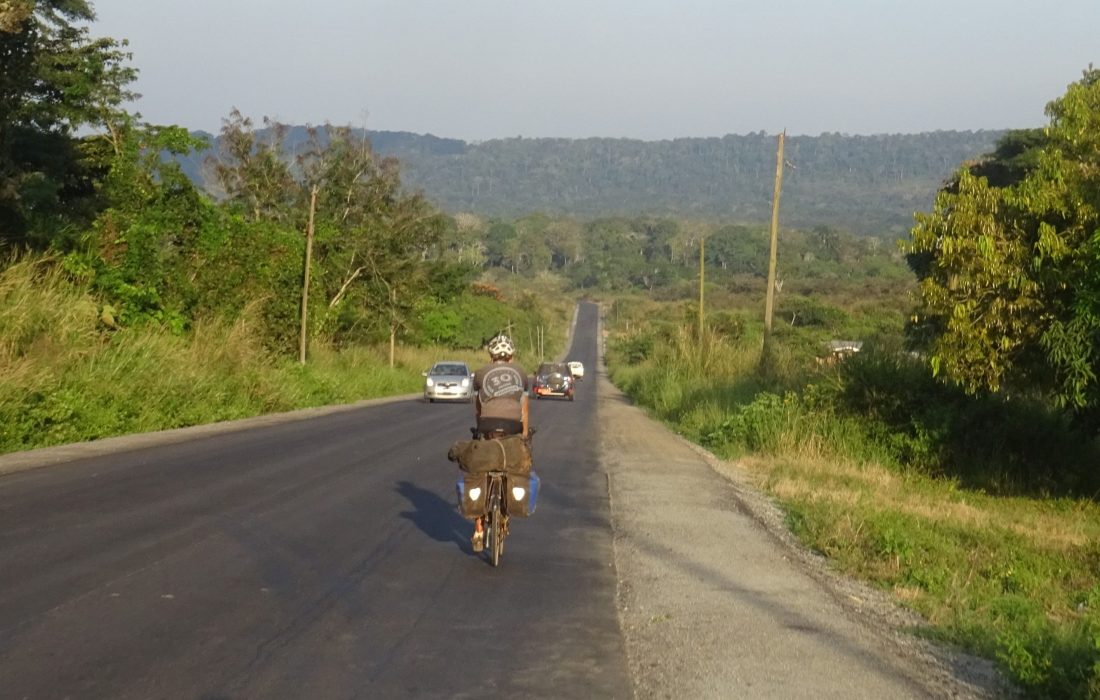 In Nigeria, certain children or women treated us, as we would be something better and even bowed to us in some cases. In Cameroon, this is different and sometimes, we almost feel strange, since people are less interested in us.

However, the surprised faces did not change when we tell people that we love African food and eat nothing else all day long.

In Cameroon, the families, with the exception of the kings, are rather small in comparison to the bordering country and therefore the population is many times smaller as well. Nonetheless, we see hundreds of kids daily walking their long way to school in their pretty uniforms. 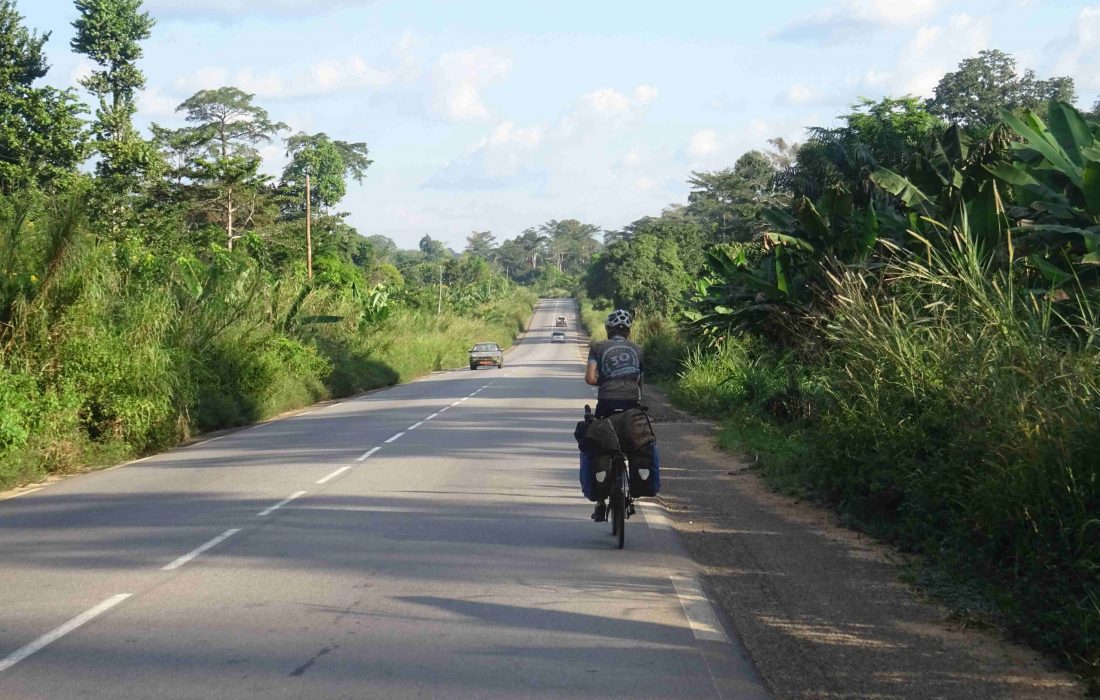 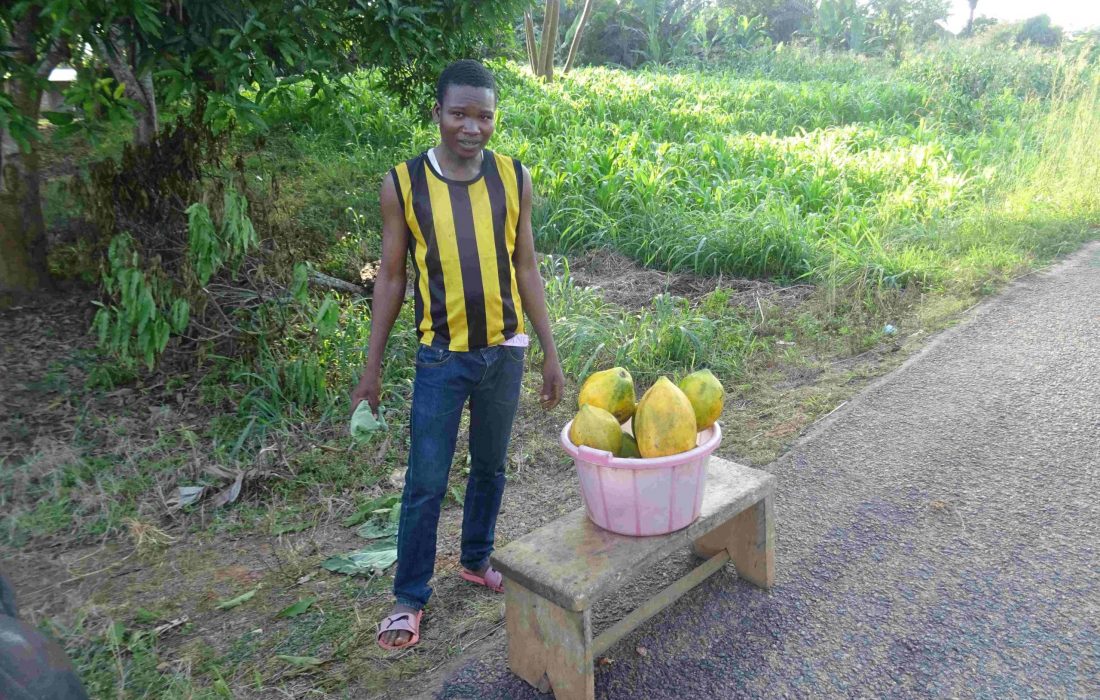 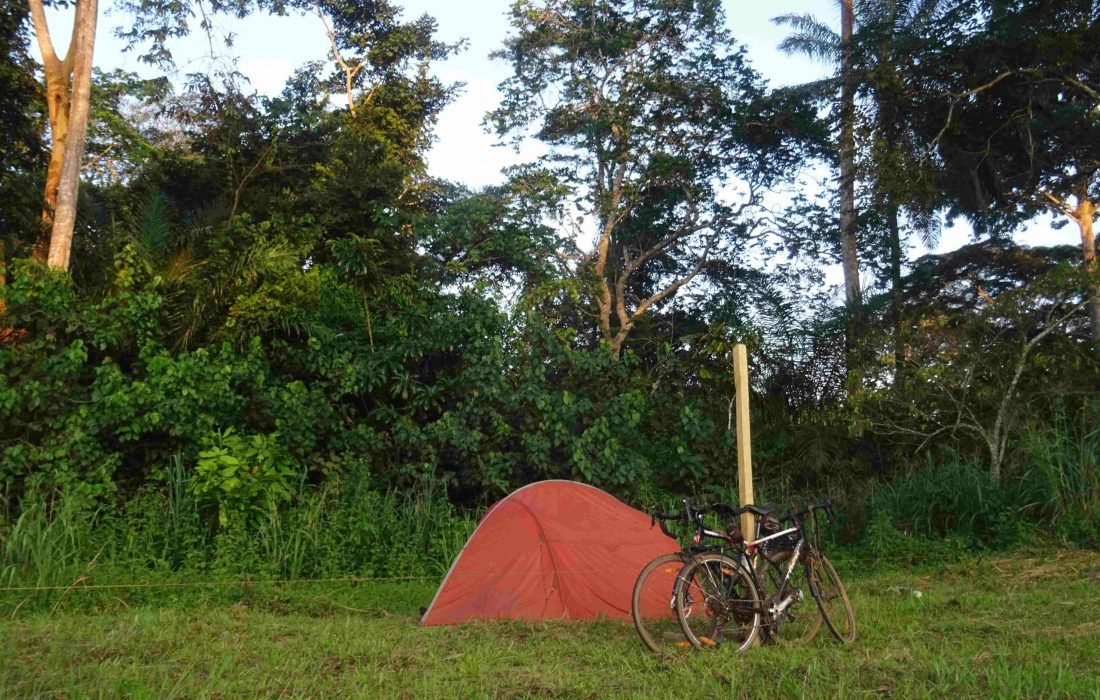 On the journey to the capital, we saw many times, like in previous countries that people dried their harvest on the road. We saw cacao beans, chili peppers, cassava roots and peanuts.

On the side of the road, men and women sold many different fruits and we could not abstain from buying some papayas. The price for three huge specimens was only 50 Euro Cents!

In Yaoundé, we quickly found the house of our host and he welcomed us warmly. Jocelyn lives already four years in this large city and works as a teacher at a French school. We had nice conversations with him and his friend David about the life in this Central African country and enjoyed some beers. 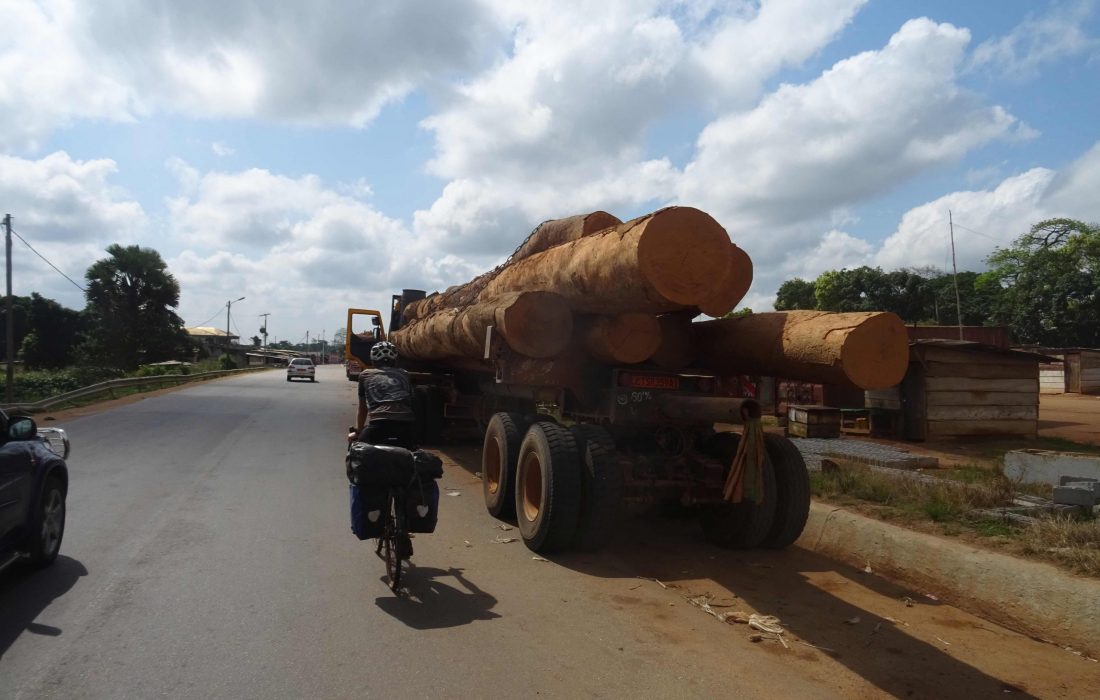