Until we were ready to continue, the small borders town was already lively. Everywhere were women walking around with some baked goods on their heads. In addition, there were a few overloaded cars and motorbikes next to the road and the passengers discussed wildly gesticulating about some prices.

To exit Sierra Leone successfully, we had to visit three different offices and answer almost the same questions three times during 30 minutes. Finally, we traversed the river forming the border and were excited to get our first impression in Liberia.

The first order from the uniformed officials was to wash our hands with cold water from a container. Without soap of course! Therefore completely sterile, we had to visit four different offices, to get our entry stamp. The behavior of the responsible personnel, their uniform and the flag of Liberia strongly reminded us of the USA. Later, we will go into more detail in the interesting historical background of the country.

Several strong downpours, we awaited in different shelters, to continue later with weak rainfall. Quickly, we realized that the Liberians are more restrained than the people have been in the last weeks in the neighboring country. A family gave us, a bit hesitated, a room in their simple house, so we were at least not exposed to the strong rainfall. 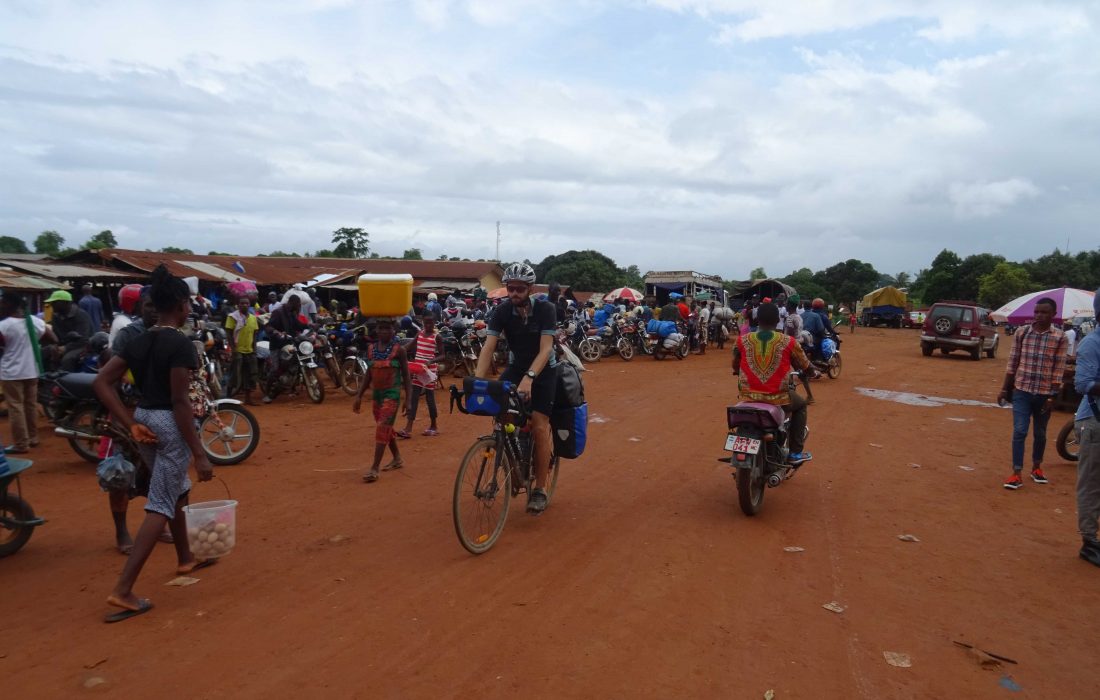 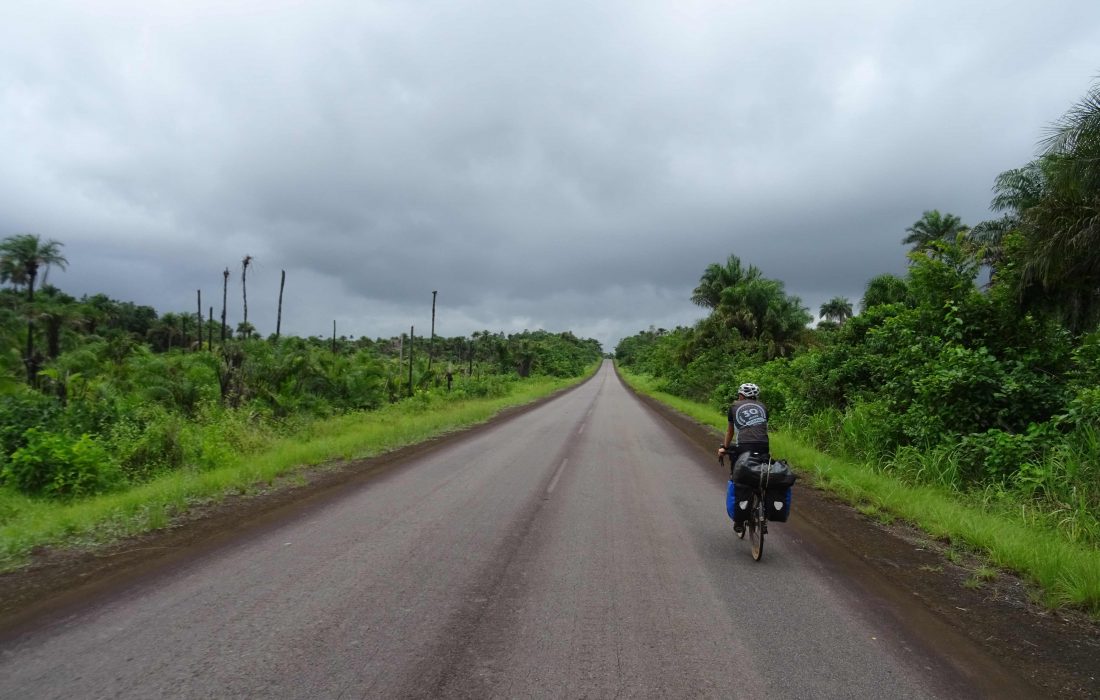 The landscape did not change greatly since we crossed the border. The only major variation were the large palm oil plantations. Because of a miscalculation, we were closer to the capital than we thought and therefore did not give notice to our Couchsurfing host Emmanuel. Luckily, he took our message with African calmness and said it was no problem.

Emmanuel and his teacher friend walked to the house with us and both tried to cycle with our loaded bicycles more or less successfully. The niece of Emmanuel cooked immediately for us and in a couple of minutes; we knew all of the inhabitants of the house. 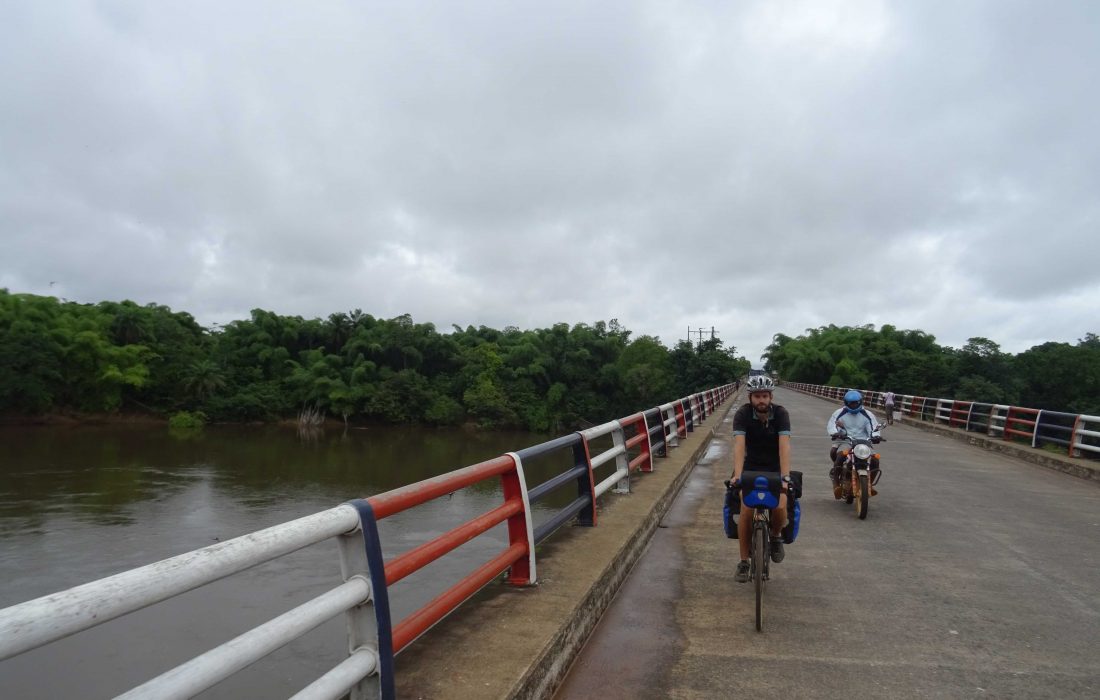 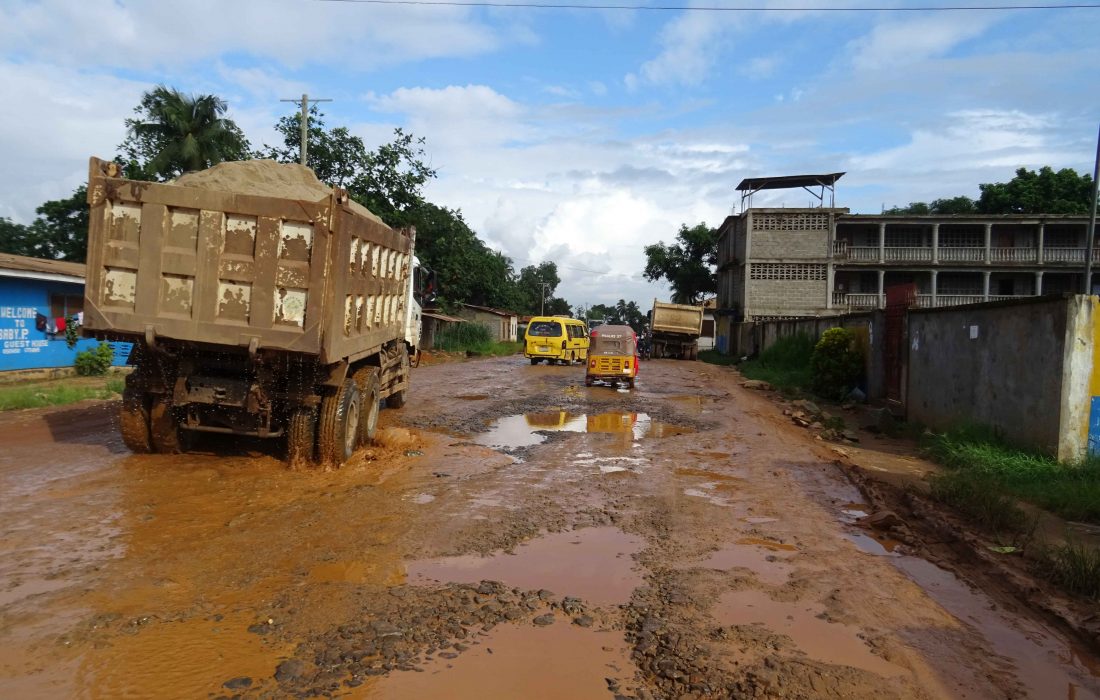 Two Chinese women arrived after us and we met them the next morning. They are already eight months on the road and met randomly during their journey. Equipped with primary school English and nonexistent French knowledge, they managed surprisingly well. 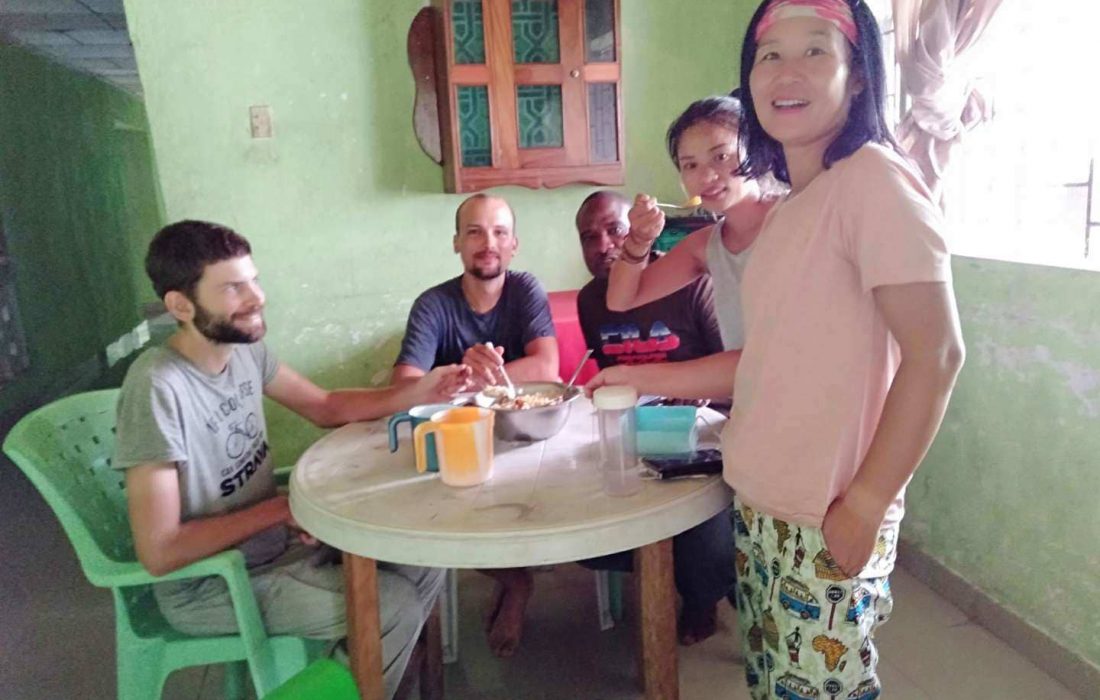 Despite non-excessive cycling days, we both were extremely tired and slept a lot the next few days until we felt energetic again. Unfortunately, most men in Africa do not have a fixed job, therefore linger around their house all day, and discuss about what would be possible with money or a ticket to Europe. In Europe, many people think that Africans are lazy per se, but after six months, we can definitely deny that statement. Emmanuel for example works for three different schools as a teacher and visits lectures at the university at the same time, to get his masters diploma. Recently, the government cut the salary without a warning. Emmanuel continues to work as a teacher, since he does not want the children to get a bad education.

From the beginning, he told us that he usually provides a balanced diet, but now he has not sufficient money for that. Of course, we would buy our own food anyway. In addition, for us it is already normal to eat rice without any meat three times a day. 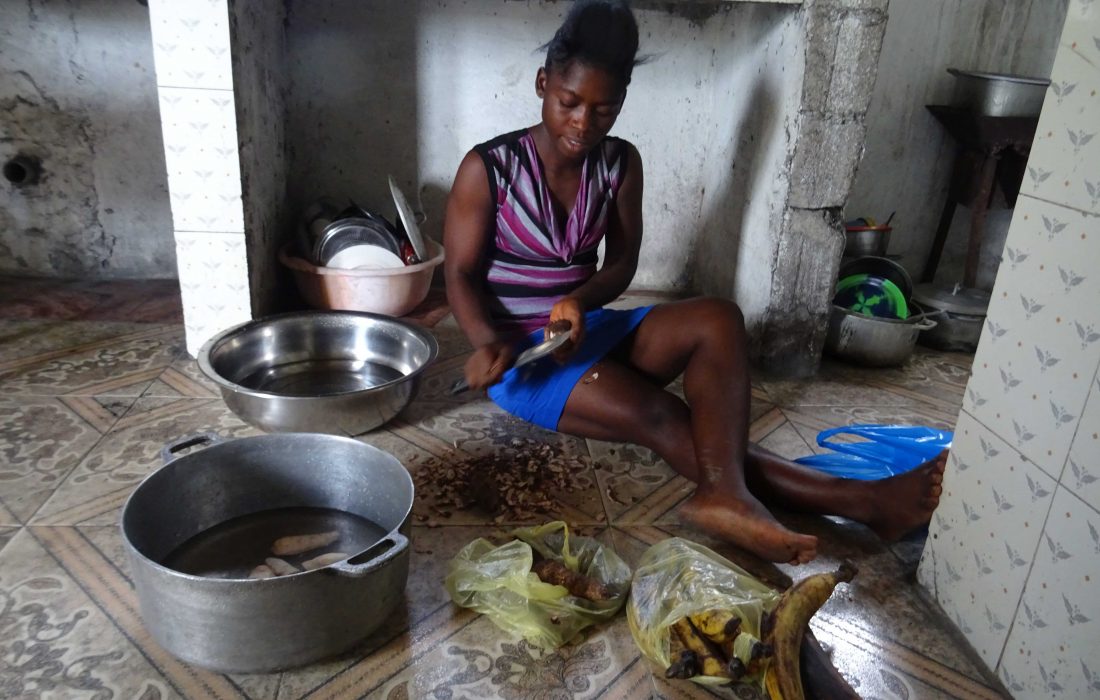 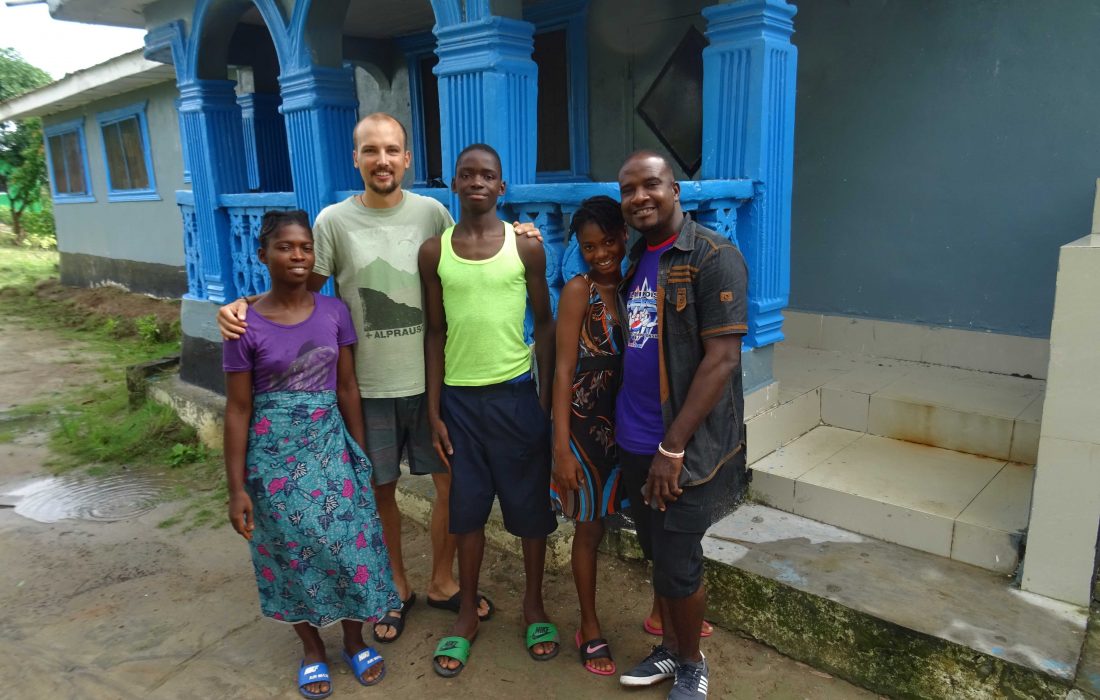 After a few days, we said goodbye to Emmanuel and his family and attempted the more than 20 km to the city center. The ride into the largest town of the country was no bed of roses. The yellow painted “kekeh” (three-wheeled taxi famous as “tuk-tuk”) dashed honkingly passed us and at the same time we had to take care of the potholes and the many people on the road. 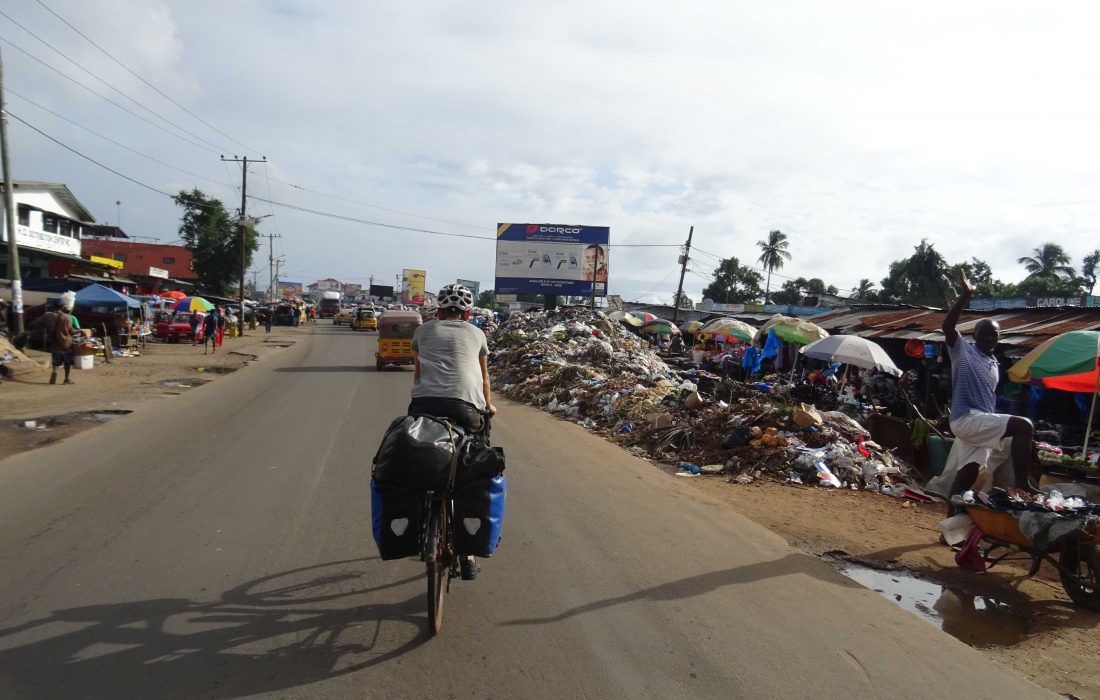 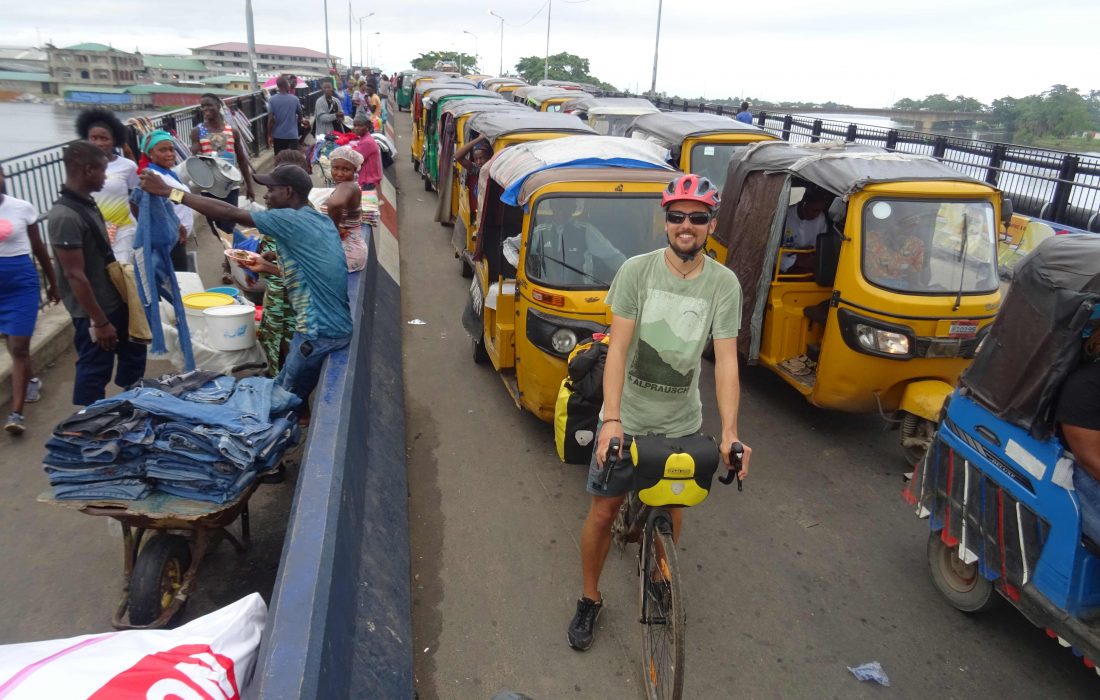 Before Tom finished work, we ate in one of the many street food vendors a local rice dish. Tom, a Belgium engineer who is the only Warmshowers host in the capital, lives directly in front of a grubby, rundown settlement close to the beach. In contrary, his compound is equipped with a swimming pool, security guards and a huge wall. During our stay, we enjoyed the calmness, our bed, the warm shower and the possibility to wash our clothes. With the current humidity of more than 90%, nothing dries perfectly and we have to be careful that nothing starts to mold. 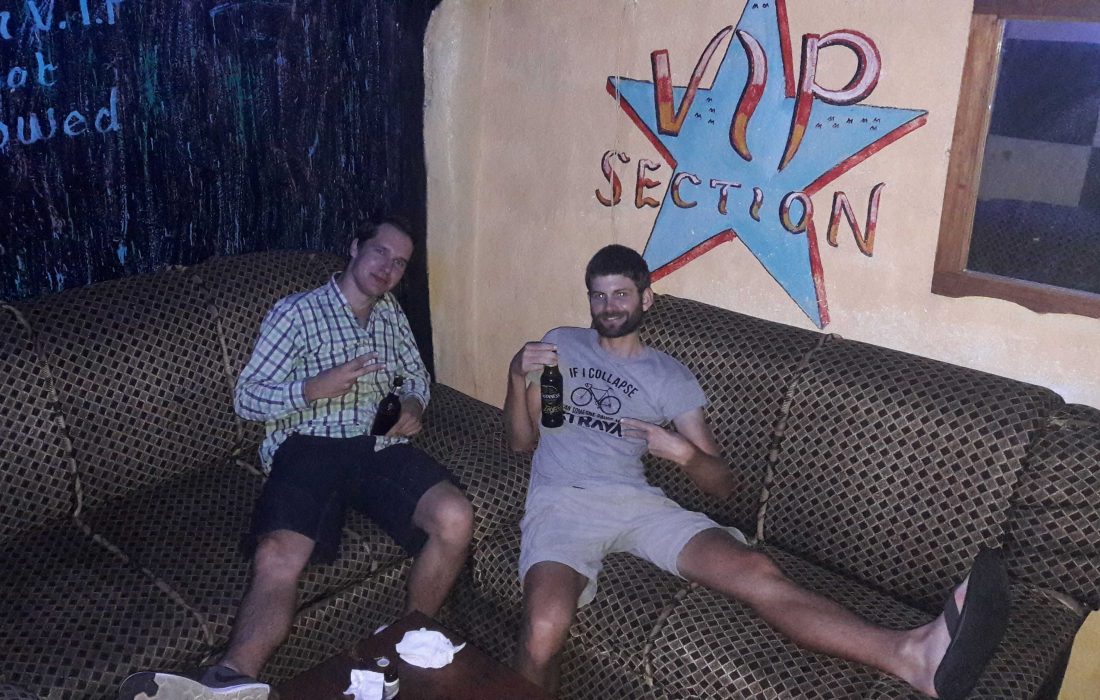 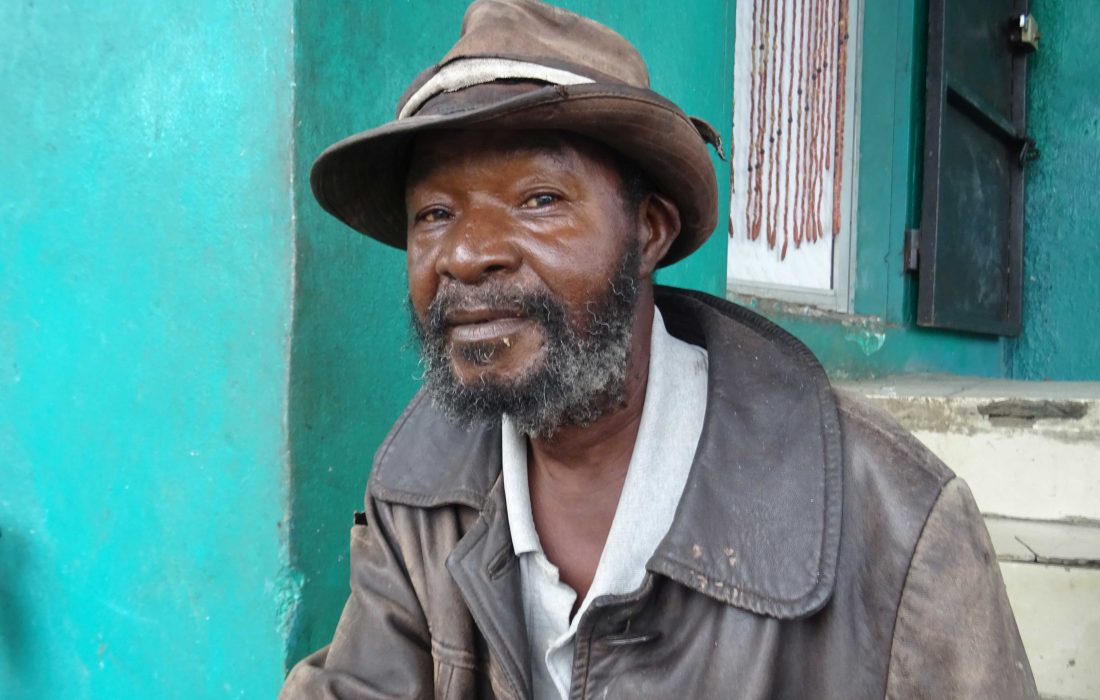 The Ducor was one of the luxurious hotels in Western Africa when it opened in 1976. The former Libyan political leader Gaddafi financed the construction of the hotel. The hostel closed shortly before the outbreak of the civil war and nobody ever used it again since 1989. When we entered the property on a small trail on the highest point of the city, two security guards called us and wanted money for visiting. Amused by the fact that there are security guards for such a rundown building and one even has to pay for it, we could not take them seriously. Later, we heard from some older locals, that the security is responsible that nobody can steal iron form the hotel complex. In addition, the Americans blocked all attempts to renovate or sell the hotel with annual payments to the government, since the American embassy lays directly below the hill.

Finally, we sneaked to the building from behind using a detour and had to be extremely careful to not step on the used diapers and piles of shit everywhere. The locals misuse the hotel surroundings as the toilet of the neighborhood and the waste collection. Luckily, we could sneak on top of the roof without anyone seeing us. This adrenalin releasing action will be in our memory for a while.

From the top of the hotel, we had a stunning view on the city and the township West Point, which inhabitants approximately 75’000 people and is therefore completely overpopulated. The largest problem is that all of those people use the former beautiful beach as a toilet, since there are only 4! public toilets for all of them. In addition, people try to survive with the help of prostitution and selling drugs, which adds up to all the other diseases the slum already has to tackle. 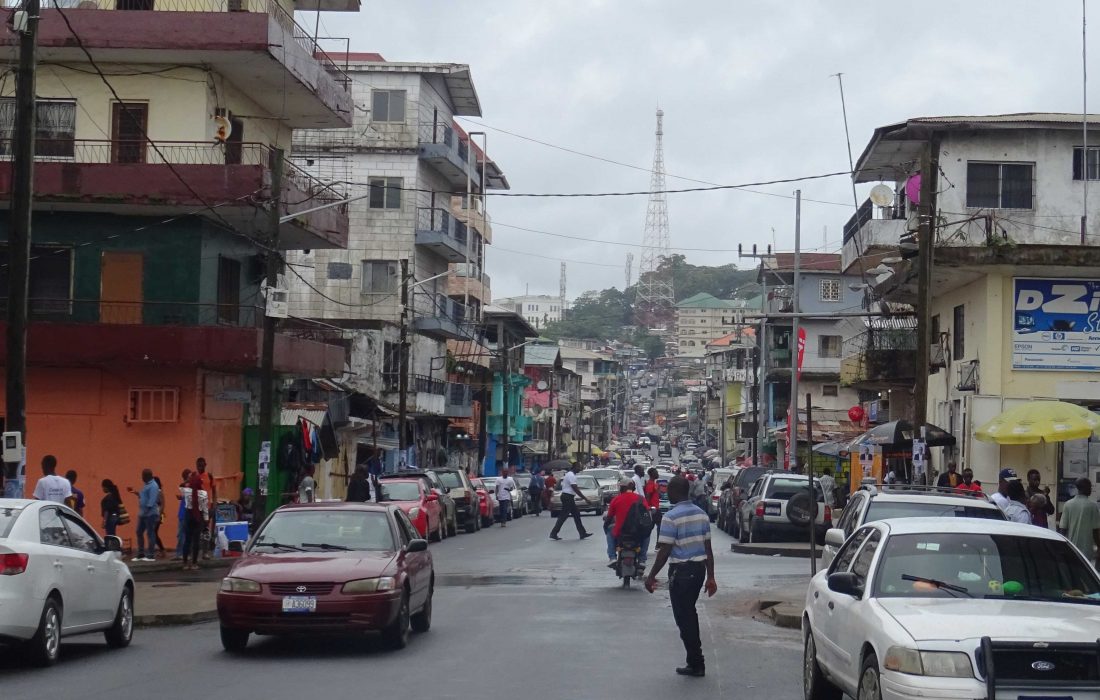 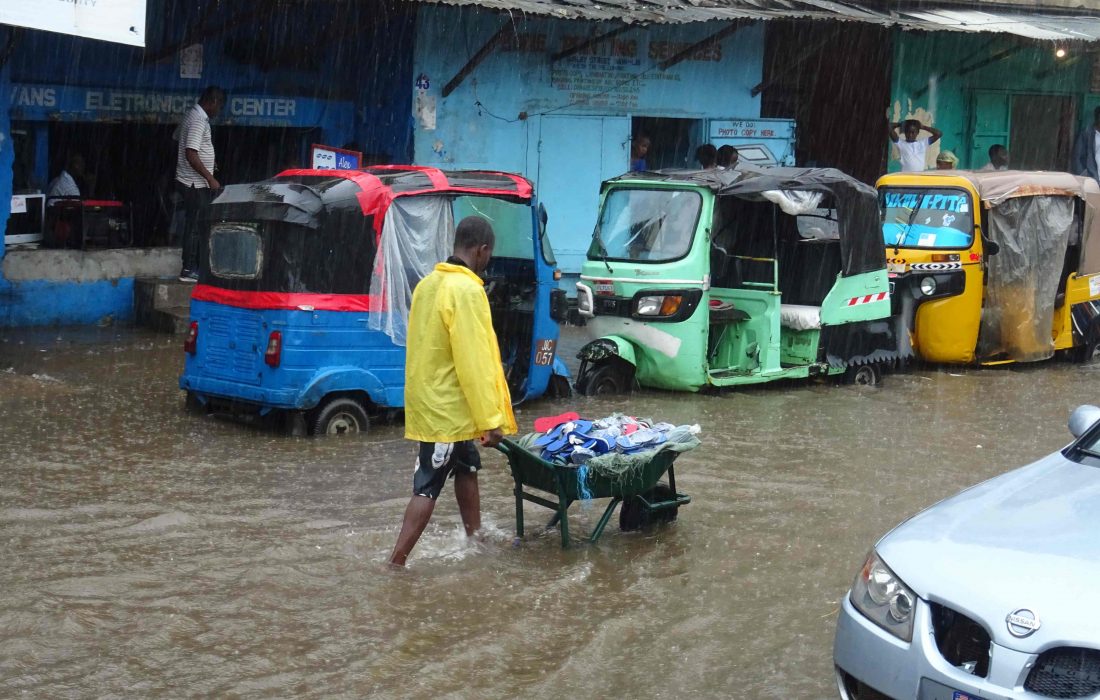 Sadly, even in the city center one can see people urinating everywhere, since there is no other option available. When there is a heavy rainfall, like there are many during the rainy season, complete quarters are flooded, since the rubbish laying around clogs all the runoffs. When we had a reunion with Nico, who fortunately recovered from malaria, we were stuck in a restaurant for some hours because of strong rain and flooded streets. 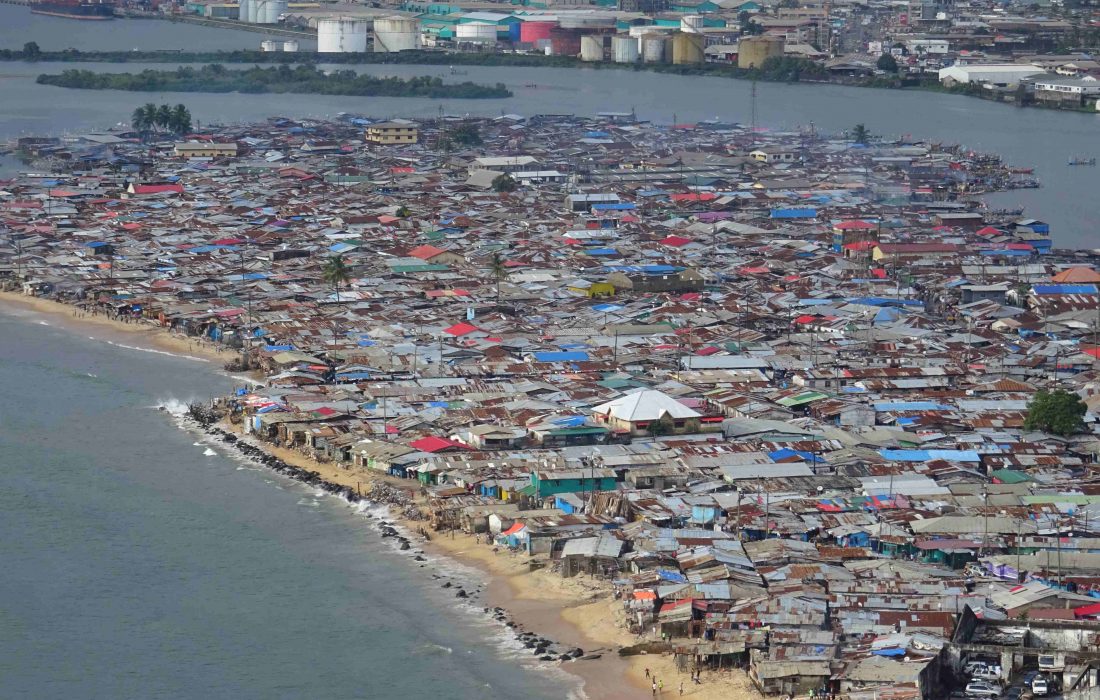 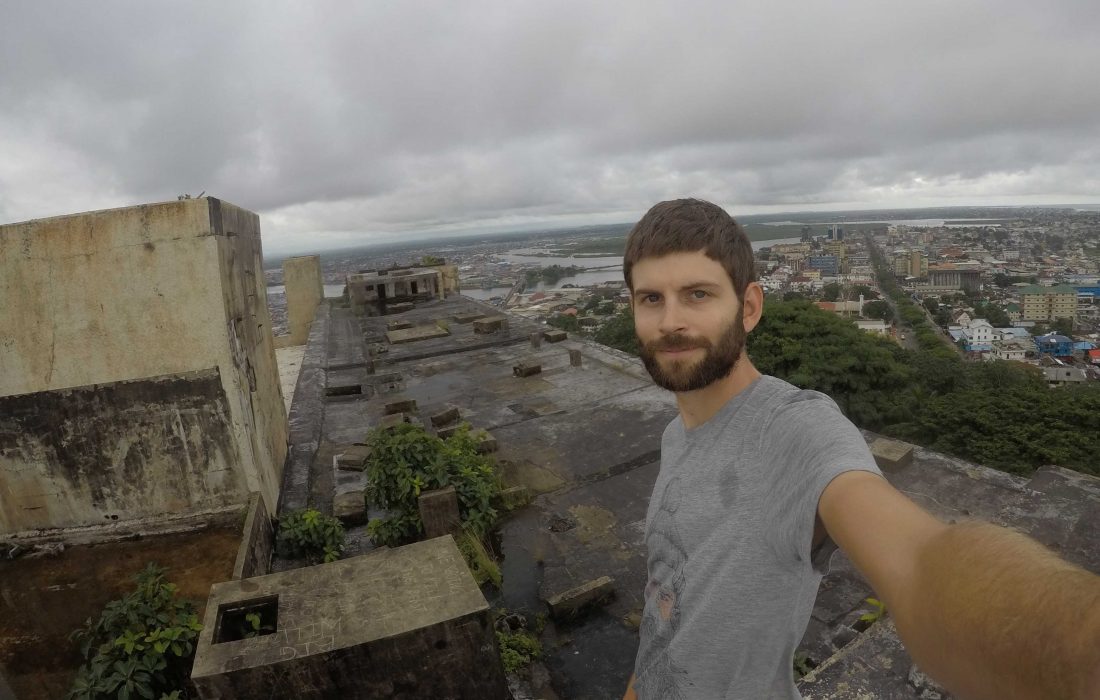 Directly after the arrival at Emmanuel’s place, Fabian got fever again and the malaria quick test showed another infection. Already after 24 hours, he felt much better. However, another test a few days later showed that the infection was not completely gone yet and an additional treatment including multivitamin tablets was necessary. Since we drink the not always clean African «tap water», we decided to buy an anthelmintic drug, to kill all potential nematodes and tapeworms in our bodies. 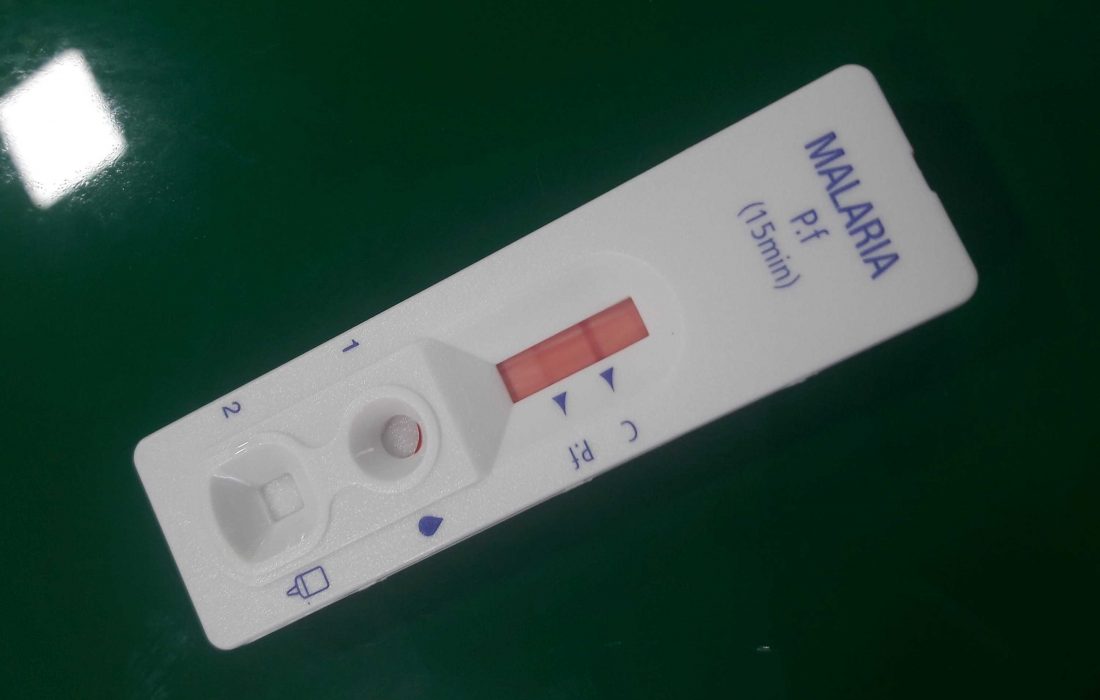