On the Angolan side was a similar chaos and we were glad to see the immigration building behind a gate. The friendly officials even spoke a bit of English and did their work efficiently. We were allowed to sleep behind the building. A bit later, the police came and tried to explain to us in Portuguese that they needed a picture of us, to send to the headquarters.

Using gesticulation we tried to exchange the rest of our Congolese money and a few Dollars into Angolan Kwanzas. Luckily, we found someone who speaks a bit of French in each village to help us with the communication issues.

In each village, the people gave us a thumb up and shouted “Amigo”. Especially the children were very energetic and ran after us. Most of the vehicles were converted motorbikes with a loading platform and they transported the famers from the fields back to the villages. This kind of vehicle is very popular in Asia and called “Tuk Tuk”. Here they are called “Keweseki”.

In the first city, we bought a SIM-card with some effort and internet data. After the border we had to cycle some gravel road again, but then we enjoyed the comfortable paved road. The hilly savannah landscape and the heat drained us and finally we could spend the night in an unfinished hospital. 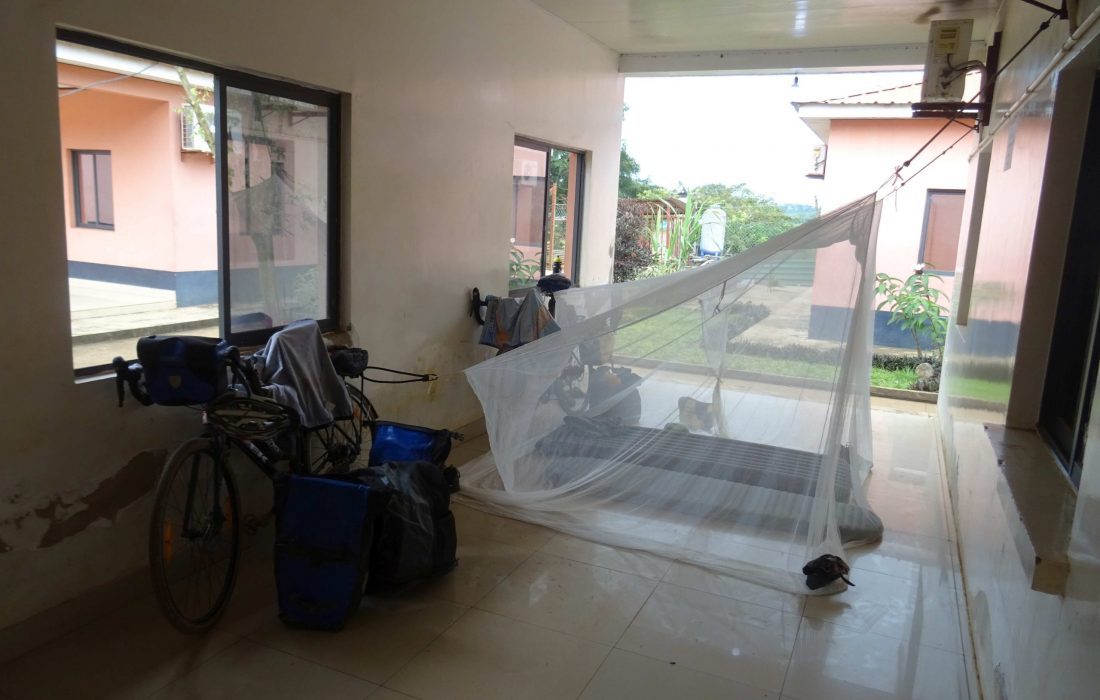 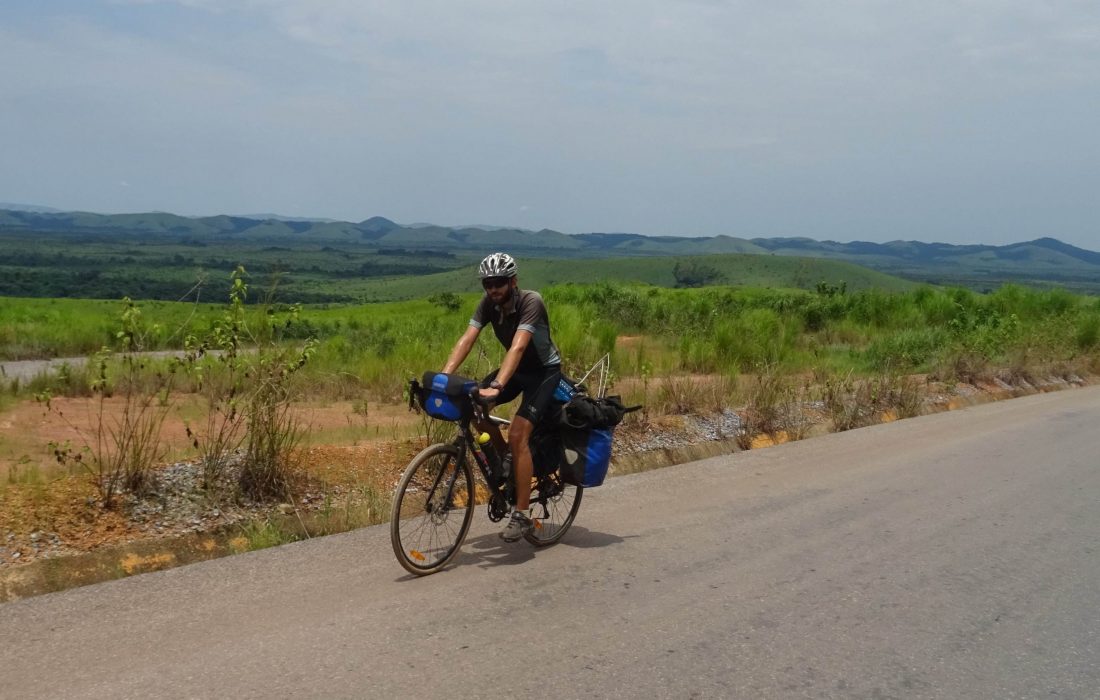 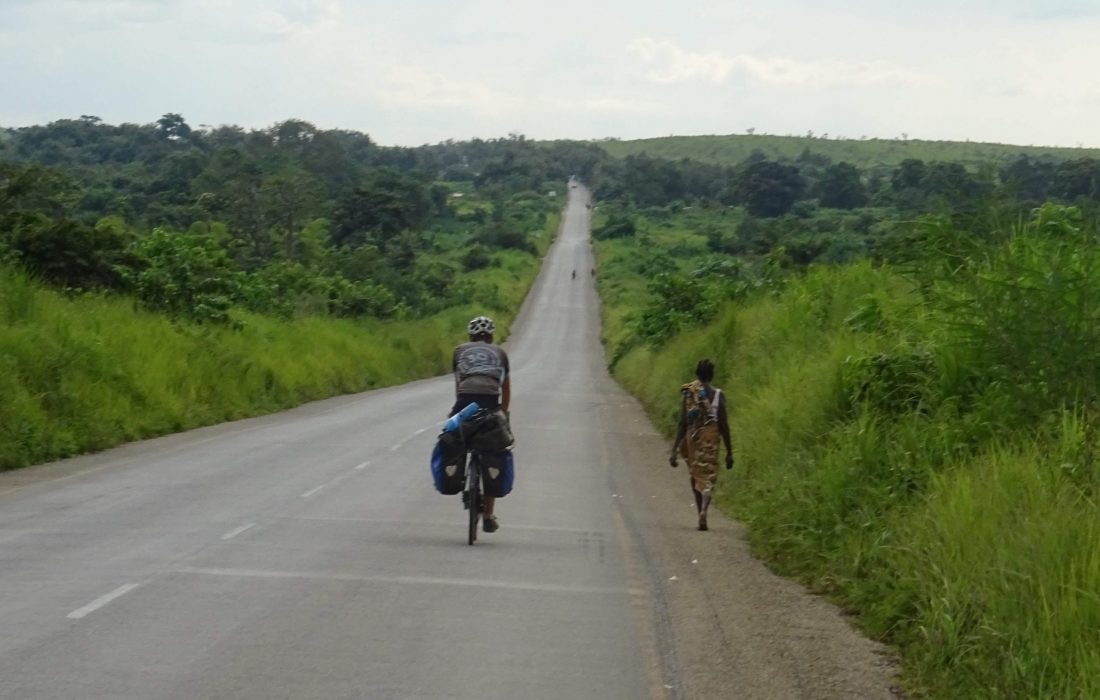 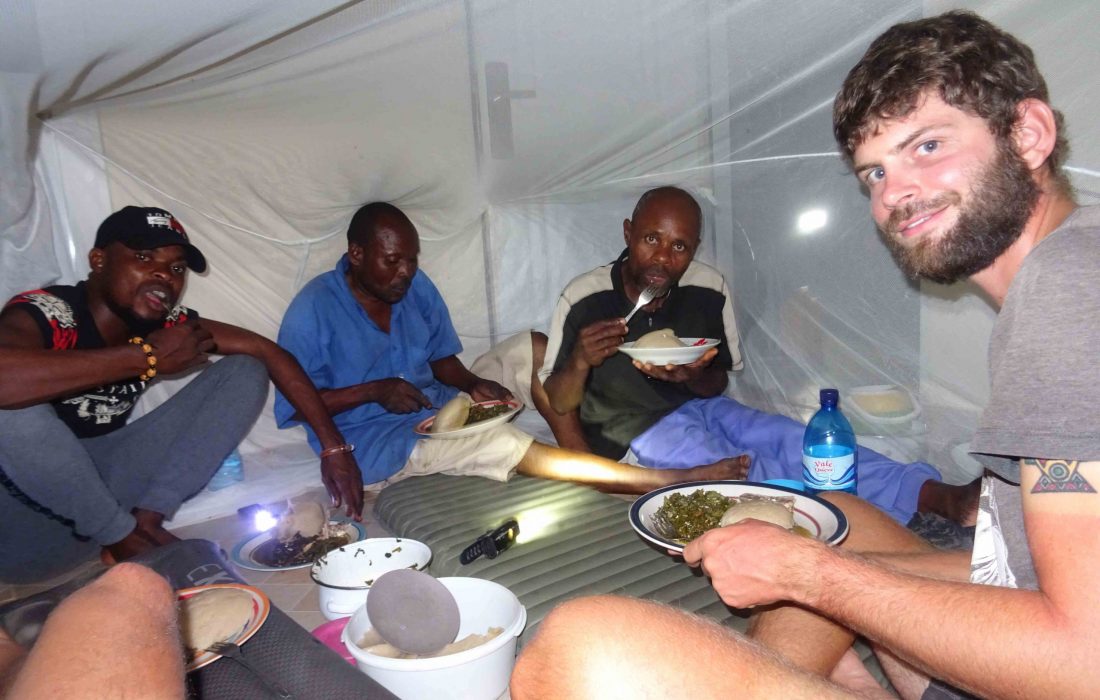 The only two men of the village who spoke French invested a lot of effort in preparing some fruits, manioc and sugar cane for breakfast. A few kids caught a small bird and held it as a pet. In the beginning, we joked and said that the bird will not get very old like that, since they treated him in a horrible way. An hour later, the bird was already dead and we heard that the children only caught the bird to later eat it.

The rain started and we were cold, since the many steep hills greatly accelerated our bicycles on the downhill. The rain did not stop until the evening and we asked a few teenagers, if they had a place for us. At the end, we could sleep in their living room.

Unfortunately, Adrian realized during the last kilometers that his free hub made problems again and we could not cycle far anymore until the drive train would not work at all. At least we could cycle 440km since we fixed the free hub last time. 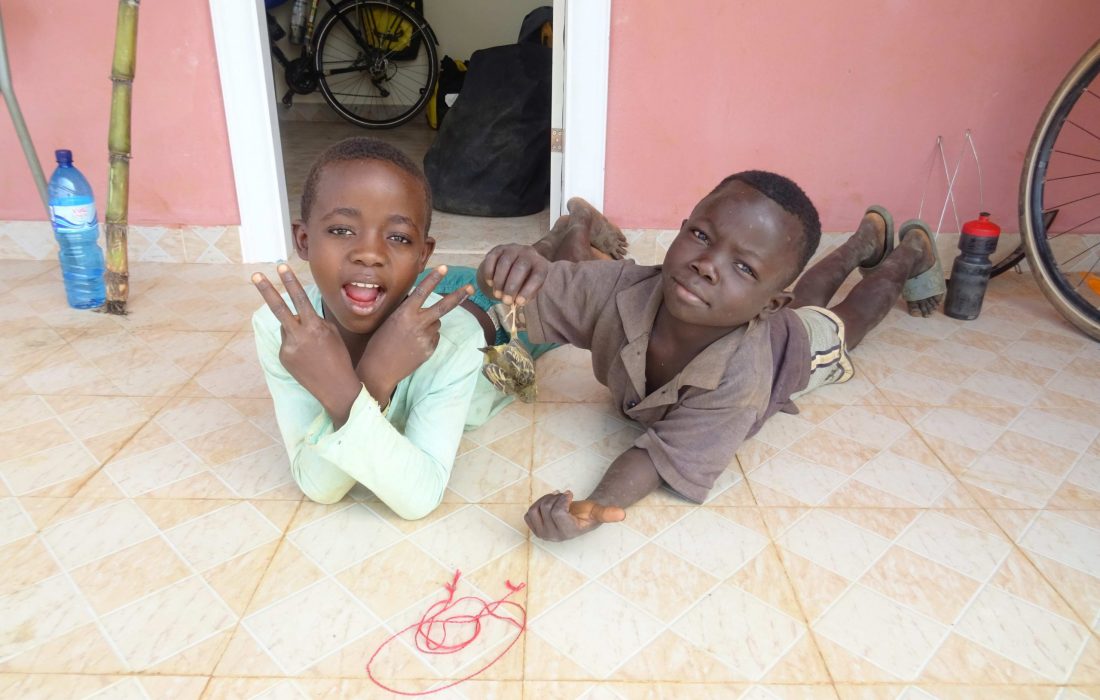 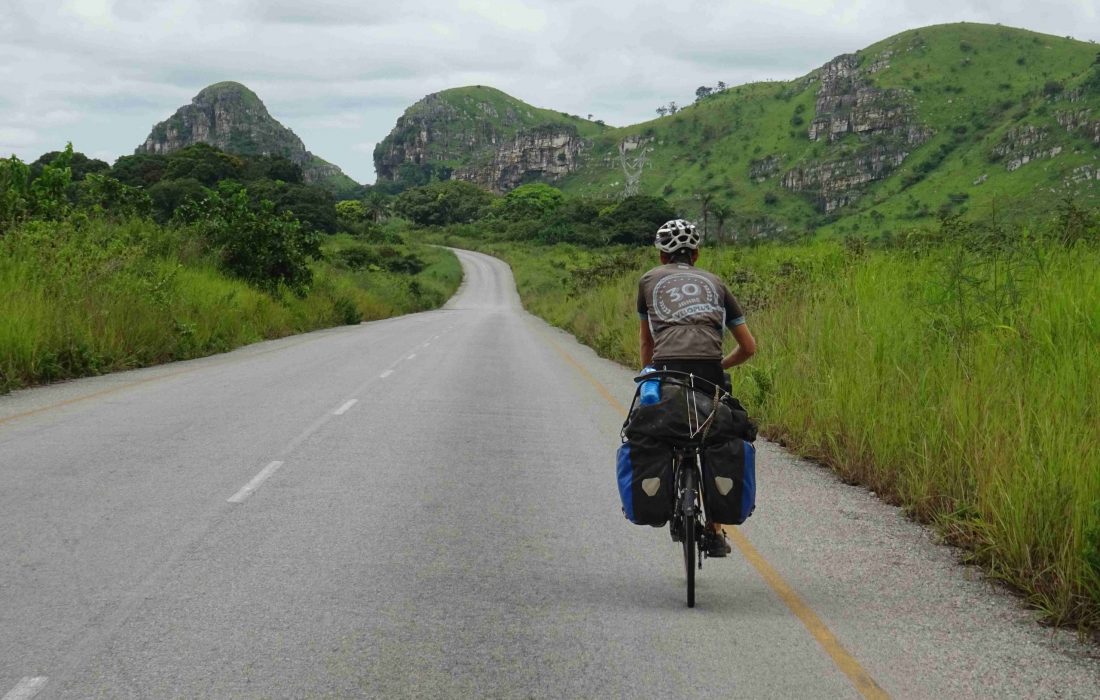 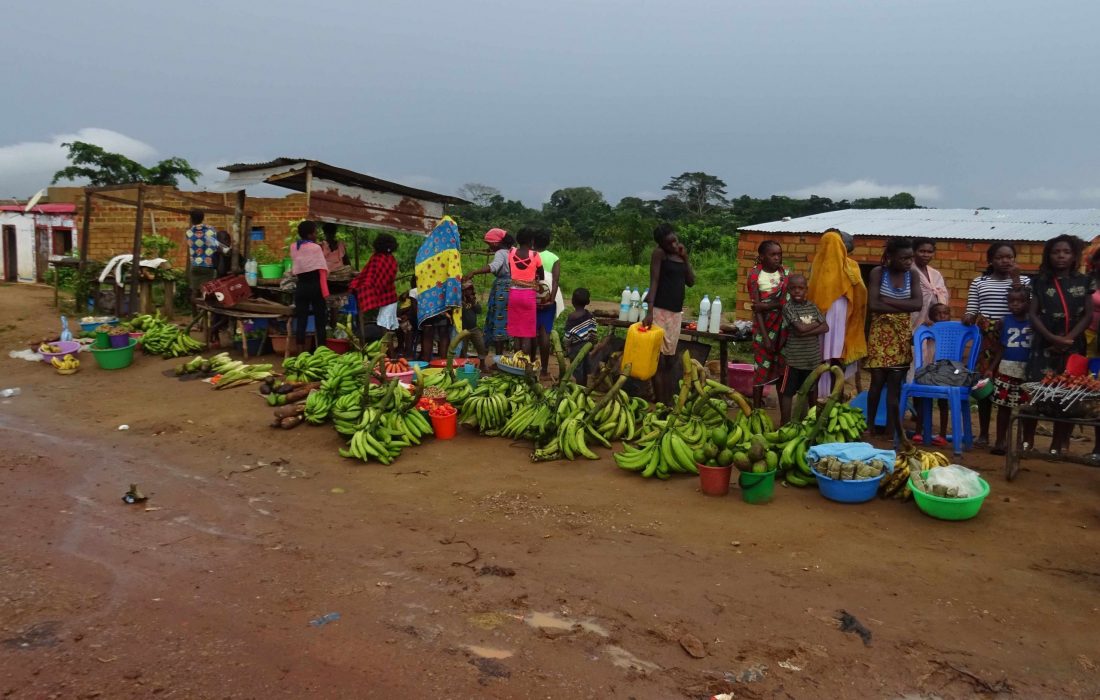 In the morning, we searched for a bicycle mechanic in the relatively large village, to open the free hub and eventually to clean it as well. Like that, we wanted to at least reach the coast. When we had this problem the first time in the Congo, we contacted already a few bicycle mechanics in Luanda, the capital of Angola. One of them said that he already found a spare part and we tried to find out if it was possible to send it to us.

Quickly, we found out that there was no bicycle mechanic in the village and a few motorbike mechanics helped us instead to open the free hub. They had to make a tool and could open the complex piece after a short amount of time. We cleaned the interior of the free hub and optimized the order of the small balls and the metal rings.

Like the talented mechanic already told us probably a few times in Portuguese, the drive train worked again after we reassembled everything. The only question was for how many kilometers, since it was still more than 400km to the capital. 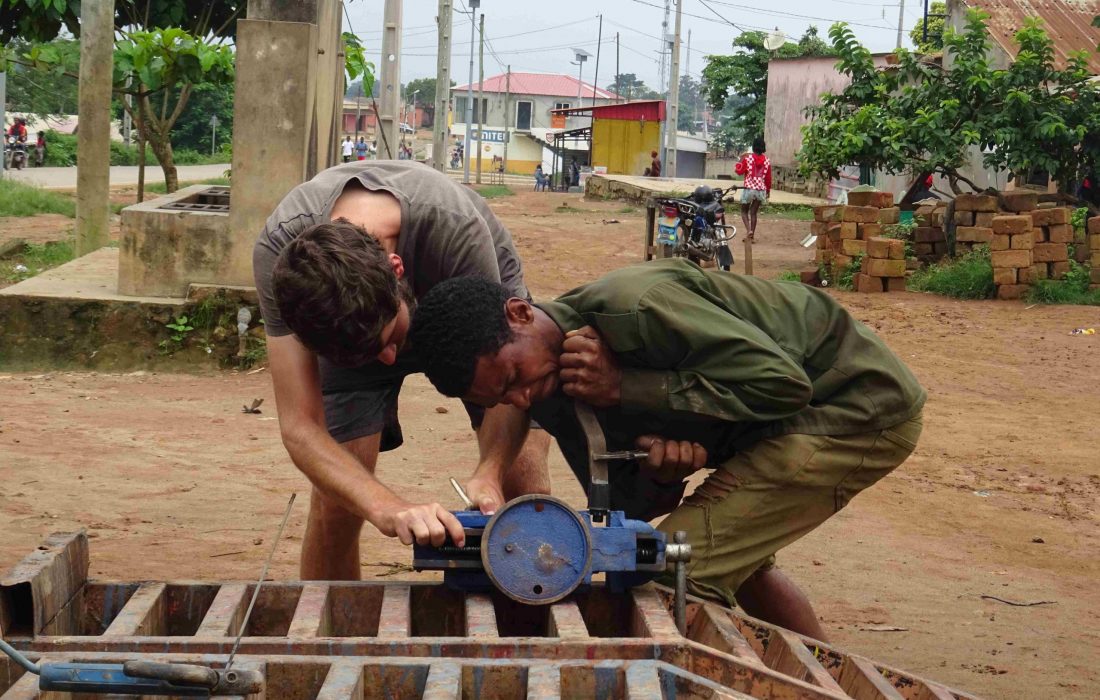 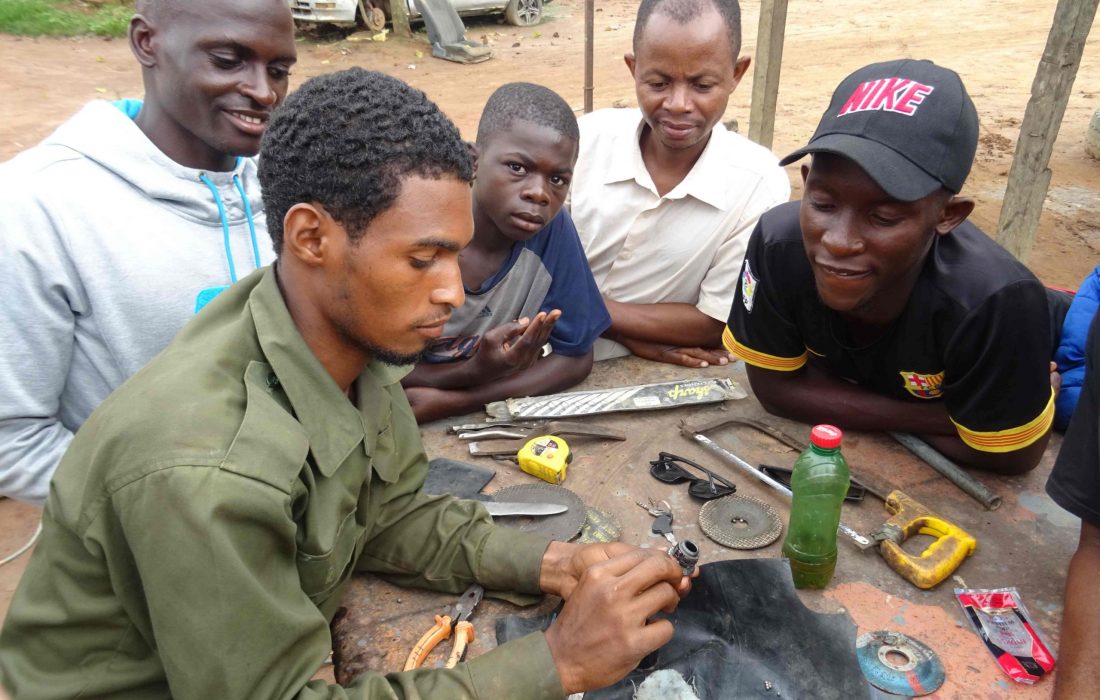 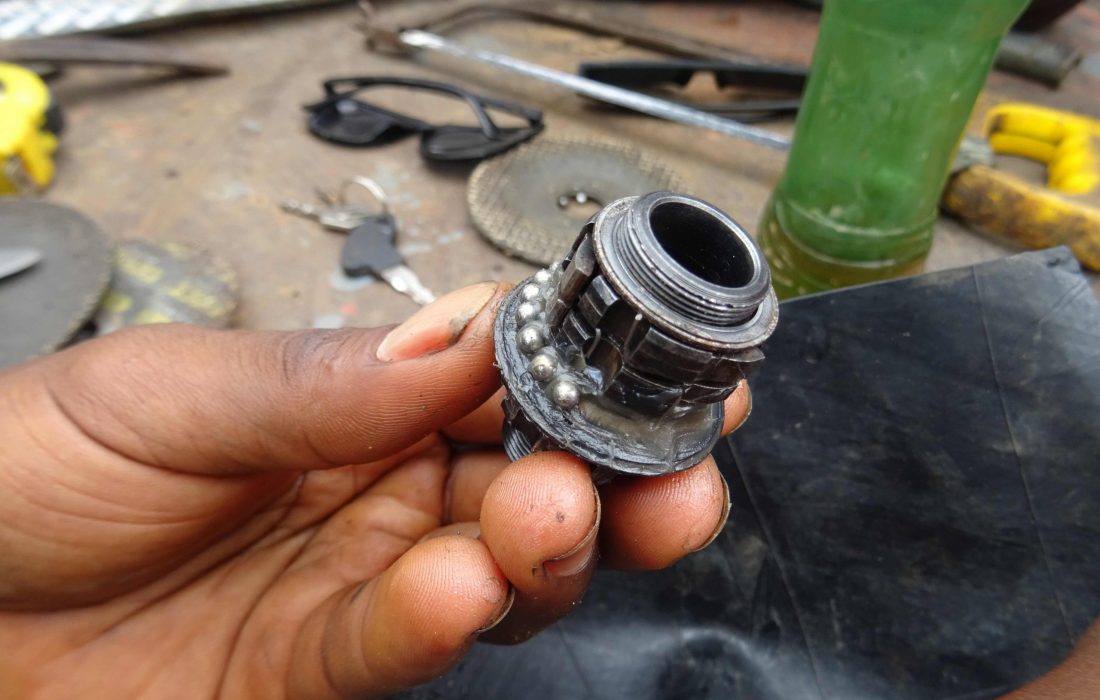 Therefore, we took the route down to the coast and made good progress, despite the late start. A heavy storm approached us and suddenly it came down in buckets. We were soaking wet in a few minutes. The locals who came back from their fields were happy despite the heavy rain and greeted us always with a huge smile. Sometimes we are surprised how these people are so happy with so little in their possession. After a long day at work in the fields, they return back to their scabby tin shacks, which mostly are not even completely water proofed and then have to spend their evening using a half-decent torch. 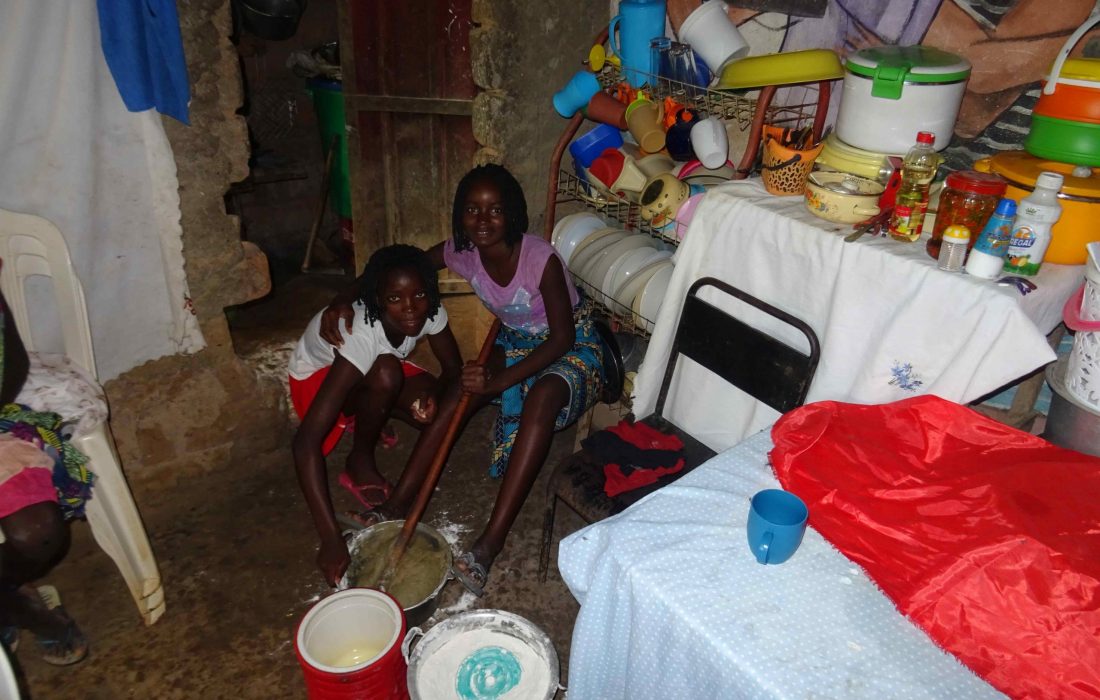 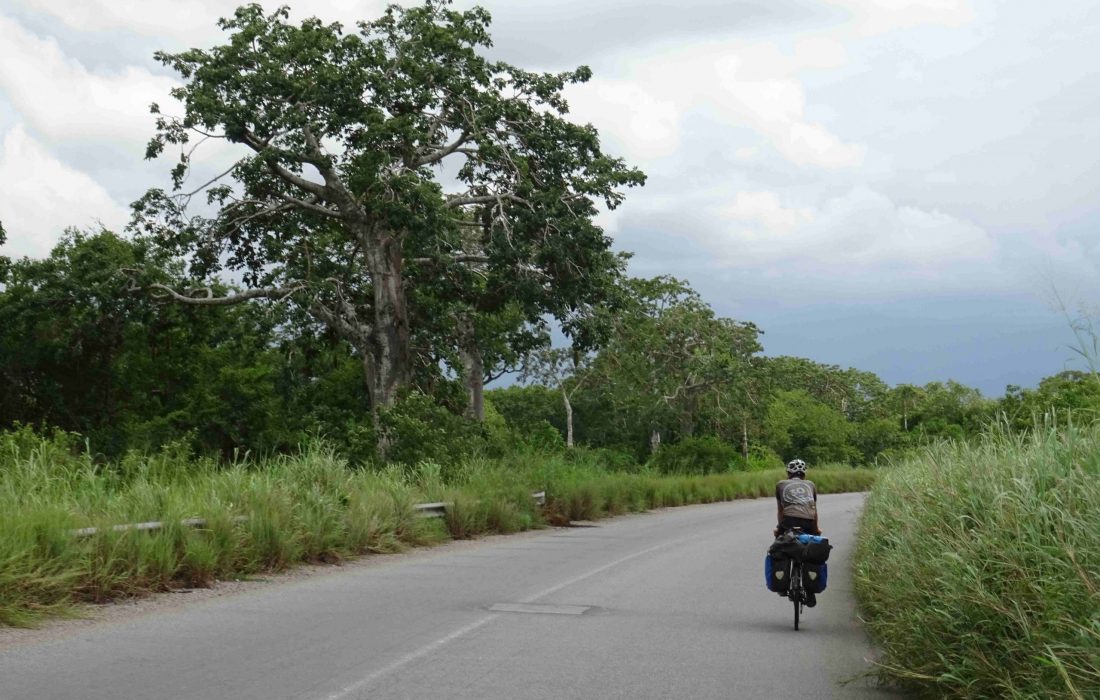 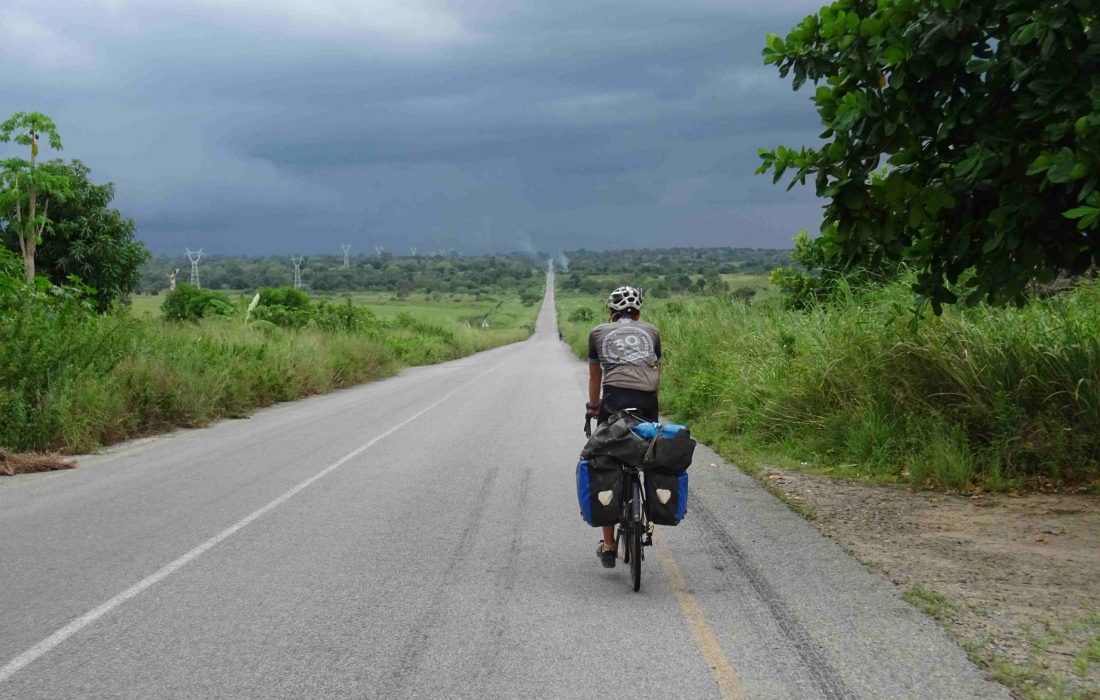 Since we reached the coast, the air got more humid, there were more trees again and the landscape was even less populated than before. It was very difficult to find something to eat and the drinking water was only from streams or rain water. This is not a problem for us, since we were used to this kind of water.

The landscape was clearly dominated by the mighty baobabs. Quickly, we got used to the hilly and almost ten meter wide main road in the direction of the capital. After the challenging roads in the Congo the paved roads were more than welcome. 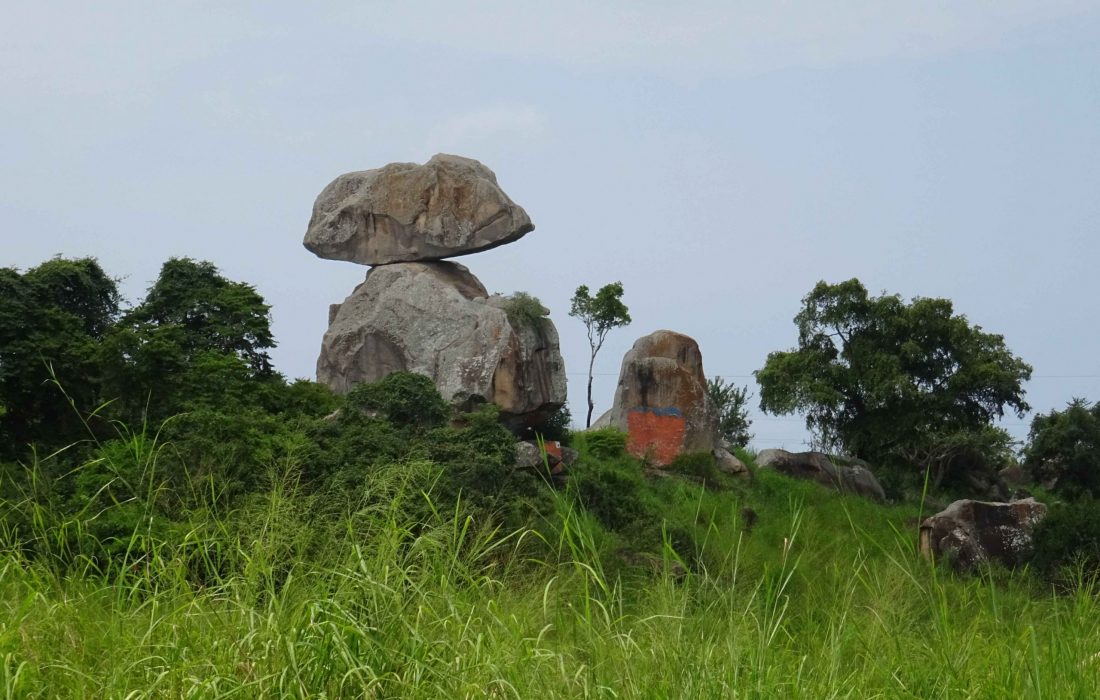 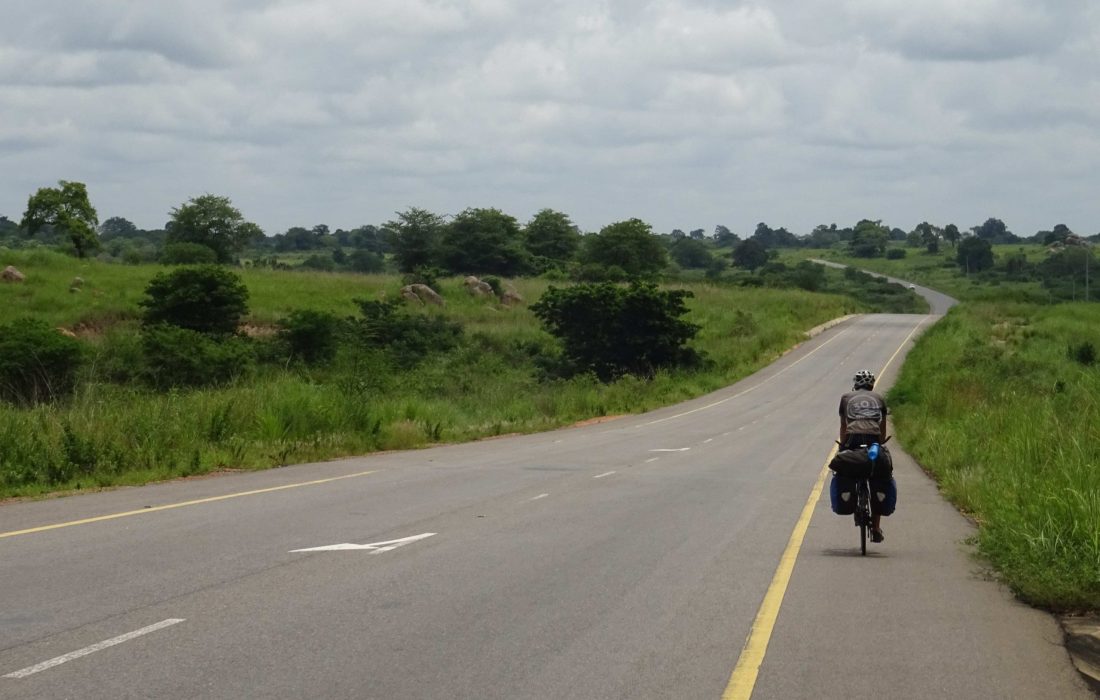 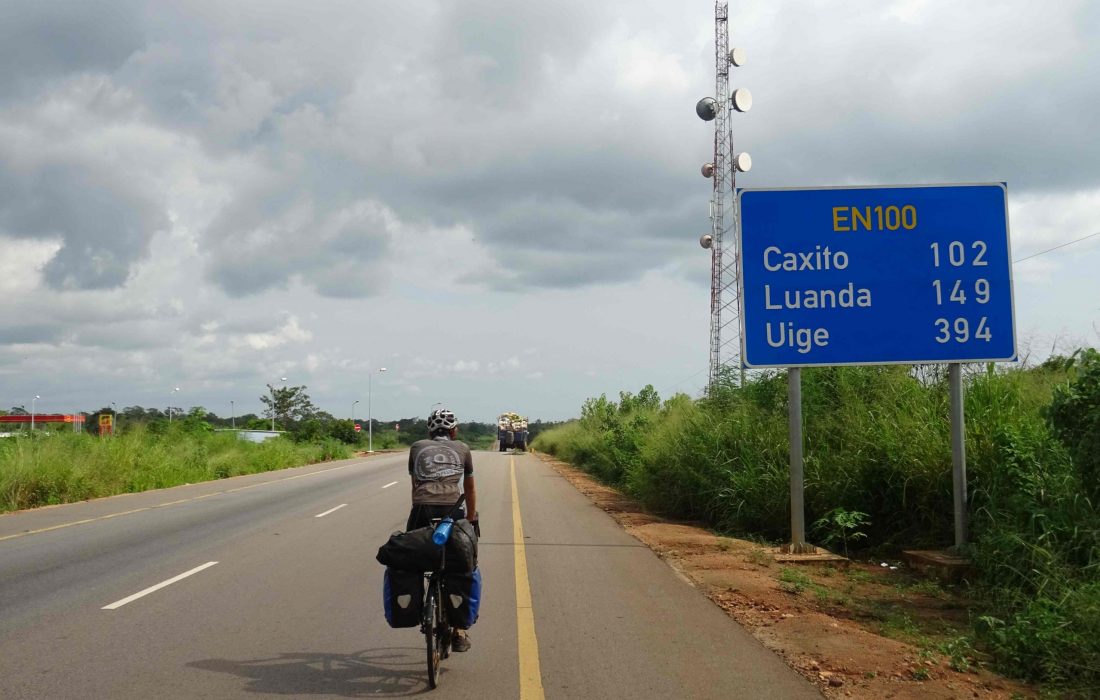 After a restless night thanks to thousands of mosquitoes in and around our tent, we ate four huge papayas and we started our day on the empty road. Shortly after, we were attacked by dozens of horseflies, which sat on our bags profiting from the slipstream and from there tried to sting us into the back or the bottoms. The person in front was lucky, since he could profit from the warning from behind if one of the insects would sit down somewhere.

Unfortunately, we spent all our local money the day before, since we underestimated the prices and we searched vehemently for a money exchanger. Sadly, nobody wanted to exchange money for a decent black market rate and we had to cycle around 90km with only a low calorie breakfast in our bellies.

In the stinky and dusty city traffic, we fought ourselves on the wide main road through the slums of the suburbs and waved at the numerous women and children on the side of the road. Those people live in minimalistic constructions out of rubbish and have to get water with canisters from far away.

Shortly after, we saw the immense skyline of the large city. Due to the oil wealth in Angola, there are many skyscrapers and investments going on. The money flows, but as usual in resource rich countries, the income gap could not be bigger. On the beautiful esplanade, we cycled to the sailing club “Club Naval”, where travelers can stay for free and use the showers. Shortly after we pitched the tent on the parking lot, a fierce storm approached and the sky was suddenly black. When Adrian took a shower, a gust of wind caught the tent and broke our tent pole at two different positions. The rain started and Fabian could only hold the soaking tent with all his force until Adrian was back, to carry all the equipment under a protected area. Luckily, the owner offered us a room for the night, so we did not have to sleep in the wet tent and were not exposed to the strong rain. On the parking lot, we met a Dutch and an English couple travelling the continent with their cars and exchanged our experiences in Africa. 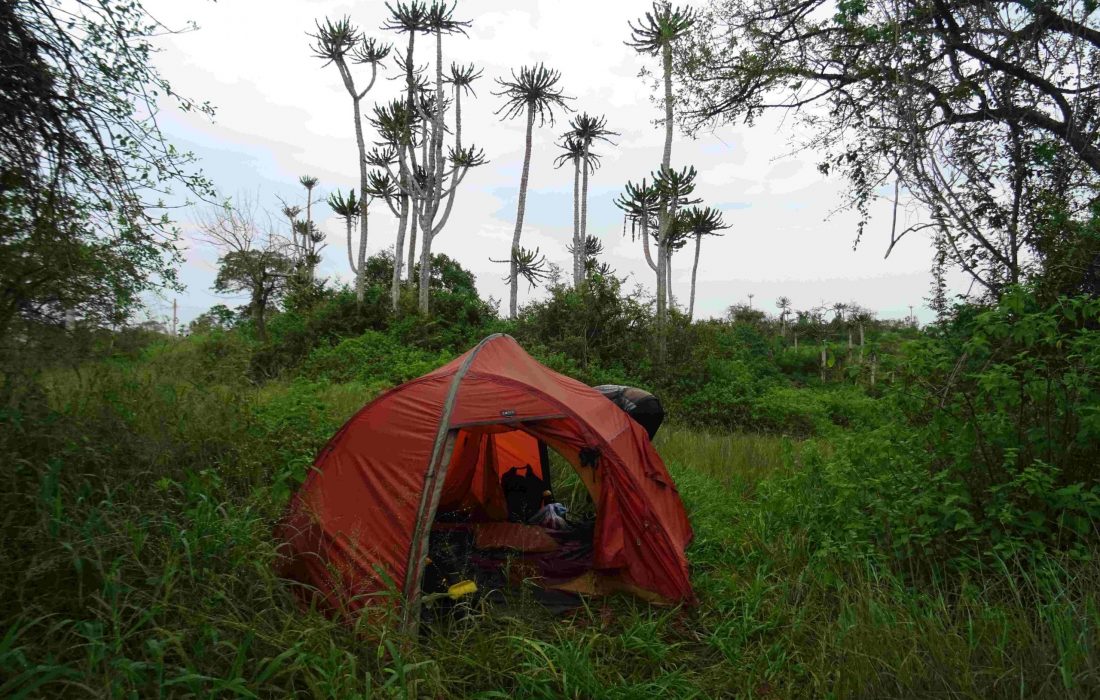 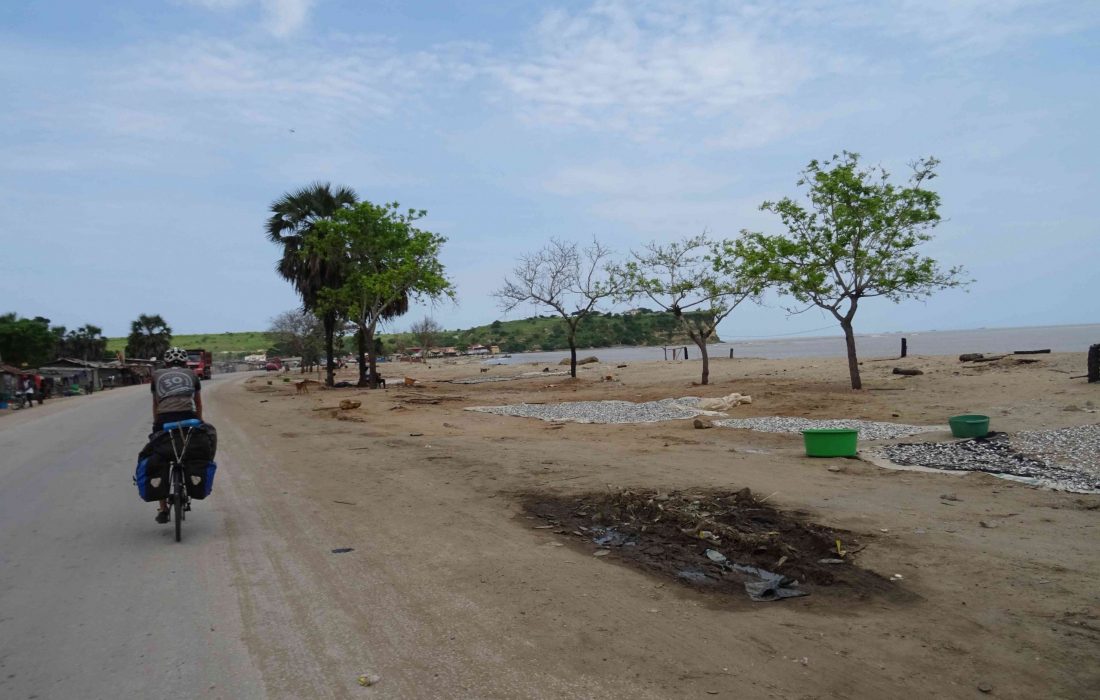 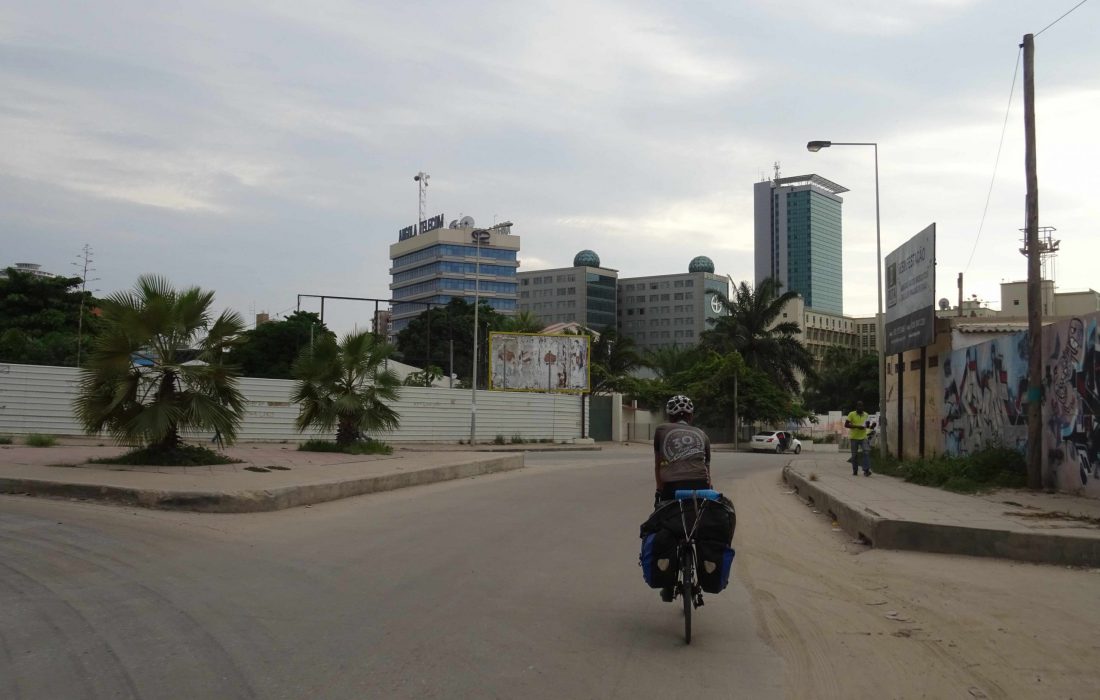 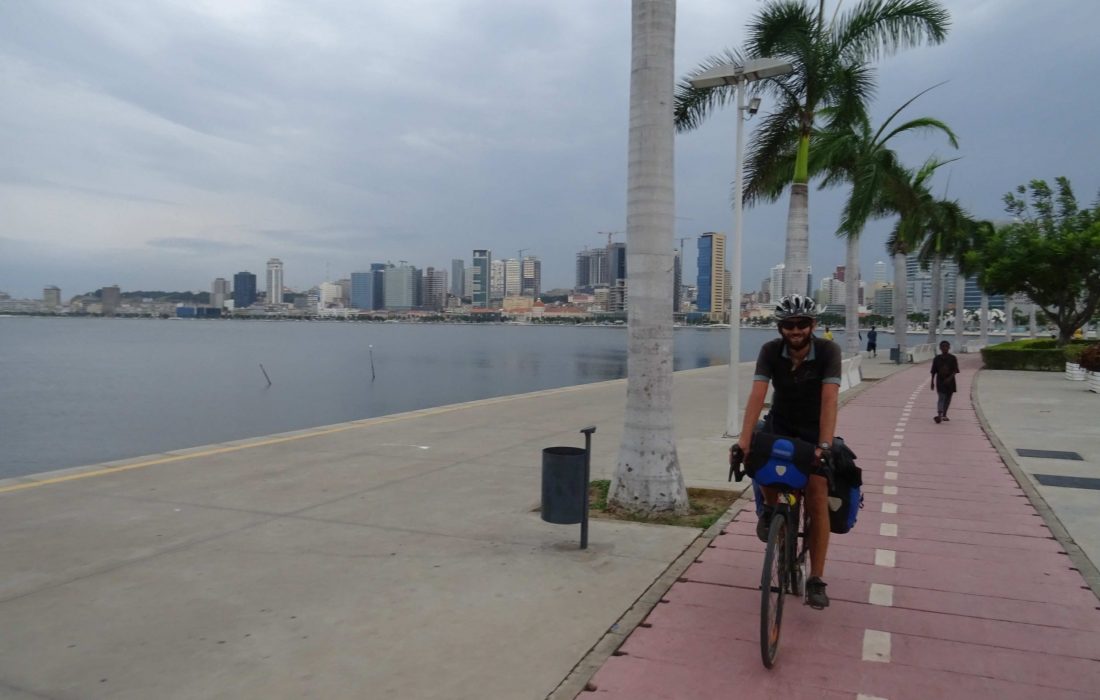 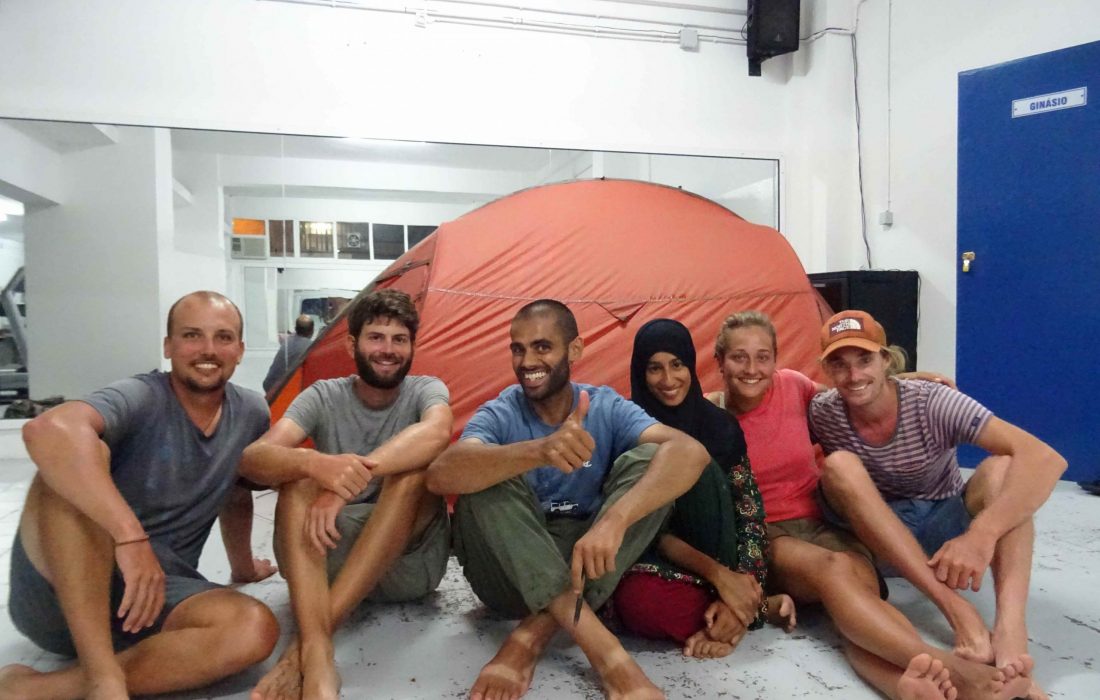 We said goodbye to the two couples and cycled along the promenade to the first cycle store. Gicate is a state-of-the-art bicycle shop with sports clothes, luxury bicycles for several thousands of Euros and a perfectly equipped workshop. The sympathetic owner named Nuno looked at our bicycles and explained his best mechanic our problems. The professional former cyclist saw immediately what was wrong with our rides, took them apart step by step, cleaned certain parts and replaced a ball bearing at the front hub and the free hub, which kept us busy in the last two weeks. We were in contact since a few days with Nuno and his mechanic was looking for the small part that was difficult to find and truly found one.

This took almost the whole day and the friendly, calm mechanic worked without any breaks on our bicycles until most problems were solved. Nuno charged us only a minimal price, which was more like a tip and wished us a good journey. Shortly before leaving the shop, a helpful customer exchanged us some Dollars into the local currency (Kwanza) for a great rate.

Around fifteen kilometers further south, we visited a second bike shop called Link Connection and were received enthusiastically. Immediately, they started taking pictures with us and we were celebrated as if we already reached Cape Town. The excited cyclists gave us each a jersey and a pair of socks with the label of the shop.

Some minutes later, we reached the residence of the teacher’s couple Mags and David, who we contacted via Warmshowers. The attentive globetrotters cooked a delicious non-African dish for us and we enjoyed a pleasant evening together. 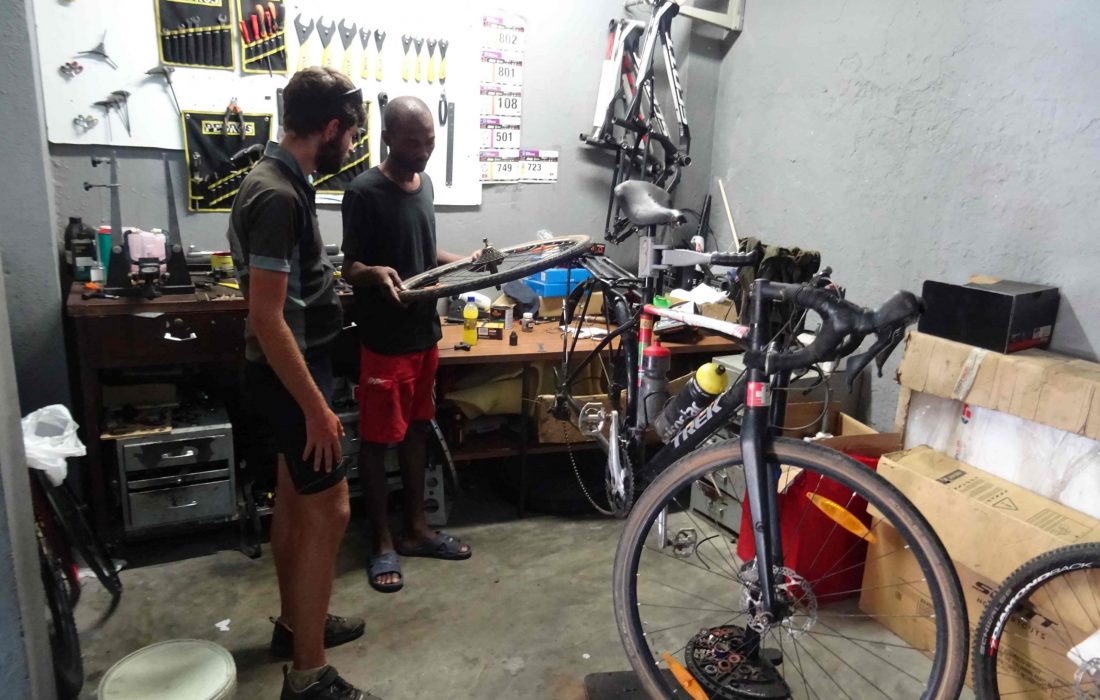 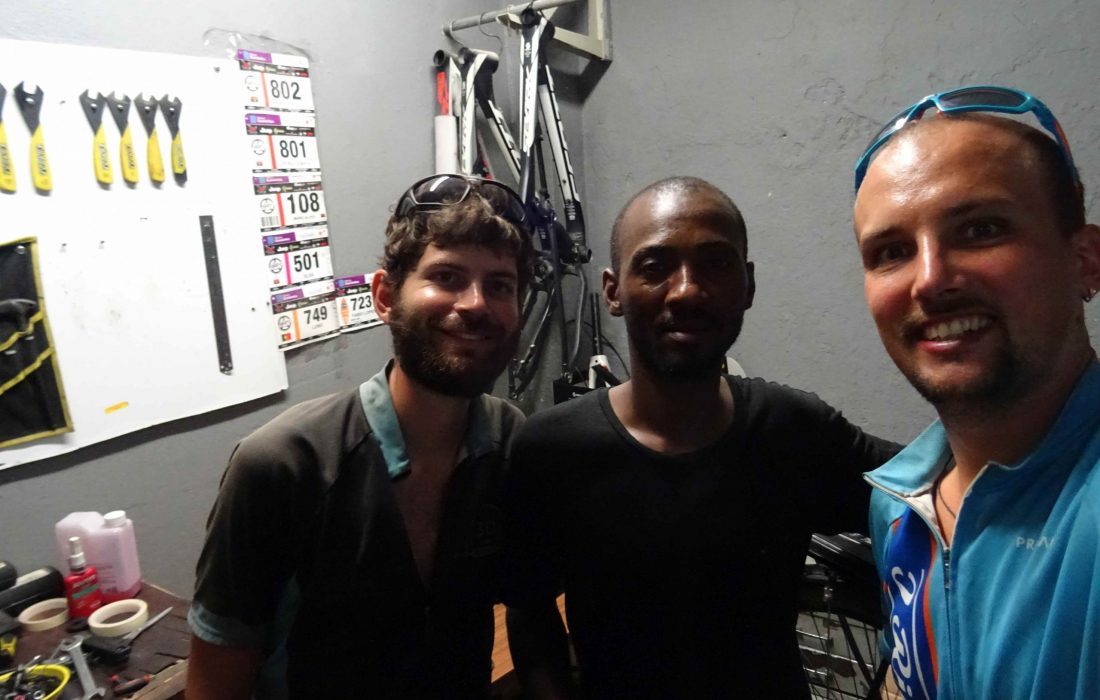 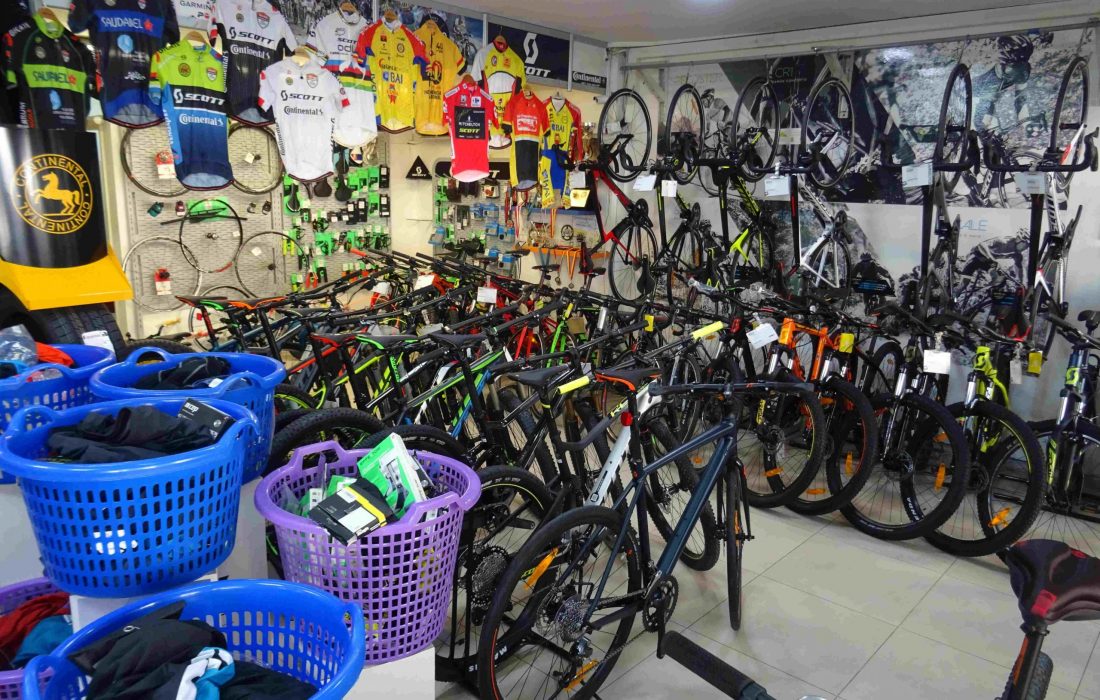 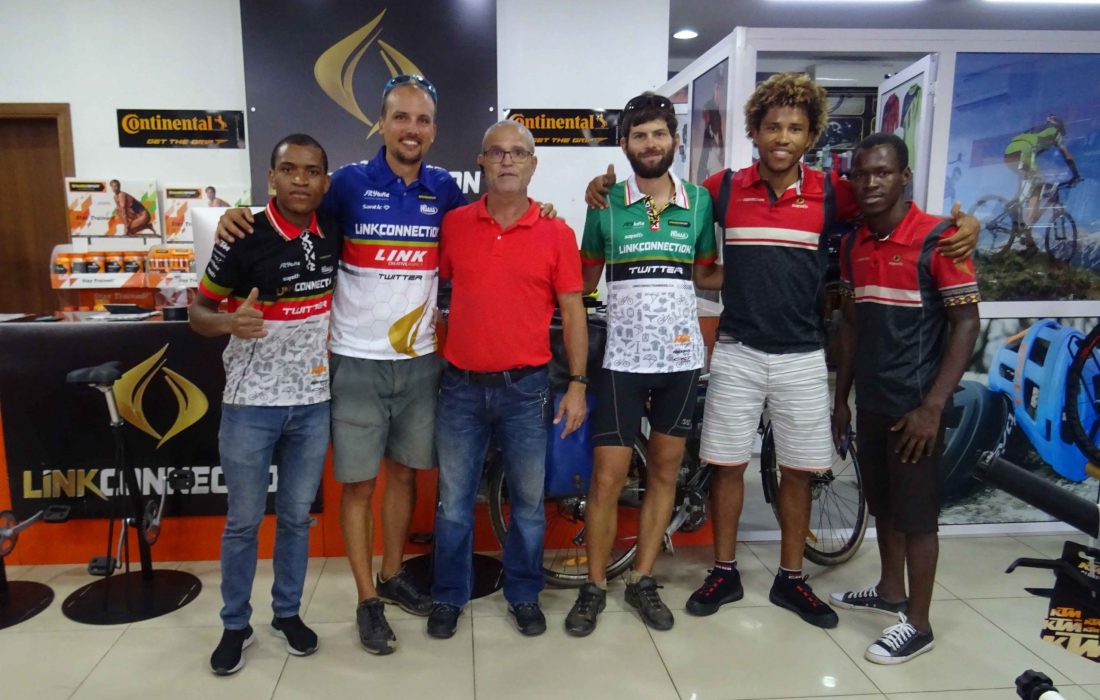 Once more we enjoyed the luxury of air conditioning, a sofa and a shower and had interesting conversations with the well-travelled couple. Both of them already worked in a few international schools in Asia and are already eight years in Angola. Soon, the bicycle enthusiasts take a yearlong sabbatical to discover South America by bicycle.

During one evening, we discovered a hip, local restaurant with a teacher friend called Bruce and another night; we watched a movie together in the comfortable apartment. The school campus offers a pool, a tennis court and a large library.

Already a few days before we arrived in the capital, a new solar panel including a battery arrived per post in Angola, generously sponsored by Tinu (Solarmaa), since the old panel died back in Guinea. 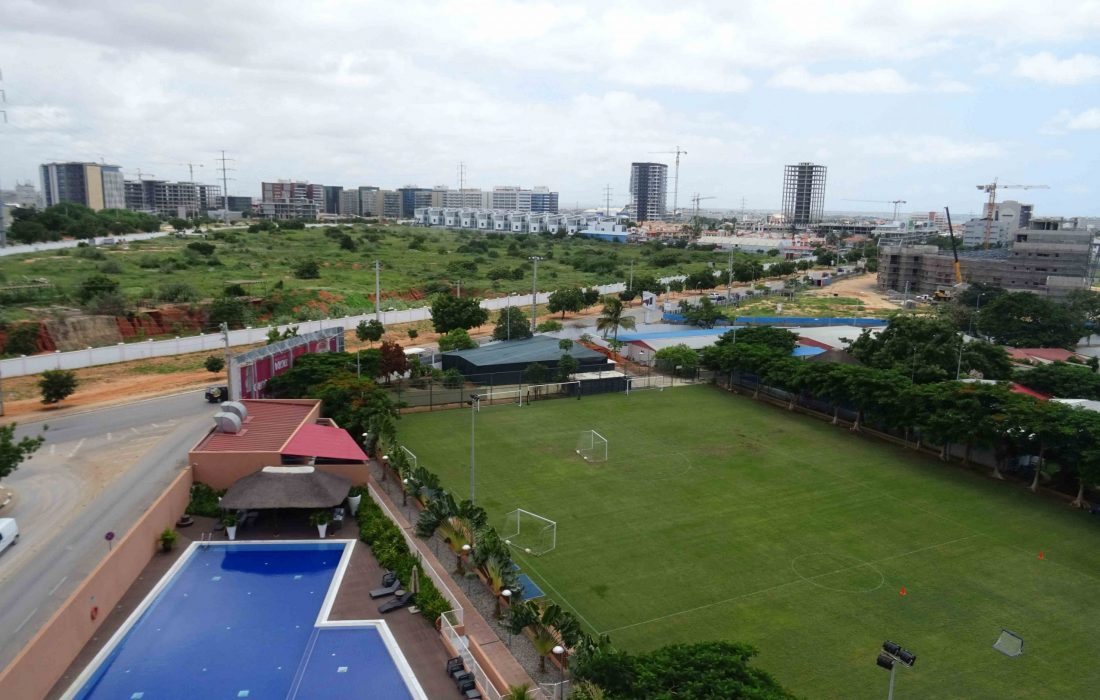 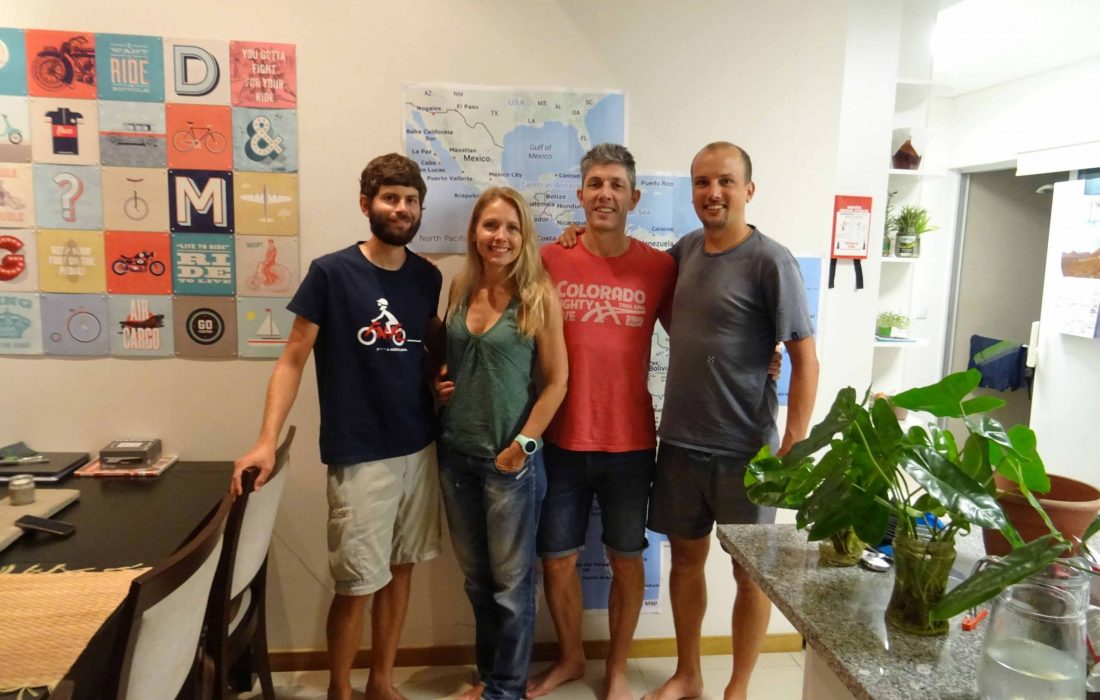 Despite proper food and clean drinking water, Adrian suddenly had strong stomachache and had no appetite. Normally, those complaints vanished after a few days without any treatment, so we awaited the outcome.

In the state-of-the-art computer lab if Sintese, we could read out our memory from the broken laptop. Fernanda, the friendly head of the department did not charge us anything and was happy to help us out of this uncomfortable situation. 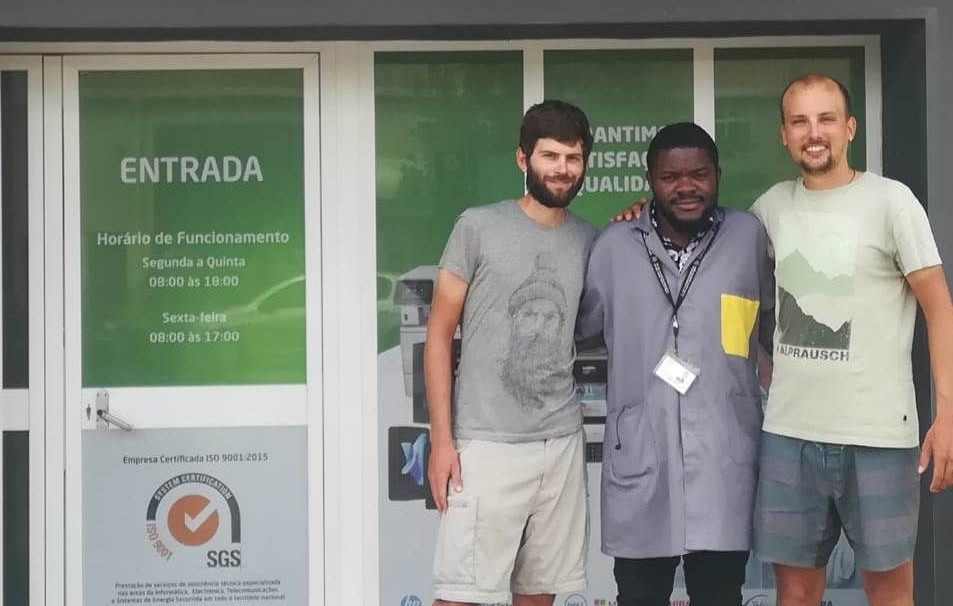