After another visit at the dentist, the pain was more or less gone. He polished the inserted filling, so that the teeth match each other more precisely when closing the mouth.

Afterwards, we started cycling towards the mountains, since an altitude gain of 1800m expected us during the next 350km. The last days, we cycled directly southwards, but now the road led us inland and away from the coast (Cycled Route). In the beginning, the landscape was desertlike and extremely dry. Soon, spiky bushes decorated the scenery and the wind got stronger. After a long downhill, we could finally profit from the wind and made great progress.

Rocky mountains surrounded us and the region got greener and therefore more and more trees were visible left and right from the road. Many herds of cattle and goats walked next to the road, driven by children-shepherds. At many places, milk with added sugar was sold in large plastic bottles.

A woman, who owned a small shop, understood that we wanted to fill our pot with a warmed up dish and gave us a tasty meal. After we did not follow a bypass, because we were too lazy, we had to carry our bicycles across a collapsed bridge. 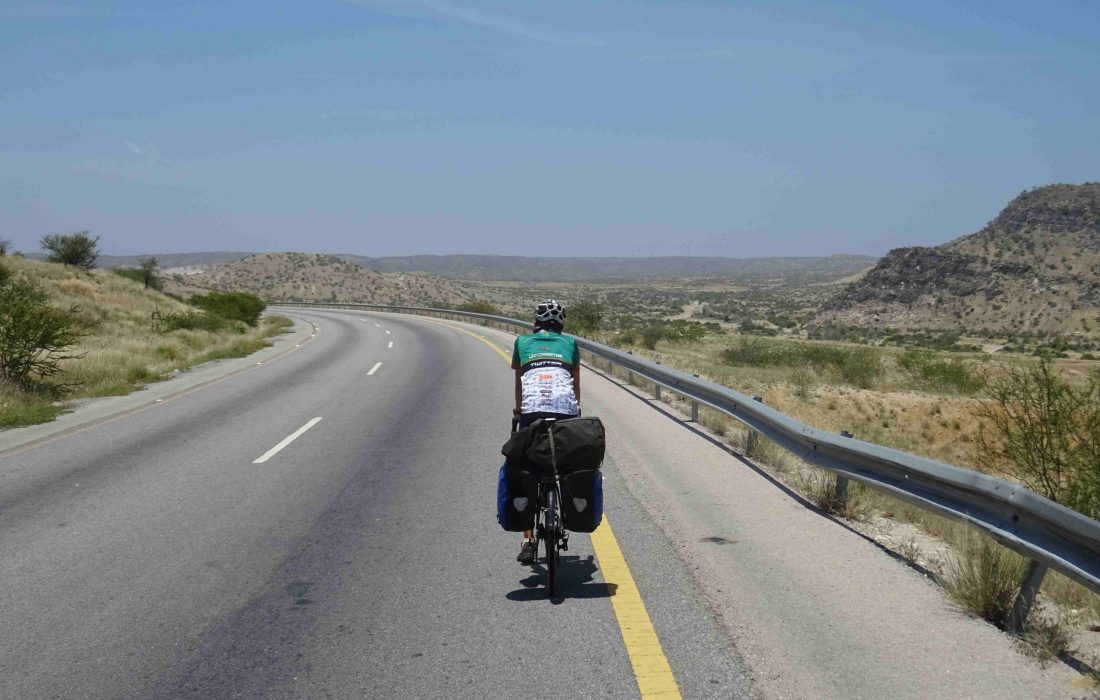 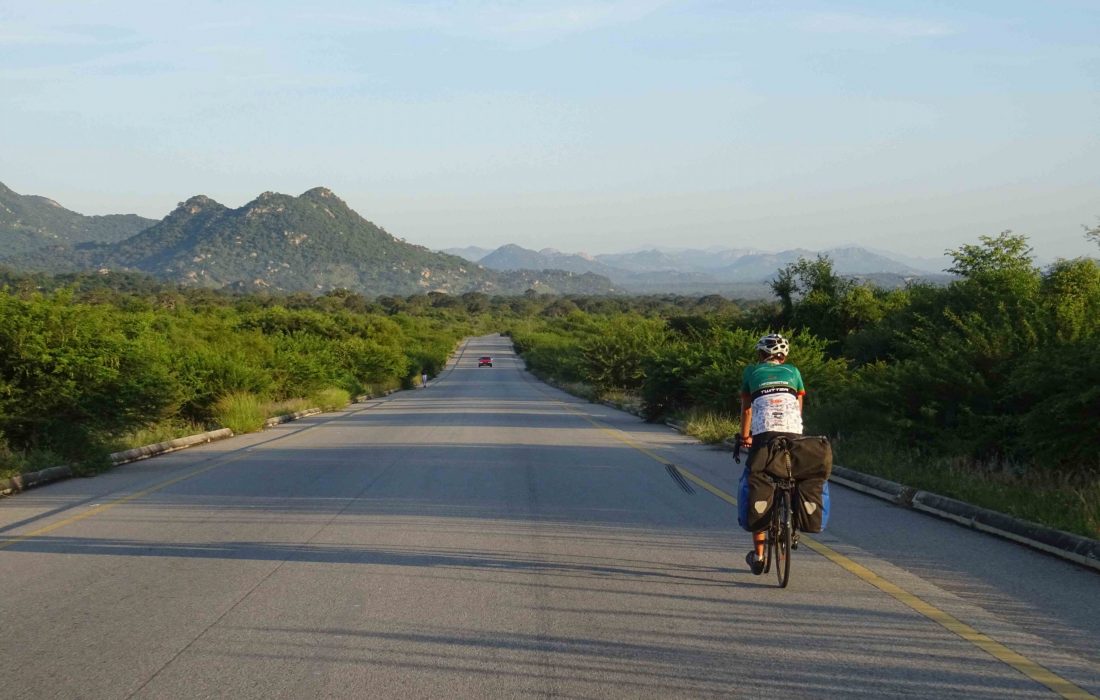 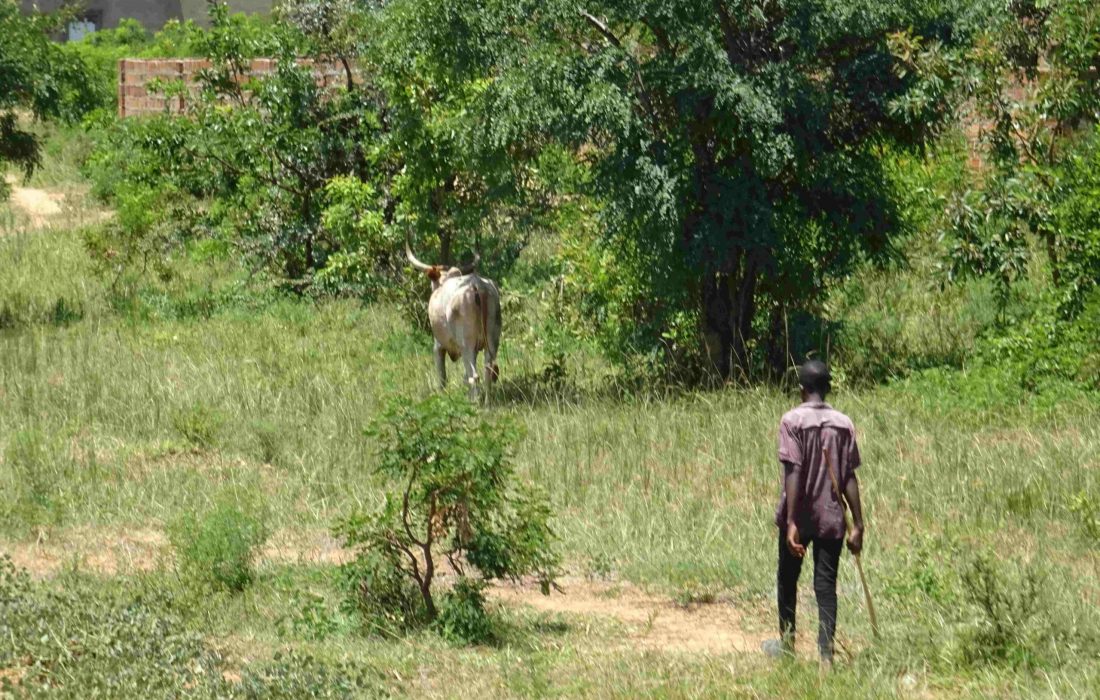 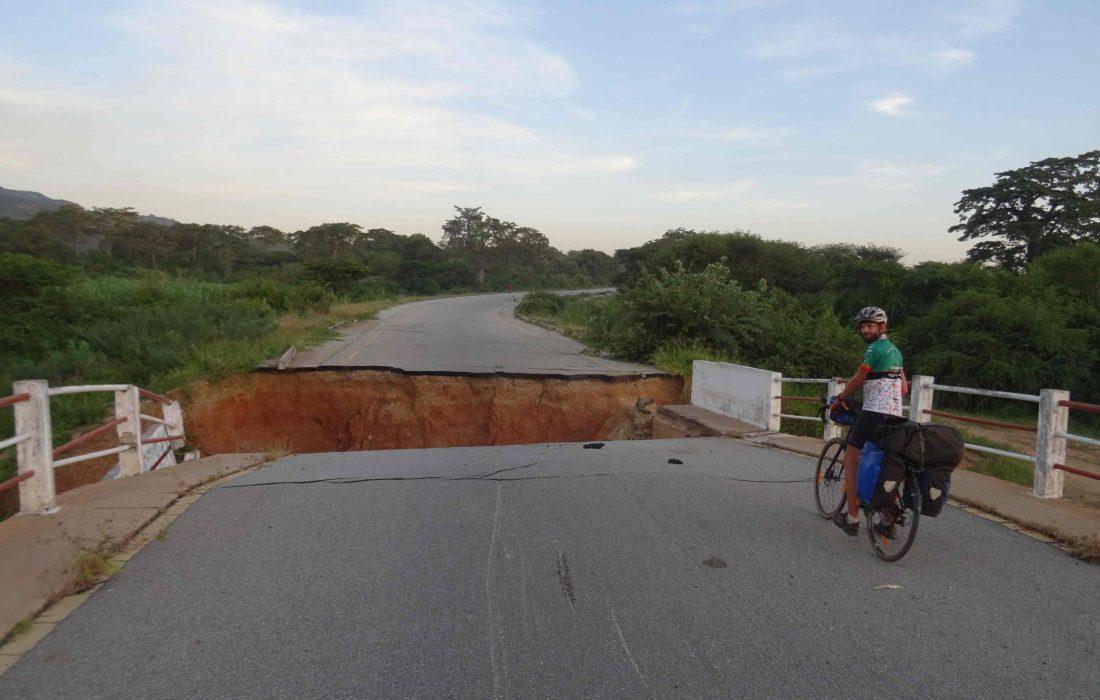 The distances between cities in Angola are mostly around 60km or more. Therefore, we had to plan well, how much we wanted to eat or how many snacks we should bring for the road. Next to the road, women sold milk, bags of coal or huge pieces of meat.

Although Angola has the third largest economy after South Africa and Nigeria in Sub-Saharan Africa, a large part of the population lives in poverty. Especially in the villages, people life simply and build their huts from natural materials. 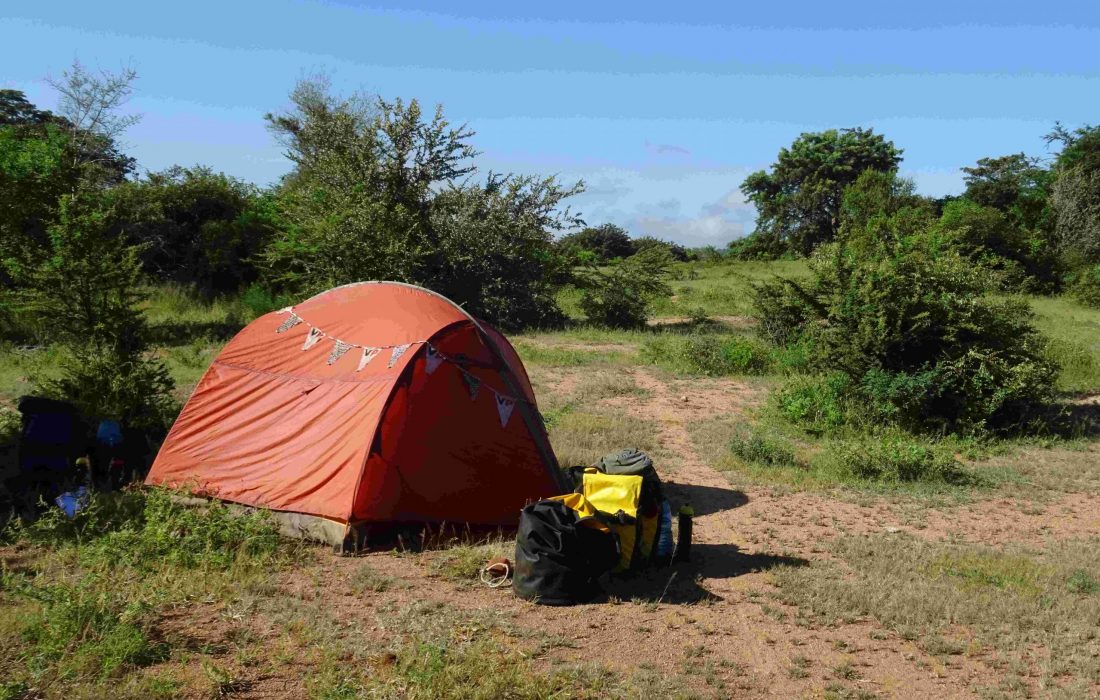 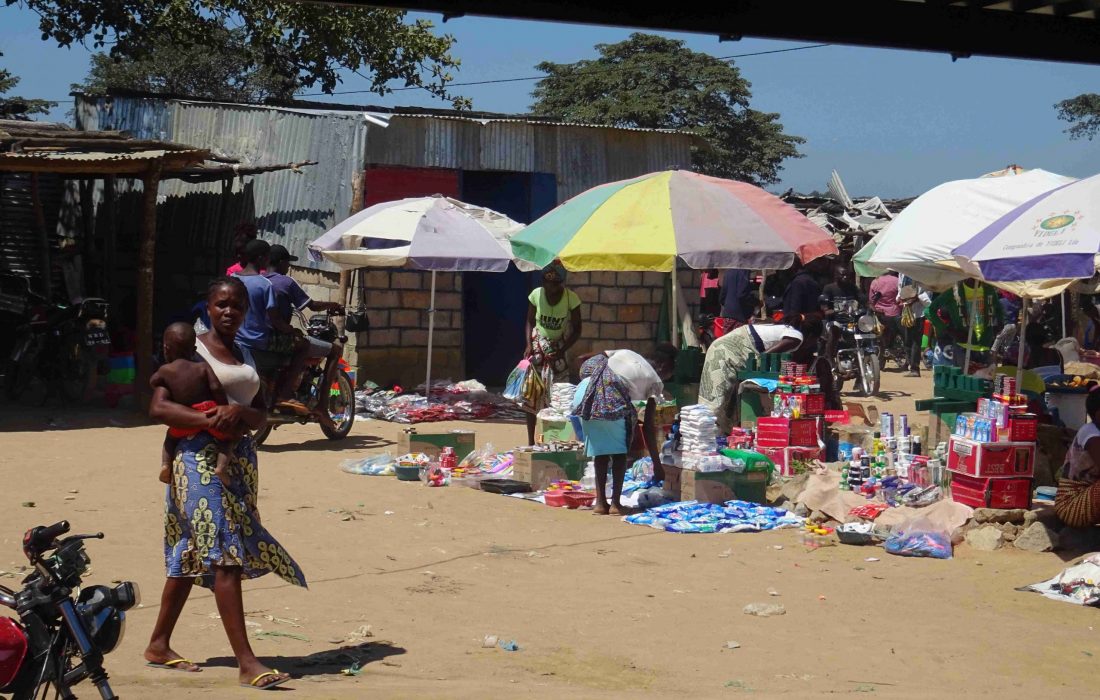 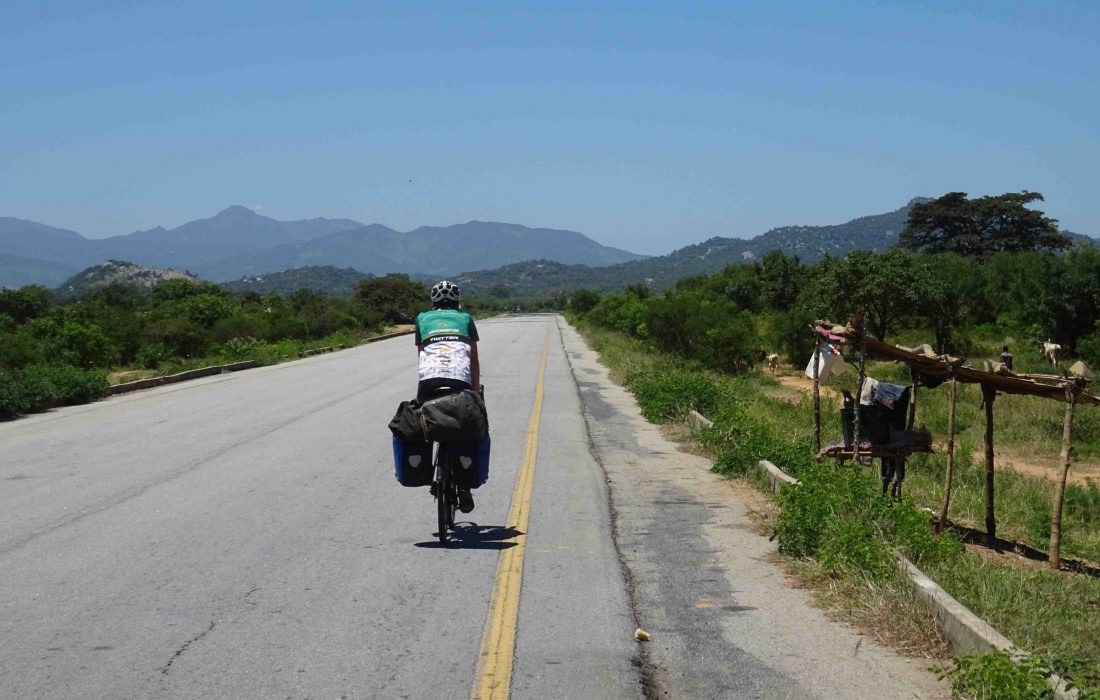 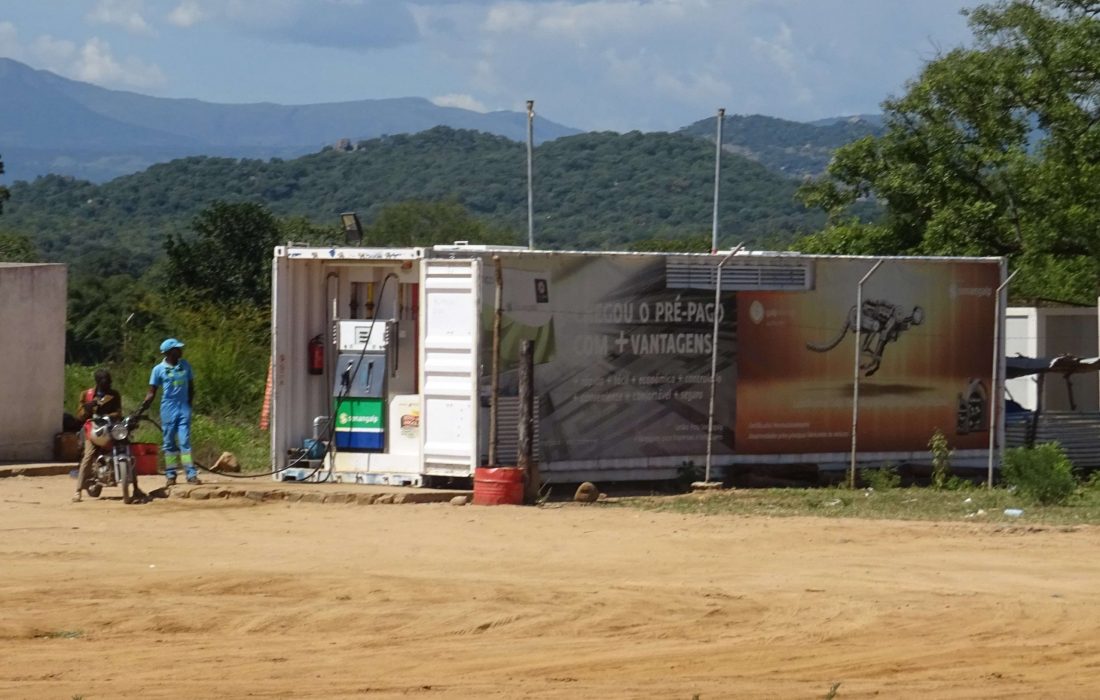 After a calm night, we attacked the steep hills again and soon, we overtook Henk. Impressive, how he cycled the same distances thinking about his age. After all, we completed 120km in the last two days while gaining many meters of altitude!

After we reached an altitude of 1500m, the terrain got more flat and large corn fields replaced the scattered sugar cane plantations. Suddenly, a Jeep honked several times and two men waved at us with a big smile. The two Romanians left their home in February and want to reach Cape Town after a total of 45 days. After a short conversation, we even got some delicious sausages from Romania as a present. 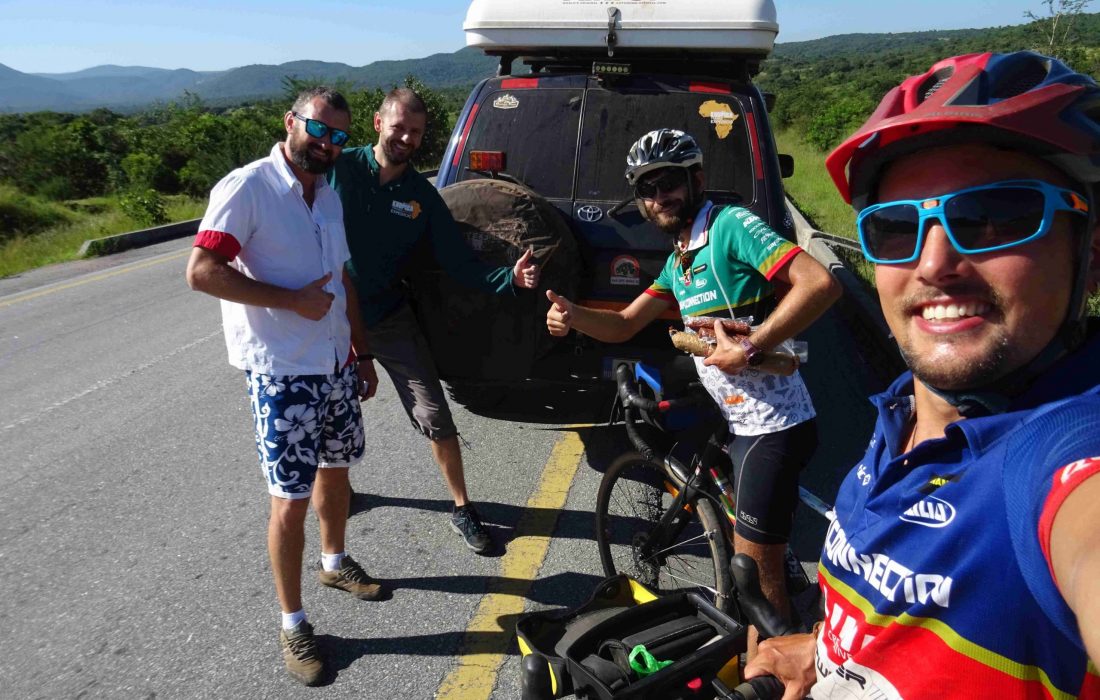 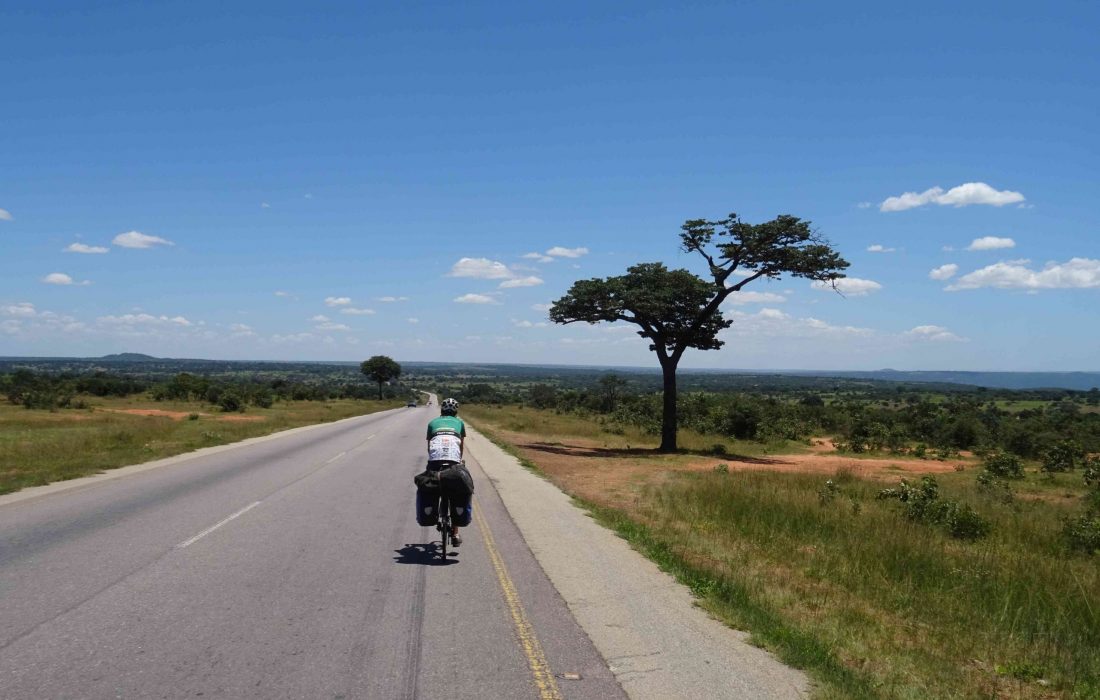 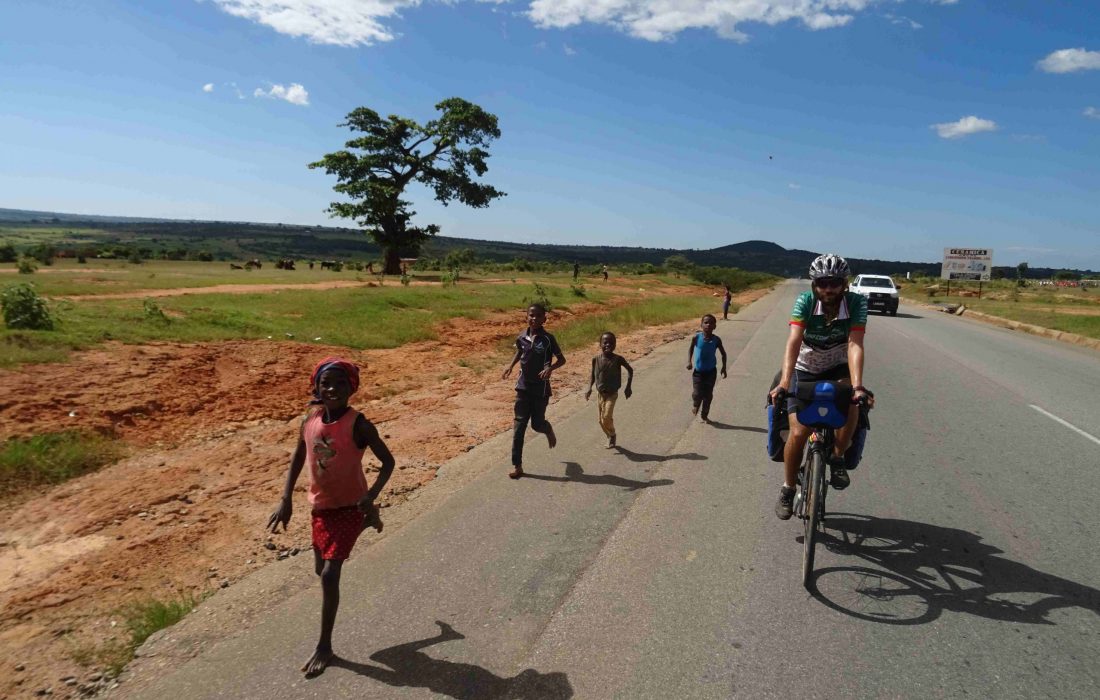 During the last nights, we needed our sleeping bags for the first time in a while. The air was still cool in the mornings and in general much drier than in the weeks before. Quickly, we reached Lubango and therefore the last large city before the Namibian border.

At first, we had an Angolan Couchsurfing member, who wanted to host us, but then he cancelled due to the Corona Virus. He did not want to take a risk of a potential infection. Mario recommended us to pass by the English school, to ask there if somebody maybe could host us for a few nights. Indeed, we met Paul, the son of the founder of the school and he said that we can stay with his mother. A bit outside of town, we were warmly welcomed by Janet and even got our own room with a bed. 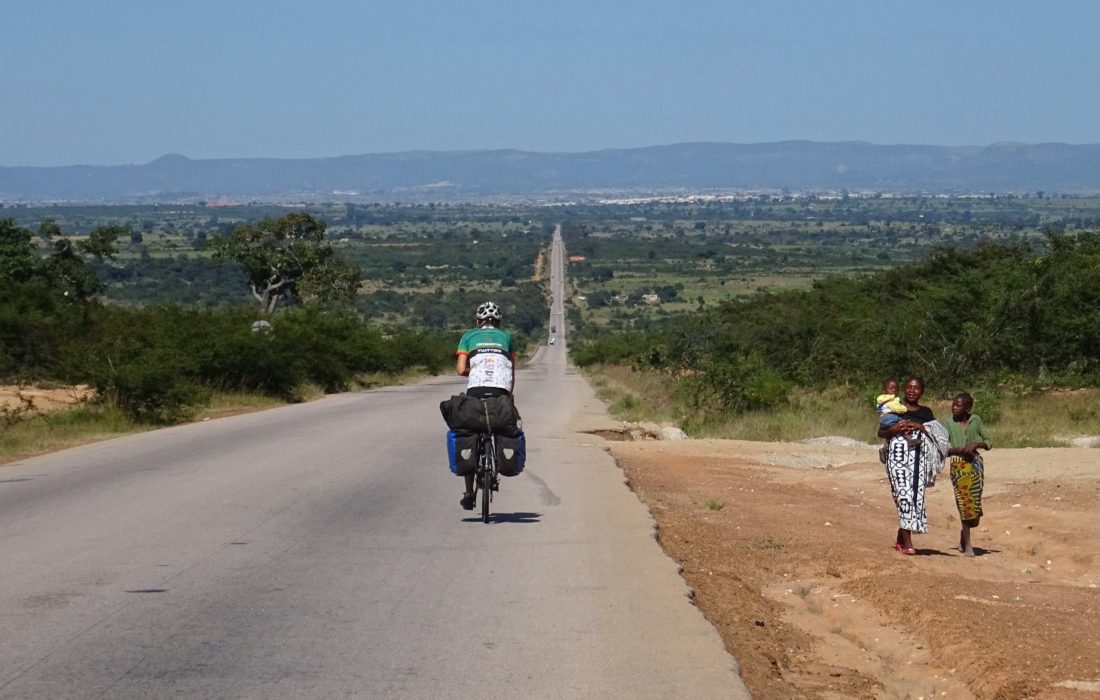 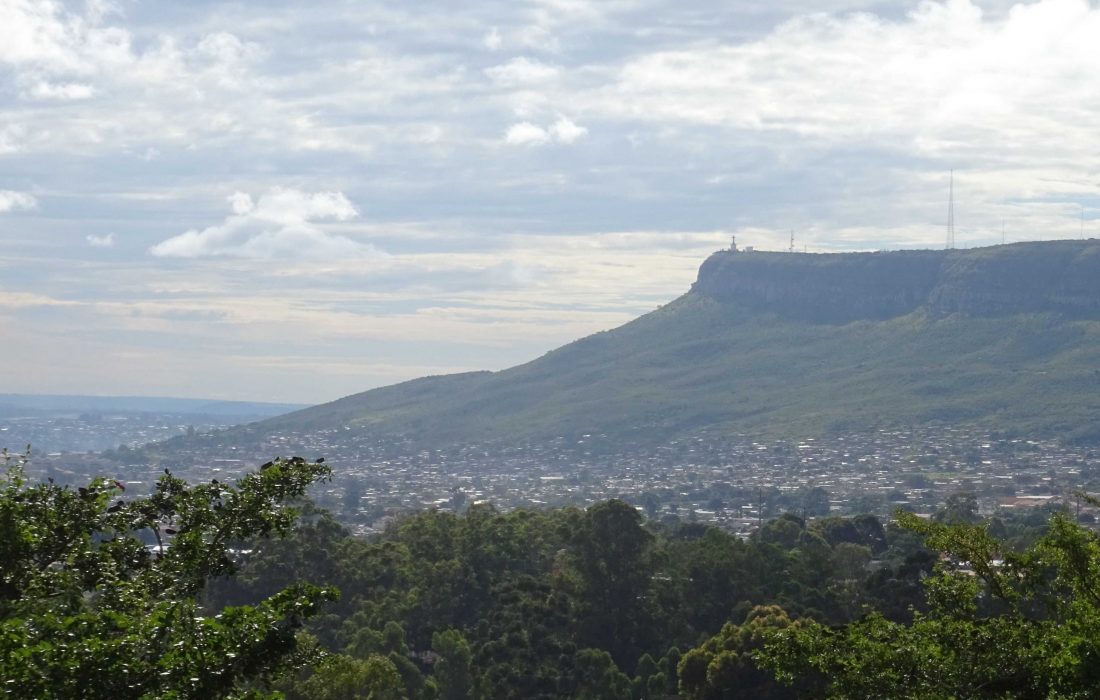 A highlight in Angola is the Leba Pass, which drops more than 1000 m outside of town. The road contains several hairpin turns and reminded us of a Swiss mountain pass. The view and the imposing cliffs impressed us immediately. On the way there, a friend of Janet showed us a modern hospital, which is supported by the Catholic Church. It was no problem at all to hitchhike to the pass and get back to town. 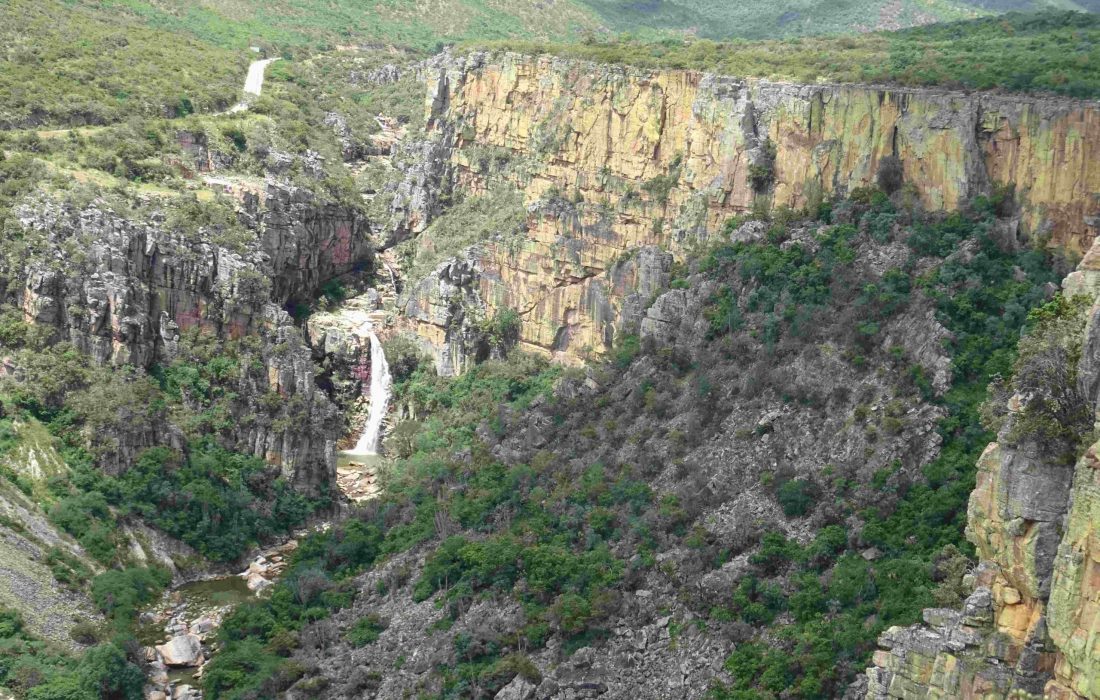 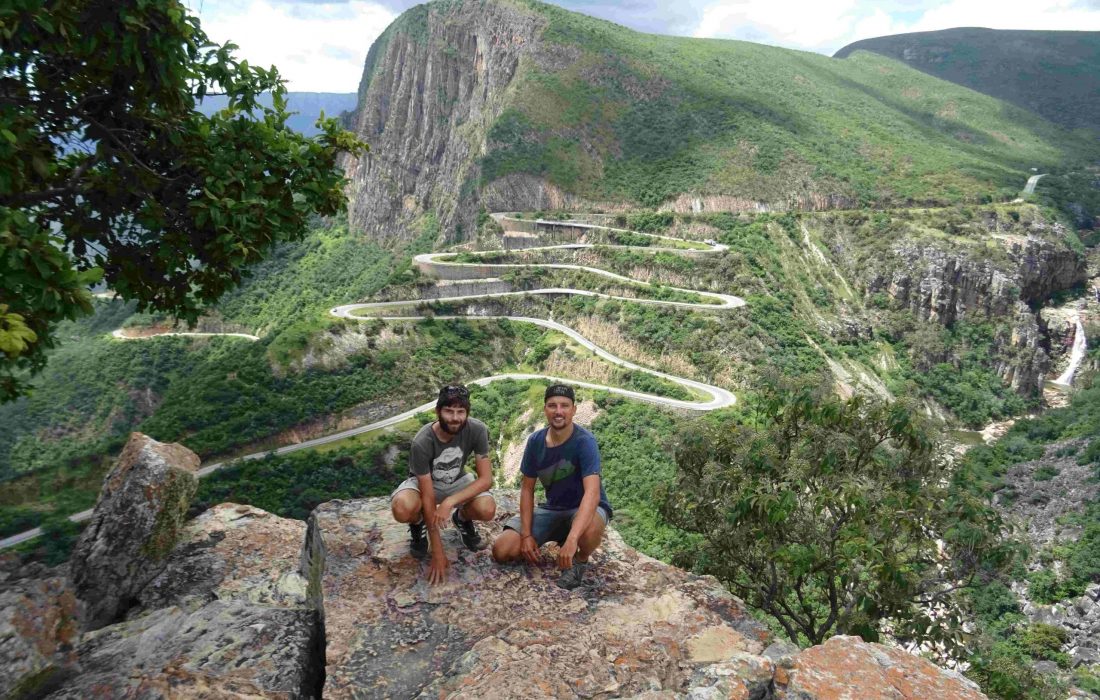 In the evening, we were invited to a social evening by the missionaries, who mostly work at the hospital. We were in the focus of attention, since nobody knew us and the guests were interested in our journey.

The 82 years old Uncle Steve promised us to show us the view point called Tundavala. The energetic and still active eye surgeon picked us up with his frail Jeep and drove us to the impressive escarpment. In addition, Gordon, a Canadian dentist was with us as well. The precipitous cliffs and the panoramic view were definitely a highlight of our journey. On the way back, we visited a waterfall and a Swiss cheese factory. Gordon, who cycled through Europe a while back, bought us some cheese and a sausage. 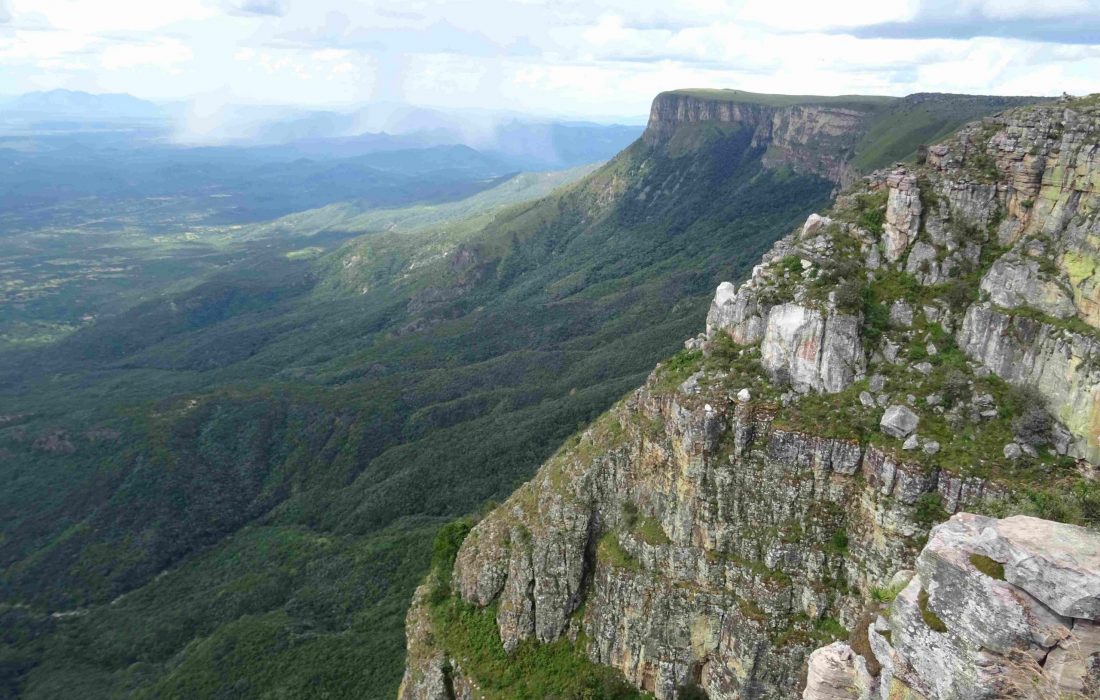 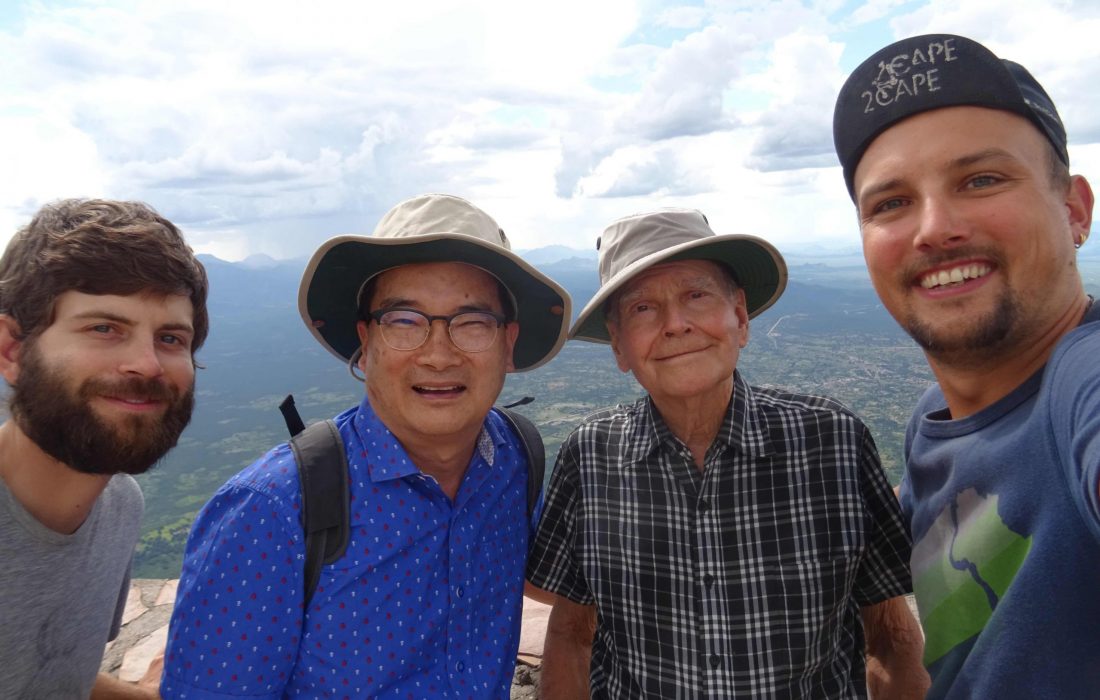 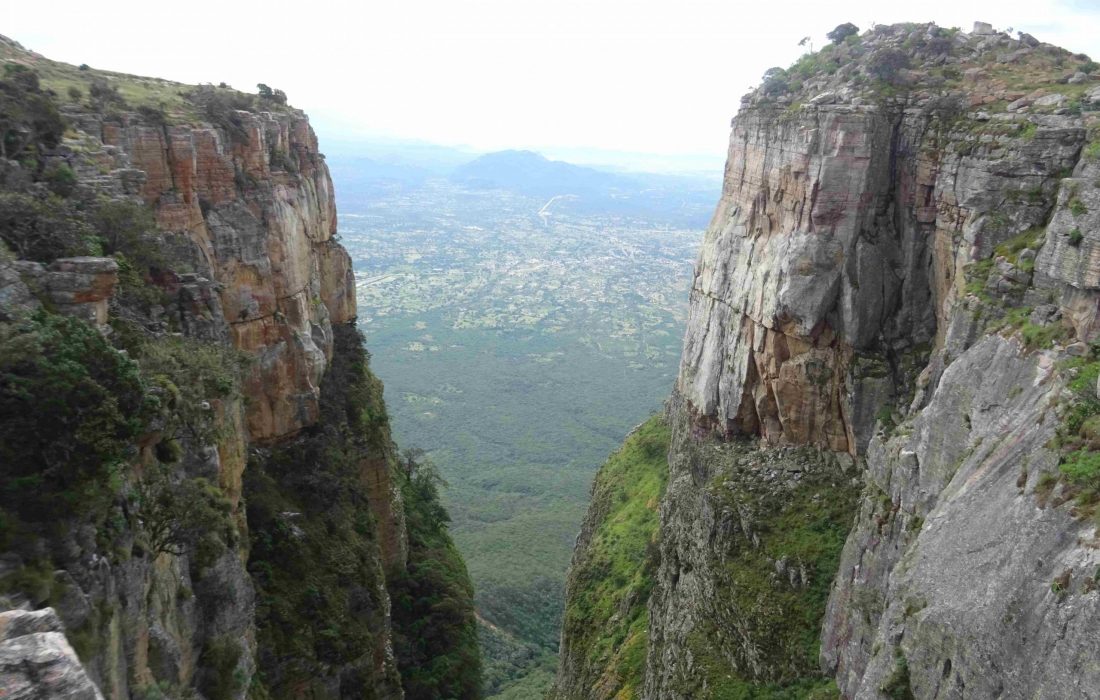 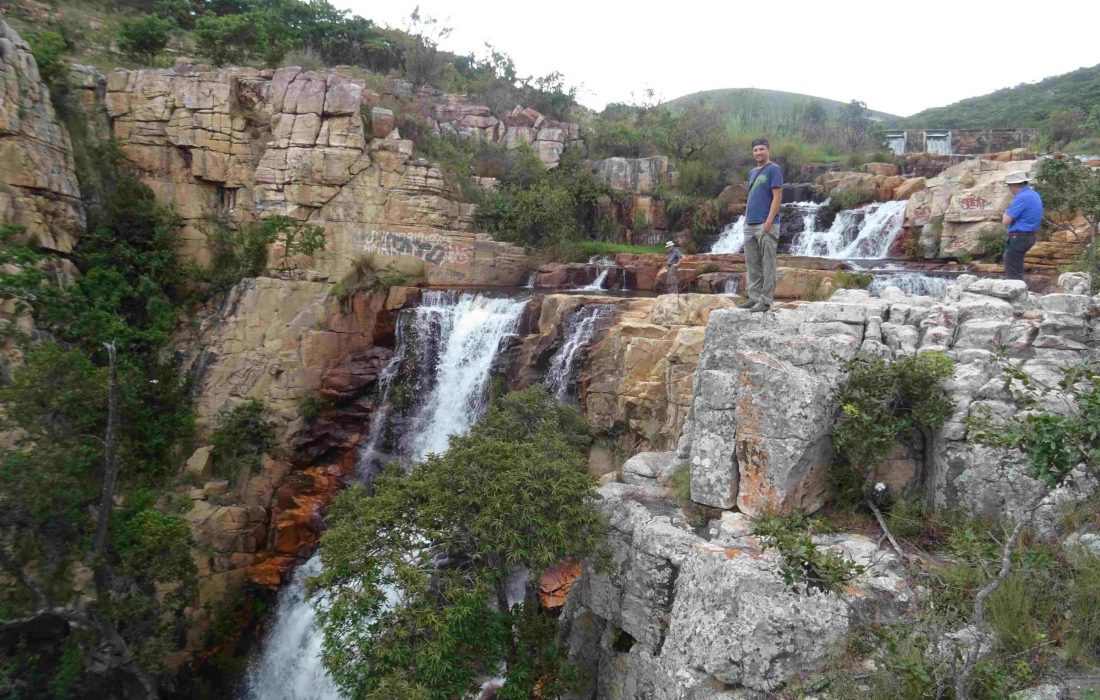 The immense house of Janet, which she invested countless hours, is not finished yet, but the view is unique. With lots of love for the details, Janet decorated the floor for example. 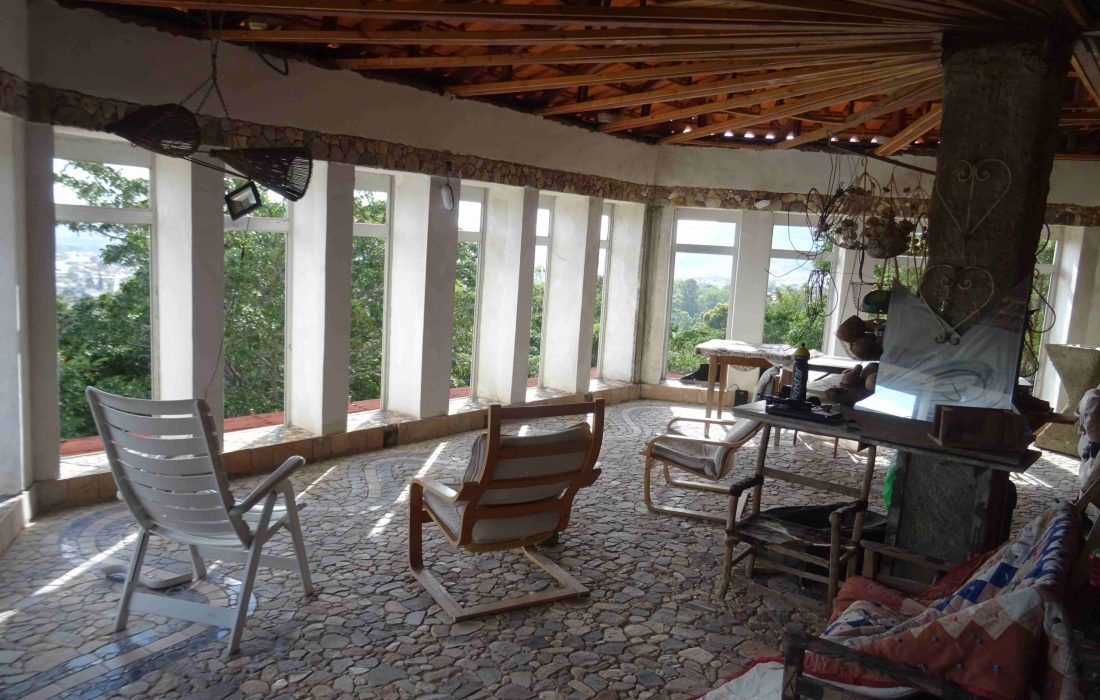 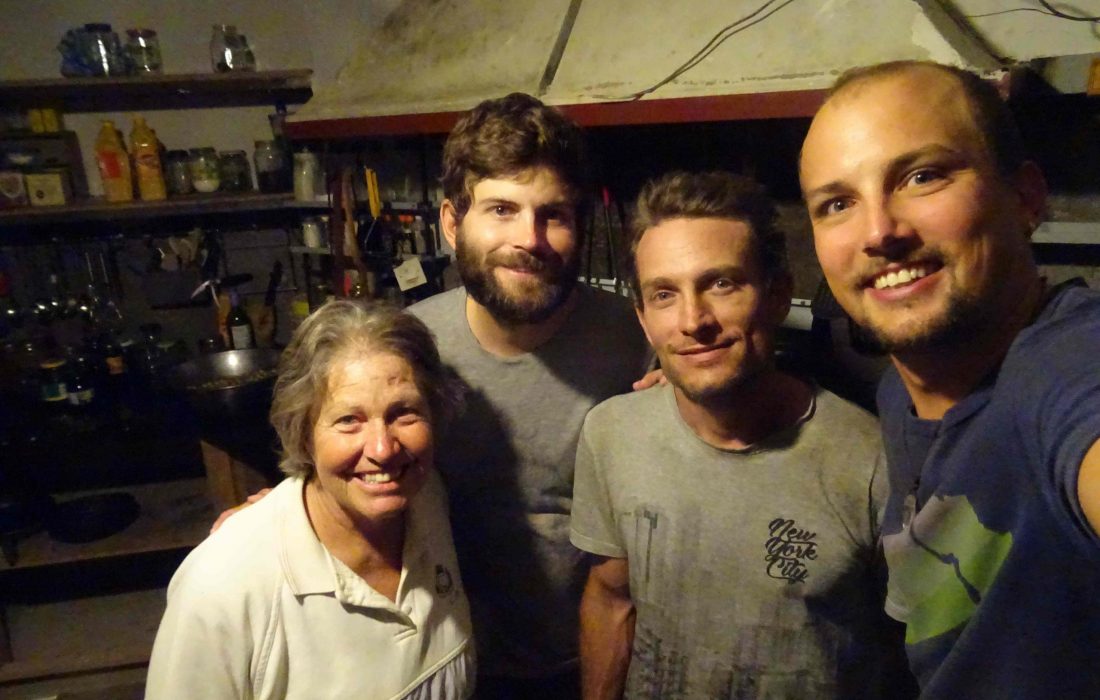 After an extensive breakfast including Tilsiter cheese, we left the city and approached the border to Namibia. By tendency, we lost lots of altitude and made good progress, despite strong wind.

Slowly, the mountains disappeared and only from time to time, we saw rock formations. In a bar, we were allowed to cook our Spaghetti and a tipsy employee helped us. The cheerful women and men were happy to see us, but unfortunately it was very difficult to communicate, since we still could not speak many words in Portuguese after a month.

To our surprise, we cycled passed many granite quarrying locations. The hills disappeared and we saw more and more shepherds who observed their animals. Mostly they were kids with shredded clothes and dirty faces.

Suddenly, we saw a cyclist approaching us. We already knew that is was Francis from Belgium, since we were already in contact with him since a while. The sympathetic and language affine adventurer started more than 2.5 years ago and travelled already across Asia, Australia and Eastern Africa by bicycle. 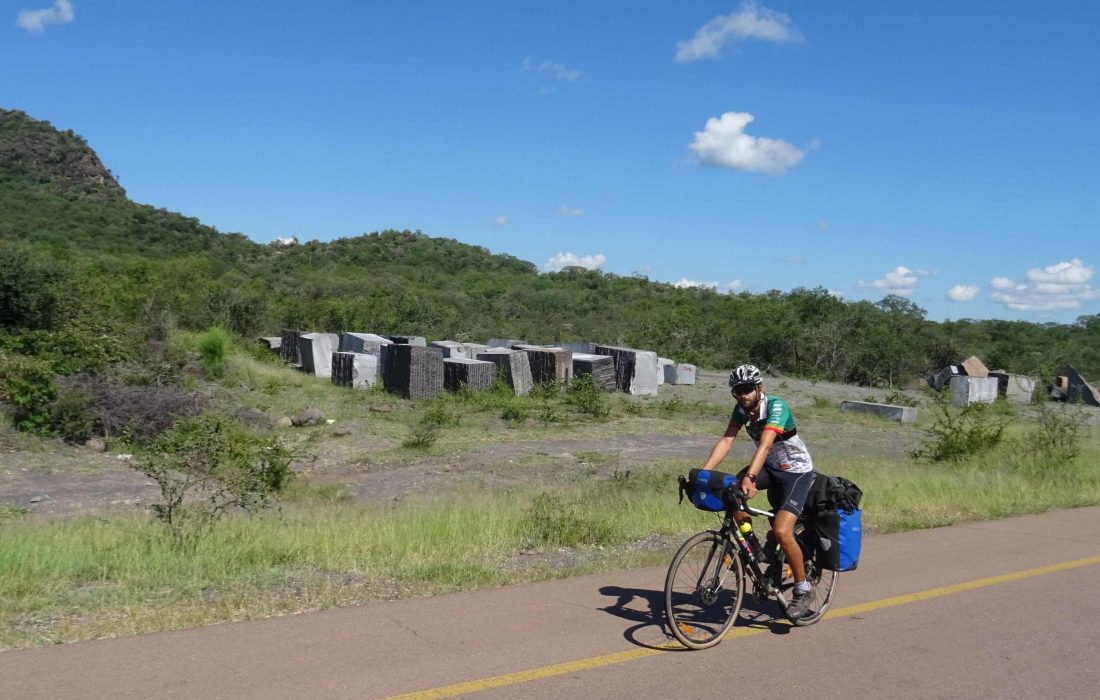 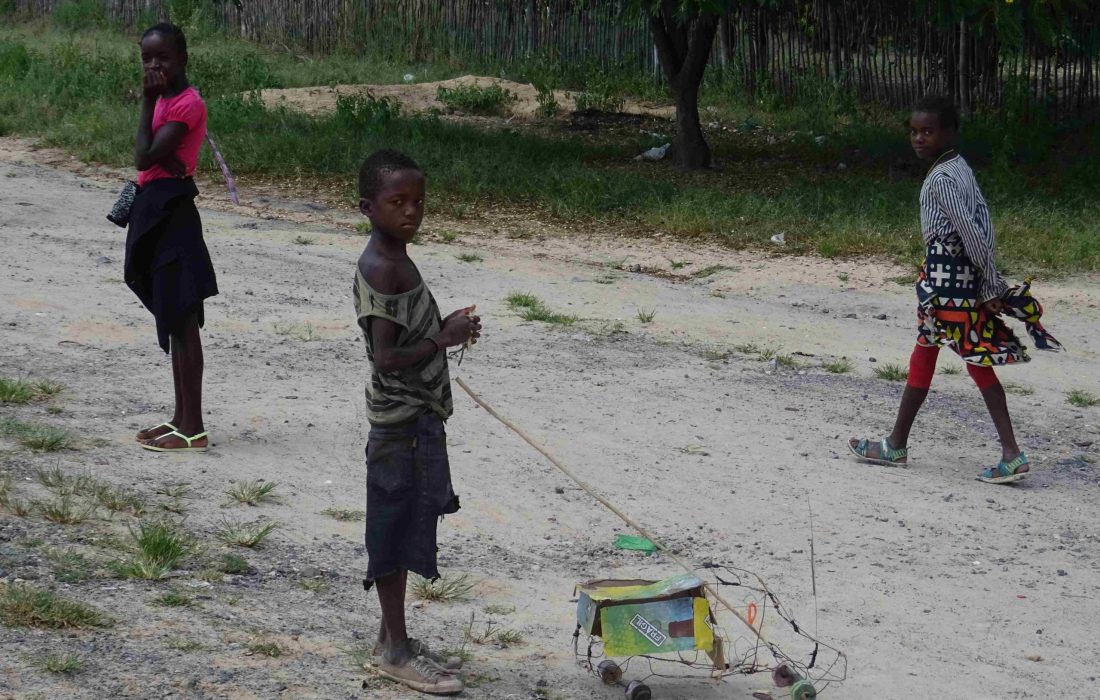 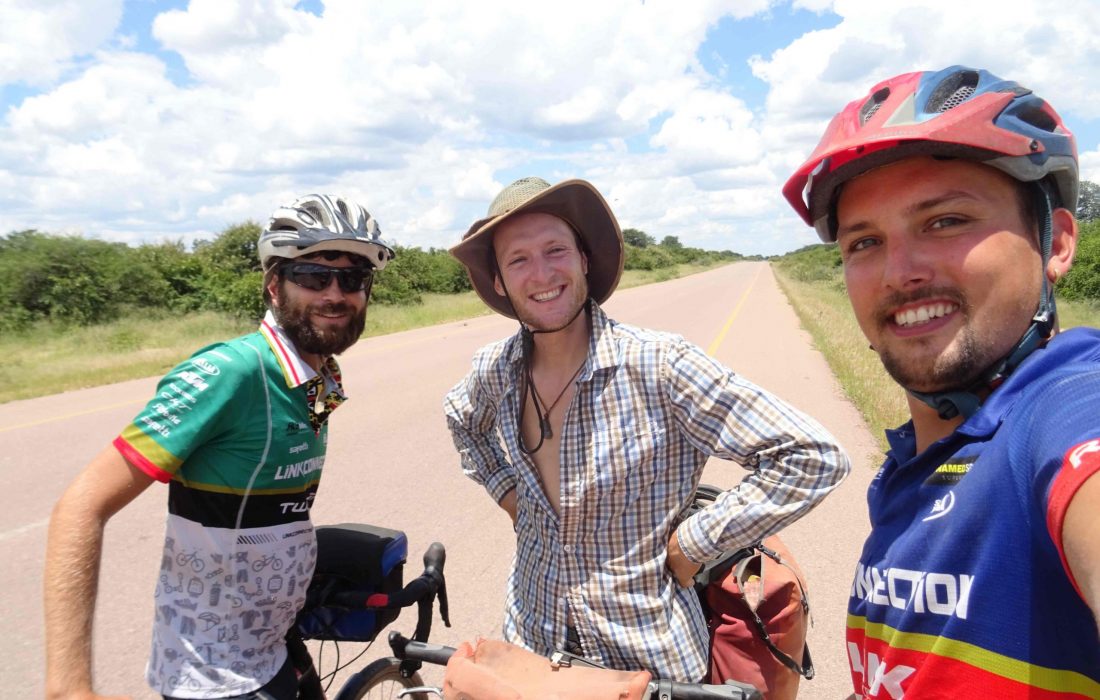 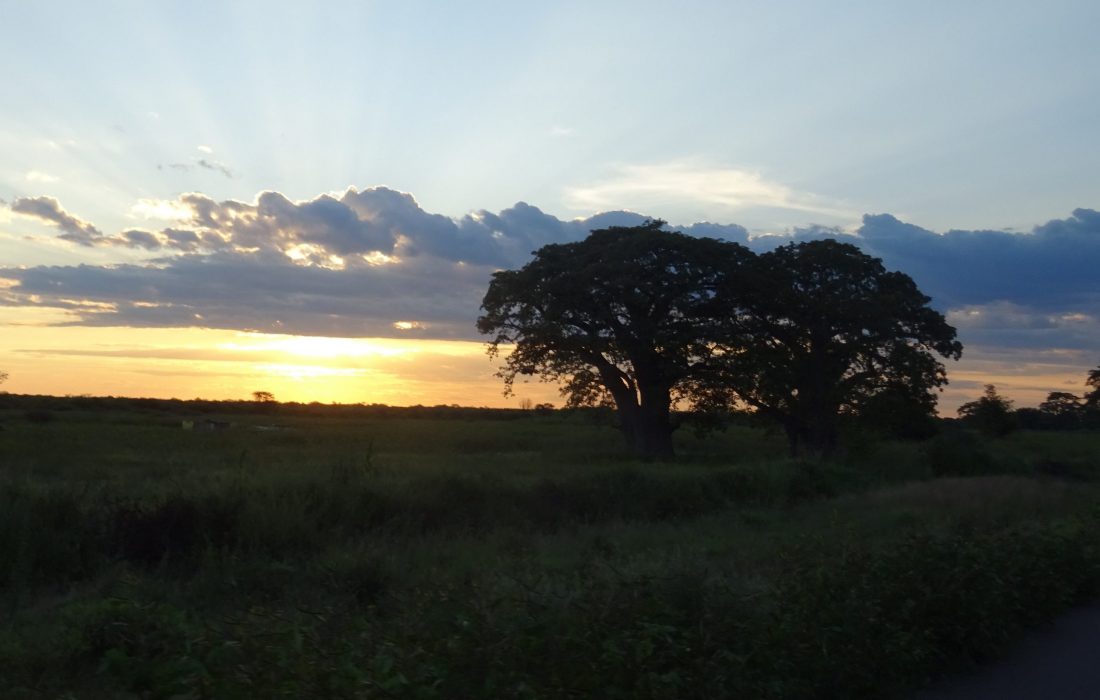 While Fabian repaired his flat tire, Adrian bought a water melon form a woman who passed by. Shortly after, a young woman approached us and was interested to meet us. We always think it is very brave when young Africans come to our camp and ask us questions.

Due to the heavy rains, all rivers overflowed and many villages and meadows were under water. Last year, there was no rain at all and this year there are floods. The badly constructed houses made of wood, mud or tin, are definitely built for that much water.

A friend of Janet invited us to stay at her place in the border town to Namibia. Jackie, an emigrated Englishwoman, told us about the civil war, which lasted around 30 years and the difficulties in daily life. Already on the way we spotted many rusty tanks and military vehicles from that time.

Jackie and her husband Tomas offered us each a hotel room with diner and breakfast. We were completely surprised about this generosity and enjoyed the unexpected luxury a lot. 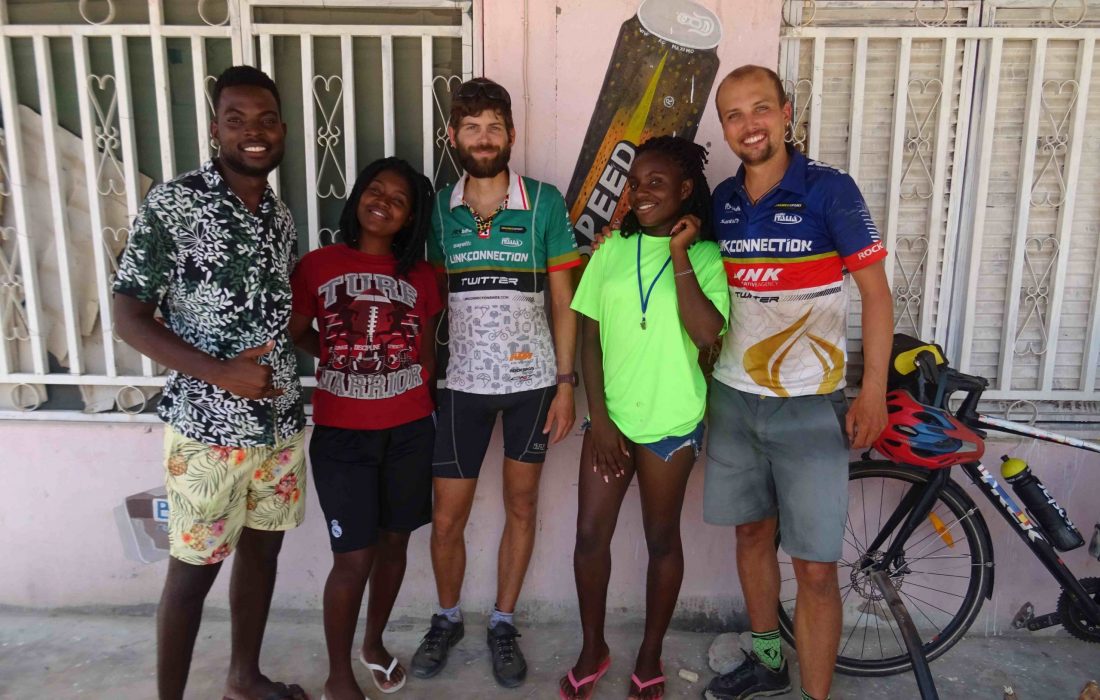 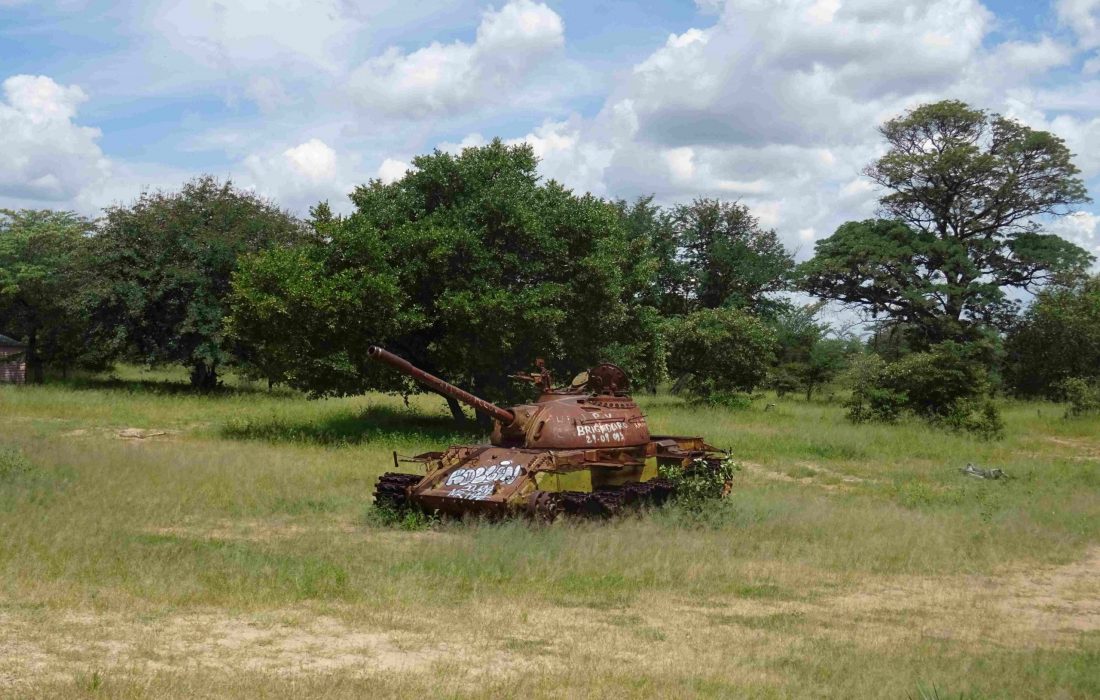 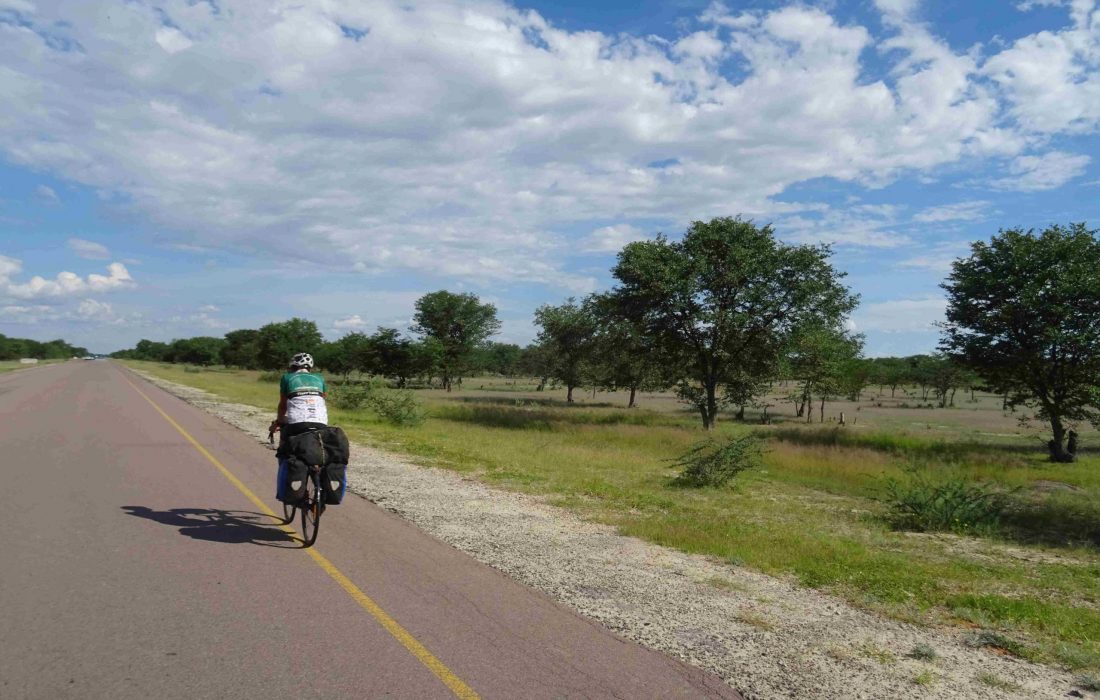 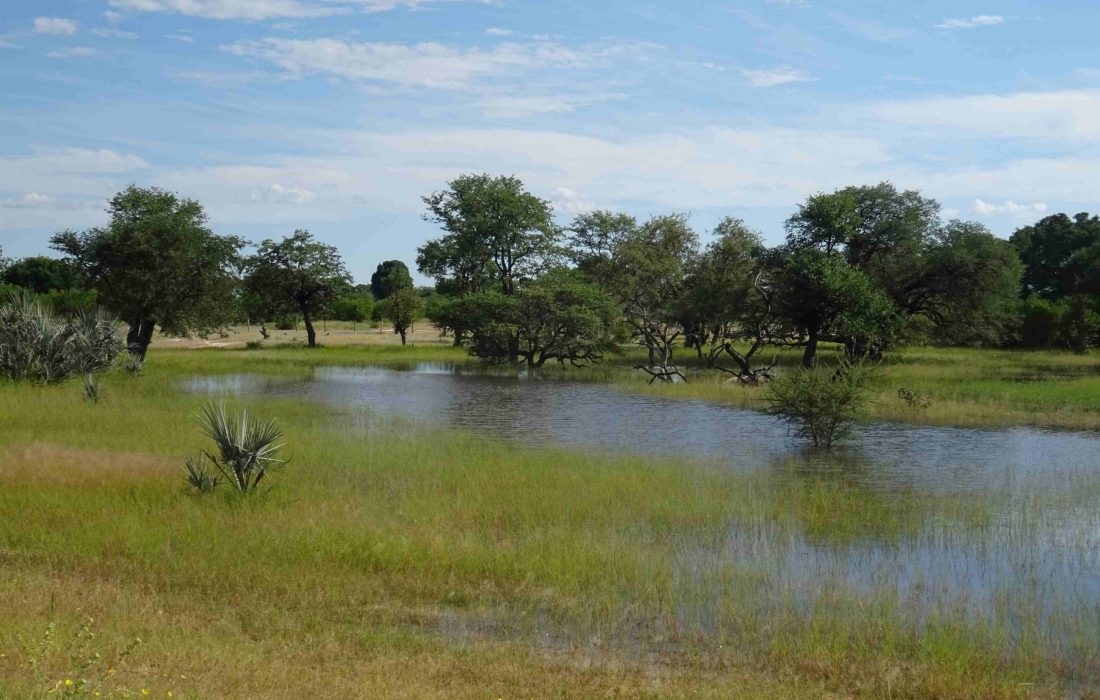 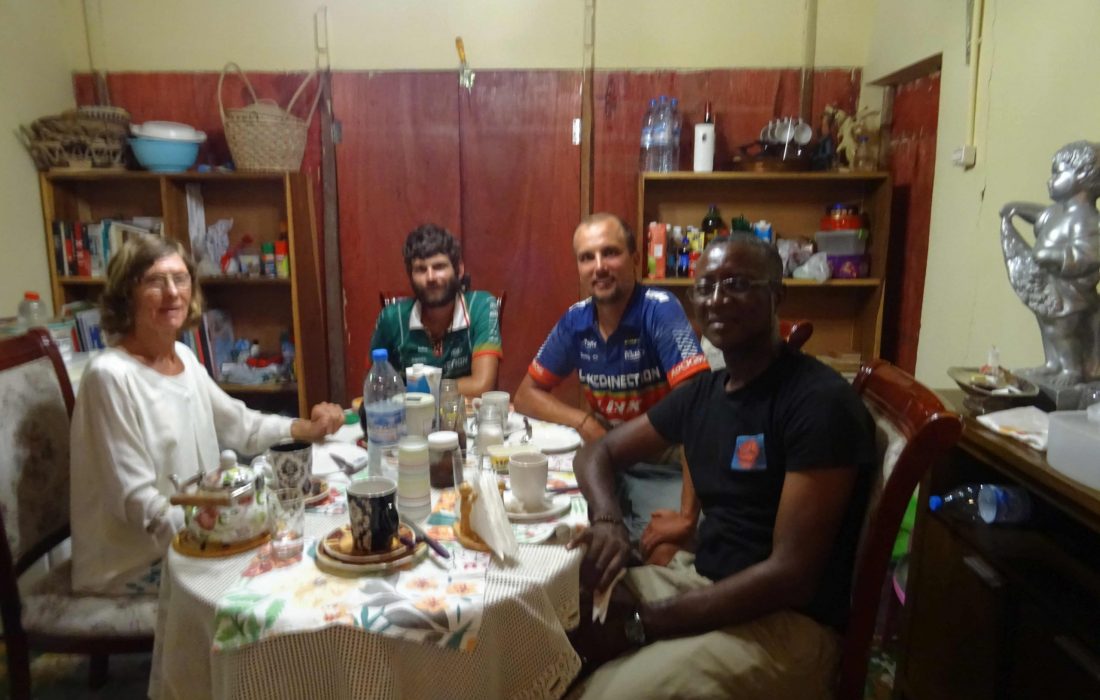 After a relaxing night in the air-conditioned room, we left the generous couple and pedaled to the border. At the border, we bought many snacks with our remaining money and then we got our exit stamp.