When we left the large city, we as non-smokers compensated the non-inhaled pollutants of a year in a heartbeat. The old transporters exhale an unbelievably large and black smoke cloud each time when they set off. Therefore, we sometimes could hardly see where we go.

During the first break after more than 70 kilometers, we already felt the overacidification of all muscles on our legs. Maybe it would have been better, if we started a bit gentler after a break of almost two weeks… 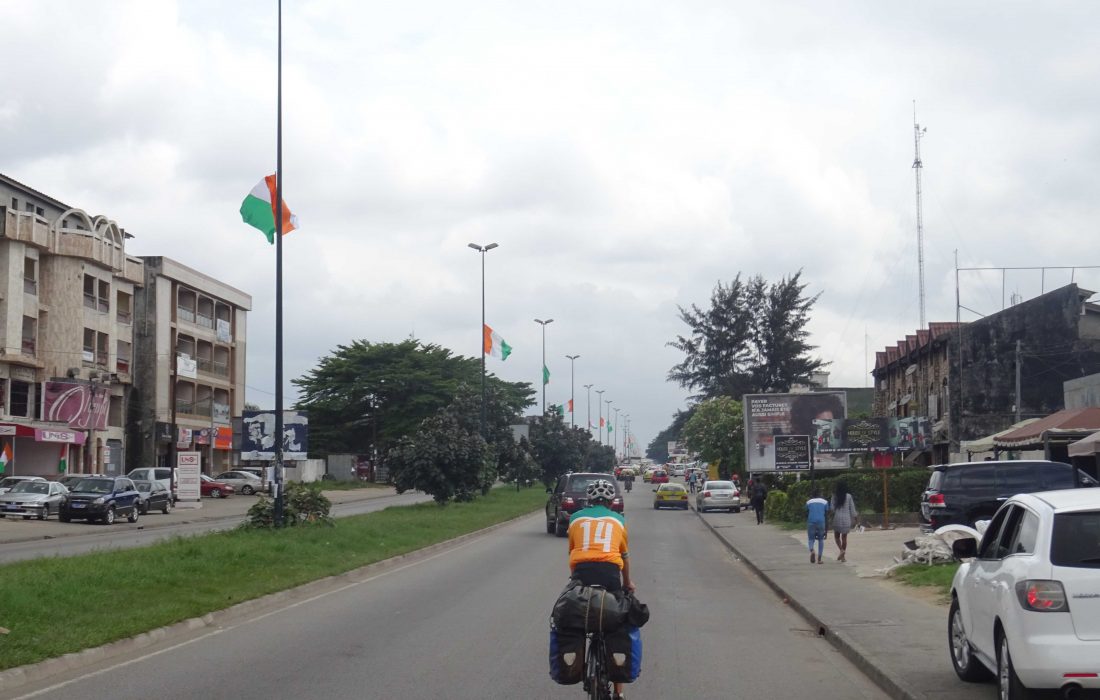 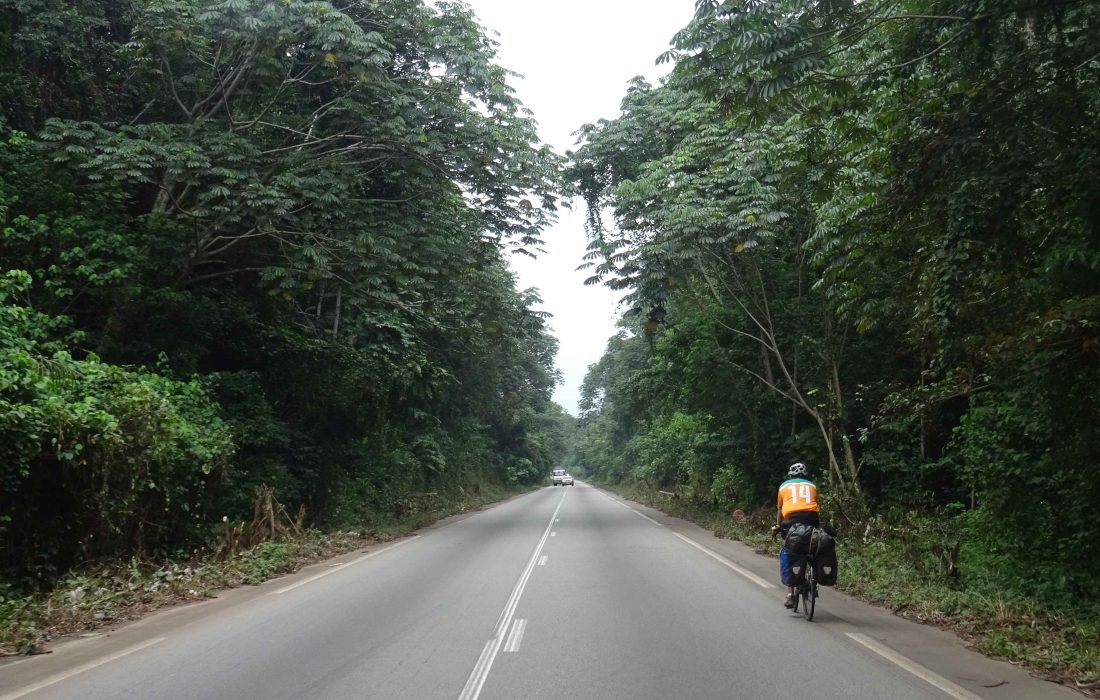 A boy, who sold grilled corncobs and self-manufactured coal with his father not far from our camp spot, woke us in a rude manner in the early morning. He shook Fabians leg and said: “les vieux, les vieux”. In our mentality, this behavior is extremely impolite, but in Africa, it is normal and consideration for others is non-existent.

We continued cycling through secondary rainforest and there were more cars and trucks on the road than we expected. Repeatedly, trucks full of huge logs made of tropical timber came towards us and we asked ourselves where there are such mighty trees left in this country.

Suddenly, an off-road vehicle stopped and a man eagerly signalized us that he wanted to talk to us. He introduced himself as Jean-Claude and the president of a bicycle club in Abidjan. Extremely interested, he asked us many questions about our journey and took a couple of pictures with us.

Despite the roads getting steeper, dozens of men and kids came towards us on a bicycle. Most of the time, the old, rusty bicycles were loaded as high as possible with firewood. In addition, we saw cyclists transporting bananas or palm leaves the same way. On the side of the road, we saw how a group of boys grilled entire animals. There were rats, pangolins and different larger rodents. For lunch, we randomly ate “Fufu” with a piece of meat from a gazelle. 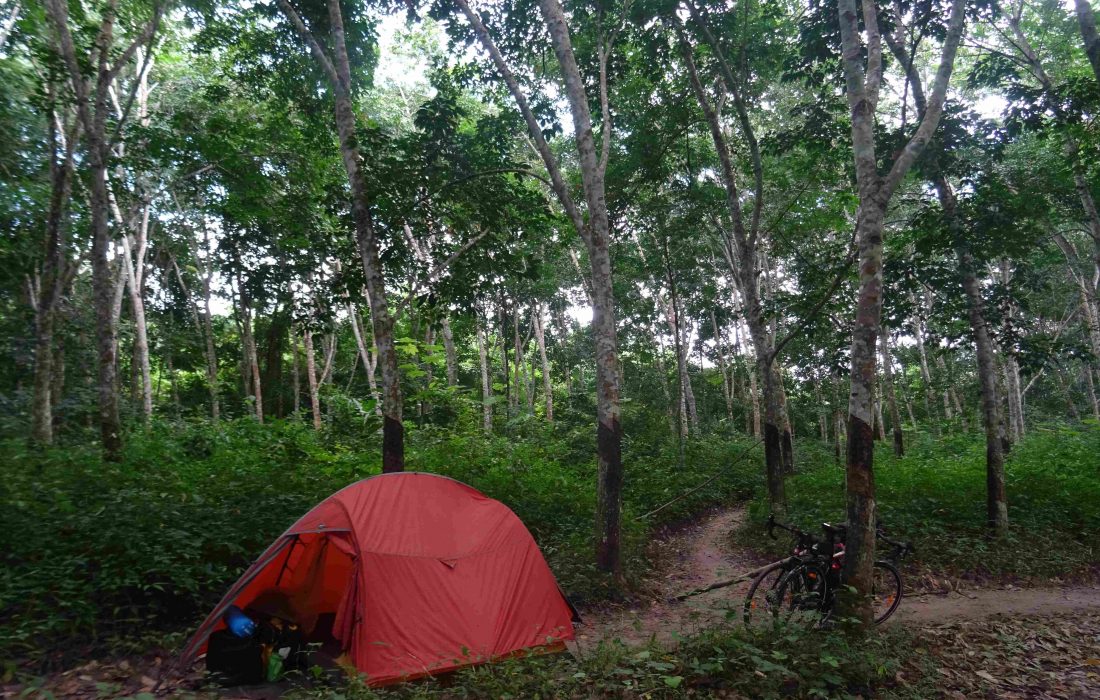 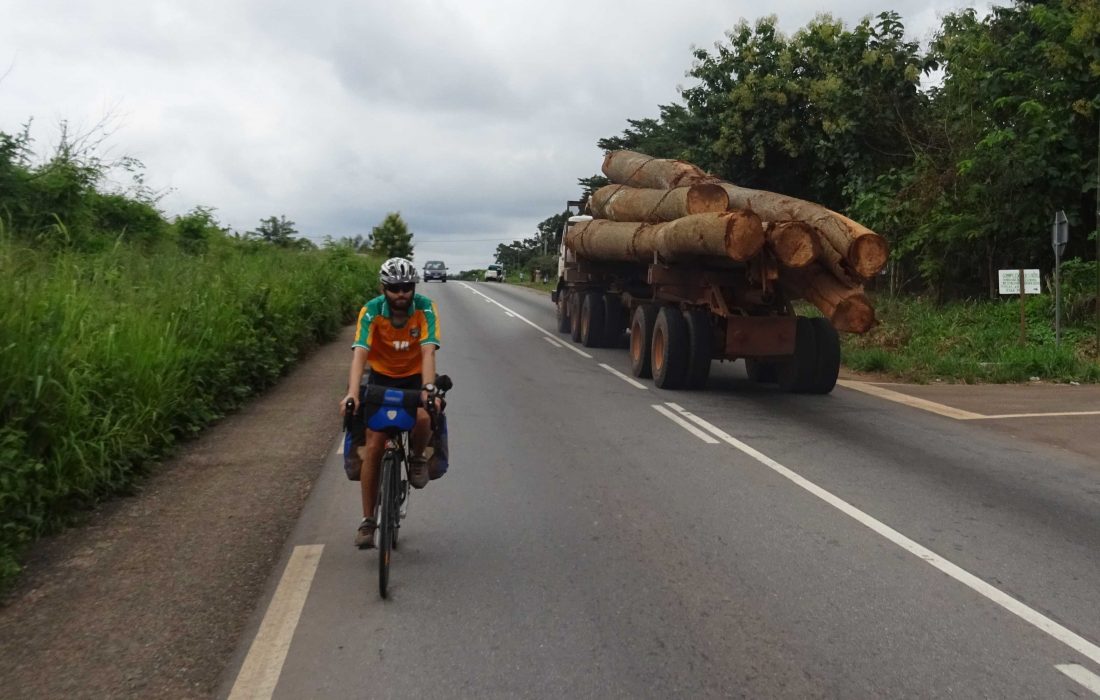 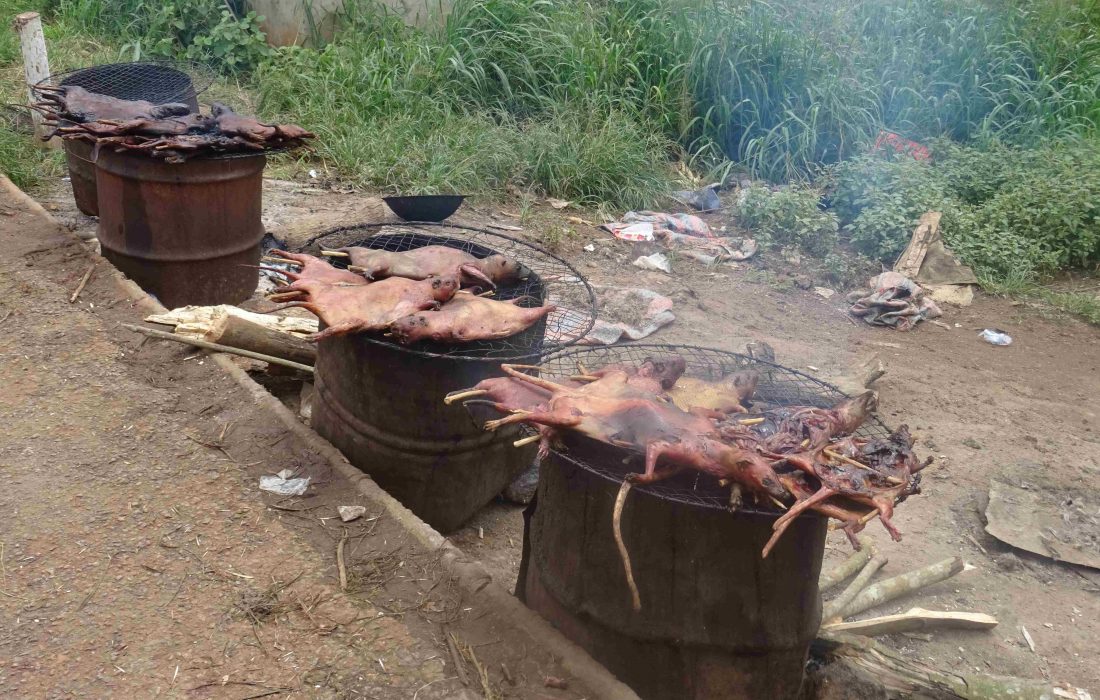 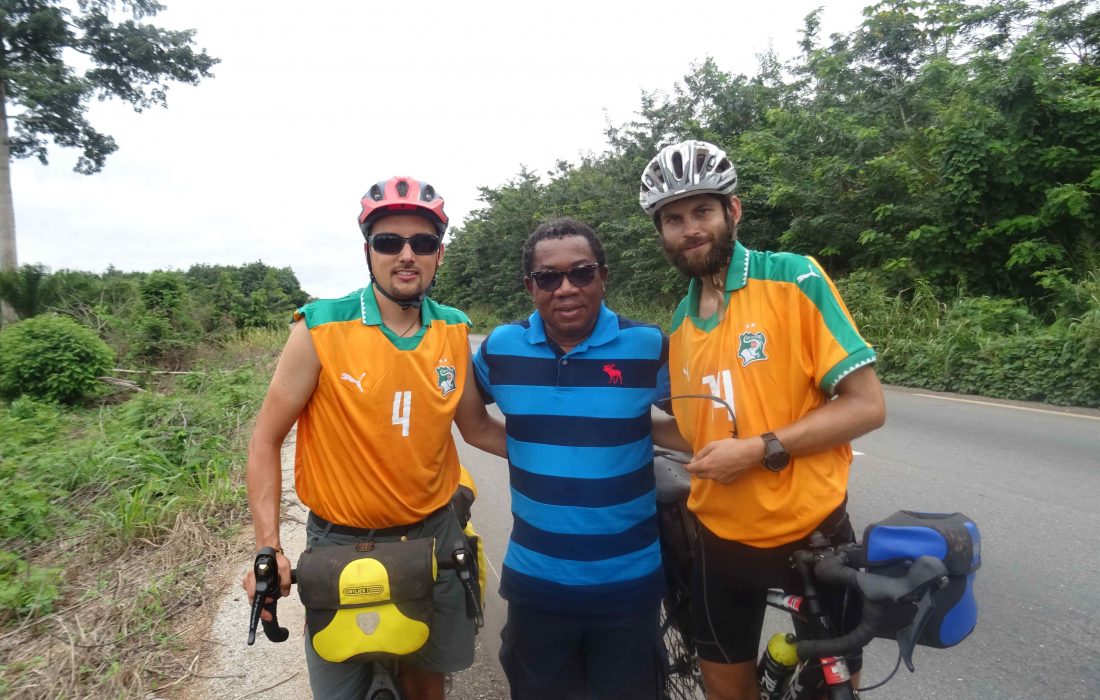 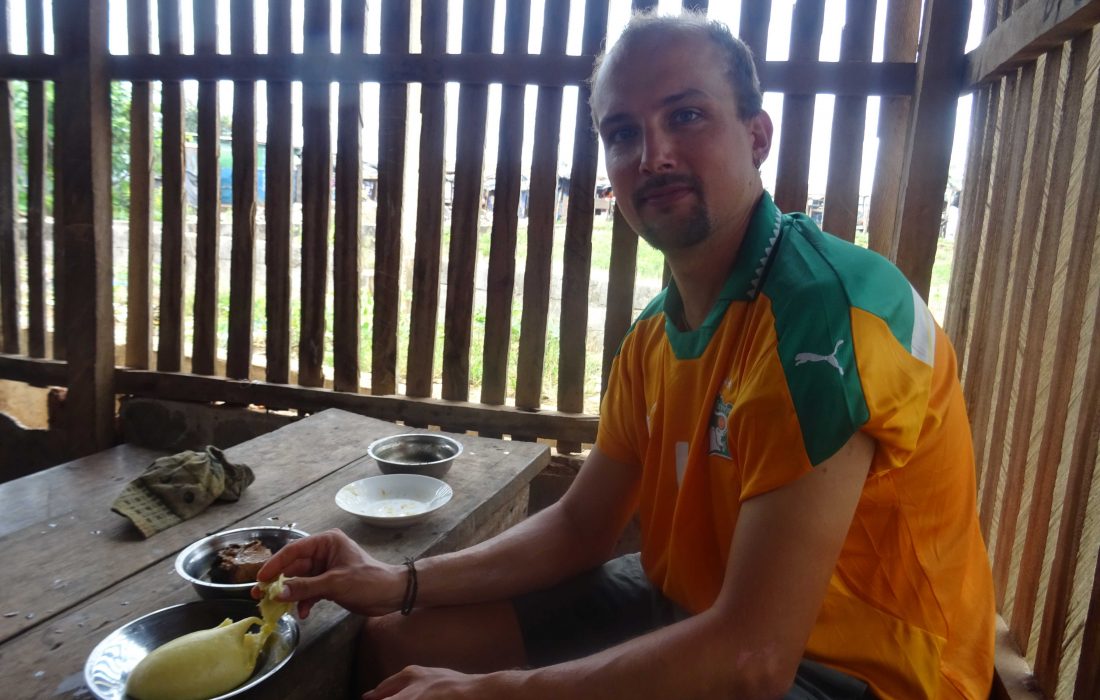 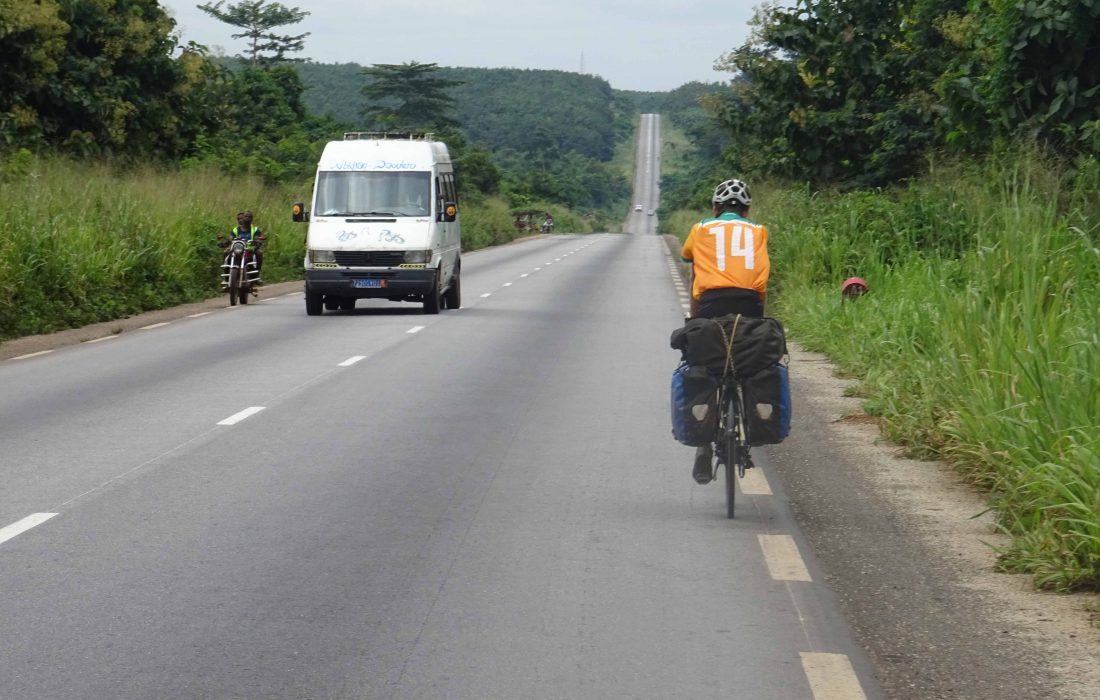 The roads were almost empty, since it was the most important Muslim holiday, called Tabaski and we enjoyed the nice tarred road for ourselves. Already the day before, we saw that men slaughtered cows and sheep everywhere for the holiday. In every small village, we heard music played in many houses and sometimes there even very loud music emerging from the bush, as if there was a disco. All people, Muslims or not, were in a good mood and greeted us even more enthusiastic than other days.

In a small village, we asked for a restaurant, since we could not find one and a family promptly invited us for food. A woman served us, as the tradition determines, fresh sheep liver on a delicious onion sauce and rice. The owner of a nearby shop even offered us soft drinks and we felt like special guests.

It is touching to see how Muslims and Christians in West Africa celebrate religious holidays together and living in the same community seems to be no problem at all. Sadly, in Europe we are far from this mutual respect and acceptance. 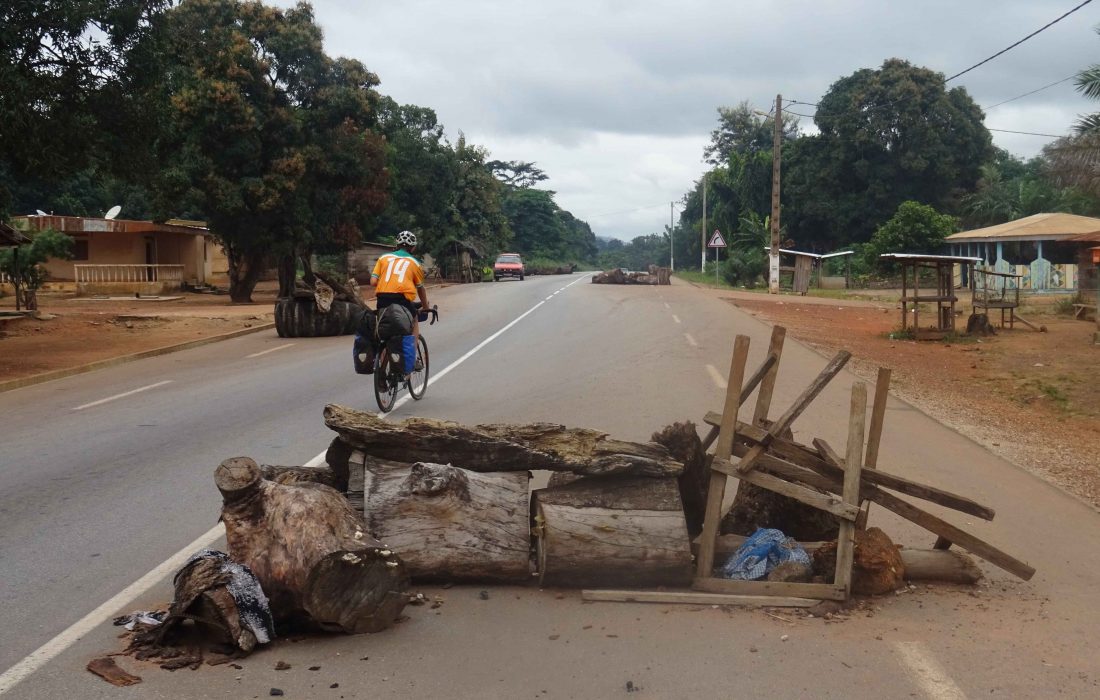 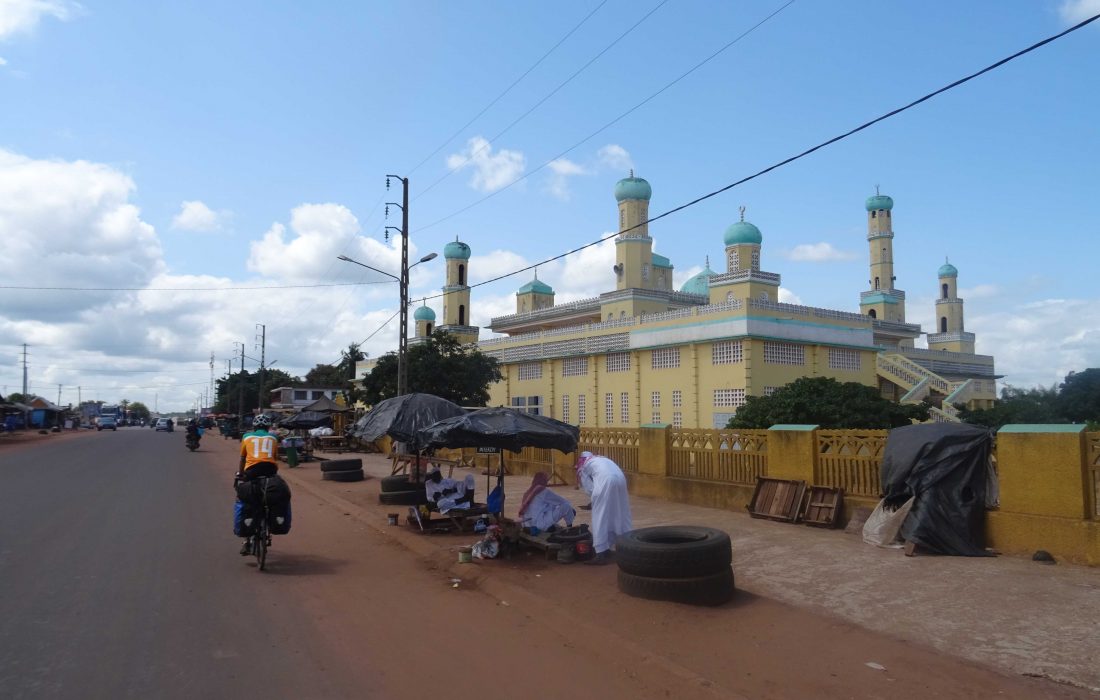 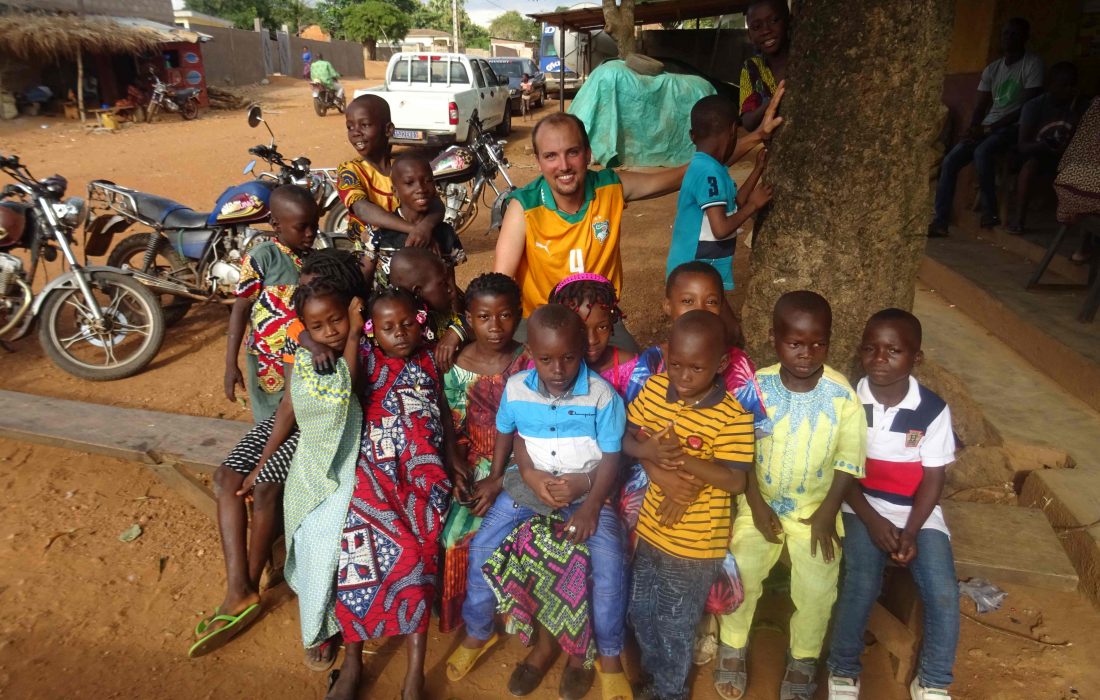 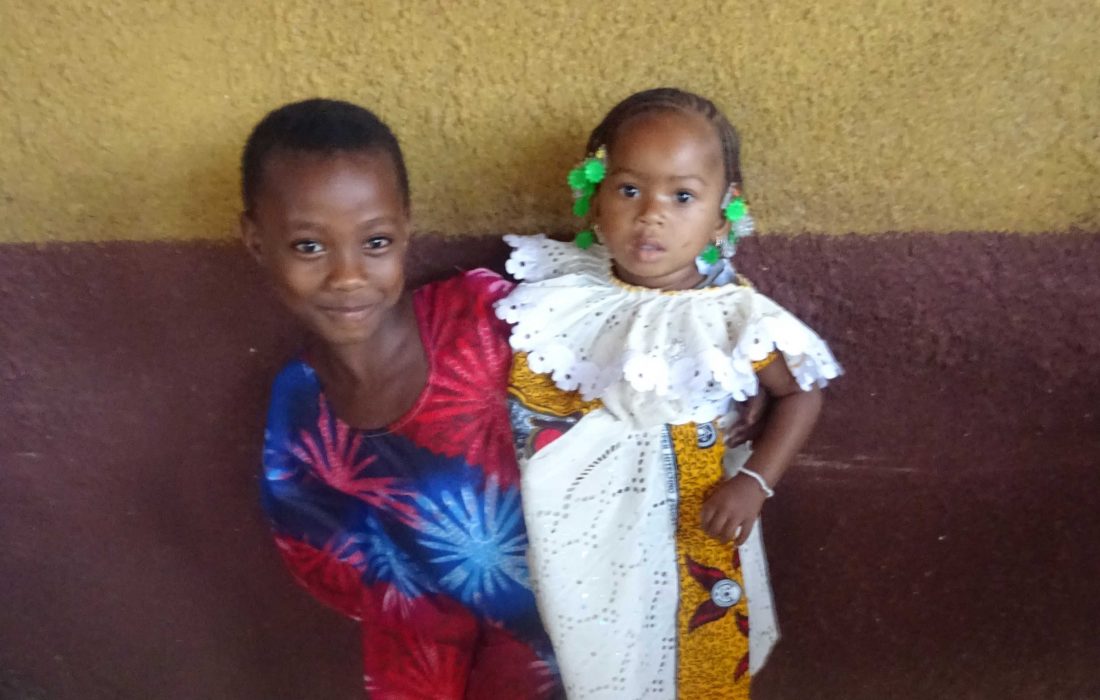 We said goodbye to the nice family, after we demolished the already prepared breakfast and left them to their party. The many climbs and downhills stayed with us and the sweat came out of all our pores. Generally, we had the feeling that the humidity increased again in the last few days. Even with a dark sky, we sweat like being in a sauna.

After the countries Liberia and Sierra Leone, where aid projects were omnipresent and almost every small village had a well with a pump, the situation in Ivory Coast is different. Modern wells are seldom and the old draw wells are mostly uncovered when not in use.

Birds’ twittering and rustling small animals woke us up in our hiding place relatively deep in the forest. In a nice, authentic restaurant, the mother of a beautiful, young woman asked us in a direct way if one of us is interested in marrying her daughter. Finally, we found out that we as non-Muslims were not the right candidates anyway.

During the last few weeks in Ivory Coast, we had many nice encounters and the hospitality overwhelmed us once more. Unfortunately, the landscapes on our route were dominated by many plantations and therefore rather monotonous. Ghana, the next country is waiting for us and we are already excited what kind of surprises this even more developed country offers to us.